According to a release, the two-year agreement will see Betway and G2 Esports collaborate on a series of fan-focused promotions focused on ‘encouraging growth across multiple channels’. This includes conducting and co-creating show matches, live streams, fan activations, giveaways, and a variety of other video content.

G2 Esports will join the likes of several prominent organisations that have established a partnership with the online gambling operator, such as FURIA, MIBR, PSG Esports, and BIG Clan. This lengthy list of team agreements also includes the Swedish-based Ninjas in Pyjamas, which Betway has partnered with since 2016.

With regards to its recent influx of team-based deals in the space, Adam Savinson, on behalf of Esports at Betway, told Esports Insider that these agreements help the bookmaker ‘give back’ to the esports community they are engaging.

“Partnering with global powerhouse teams like G2, allow us to access their superstar players, giving us more ammunition to give back to the community through market-leading content,” said Savinson. “With each landmark partnership, we also associate ourselves with the brands that the audience loves, making sure that we are supporting the industry and pushing esports forward.” 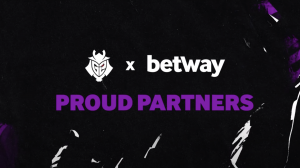 Juggling multiple team partnerships begs the question of how such deals can be differentiated from one another. For Betway, it’s said to all be in the execution.

Savinson highlighted G2’s strong attention to detail when activating partners, further elaborating by noting that its agreement with the Berlin-based squad is rooted in a ‘distinct and innovative activation plan’ tailored specifically to its fanbase.

He explained: “Every team is different, and we have worked extensively with G2 to create a distinct and innovative activation plan that works specifically for their fans. With each new Betway partnership, we really try to push innovative marketing to the next level, and you will see that exact same focus on audience engagement throughout the sponsorship.”

As for G2, its partnership with Betway will serve as the first gambling-based agreement since 2018. Back then, the organisation had teamed up with ESP.bet for its initial foray into esports betting and fantasy.

“There is currently a lot of work going on behind the scenes, but what I can tell you is that our partnership is set to be a lot of fun,” added G2’s Founder, Carlos ‘Ocelote’ Rodriguez. “We’re focused on developing a whole host of unique experiences that allow our fans and the wider community the opportunity to experience esports in a way they have never done before.”

When the pandemic outbreak struck over a year ago,  esports was one of a small handful of live sports left standing. This brought esports betting into the limelight, causing notable surges in volume and giving operators far and wide reason to give the category serious consideration. For Ocelote, the temperature towards having betting operators become a more ingrained piece of the ecosystem has warmed up considerably.

He said: “There’s been a greater focus on esports over the past year, and the industry has embraced the existence of betting as part of the ecosystem. There are different attitudes towards betting across the globe – in Europe it is well established, and in the US it is growing in popularity. It’s becoming a huge part of the entertainment that happens around the esports industry and it is exciting to be a part of this.”

Savinson added that as the scene matures, the call for legitimate gambling sponsors is rising as fans become increasingly more concerned about protecting their industry from bad actors and shoddy wagering platforms.

In addition to the many content and fan activation components planned between the two, it’s said another ‘key aspect’ of the venture will be to educate people on responsible betting.

Esports Insider says: G2 Esports is one of the most animated brands in the space, and Betway has long proven to be a market leader with means of executing a winning marketing strategy around these types of team deals. We foresee this partnership being incredibly fruitful for both parties as they look to build both audiences and further advance responsible gambling as a means of underpinning the industry through its maturity.