It’s no surprise at this point that United States rollouts of 5G networks haven’t delivered on the next-generation cellular standard’s promise, as T-Mobile and AT&T launched low-speed 5G service, and Verizon’s higher speed network remains barely available. But the performance gap between U.S. and international 5G deployments is growing, a new Opensignal report shows today, and there’s only one piece of good news for American consumers: 5G service is becoming more widely available across the country, mediocre or not.

The new report presents a sobering look at the average 5G download speeds across the globe, with South Korean users seeing 5.3 times faster average 5G speeds than 4G — 312.7Mbps — with Australia (215.7Mbps), Taiwan (210.2Mbps), and Canada (178.1Mbps) not far behind. Saudi Arabia’s 5G gap is even more pronounced at 14.3 times the speed of 4G, averaging 414.2Mbps, but in the United States, the difference is a mere 1.8 times, and slow in both cases: 28.9Mbps for 4G, versus 50.9Mbps for 5G. Average U.S. 5G performance was actually slower than in the last Opensignal study, published in May, while other countries increased their download speeds.

Consequently, users in several countries have faster 4G connections than the average U.S. 5G speed, which is also the lowest of any country in the Opensignal report, with the worst combined 4G-5G download speed for 5G users — 33.4Mbps on average. The Netherlands was the second slowest 5G performer, but still delivered average 5G speeds of 79.2Mbps, over 55% higher than the U.S. 5G average, with combined 4G-5G speeds of 68.9Mbps. 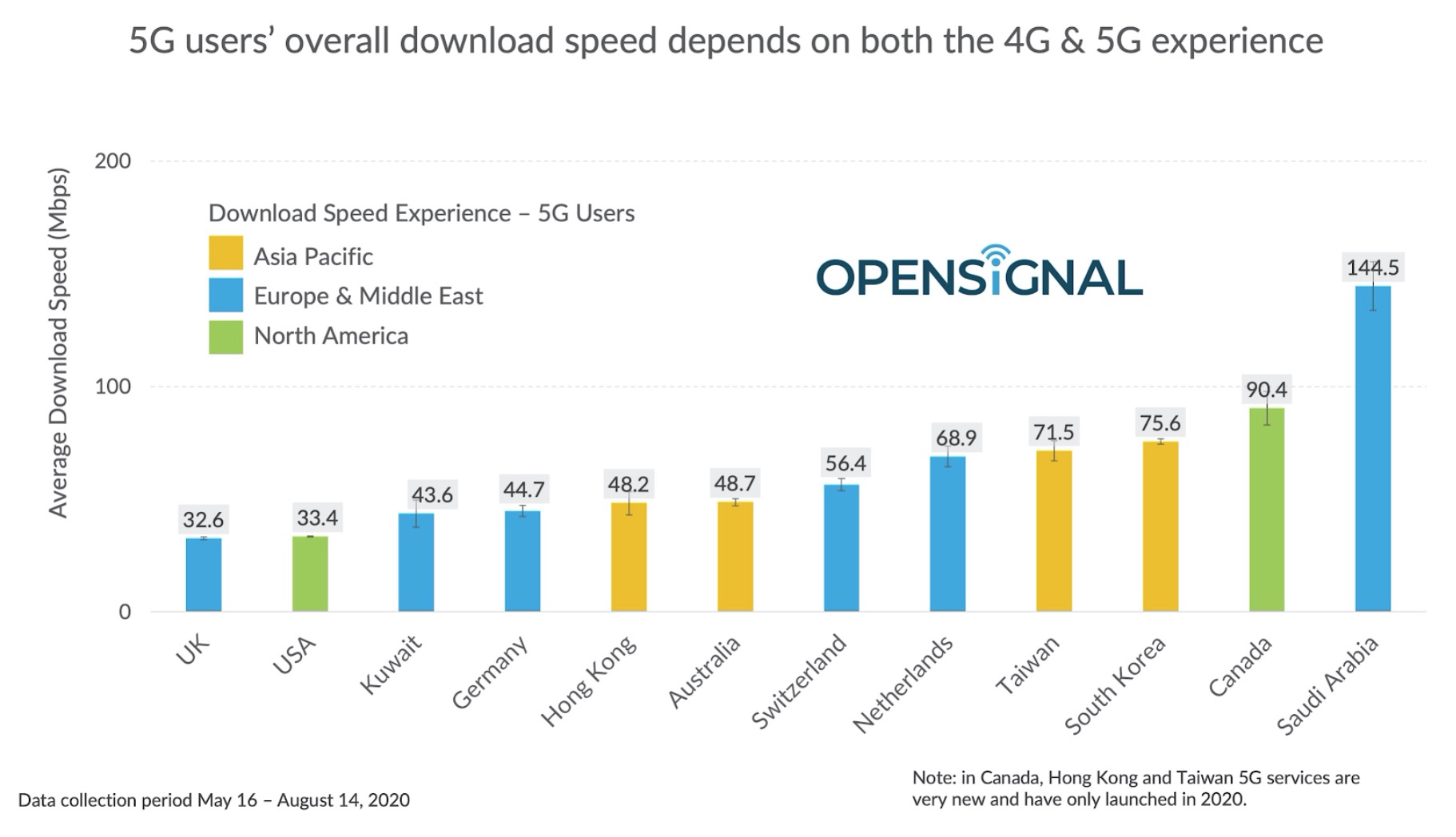 While this performance is attributable to a combination of carrier decisions and limited U.S. availability of mid band spectrum, issues that will likely be addressed in 2021 and 2022, this is far from the first time the U.S. has lagged in cellular speed by comparison with other countries, and historically, it hasn’t meaningfully caught up over time. That’s hugely concerning for 5G’s future, as slow networks could preclude U.S. customers from enjoying high bandwidth, low latency 5G services such as mixed reality streaming, industrial automation, and autonomous interconnected vehicles, to name just a few applications.

It could be worse, though. U.S. 5G availability is growing thanks to widening low band rollouts, and users now have 19.3% 5G availability, ranking above seven of the 12 geographies Opensignal charted. The only listed countries with higher percentages of 5G availability were much smaller states such as Saudi Arabia (34.4%), Kuwait (29.1%), Hong Kong (26.1%), and South Korea (20.7%), though large and fast 5G adopter China was notably absent from the list, likely due to challenges with data collection in that country.

By comparison, the United Kingdom ranked dead last on this metric, with only 4.5% 5G availability, meaning that customers are far less likely to actually get 5G service there — a problem created largely by its decision to abandon Huawei’s controversial 5G networking hardware. But where users get 5G in the U.K., the average download speed is 133.5Mbps, 2.6 times that of the U.S.

Phones with 5G functionality are available across the world, and expected to see a major uptick in adoption when Apple releases its first 5G iPhones later this year. Today’s study suggests that users should expect wildly different 5G experiences depending on their locations, with most surveyed countries seeing at least five times the performance of 4G, while others will barely register as generationally different this year.