As the cast of legends grows so does the lore available to the League of Legend player base. Of the 159 champions (as of the release of this article) there are many that have come into power through godly blessings, dedication, or even by accident. And then there are those born into nobility and royalty, who fight tooth and claw to hold onto their birthright.

There's no specific date available on the exact worth of each of these champions, but it's safe to say that none of them have to worry about their next meal.

The Ferros clan of Piltover is widely known to be affluent and influential, and since the death of her parents, Camille has found herself as the head of the house. As one of the most powerful clans in the prestigious city, it's up to her to ensure the balance is maintained. One of the sources of the Ferros' wealth is the production of artificial Hextech crystals, since Camille's aunt lost her arm stealing the real thing.

Using these crystals to power her body augmentations, and with her favorite niece as the face of the family, Camille remains in the shadows, serving other wealthy families and protecting the aristocracy.

On the other side of the aristocratic coin, vigilante Shauna of the Vayne family in Demacia has devoted her life to tracking down demons and practitioners of the dark arts. Since Evelyn wiped out her parents Shauna has similarly been the head of her own household, but uses her means to exact revenge. Though what may have started as the vengeance of a child from a broken home quickly became something much more sordid.

At sixteen, Vayne enlisted the teachings of a Frejlordian woman named Frey and roamed the Valoran lands with her to hunt down evil. In Frey, Vayne saw a mother figure and a respected friend, until she admitted to being a cursed shaman who learnt dark magic to protect her people. In one shot Vayne pierced her mentor through the throat and carried on searching for Evelyn with a smile. The combination of riches and revenge has made Vayne the ultimate heartless huntress.

A beloved king in ancient times, Omah Azir ruled the prosperous city of Shurima, expanding its presence across Runeterra. As a mortal human, he was taught to wield magic by the Ascended brothers Nasus and Renekton, and it was expected that one day the time would come for Azir to ascend as well after serving his kingdom to the end. However, in his hubris, Azir announced he would ascend much earlier and decreed all slaves freed during the ritual.

His own embittered slave Xerath shot Azir down from the Sun Disc, instantly burning up his body and causing all of Shurima to disintegrate into sand and ash. At his resurrection through Sivir's blood, Azir dragged his city and its inhabitants back to life above the desert, and there he reins as an Ascended God-King, swathed in gold and gems.

The wealthiest Chem-Baroness in all of Zaun, not much happens without Renata Glasc's say-so. Her parents had been too eager in their alchemical research, and their charity towards the sick had been noticed by those benefiting from the dying lower classes. And so Camille was dispatched to take care of the problem.

Using what was left to her, which was some unrefined research and business know-how, Renata rose up in the underworld to become a mob boss with her fingers in every pie. Over time the medicine her family had been killed for was used to barter for wealth and loyalty, and the poverty-stricken civilians were a source of free labor and invention, if they wanted to live.

These days Glasc Industries' products can be found in every shop in Piltover, something unheard of prior to Renata. It is said that necessity is the catalyst for innovation, and those that provide that necessity reap from the innovations.

This wouldn't be a list of the most wealthy champions if the king of Demacia wasn't included. A noble and proud warrior, Jarvan insisted on joining the ranks of his own army to prove himself worthy of his coming title. His great-grandfather, Jarvan the first, was killed by Sion when he was still mortal, and it's rumored Jarvan IV's blood was used to resurrect the bloodthirsty warlord.

Since the mysterious death of his father and his ascension to ruler, Jarvan has been obsessed with chasing down the mage Sylas. This released revolutionary plans on ripping apart the Demacian elite and is accused of regicide already. But Jarvan's charmed life gets even more brutal when he was stood up at the altar on the day he was meant to marry Luxanna Crownguard.

The Noxian empire is famous for its brutality and battle tacticians, but did you know that power is earned there through resilience rather than money? Katarina and Cassiopeia are the daughters of the brilliant General Du Couteau, who rose through the ranks due to his strength and fortitude in combat, and have since become Noxian nobility in their own right. Katarina, the eldest daughter, trained night and day under her father's tutelage to become a weapon to serve Swain and her empire.

Whereas Cassiopeia doted on her ailing mother and was brought into the ancient cabal, the Black Rose. There she learnt to deal in secrets rather than blades, and gave up her beauty to serve the true destiny of Noxus, which does not involve Swain. Both daughters are dangerous, and each fight for their own cause from a seat of wealth and power. 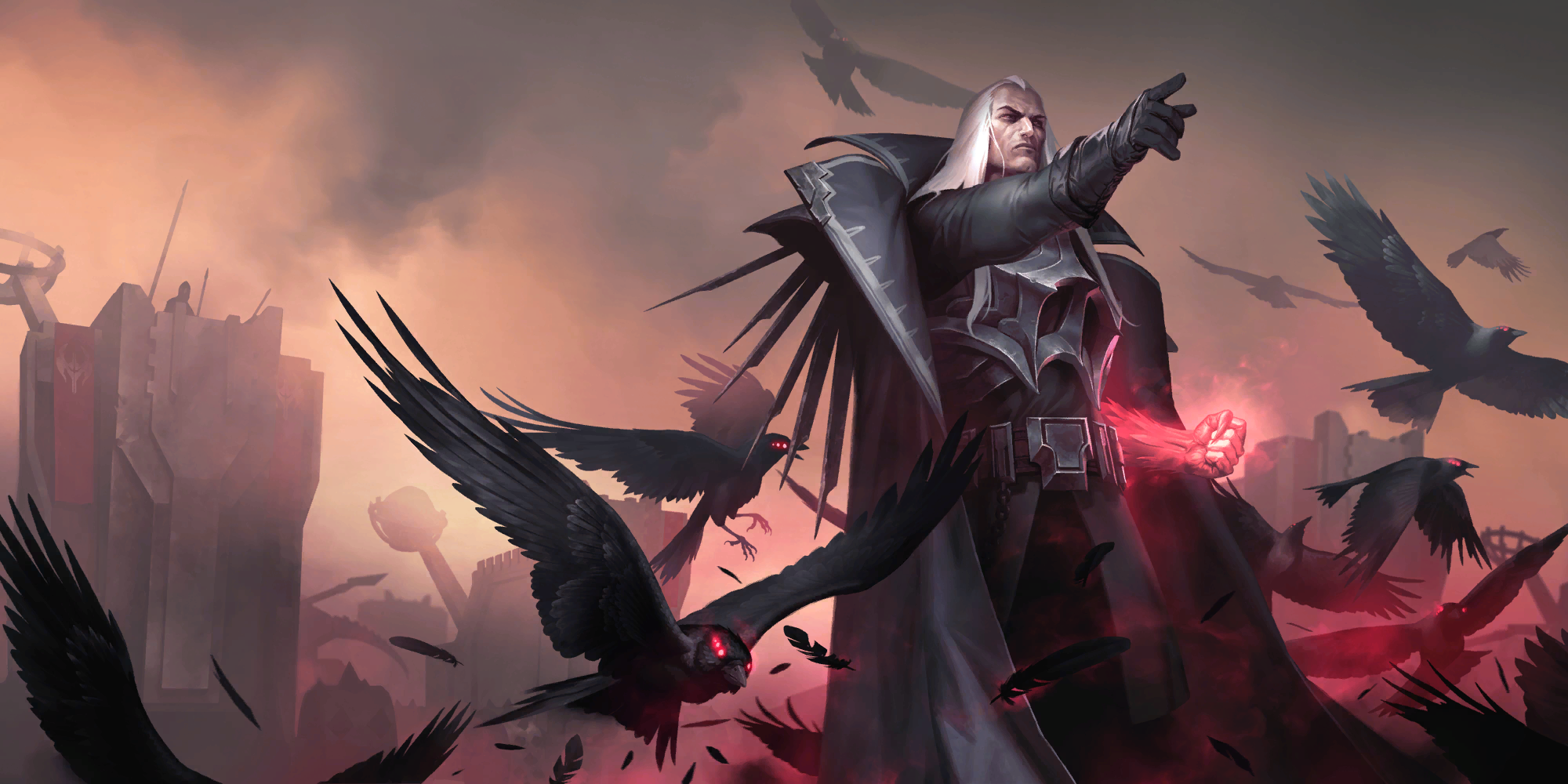 Noxus hasn't always been the pinnacle of inclusivity and attainability it is now. When Boram Darkwill took control of the throne after Mordekaiser's banishment by his own inner circle, the Black Rose, it was with the help of families such as the Swains. They were rewarded with wealth and status by the new ruler, who himself would be betrayed by Jericho Swain after the Ionian War. It was money and the discovery of Raum that led Swain to forming the Trifarix Council.

With his ravens whispering the secrets of the dead into his ear, and the power from his noble standing, Swain sits at the head of the Noxian council along with Darius and the Faceless One. But he can see that something terrible is coming, and it seems to be Mordekaiser shaped.

Another member of the Black Rose, but one who joined after the banishment of Mordekaiser, is Vladimir. His full name isn't known, nor much of his backstory before he came to Noxus. While mortal, he was heir to the throne of a land far away. When the Darkin War began he was traded as a hostage and learnt to wield hemomancy from the darkest of beings. Since then, he has influenced politics as a wealthy socialite and feasted on his followers as a deathless god.

Leblanc invited him into Noxus, and he joined her in running the Black Rose where he has his own Crimson Circle; youths he has taught blood magic to and who worship him in return. Traces of a ruthless, pale individual appear throughout historical texts, hinting at Vladimir's influence in every century. 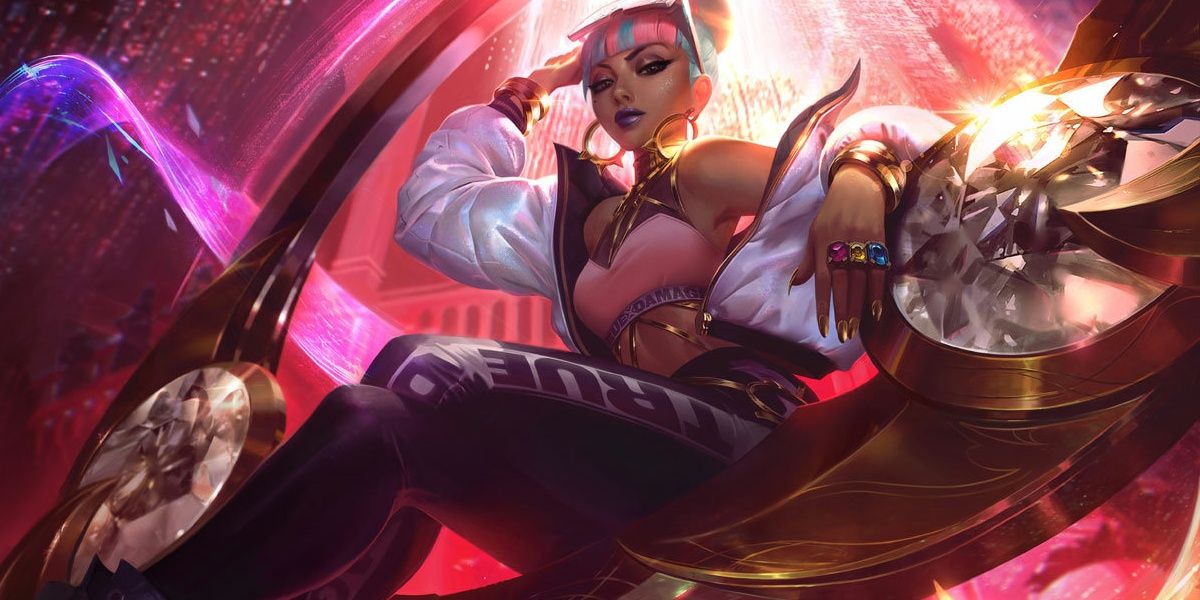 The Empress of Elements, Yun Tal Qiyana or just Qiqi, she schemes to surpass her siblings and reach the ruling seat of the Ixaocan Empire. There are many provinces in Valoran with their own royalty, and the deep jungle of Ixtal is no different. Here tradition is everything, and Qiyana had no chance of actually being an empress as her nine older sisters stood in the way.

Despite being a prodigy in the fighting style her parents forbade her from using her power against invaders, even imprisoning her at one point. Qiyana is still the emperor's daughter though, and benefited from the most prestigious training. She vows to rule over Ixtal one day, against the traditions she was brought up in.