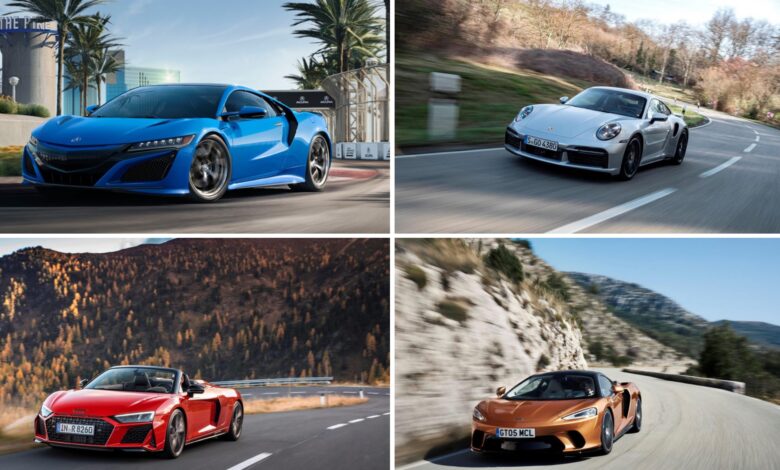 The motoring scene has long been divided into various categories to suit the tastes and needs of different clientèle, but one segment truly embodies what it means to be a car enthusiast – supercars. Many brands have stuck their fingers in this high octane pie and found it too hot to handle, but those that have figured out the recipe for success include the likes of Porsche, McLaren, and Audi like those listed here. Each has at least one model within this classification, while others focus exclusively on developing such beasts.

So those not in the know might be wondering, what makes a supercar so special, and what sets it apart from a sports car? To these people, the differences may not seem so definitive, but suggesting so to a true fan would be anathema. Most cars don’t really stand out all that much from one another, with similar design cues shared among siblings within a brand, and specs matching that of just about every other motor on the road. Sports cars are primarily just higher-performance variants of the standard fare, like the M models from BMW or Mercedes’ AMGs. By comparison, supercars stand above these as uniquely styled machines with optimal performance and luxury as their goal. They are also generally absurdly expensive, with only a very select few coming in under the $100k MSRP mark.

A relatively new term in the industry is hypercar, and while there is some contention over exactly which vehicles fall into this category, it is generally accepted that they are the crème de la crème of all automobiles. Their performance is unmatched and very few are ever produced, which explains their absolutely ludicrous price tags – often costing several million dollars per unit. So, with that busywork out of the way, let’s look at some of the best supercars available on the market in the USA right now. 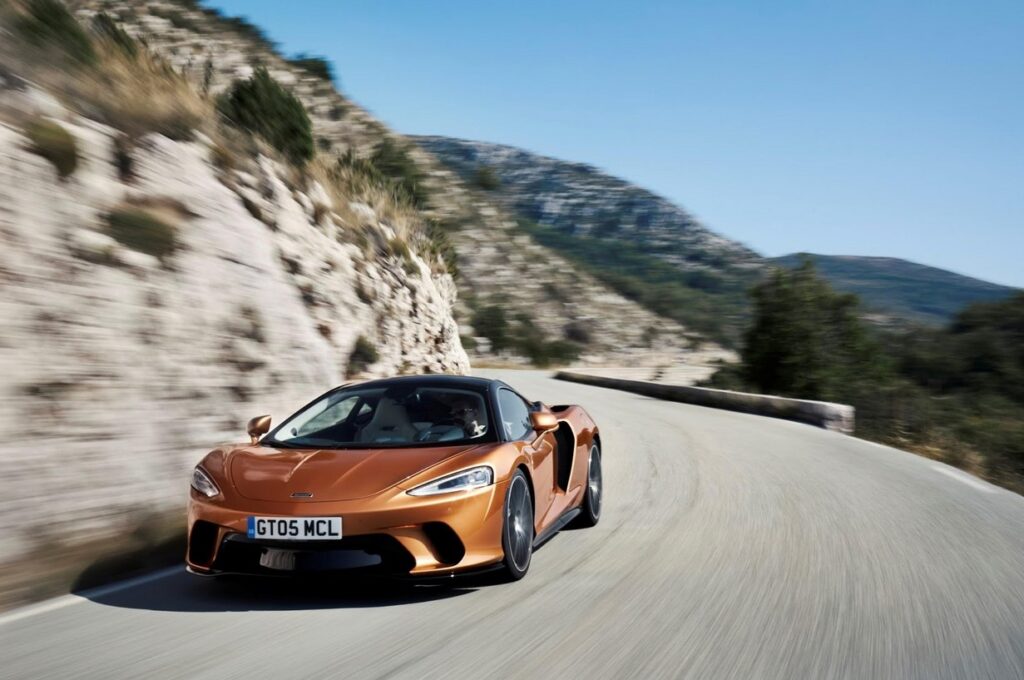 A somewhat unique proposition from the prestigious British brand, the GT is an interesting amalgamation of supercar performance and daily liveability. The fact that it still costs significantly more than some rivals that focus purely on speed and handling only proves just how exceptional it is.

To optimize weight balance, the 4.0-liter twin-turbo V8 sits squarely in the middle of the chassis, while the majority of the body is constructed from carbon fiber, meaning it tips the scale at a mere 3,384 pounds. Thus, the 612 horsepower and 465 lb-ft of torque is more than enough to make this grand tourer a speed demon, with a 0-62 mph sprint of just 3.2 seconds.

As stated, McLaren tried to make the GT a decent daily driver, too. So while it may handle just as well as its track-focused brethren, it offers far superior comfort on the road. The only black mark against it is that it doesn’t hunker down and grip the road as well as the 720S, for example. But the fact that it has usable cargo space, with a total of 20.1 cubic feet split between the front and rear trunk, makes it hard not to love the gorgeous Brit. The German automaker is practically an institution in the supercar world, but it stringently defies the adage that you cannot teach an old dog new tricks. The brand-new 911 Turbo has somehow improved upon perfection to turn the beloved nameplate into an irresistible treat for car lovers.

The twin-turbo boxer-six engine is placed in the rump of the curvaceous Porsche, developing 572 hp and 553 lb-ft on the base model, and 640 hp and 590 lb-ft on the Turbo S. The extra power doesn’t make a huge difference in sprint times, but those who want the best track times will happily shell out an extra $30k to shave that extra tenth of a second off the standard 2.7-second benchmark.

Courtesy of its low-slung design and all-wheel drivetrain, the Turbo boasts some truly incredible road gripping ability. Understeer is virtually non-existent, so you can throw the car into turns without fear, knowing that the sharp steering responses and instantaneous throttle responses will bring you out without a scratch. 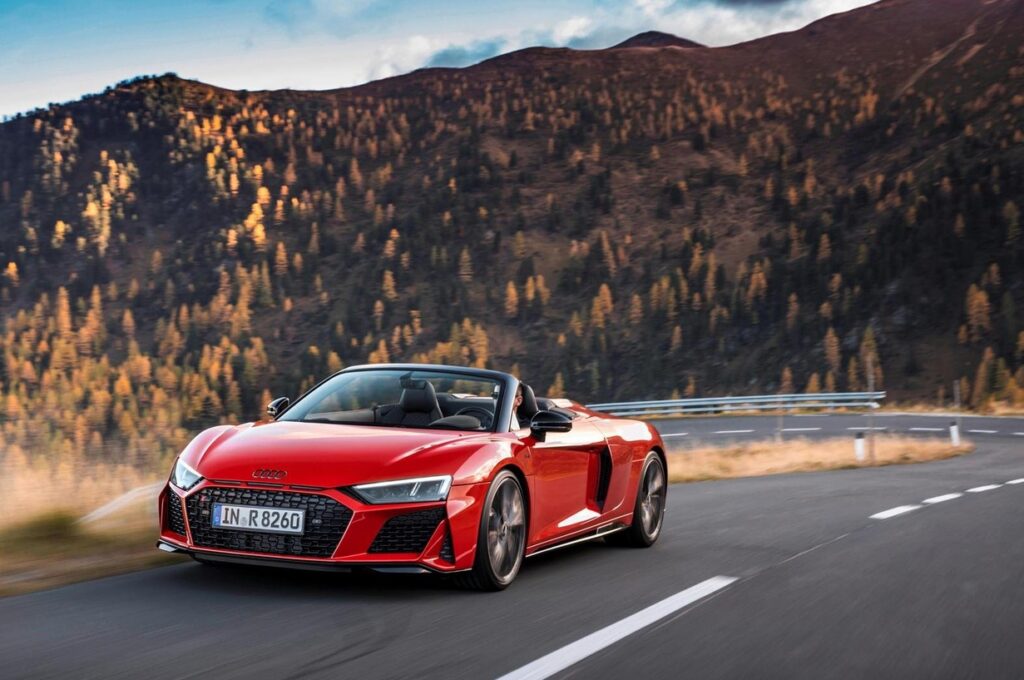 Recently overhauled for 2020, the R8 coupe is among the few sports cars that still make use of a naturally aspirated engine. However, it may be joining the ranks of the turbochargers in the near future when it comes time for a new generation model. As it stands, it is by far the dearest of the German automaker’s products, so long as you don’t look at the R8 Spyder convertible.

The raucous V10 under the hood supplies varying outputs, depending on how it is tuned, but the best performance is presented by the R8 Performance trim. With access to 602 hp and 413 lb-ft, along with Audi’s patented quattro AWD, it shoots off the starting line in a flash and reaches 60 mph in a respectable 3.2 seconds. There may be quicker supercars out there, but few can match the glorious soundtrack of the Audi’s V10.

The interior is as lavish as one might expect from the German brand; carbon fiber abounds and high-quality leather covers every surface. This makes it a great place to enjoy the superb handling of the AWD vehicle. Perfectly weighted steering and flawless tire grip mean that you can take corners confidently at speed, but the slightly grabby ceramic brakes on the Performance may leave an unpleasant aftertaste in your mouth when you are finally ready to wrap up the fun. 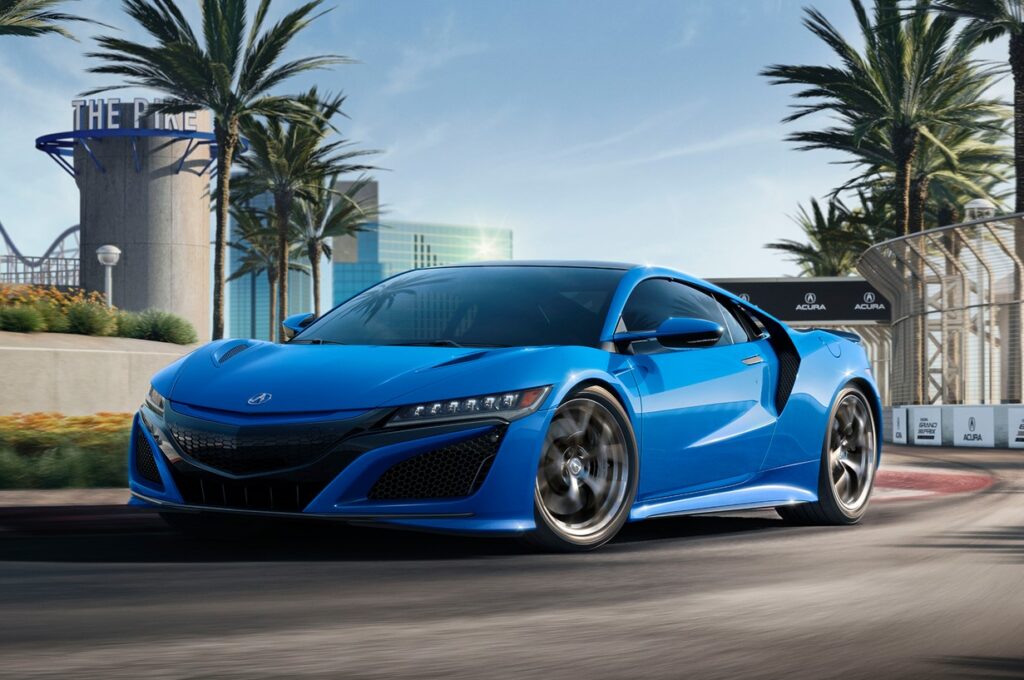 The NSX sets itself apart in this list by being the only car to incorporate electrification in the powertrain. However, as many automakers make the move towards embracing the newer technology, we should expect to see a lot more similar configurations in the near future. Acura didn’t really take any liberties with styling the NSX. It looks good, that’s not in question, but it doesn’t really stand out.

The 3.5L twin-turbocharged V6 under the hood would be more than enough to satisfy the needs of a luxury coupe, but as a supercar, the NSX needs a little more, which it gets from the trio of electric motors spread around the chassis. With total outputs of 573 hp and 476 lb-ft, it has truly impressive performance figures, soaring past the 60 mph mark in just three seconds from a cold start.

The Acura feels just as at home on the track as it does around town, with superb handling at speed and a compliant suspension when cruising over rough pavement. Unfortunately, comfort is somewhat undermined by the pedestrian styling of the interior. The only thing that gives away the fact that you are in a luxury supercar is your head being pinned down to the headrest when accelerating. 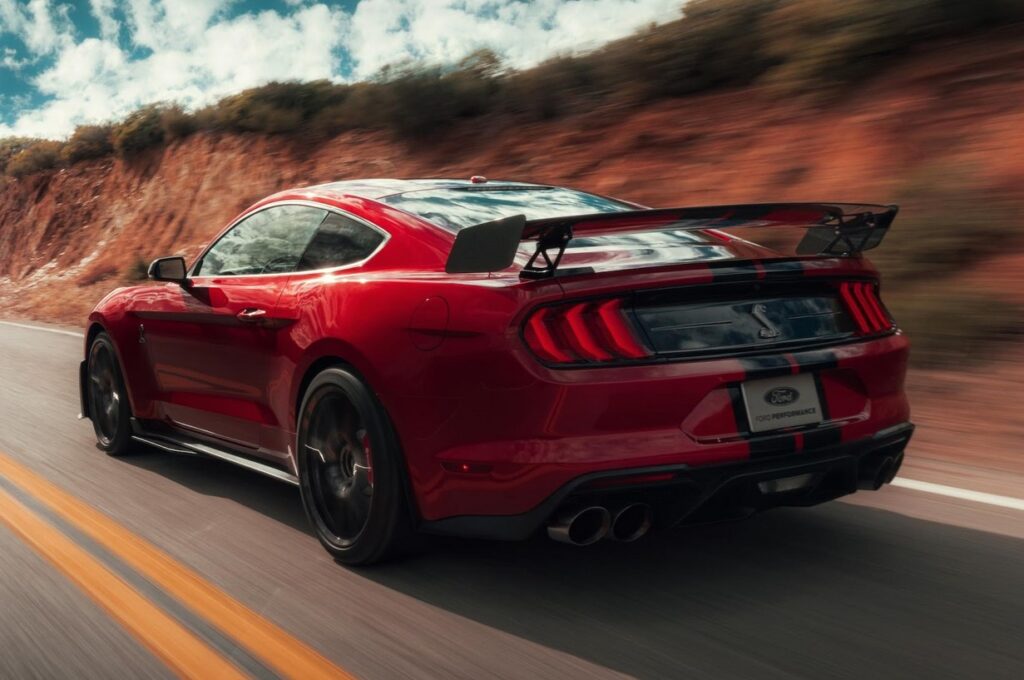 The Shelby GT500 is a rather unique entry on this list as it comes in under $100,000. However, it is still considerably pricier than the rest of the Mustang range. Nevertheless, it is actually the most powerful of the five supercars here, in terms of sheer engine outputs, anyway. Classic American muscle car styling is immediately evident when you first see the Shelby, but it is enhanced with aerodynamic sweeping lines and an eye-catching tail wing.

A supercharged V8 is responsible for moving the Ford coupe, which is slightly heavier than much of its competition at 4,171 lbs. But with 760 hp and 625 lb-ft at its disposal, it doesn’t even break a sweat. Nevertheless, it isn’t the quickest supercar on the road, but the sprint time of 3.3 seconds is nothing to scoff at, and it breaks the quarter-mile in under 11 seconds.

Despite its larger size and slightly chunkier dimensions, the GT500 is agile on the road. The extra weight actually helps keep the rocket-powered Ford hunkered down while all more aerodynamic enhancements and limited-slip differential help it slide in and out of corners with surprising grace. The only real objection to this well-crafted offering is that its interior looks about as plain as that of the base-level Ford Mustang.