Evil Dead: The Game is as ridiculous, bone-chilling, and over-the-top hilarious as the movie and TV franchise from where it draws all its inspiration. With four movies and three seasons of a TV show, there's obviously a lot of material for the game to draw from for everything, from its weapons to its enemies and all sorts of other easter eggs lying around all over the place.

Everything in this game feels like a love letter to the classic horror franchise. From the way the demon shakily moves just like in the movies to the excessive gore present in every kill throughout the game, this has everything Evil Dead fans could want and more. Let's talk about some of the funniest things you may or may not have caught in the Evil Dead game that take their gags directly from places in the movies or show. 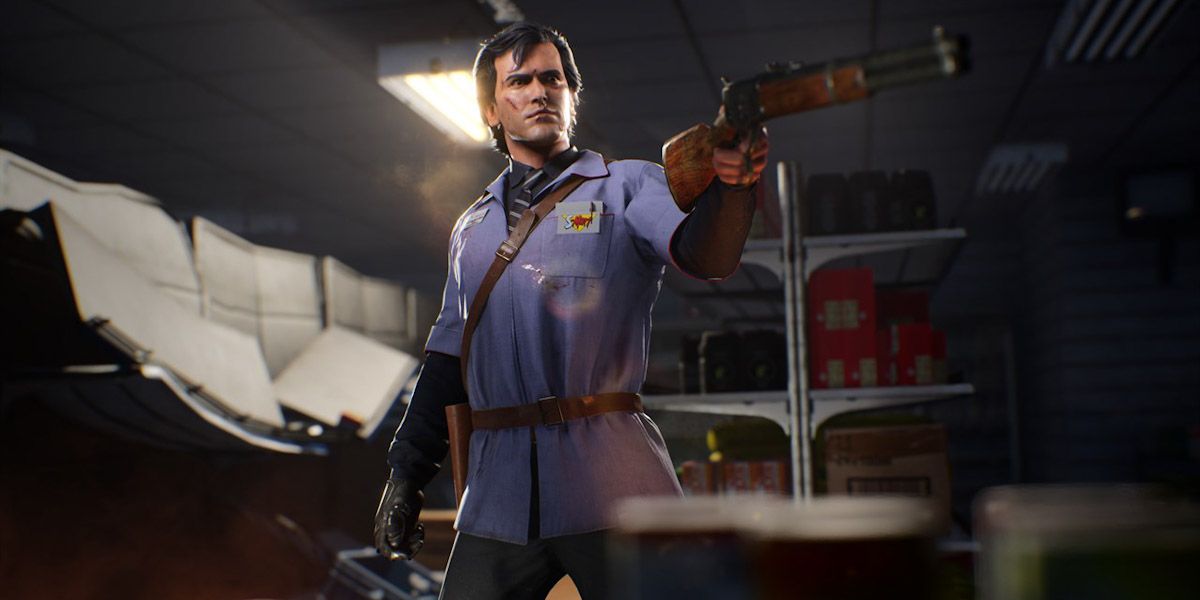 One of Ash's outfits shows him wearing an S-Mart employee uniform. S-Mart is where Ash bought the double-barrelled shotgun he uses in Army Of Darkness. He also tells the peasants it's called a "boomstick", a name which makes a return for one of the shotguns in the game. Honestly, buying a shotgun in an American supermarket is one of the more realistic aspects of the Evil Dead game. 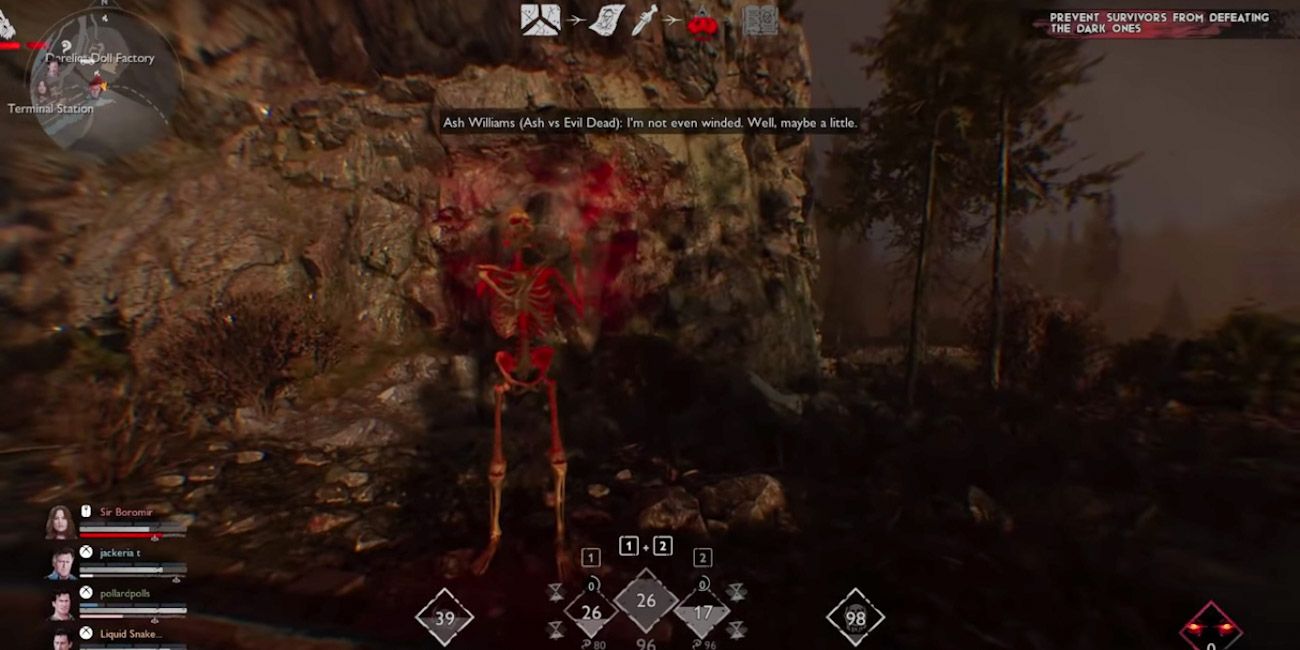 There's an ability in the game that allows you to summon a flute-playing skeleton. The flute is really just part of a femur bone. This is taken directly from Army Of Darkness, a movie with skeletons galore. Among the ranks of the skeleton army in that film, there are bagpipe-playing skeletons in Scottish attire and, yes, a skeleton playing a bone flute. How a skeleton can play the flute or the bagpipes with no lips or lungs is beyond any of our mortal knowledge. 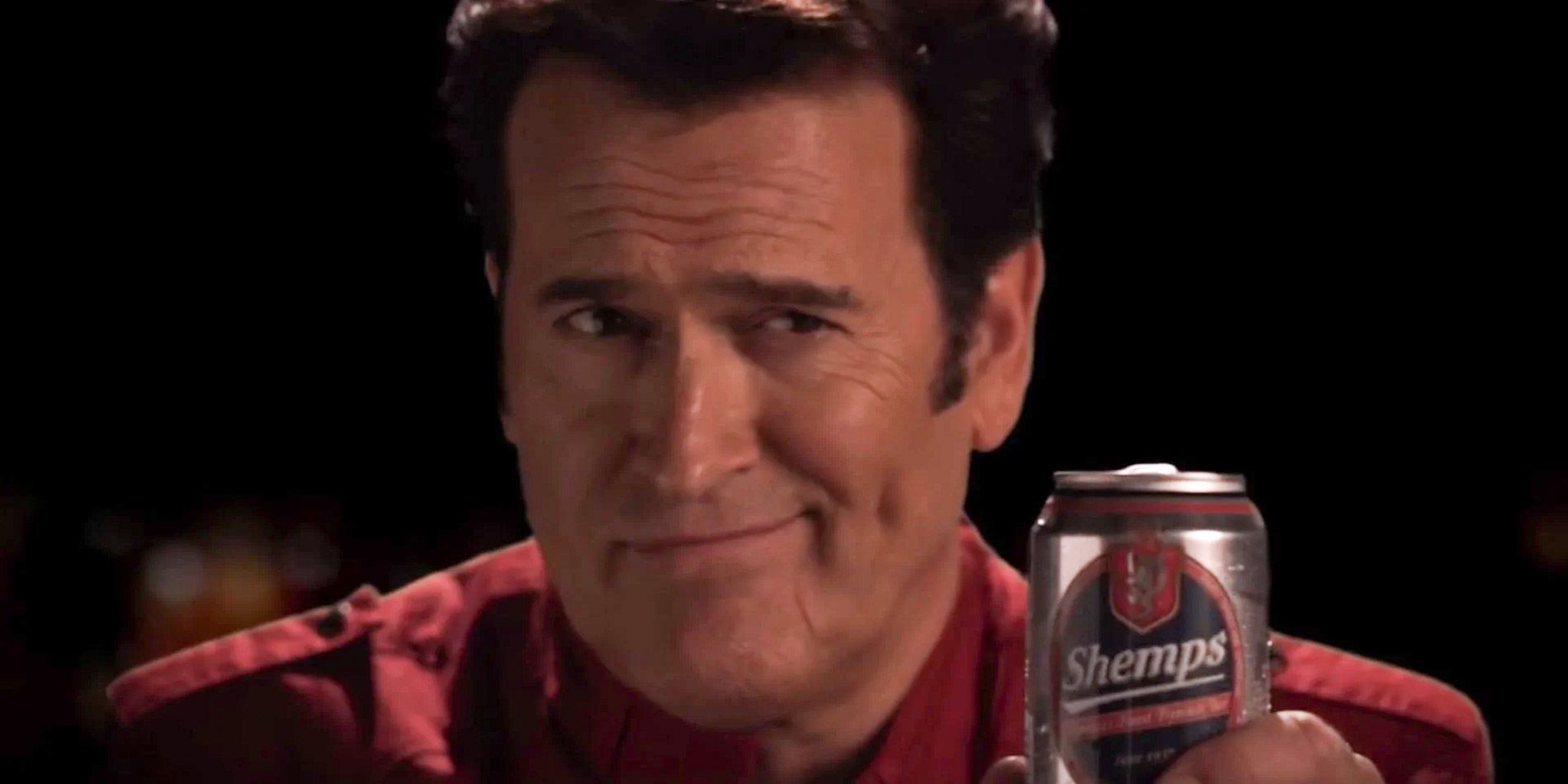 Shemp's Cola is the main way you can get health back when exploring the cracks and crevices of the map in Evil Dead: The Game. If you've only ever seen the movies, you may be wondering where this comes from. It's a recurring item from the show Ash vs. The Evil Dead, although in the show it's known as Shemp's Beer.

Why the developers decided to make it cola instead of beer in the game is anyone's guess at this point. Maybe to avoid promoting alcoholism? In a game about fighting off satan's spawn with a chainsaw hand, guns, and all manner of other weapons, you'd think a little beer wouldn't be so frowned upon. 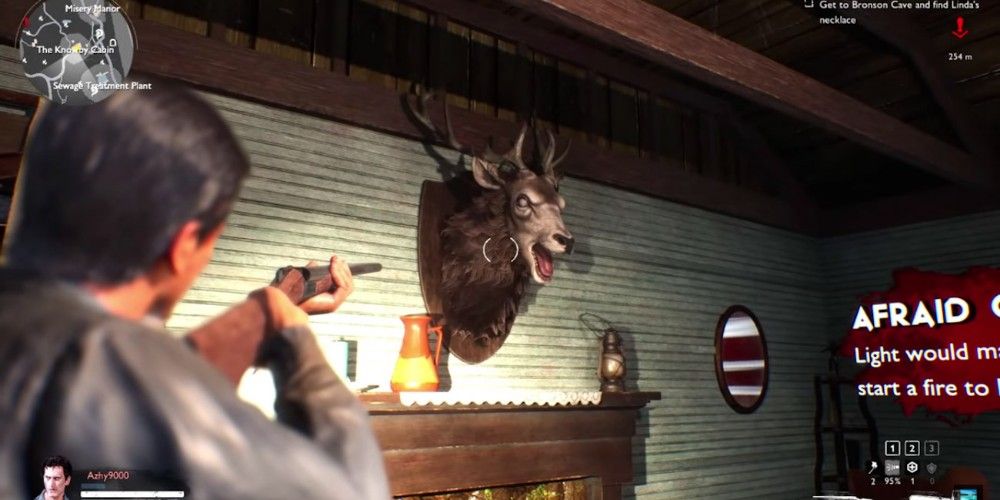 In Evil Dead 2, as things progress further and further into chaos and pure hell all around Ash, even the deer head mounted on the wall becomes possessed and taunts our protagonist.

In the game, this possessed taxidermy makes a return. Rather than moving around, it's just a stagnant wall head with a wild, possessed look to it. It's a great nod to possibly the best movie in the franchise, but it would be cool if it moved around a little bit, too. 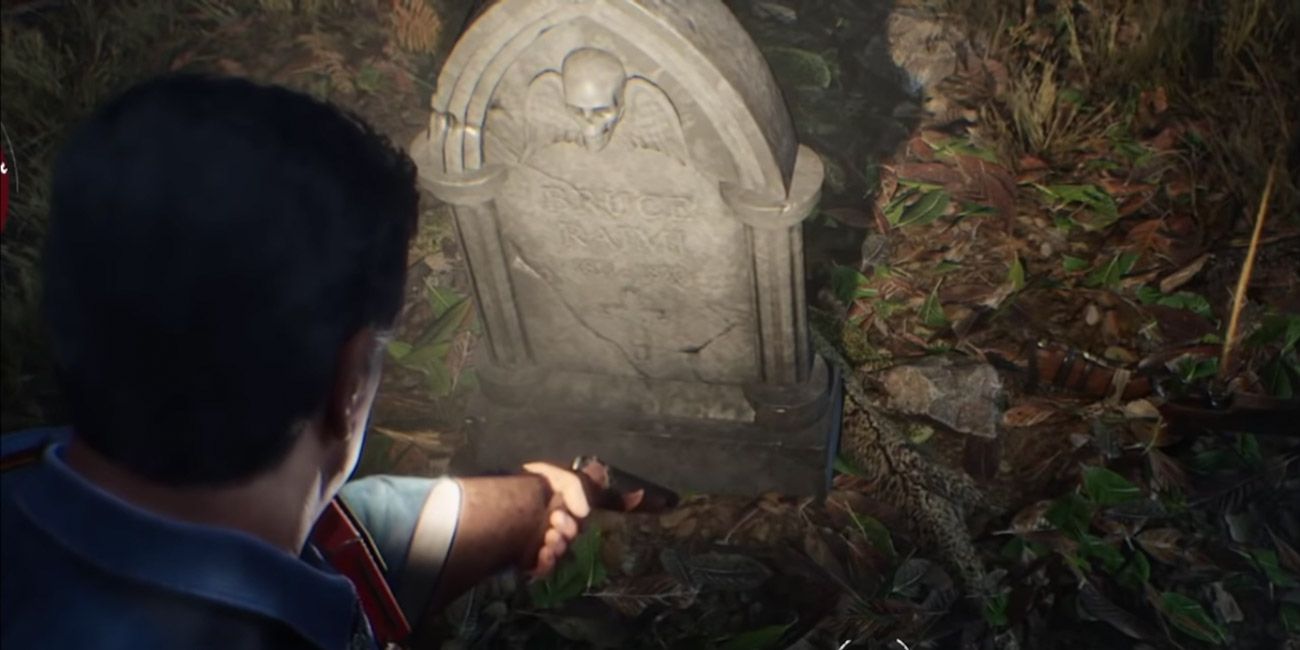 In the graveyard, you've probably stumbled upon on the game's map while playing you may have noticed some familiar names on one of the grave stones. It reads "Bruce Raimi," followed by a birth and death year in the 19th century. Obviously, Bruce Raimi is a mashup of Bruce Campbell and Sam Raimi's names. Without those two, there would never be an Evil Dead, or any movie that even comes close to the energy this franchise gives off, so it's a shame the conglomeration of the two is dead in this game.

2 Trapping Ash With His Own Hand 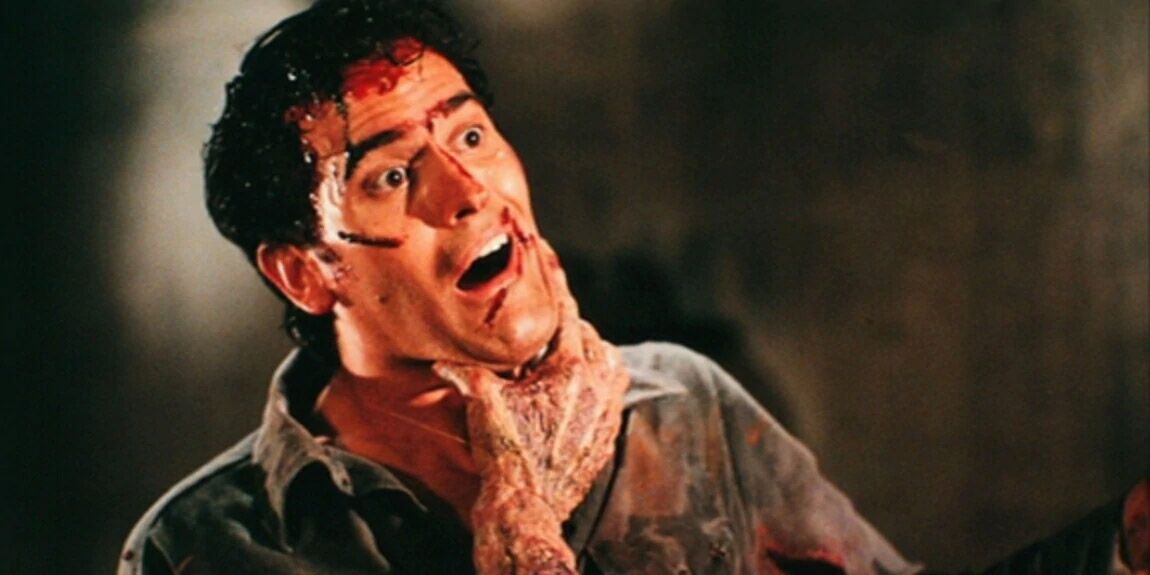 When playing as the demon in the Evil Dead game there are a number of ways you can booby trap the map to try and get the upper hand (pun intended) on your opponents. One is to rig a crate with Ash's age-old nemesis, his own severed hand. In Evil Dead 2, Ash's own hand becomes possessed and tries to kill him, forcing Ash to cut it off in order to save himself. That very hand can come back to haunt Ash in this game.

Another gag related to Ash's hand worth noting is that the book A Farewell To Arms makes an appearance in one of the houses in the game. Ash uses A Farewell To Arms to hold down the bucket containing his severed hand in Evil Dead 2. 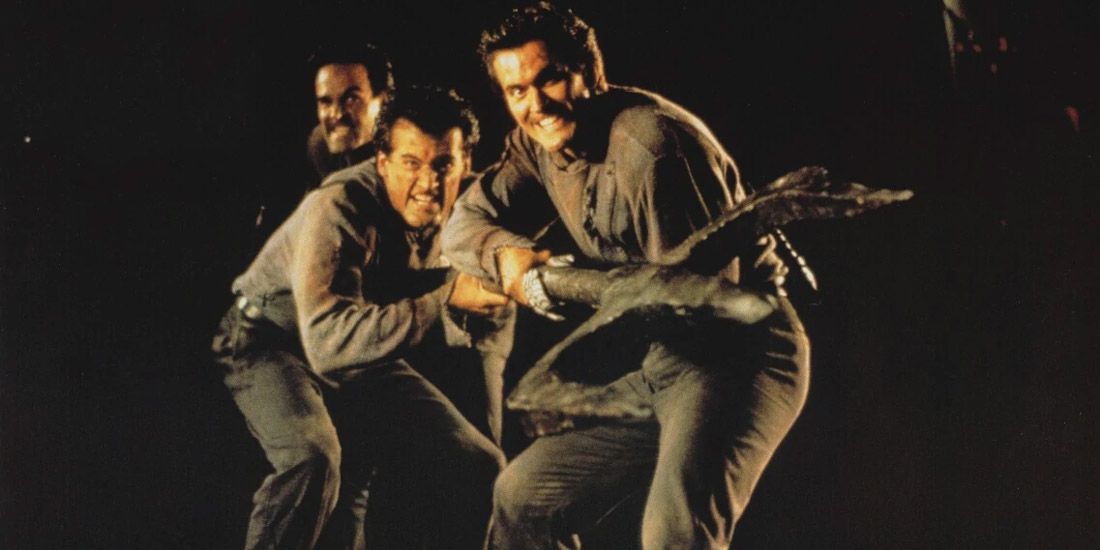 There's another way to rig the crate. This time not with Ash's severed hand, but with a legion of tiny versions of Ash himself. This comes from another famous scene of Ash fighting (and mutilating) with himself. Only this time the scene comes from the third movie in the trilogy, Army Of Darkness. The tiny Ashs are infamously mischievous and like to torment the original Ash however they can.

Another reference to the same Army Of Darkness scene that fans will notice is that a picture of the windmill, in which the described scene takes place, can be found in a dark corner of one of the houses.