Like the other games in Yoko Taro's series, Nier: Automata is not the type of game you'd play if you just wanted something light and inconsequential to pass the time with. It isn't afraid to get dark and philosophical, and some scenes might disturb you when you take the time to think about them.

But it's not all pain and suffering. There are moments in the game that can warm your heart, and you tend to appreciate them even more because Nier: Automata is usually so dark otherwise. Side quests are important in this game, as a bunch of them are where these moments come from and can even affect some of the endings.

There Will Be Some Spoilers For Nier Automata To Follow 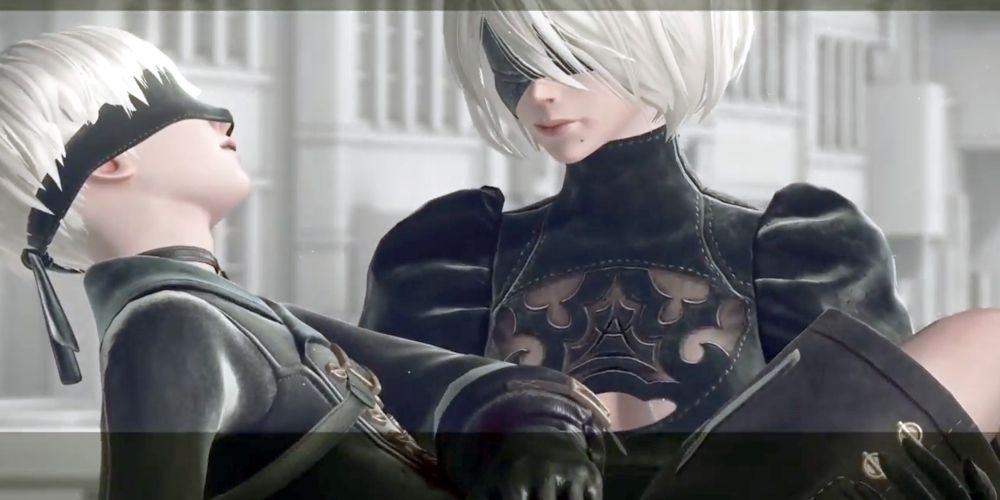 2B and 9S have been a team since the very beginning of the game. However, 9S is much more formal and awkward towards 2B at first, referring to her as "ma'am." 2B is also cold towards him and doesn't make much effort to converse with him outside their mission.

But after spending more time together, she starts to show genuine concern for him, becoming enraged that Adam had taken and hurt 9S. She's also clearly devastated when she has to "kill" 9S again, which is especially interesting when you consider that her true mission from the start was to eliminate him.

6/7 The Animal Care Side Quest 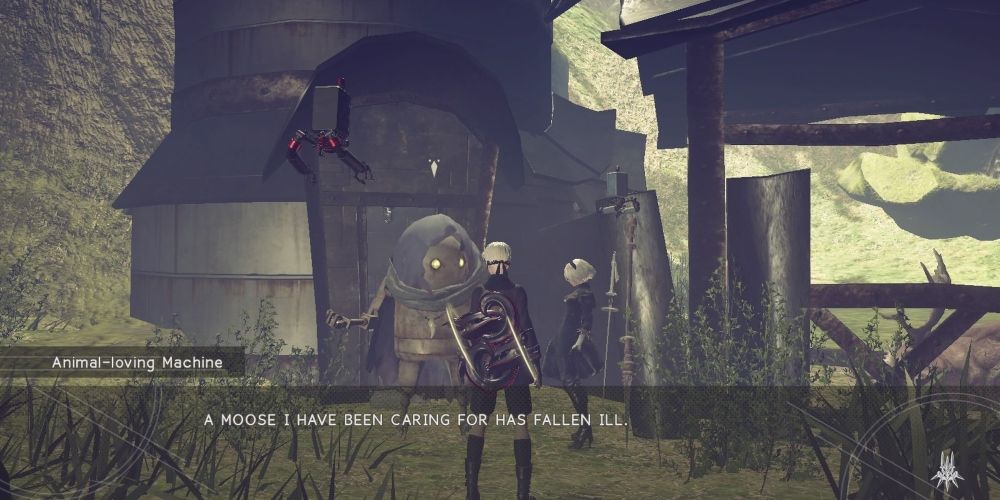 Pascal's peaceful robot village is a nice break from all the destruction and devastation outside. The machines in it mean absolutely no harm, only wanting peace, and a lot of them even ask the androids for help. One such machine, named the "Animal-loving Machine", asks you to help them cure the sick moose in their care.

If you do this mission, the moose recovers, and the machine acknowledges how different animals are to them, as animals can't just be repaired as machines can. They also acknowledge the warmth that animals have, which machines lack. It's a little sad, but it goes to show that machines can be much more than the enemies you fight and they can contemplate what makes something a living being. 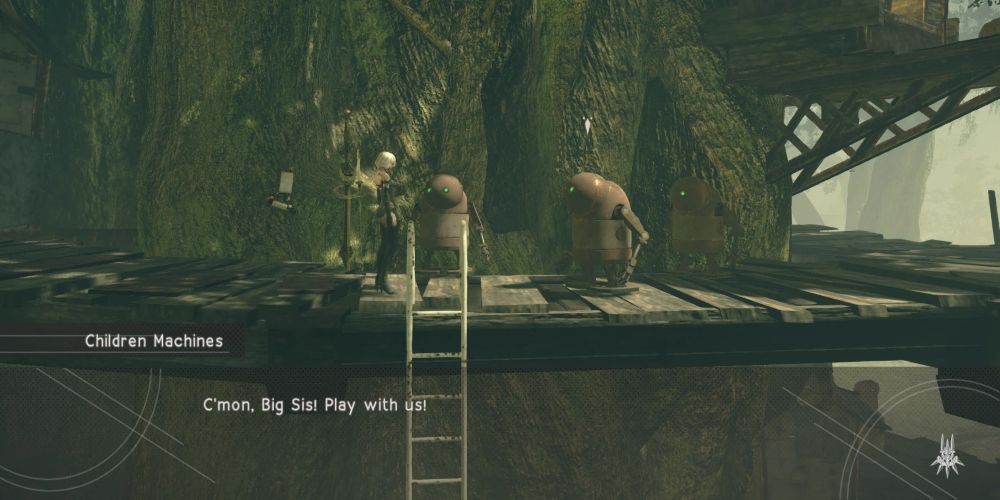 It's important to remember that machines and androids are usually enemies at war, which is why they're so hostile toward each other. Because of this, 9S and A2 aren't too keen on getting along with the non-hostile machines in Pascal's village, even though those machines are harmless.

However, they both warm up to the machines at least a little, especially the children. 9S speaks softly to the lost Little Sister machine when guiding her back, and A2 helps some of the village's children make an area for them to play in. To see androids who usually hate machines interact with them peacefully is pleasant to watch.

4/7 The Lost Girl Side Quest 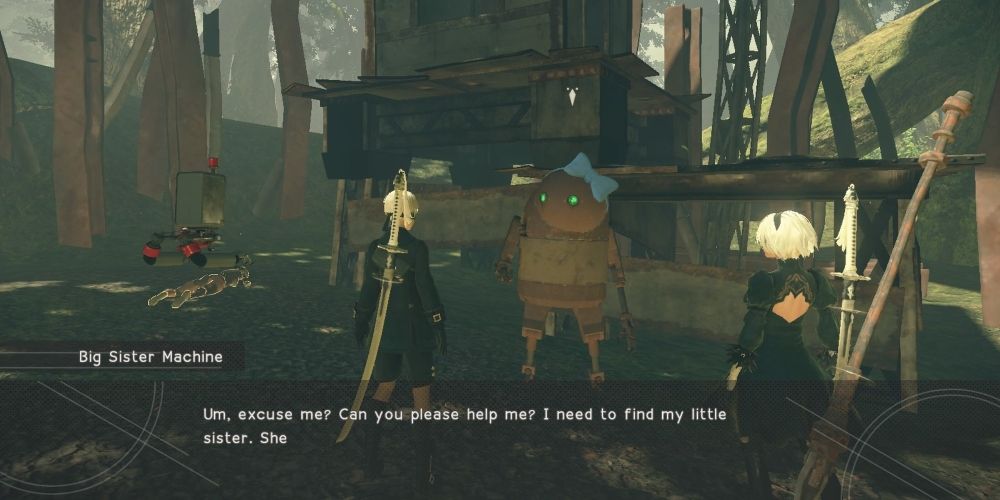 This side quest is another example of machines being capable of some sort of emotion. In fact, the machines in this quest consider each other sisters and treat each other like human siblings would. They even have matching bows!

Also, the lost machine you have to find acts just like a little girl, even though she's much taller than her big sister. The worry from the Big Sister Machine when her little sister is missing and the sheer relief when she's found really forces you to confront the fact that machines aren't just mindless tin creatures after all.

3/7 The Emil's Memories Side Quest 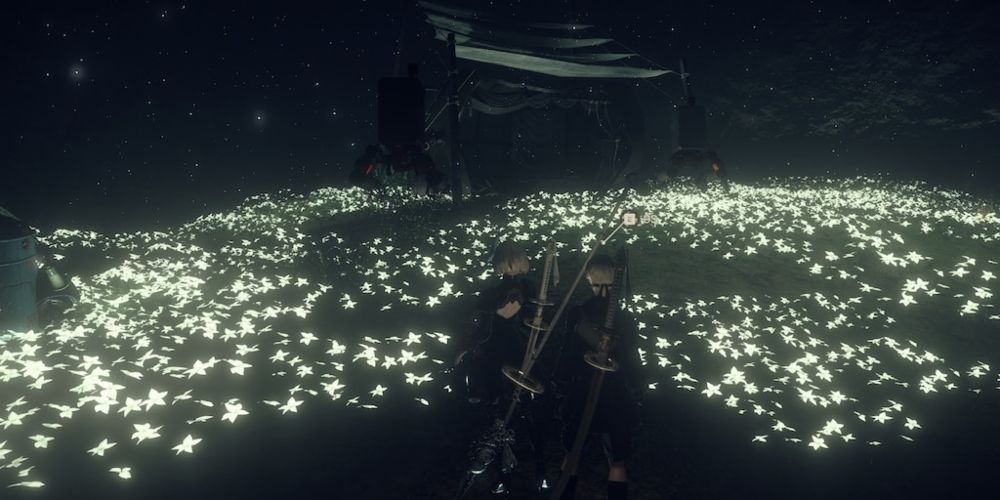 If you've played the other Nier games, you'll recognize Emil in Automata. For the most part, he acts as a vendor you can buy from and sell to, but his side quest, Emil's Memories, involves a flower called the Lunar Tear. At the end of this side quest, you unlock a location underground that's just a vast field of Lunar Tears.

The sight itself is beautiful, especially in contrast to the dull and desolate environment above ground, but Emil's speech in that place is what seals the deal. It might affect you more if you're familiar with the other Nier games, but even without that information, his sentimentality and wistfulness are enough to make anyone tear up a little. 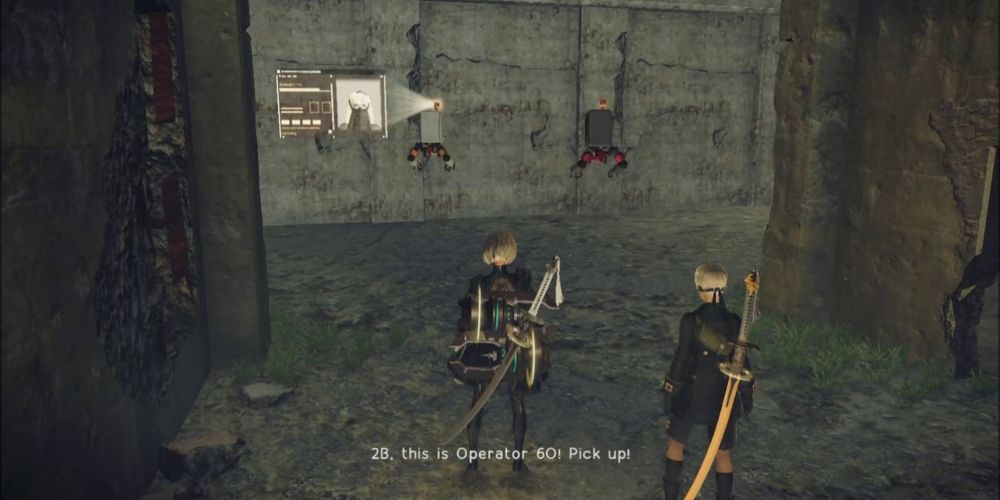 6O is 2B's assigned operator. If 9S's operator is any indication, Yorha's operators aren't very warm or friendly. However, 6O is the complete opposite. She doesn't hesitate to contact 2B just to talk about trivial things, and she's openly curious about what Earth is like since she can't leave the Bunker.

Though 2B seems stoic towards 6O, there's a side quest called Find A Present where 2B can actually go out of her way to send 6O a photo of a flower on Earth as a gift. It's very sweet, and if you do that quest, 6O will thank 2B for the flower later on in Route C even as she's undergoing corruption from the Logic Virus. It's clear that the gift meant a lot to her. 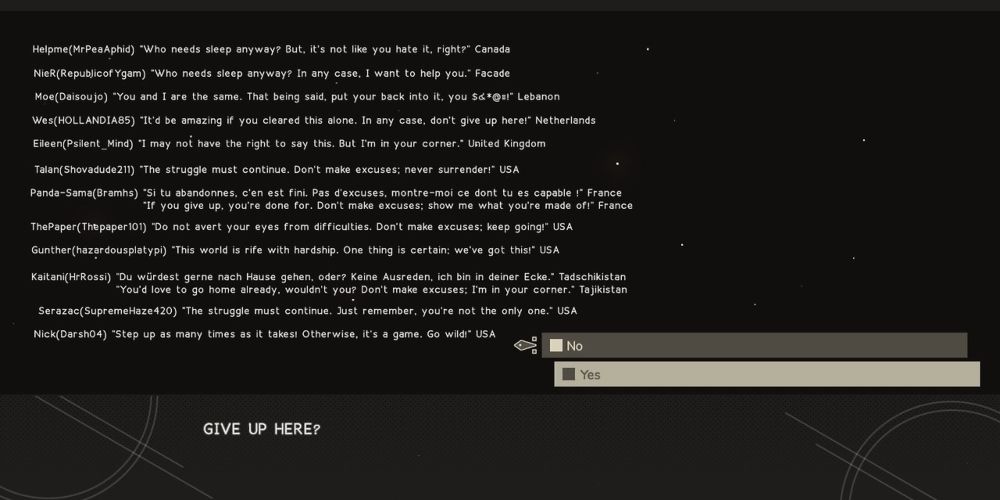 The androids have Pods that float by their side throughout the whole game. These Pods seem pretty much emotionless and matter-of-fact. However, in Ending E, when everything is said and done and the androids you've grown to love are almost certainly dead, 2B's Pod refuses to delete their data.

Instead, it wants to save them by rebuilding their data. Cue the extremely hard hacking mini-game in the credits. Eventually, other real-world players will come to aid you in surviving the credits, and it's only then that you can beat them. 2B's Pod mentions that it had begun to grow a will while it was experiencing the same things as the androids. And, in the end, the three androids are saved thanks to its actions. It is a beautiful and iconic moment that shows while Nier: Automata might be a dark game, it still believes in the inherent goodness of you and other players to come together.