Horror games must be incredibly tough to develop since the horror genre is one that requires finely tuned presentational and gameplay aspects in order to make the game both scary and immersive. While fun gameplay, creepy visuals, spooky audio, and interesting mechanics are all important, it's often the monsters that leave a lasting impression on you. Look no further than the likes of Pyramid Head from Silent Hill 2 or those darn zombie dogs breaking through the windows in the original Resident Evil.

What about the monsters that aren't as prevalent but still end up either providing a good fright or are constant reminders that this game seeks to keep you on the edge of your seat? While there are plenty of memorable horror game monsters that have become synonymous with the genre over the years, it's time to talk about the underrated and overlooked ones; the monsters that don't get the spotlight but are still downright terrifying and foreboding. 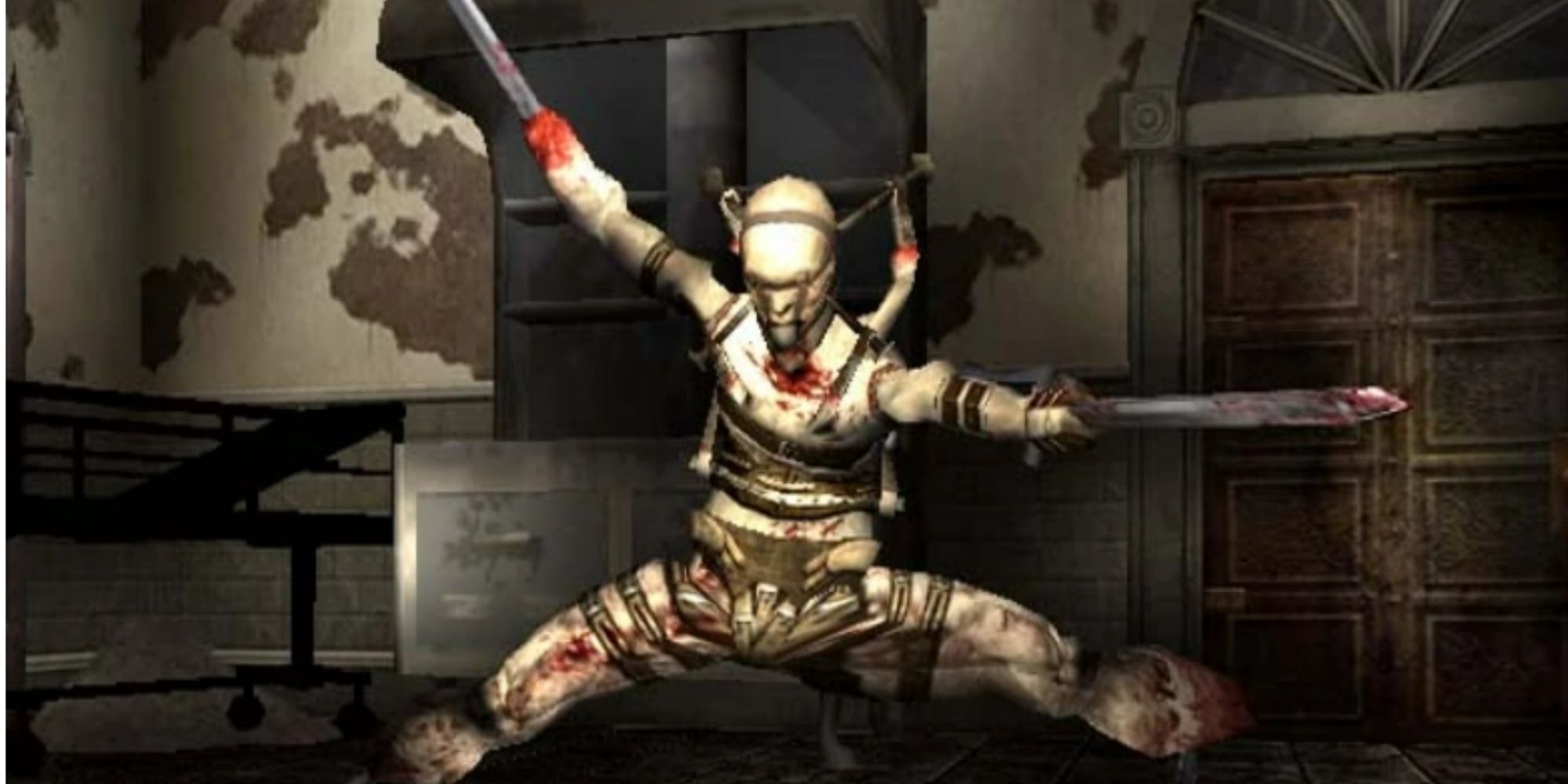 The Suffering is one of those brutal survival horror games that perfectly blended action combat with psychological horror aspects. This is most notable in the game's various creepy monsters, each of which has to do with some sort of death row punishment. One such terrifying creature from the game is the underrated Slayers.

Slayers, while being incredibly common in the game, are easily some of the most overlooked despite how nimble they are, how offputting they look, and how they can quickly take protagonist Torq down if he isn't careful. The sharp blades for hands and legs certainly don't help either. 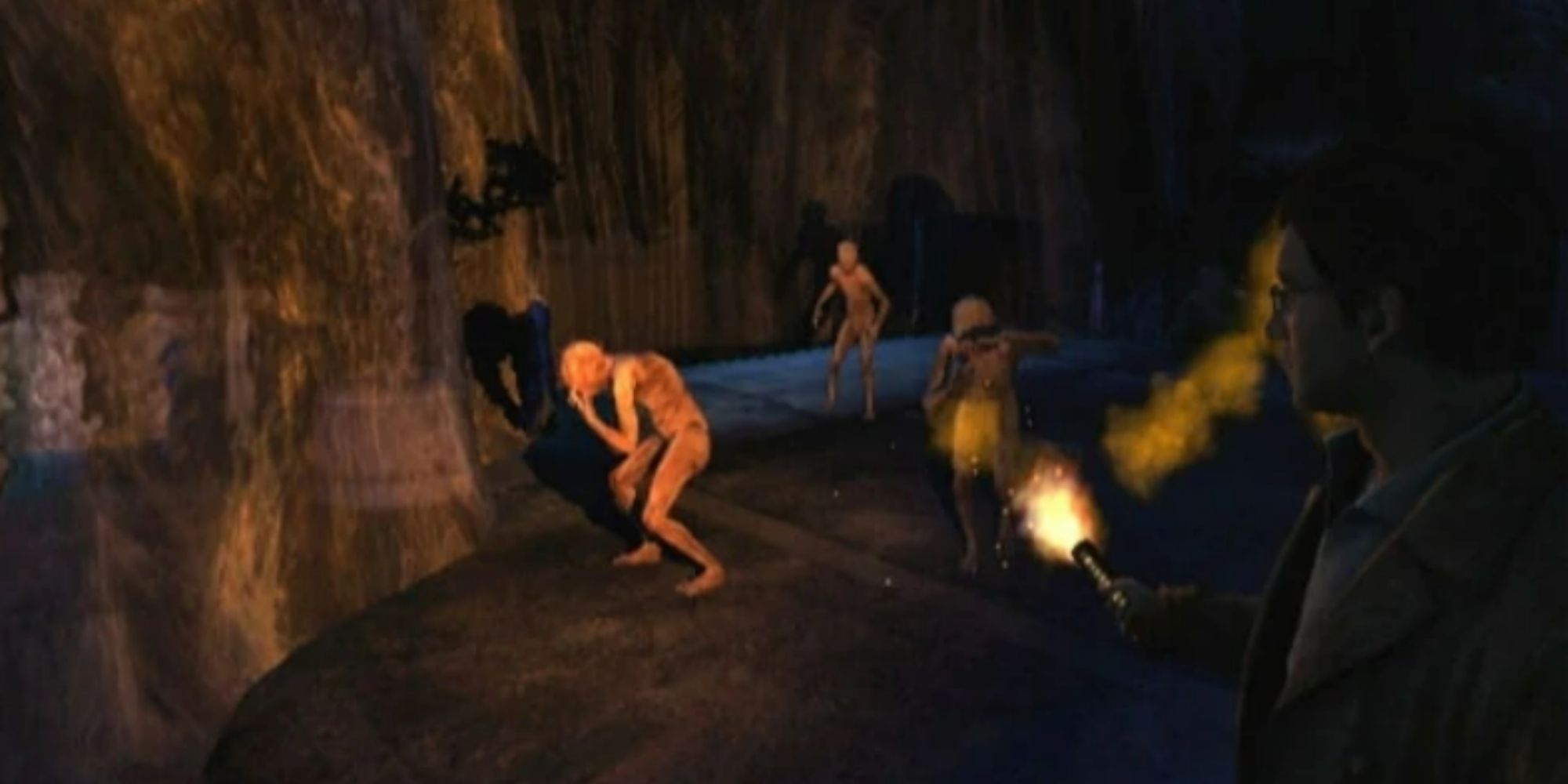 Silent Hill: Shattered Memories is one of those entries in a long-running franchise that players either loved or really disliked, mostly because it veered off from the traditional Silent Hill gameplay. While the exploration through the snow-filled streets still felt eerily similar to other games in the series, it was the proliferation of "running away from monsters" segments that were divisive.

The monsters that players run from in these on-rail segments are known as Raw Shock. Describing these spooky entities isn't easy as they are somewhat humanoid but lack any notable facial features. The fact that they stalk you in packs makes them even more foreboding and formidable. 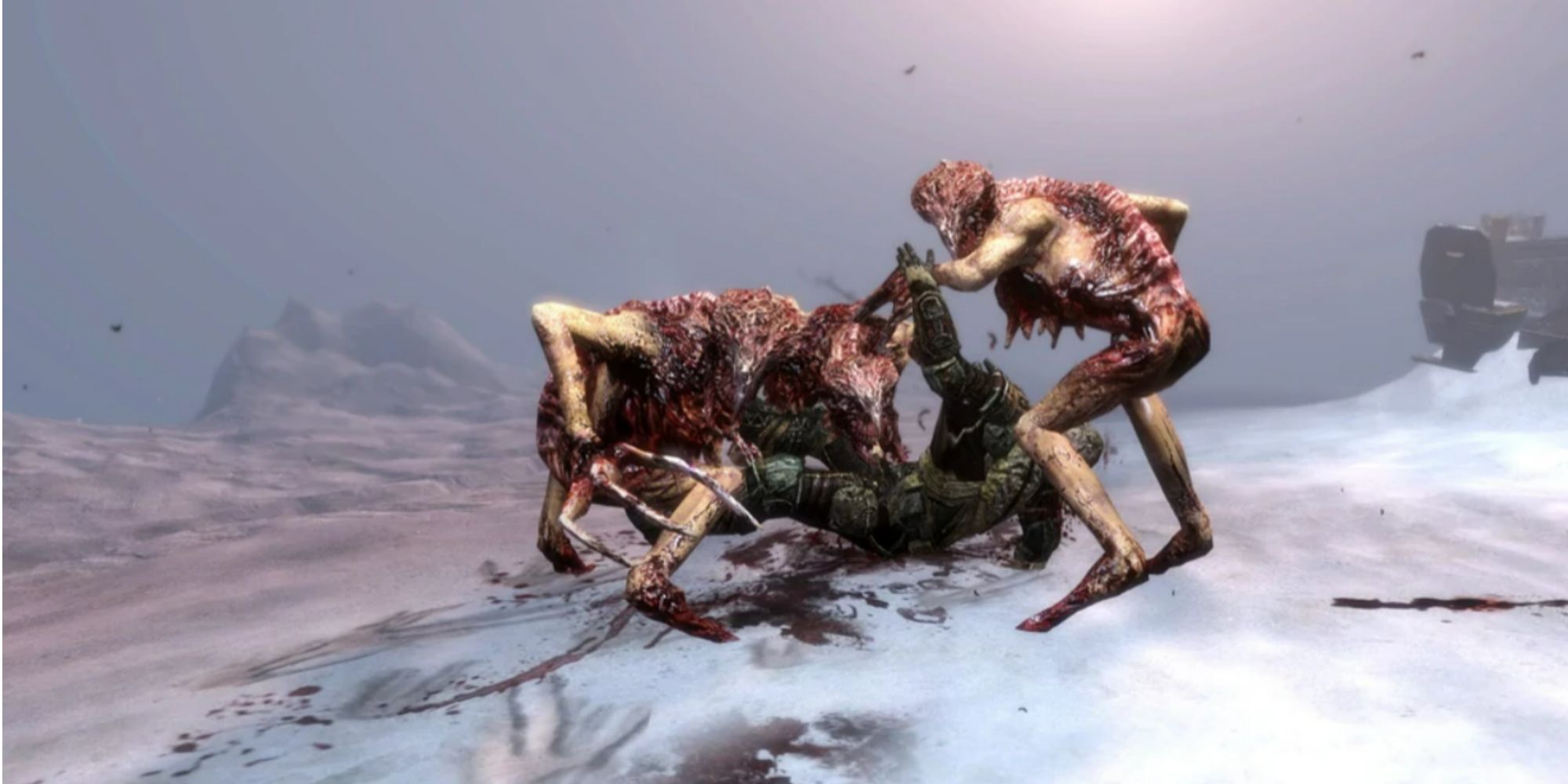 Discussing the survival horror juggernaut Dead Space wouldn't be appropriate without talking about the utterly disgusting Necromorphs. For the uninitiated, Necromorphs are zombie-like alien creatures that have manifested from the lifeless husks of their human hosts. If that description alone doesn't strike fear then it's hard to know what will.

While there are numerous Necromorphs varieties throughout Dead Space, it's the humble Stalkers that truly up the ante in terms of scare factor for space engineer Isaac Clarke. These humanoid/bird-like monsters are all about stalking their prey in packs, slowly etching closer to Isaac to help him meet his demise. Their long claw-like appendages swipe and thrust, causing massive damage overall. 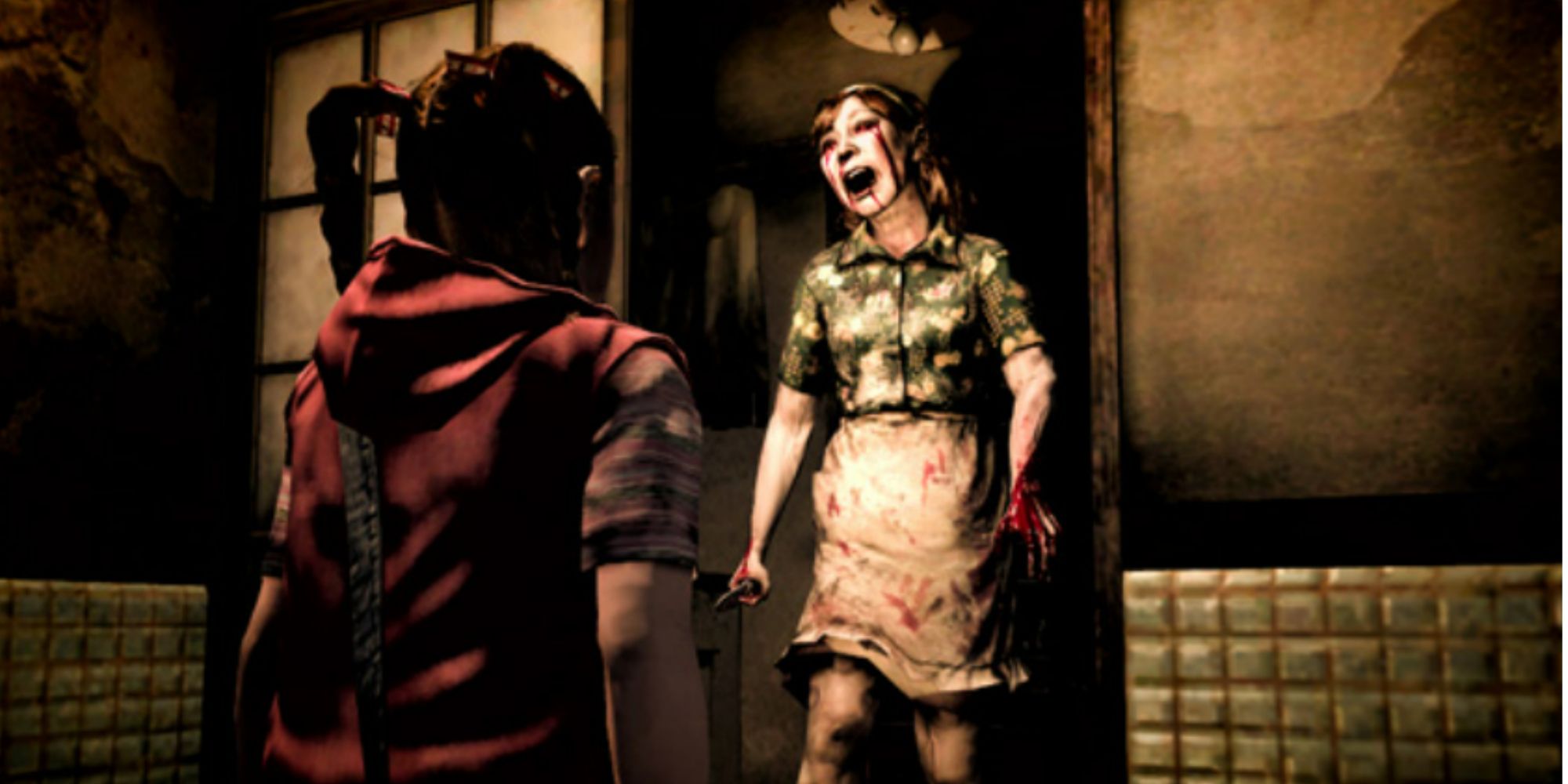 The Forbidden Siren survival horror series isn't one that is discussed as much as the likes of Fatal Frame, Silent Hill, Resident Evil, or even Clock Tower. This is a shame considering it's a downright disturbing series that uses a unique gameplay ability called Sightjacking where you are literally thrust into the shoes of an enemy, namely, the Shibito.

Shibito are strange and creepy baddies that might look like typical zombies, however, they are so much more than that. Shibito are actually the husks of humans but have been brought back to "life" through some evil forces. Instead of just mindlessly moving towards the player, they actually have cognition and mental acuity, something that makes them a real force to be reckoned with. Jumping into their shoes via Sightjacking might be helpful but it's incredibly scary to see their point of view as they head towards the stationary player character. 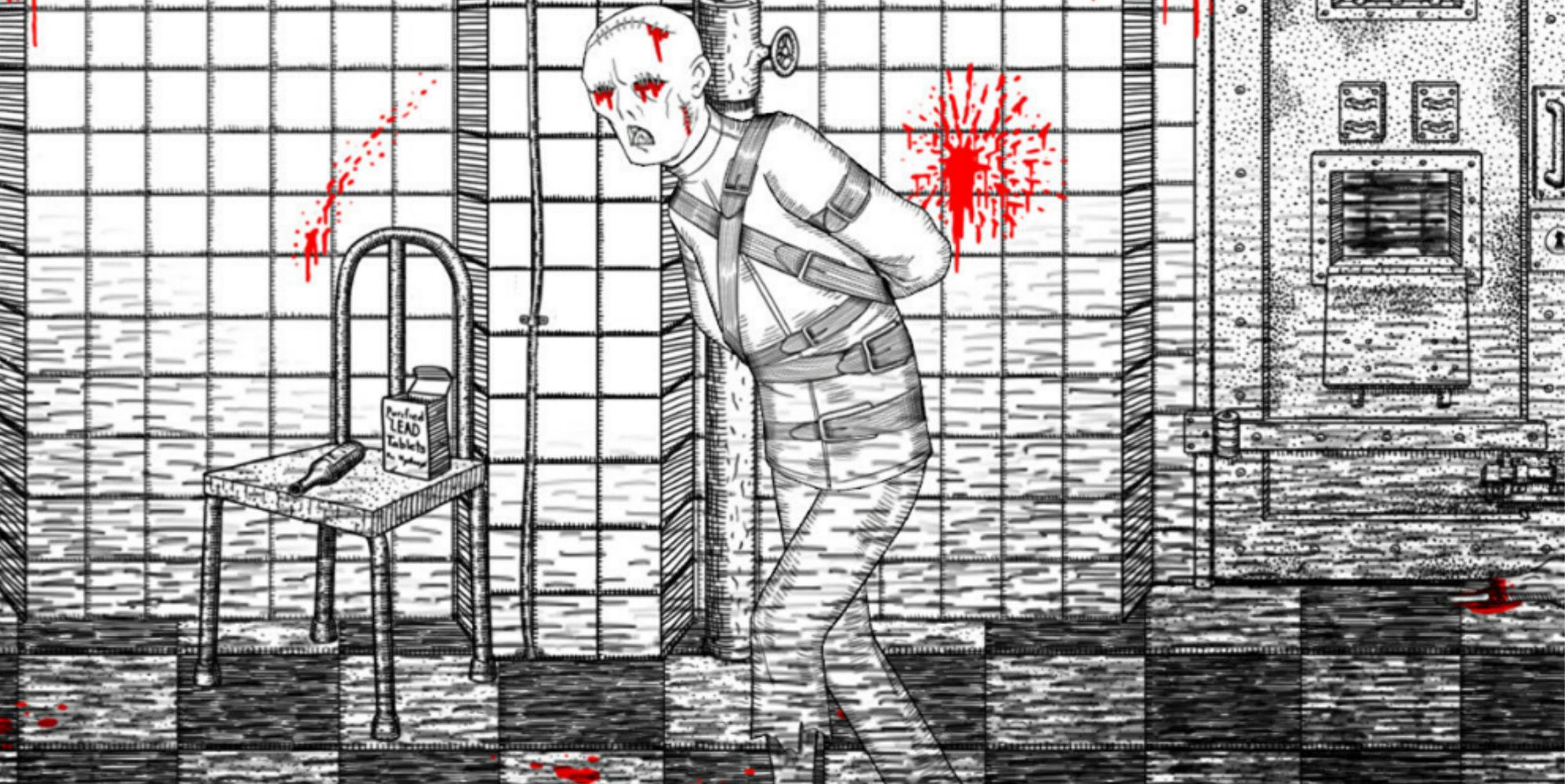 Neverending Nightmares is a short indie horror game that revolves around a mentally struggling man named Thomas. Thomas is dealing with some serious mental torture which is playing out in his mind as terrifying nightmares, as the game's title implies. Without going into spoiler territory, it's important to know that mental illness is at the forefront of this game with the developer openly sharing how his battle with depression and OCD influenced this horror title.

With that being said, the game doesn't have many traditional monsters, instead focusing on a select few that stalk Thomas around the spooky monochromatic hallways. Once such monstrosity are the Patients, otherwise known as Asylum Inmates. These bloodthirsty creatures are unable to see but they have incredible hearing and will attack Thomas at the slightest sound. The sounds like make as the player moves closer to them are the stuff of nightmares. 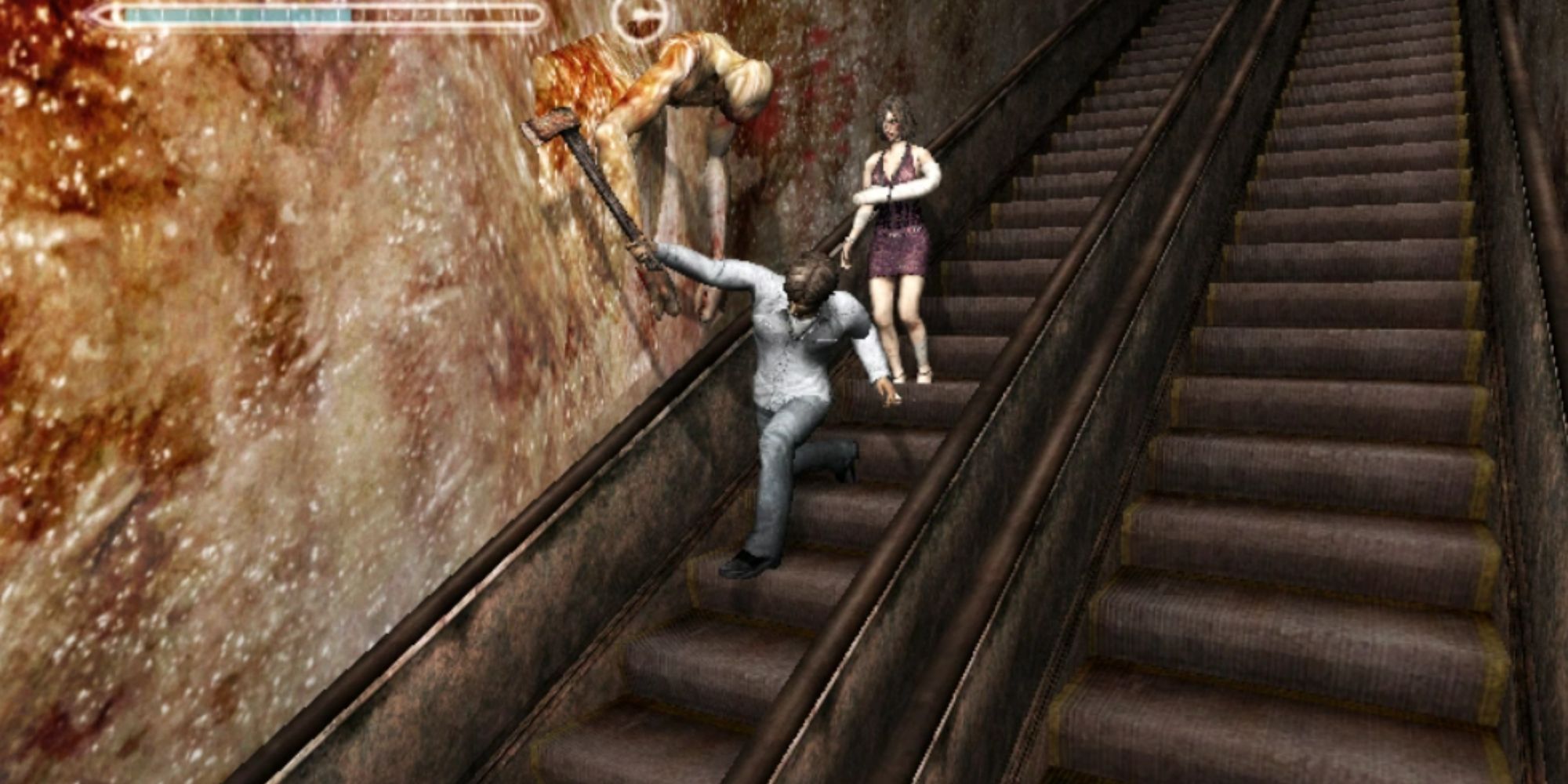 Okay, with a name like Wall Men, it's hard to get too scared, however, this couldn't be farther from the truth in regards to these stealthy monsters from Silent Hill 4: The Room. Wall Men are quite self-explanatory hence why they are often overlooked. These monsters are forever attached to various hellish walls in and around the explorable game world.

Wall Men might just look like stationary objects from far away, but when protagonist Henry Townshend gets close to them, these humanoid creatures lunge at the player with vicious ferocity. Their claw-like hands can quickly deal damage if not contended with. While they can't move around in the traditional sense, these underrated monsters will surely put up a good fight.

1 The Haunted – The Evil Within 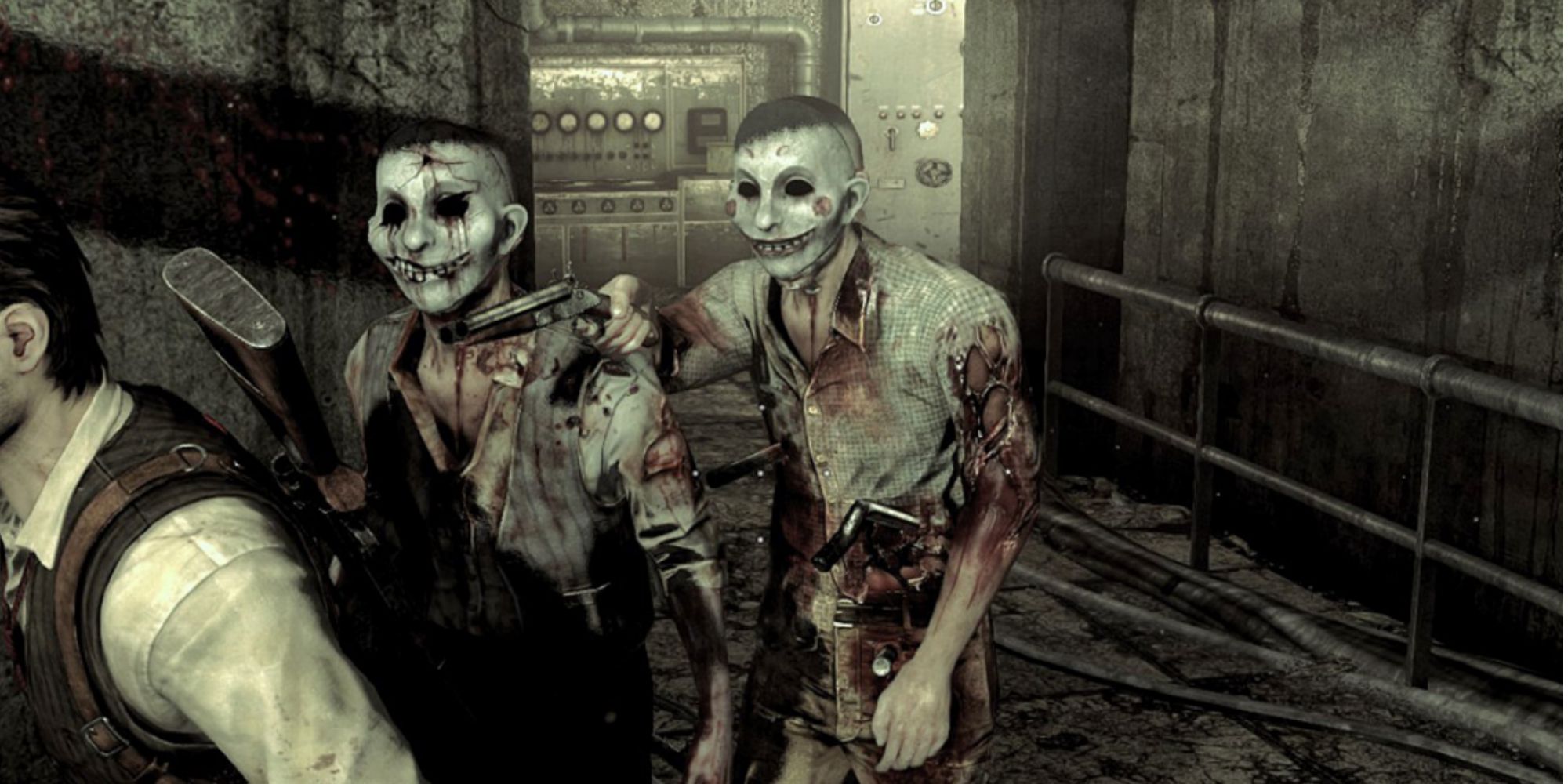 The Evil Within, created by legendary developer Shinji Mikami (Tango Gameworks) of Resident Evil fame, is a downright creepy game. Along with its sequel, this duo of survival horror games knows how to get under players' skin with its strong level design, mysterious story, smart villains, and terrifying monsters. One group of creatures from the first game are known as The Haunted, an underrated bunch that quickly strikes fear into eager horror enthusiasts.

The Haunted are creations of The Evil Within's main baddy, Ruvik. Through the power of the combined consciousness system, STEM, Ruvik is able to control aspects of the real world, something that quickly becomes apparent with The Haunted. These mask-wearing and knife-wielding creatures very much resemble humans, however, they are being forced against their will to hunt Sebastian Castellanos around each and every dark and moody corner.