Unsouled is a brutal pixel art action-adventure game with some thoughtful RPG elements added for good measure. In Unsouled, you play as a Fallen Prince who must venture across bleak landscapes in order to learn about the encroaching darkness. Unsouled is a game all about refinement, skill, and patience, mostly down to the nuanced and weighty combat systems and movement.

You shouldn't worry too much since the game properly walks you through every system when first starting out. The tutorials here are fantastic and really help get you up to speed with how this game works, especially when it comes to the unique "souls" system. While not an easy game in any sense of the word, there are plenty of options and tips to keep you moving forward as the Fallen Prince.

9 Multiple Difficulty Options To Choose From 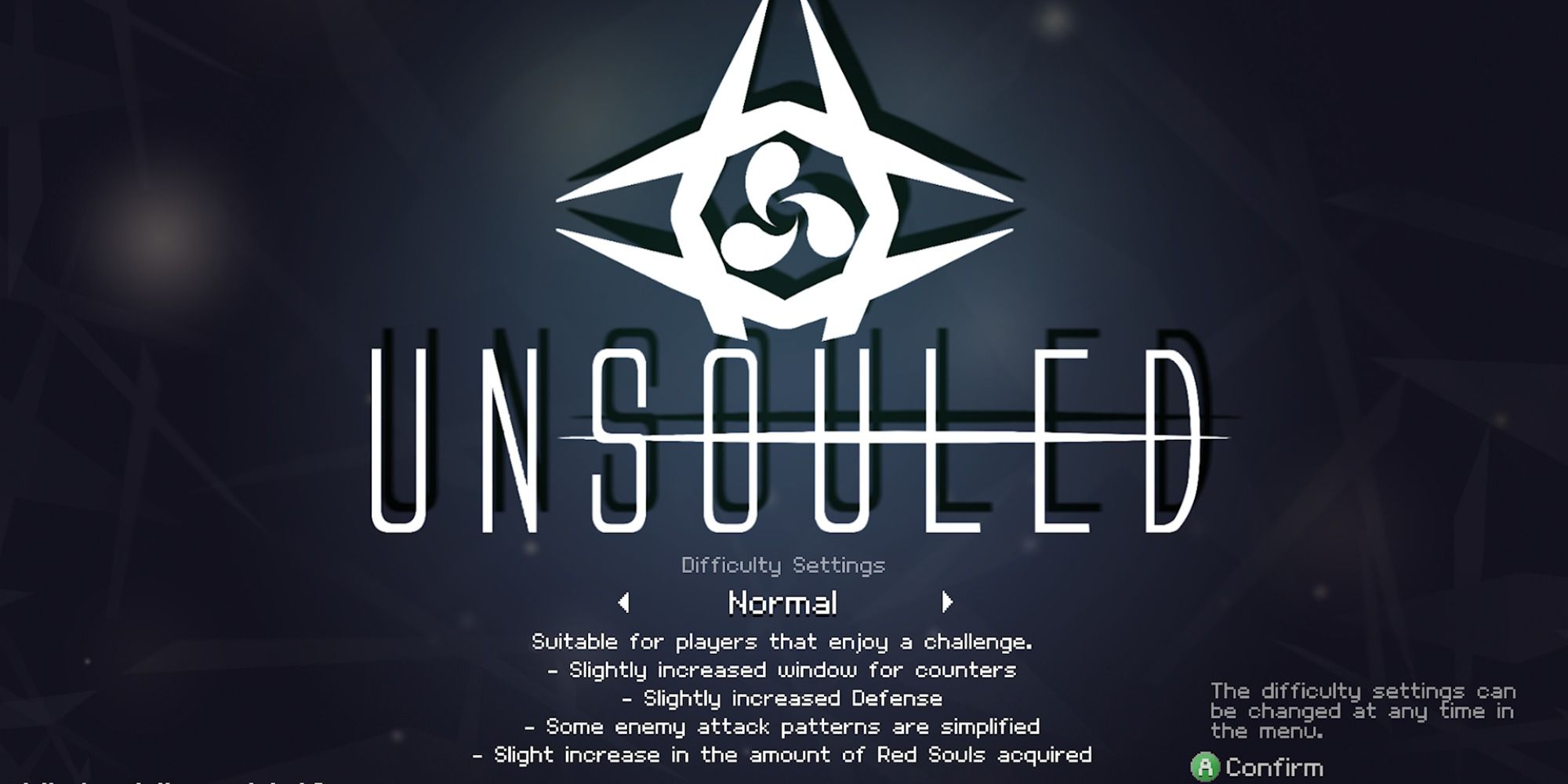 Unsouled features three different difficulty modes right from the outset. Depending on your skill level, you can choose from Prince of the Fallen Kingdom, Normal, or Master Soul. The game nicely gives a breakdown of each mode and which one you should focus on if you are looking for a specific type of experience from Unsouled.

Most players will likely start with the Normal mode, however, choosing the Prince of the Fallen Kingdom option might be wise given the game is still quite challenging, even in this easier mode. Worry not since you can freely swap between modes at any time. 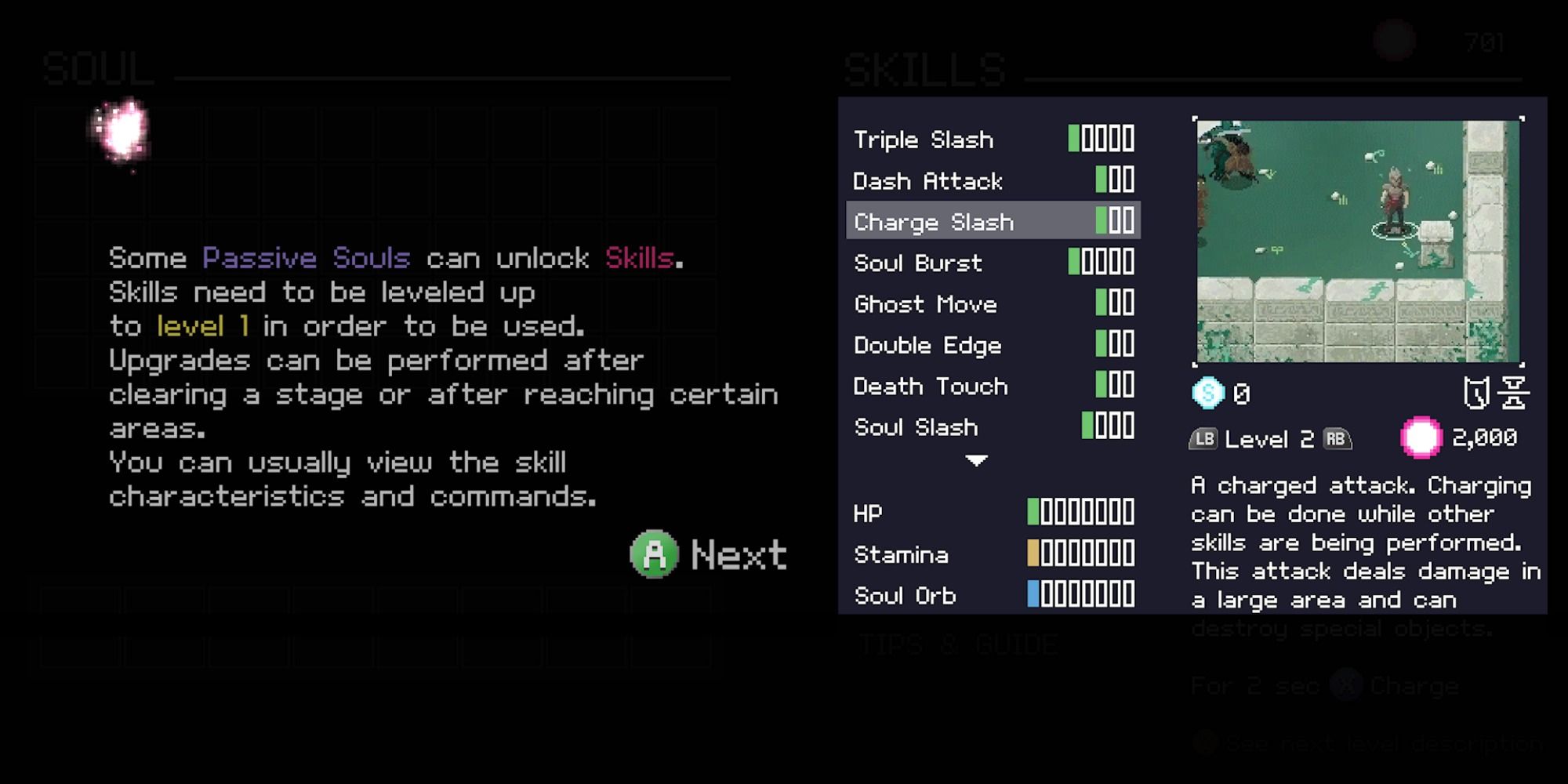 Passive souls are one of the first soul types you learn about in Unsouled. Passive souls are easily acquired souls that provide skills to the Fallen Prince. Not every passive soul unlocks a skill, but, for the most part, you will be able to add to your repertoire of moves once you have collected a new passive soul.

Skills are just ready to go once obtaining a passive soul but must instead be leveled up to level one first. By doing this, it essentially activates the relevant skill and can then be upgraded further at specific points in the game, namely, at Gradiva Statues. 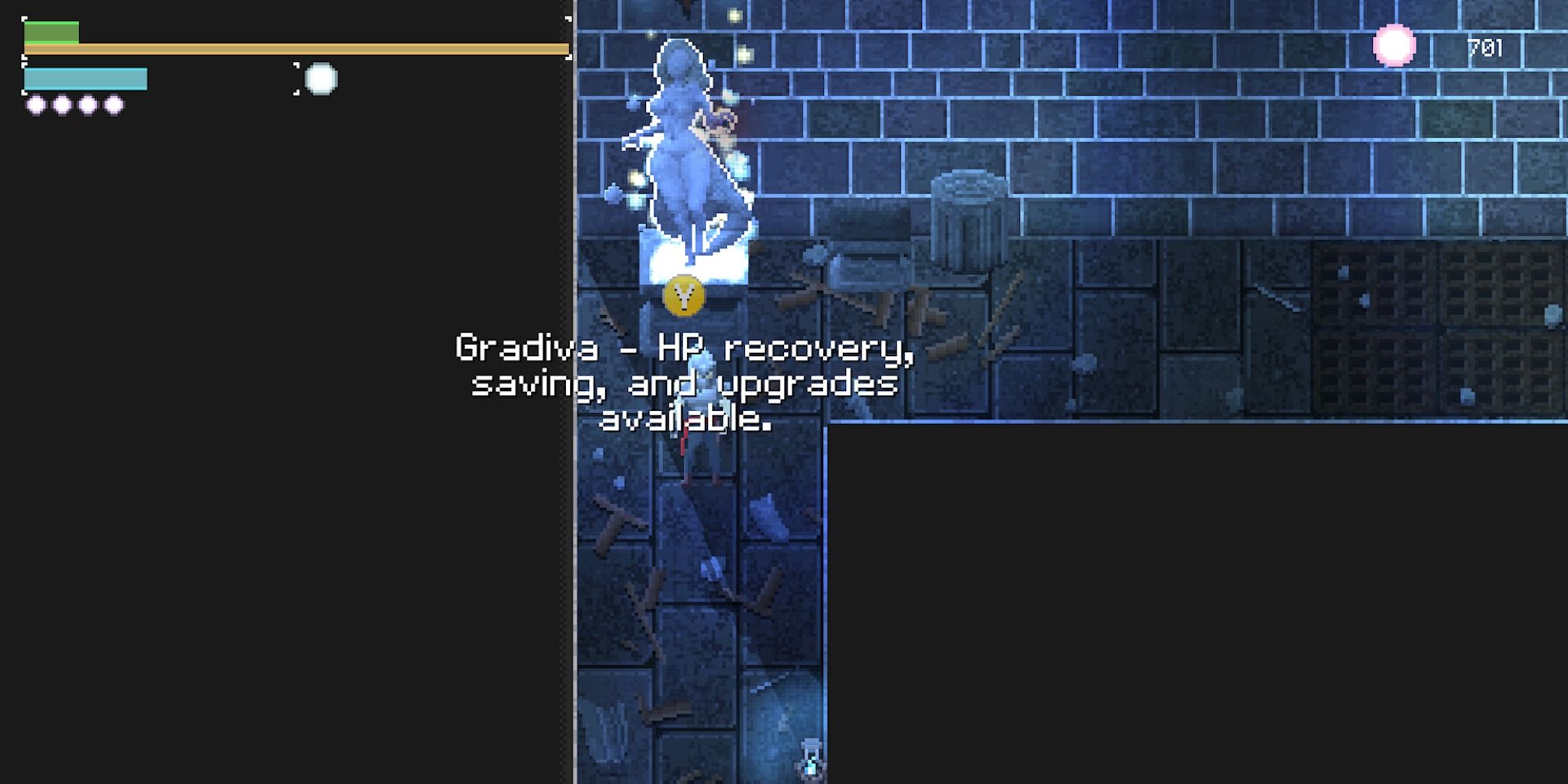 Gradiva Statues are large statues that can be stumbled across during your exploration around the lands of Unsouled. These elegant statues are first and foremost a save spot. Gradiva Statues are used to save, recover lost HP, and upgrade certain skills or abilities.

In order to upgrade at Gradiva Statues, you must first obtain red souls. Once enough red souls are accrued, you can hold down a specific button to upgrade a soul skill or ability. Be on the lookout for Gradiva Statues since death comes swiftly in this game. You will want to save and recover HP as often as possible. 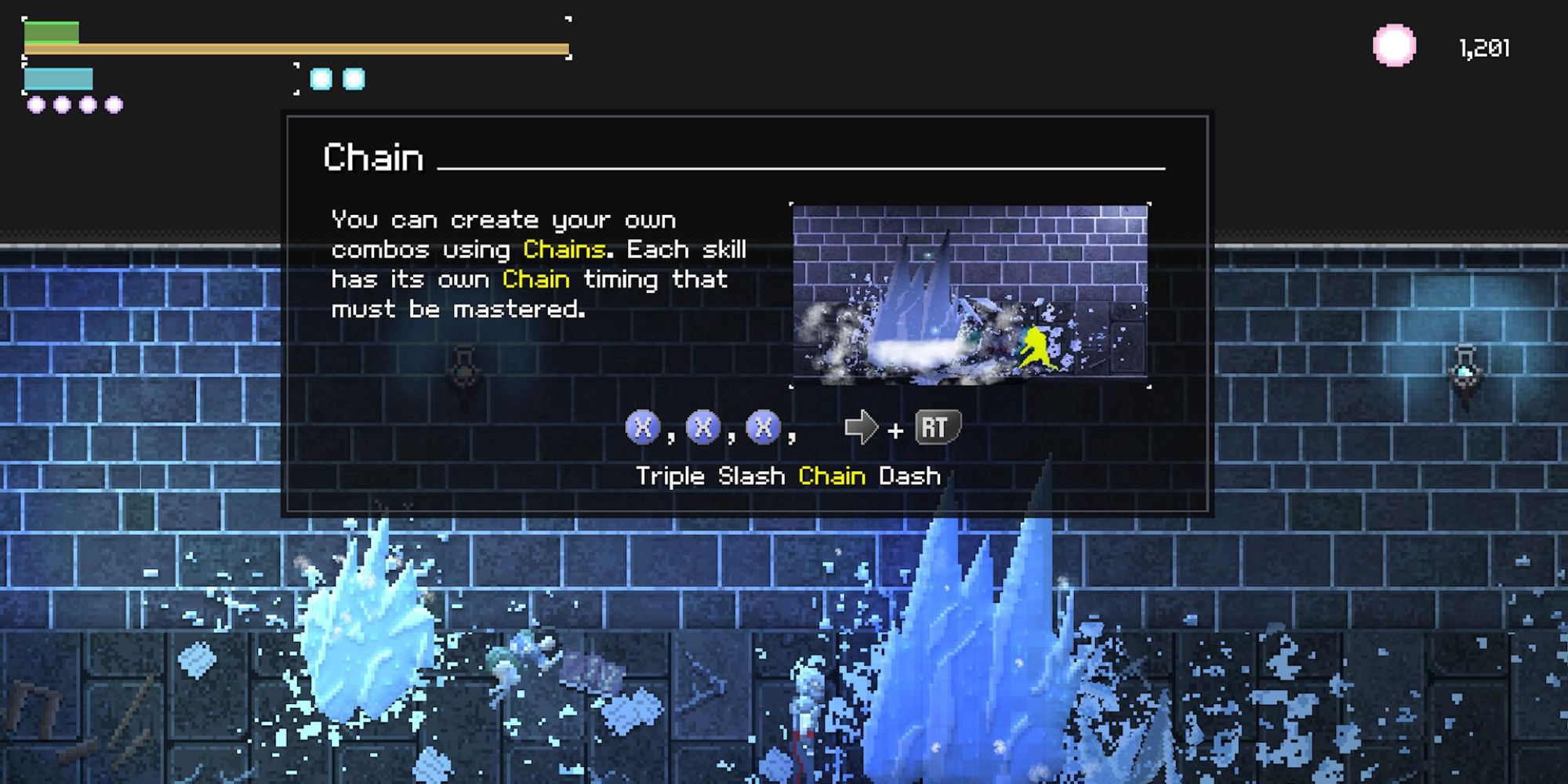 Unsouled is a fast-paced and kinetic action game that heavily relies on successful chains, combos, and quick movements in order to stay alive. The Fallen Prince is a nimble and powerful character but he can also die quite quickly. Dealing with the hordes of baddies in this game requires you to get to grips with chains and combos.

Essentially, chains are completed by adding one attack or movement to the next in rapid succession. For example, you can perform multiple sword attacks in combination dashes to really lay the smackdown on foes. Things do get a bit more complicated as special soul abilities are unlocked and used, however, the game does have an auto-chain feature for those who want some extra assistance. 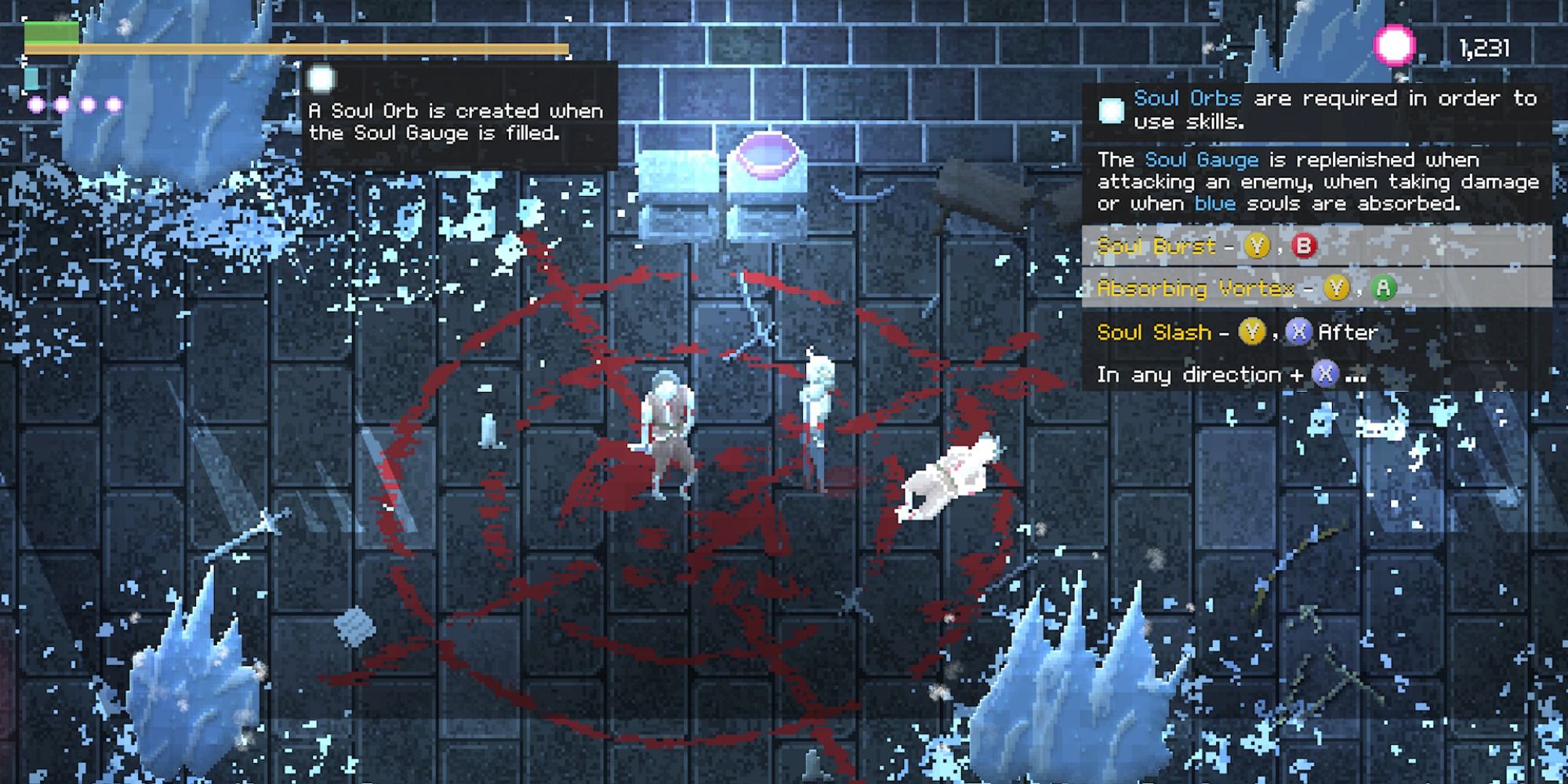 Soul Orbs are special souls that lead to filling up your soul gauge. Souls orbs are obtained through defeating enemies and can be absorbed either through a special move or by holding down a specific button. To use the game's more in-depth and comprehensive skills, soul orbs are needed.

To activate the different soul orb abilities, you first need to press the soul button followed by another skill-specific button. Doing so will ensure a powerful soul move is chained with other attacks or dashes. It's quite complicated at first but does make more sense the further you progress in the game.

4 The Power Of The Ghost Orb System 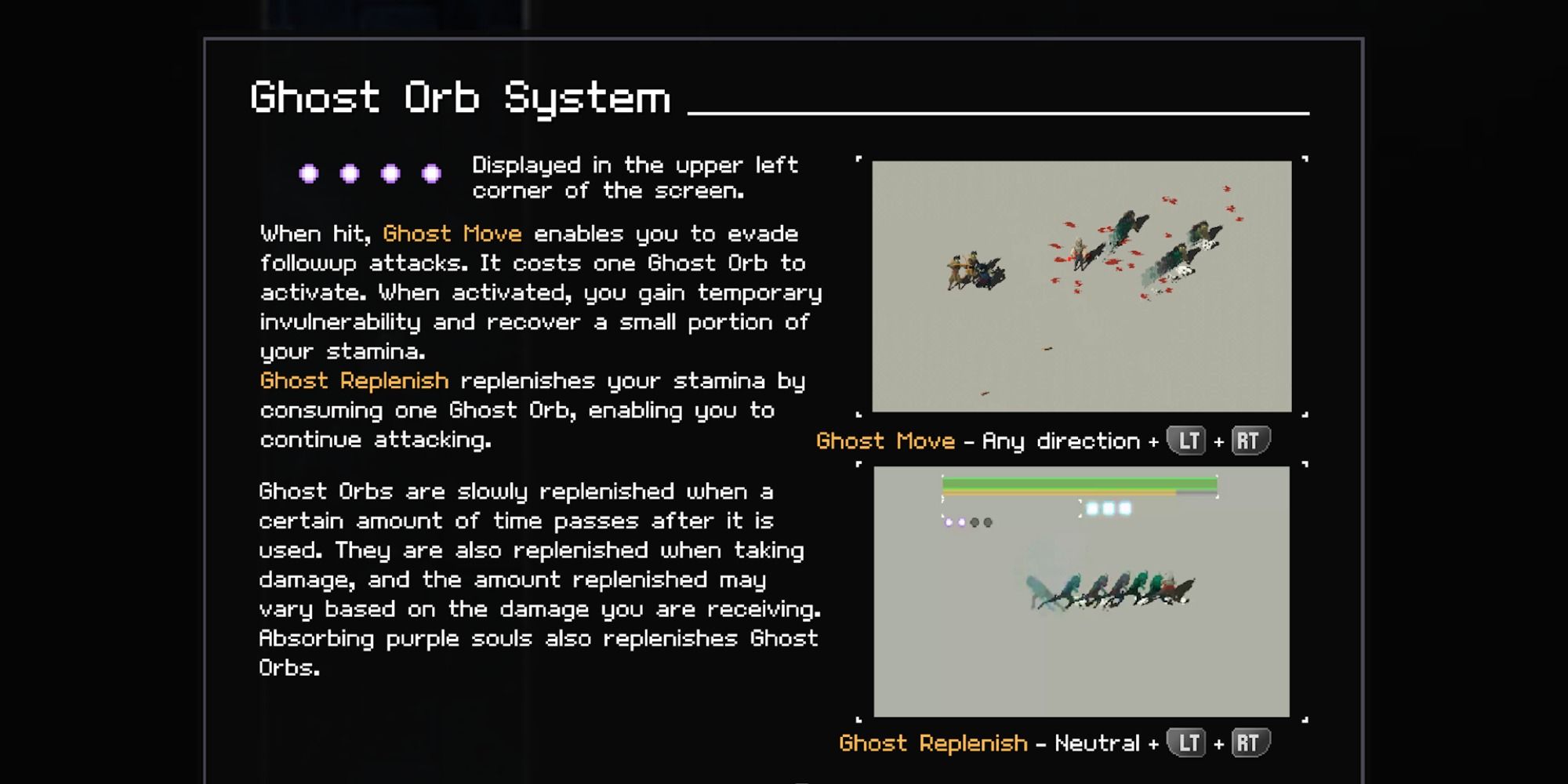 Yet another orb system to master in Unsouled is that of the Ghost Orb System. The ghost orb system is essentially a way for you to move swiftly through harmful areas or substances. The ghost orb move essentially makes you invulnerable and invisible for a very brief amount of time, just enough to get out of harm's way.

Much like soul orb skills, the ghost orb move requires one soul orb, something that is denoted in the upper left corner of the screen. Similar to a regular dash, the ghost move makes you move through an object or enemy in order to stave off damage. 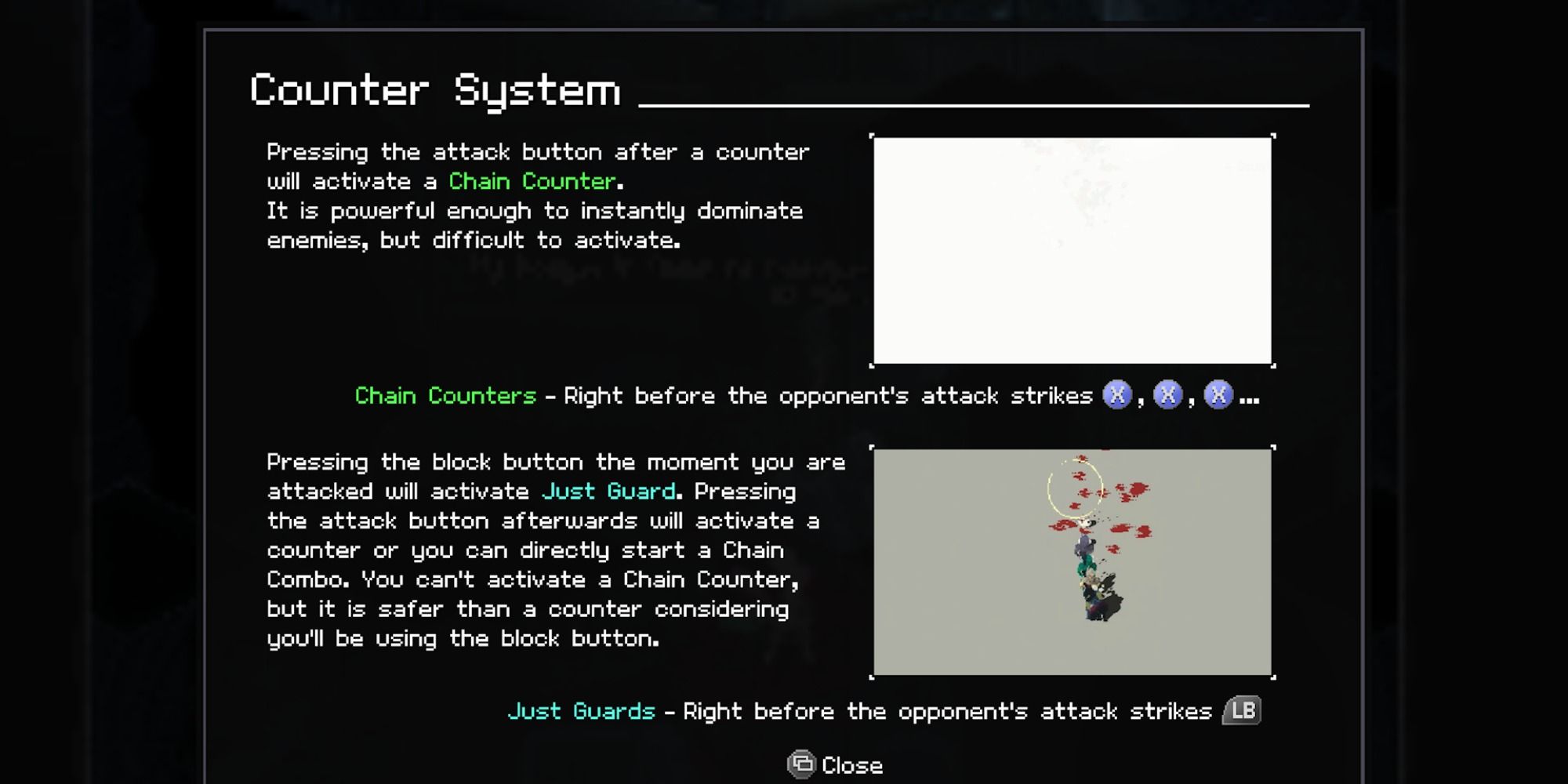 As you might imagine from a game that relies on thoughtful combat and chains, countering is also another skill that you should become accustomed to in order to stay alive just a bit longer. Countering in Unsouled really isn't all that complicated but certainly deserves to be mentioned, mostly because you will be using this skill very early on in the game.

Countering is handled via the quick press of a button right after an enemy gets ready for an attack. There is a very short window of time to counter, however, it's marked by a quick flash of the enemy's weapon.

2 Practice In The Abyss 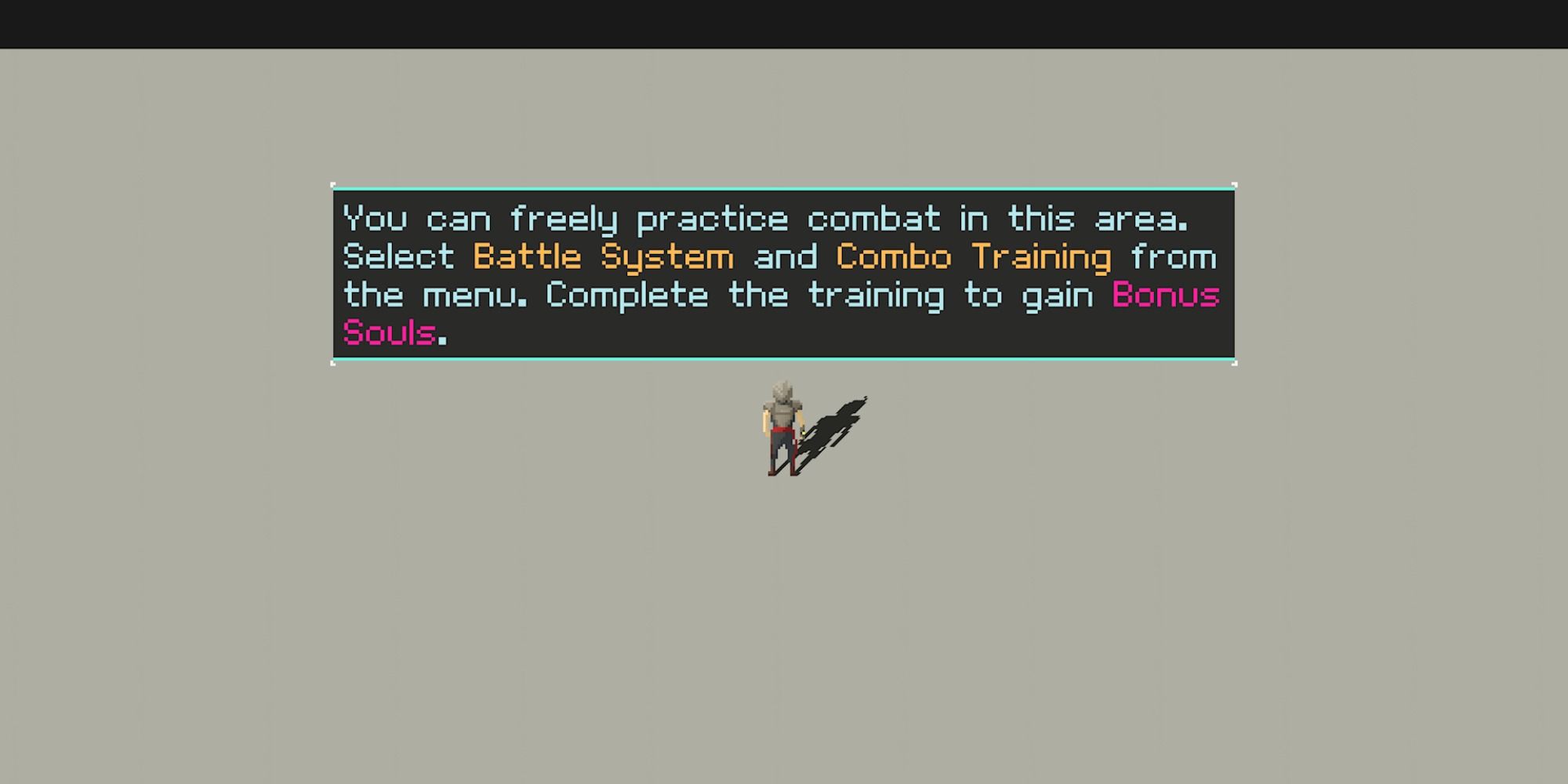 If you happen to get a bit too overwhelmed by the massive amount of things to remember in this game, namely, chains, dashes, soul orbs, passive souls, ghost orbs, and the like, then worry not, you can freely practice your skills in the abyss.

The abyss is a wonderful practice space that allows you to try out new chains, soul skills, and movements. There isn't any threat in the abyss so it's encouraged to practice here as often as possible. The best way to access the abyss while playing is through Gradiva Statues or from the menu.