Any dime store villain can own a castle — it's not that impressive. A real sign of power and royalty is owning a castle that spits in the face of the laws of physics. For those who are too good to share the filthy ground with those beneath them, nothing but a gigantic floating castle will do.

Floating castles aren't always the exclusive territory of villains, but generally speaking, it takes a villain or one with villainous sensibilities to really make the most out of non-grounded real estate. Top-shelf features usually include mountain artillery, giant hanging chains, weaponized weather patterns, and other great options for resale value. 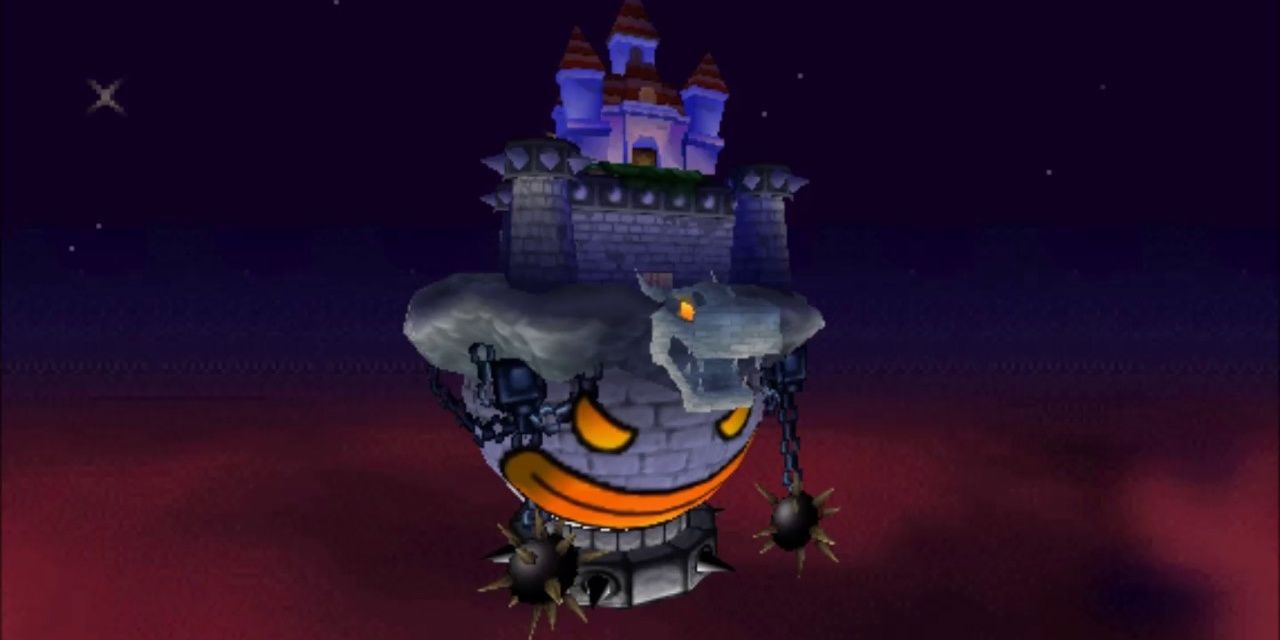 Bowser has owned a lot of different castles over the years. Perhaps it's because Mario keeps wrecking them, but each successive castle seems to be even bigger and grander than the one before it. One particularly stunning example of this was the castle he utilized in Paper Mario: a gigantic, floating stone fortress cast in the image of his classic Koopa Clown Car.

Considering the castle rises up out of the ground beneath Peach's castle at the beginning of the game, Bowser presumably used the power of the Star Rod to manifest the entire thing right underneath at a moment's notice. Either that, or he dug a really deep hole and constructed it from scratch underneath. You gotta praise his commitment to the bit either way. 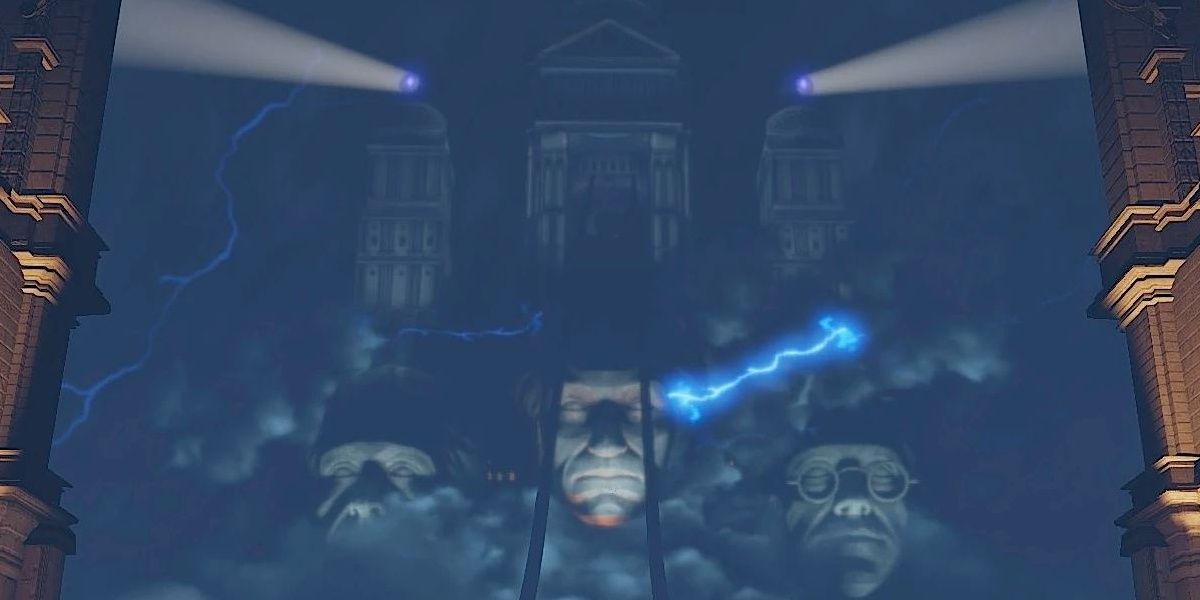 While not technically a "castle" in the literal sense, Zachary Comstock's house and base of operations in BioShock Infinite definitely fits the bill of a floating castle in every other sense. It's gigantic in size, intricately crafted, and repels intruders with both weaponized weather phenomena and the stalwart guardianship of the Songbird.

It's a pretty intimidating sight when Booker first sees it in the present day, but when he's whisked through a Tear into the future, it's become even more offputting, having been converted into a reeducation center intended to purge all residents of Columbia of any signs of rebellion or sin. It didn't work out. 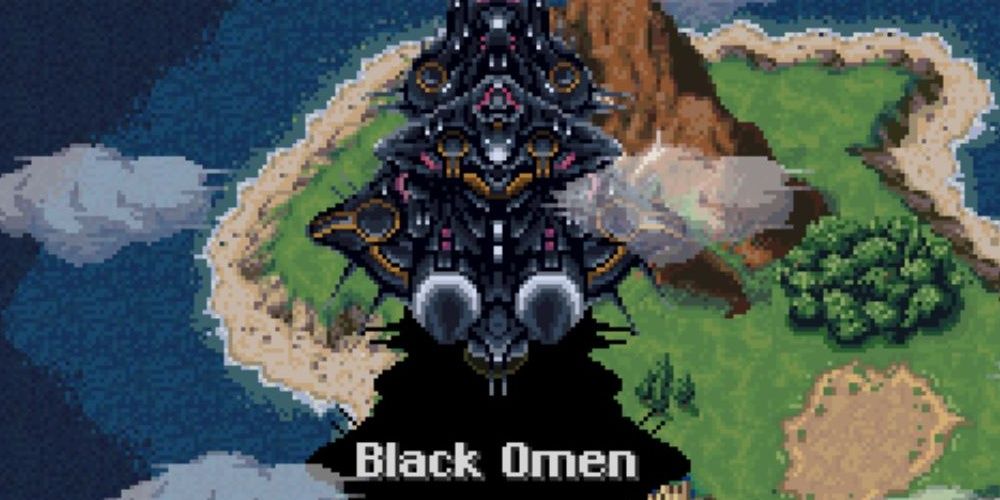 Formerly the Ocean Palace and home to the Enlightened Ones in eons past, the Black Omen was revived as a floating fortress with the power of the Mammon Machine. Queen Zeal constructed the Black Omen in this way to wait out the passage of time until the arrival of Lavos in 2300 A.D. so she could siphon the beast's power as it emerged.

Perhaps the most unsettling thing about the Black Omen is that it exists, floating and unchanged, across nearly all of Chrono Trigger's time periods. Since it originally takes to the sky during the Dark Ages as a direct result of Crono and company's actions, nobody in any time period past that pays it any particular mind. After all, from their perspective, it's always been there. 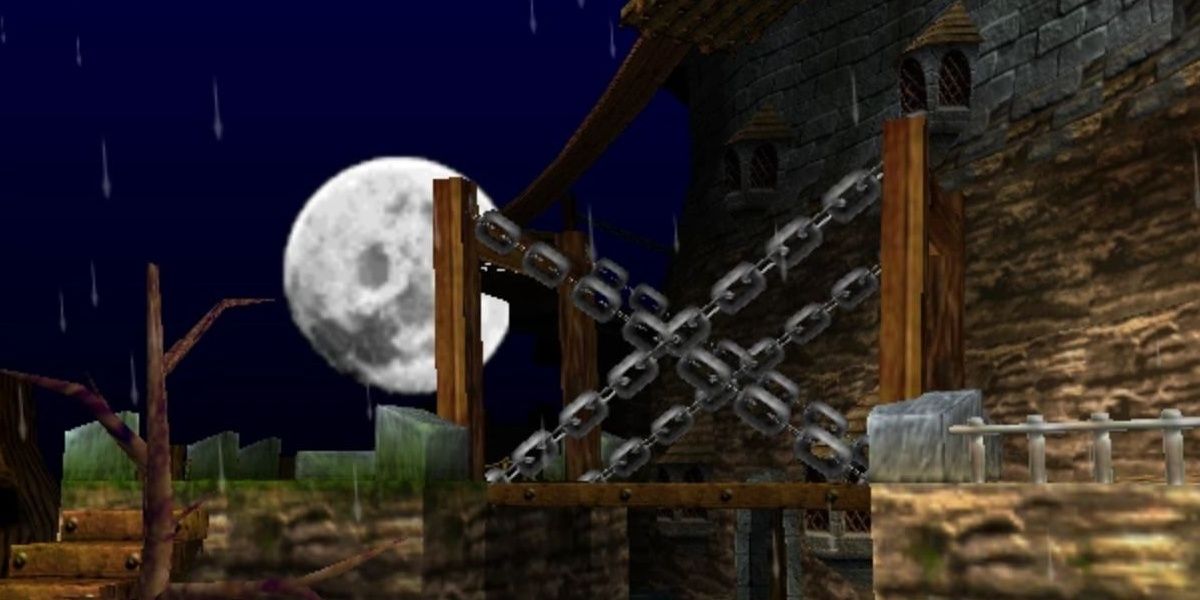 If there's one thing that King K. Rool and the Kremlings have proven time and again, it's that they are willing and able to set up a base of operations just about anywhere they can reach. Case in point, through the power of teleporter technology, they discovered the derelict Creepy Castle floating aimlessly in the night sky.

The castle itself was apparently inhabited at some point, since A: it features a burial crypt, and B: it is extremely haunted, but that doesn't seem to bother any of the Kremlings working there. Just make sure you don't fall off the castle walls, because it's a long way down. 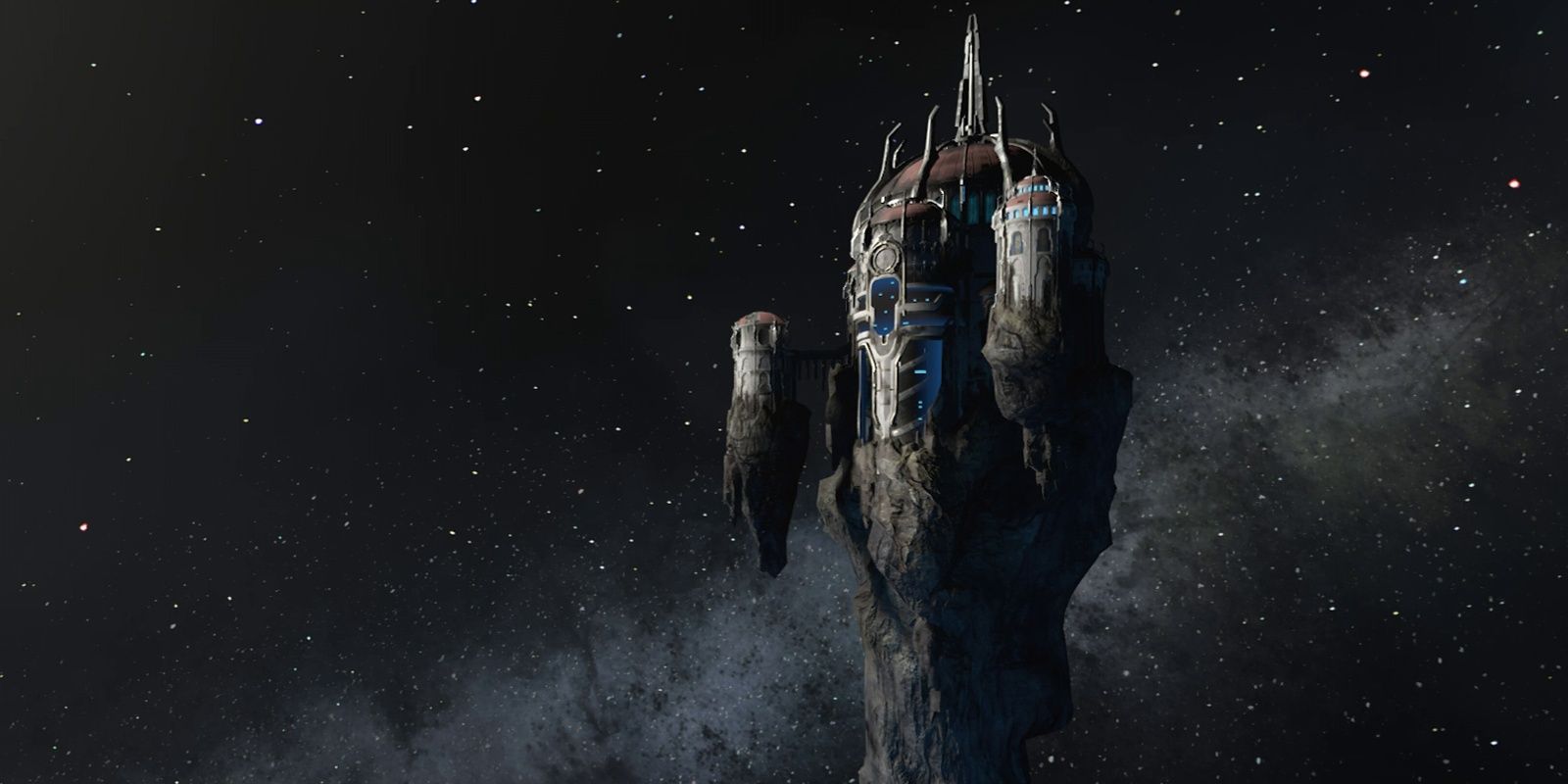 One of the few non-villainous examples on this list, the Fortress of Doom is a prime piece of space-faring real estate acquired by the Doom Slayer sometime between Doom and Doom Eternal. How exactly he came to own a giant floating space castle is never elaborated upon, but it's probably a safe bet he killed someone or something for it.

The Fortress of Doom features everything a modern Slayer could want. Not only is there plenty of storage for both armor and weaponry, as well as an advanced teleportation system, but there's also a surprisingly comfy rec room where the Slayer can play video games, peruse his collection of books, and spend time with his pet rabbit, Daisy.

4/9 The Castle That Never Was – Kingdom Hearts 2 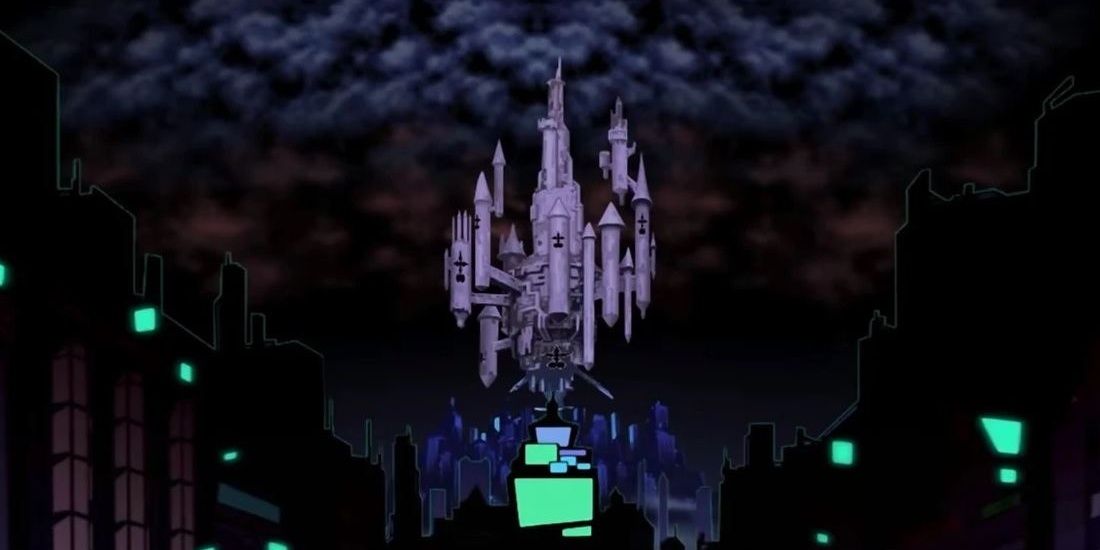 The main base of operations for Xemnas and the members of Organization XIII, the Castle that Never Was towers above the mysterious Dark City, a world based on the very precipice between the realms of light and darkness. It is here that the Nobodies are closest to the power of Kingdom Hearts, and where they sought to create an entirely new Kingdom Hearts of their own.

While Nobodies lack hearts, and therefore emotions, their memories of their time as Somebodies let them know what they like. As such, the Castle That Never Was provides some basic amenities, such as bedrooms, a kitchen, a common room, and a meeting room, albeit all rendered in extremely angular, monochromatic designs. 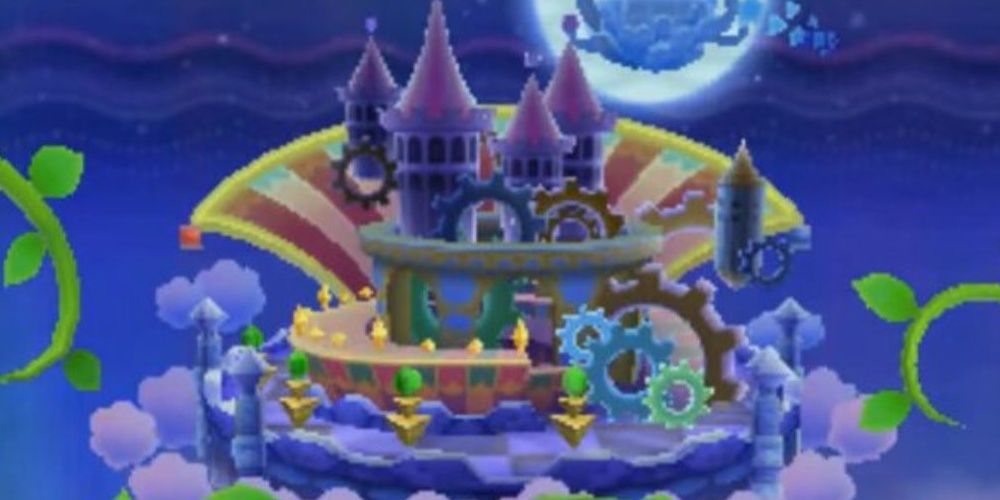 Plant Popstar sure has the strangest tendency of attracting despots and tyrants. Though, technically, Queen Sectonia's palace, the Royal Road, has existed at the top of Floralia's floating islands for as long as Popstar has been around. Befitting its insectoid occupant, the Royal Road is an impressive, if not somewhat vain, combination of natural foliage and swooping feudal-style design.

It's from the Royal Road that Queen Sectonia rules over Floralia with an iron fist, siccing her minions on any who would dare to oppose her. Amusingly, her conflict with Kirby was more of a coincidence than anything; the Dreamstalk that connected Floralia to Pop Star proper was actually planted by the Sky People, who wanted Kirby to come up and dethrone the Queen.

2/9 The Palace Of Twilight – The Legend Of Zelda: Twilight Princess 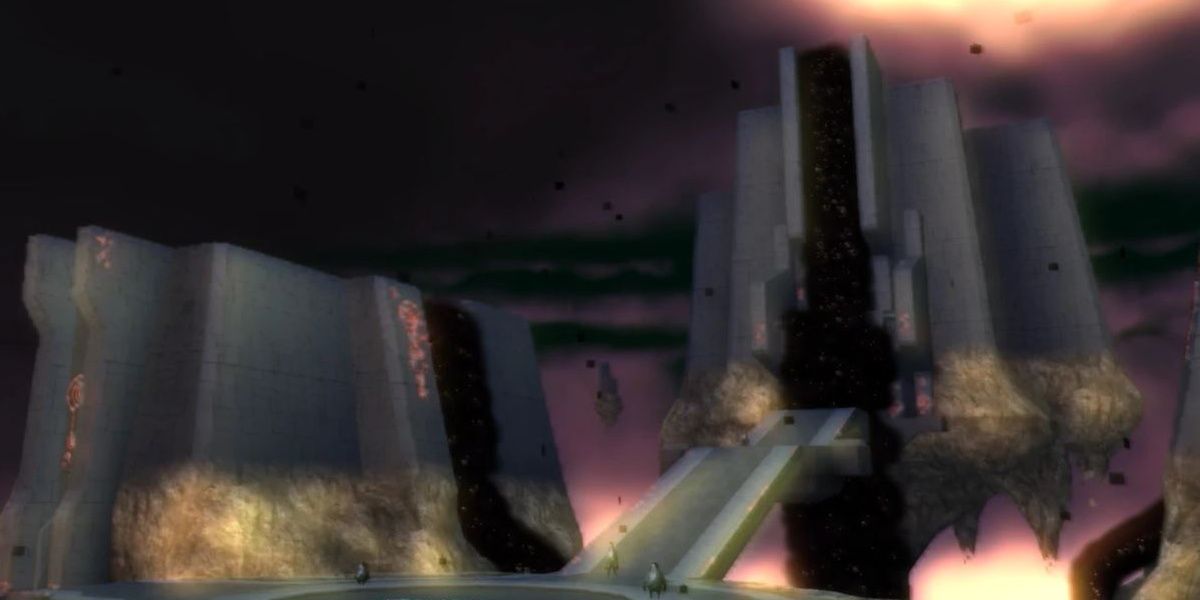 The Twili people didn't exactly have much to work with in the seemingly infinite void of the Twilight Realm, but by gum, they made do with aplomb. The ancestral Palace of Twilight, home to the realm's royal family, is an impressive piece of architecture, carved out on of the larger floating islands of the Twilight Realm.

The inside is just as intricately designed, covered in glowing geometric patterns and powered by advanced magical technology. It was probably nice place to live, all things considered, at least until Zant staged his coup and turned the whole thing into a monument to himself. 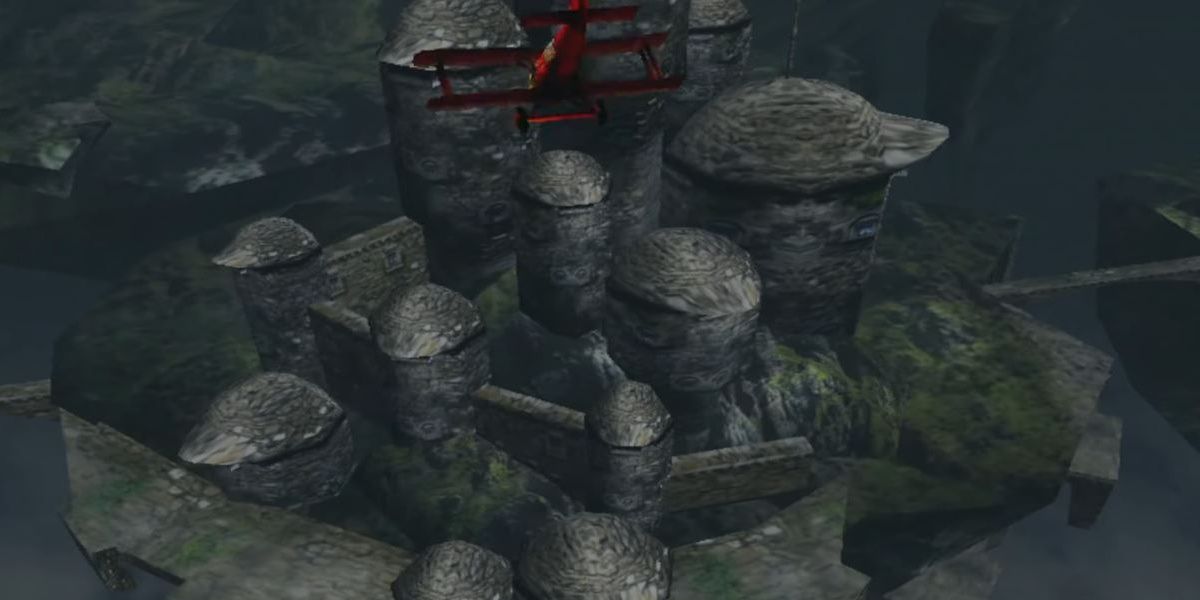 The world of Power Stone is rife with mysterious and esoteric magics and technologies across multiple countries and cultures. That said, most of these phenomena are rooted in local norms and legends. However, out in the middle of the ocean, there is an entity that defies all known logic, and the dark castle he inhabits.

The giant, monstrous man known as Dr. Erode commands his castle from a gigantic, opulent dining room, dragging anyone unlucky enough to fly by into the castle's dungeons. The towers of the castle contain entire worlds, all to halt the progress of any would-be escapees.