Once again, Amicia and Hugo de Rune are facing a variety of dangers in A Plague Tale: Requiem. Having survived the Inquisition in the first game, the de Rune children thought they could live peacefully until the Macula in Hugo began to activate. Now, Amicia and Hugo are on the hunt for a possible cure.

With the rats overtaking La Cuna, Amicia has decided that staying on the island is no longer a viable option. However, this chapter throws yet another wrench into their plans, and a new evil rises. This guide details The Life We Deserve, the 12th chapter in the game and a relatively short one compared to others. 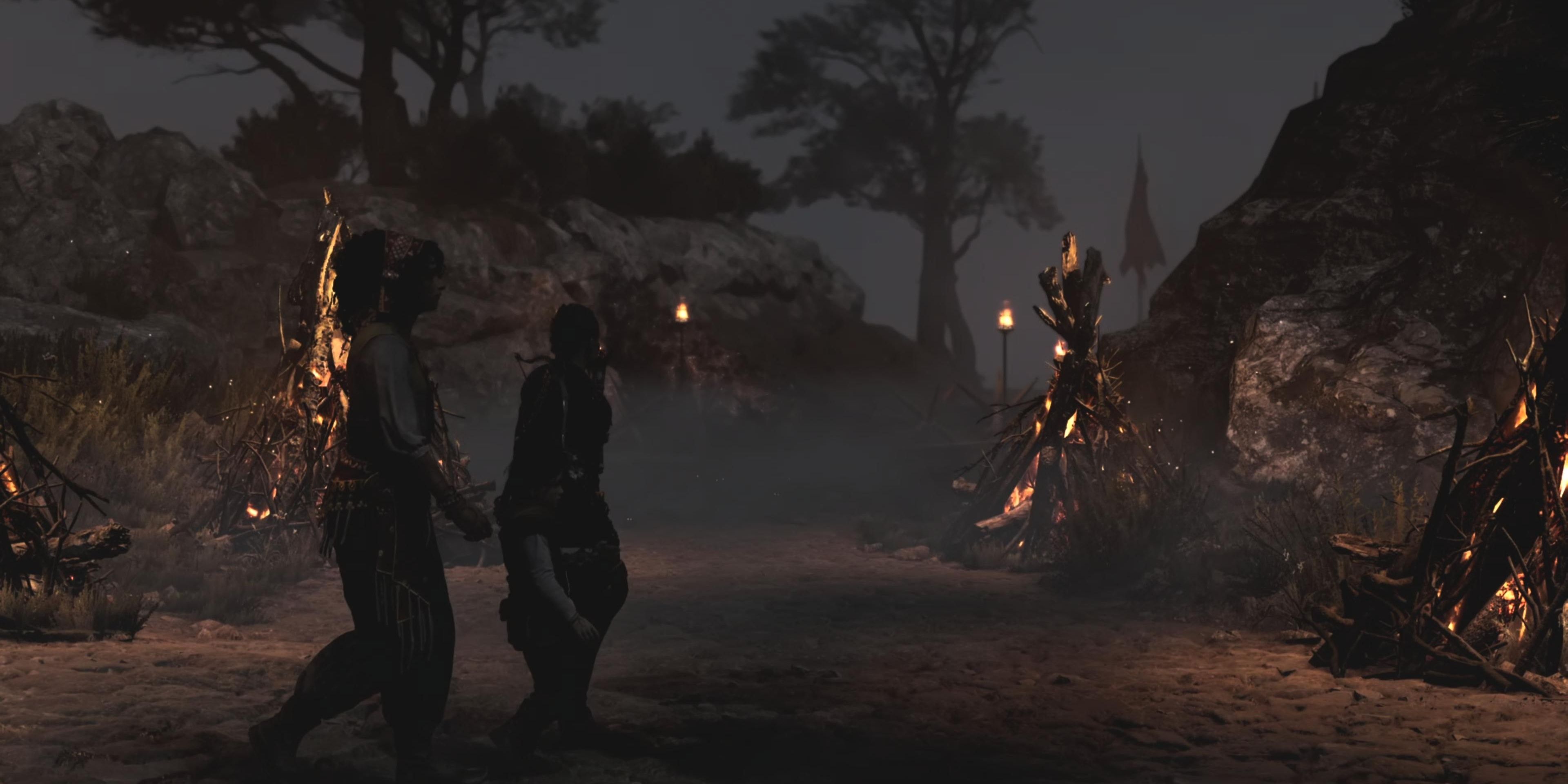 Following their escape from the ruins, Amicia, Hugo, and Sophia are heading toward the harbor to leave the island. Run down the path to the left and drop from the ledge.

Pick up the smoldering lute from a corpse nearby, and light it on the flames to walk through the rats and reach the fiery piles of sticks.

A cutscene begins, and Sophia will go off to the harbor on her own, while a guard will escort Amicia and Hugo back to the palace. Follow the guard up the path, running past the other guards fighting against the rats. Once you reach the palace, another cutscene occurs with the children being reunited with Beatrice and Lucas. 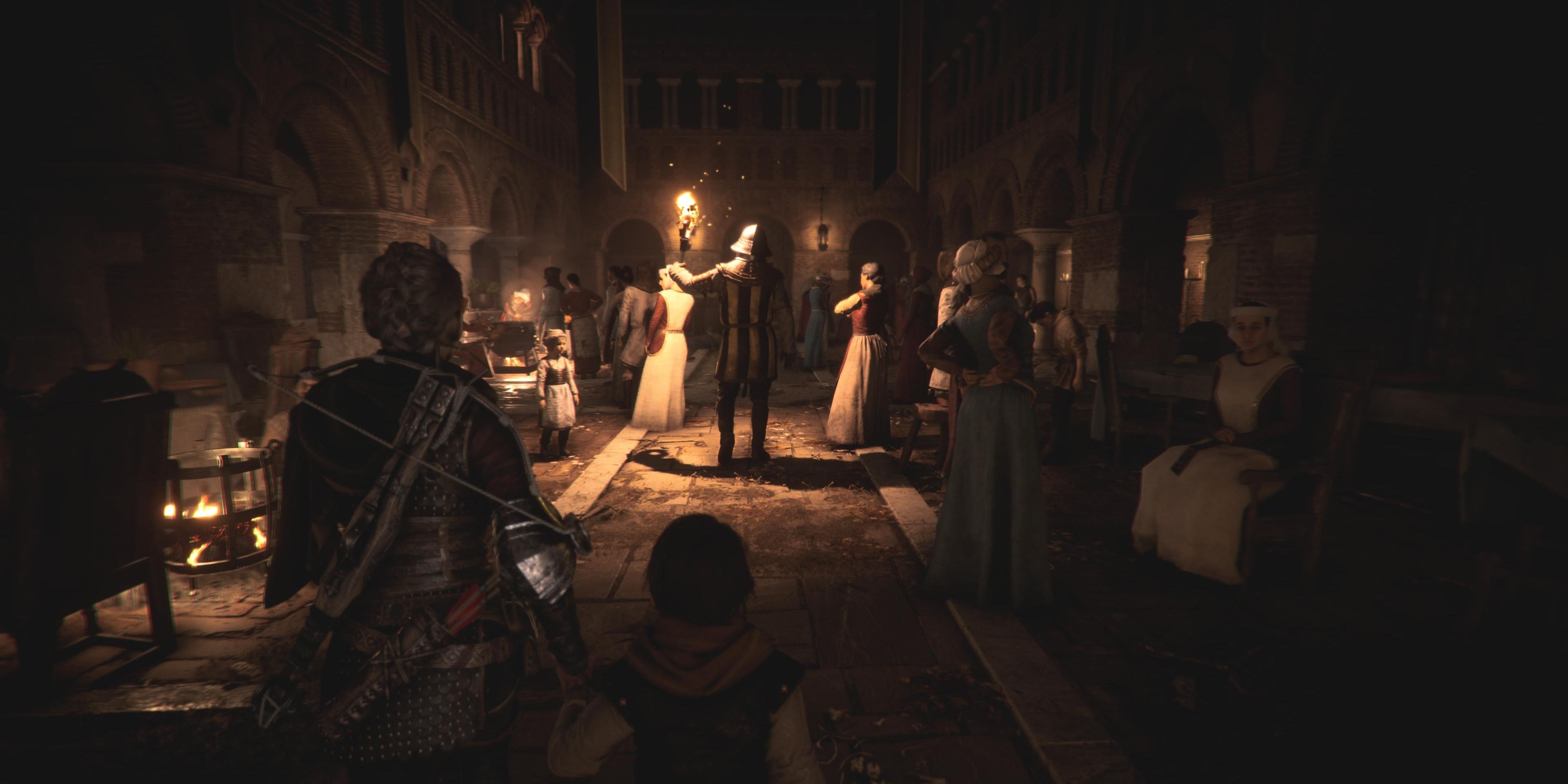 A guard tells them the Count wishes to speak with Amicia. Follow the guard through the castle to find Victor, then follow Victor as he leads you down several hallways. Another cutscene happens, and Victor is trying to kill Amicia. 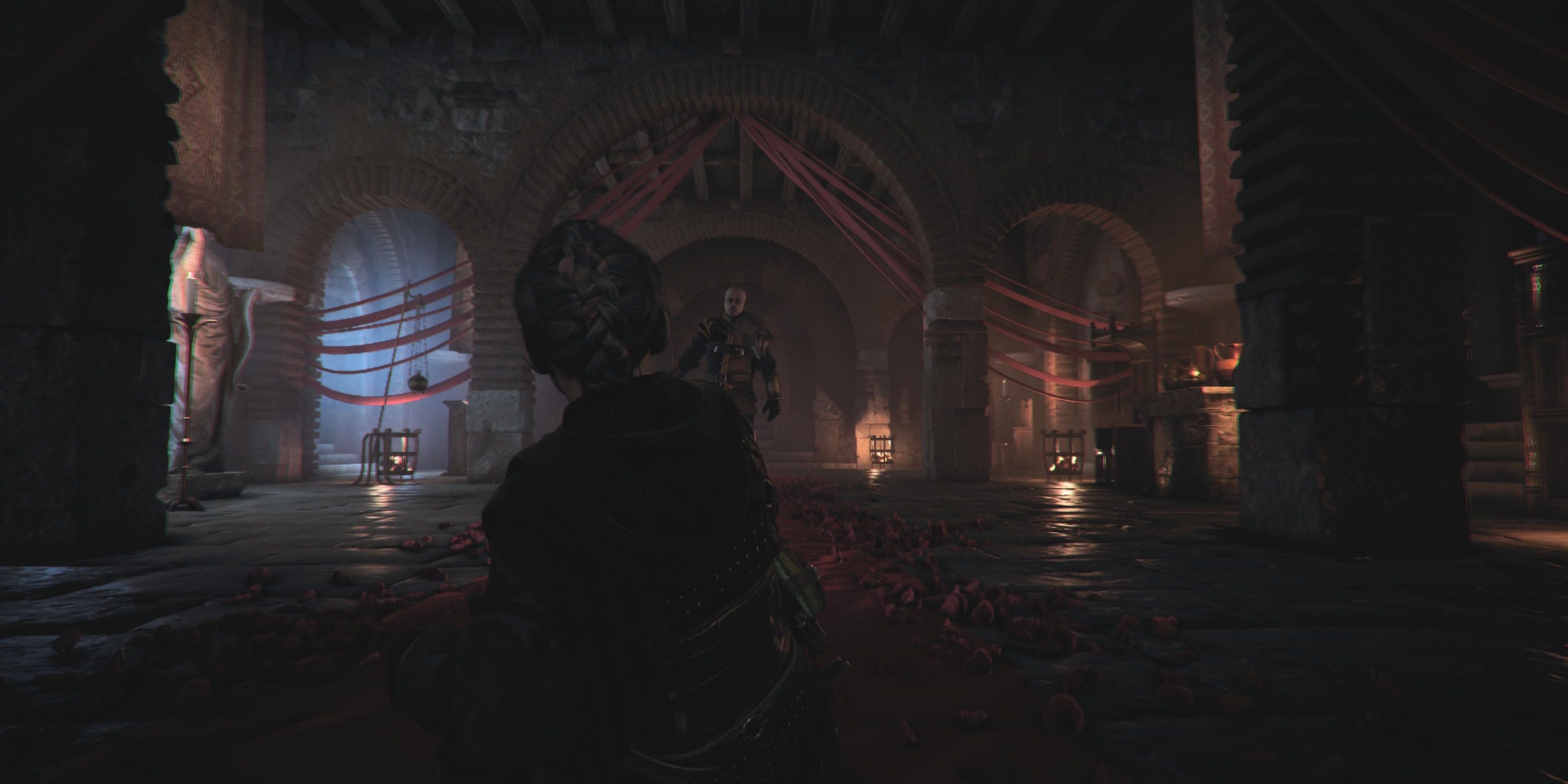 After Victor kicks Amicia down the steps, crawl backward on the ground away from the Count and complete the quick-time event to knock him away. Run out the side door to the left and quickly head through the courtyard to the door on the other side.

It’s locked, so go down the steps and head through the path on the right. Amicia hides, but Victor manages to find another way in, and a maid tells Victor where you’re hiding.

Making noise will alert Victor of your position, and if he finds you, it's difficult to hide again.

Leap over the counter on the left and crawl under the table to hide from Victor. After he walks past you, crawl from under the table and turn right to loop around the tables to head out the door.

Another palace guard will yell and give away your position, forcing you to turn left. Victor appears at the end of the hall, so you need to quickly run through the door to the right and squeeze through the narrow passage on the left.

Continue running down the hallways until Victor kicks his way through another door and forces you into a room full of plants. Run around the tables to exit the room on the other side, then head through the narrow passages until you reach a door. 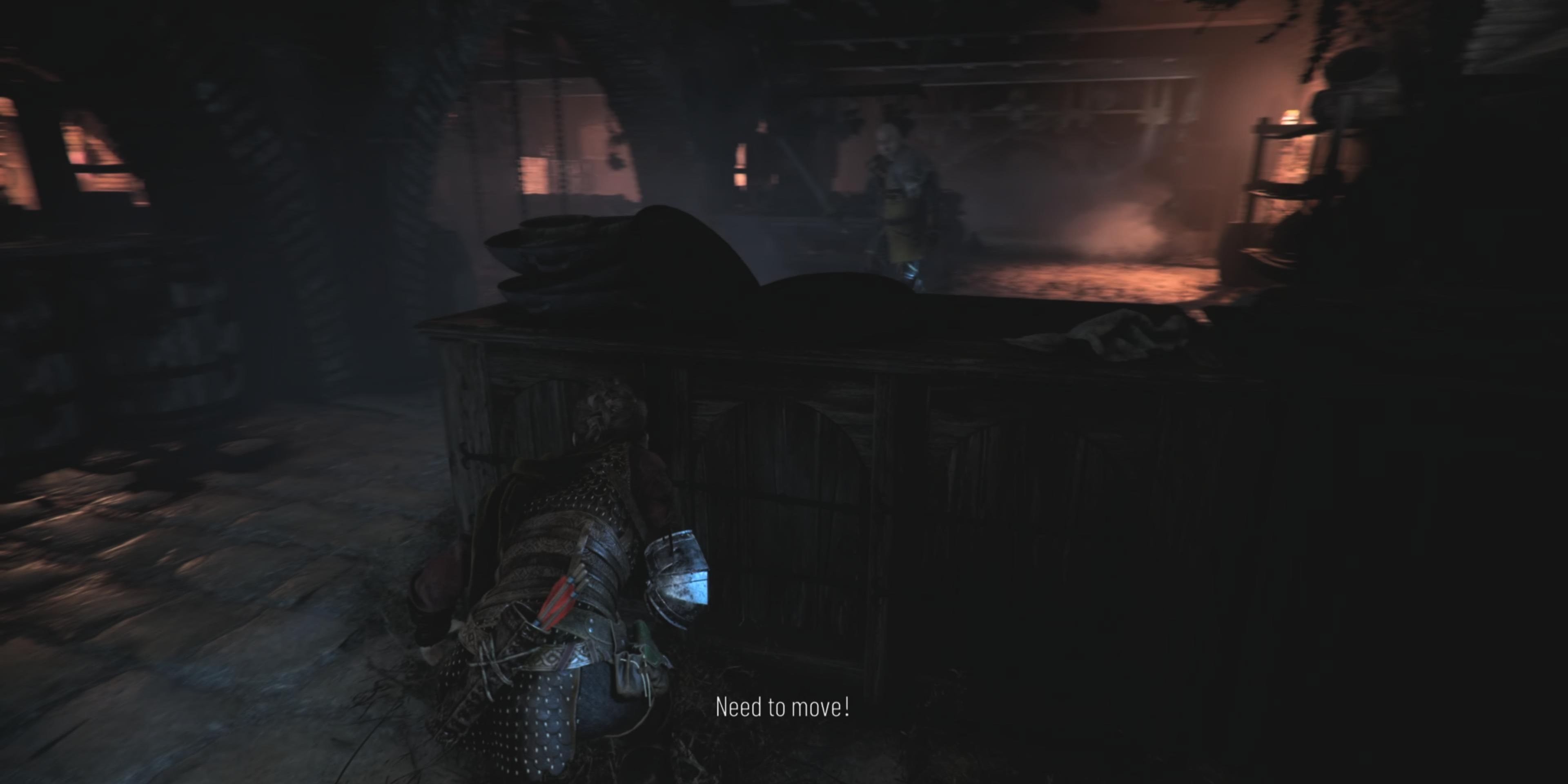 Amicia will be in an open area with many tables to hide under and side rooms. On either side of the room, there will be a crank that Amicia needs to turn to lower the gate and escape the room.

Once you start turning the crank, Victor will burst into the room. Release the crank, and instead of trying to hide from the Count, get his attention and lead him into one of the side rooms.

Then, run through the narrow passages to access a side exit that allows you to run around the side and temporarily lock Victor in the room. 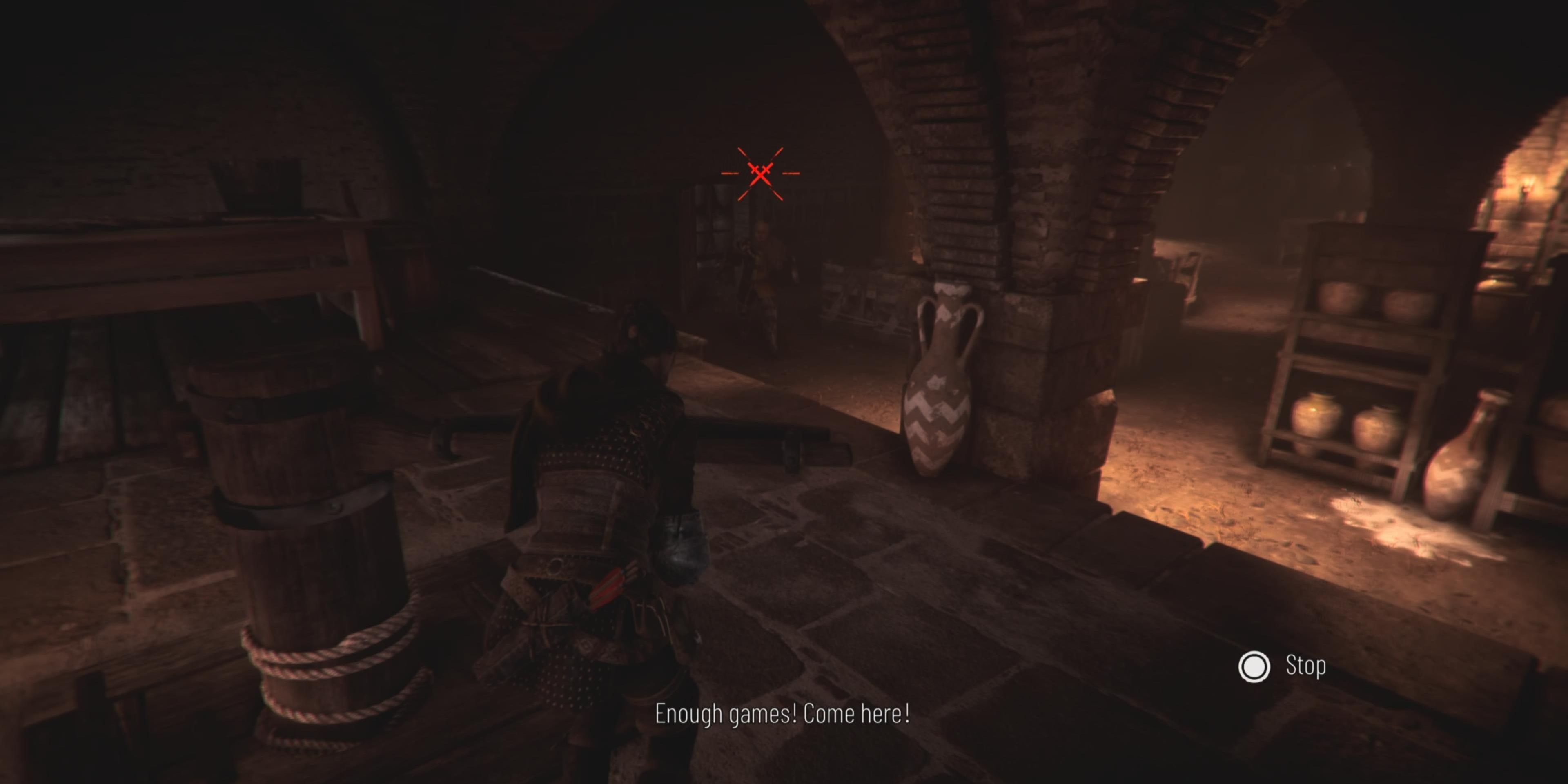 With Victor locked, you need to quickly run back to the crank and turn it as much as possible until Victor breaks out of the room. Complete this process a few times to fully lower the gate and run through the door, locking Victor behind you. Walk down the long hall and up the steps to emerge outside, which will trigger a cutscene. 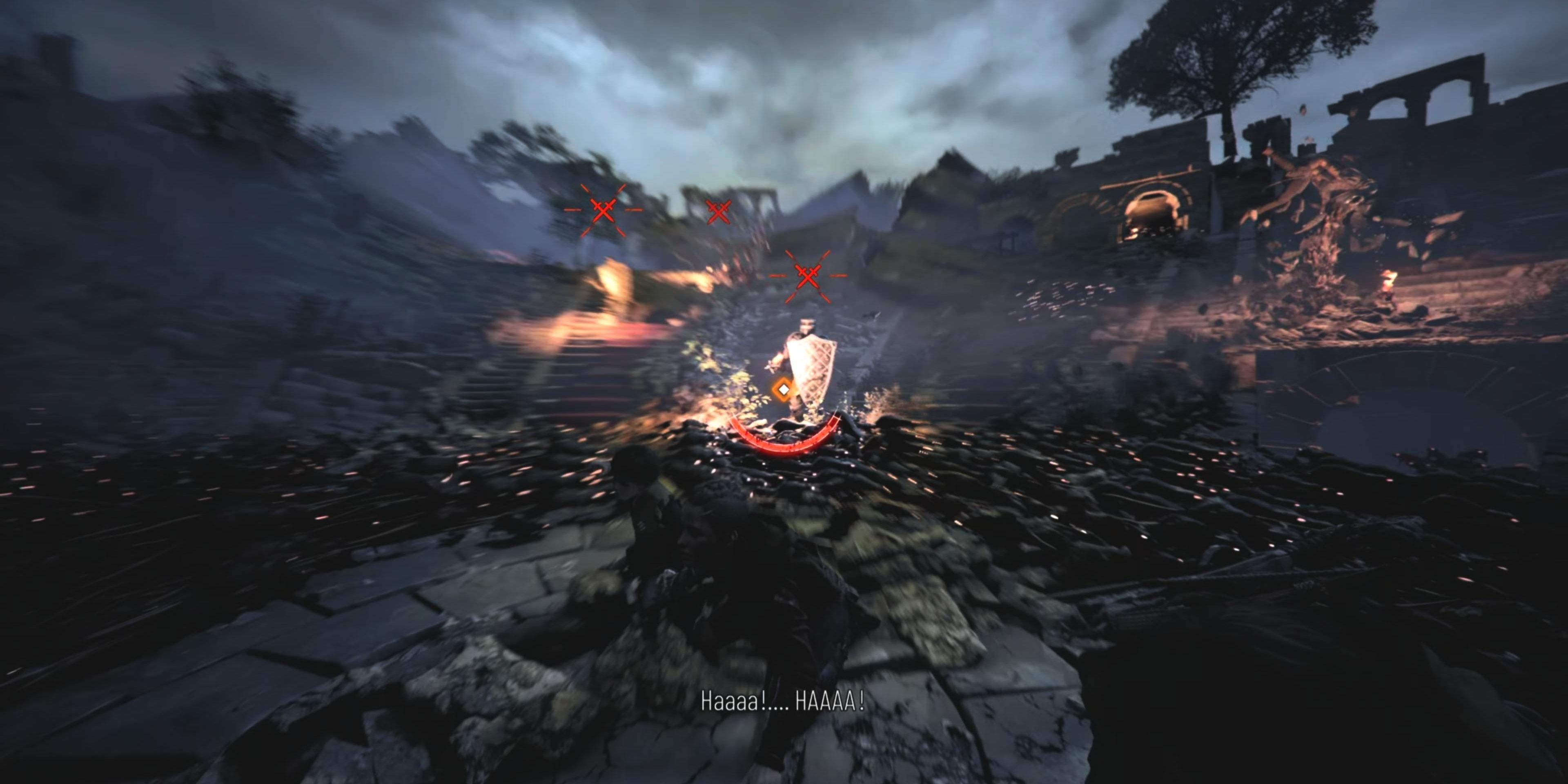 After the scene, you’ll have control of the rats. Guards will appear through the many entries around the arena, so keep surveying around you and send the rats to attack them.

Once Hugo reaches his limits, send the rats to kill the Countess, triggering one last cutscene before the end of the chapter.