A Space for the Unbound starts with a dream-like cold open, where teenage player-character Atma and the much younger Nirmala work on writing and drawing a book together. After some unfortunate events, Atma wakes up at school in his sleepy rural town without much memory beyond knowing that the girl sitting in front of him, Raya, is his girlfriend. From here we see Atma try to figure out which reality is a dream and which is his real life, as he dives into people's hearts to either change their thought processes or help them face something from their past. He also quickly encounters several supernatural occurrences with Raya, all the while a crack in the sky grows ever larger.

Going much further into story details would ruin pretty much everything that makes this game great – but it is worth noting it’s extremely focused on some intense themes. It even opens with a content warning for abuse, violence, and suicide, leaving the question, ‘How does Space For The Unbound handle these topics?’. Thankfully, unlike some other video games using trauma for controversy and excitement, it gives them the weight they deserve, slowly building through dialogue different characters' anxieties, neuroses, and personal issues. It paints characters trying to enjoy idyllic life while dealing with their own personal demons expertly. For the most part, it’s a nuanced and deeply personal portrayal of flawed characters fighting to function when they clearly need help. One character is given surprisingly little development considering their actions cause most of this pain, but the game goes to great lengths to remind you that while everyone is worth saving, some people simply don’t want help.

When Atma ‘Spacedives’ into people's minds, these themes are interwoven into puzzles, a la Psychonauts. Here, you’ll solve puzzles and occasionally engage in the game’s combat, which is just hitting directions and face buttons before a bar empties, and then blocking at the right moment. These parts might be the weakest element of A Space for the Unbound, but the puzzles mostly strike a good balance of not being too obtuse while also being difficult enough that you feel smart solving them. They also often try to tie story elements into the gameplay to mixed results. Sometimes the game’s adventure mechanics expertly highlight narrative beats, like a series of Spacedives that take the form of courtrooms and change gameplay to something like Ace Attorney, while at other points it feels like the game is trying to force a different style of gameplay it cannot itself support. This is clearest in the combat that is obviously meant to be a simple tool for certain scenarios where you have to resort to violence, even when it feels like Atma would probably try to talk a situation out. 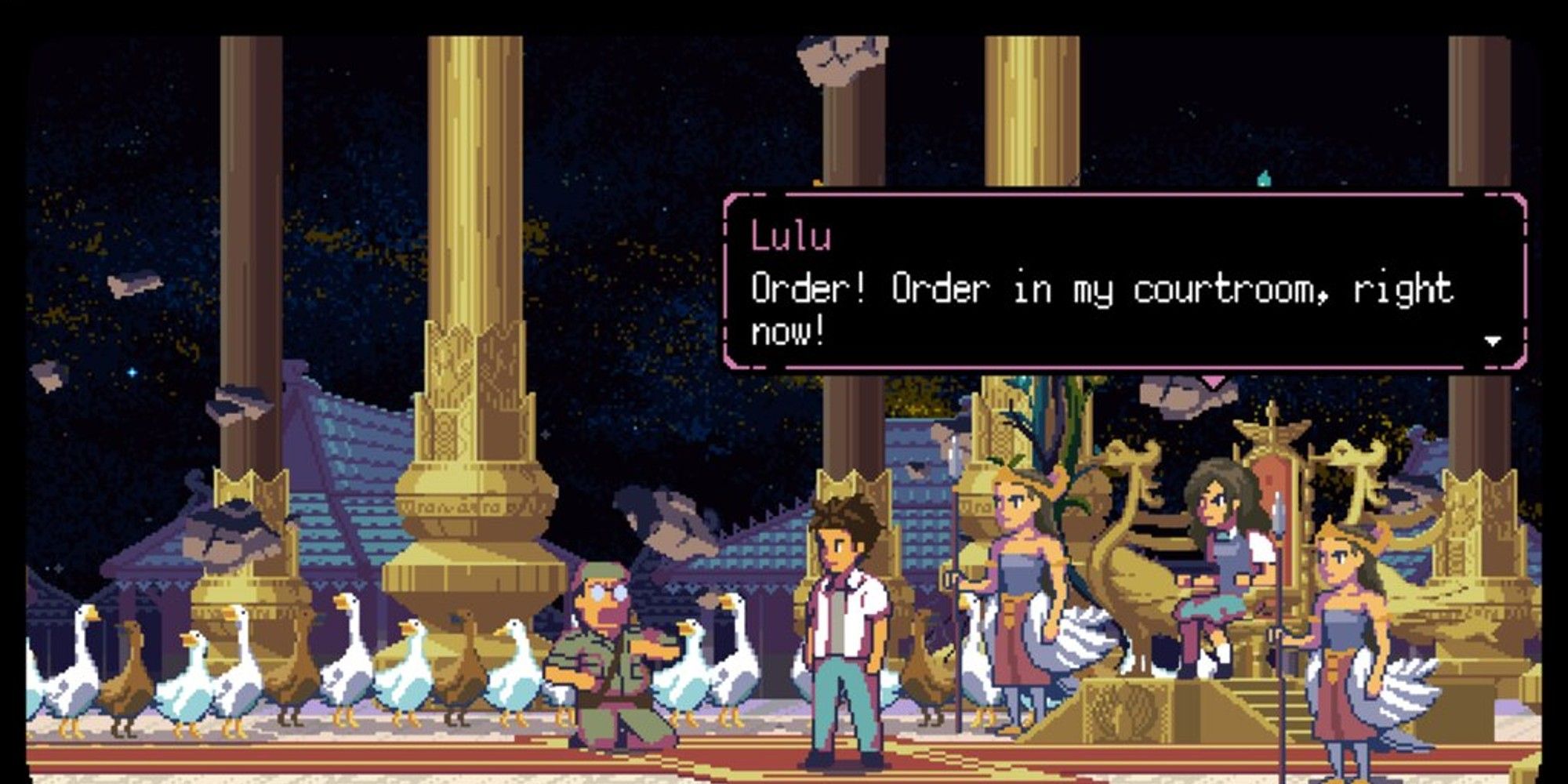 The side story around unlocking Atma’s ability to fight at an arcade full of fake machines is a great little vignette, where Atma finally confronts some bullies, but sometimes it feels like a person as thought as Atma wouldn’t resort to a fistfight so quickly. The bigger problem is that the timing of the numerous QTEs is fairly intense. For an adventure game so focused on delivering an emotional story, it's strange there wasn’t a more fitting way to present combat in-keeping with the game’s slow-paced style. At the very least it would be nice if there were options to make the timing windows more forgiving. On top of this, toward the end of the game, you will face what is basically a traditional boss fight where you have to dodge falling debris, and in a slow-moving adventure game, it just doesn't feel great.

That being said, most of the game is brilliant. Music runs the gamut from quaint fun to pulling on heartstrings at the perfect moment. The thoughtfully minimalist pixel art could tell the story without any words, yet the writing elevates the experience. A Space for the Unbound is constantly thoughtful, sometimes heartwarming, and, when it needs to be, gut-punching. As things spiral out of control and more and more supernatural aspects, time travel, and reality hoping are pulled in alongside twists, I often found myself wondering if the game was going to be able to tie all the threads of this small-town tale together. But somehow it does, for a final act which is both a stunning end and a new beginning. 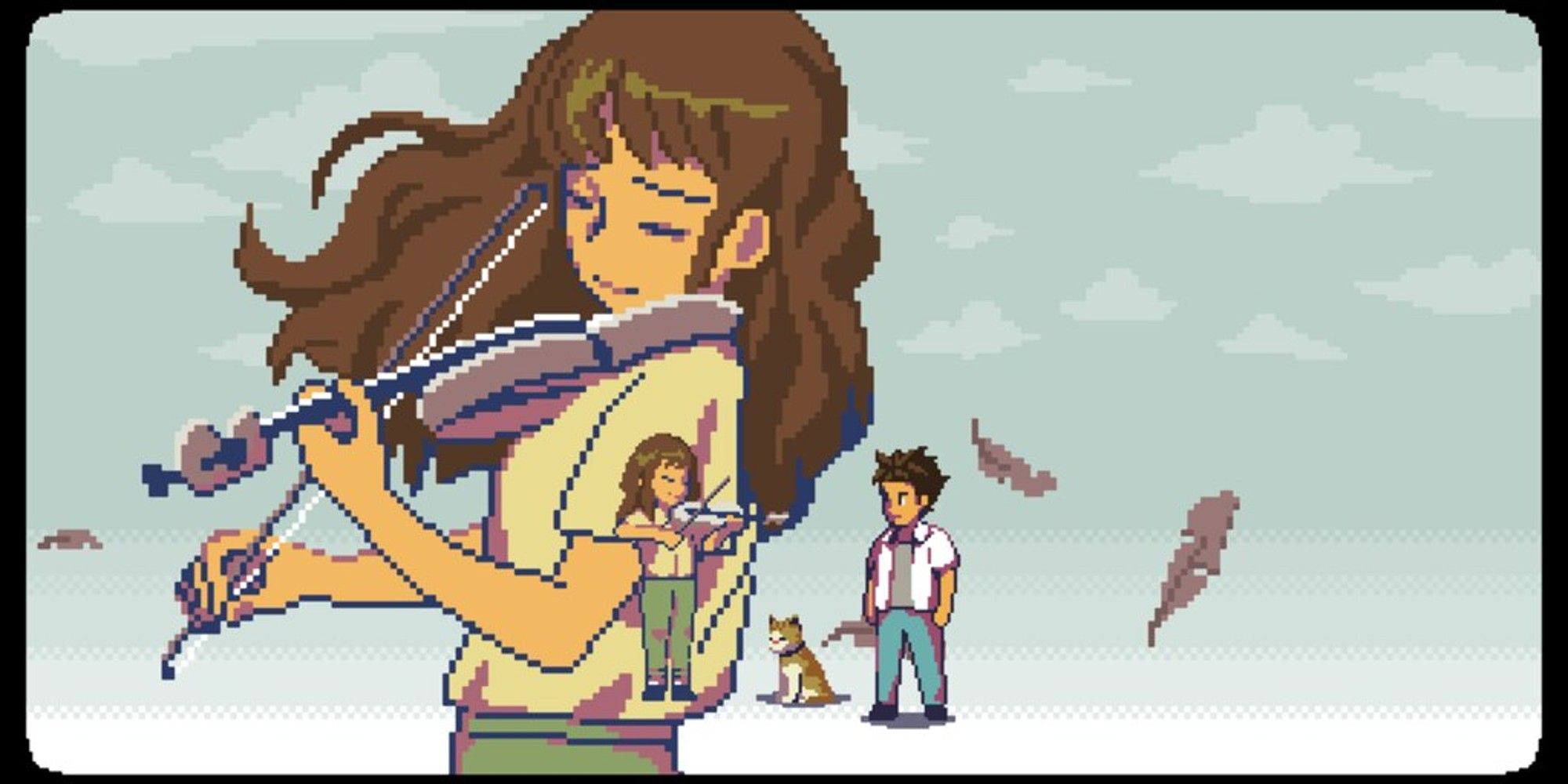 Trauma is a very strange thing. We share it across our lives, but it’s always wholly individual in nature. It’s hard to write a story about it because anyone who has gone through something traumatic has their own story to tell. However, something universal about the worst parts of our lives is how they can make us feel. A Space for the Unbound is a game about those universal feelings in the most unrelatable of circumstances, across multiple universes.

Is it perfect? No most certainly not, but neither are these characters and that’s ok too. You can love this game despite its problems and think it’s extremely important even if there are aspects of it you don’t like. People are flawed, and so is this game, but we can overcome that and still allow them to affect us deeply as we move on from them.