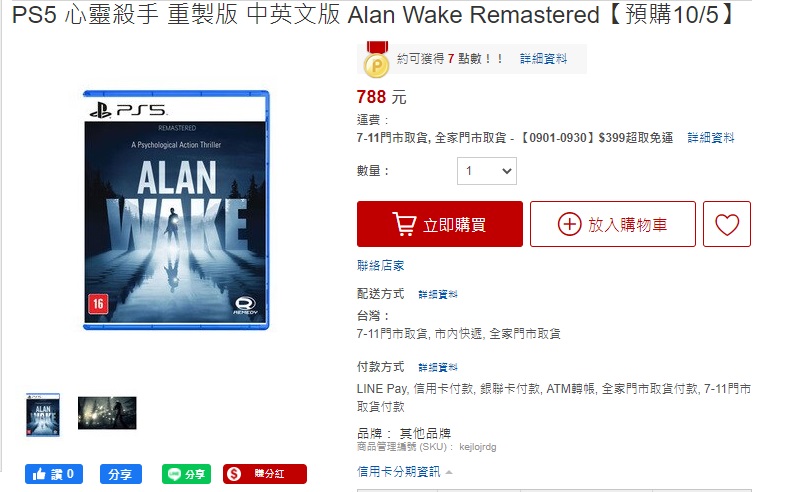 It looks to be all but confirmed that a remaster of Alan Wake is coming soon, which only makes a sequel more likely.

There has been speculation and rumours of an Alan Wake remaster for a while now, after evidence of its existence was seemingly discovered on the Epic Games Store.

And as if that wasn’t enough of a confirmation, listings for the game have now been spotted on a retail website. Admittedly, retail listings aren’t always hard confirmations, but between this and the Epic Games Store listing, it’s looking extremely likely.

Website Rakuten Taiwan had listed the remaster for Xbox, PlayStation 4, and PlayStation 5, with a release date of October 5. The listings appear to have since been taken down, but Wario64 on Twitter was able to save images of them.

The box art used is identical to the original release, so it’s probably just a placeholder since it lacks any mention of the game being a remaster. This will be Alan Wake’s debut on a Sony platform as the original game was only on PC and Xbox 360.

With a major PlayStation showcase due this Thursday it’s entirely possible that the remaster may be announced then, with respected industry figure Daniel Ahmad tweeting on Saturday that it would be announced sometime this week.

Will be announced next week

Developer Remedy already teased an Alan Wake remaster back in 2019, after it regained the rights from Microsoft, and its existence lends further credence to Remedy making an actual sequel.

Remedy recently signed a publishing deal with Epic Games for multiple games, and it’s believed that includes both a remaster and a sequel to Alan Wake.

The original Alan Wake came out in 2010 and saw the titular novelist investigating his wife’s disappearance, while simultaneously experiencing the plot of his most recent novel which he doesn’t remember writing.

It received a spin-off called Alan Wake’s American Nightmare two years later and is implied to take place in the same universe as Control, with the latter getting Alan Wake themed story DLC.