During your time in the world of ANNO: Mutationem, you encounter a number of weapons to play around with. However, grombits are a limited resource, so you won't be able to comfortably upgrade everything. Which leads to the question, which weapons are worth investing in? Thankfully, we have all the information you need to take your best step forward.

This guide will give you a rundown of every weapon type in the game, what skills are particularly useful, and give our opinion on which weapons are the most deserving of your attention. The weapons in this guide have been organized from least useful to most useful. That being said, if you are drawn to any given weapon type, don't hesitate to use it. At the end of the day, your entire armory will be viable, even if the weapons you are drawn to are not optimal. 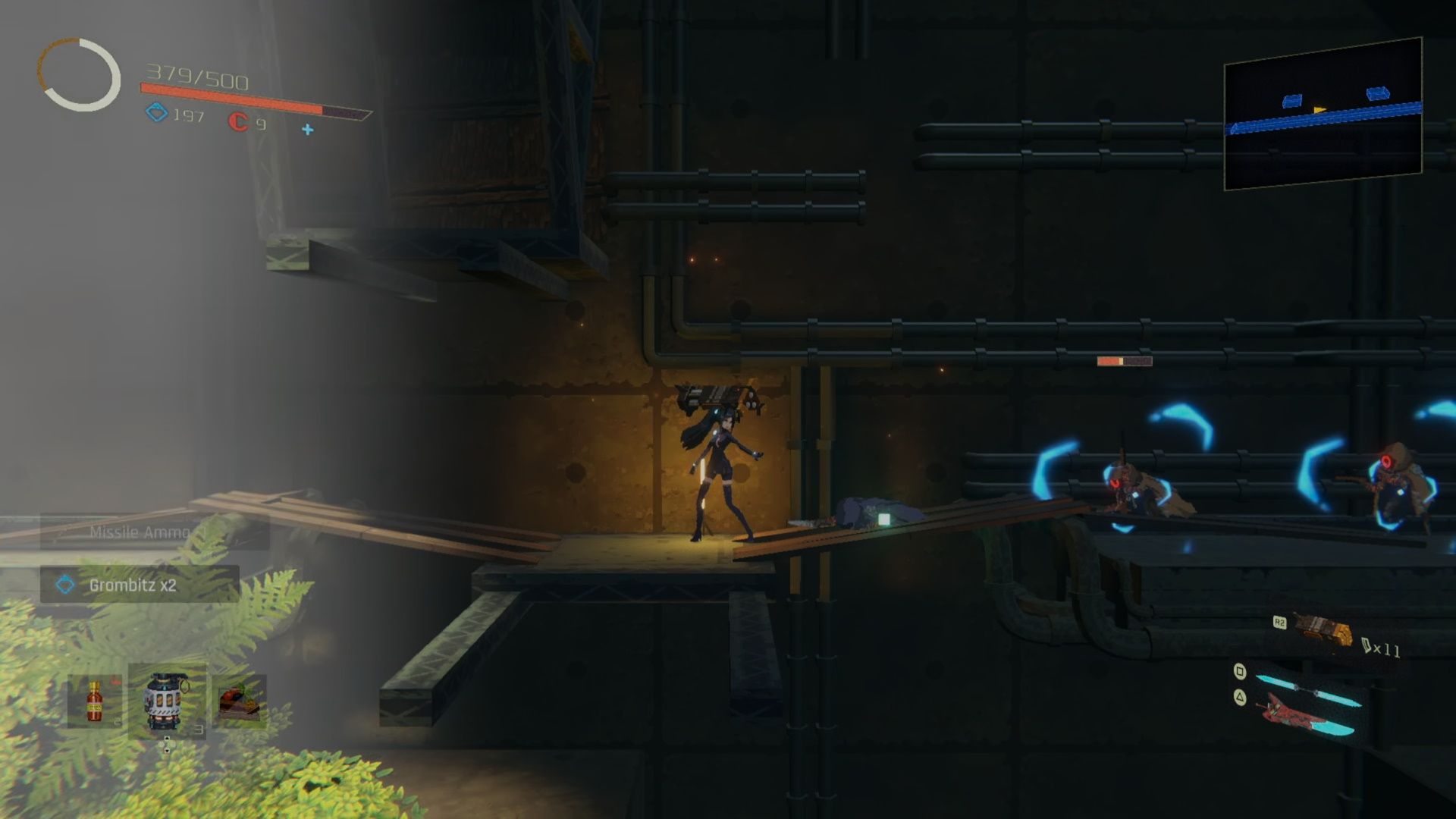 The rocket launcher locks onto multiple targets and fires a burst of rockets. It can take out multiple enemies at once and packs a bigger punch than your pistol. That being said, it also has the problem of forcing you to pause while it locks on. Also, you can't choose which enemies it locks on to. So, ultimately, it feels a little awkward to use, and it makes you vulnerable while you are using it. It just ends up feeling like a weapon that doesn't really serve much of a purpose outside a single boss battle. Though, of course, your mileage may vary.

With the rocket launcher, you are probably best using it when you have a number of flying enemies that you want to take care of quickly. Generally speaking, there are better weapons for dealing with large amounts of grounded units. So, fighting aerial units really feels like this gun's best usage. The fast-locking skill is the only talent tree ability directly associated with the rocket launcher. It reduces the lock-on speed, which makes it essential if you are planning to use this particular weapon.

The bladestaff isn't a separate weapon, but a form that is unlocked for the twin blades. However, it has a completely unique move set, so it deserves its own section. In a lot of ways, the bladestaff seems to fill a similar purpose to the light sword. It is relatively fast; however, some of its attacks do force an increased level of commitment. In some ways, it is a versatile weapon, but it also feels a little like you need to be more careful with it to get a similar result that you would get just using the twin blades or the light sword.

Theoretically, you could switch between the twin blades and the bladestaff, which would definitely add a ton of utility, but the command for switching between the two weapons is awkward to input with the analog stick (which is the only control option), and it has an unskippable animation associated with the weapons switch. So, this doesn't feel like a genuine, practical option.

The key element to remember with the bladestaff is that the third hit of the standard combo forces you into a prolonged animation. This means that you need to be pretty mindful of where you are in the combo. It should also be mentioned that the bladestaff also has its own version of the light sword's Shadowstep called "Naraka". This is a huge boon, but it is the final upgrade in the twin blade upgrade path, which means you are going to have to spend a lot of grombits to get it.

You can use the Air Blade attack to do some decent damage when you have an opening, but it will force you into a long animation and doesn't always hit for as much damage as you may expect. The Wind Blade charge attack hits at a long range, but it leaves an awkward dead zone directly in front of you while simultaneously locking you into a super long animation. It is probably the worst charge attack of all the base charge attacks in the game because of that.

Ultimately, you can absolutely make the bladestaff work, but it will cost a lot of grombits, and it is hard to understand why you wouldn't just stick to the light sword.

This ranged weapon packs one hell of a punch when it is fully charged and will hit every grounded enemy on the screen. Once you have upgraded your skills, it will be fast enough that you could eke out some usage of it. That being said, it is still a very slow weapon in a game that can be particularly punishing for slow weapons.

When there are a number of smaller enemies grouped up, and you can create some distance, this weapon can hit a great number at a time. Unfortunately, you get it very late in the game, so there are only a few instances that you could use it period. The Quick Recharge skill is the only ability directly associated with the Particle Cannon. It reduces the recharge speed, which makes it essential if you are planning to use the Particle Cannon.

The first ranged weapon acquired in the game is easily the best. It is very fast and only gets faster once you upgrade it. While it is the weakest of the bunch, it is extremely low commitment, so you can use it frequently. It also allows you to transition quickly from fighting enemies on the ground with a sword, to fighting enemies in the air with your pistol, to switching back to quickly switching back to enemies on the ground again. In ANNO, speed kills, which makes the pistol your go-to weapon for ranged combat.

You will probably use this for flying enemies, more often than not. The pistol allows you to reach enemies hovering will above the jumpable distance. You can also use it to get a little damage on grounded enemies who are at a great distance. The pistol has two talent tree upgrades associated with it: Max Magazine, and Auto-loading. Auto-loading makes your reload faster and Max Magazine increases the amount of ammo your pistol can hold. These are relatively cheap upgrades and are both worth investing in.

The greatsword's immediate weakness is pretty obvious in a game like ANNO: Mutationem: it is slow, and it forces you to commit to attacks to a degree that can make it a dangerous weapon to use during many of their game's encounters. If you had to choose between the greatsword and one of the faster weapon options, it would probably get less usage. However, that isn't a choice you need to make, as you will always have the greatsword available. Ultimately, this means that you will be able to use it frequently for spots of crowd control, or against some of the slower enemies, while still using a faster weapon for the bulk of encounters. The greatsword also plays a key role in reducing most bosses' shields.

Use the greatsword to quickly chip away at a boss's armor. You are going to want to keep it to single slashes. A single greatsword slash is still quite slow, but if you time it correctly, you will typically have just enough time to roll to safety. It can also play an important role in acting as a tool for crowd control. Lastly, the greatsword is the best melee weapon for fighting airborne enemies.

As for the unlockable skills, you don't need to drop a single grombit into the greatsword skill tree. The Empty Slash (which can launch enemies) can be a fun attack for people looking to add a little creativity to their game, but everything beyond that requires absurd levels of commitment that just don't feel viable. The base-level charge attack for the greatsword is already extraordinarily hard to use effectively, having a follow-up that keeps you locked into the animation longer isn't going to typically be helpful.

The light sword is your standard starting weapon, and it remains the most balanced of the bunch all the way to the end of the game. It is fast enough that you will never be overly committed while attacking while hitting harder than the twin blades. The greatest strength of the light sword is definitely the Shadowstep attack, which is a move that allows you to move through your enemy. This is, by far, the best skill you will unlock for any of the weapons. It is also cheap to unlock. It may not be as exciting as the other weapons in your inventory, but it feels like the whole game was balanced around it, which instantly gives it a huge advantage.

If you are using the light sword, you are going to use it as your primary damage dealer. What is great about the light sword is that you can use the full combo without worrying about stumbling into an attack that commits you to an attack animation for too long. Which means you will be able to roll frequently. However, instead of rolling, you should consider using the Shadowstep, as it will move you through your enemies while doing damage. That isn't to say that the roll will never have utility, it still has a lot of invincibility, but the Shadowstep attack should be your primary means for getting to your opponent's backside when you are anticipating a big attack.

When upgrading the light sword, you are going to want to immediately buy the Shadowstep. After that, whatever you pick up will just be for variety. The base version of the charge attack has pretty limited utility, which makes the supped-up versions extremely expensive for the minimal utility they give. Still, based on the Shadowstep skill alone, the light sword is a weapon that makes a strong argument for being one of the best.

In a game where you are locked into animations, and where you cannot cancel out of them with your roll, your quickest weapon is always going to be an excellent option. Your animations end fast enough that it always feels like you are able to react to an enemy's incoming attacks and roll away. This allows for unparalleled mobility. They may be your weakest melee weapon, but they hit so fast and furious that it feels largely academic. Their damage per second is still very respectable.