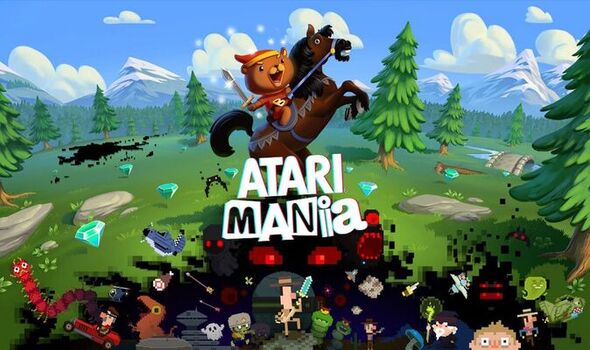 Atari Mania is kind of like a cross between WarioWare and NES Remix, featuring bite-sized stages made up of classic gaming properties from Atari’s past. What really helps set it apart, however, is that Atari Mania mixes multiple games together in one (much more so than NES Remix), creating a mashup of different gameplay styles and experiences. It’s precisely the kind of thing Atari should be doing, both as a way to celebrate its 50th anniversary, and to take advantage of its huge back catalogue of classic games.

If you’ve ever played a WarioWare game, then it shouldn’t take too long to figure things out.

You’ll play a series of short microgames one after the other, ending with a slightly longer boss battle that mixes things up even further.

In the first chapter, for example, you play a combination of games like Pong, Millipede and Swordquest.

In one instance, you may have to destroy the millipede while avoiding a game of Pong taking place at the same time. This could be followed by a second microgame where you’ll need to destroy the same millipede with the very Pong balls you were previously trying to avoid. You might even encounter a game where the aim is to protect the millipede by shooting inbound bugs with arrows.

The variety certainly keeps you on your toes, and there’s a real challenge that’s sure to please fans of old-school arcade action.

Sometimes, however, you won’t fail due to a lack of skill, but rather the loose controls and floaty movement. Some games don’t feel the way they did back in the 80s, which can detract from the experience.

Other microgames simply aren’t that much fun to play, or feel difficult in a way that’s cheap and frustrating.

On the plus side, the sheer number of microgames and mashups means you’ll want to keep playing, just to see what’s next. Racing against the clock to blow up that final space rock in Asteroids almost makes it all worthwhile.

Elsewhere, Atari Mania has some neat bonuses, such as hidden box art and game manuals, which can be found by exploring the museum setting. The museum sections also flesh out the story, all the while providing some rudimentary puzzle solving to break up the action.

Sadly, while it’s not a terrible way to provide some context, the exploratory sections feel just as slow and floaty as some of the mini-games.

If you’re a fan of Atari, and retro games in general, Atari Mania is the kind of experience that should set pulses racing.

Mashing together gameplay styles is a clever way of breathing new life into classic games, all the while giving long-time players the fan service they crave.

Unfortunately, however, while the concept is great, the overall execution lets it down.

It lacks the style and finesse of a WarioWare or NES Remix, both in terms of presentation and the way it handles. Primarily, the developers need to take a giant monkey wrench to those loose controls, which would really help tighten the experience up.

To its credit, I always wanted to see what mash-up would appear next, and the quick-fire nature of the microgames paired with the simple control scheme does lend Atari Mania an addictive quality.

Ultimately, however, Atari Mania is a fun but flawed game that just falls short of its enormous potential.