Platform brawler fans might not exactly love Brawlhalla, but it's a free-to-play game that offers that combat fix. Starting with six free characters, you can unlock additional fighters by earning coins at the ends of matches, and after completing daily missions. Alternatively, you can pay a one-time fee and unlock them all immediately.

Brawlhalla’s characters are drawn from various media properties, but not all fighters are born equal. To make the most of the game, it helps if you know who the absolute best characters are. 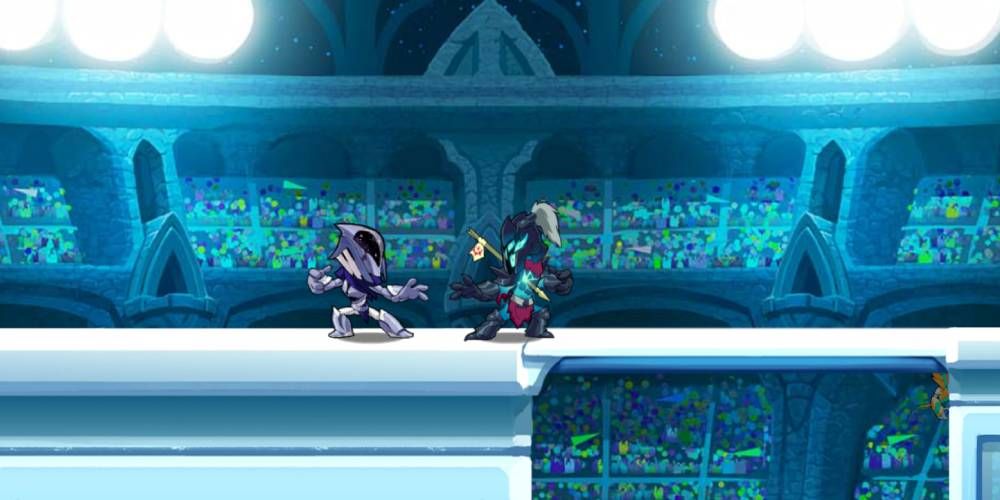 Evoking ghost knights from games like Castlevania, Magyar (Hungarian for “Hungarian”) is the surviving entity of 100 fearsome knights who were killed while fighting dragons.

Magyar might have a difficult time dealing with hit-and-run opponents, but he's the best tank in the game. He's a study character who offers the highest defense stats, and his weapon combination of Menace Maul and Soul Scourge can do a lot of damage. For those who are willing to patiently learn how to handle the character, Magyar can stand up to some of the strongest enemies in Brawlhalla. 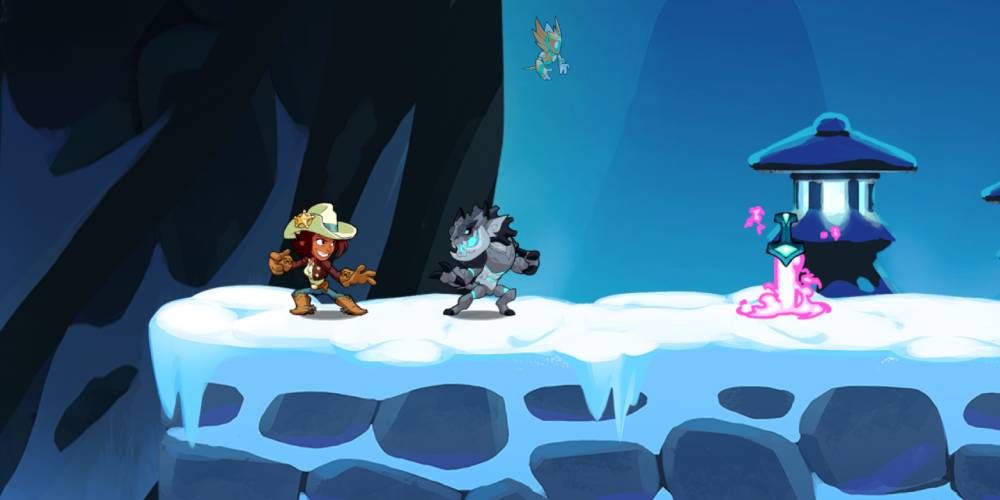 For many years, Onyx was the Guardian and Protector of Castle Batavia. Then, during the Siege of Lions, they decided to let the castle fall. While it might be hard to distinguish exactly what Onyx is supposed to be, the Brawlhalla files refer to it as gargoyle.

Onyx fights with a Cannon (Stryge) for short and medium-range attacks, and the Gauntlets (Brick and Mortar) for fast attacks. One of the most powerful characters in the game, Onyx’s strengths are her defenses, but she is weak to agility and speed. 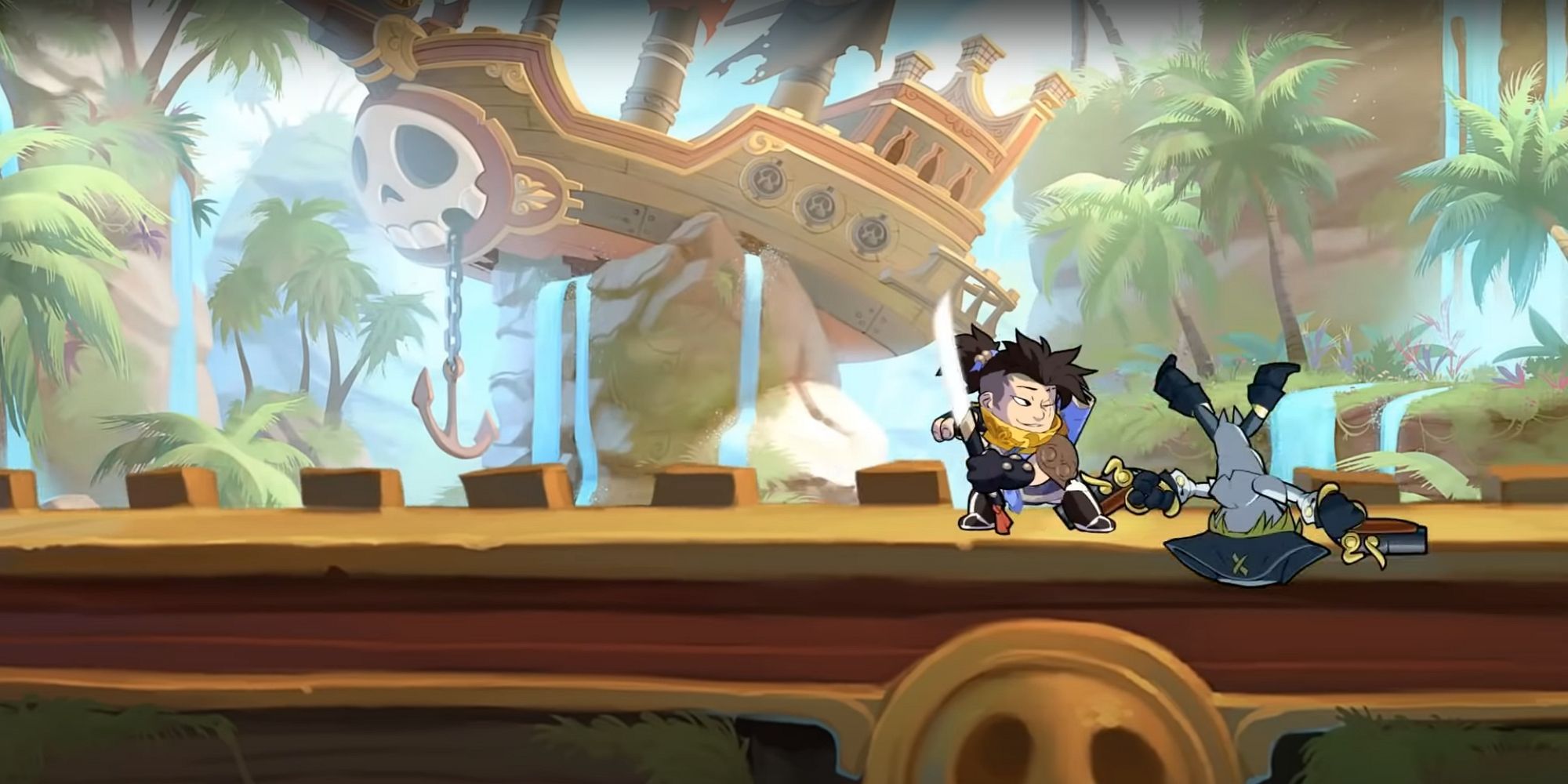 A soldier of fortune, Jaeyun once received three wishes after rescuing a unicorn-lion from the Goblin King. Jaeyun enjoys the battle of Valhalla, participates in side bets, and makes wagers on himself.

Jaeyun relies on the Cleaner (a sword) and the FInisher (a greatsword), and is both the first legend with a Korean name and the first to wield a greatsword. He offers high-impact combos, strength, speed, and dexterity. He is one of the most balanced characters in the game, which means he’s one of the easiest legends to learn. Beginners would do well to start off with Jaeuyn. 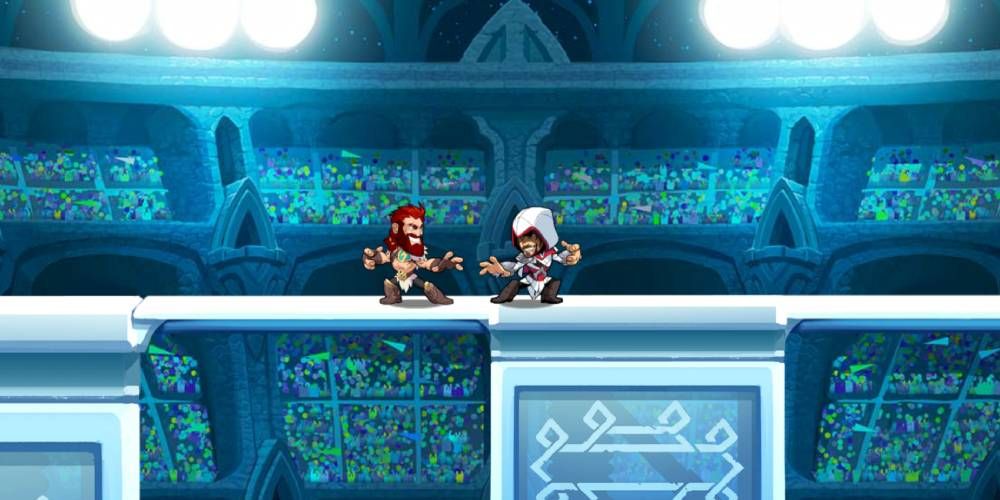 One of the newest characters, Ezio is best known from the Assassin's Creed series. After a lifetime of fighting evil, he is surprised that Valhalla is real and decides to participate in Brawlhalla. He is costly to acquire, but a skilled fighter.

Ezio fights with an Auditore Blade Sword (sword) and Apple of Eden (orb). The sword can deliver a great amount of damage, and countering him is not easy for opponents. While he might be new to the series, Ezio is one of the deadliest characters in the game.

Mako looks like he was a character in the 1990s action-figure line Street Sharks, only part shark and part bear. As the daughter of Poseidon, Mako led the attack on Atlantis, which led to the city being covered in water. She then became the Queen of Atlantis.

The primary advantage of Mako is her aggressiveness. She offers powerful signature moves that let her do big damage when least anticipated, and does especially well in 2v2 and other versions of Brawlhalla that feature numerous characters. Mako is also a good fit when she is equipped with a greatsword. If you want to outsmart and outshine your opponent, Mako is a good pick. 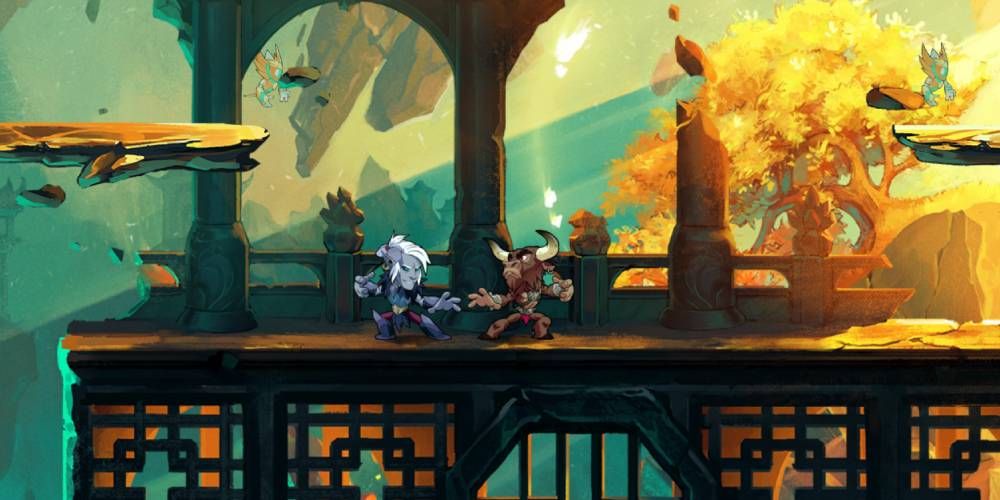 The lone survivor of a voyage to Peril Mountain searching for a dragon’s chamber, Teros the Minotaur has been a street urchin, a stone carrier, a debt collector, and a gladiator. He is not interested in the tournament aspect of Brawlhalla, but instead just loves to fight.

Teros is the first fighter in the game to wield an axe, and might just be the best. Even though it’s slow, the axe is a menacing weapon that offers fantastic knockbacks and high damage. His hammer also provides high damage and knockbacks, despite not allowing for flowing attacks. You'll discover that Teros’ attacks are easy to spam, which means that he’s a great fit if you’re new to Brawlhalla. 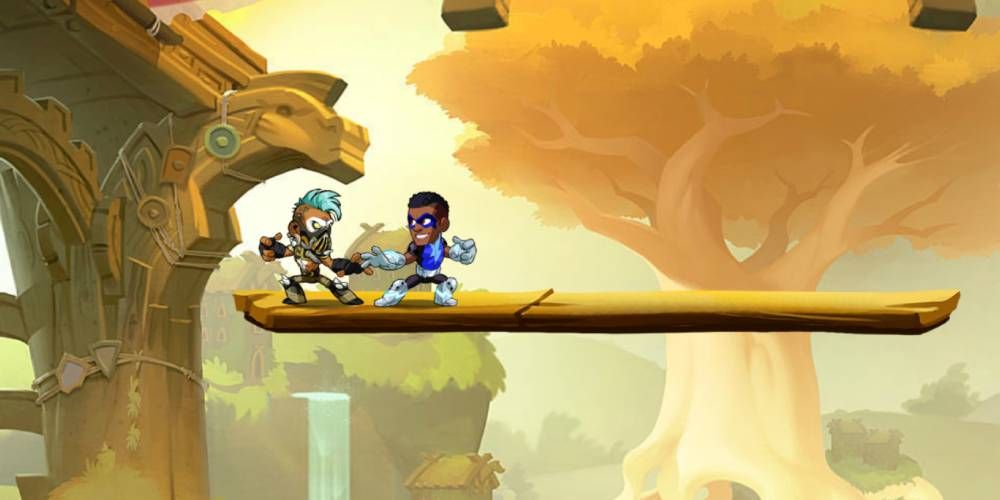 Physicist, athlete, and talk show host, Henry Coates takes has a secret identity — Sentinel, the greatest superhero in the world. Armed with weapons he created himself, he fought a secret group called KABAL for years. Sentinel now focuses on defending people in Asgard.

Sentinel comes equipped with a grapple hammer and Katars (knives). While the hammer doesn't work for flow attacks, it’s a great weapon to punish enemies through heavy damage and knockbacks, and it can also be used to grapple. Sentinel can use the knives for quick attacks, and even though he has neither the best dexterity nor strength, he boasts high defense and better-than-usual agility. 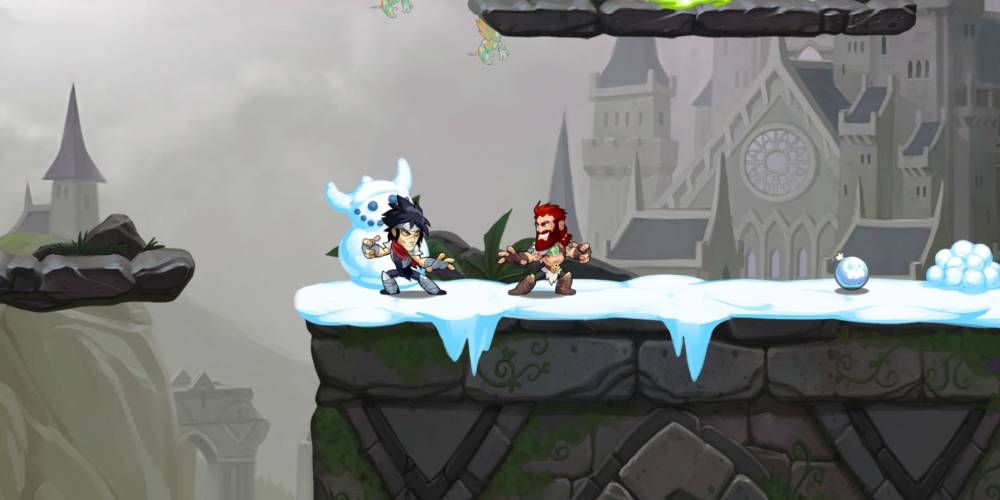 The God of Lightning and Fertility, Thor created the word "Brawlhalla". When he's not defeating giants or world-circling serpents, he enjoys fighting in tournaments.

Thor fights with the Mjölnir (hammer) and Eye of the Storm (orb). While he offers decent speed, his strengths are defense, strength, and dexterity. He can grab enemies with his hammer in order to pull them closer, and is another great tank-like character. 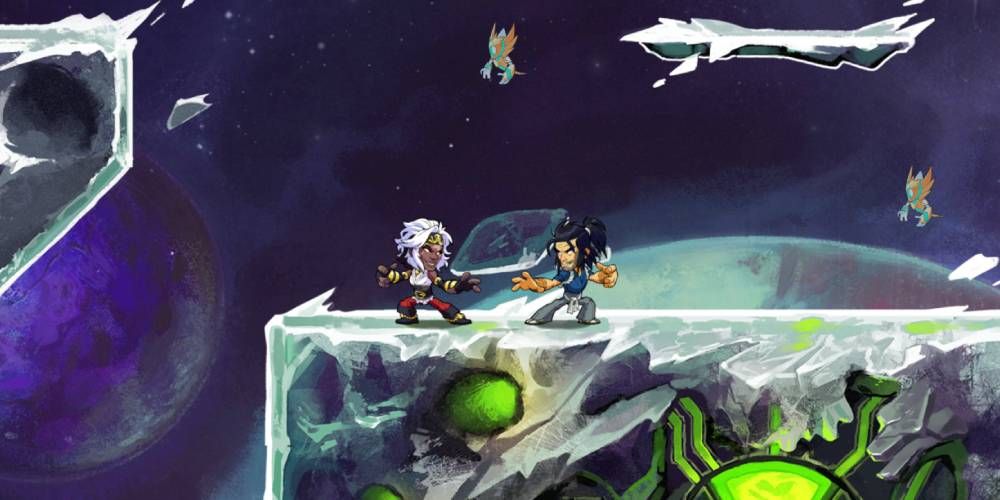 Koji is a character influenced by the ronin figure in Japanese lore. After his father and dojo students were slaughtered, Koji had to go into hiding. Years later, he cut down the shogun who murdered his father, then began to fight the shogun's 3,000 guards on his path to Valhalla.

Koji uses Yum (a bow) and Ancestral Blade (sword), and his biggest asset is his speed. If you like to move around a lot and can avoid hits, he's a great option — if not one of the best in the entire game. 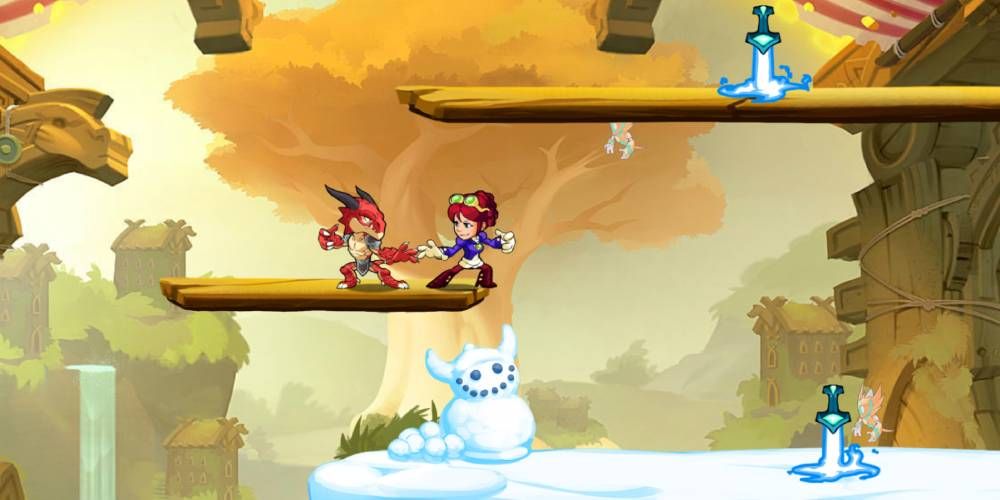 The creator of several inventions, including a steam dirigible, Scarlet is also a boxer and Royal Society member. On an Andex expedition, she was betrayed by Baron VonEvilStein, had her inventions stolen, and was framed for murder. She then fought the Baron in an air battle that circled the world twice.

Scarlet’s primary weapons are the Pneumatic Hammer and Aetheric Rocket Drill (rocket lance). Her hammer will serve up heavy damage and knockbacks, and is useful for grappling, while her rocket lance can be used for sharp attacks at mid-range. Scarlet is especially strong without spectacular dexterity or defense, but is most effective in unarmed combat. What makes her so great is that she's not reliant on her signature moves, which can be used sparingly.