In Bugsnax, there are four Bugsnax whose existence is hidden from you at first. They're legendary, almost mythological beings that the residents of Snaxburg can only dream of meeting. Luckily, they have you to make those dreams come true.

Daddy Cakelegs is one such Bugsnak, and it's a gigantic, angry birthday cake. It calls Frosted Peak its frostbite-inducing home and it's fought very late in the game as part of Snorpy's personal storyline. It's a pretty hectic battle of attrition that'll take you all over the area, so let us guide you through the ins and outs of the encounter.

How To Find Daddy Cakelegs 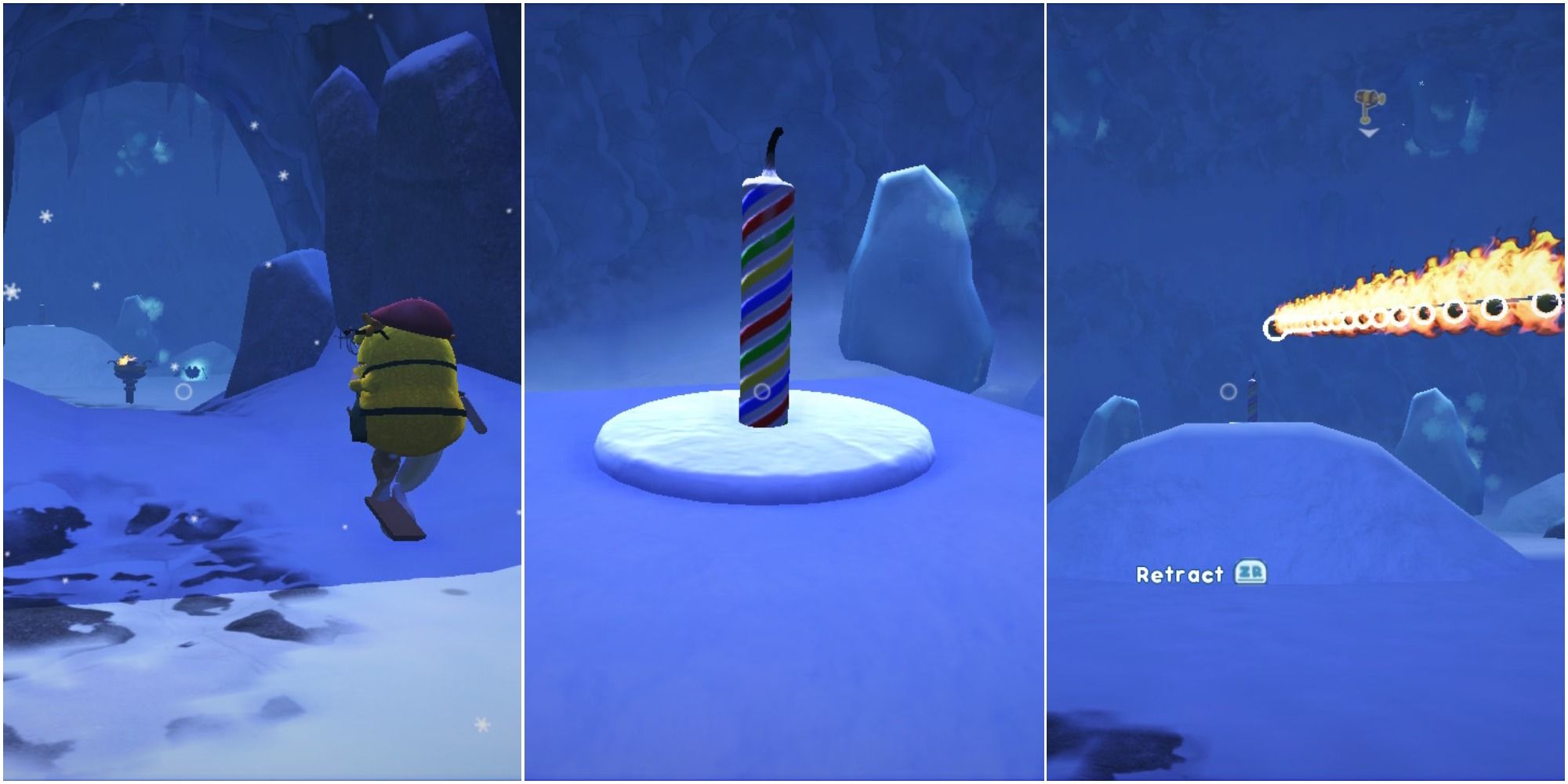 You'll have to fight Daddy Cakelegs if you want to complete Snorpy's personal questline, and it's also the only way to face him. These quests deal with Snorpy's ever-present anxieties and conspiracy theories regarding the mysterious Grumpinati, a secret society that Snorpy swears is spying on him. Regardless of whether it's true or not, there are two quests you need to finish before taking on Daddy:

In addition to completing these quests, you will also have to finish the Eggabell Keeps Her Cool series of quests. This is because no other quests can take place at Frosted Peak until it's over as Eggabell won't let anyone else come up the mountain. You'll handle this as part of the main story.

With all that said and done, you can get the Cake Boss quest from Snorpy, head to Frosted Peak, and enter the lowermost cavern to find an odd candle on top of a mound of snow. This is Daddy Cakelegs.

How To Defeat Daddy Cakelegs 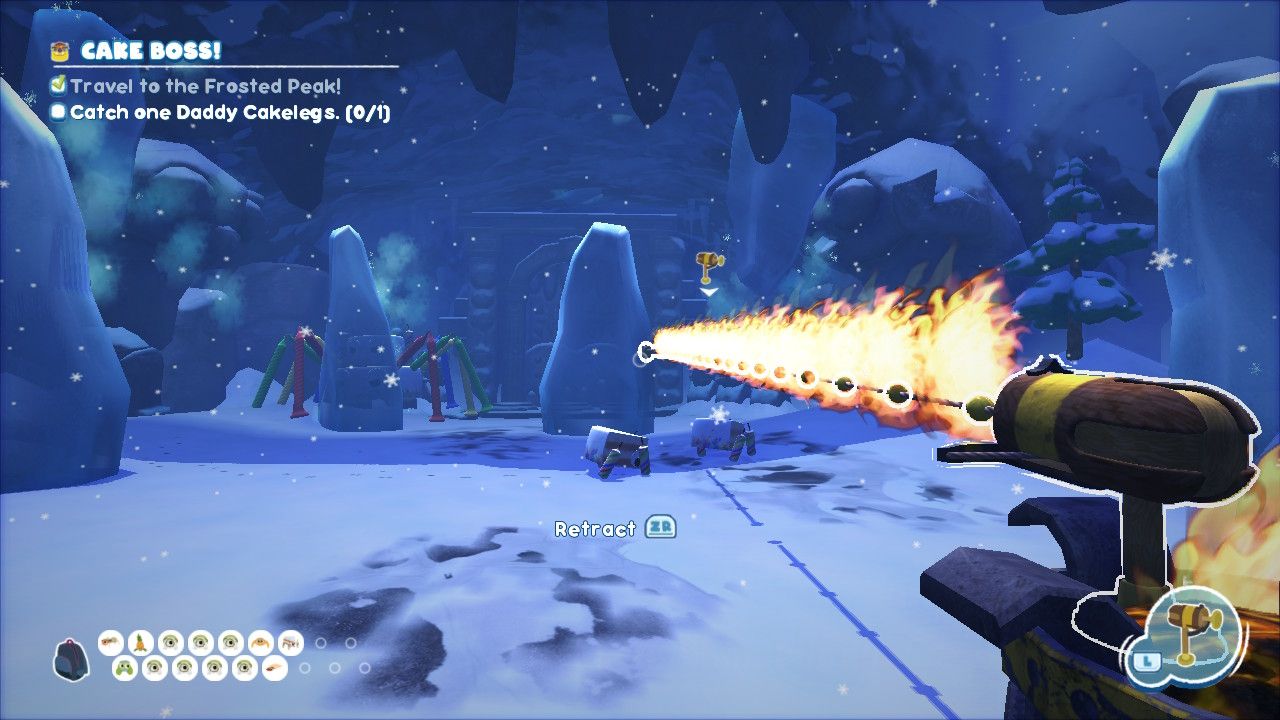 To start the fight, you'll need to place your Trip Shot on the nearby brazier and aim it at the candle in the center of the cavern. It'll light, enraging Daddy Cakelegs.

Daddy Cakelegs will attack every now and then, and this will cause some horrific screen shaking. Consider turning Screen Shake down or off in the Settings menu.

The key to damaging Daddy Cakelegs is to use a lit Trip Shot wire to light the two candles it has on either side of its body. As the fight progresses, the snak will move around the arena erratically, summoning large slabs of ice from the ground. With your Trip Shot on the brazier and lit, aim it at the slabs in a way that means the snak will walk into it, lighting one of the candles.

Since your Trip Shot is on fire, attaching them to the ice slabs will cause them to melt slowly. Don't worry, though, as Daddy Cakelegs will summon more as the fight progresses.

You'll have to light both candles separately, meaning you need Daddy Cakelegs to walk into your flaming Trip Shot wire from the left and the right. 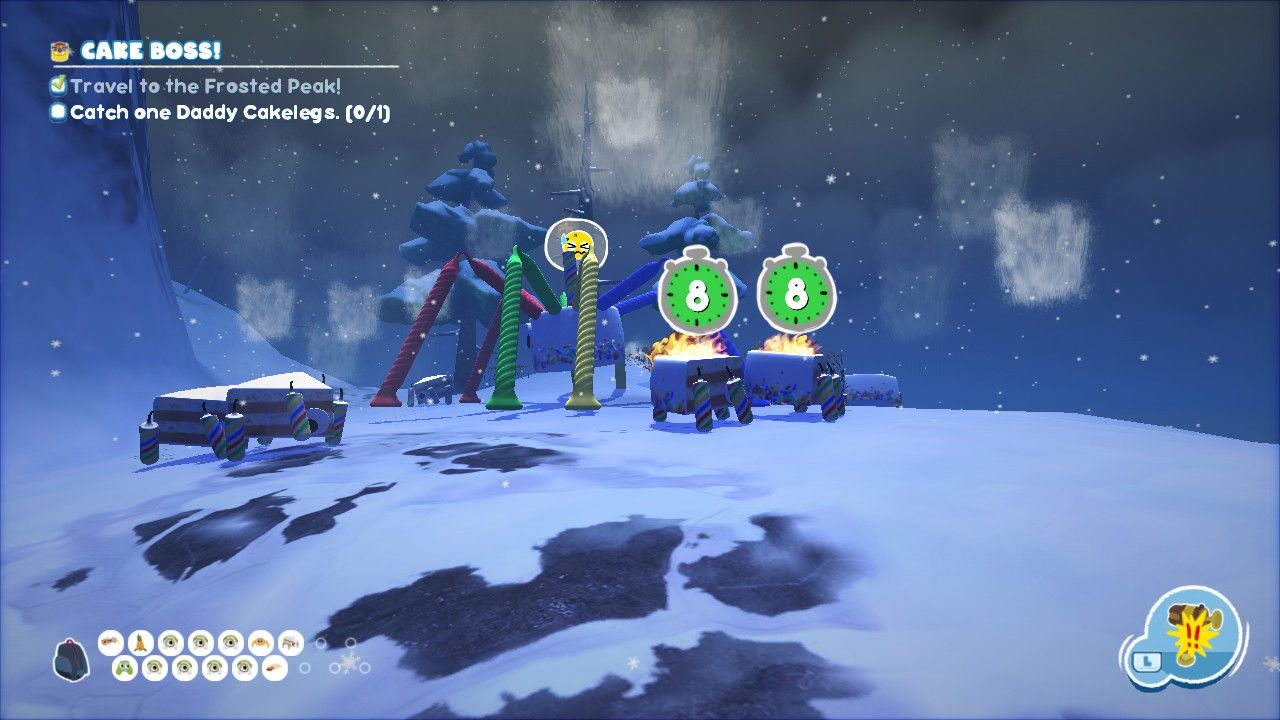 Once you've lit both candles, Daddy Cakelegs will flee, leaving behind some Baby Cakelegs. These small Bugsnax will trail out of the cavern and head to the place Daddy Cakelegs has gone.

Baby Cakelegs are easy to catch, just place your Snak Trap down in front of them.

Daddy Cakelegs has moved to the temple at the bottom of Frosted Peak – the place that Eggabell now calls home. This part of the fight is basically the same as the first part – light the conspicuous candle and then use your Trip Shot to set fire to both candles on the overgrown birthday cake. Once that's done, Daddy Cakelegs will move to a third and final location.

You'll find the fatherly pastry on the opposite side of the Frosted Peak, near the campfire you can find by heading to the right from the area's entrance. Activate the fight again with the help of some flaming Trip Shot action.

In this final phase, Daddy Cakelegs will scuttle around the cliff face, and now your aim is to light the big candle on the top of his head. Again, the ice slabs will melt when you shoot the Trip Wire at them, but they'll reappear after a short while when the boss resummons them.

Once you've lit the final candle, Daddy Cakelegs will give up. As if all his frosting has melted, he'll collapse to the ground a far smaller dessert than he used to be. Scoop him up with the Bug Net and feed him to Snorpy to finish the quest.

How To Refight Daddy Cakelegs 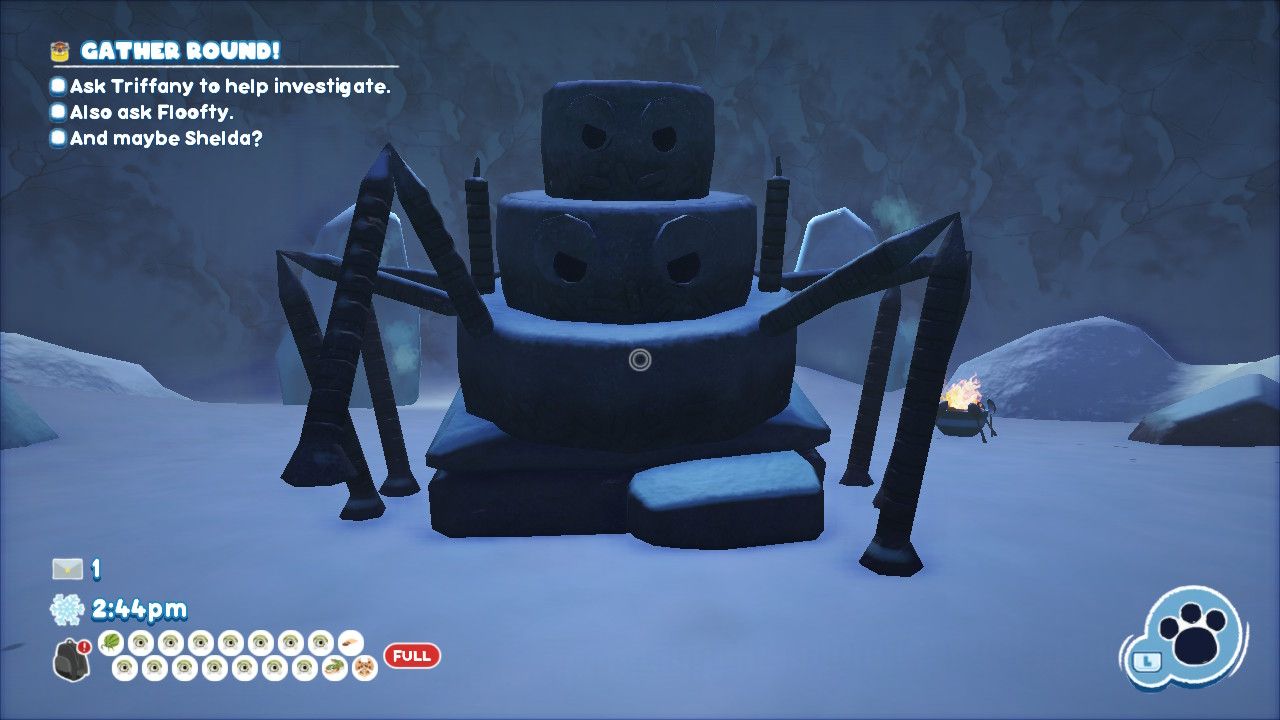 After beating Daddy Cakelegs for the first time, a new statue of the humongous dessert will be erected in the bottommost cavern. You can interact with this to relive the fight and capture more Daddy Cakelegs – something you'll have to do if you want to get all the furniture in the game!