The Isle of Bigsnax update that came to Bugsnax added a ton of new content to the game – all for free! One of these new features is the eponymous Broken Tooth Island, a new landmass that appears off the coast of Snaktooth Island.

Broken Tooth comprises a new area to explore with lots of new Bugsnax to nab, all of them supersized. The grandaddy of them all, however, is the Cheddaboardle Rex – a veritable king of cheese. The fight against this monster is the climax to the update's new storyline, and here's how to go about beating it.

How To Find Cheddaboardle Rex 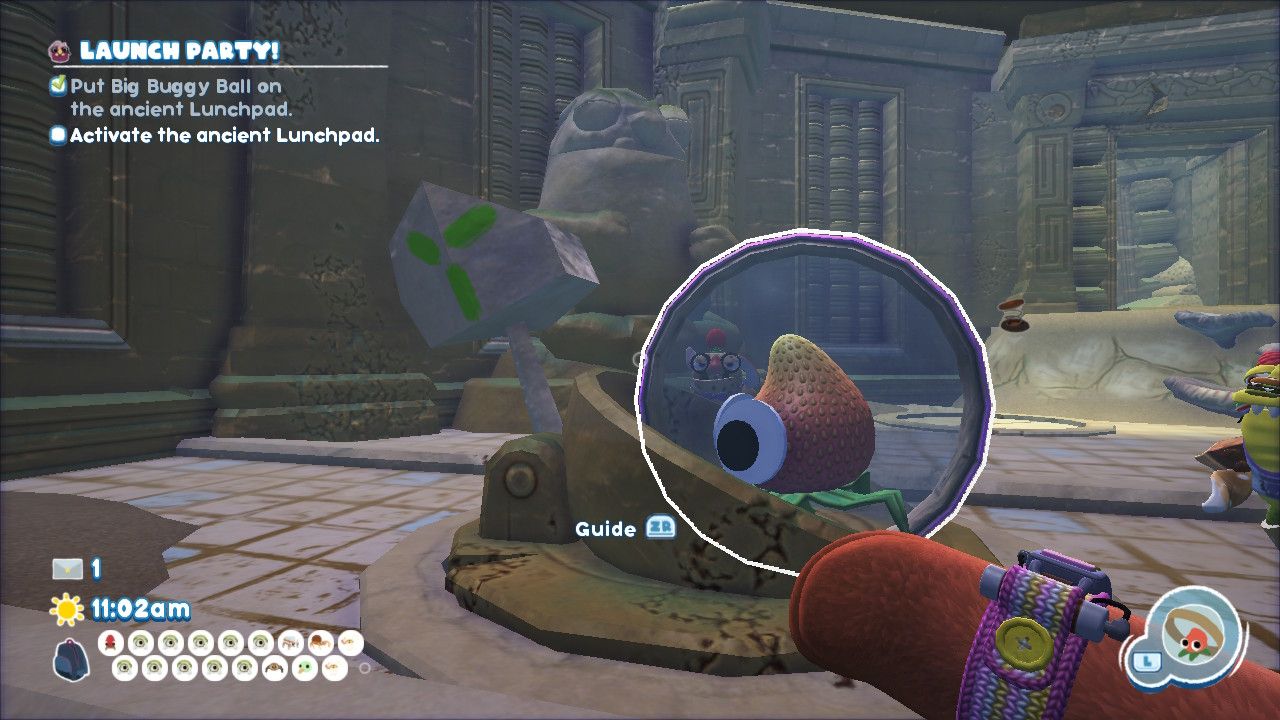 The prerequisites for fighting Cheddaboardle Rex are quite simple. You just have to complete the quests given to you by Chandlo, Floofty, Shelda, and Triffany on Broken Tooth Island.

Once all of the quests are complete and the Grumpuses have learned to get along (a little bit, at least), it's time to work together to enter the temple in the center of the area.

The Grumpuses will reveal their new invention, which is just a supersized Strabby for your Buggy Ball. Use this to break the rock that once gave Triffany so much bother, and you can enter the suspiciously arena-like inner sanctum. Follow the quest objectives until you're prompted to put your Buggy Ball into the launcher on the right-hand side of the arena. Using your Snakgrappler to launch the Buggy Ball will begin the encounter.

How To Defeat Cheddaboardle Rex 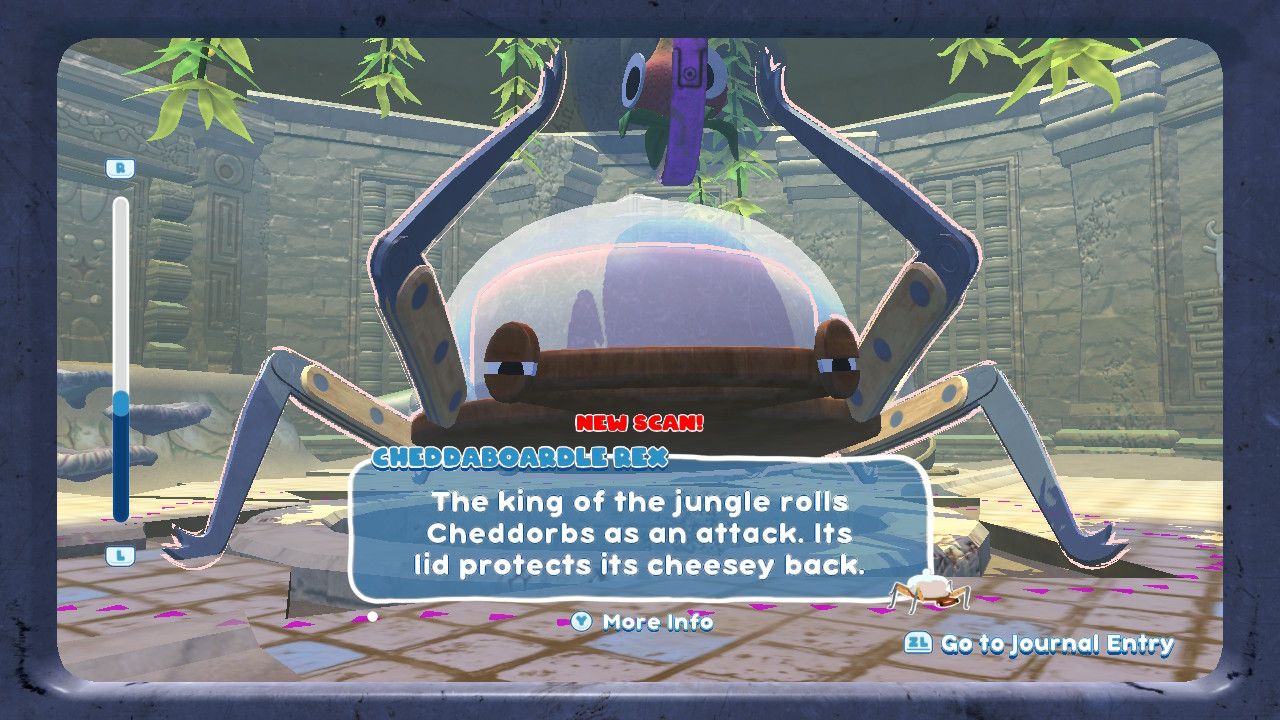 Of all the legendary Bugsnax in the game, the fight against Cheddaboardle Rex is the most involved by far. Straight away, you'll be joined by three Cheddorbs in the arena who will make things very frustrating for you, as they'll roll into you and block certain mechanics, delaying the fight.

The fight is broken down into five short phases.

At the start of the fight, there will be two stationary, large Lunchpads at either end of the arena – the same as the one you used to begin the fight. 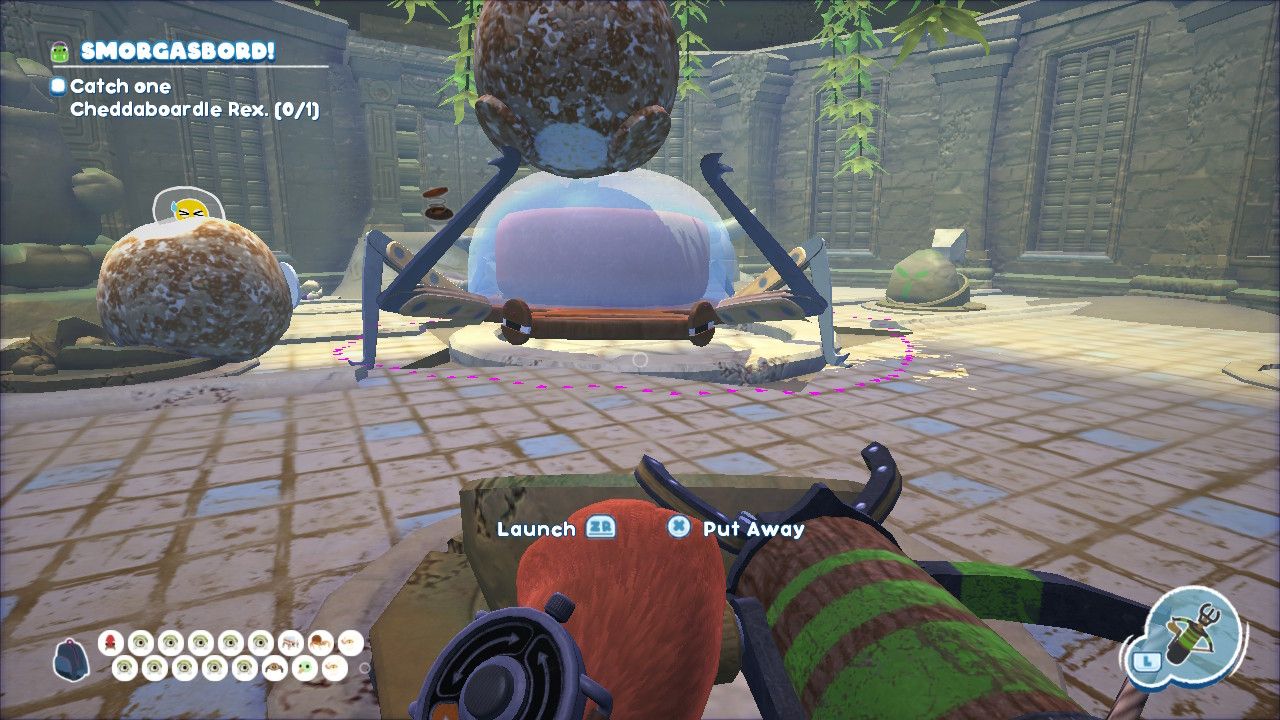 The Cheddaboardle will attack you by picking up a Cheddorb and launching it at you. In this phase, you must stand behind one of the Lunchpads so that the Cheddorb slots into it. Once it has, use the Snakgrappler to launch the Cheddorb at the boss. Do this twice and you'll proceed to the next phase.

Whenever you use a mechanic to damage the Cheddaboardle, it will get destroyed in the aftermath. You can't use the same Lunchpad twice, for example.

This phase begins with two piles of rocks that surround Lunchpads rising up from the ground. You won't be able to use them to launch Cheddorbs back at the boss yet – you need to free them from their rocky prisons.

To do this, grab some Shrink Spice from the altar at the side of the arena. Shrink down a Cheddorb and it'll find its way into one of the rocky mounds, destroying it. Now you can use those Lunchpads when they get filled with Cheddorbs.

Now, all you need to do is repeat the same moves from the first phase, launching Cheddorbs at the Cheddaboardle.

With no more Lunchpads to use, two vertical slots will be revealed at either end of the arena. 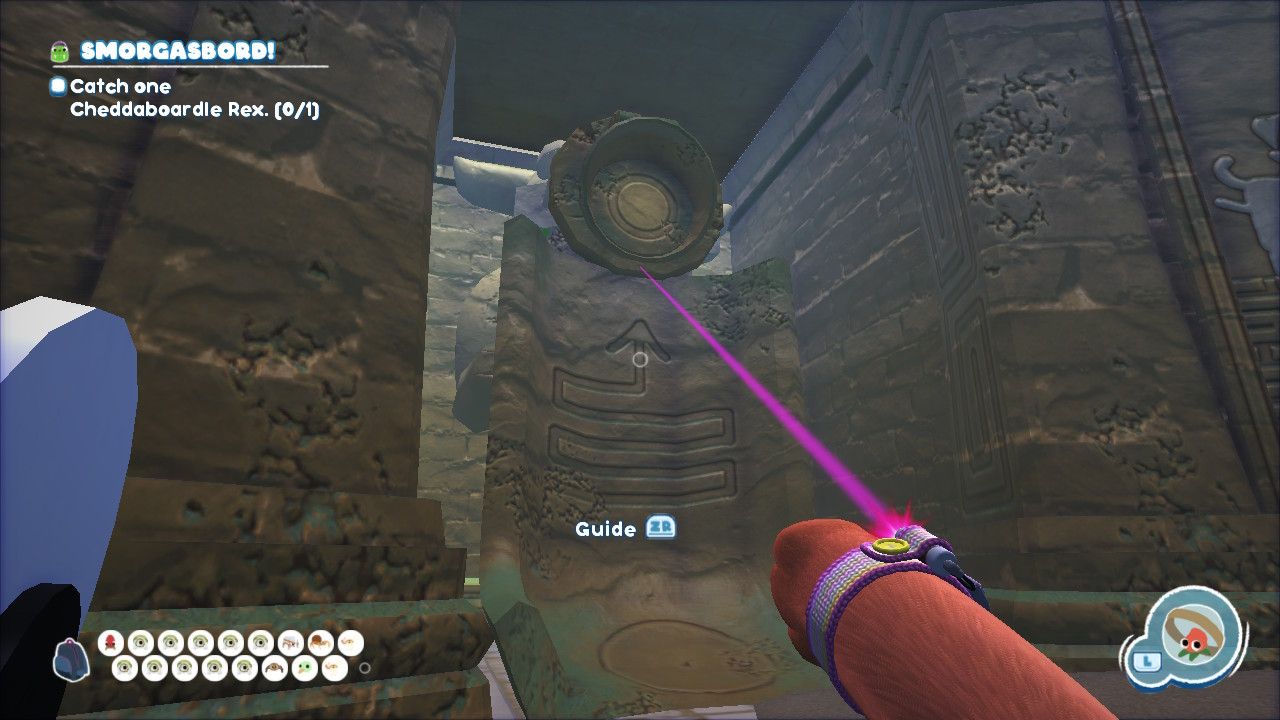 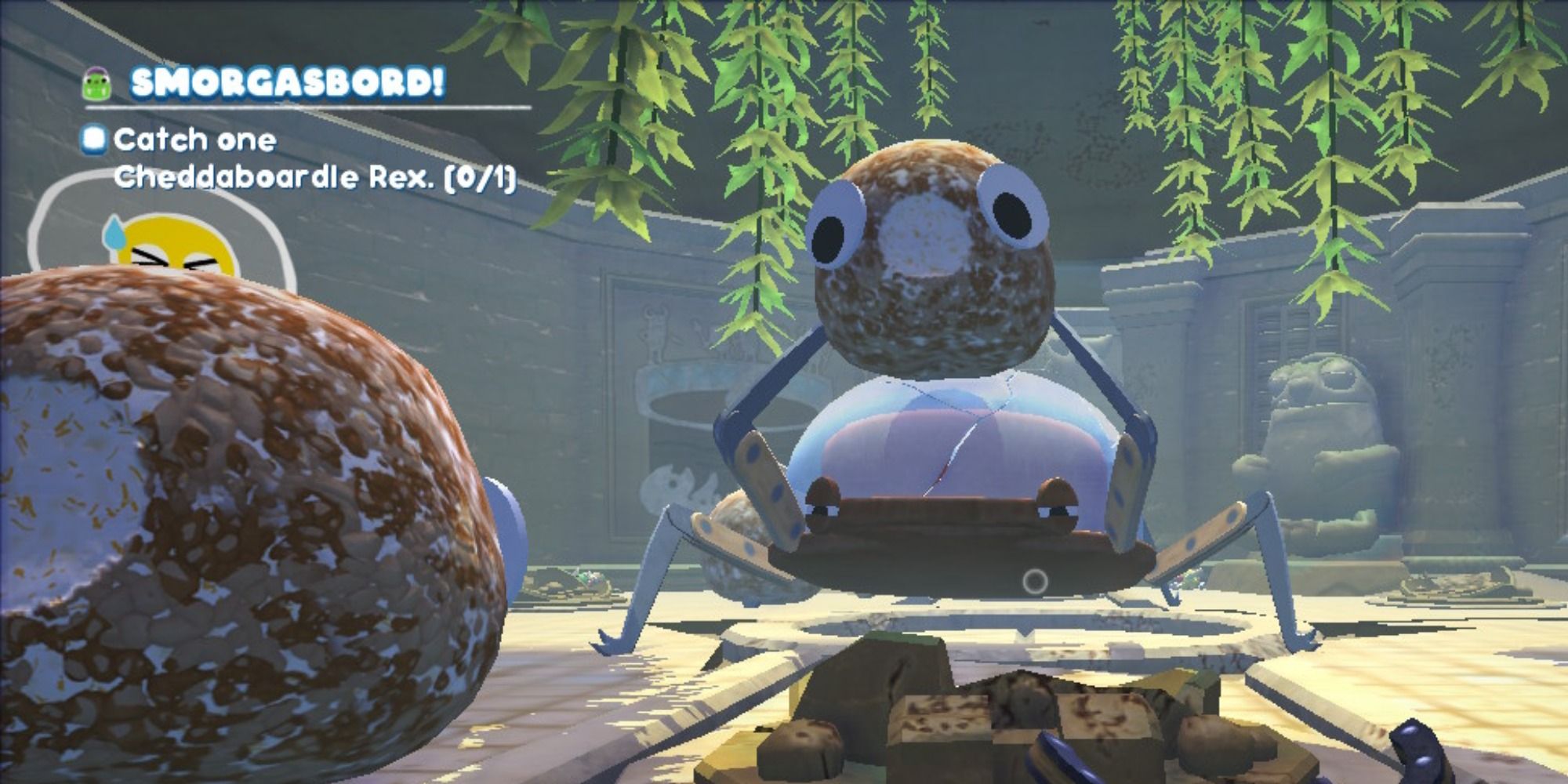 In this phase, you need to bait the Cheddaboardle to launch Cheddorbs at you in the direction of the slots on the walls. Once the Cheddorb is rolling towards you, get out of the way. It'll roll up the wall and get stuck in the slot, with an apparatus on the side that can be grappled to retaliate against the overgrown cheese board. Do this twice.

In this phase, you get your Buggy Ball back and a large maze in the wall will be revealed. This is just a larger version of the mazes you solved with Shelda earlier on the island.

Get Buggy through the maze. You can safely ignore the Cheddaboardle now – the Cheddorbs are gone and it can do no more than throw some rocks at you. You can't die or otherwise fail.

Once you've got Buggy through the maze, it'll get launched at the boss and shatter the cloche.

This final phase is easy. There are just three steps to take: 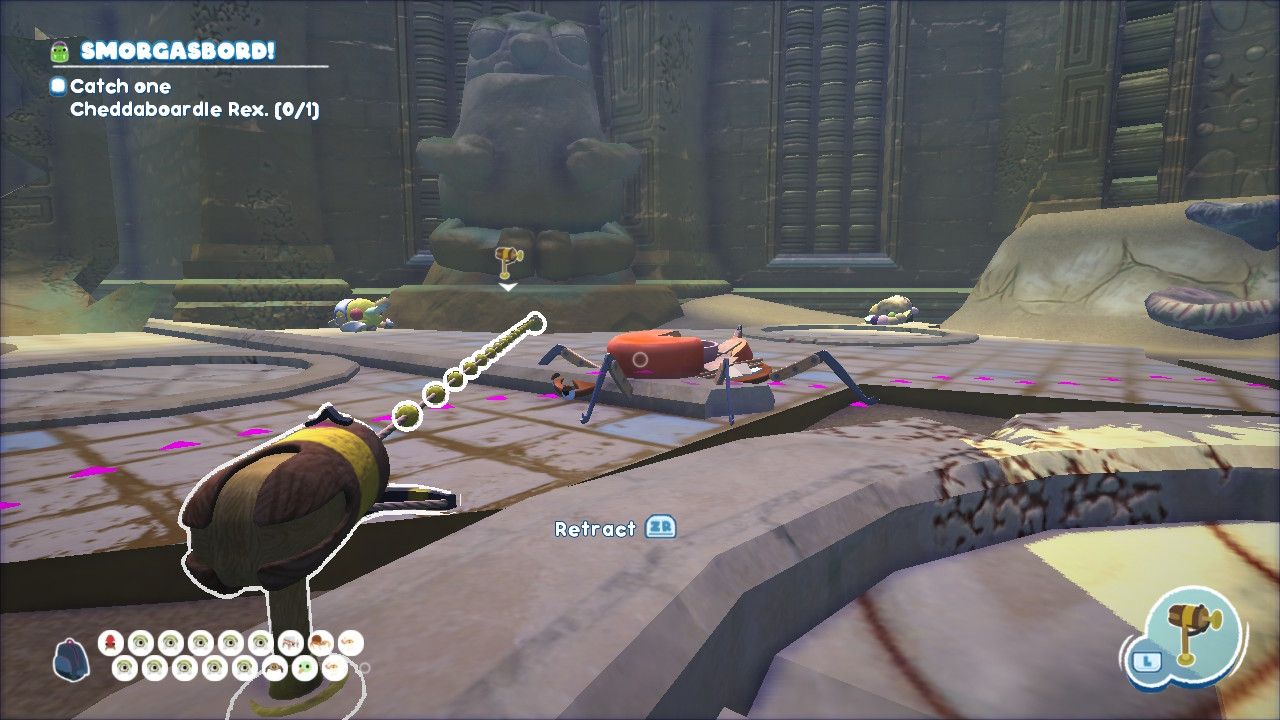 With that, the fight is over and you have almost completed the update's storyline. Feed the bested Bugsnax to Chandlo and you can head home.

How To Refight Cheddaboardle Rex 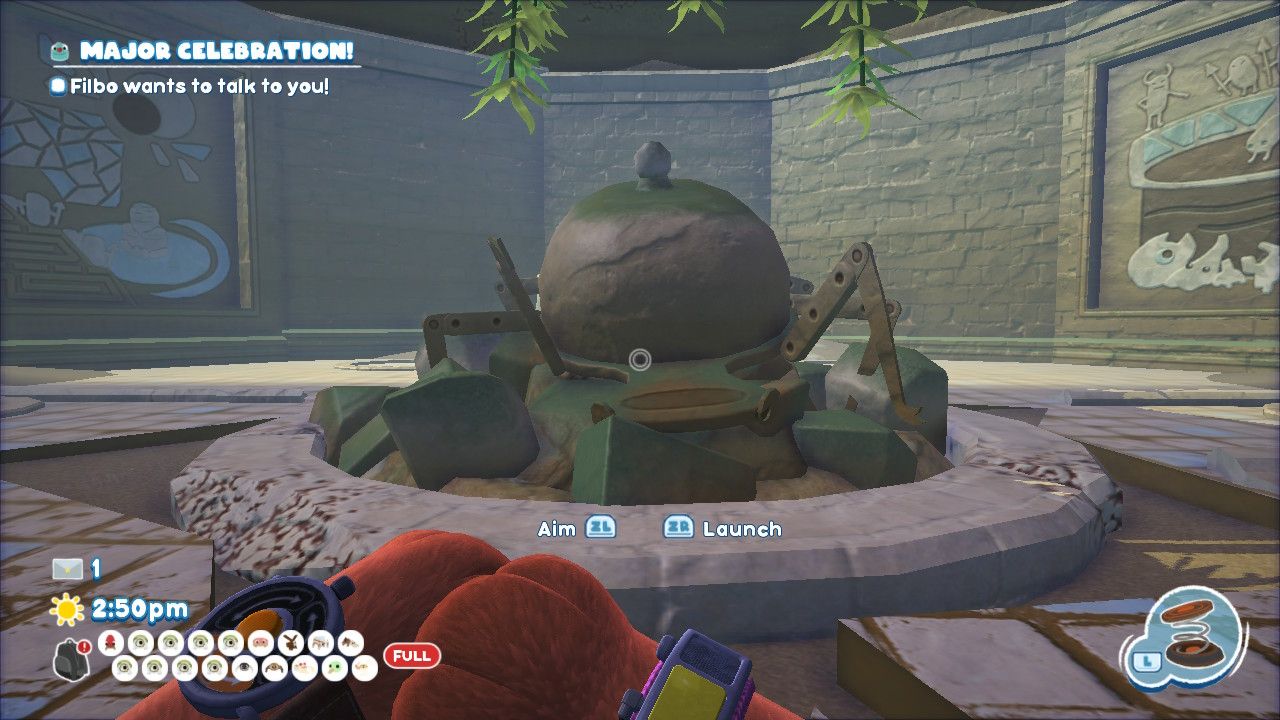 If you come back to Broken Tooth after completing the quest, there will be a statue surrounded by rubble inside the temple's sanctum. Like the other Legendary Bugsnax, this statue allows you to refight the boss, for whatever reason.