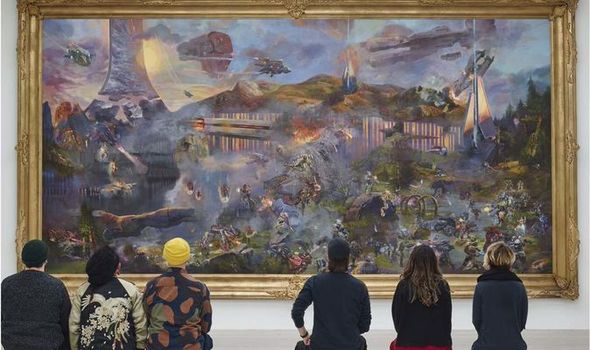 The painting was crafted by award-winning artist Iva Troj, with the three metre by six metre canvas portraying Master Chief, locked in battle against a horde of alien enemies, and inspiring allies around him. For fans who have followed Master Chief’s adventures over the past two decades, the painting on display at the Saatchi Gallery will be unlike anything they’ve ever seen before. The painting combines pop culture iconography and classic Renaissance artistic style to create something wholly unique.

If you’d like to see the Halo painting up close and personal, then it is on display at London’s Saatchi Gallery until December 15, and you can view the artwork for free.

A smaller replica will also be on display at the world-renowned Carrousel du Louvre in Paris until December 19.

Speaking about her creation, Troj – who was named Contemporary Art Excellence Artist of the Year in 2016 – said: “I was challenged to create a work in my own style, which typically has a dreamlike and sometimes fantastical quality, but ensuring that it’s instantly recognisable as Halo.

“I consequently spent a long time immersing myself in Halo’s universe to bring this to life in the manner of an old master but depicting a modern battle, and I hope Halo fans and gamers everywhere enjoy the results – including those smaller Easter eggs that you might not notice at first glance. A rare combination of digital and traditional painting skills was required, as I worked alongside the 343 Industries development team; the painting was completed in just over a month.”

You can watch a video that celebrates the unveiling of Troj’s painting in this article.

An eye-catching projection was beamed onto the Microsoft Experience Centre facade which showed a Warthog being air-lifted to the ground in front of the iconic Halo ring.

You can watch a video of this eye-catching Halo celebration right here. Customers that attended the flagship Microsoft shop in London were also able to get into a full-scale replica of the iconic Halo jeep.

“We’re so excited to get this game in the hands of our players – both those that have been with us since the beginning as well as newer gamers – all ready to jump into an epic sci-fi universe and experience our most adventure-filled Halo game yet.”

While James Butcher, head of Xbox UK & Ireland, added: “Xbox and Halo both turned 20 last month and I can’t think of a better way to celebrate that than with such unique activities, giving our fans and the public a chance to see something special.”

The Halo Infinite campaign launched on Wednesday December 8, a month after the free-to-play multiplayer element released.

Halo Infinite is available as part of Xbox Game Pass, or can be purchased for £54.99.