I love a bit of stealth. Nothing beats stalking through the shadows of a criminal-infested dockyard, choking out fools and disabling cameras as I creep toward my goal. Knowing I have the option to pull out a katana and slice my foes to ribbons if it all goes wrong is a welcome relief too, and a balancing act that the finest RPGs have achieved for years.

Cyberpunk 2077 manages this too, but its approach to stealth is largely rudimentary and not nearly rewarding enough to view as a primary means of navigating Night City. I’m a sneaky gamer, so I will enter larger levels and gigs with an intention of downing my adversaries with careful silence instead of kicking up a fuss, but a lack of meaningful tools at my disposal and a stale feeling of repetition meant I seldom felt entertained. The whole thing is underbaked.

Ahead of release, I saw extended presentations of Cyberpunk 2077 at E3 and Gamescom, watching as a virtual slice of 40+ minutes of gameplay was showcased with ample precision. While these sections of the game would be present in the final product, they promised features and enhanced gameplay systems that would be radically scaled down upon release. V’s backstory was far more detailed, while the skill system teased an unrivalled level of customisation that made multiple playstyles possible in ways that made it seem like, depending on the character you were, the whole game would be capable of changing. That was either a lie, or a promise far too lofty for its own good. 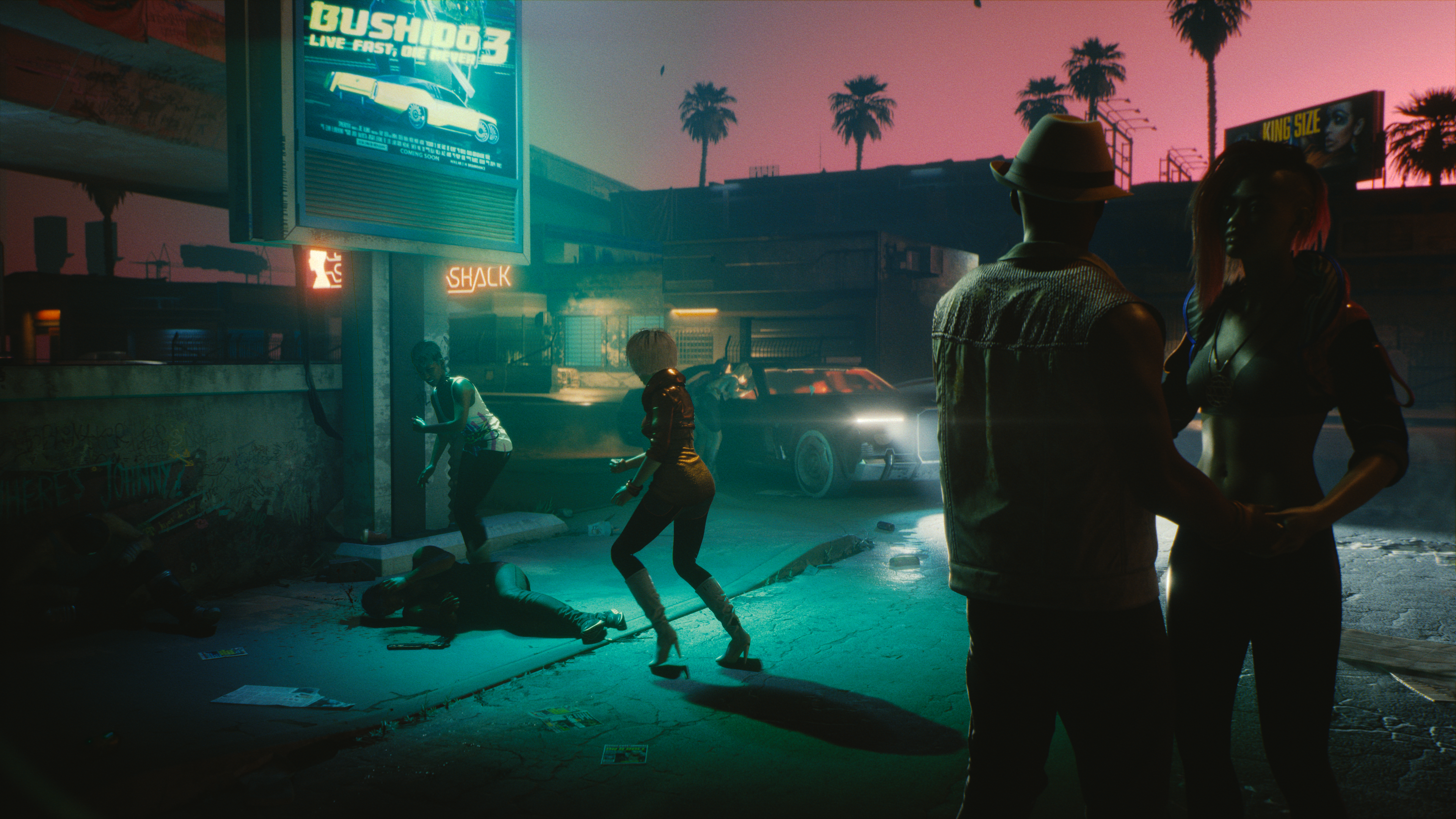 Pacifica was the focus of one demo, particularly your first meeting with Placide and the Voodoo Boys before infiltrating the Grand Imperial Mall. Many dialogue options and narrative decisions remain the same, but the illusion of depth presented to me all those years ago was a falsehood, and there are only a couple of outcomes that had any real impact on anything. I’ll save a more comprehensive breakdown for another article, since right now I want to focus on a single aspect – how the heart and soul of Cyberpunk’s stealth was ripped apart before my eyes.

In the finished game as it is now, V can stealth kill enemies or knock them out, repeating the same animation over and over as we learn the routine of patrolling gang members and move in for the kill. The routine is predictable, and Cyberpunk 2077’s level design never pushes the boat out enough for me to bother changing up my tactics. You wait until they’re away from any nearby cameras or allies before taking them down. Hiding bodies is pointless too, because unless you distract someone there is zero chance they will stumble across their dozing comrades. The pattern becomes predictable, and it shouldn’t be so boring. V has loads of hacking abilities too, but few of them are explained and the only ones I ever used were to disable cameras or distract foes with nearby vending machines. Those you go up against are both too dumb to waste more complicated techniques on, and go down after a handful of bullets or stealth attack anyway, so it’s so much easier to take the easy way out when the game doesn’t provide nearly enough avenues to experiment. For an RPG that pitches endless possibilities, I can’t help but shake my head at how shallow it ends up being.

Level design doesn’t always lend itself to the stealthy approach either. On occasion, you might come across a forklift that can be activated to reach higher ground or a doorway that can be forced open with the right skillset, but much too often you’ll hit a brick wall or artificial barrier in the world that makes aggression the only route forward. Our creativity is only taken into account during very specific circumstances, so playing the entire game as an assassin isn’t entertained. This takes me back to the Grand Imperial Mall mission. It’s a playground filled with gang members and loot, with our objective being a Netrunner nestled away in a small cinema. The thing is, sneaking past my enemies meant I bumped into him far too soon and missed the valuable context of what my mission was all about in the first place. I was taking part in conversations that felt unexpected and unearned, all because I decided to play Cyberpunk 2077 my way. I went against its rules and was punished, which is so backward. RPGs like this shouldn’t slap the player on the wrist for using its systems as intended, or create quests and levels that fail to accommodate more than the most basic approach. It’s way better than it used to be thanks to so many updates, but the core design of Cyberpunk 2077 is inherently flawed and sadly betrays the freedom it sells itself upon. I want to be a stealthy cyberpunk who operates from the shadows, but far too often I must expose myself to enjoy it all to the fullest. Maybe I’ll become a hacker instead and see what all the fuss is about.