Immersion is a term so overused in video game marketing that it’s become a bit of a meaningless buzzword. When it comes to virtual reality though, immersion means something very different. In gaming, immersion is a quality of a particular game’s design. If a game’s story, graphics, performances, and gameplay are working together to create an experience that sweeps us away, we say that the game is immersive. In virtual reality, immersion is a problem that needs to be solved through technological innovation. Every aspect of the VR interface that separates our physical bodies from the game world is a limitation that necessarily must be overcome. Immersion can only be glimpsed until the experience of playing a VR game is indistinguishable from the experience of being alive. In this sense, Virtual Reality is an aspirational name.

One of the most present barriers to true VR immersion is the problem of locomotion. Without an unlimited amount of unrestricted space, you can’t freely or safely move your body in VR. Location-based VR like The Void offers the chance to move around in VR in concise, linear experiences, but consumer VR platforms like the Oculus Quest 2 can only offer thumbstick controls (or the vastly inferior point-and-teleport) for locomotion. Cybershoes are an attempt to solve this fundamental problem. Simply put, Cybershoes allow you to move your feet in order to move around in VR.

I say “move your feet” as opposed to walk around because the experience of using Cybershoes does not feel like walking. For one thing, you have to be sitting to use Cybershoes, meaning you’re not walking so much as you’re sliding your feet back and forth. You can “walk” with Cybershoes in the same way that you can “grab” things with the touch controllers by reaching out and pressing the grip button. It’s another interface that helps us get closer to true immersion. Cybershoes is an important step towards that goal, but it’s not the immersion solution you might be hoping for.

Cybershoes are not the first product to try to solve the walking problem, but it is the most elegant and affordable option out there. For $400 USD you can get the Cybershoes Gaming Station, which includes the shoes, the Cybercarpet, and the Cyberchair.

The Cybercarpet is a round, low pile carpet measuring five feet in diameter. On its own it creates a pretty great play space for both standing and sitting. I found that I need another foot or so around it while using the Cybershoes in order to have enough room while playing because I was kicking objects close to the carpet, so it may not work optimally in a corner or small space. Otherwise, there’s not much to say about it, it’s simply there as a surface that the Cybershoes work optimally upon. 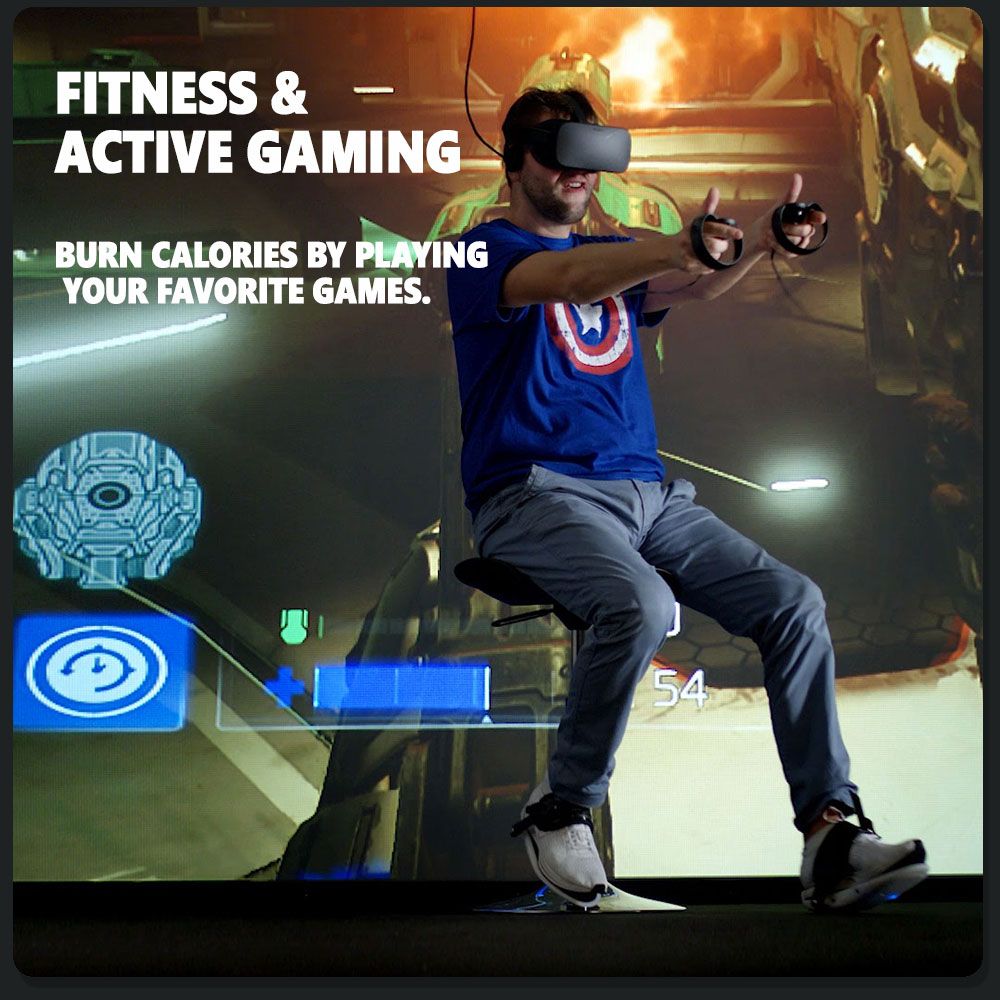 The Cyberchair, on the other hand, is a revelation. It’s nothing more than an adjustable barstool with a low back, but it’s absolutely the best tool for seated play with or without the Cybershoes. There’s nothing to obstruct your hand movement, you can turn freely, and it’s easy to hide away when you’re not using it (or turn it into a makeup chair as my partner intends to). I would use the Cyberchair exclusively for seated play from now on even without the shoes, but unfortunately, mine seems to have a defect. It’s very slightly off-balance such that turning one way makes me lean forward slightly while turning the opposite way makes me lean back. It’s as if the floor is slanted and it’s just noticeable enough to make me really uncomfortable when playing. I assume my review unit is just defective and they aren’t all like this.

Setting up the shoes is incredibly straightforward. There’s a small receiver that sticks to the front of your headset and plugs into the charging port. From there, all you need to do is turn on the shoes, Bluetooth pair them to the Oculus, and start playing one of the supported VR games. You put on the Cybershoes by pulling a strap over your shoes and ratcheting them down like you would a snowboard. They’re fairly light and stay secure even for long sessions. I found the actual sensation of wearing the shoes to be extremely unobtrusive. It’s the most “invisible” external interface I’ve used in VR and I think Cybershoes should be commended for designing a locomotion solution that is so simple to use and doesn’t require wires, bungee cords, or semi-permanent installations in your home. This is the ideal way to deliver a consumer VR upgrade.

Each of the Cybershoes has a little roller on the bottom. When the roller moves clockwise, you walk forward, when it moves counterclockwise, you walk backwards. To walk, all you need to do is lift your foot, place it forward, and then drag it back towards you across the carpet. The faster you alternate sliding your feet back, the faster you will walk…sort of. 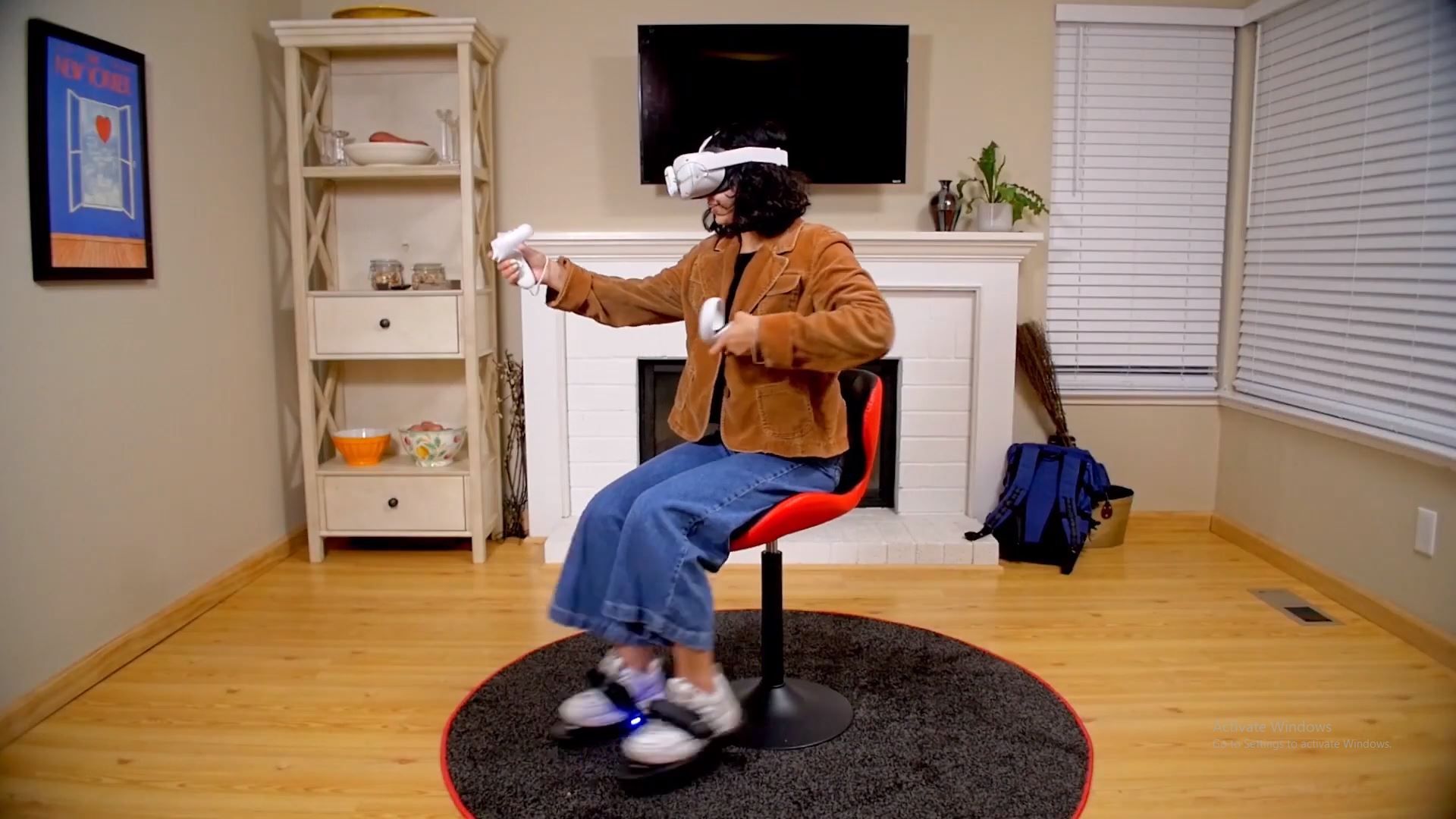 I’m describing the physical action of using Cybershoes this way because I’m trying to emphasize how unlike walking it is. Yes, you are extending your leg, placing your foot on the ground, and then recentering your body by sliding your leg back, but at no point does this ever feel like walking, and it’s not just because you’re sitting down.

Cybershoes have the same problem that a lot of add-on gaming accessories have, both in and out of VR. The games simply were not designed for this control scheme, which creates  a number of problems. Firstly, one-to-one motion, something I would consider a necessity for Cybershoes to be effective, is not even close to achieved in any of the games I tested. By one-to-one motion, I mean that the speed you walk in the game matches the speed of your feet. Cybershoes fails miserably at matching speeds.

When you use the touch controller to walk around. You have some degree of speed control by applying more or less pressure on the stick. You can push the stick all the way to achieve the top walking speed. Then you can press the stick down to run. Running only has one speed.

This is why Cybershoes do not work. They aren’t able to accurately translate the movement of your feet because that motion is necessarily translated into the walk/run toggle control scheme. Moving your feet at a normal walking pace is translated into barely a crawl in-game, akin to slightly pushing the control stick forward. To reach the top walking speed (pushing the control stick all the way forward) you have to really hustle. Then, the speed difference between full speed walk and run, which is monumental in-game, is completely impossible to approximate with your feet. This means you will need to move your legs like you’re running full speed but you’ll constantly toggle back and forth between walking speed and running speed in the game, seemingly at random. There is a sensitivity slider on the receiver, but anything less than the max makes this problem even worse.

What’s more, the rollers don’t have nearly enough momentum. The fraction of a second between each foot sliding back, even if you’re moving your feet as fast as you can, creates an unnatural, jerky motion in the game. This experience was consistent across Walking Dead: Saints & Sinners, Journey of the Gods, and Myst. The entire experience feels like a nightmare where you’re trying to run but you can barely move. 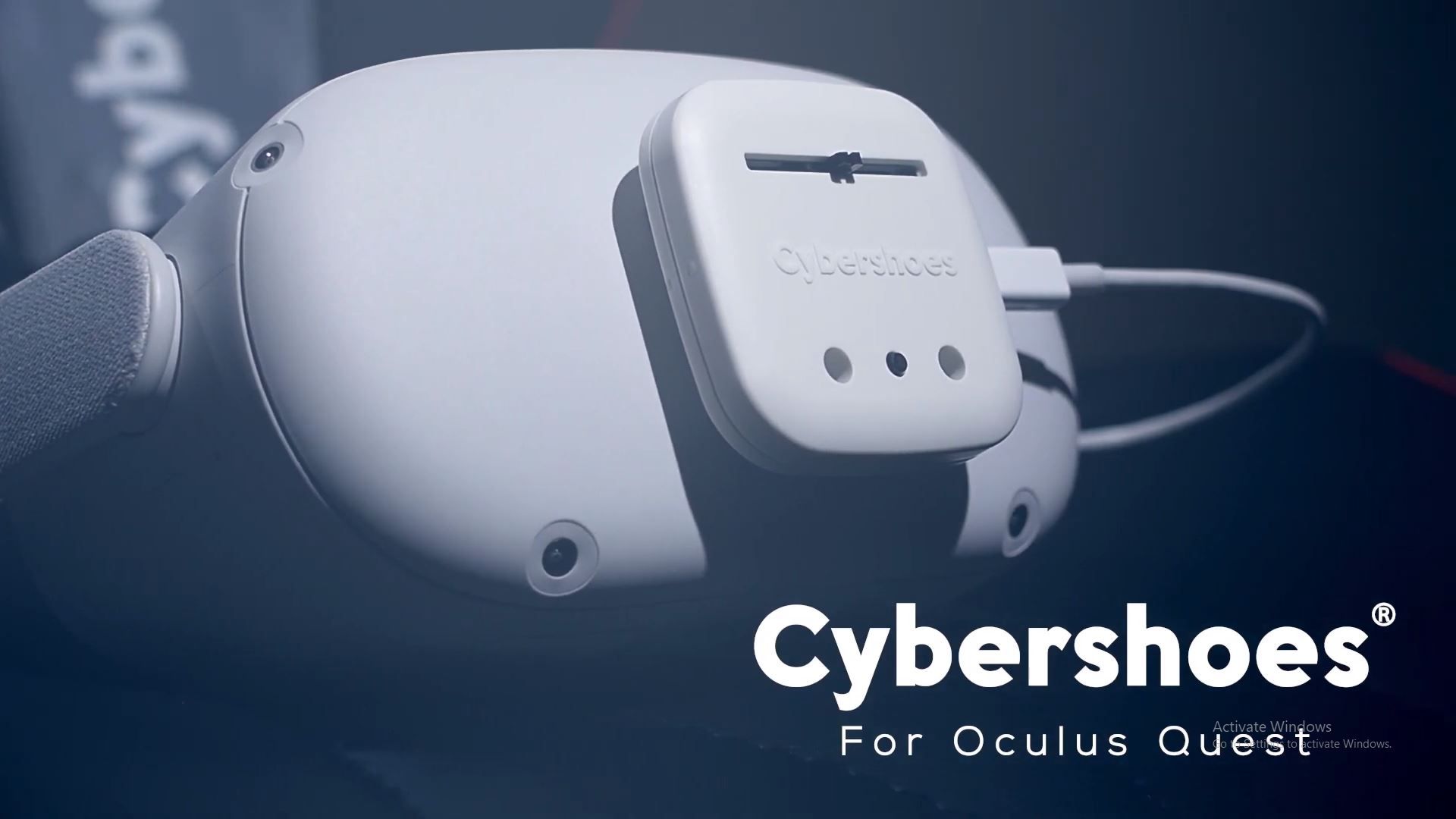 I think a game designed from the ground up with Cybershoes functionality would improve the experience a lot, but for the games that supposedly have Cybershoes support, this is the uncanny valley of walking. It seems so close, but the gap between your physical body and your in-game body is so overt that the entire experience is categorically worse than just using a controller to walk around. I don’t have a ton of faith in the rollers if I’m being honest, and while I was wearing the shoes it seemed to me that just running in place would be more comfortable and give me more control than this foot slide technique. I have a feeling that feet sensors, not rollers, are going to be the better solution.

Every innovation brings us closer and closer to immersion, and I think the Cybershoes do a couple of really important things. It’s affordable both in terms of price and space requirements, and it’s so easy to set up and use. The barrier to entry is very low and that’s going to be so important for the future of VR, as evidenced by the $300 price point of the Quest 2. I also think it’s the exact kind of minimalist solution we need. No cables or wires, no harness or bungee chords, it’s just a little adapter and some plates you strap to your shoes. I like everything about Cybershoes except actually using them. That’s obviously a big problem, but I still look at this product as a step in the right direction for more immersive VR.

Next: ‘Wireality’: A New Device For VR, Simulates The Feeling Of Walls And Solid Objects 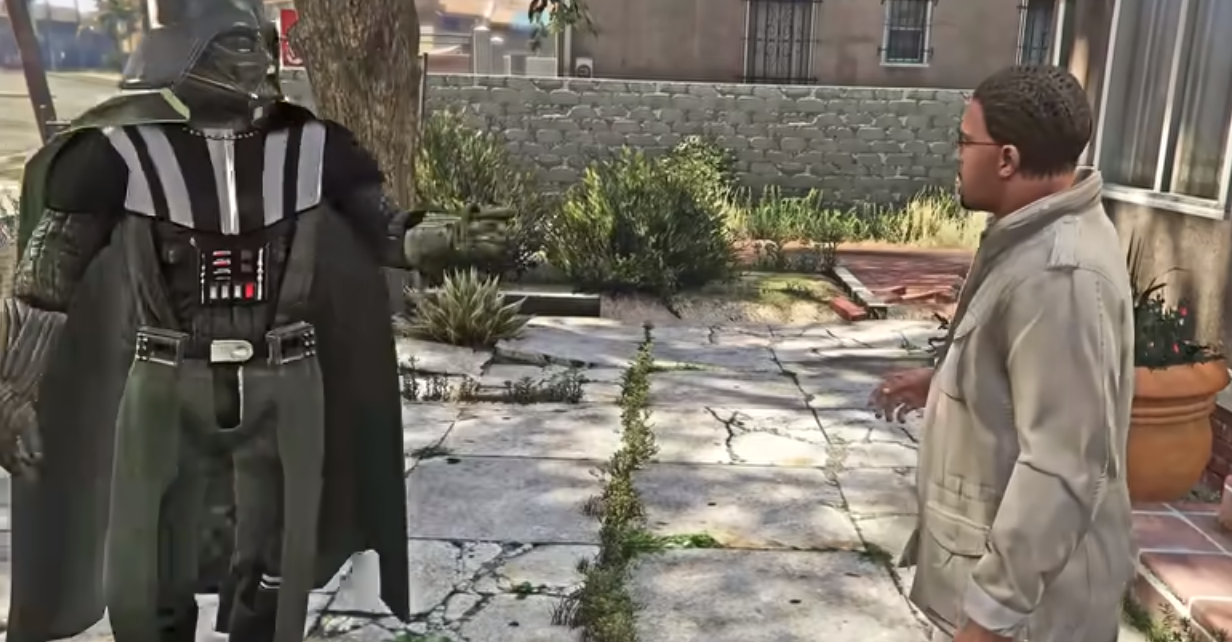