Dark Souls 3, much like its predecessors, has multiple endings at the end of the Ashen One's journey. However, in Dark Souls 3's case, one of the endings can change the cycle of rekindling the First Flame and the Age of Dark, but it requires a lot of time and effort to do so.

But, even with the option to change the course of history in Dark Souls 3, what does it all mean? Which ending is canonical, and is it truly the end to the series we all know and love? For some of these questions, there is a clear-cut answer. Others require a much more complicated answer, which is always expected with Dark Souls.

To Link the First Flame 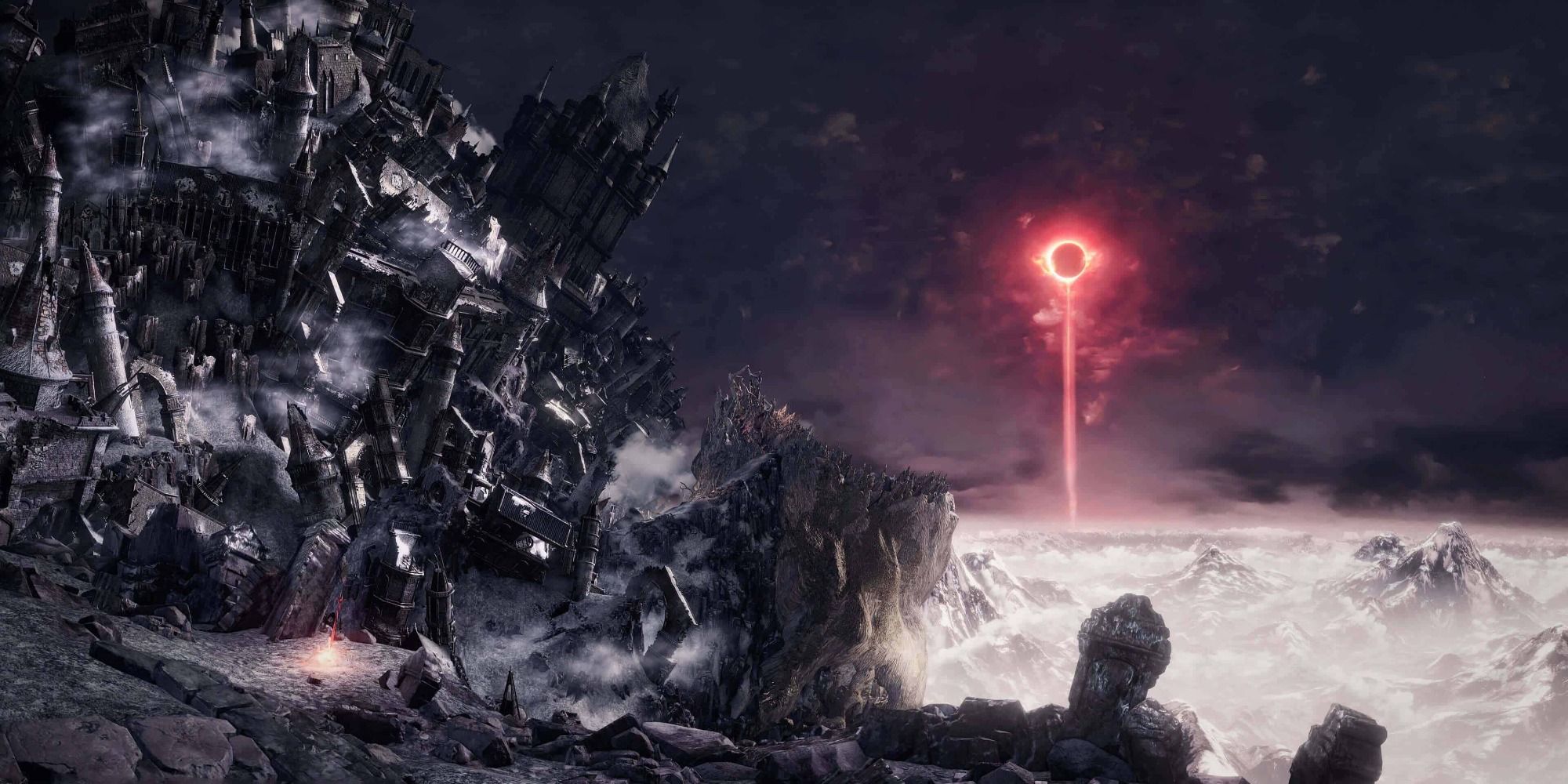 Prince Lothric was the next in line to sacrifice himself to the First Flame and the last hope of his line. However, instead of rekindling the Flame, he decided to watch it fade from a distance with his brother. Prince Lothric's decision would put the entire Kingdom of Lothric in grave danger, tolling the bell that raises the old Lords of Cinder from their graves as a last-ditch effort to relink the Flame.

Even with the old Lords of Cinder back from their graves, the plan continues heading south as they abandon their thrones and decide to let the First Flame fade, wanting the Age of Dark to begin. As a result, the Unkindled would rise, which is where your journey starts in Dark Souls 3. It is up to you, Ashen One, to take down the previous Lords of Cinder and return them to their thrones to keep the Age of Fire going.

Yes, indeed. It is called Lothric, where the transitory lands of the Lords of Cinder converge. In venturing north, the pilgrims discover the truth of the old words. “The fire fades, and the lords go without thrones.” When the link of fire is threatened, the bell tolls, unearthing the old Lords of Cinder from their graves. Aldrich, Saint of the Deep. Farron’s Undead Legion, The Abyss Watchers. And the reclusive lord of the Profaned Capital, Yhorm the Giant. Only, in truth… The Lords will abandon their thrones. And the Unkindled will rise. Nameless, accursed undead, unfit even to be cinder. And so it is. That ash seeketh embers.

The first ending in Dark Souls 3 follows the "intended" path of the Ashen One, who is the last possible hope of relinking the First Flame and saving the Kingdom of Lothric. After slaying Aldrich, the Abyss Watchers, Yhorm the Giant, and Prince Lothric and his elder brother Prince Lorian, you place their ashes back on their thrones, gaining access to the Kiln of the First Flame. Here, you will battle the Soul of Cinder, which is the manifestation of every Lord of Cinder who pledged their life to rekindle the Flame.

After defeating the Soul of Cinder, you will sacrifice yourself to the First Flame to prolong the Age of Fire. Unlike the previous entries, looking around the Kiln of the First Flame and the general state of the outside world may indicate that this is the worst possible outcome and decision you could make. So, perhaps looking into the other methods may be best for the world at large?

The End of Fire 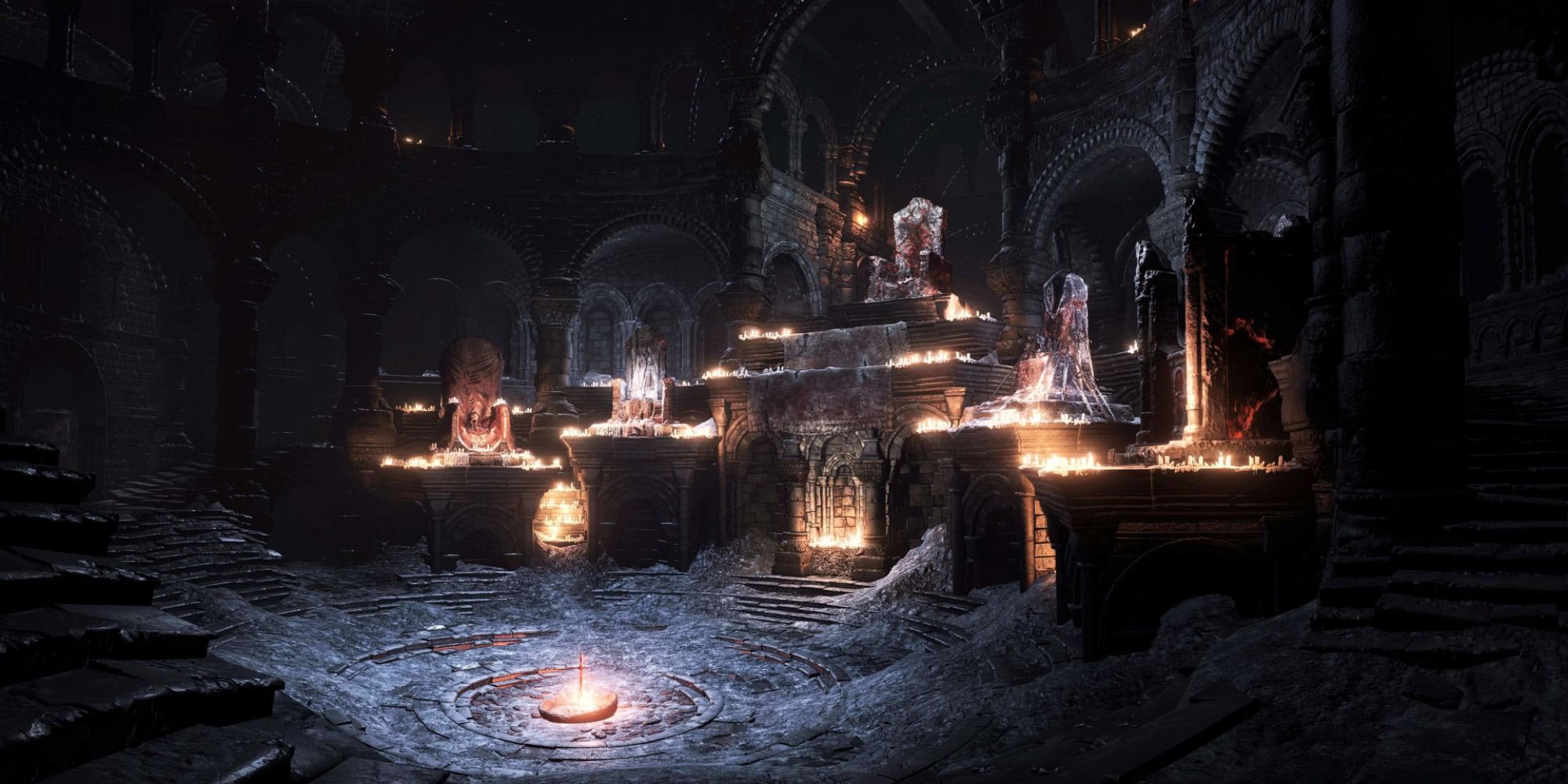 Rather than relinking the First Flame as is expected of the Ashen One, you can choose to let it fade after fighting all the way to the Kiln of the First Flame. However, you must have visited the Untended Graves version of the Firelink Shrine to obtain the Eyes of the Firekeeper. Giving the eyes to the Firekeeper and summoning her after slaying the Soul of Cinder will prompt The End of Fire ending.

Though if the Firelink Shrine found within the Untended Graves is anything to go by, heading down this path seems just as dire as relinking the First Flame. Here we meet another version of Gundyr, who has the prefix "Champion" rather than "Iudex," seemingly implying that he was summoned in this timeline as the Ashen One but arrived far too late, long after the First Flame has faded. The description of Champion Gundyr's armor and Soul seem to indicate this as the case:

Gundyr's Armor: Gundyr, or the Belated Champion, was bested by an unknown warrior. He then became sheath to a coiled sword in the hopes that someday, the first flame would be linked once more.

Soul of Champion Gundyr: Once, a champion came late to the festivities, and was greeted by a shrine without fire, and a bell that would not toll.

However, if this is still better for you than keeping the Age of Fire alive, you will have to make it back to the Kiln of the First Flame. In this ending, the Firekeeper helps you usher in the Age of Dark by absorbing the First Flame into her bosom, which is rife with Dark Humanity. Though, in the final moments, the Firekeeper leaves us with a rather hallowing statement of the Age of Dark, letting us know that our efforts simply don't matter, yet again:

The First Flame quickly fades. Darkness will shortly settle. But one day, tiny flames will dance across the darkness. Like embers, linked by lords past.

The Firekeeper's last words seem to imply, much like Straid of Olaphis in Dark Souls 2, that no matter what we do, the cycle will continue. Essentially, these cycles will continue happening with no end in sight, whether you rekindle the First Flame or let it fade. If you choose to usher in the Age of Dark, the First Flame will rise from the ashes, while relinking it only prolongs it before someone else ushers in the new era. 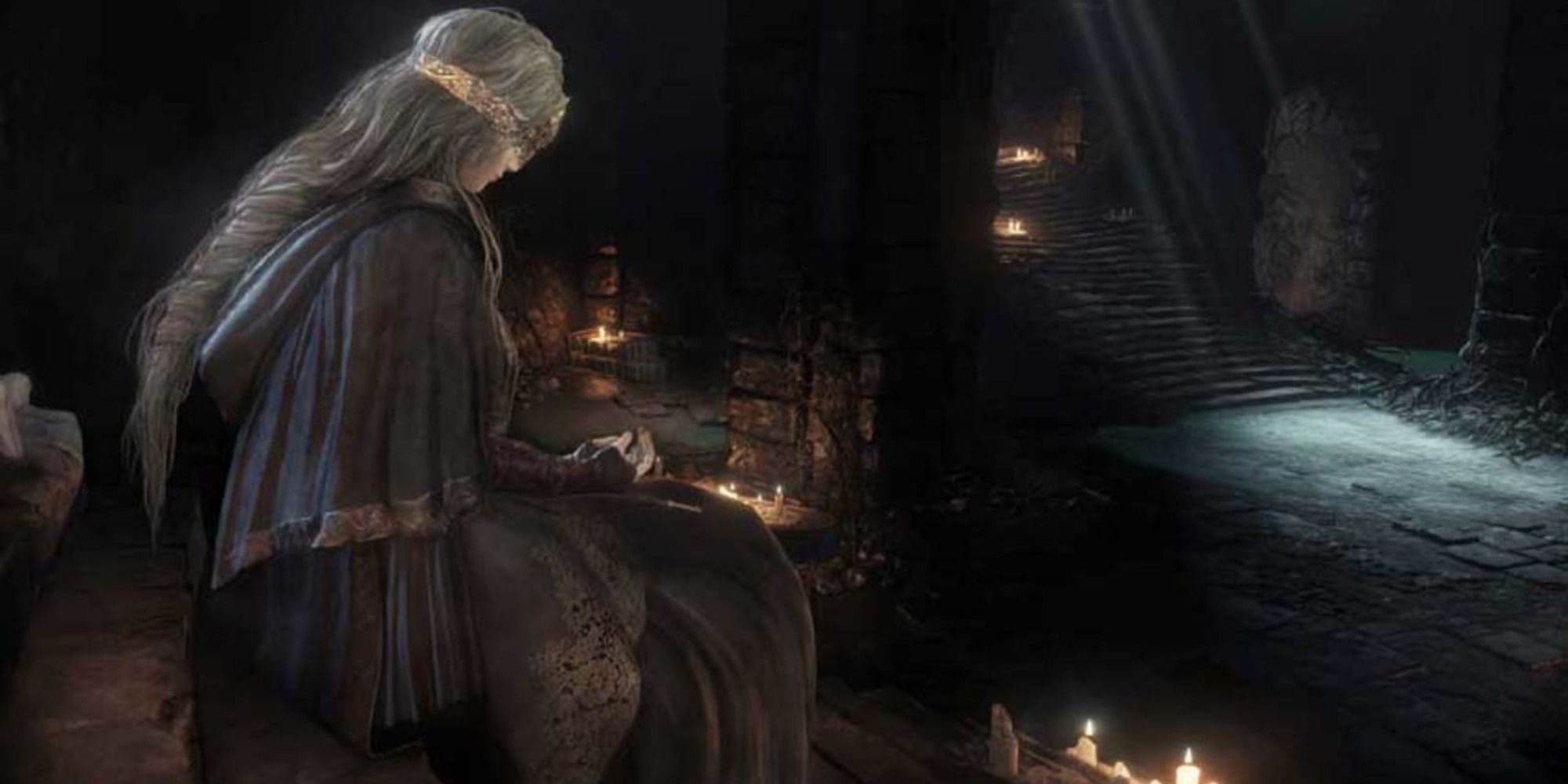 Additionally, the player can unlock a secret, additional ending by giving the Firekeeper the eyes found in the Untended Graves. In this ending, the playable character's bloodlust gets the best of them, and they will do whatever it takes to feel the warmth of the First Flame. Instead of having the Firekeeper absorb the First Flame into her bosom, the playable character kills her, taking the Flame for themselves.

This ending changes nothing within the grand scheme of things, as the First Flame will fade, or someone will come along and rekindle it. While it's technically a separate ending from the "End of Fire" one, it is viewed as an alternate ending and follows the same logic and story beats as the entry above. The only difference is the Ashen One in this tale is out of control and wants to kill everything in sight. Though with the acts you commit in the final ending, this ending might be considered tame.

The Usurpation of Fire 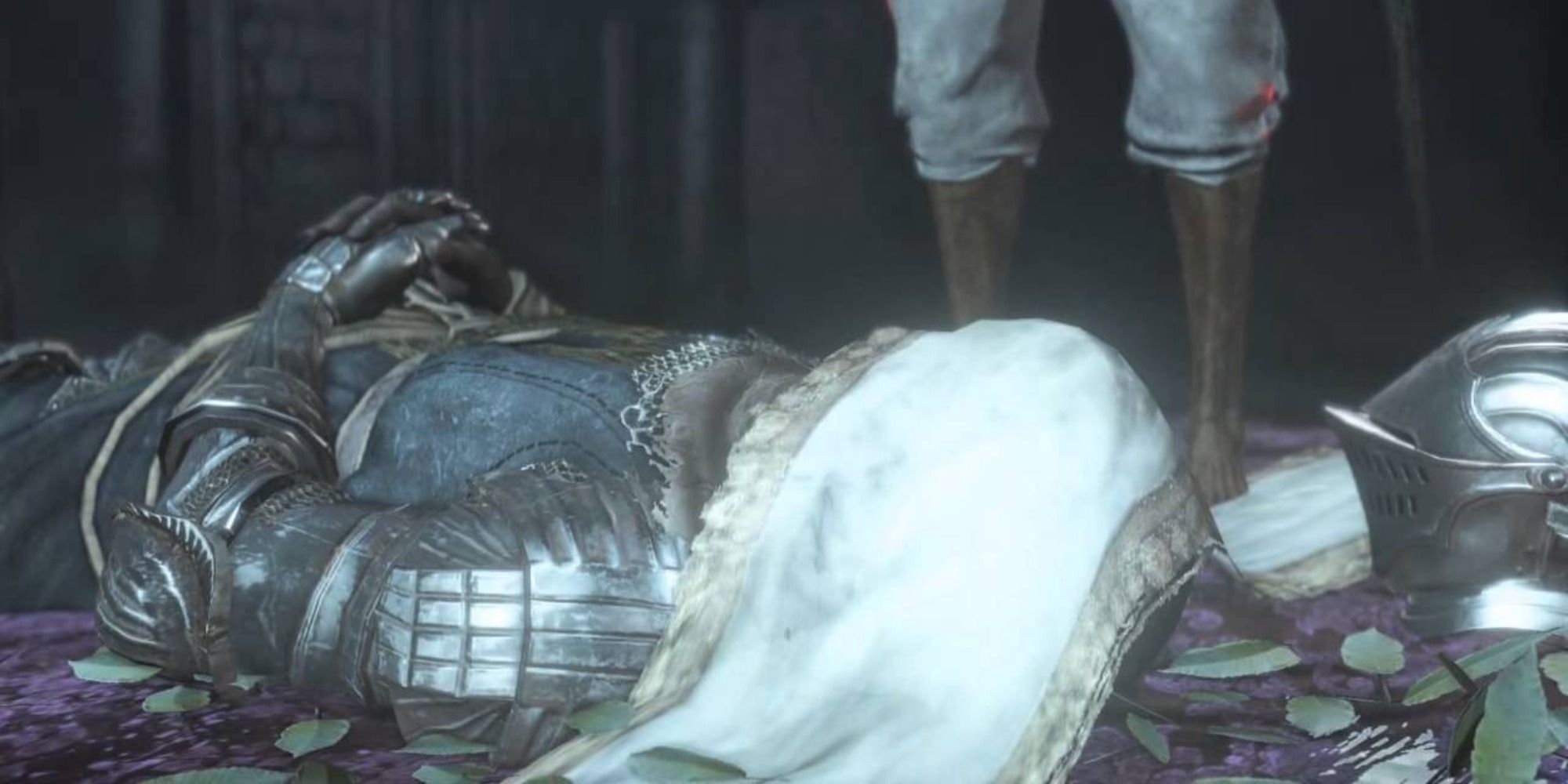 The final ending of Dark Souls 3 is the most interesting and the one that has the most promise… despite you committing some pretty egregious acts to get there. In this ending, you decide to align yourself with the Sable Church of Londor. This group is led by a familiar face from the first Dark Souls, the Primordial Serpent, Darkstalker Kaathe, which becomes evident when hearing the last words of his maiden Yuria of Londor:

Kaathe, I have failed thee…

When first jumping on the long path that leads you to this ending, you will rescue the Pilgrim, Yoel of Londor, and have him give you the Dark Sigil by letting him draw out your true strength, resembling the Undead Mark (or Darksign) from the original game. After becoming Hollow, you will become wed to Anri of Astora (this is, of course, after you murder her friend Horace in the Smouldering Lake), with a wedding ceremony carried out with the help of Yuria. Except, in this case, marrying Anri is more of a sacrificial ritual, where you plunge a blade through her face to absorb her Dark Sigil. But, you know, semantics and all that.

While it may seem like your actions are merely diabolical, they do serve a purpose. To play the Usurper to the First Flame, you must carry out these heinous acts, which will potentially allow you to break the cycle once and for all. That is if you are willing to believe Darkstalker Kaathe, which can be a hit or miss in all honesty. However, by the time Dark Souls 3 takes place, Kaathe realizes that ushering in the Age of Dark simply isn't enough to end the cycle and more needs to be done if that is to become a possibility. Enter the finale.

In this ending, the Ashen One — now Lord of Hollows, approaches the First Flame and starts burning, then the Flame just as quickly gets absorbed by the Dark Sigil. While the First Flame doesn't get rekindled, it also doesn't fade. It gets Usurped, stolen by the Lord of Hollows, infusing it with their being. This makes the Unkindled, Kindled, and the Hollows the new "Gods," so to speak.

Unlike the other endings, this is the most promising out of the bunch and has the "happiest" future. Well, as happy as you can get in the world of Dark Souls. This ending implies that Hollows get to remain sane while the cycle gets broken. But is it the canonical ending?

Which Ending Is Canon? 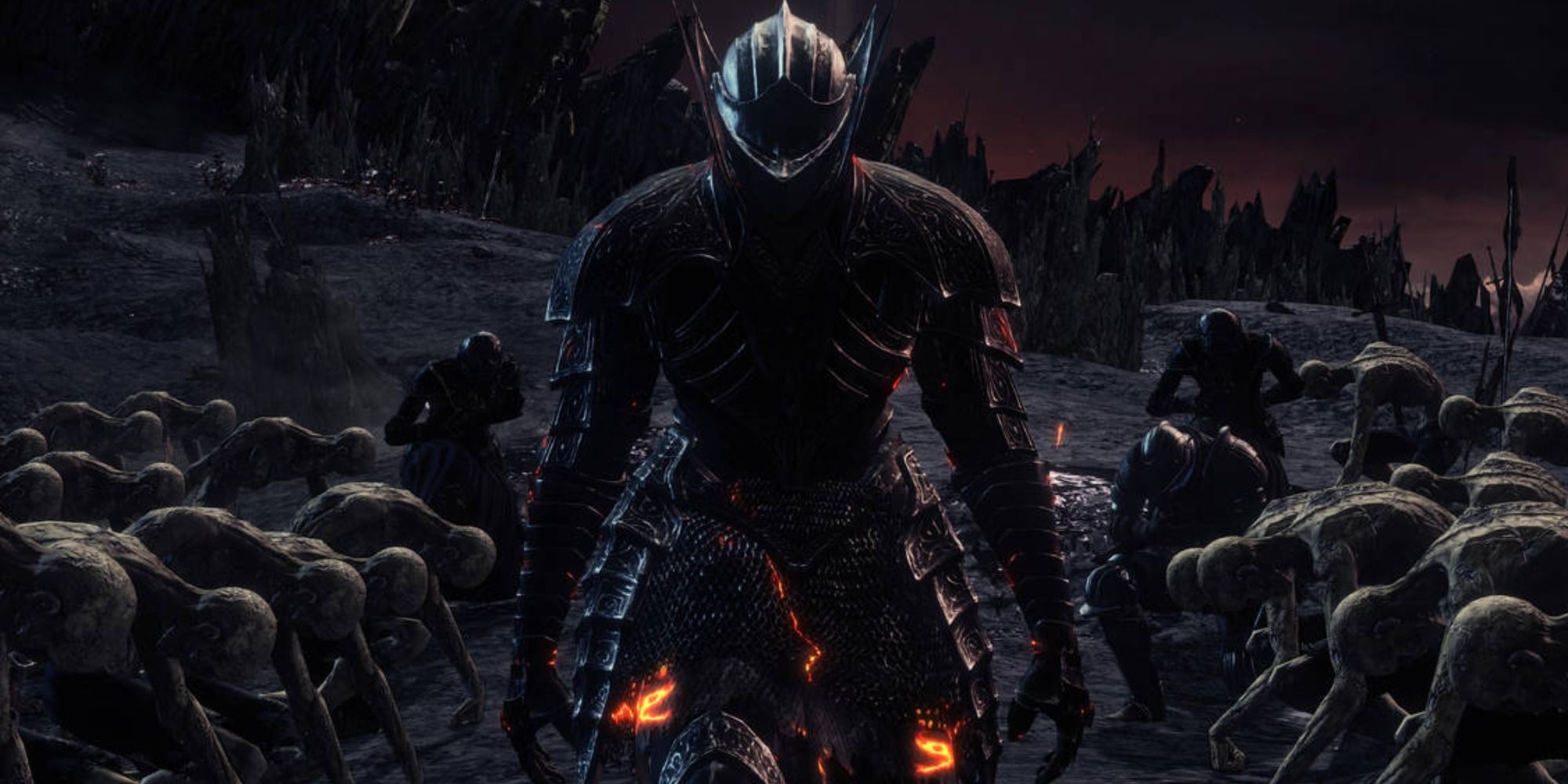 When we finally get a "good ending" in Dark Souls, we so desperately want to deem it the canonical ending and end all discussion there. However, as with every other installment in the series, it wouldn't be a Souls title if it were that simple, right?

Much like Dark Souls 1, there is no true "canon ending" in Dark Souls 3. And, much like the original Dark Souls title, it may come across as yet another cop-out. However, unlike its predecessors, one of its endings is one of greener pastures and hope and finally puts an end to the vicious cycle of the First Flame and Age of Dark.

The true canonical ending is the one you choose in Dark Souls 3, which may sound corny, but stick with us here. Do you want the Age of Fire to reign supreme? Then keep it going. You have that choice. Want to usher in the Age of Dark? Have at it. Just know it will eventually end. However, if you want to end it all and break the cycle entirely, steal the First Flame and usher in a new era — one where Hollows have back their sanity and rule the lands as gods.

Though, as a point of opinion, since Hidetaka Miyazaki confirmed this is the last installment in the series, breaking the cycle feels right. It feels like the perfect ending to the endless cycle of despair created by the First Flame and the Age of Dark that tried to overtake it. Though not the "canon ending," it definitely feels the best.