Destiny 2: Season 14 introduces a new quest item called the Splicer Gauntlet as well as a new vendor Splicer Servitor.  While the Servitor is primarily used to upgrade the gauntlet, the gauntlet itself acts as a key to bigger and better rewards in the new seasonal activity, Override. Both tools will be somewhat familiar to players of past seasons, but as always, they each have their own unique quirks and interactions to learn. Here is our comprehensive guide to Season of the Splicer’s two new systems: the Splicer Gauntlet and Splicer Servitor.

How Does The Splicer Gauntlet Work?

Much like Season of the Hunt’s Cryptolith Lure and Season of the Chosen’s Hammer of Proving, the Splicer Gauntlet is your key to unlocking greater rewards when completing Overrides, the new seasonal activity. Before you can use the Cryptolith lure, however, you’ll need to power it up with Ether.

Ether can be collected simply by playing the game. You can run playlist activities, participate in public events, or simply defeat opponents anywhere in the system to gather Ether. The process of gathering Ether will be slow at first, but by applying upgrades in the Splicer Servitor, you’ll be able to acquire Ether much quicker as the season progresses.

Once you’ve saved up enough 50 Ether, you can Key Code. When the season starts, you’ll only be able to hold three Key Codes at a time, but this can be increased through Splicer Servitor upgrades. These Key Codes can then be spent at the end of any Override activity to unlock a Conflux Chests. Conflux Chests are in addition to the normal chests found at the end of the activity and reward things like seasonal weapons and armor, Synthweave material, and Decrypted Data. You’ll need to open a certain number of Conflux Chests to complete your seasonal challenges each week. Additionally, opening Conflux Chests and gathering Decrypted Data will give you the ability to buy upgrades for the Splicer Gauntlet that will further increase the rewards you can earn. 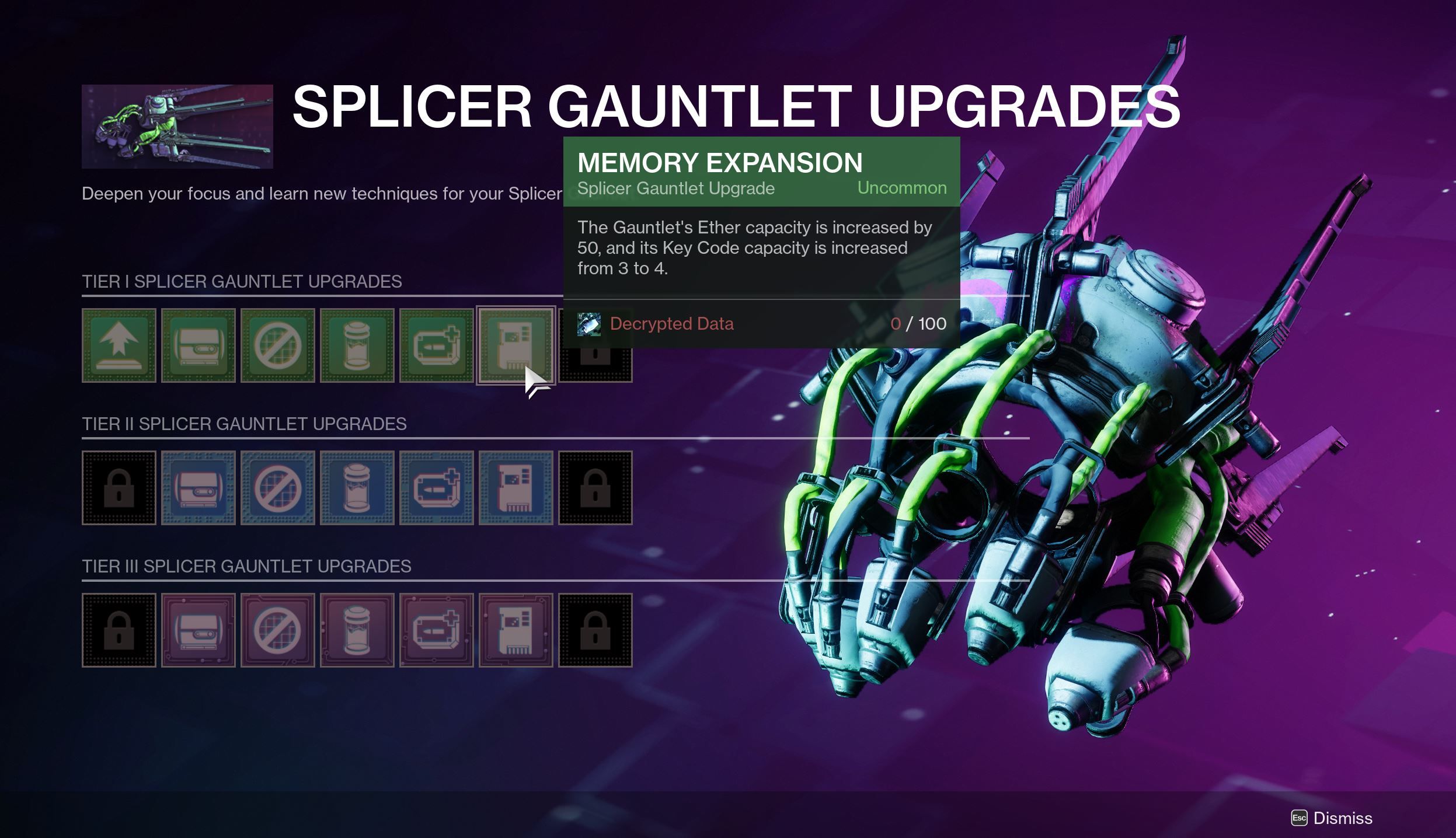 How Does The Splicer Servitor Work?

The Splicer Servitor is fairly similar to past seasonal vendors, such as the Prismatic Recaster and Crow from Season of the Hunt. You’ll find the recaster on the west side of the H.E.L.M, which has been relocated on the map and can now be found just above The Tower.

Every time you earn Decrypted Data, you’ll gain reputation in the Splicer Servitor. You do not need to spend your data on upgrades to earn reputation. You need to gather 300 Decrypted Data to increase your Reputation Rank from 1 to 2.

Every time you increase your Reputation Rank one level, you’ll unlock a new Elemental Well mod that can be purchased from the Servitor with mod components. You’ll need to collect enough Decrypted Data to level the Splicer Servitor all the way up to Rank 10 in order to unlock all of the available Elemental Well mods.

The other purpose of the Splicer Servitor is to upgrade your Splicer Gauntlet. As with the previous season, there are 21 upgrades that can be purchase using Decrypted Data. You won’t have access to anything on the second or third tier until you’ve purchased the upgrade directly above it. Additionally, some of the upgrades are not yet available and will become unlocked as the season progresses. 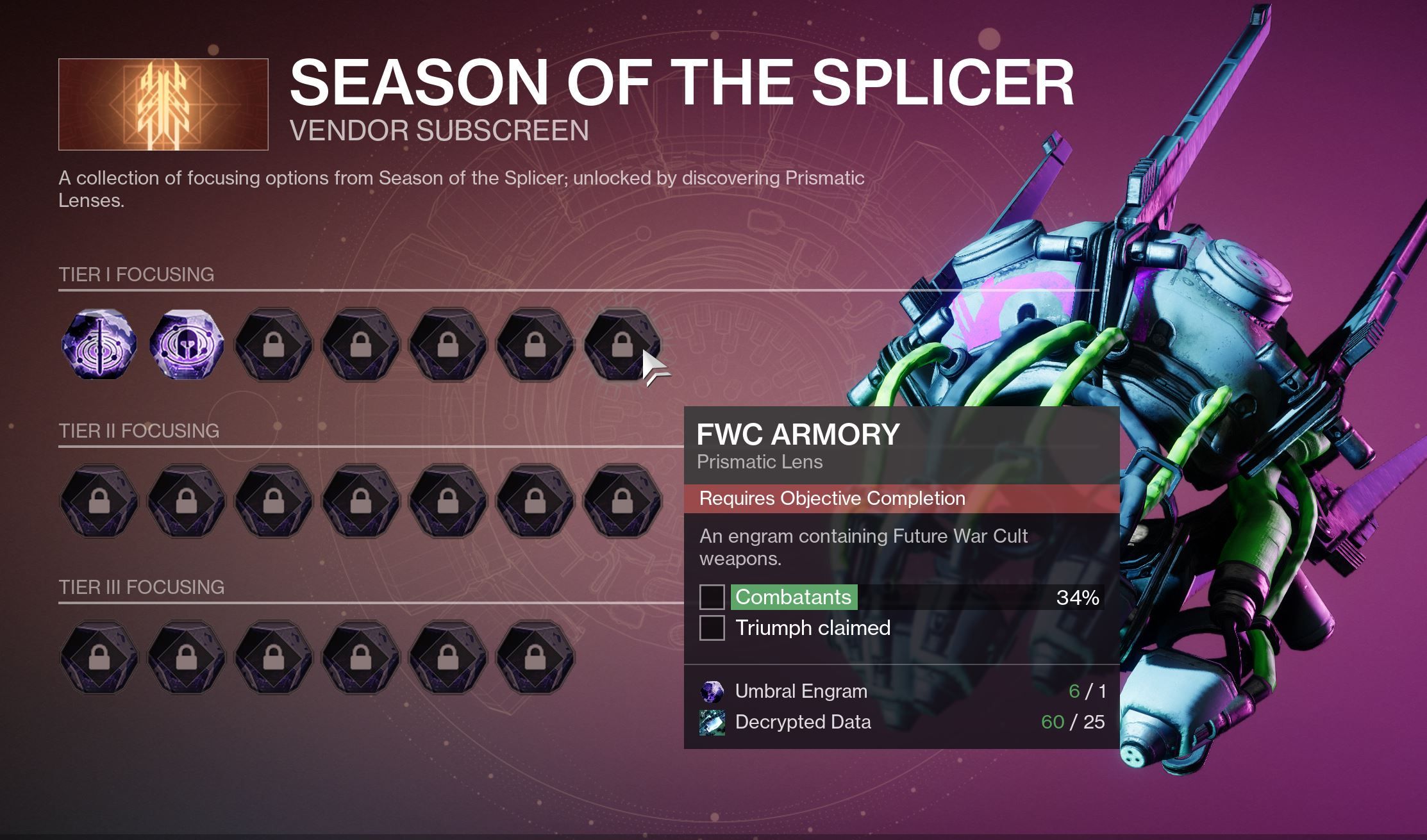 The Ether Filter line of upgrades is likely the best one to start out with, as it offers faster progression by way of more Ether from enemies. This means you can run Overrides more frequently and thus gather more rewards. After that, the Override Efficiency line is probably your best bet, as it increases the quality of your rewards from various types of chests, including the Conflux Chests from Override activities. Memory Expansion is a great upgrade to prioritize as well. It doesn’t technically offer any improvement to your ability to earn rewards, but it’s a nice quality of life upgrade that may help you feel like railroaded which activities you should be playing at any given time.

Where Do You Find Decrypted Data

Unlike most seasons (excluding Season of the Hunt) it appears that Decrypted Data acquisition isn’t time-gated, and you should be able to continuously earn this material as long as you’re playing the game. There are three ways to earn Decrypted Data: seasonal challenges, season pass ranks, and Conflux Chests.

You can earn 300 Decrypted Data per week by completing the first two Seasonal Challenges. This week, those challenges require you to complete the seasonal story mission, complete Override activities, and defeat powerful Cabal (which you can do in the Override activity). Each week will have two new activities that are likely very similar.

By progressing through the season pass ranks, you’ll earn a large amount of Decrypted Data three times. The battle pass rewards a Decrypted Data Trove at ranks 2, 12, and 32. These are one-time rewards.

Finally, you can earn Decrypted Data by completing the Override activity and opening Conflux Chests. The amount you earn is random and not guaranteed.

Once you’ve earned enough Decrypted Data, you can spend it either to unlock new Splicer Gauntlet upgrades, or to focus Umbral Engrams in the Prismatic Recaster.