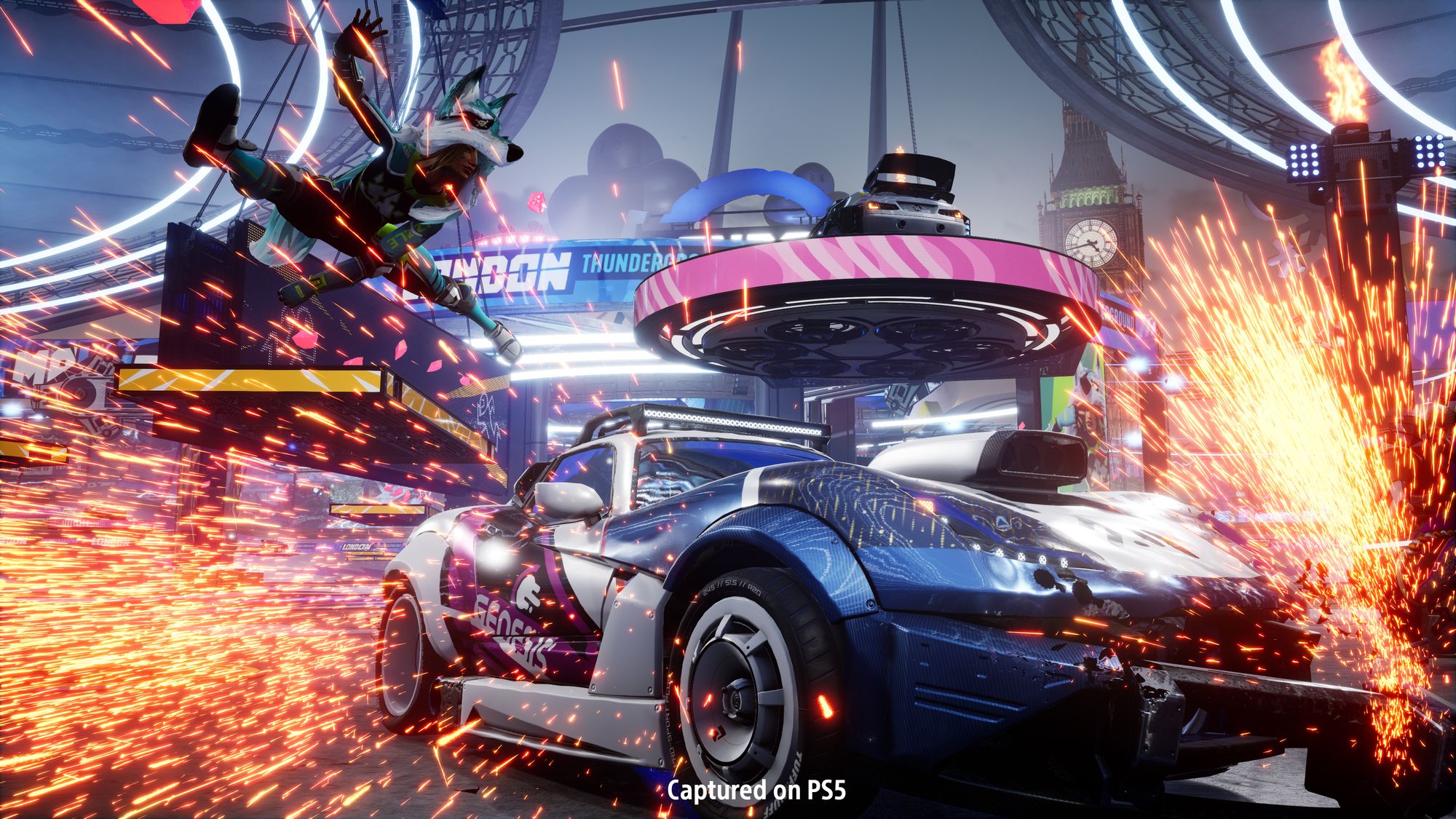 The first new PS5 game of the year is a vehicular combat game by the makers of Project Gotham Racing, and it’s free with PS Plus.

No one expected 2021 to start off with a bang, in terms of new games releases, but while there have been a few interesting titles, such as Hitman 3, the year has so far been notable mostly for its delays. Where once Ratchet & Clank: Rift Apart was implied to be coming out soon after launch of the PlayStation 5 its release date now remains a mystery. Housemarque’s Returnal has also been delayed until the end of April, which means Destruction AllStars is the first new PlayStation 5 exclusive of 2021.

Destruction AllStars was originally supposed to be a launch game, a normal retail title with a bafflingly high price tag of £70. To Sony’s credit they quickly realised that nobody was going to pay that for a brand-new IP from a largely unknown developer. So instead, they made it a free game on PS Plus, for the next two months, no doubt hoping to replicate some of the success enjoyed by Fall Guys.

Like Fall Guys, Destruction AllStars is also primarily a multiplayer title, a vehicular combat game not dissimilar to Sony’s own Twisted Metal series. Rather than the try-hard mythology of that franchise though the setting here is a much more straightforward sports event, albeit one that would never pass the most basic of health and safety tests in the real world.

The concept behind Destruction AllStars is very simple. You start off a match, either solo or in teams, in a large arena that is filled with cars that you can jump into and drive. The aim is to wreck your rivals’ car before they do the same to you, although you can get out at any time to run around the arena to either collect a fresh car or, if you can jump aboard, throw a rival out of theirs by completing a simple QTE.

And that’s pretty much it. There are no guns or weapons but each of the Overwatch-like characters has a signature vehicle which they can have delivered once they fill up a meter by either collecting crystal shards when on foot or wrecking enough rivals. Each vehicle also has a unique signature move but these vary wildly in usefulness from an almost pointless smoke attack to what is essentially a one-hit kill.

Drivers have a separate special meter too, that makes you faster and grants a different unique power, but there’s really very little reason to want to stay around on foot, especially given how tempting it is for other players to try and run you over.

Developer Lucid Games might not be a household name but many of their staff used to work at Project Gotham Racing and Blur developer Bizarre Creations. That explains why the cars handle so well, zipping around the relatively small and obstacle-filled arenas with enjoyable ease. Great use is made of the adaptive triggers to accelerate and there’s a shunt ability on the right analogue stick that acts as a brief turbo boost forward or to the side and is hugely satisfying when it connects with another car.

There’s no doubting that Destruction AllStars is a lot of fun to play, with tight controls, a good central concept, and a wide range of different characters and vehicles. Beyond the unbalanced super abilities the only real problem with the game is how long it’s likely to keep you amused. This comes down to three main factors: the general lack of content in terms of arenas and game modes, the lack of notable unlocks, and the innate shallowness of the gameplay.

The fact that the game is shallow is inarguable but how much that is a problem depends on your personal tastes. We can’t imagine anyone is going to be playing Destruction AllStars all night long but it’s a fun palette cleanser in-between other games and while we certainly wouldn’t advise paying £70 for it, or anything close to that, it’s a very welcome addition to PlayStation Plus.

The lack of content is a shame – it’s inconceivable that Sony could have ever thought a game this bare bones could be sold at full price – but while it’s free the promise of more content in the future leaves less room for complaints. Although that means for now there’s only three, largely indistinguishable, arenas and just four game modes, where the deathmatch style Mayhem is already by far the most popular.

The lack of unlocks is perhaps the most peculiar failure, given how hard the game tries to tempt you into paying for in-game currency via microtransactions. This is needed to buy some of the cosmetic items but why anyone would bother is a mystery. The skins are just different colours and patterns rather than genuinely different looks and none of it is interesting. With no ranked play or battle pass the game offers very little structure and seems to just expect you to want to keep playing random matches indefinitely.

It’s also aggravating that the most significant single-player content – a challenge mode that adds minor story elements – is locked behind microtransactions, with only the first one available for free. The cheapest costs 200 in-game credits but the smallest amount you can buy is 500, for £3.99. Which is so grubby and unpleasant it undoes all the goodwill from the game being free.

It’s also peculiar that party voice chat is always on, with no way to mute everyone at once unless you skip out of the game before every match. The DualSense has a built-in microphone that is on by default and during the first day in particular it was obvious that most people had no idea it was working, even if by now all is deathly quiet when you play. (Especially as, peculiarly, there’s no music during a match and very few sound effects beyond the sound of your car.)

Destruction AllStars is a fun little time waster but even if there were more arenas and game modes we’re not convinced it would ever feel like anything more. We are curious to come back to it in six months or so, once it’s no longer free and it has more content, but for now this is inarguably the least interesting of the PlayStation 5 exclusives and likely to stay that way for some time to come.

In Short: A fun, uncomplicated romp that’s a great way to relax for 20 minutes or so. Beyond that though it struggles to entertain, especially given the grubby approach to microtransactions.

Pros: The basic concept is a lot of fun, with some solid car controls and the most satisfying crashes this side of Burnout. It’s free.

Cons: Intrinsically shallow gameplay, with too few arenas and game modes. Dull unlocks and no other reward for progression. Cynical use of microtransactions and unbalanced special abilities.