The year 2022 was the biggest year for the Digimon Card Game. With its second year in the market, the DCG found ground in a sea of multiple card games. With its franchise-specific mechanic of Digivolution and its unique Memory system, the Digimon Card Game is a nice break from fishing for Lands in Magic: The Gathering or getting Ashed for the millionth time in Yu-Gi-Oh!.

Digimon's first year was a bit rough. With the worldwide COVID-19 pandemic affecting shipping all over the globe, getting anything was quite hard in that first year. Luckily, Bandai was able to overcome all obstacles to make 2022 a huge year for the Digimon Card Game. The game saw a myriad of meta cycles, new archetypes, and cards that were game-defining to outright broken. 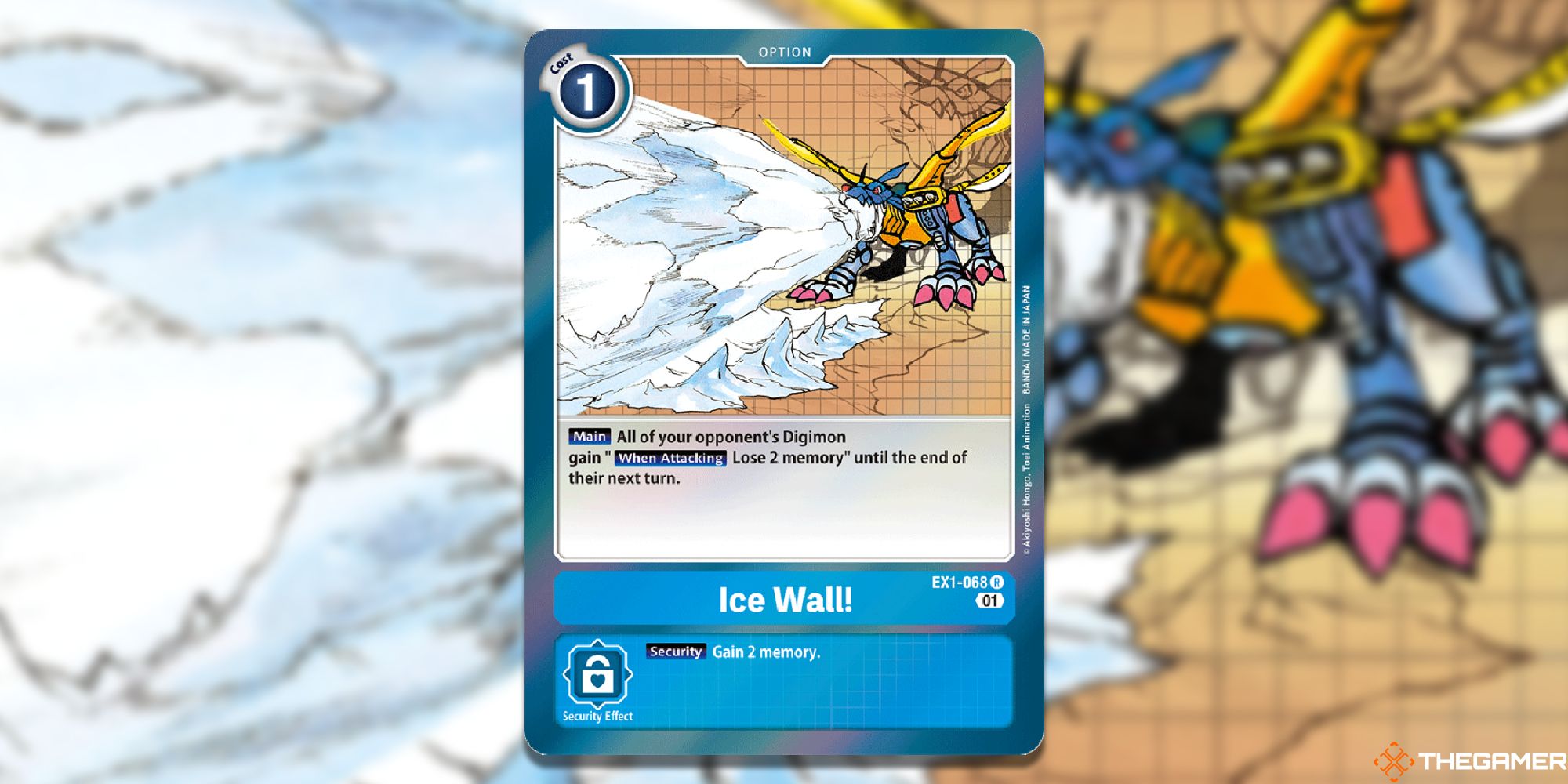 Starting the year off with the first side set in the game, EX-01 Classic Collection revitalized a lot of the artwork from the old and now defunct Digi-Battle Card Game.

Ice Wall! is one of the most powerful cards found in that set and immediately became a staple card in any blue deck. Its strong floodgate effect that limits your opponent's plays by giving all of their Digimon a "lose two memory" effect when attacking is what made Bandai decide to limit this card to one per deck. 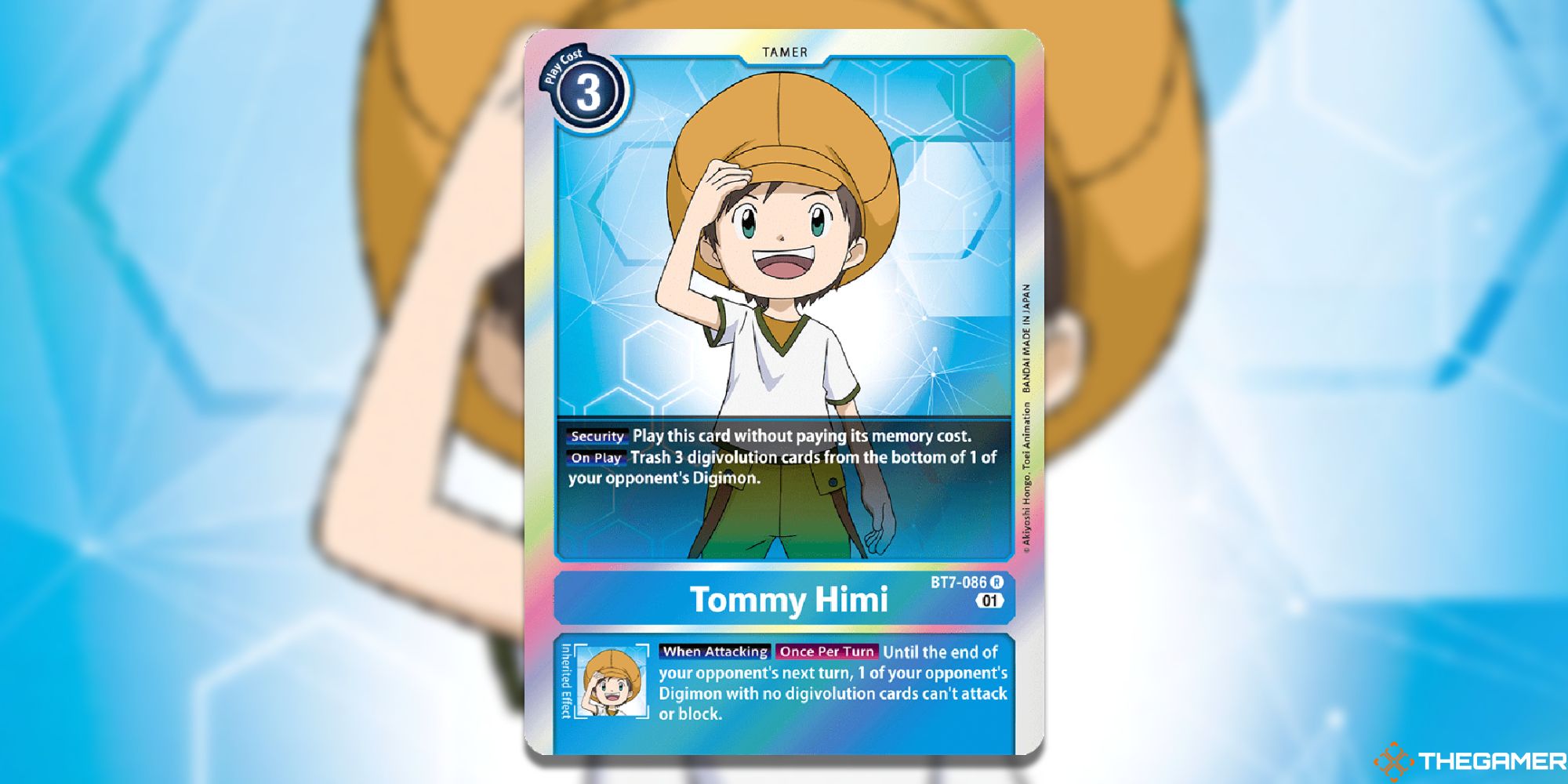 BT-07 Next Adventure introduces the extremely powerful Hybrid Digimon that ruled the meta for the better part of the year. Digimon like Agunimon and Beetlemon had strong decks to back them up with AncientGreymon OTK and Green Hybrid, respectively. Still, their power was unmatched compared to the likes of Kumamon and Korikakumon.

The two Hybrids combined with Tommy's inheritable effect to stun enemy Digimon was an oppressive effect that helped the Blue Hybrid deck climb the ranks and resulted in Tommy Himi being limited to one copy per deck. 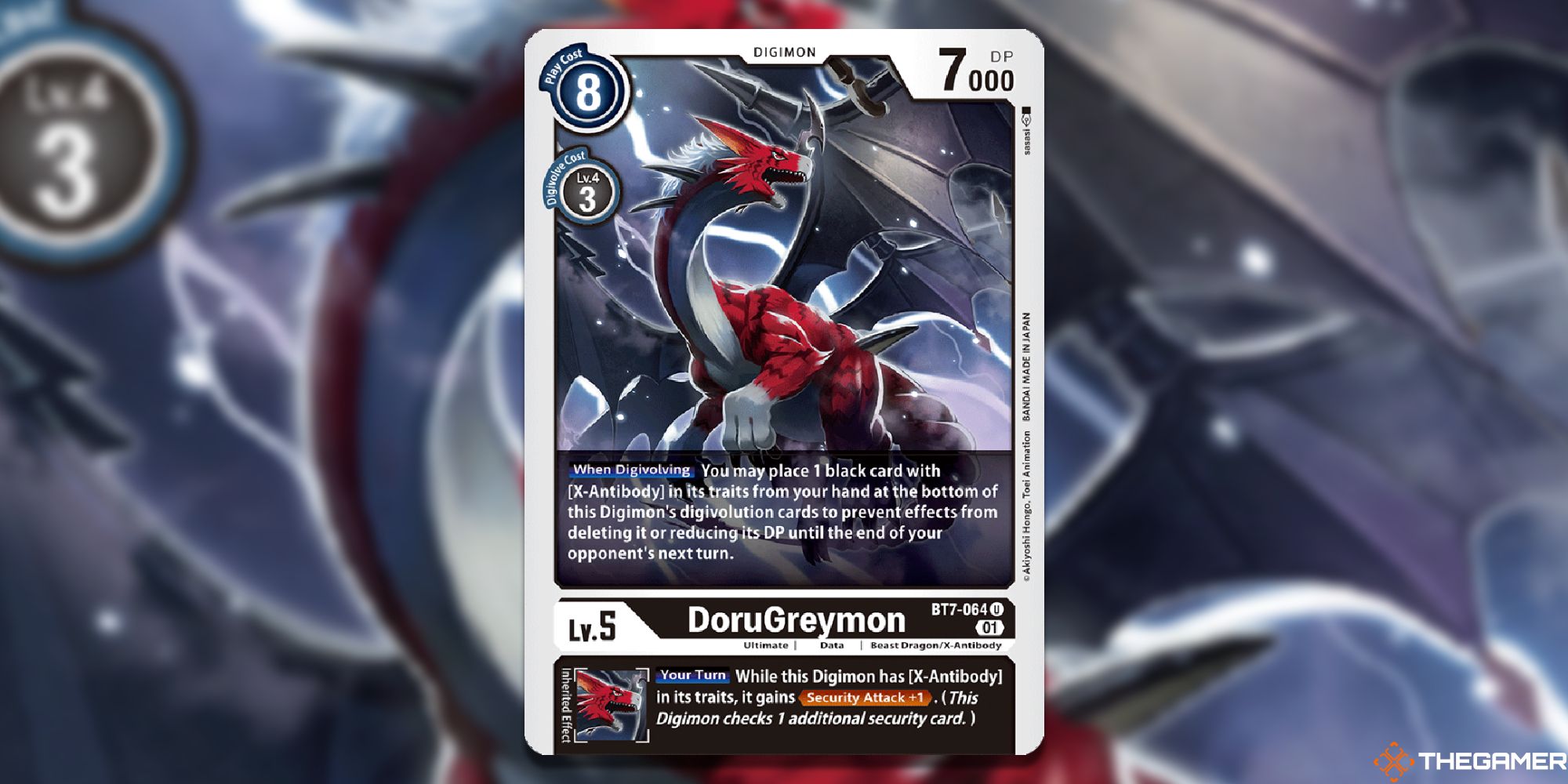 When Alphamon was first introduced in BT-06, it didn't make too many waves since its archetype support lacked quite a bit. That turned around with the release of BT-07. With new cards like Dorumon and the rest of its Digivolution line, the Alphamon deck became competitively viable.

The biggest piece in the Alphamon puzzle was DoruGreymon. This card was one of the first cards to have deletion protection. Making your Digimon stack unaffected by most deletion effects was a turning point in Digimon. DoruGreymon's protection, paired with giving your stack an extra Security Attack, gave this card a swift pass to the Limited To One list. 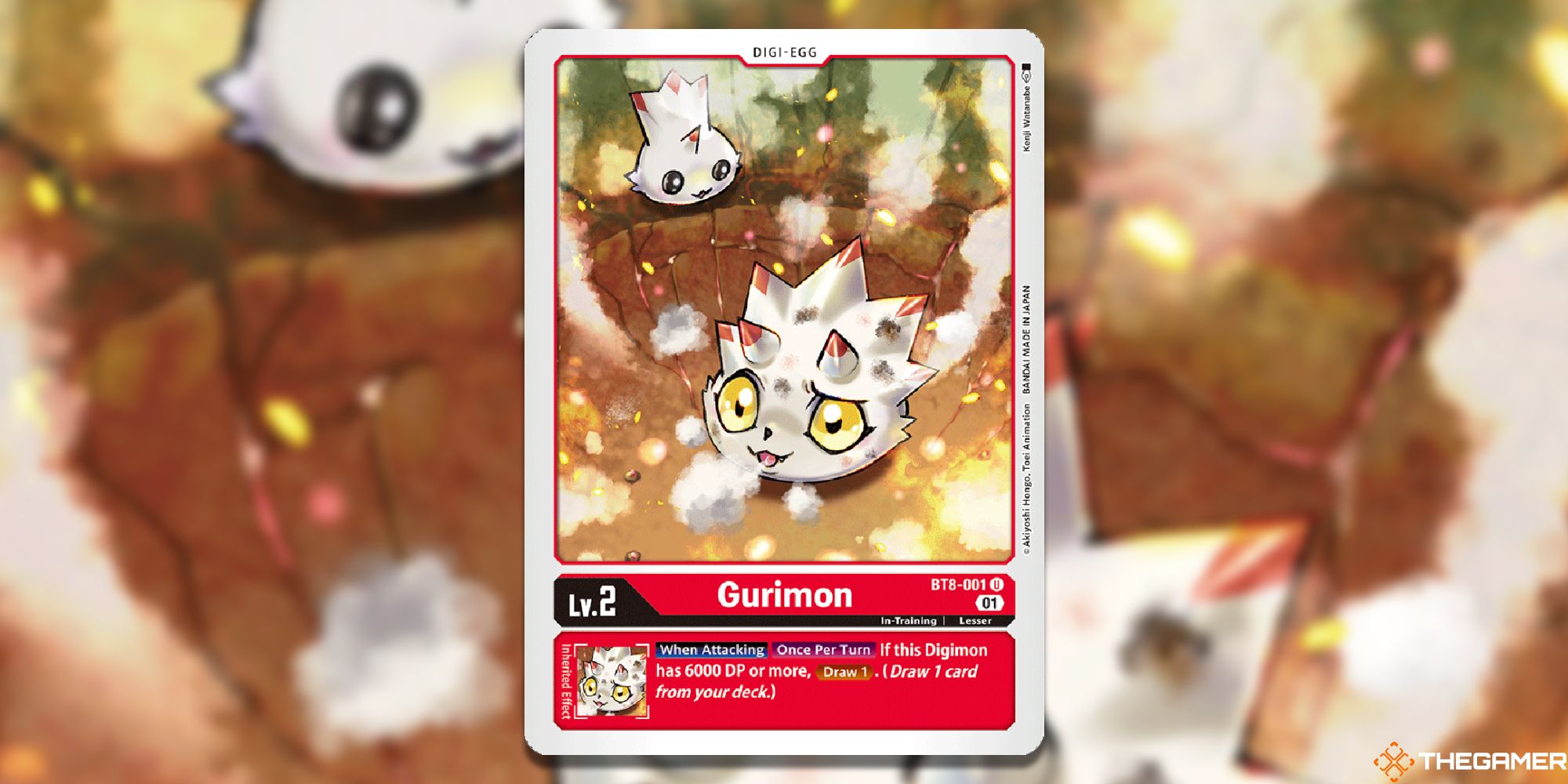 DigiEgg cards tend to be not as impactful as other cards. They usually only give the decks a small consistency boost, and most DigiEgg cards that were used up to Gurimon's release were in-archetype cards rather than generic effects. Gurimon changed this by giving red cards more draw power.

Card draw was one of the biggest problems with the color Red in the Digimon Card Game. With Gurimon, most red decks can start building up with hands a bit faster with how aggressive they can be. 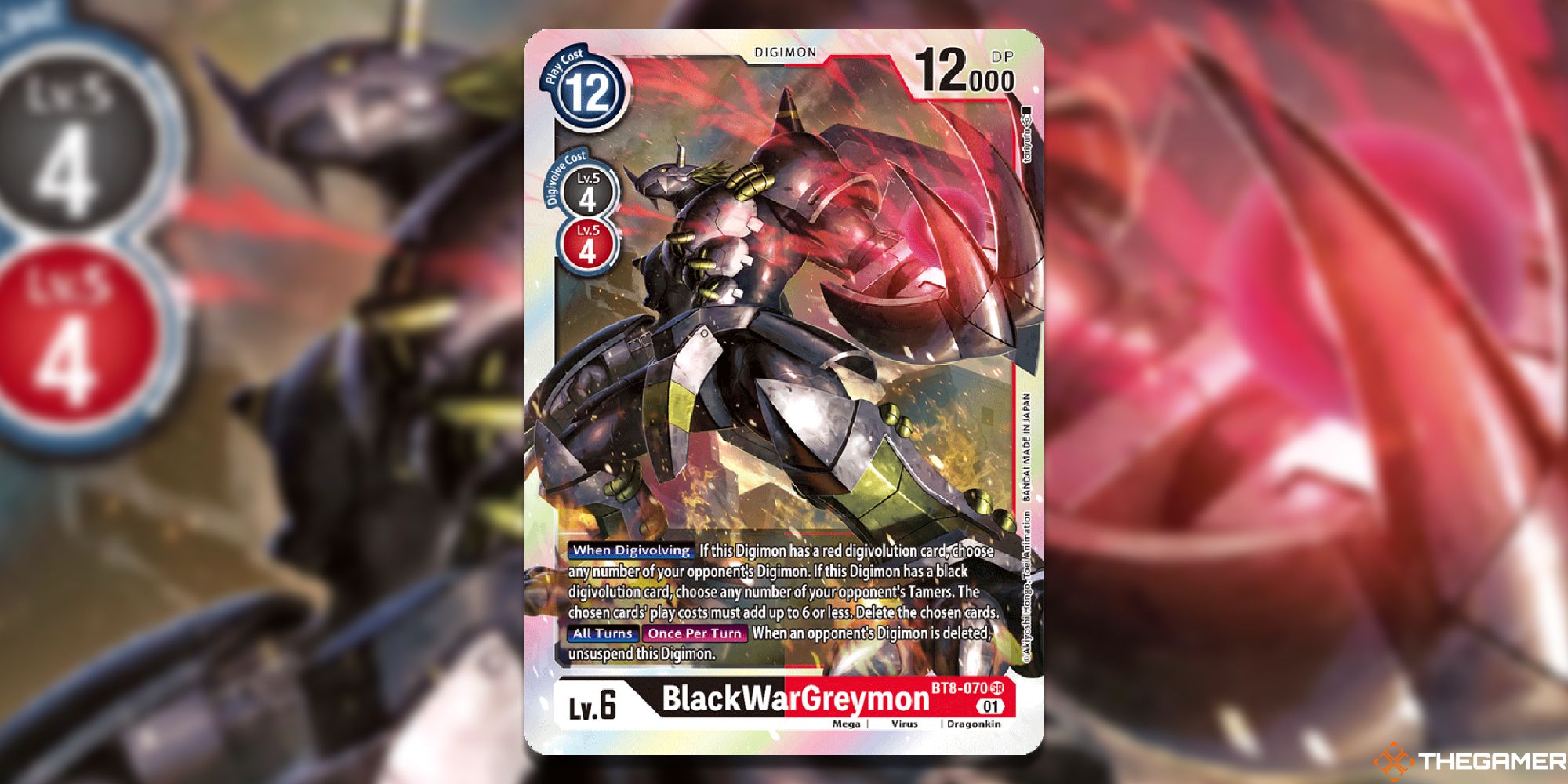 With the introduction and the long reign of Hybrid decks, Tamer removal became an essential tool players clamored for during BT-08. BlackWarGreymon was introduced and was anticipated to be one of the best decks in the format, with its ability to delete up to three low-cost Tamers. With Bandai's hit to Tommy Himi in the Limited list, BlackWarGreymon was suddenly not as important.

Besides the top end, the deck was a bit slow in nature, and its built-in inheritable effects did not have much of an impact on the meta-game. BlackWarGreymon's power is still huge in the grand scope of the Digimon Card Game and will only get better as new support like Gaiomon and BWG X-Antibody are added to its arsenal. 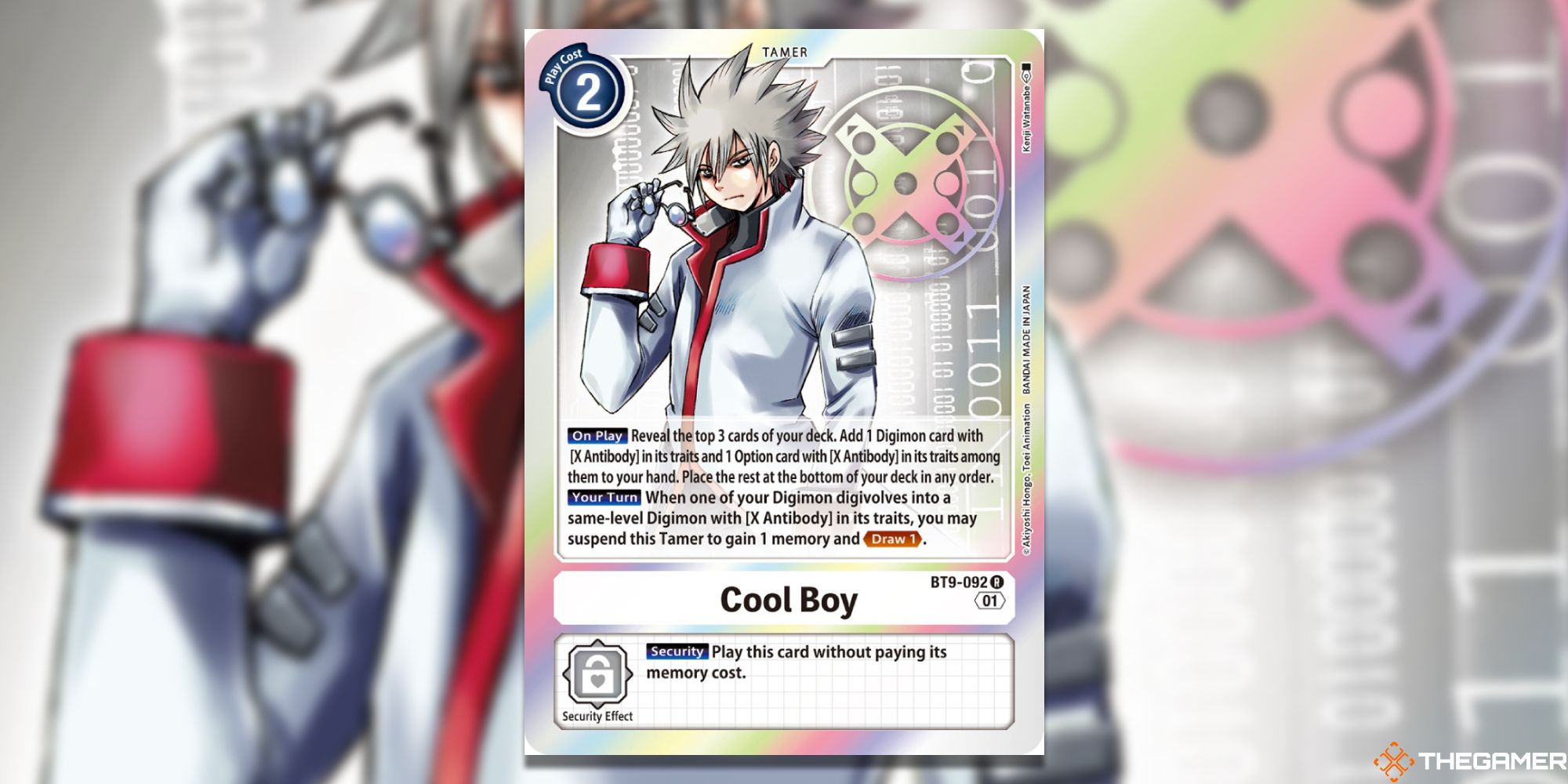 One of the best things introduced in BT-09 was the X Antibody archetype, but it was not like most archetypes where it was limited to a specific color. Instead, X Antibody became a different version for already established decks like Greymon and Garurumon and even gave new tools to the Alphamon deck.

Cool Boy makes all the X Antibody decks even stronger by utilizing their gimmick of being able to Digivolve into the same level Digimon to give you one memory and an extra card in hard. That, combined with Cool Boy being a low-cost searcher for any card with X Antibody in its traits, makes it a must-have card for any X Antibody deck. 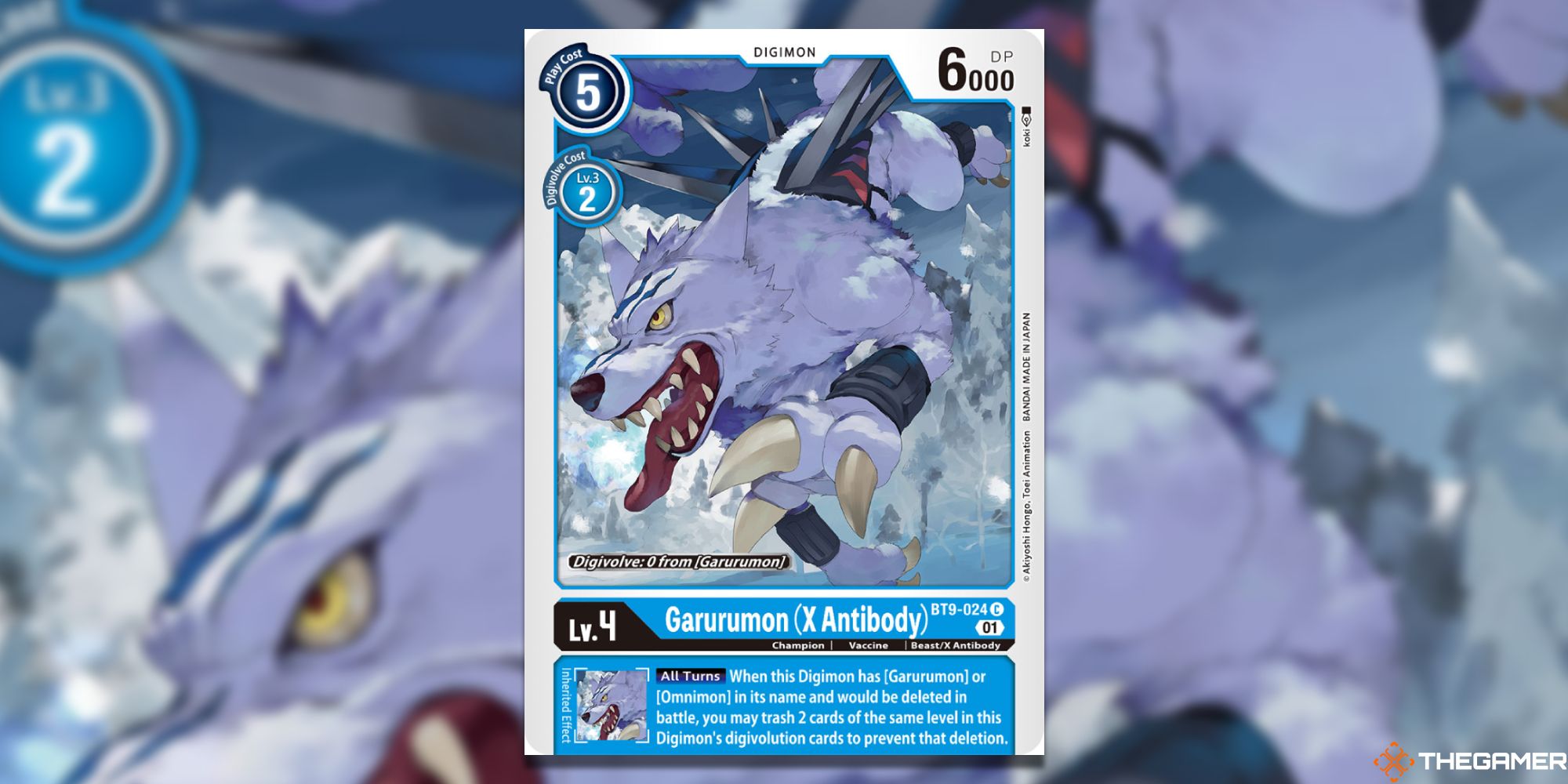 The Garurumon Tribal deck never made any waves in the Digimon Card Game until the X Antibody archetype was introduced. Garurumon (X Antibody) can give a stack battle protection up to three times. This effect, combined with Blue's giant spread of cards to let your Digimon unsuspend multiple times, made Garurumon one of the best OTK decks in its format.

Blue is one of the most consistent colors in the Digimon Card Game. And unlike most of the OTK decks in the game, Garurumon was fast and very hard to stop. 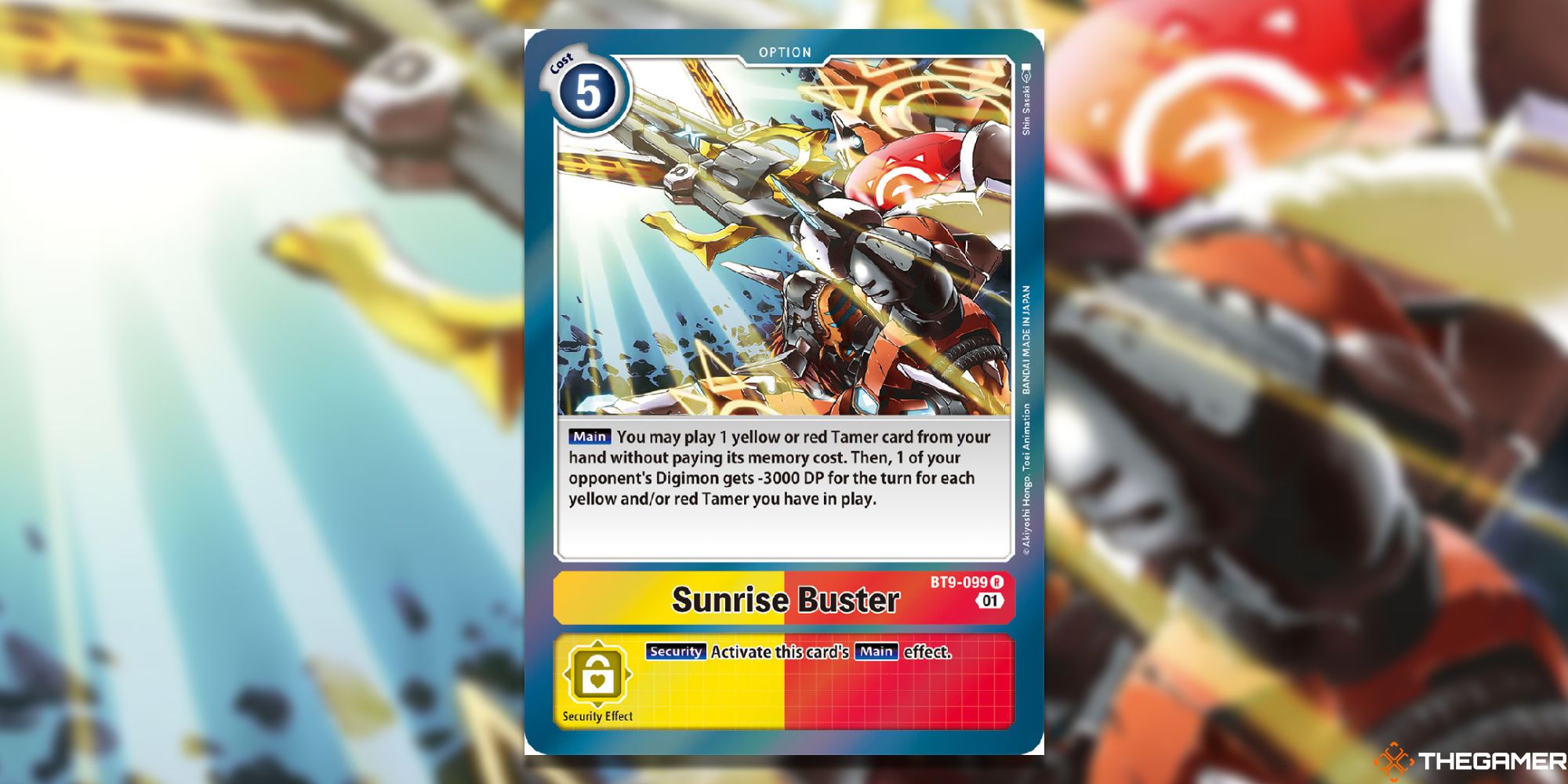 DP reduction effects are some of the most powerful deletion tools in the Digimon Card Game. Not only do they dodge most deletion protection effects, but they can also get around the Armor Purge mechanic by deleting the Digimon once it has reverted to its previous form. Sunrise Buster takes these effects to the next level.

While at first, reducing a Digimon's DP by 3,000 might not seem that great of a deal, its effect of playing out a Tamer for free and then raising the amount of DP reduced by 3,000 for every Red and Yellow Tamer makes it the best removal card for each of those colors. This card can clear most Mega Digimon with only four Tamers in play. 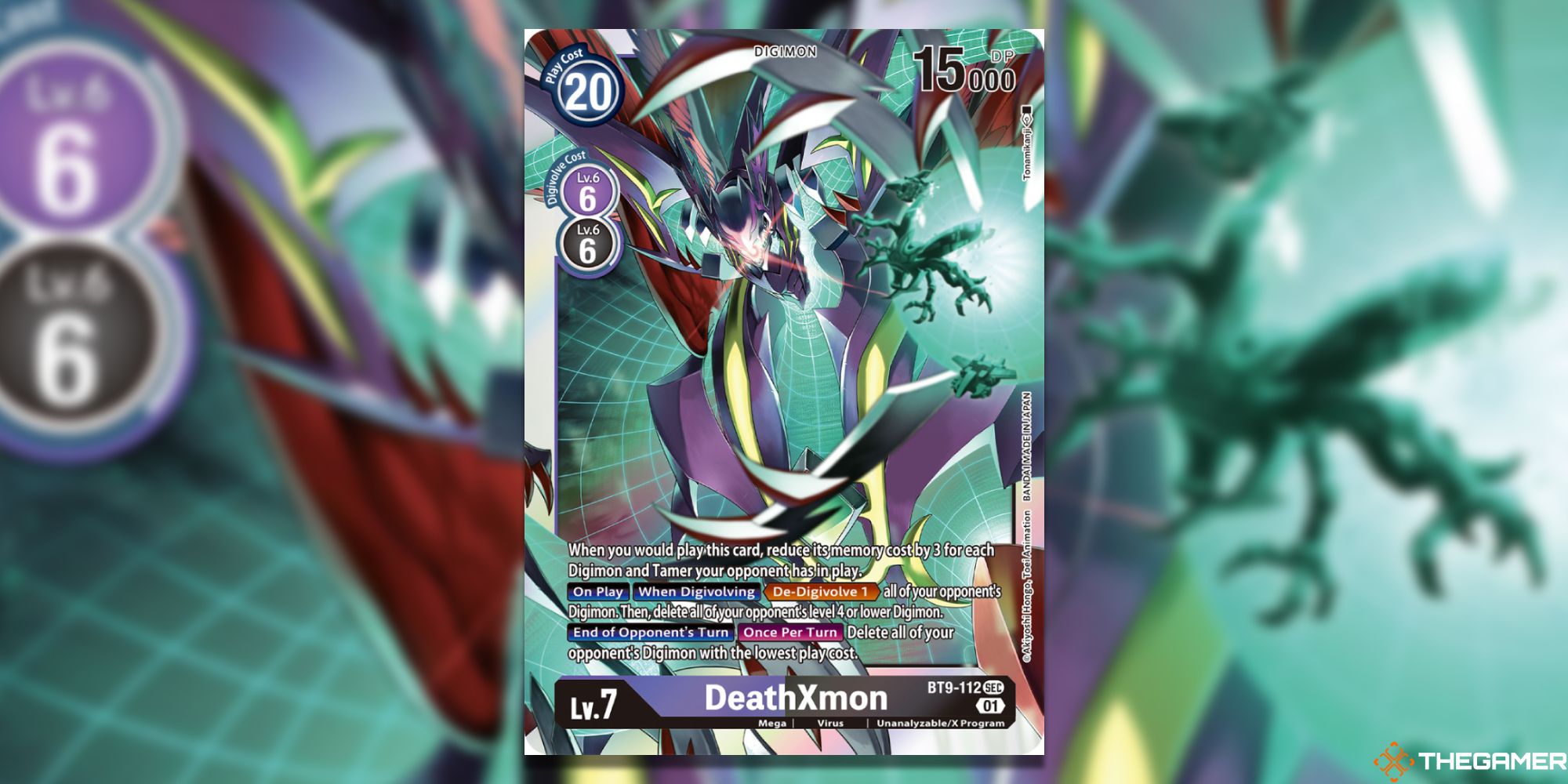 If there was ever a staple card in the Digimon Card Game, it would be DeathXmon. Its introduction in the game was a monumental shift on how the game was played. DeathXmon's high base DP plus its punishing effects once it hits the play area and remains there, made a lot of decks borderline unplayable.

Any deck that plays out multiple Digimon always had to keep its eyes open for a sudden DeathXmon play. 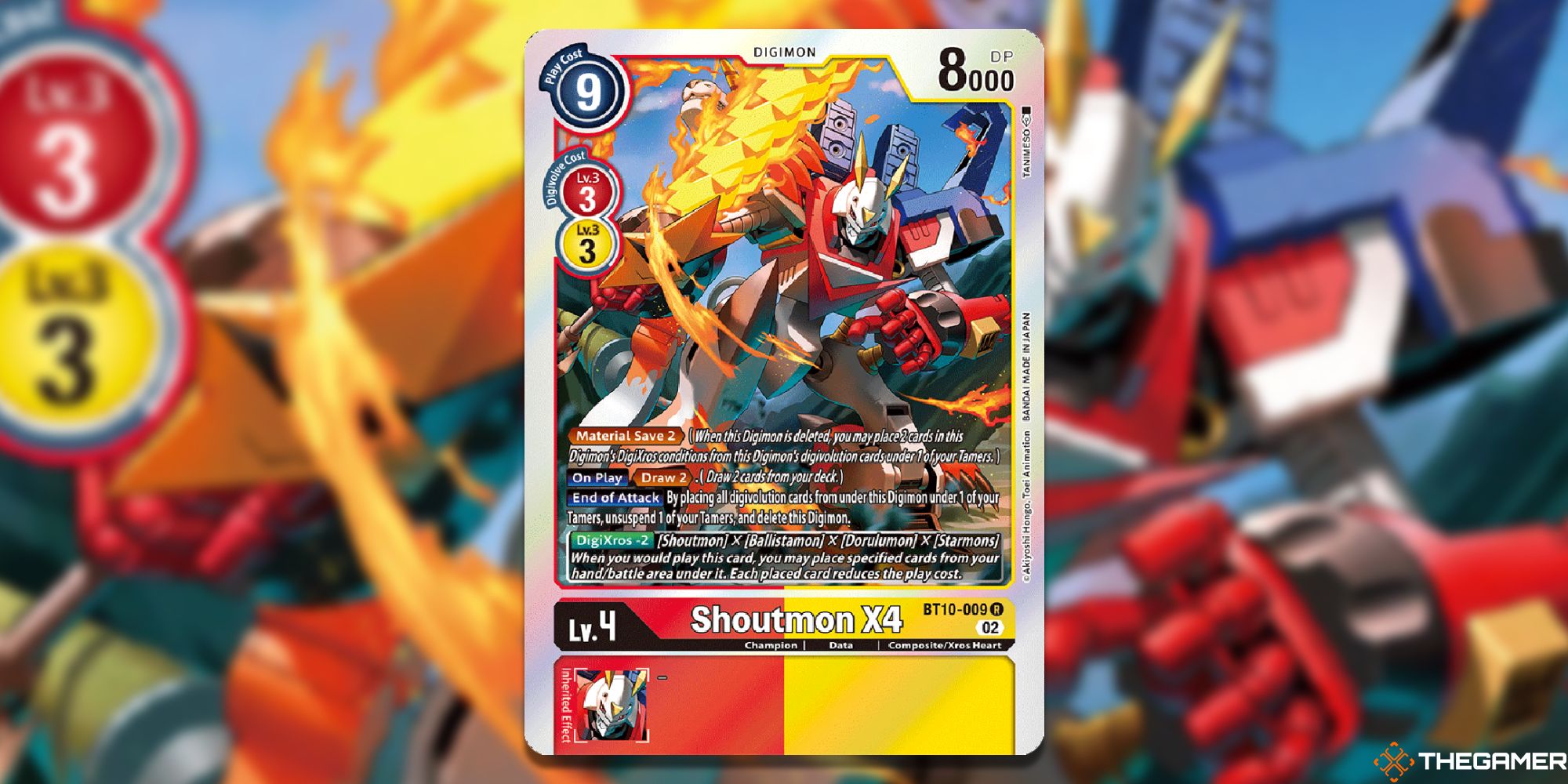 Shoutmon X4 plainly reads like a strong card. Draw two. DigiXros to reduce its cost to be played out for one memory. Combined with its DigiXros inheritables, Shoutmon can gain Piercing, Rush, another draw, and reduce security Digimon's DP to ensure that it sticks long enough for its end-of-attack effect to recycle its material and do it all over again.

Some might call Shoutmon X4 the Boogieman of the BT-10 format. As soon as the Xros Heart cards were revealed in the Japanese version of the Digimon Card Game, players around the world trembled at the thought of having to deal with such a powerful card like Shoutmon X4 for multiple formats. Luckily, Bandai restricted it to one per deck soon after its global release.