There are many different archetypes and gameplay styles spanning the deep roster of DNF Duel, ranging from Zoners to Rushdown Fighters to Puppeteers. However, one of the most unique of the bunch in the Lockdown Characters, who thrive at keeping their opponent stuck in place, giving themselves ample time to strike when the time is right.

Inquisitor is one such Lockdown Character in DNF Duel, who uses her massive, flaming wheel of death to halt her opponent's movement and keep them locked in place. This allows her to swiftly follow up with a handful of attacks that can catch her target off guard or force their hand into stepping outside their comfort zone, making Inquisitor one of DNF Duels' most fascinating and robust characters.

Want to know more about the character before jumping into this guide? Check out Inquisitor's Command List here for a taste of what she can do! 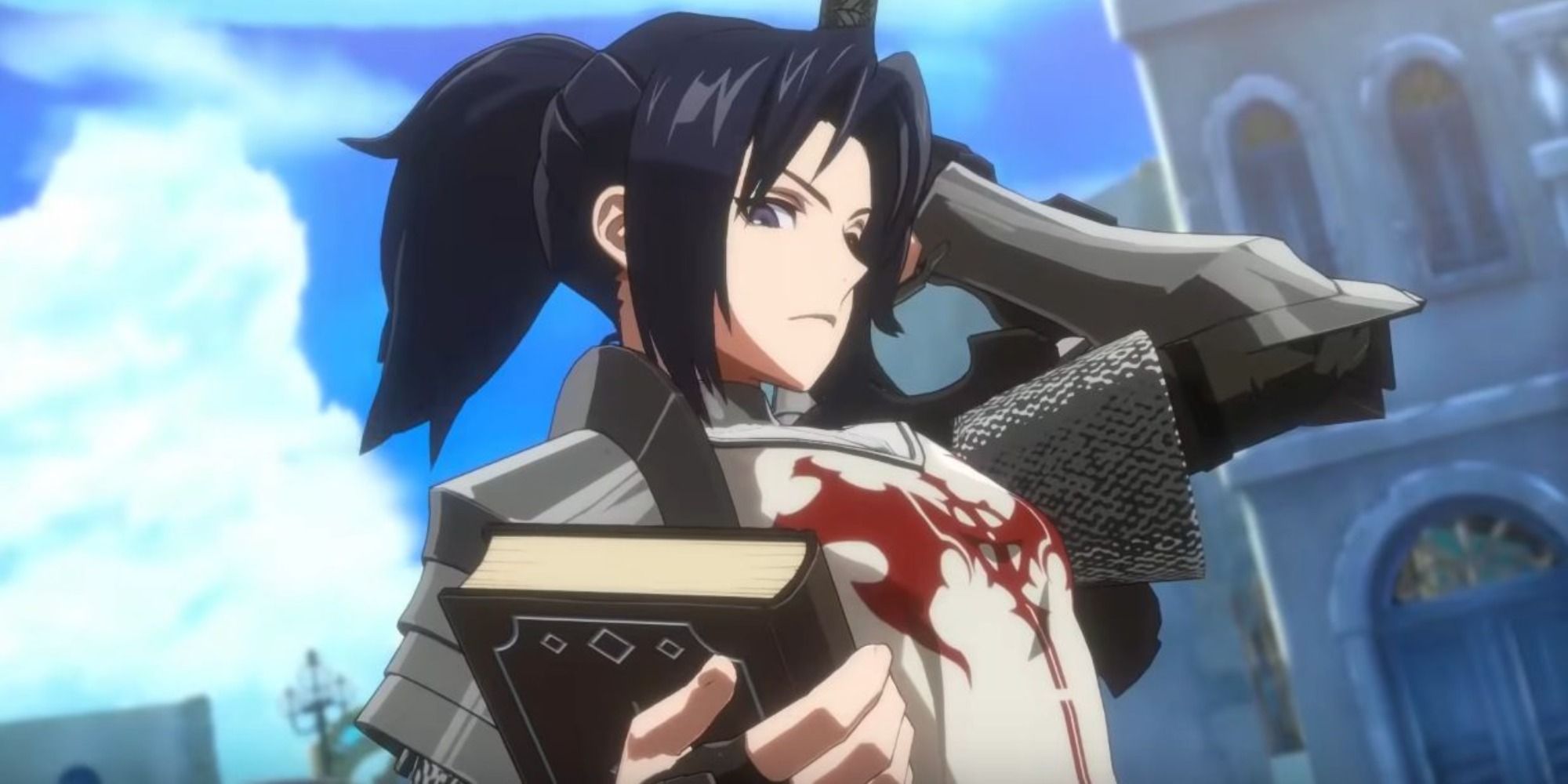 Despite her Lockdown and Trapper playstyle, Inquisitor's gameplay is often very aggressive and punishing, making her exceptionally hard to match up against for characters who rely on getting in on their opponent. Inquisitor's Burning Wheel allows her to control spacing and time, enabling her to move in for a high/low mixup or a throw on opponents who continue blocking after the fact. Almost every Special Move at her disposal allows her to keep her opponent in check, feeding into her win condition and strategy.

While the idea of playing a Lockdown or Trapper character may be daunting, Inquisitor is far and away one of the more accessible ones in the genre. She is an excellent gateway character into the roles as her basic kit allows you to learn the basic strategy and setups these characters need to thrive. Furthermore, Inquisitor leans towards a more aggressive playstyle, so her offensive game is solid. Whether you're a beginner to the genre or archetype, we suspect Inquisitor won't give you too much trouble!

If you happen to be a newcomer to the genre or just snagged DNF Duel and are unfamiliar with its systems and mechanics yet, please take this time to review the expandable table below. You will find all of the game's common inputs, terminology, and notations below, which we will use quite frequently when detailing Inquisitor's Special Moves and MP Special Moves. 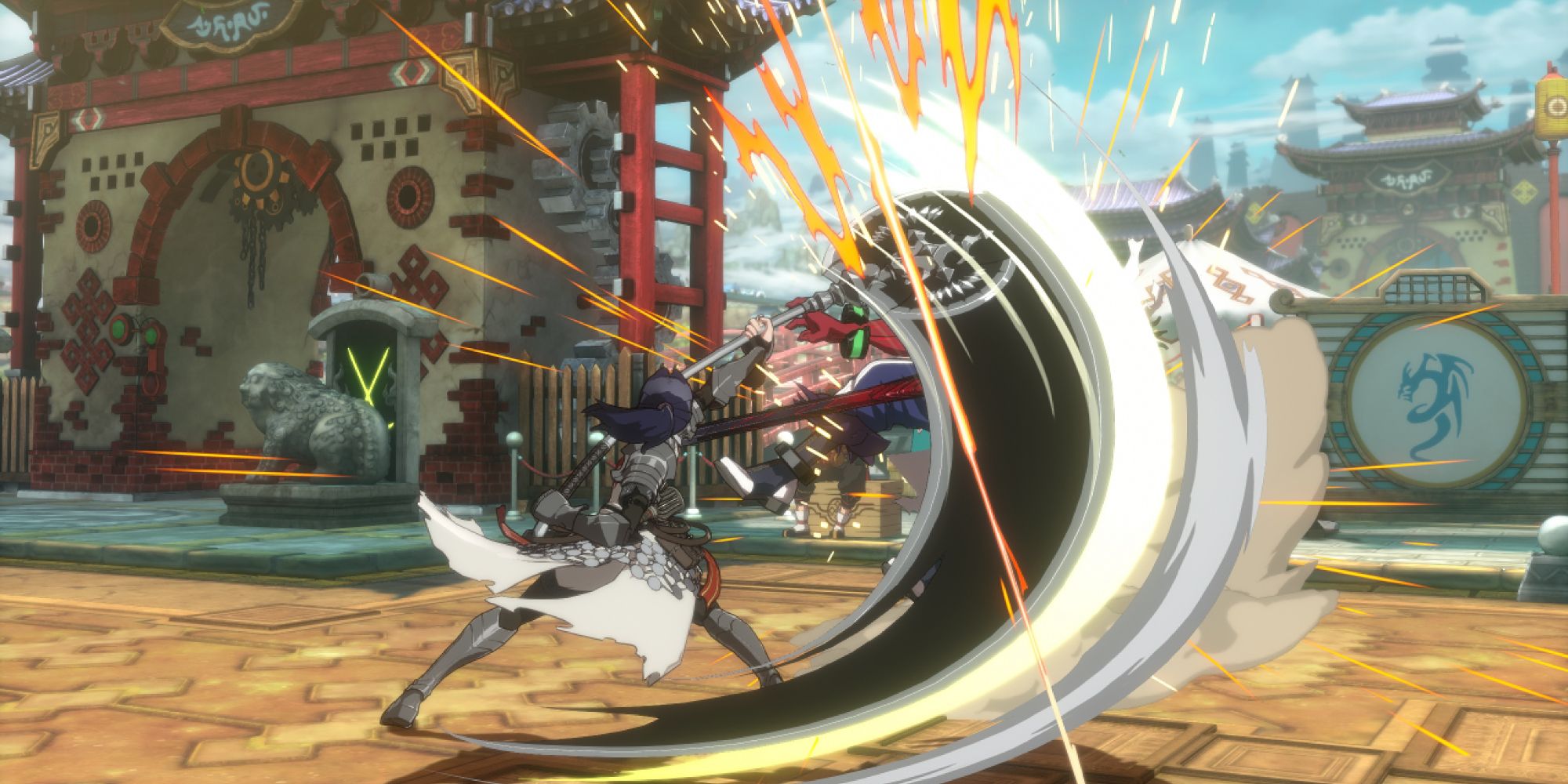 Special Moves (Skills) are resourceless 'Heavy Attacks' that enable every character to execute powerful actions without having to sacrifice their Mana or other properties. At least, for the vast majority of the cast. For most characters, attack strings follow the 'Ascending Order' pattern, meaning A chains into B, B chains into S (Skills), and S chains into MS (Mana Skills).

Skills, as shown above, are almost always used as a pathway to your Mana Skills, which are much stronger attacks that often end or extend combos further but require a resource to use. We will touch more on Mana Skills later but will now focus on Inquisitor's normal Skills, as they are crucial to her playstyle. 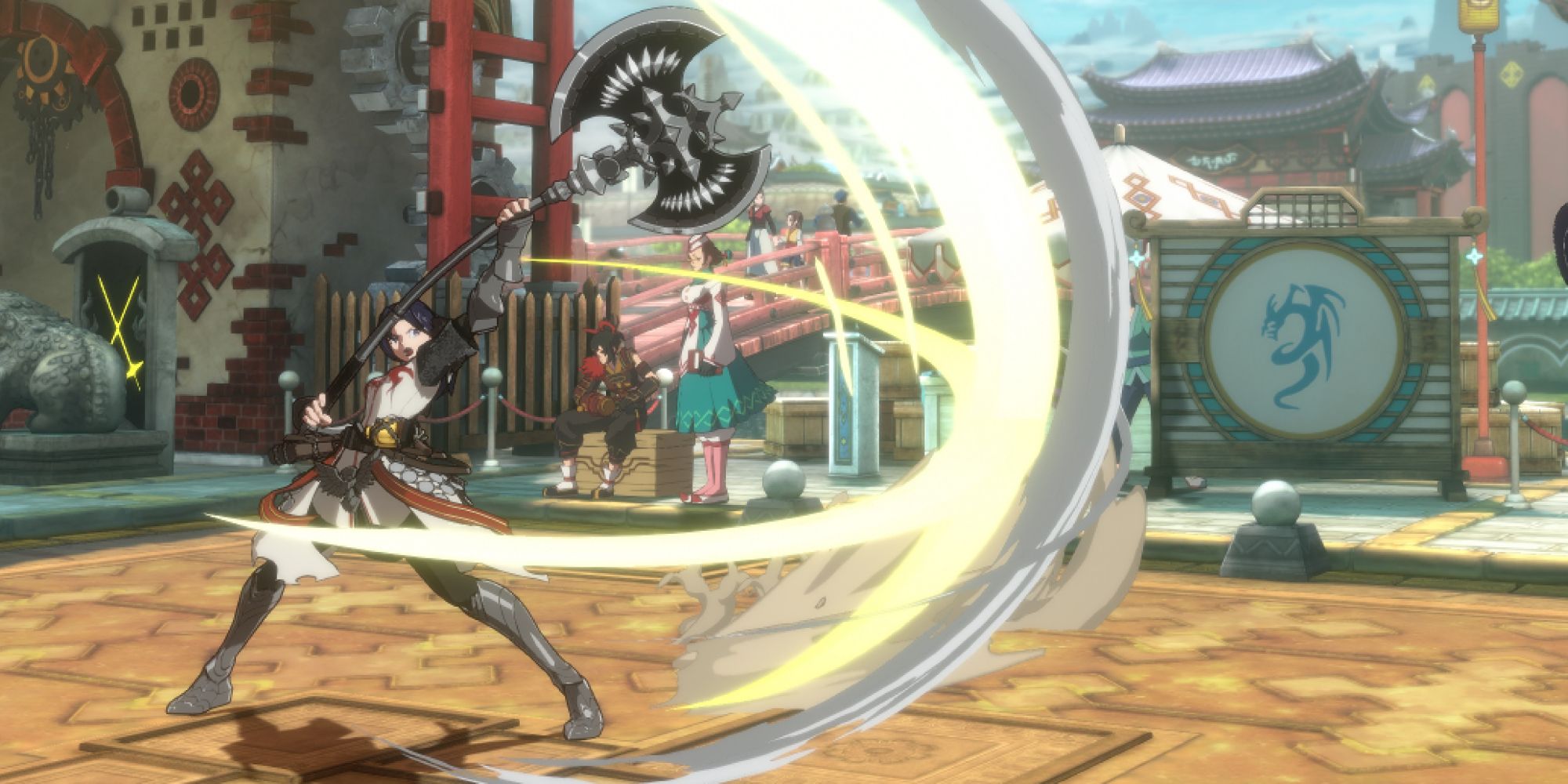 Inquisitor swings her battleaxe horizontally in front of her, then immediately vertically, creating a cross. Punishing Cross is her 5S action and is often the follow-up to any of her hit confirms, leading to combos. Punishing Cross can cancel into Cut-in Dash, Flege's Essence, or any of her Mana Skills. 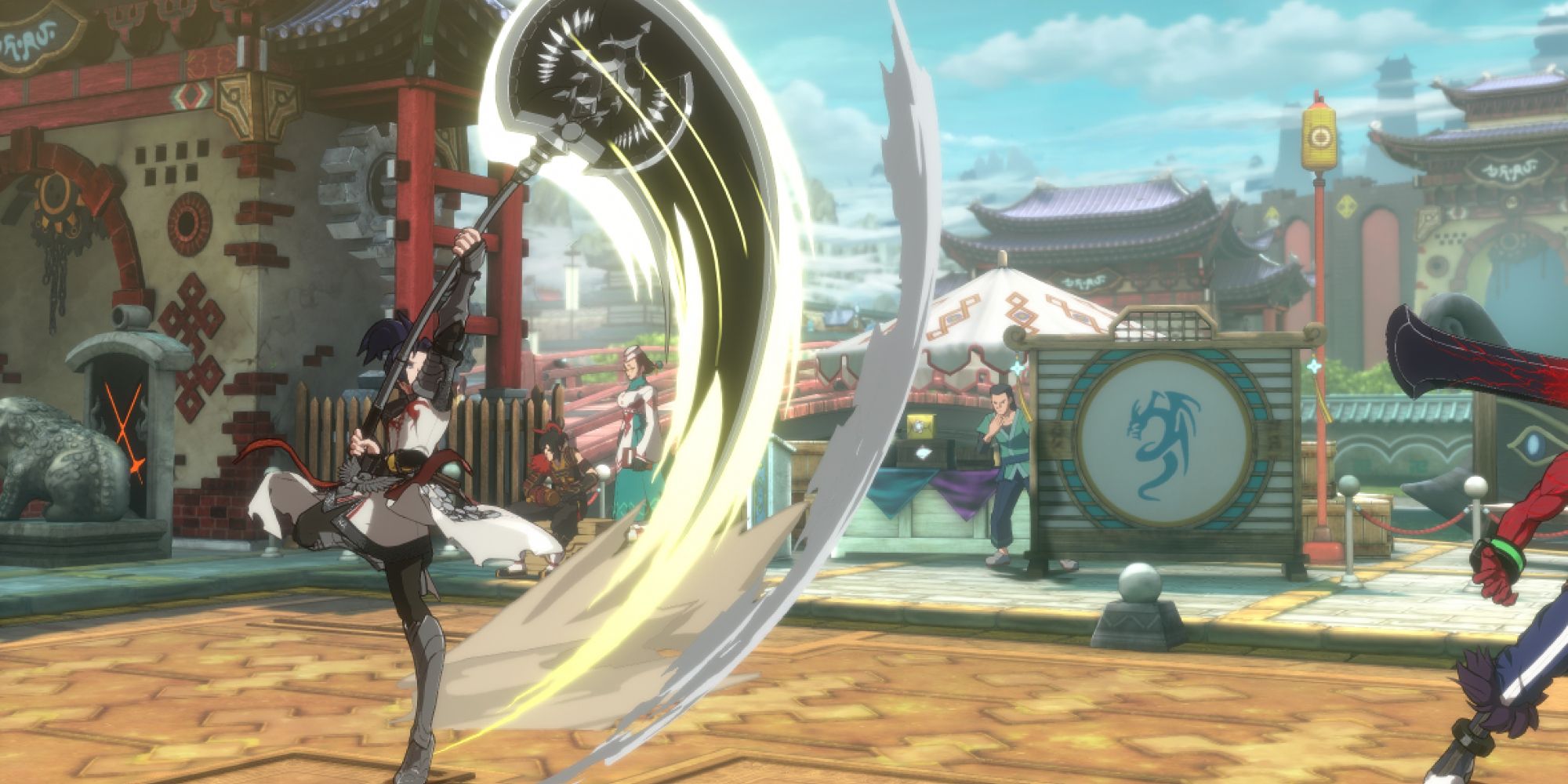 Rising Cut has Inquisitor swing her battleaxe high into the air vertically, making for an excellent anti-air or combo extender. Rising Cut can cancel into Cut-in Dash, Flege's Essence, and all of her Mana Skills. This is also Inquisitor's 2S attack. 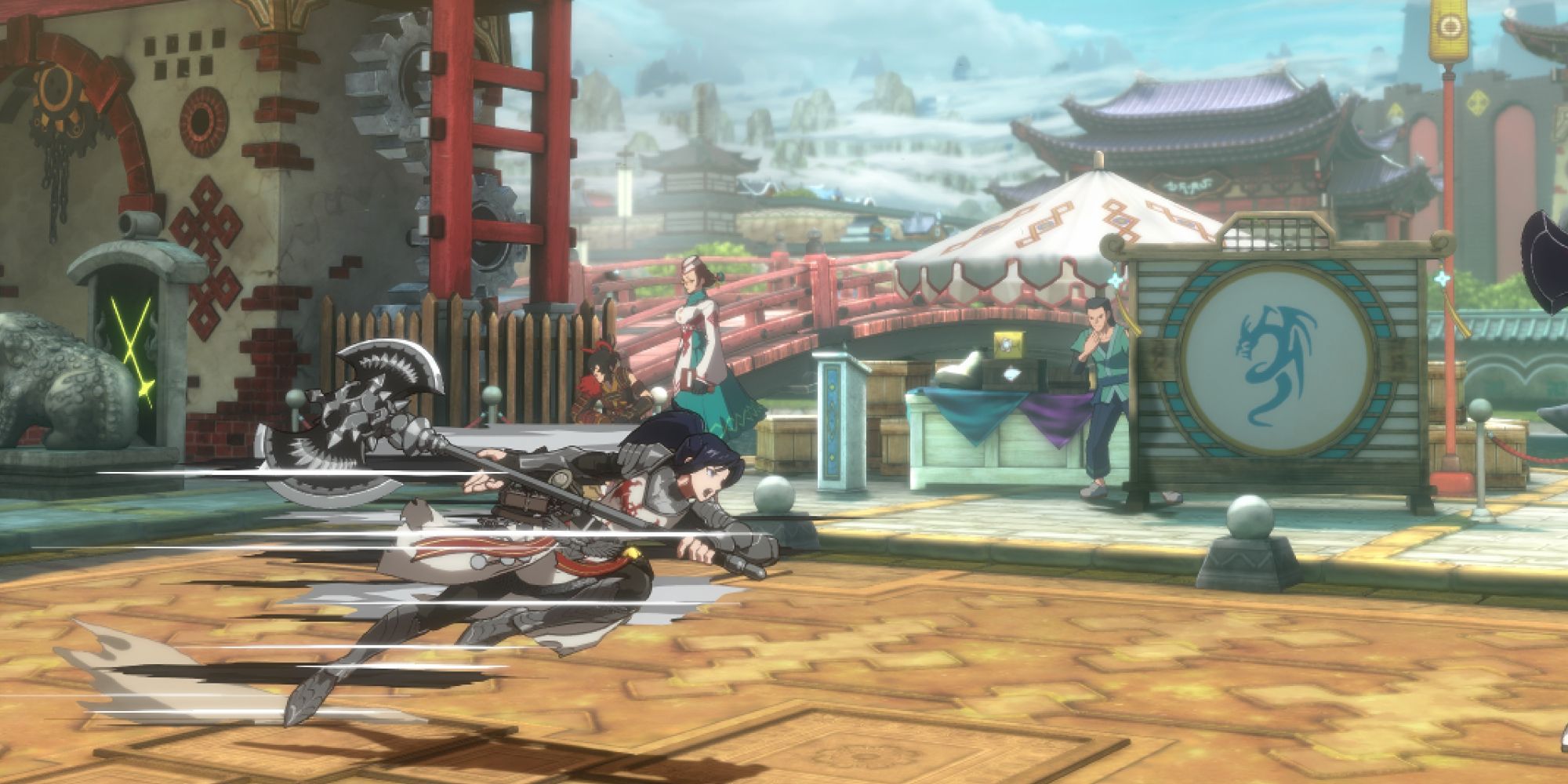 Cut-in Dash is Inquisitor's 6S action and has her swiftly rush forward with a low profile. Not only does Cut-in Dash unlock the ability to perform Cut-in Dash, but it's a surprisingly useful tool for resetting pressure, approaching targets, and extending combos. While you can pass through opponents if you're close enough, Cut-in Dash lacks the invincibility frames your Roll has, making it punishable by savvy opponents. This Skill is often used after landing Noble Rage, allowing Inquisitor to cross her target up and avoid wake-up reversal options. 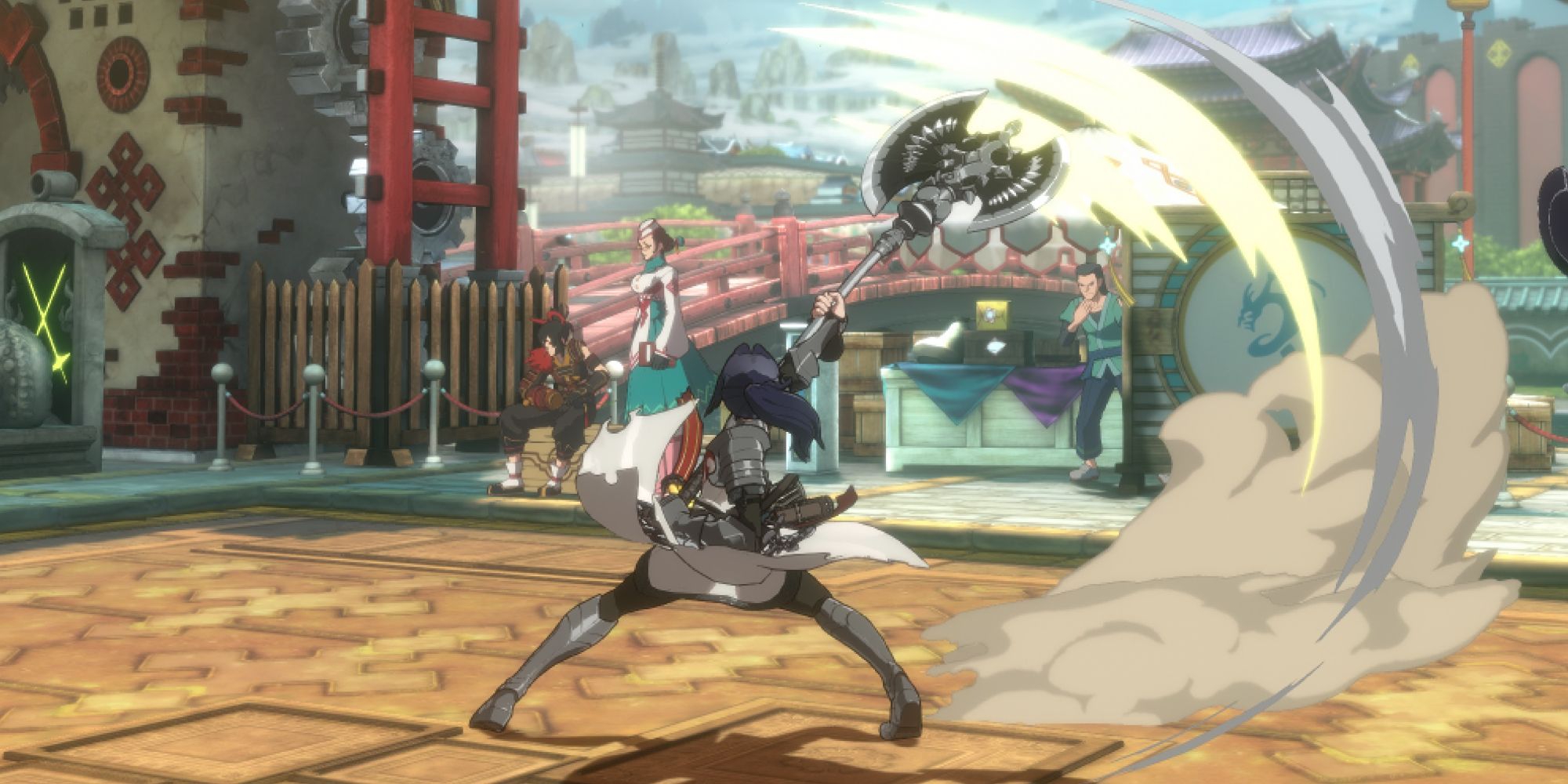 Due to Cut-in Bash being an extension of Cut-in Dash, it's performed with the 6SS input and has Inquisitor perform a swift strike with her great axe that covers a wide vertical range. On hit, Cut-in Bash can cancel into a jump and lead to corner carries depending on the situation. Cut-in Bash is typically used as combo filler, counterpoking, and to catch airborne opponents off guard. 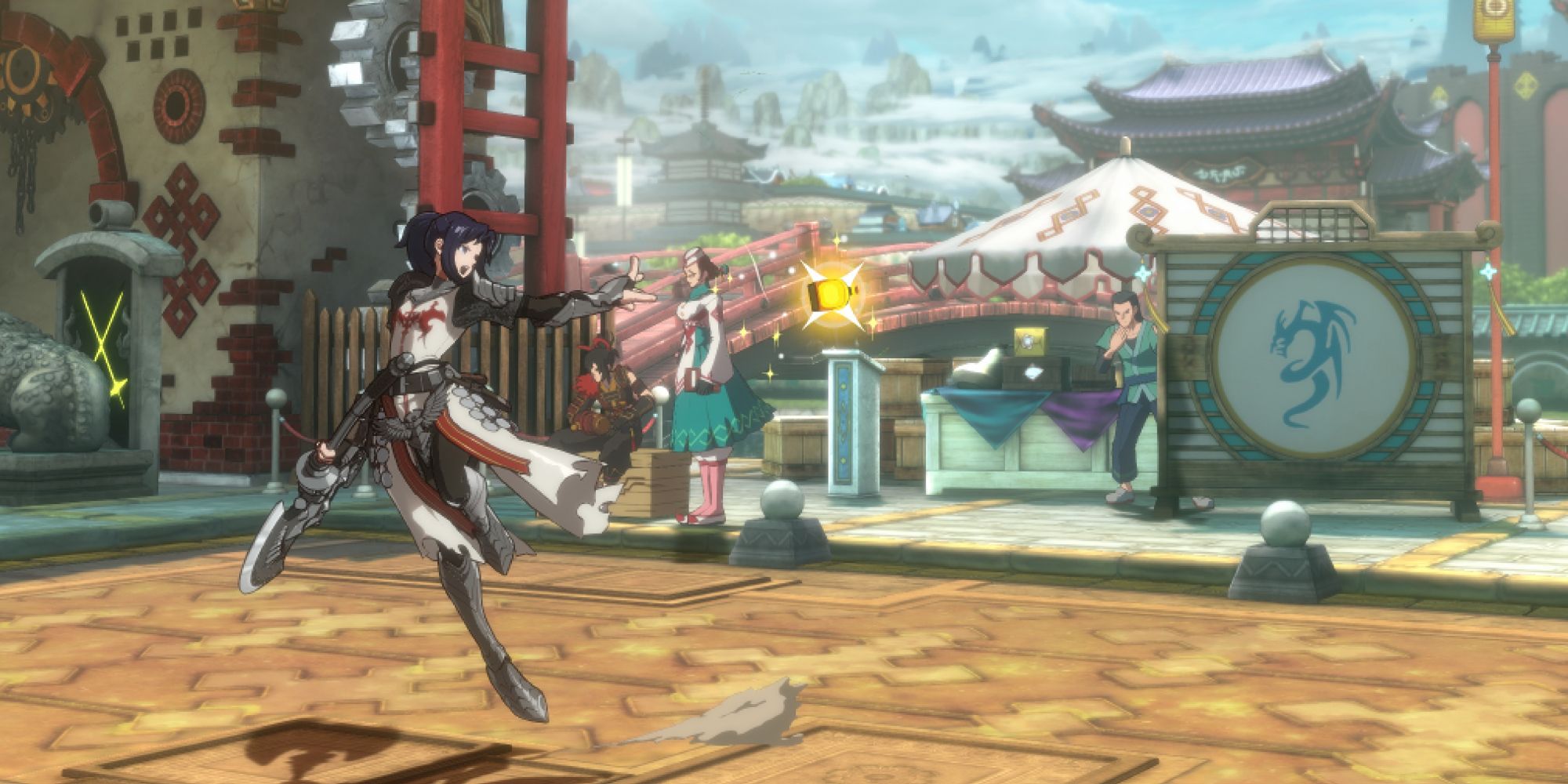 Inquisitor leaps backward and tosses out a vial of Flege's Essence, which will apply the 'Essence' debuff on her opponent for seven seconds on hit. Essence makes Inquisitor's Mana Skills launch her target higher and farther than ever, enabling more combo routes and possibilities. This Skill is her 4S action and should be used as OTG filler or whenever you have the advantage, such as after using Punishing Cross or Raid. 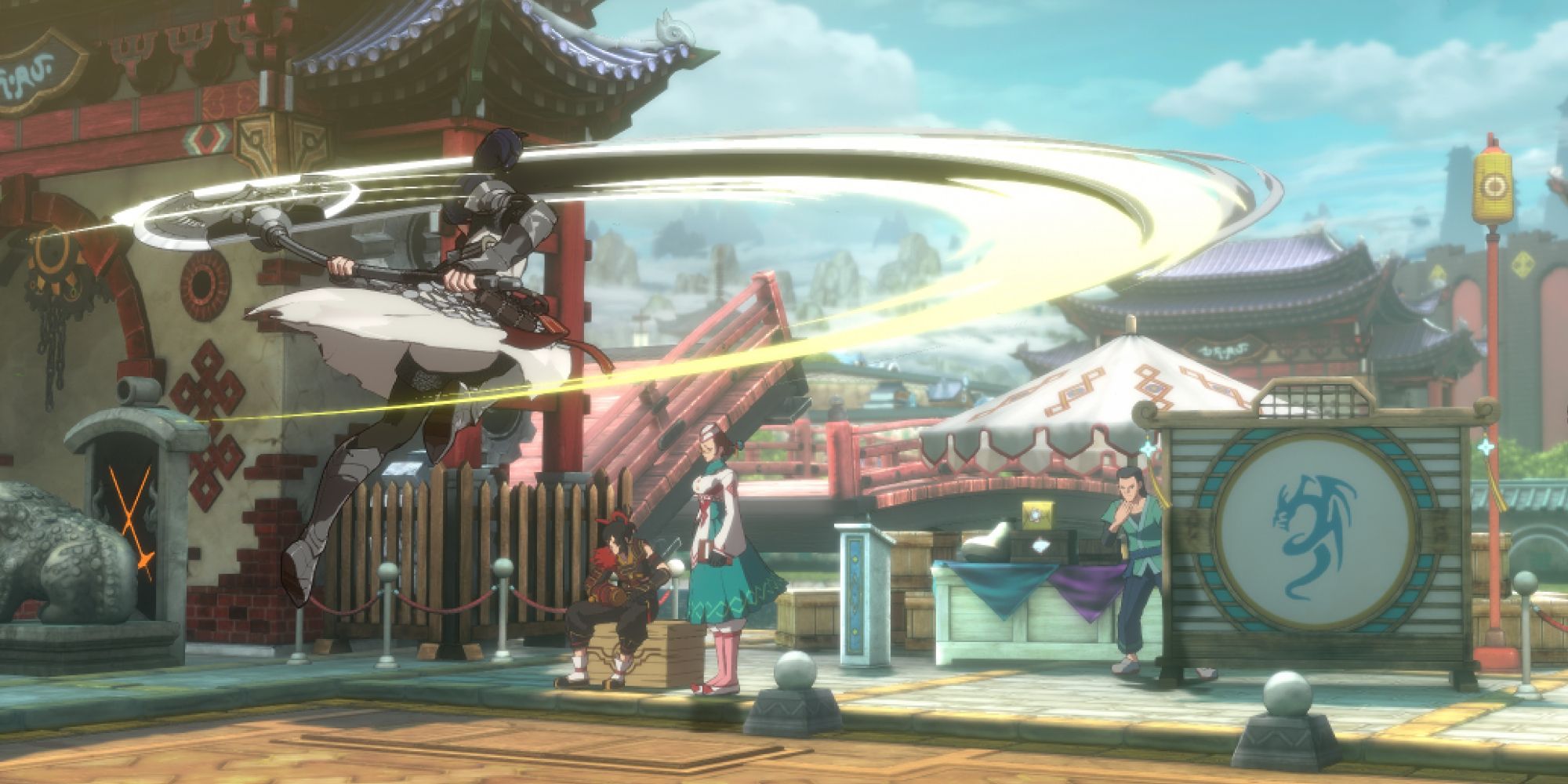 Punishment is one of Inquisitor's jumping specials performed with j.S. This Skill has Inquisitor perform several far-reaching strikes with her great axe while she spins through the air, covering a great distance. She will travel the entire stage length if she runs, jumps, and performs Punishment. Furthermore, following Punishment up with Cut-in Bash will lead to a combo. Additionally, Punishment can also cancel into Raid and God's Wrath. 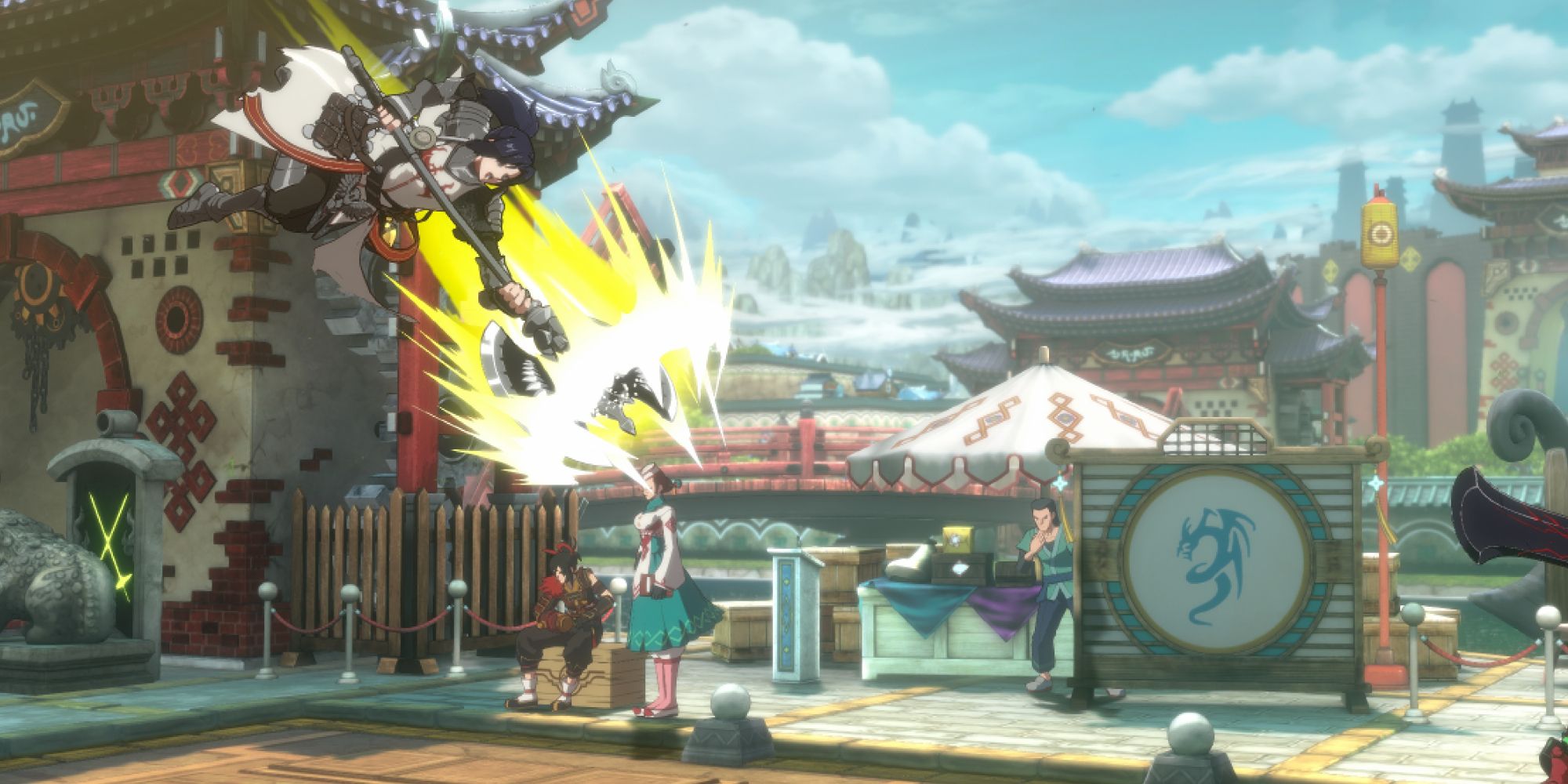 Raid is another of Inquisitor's jumping specials, performed via j.2S, which has her nosedive into the ground with her greataxe positioned in front. Inquisitor lands with incredible force, creating a shockwave on impact. This is Inquisitor's primary air-based combo extender. The first hit of Raid can cancel into God's Wrath, while the second hit can cancel into Fledge's Essence or any of her Mana Skills. 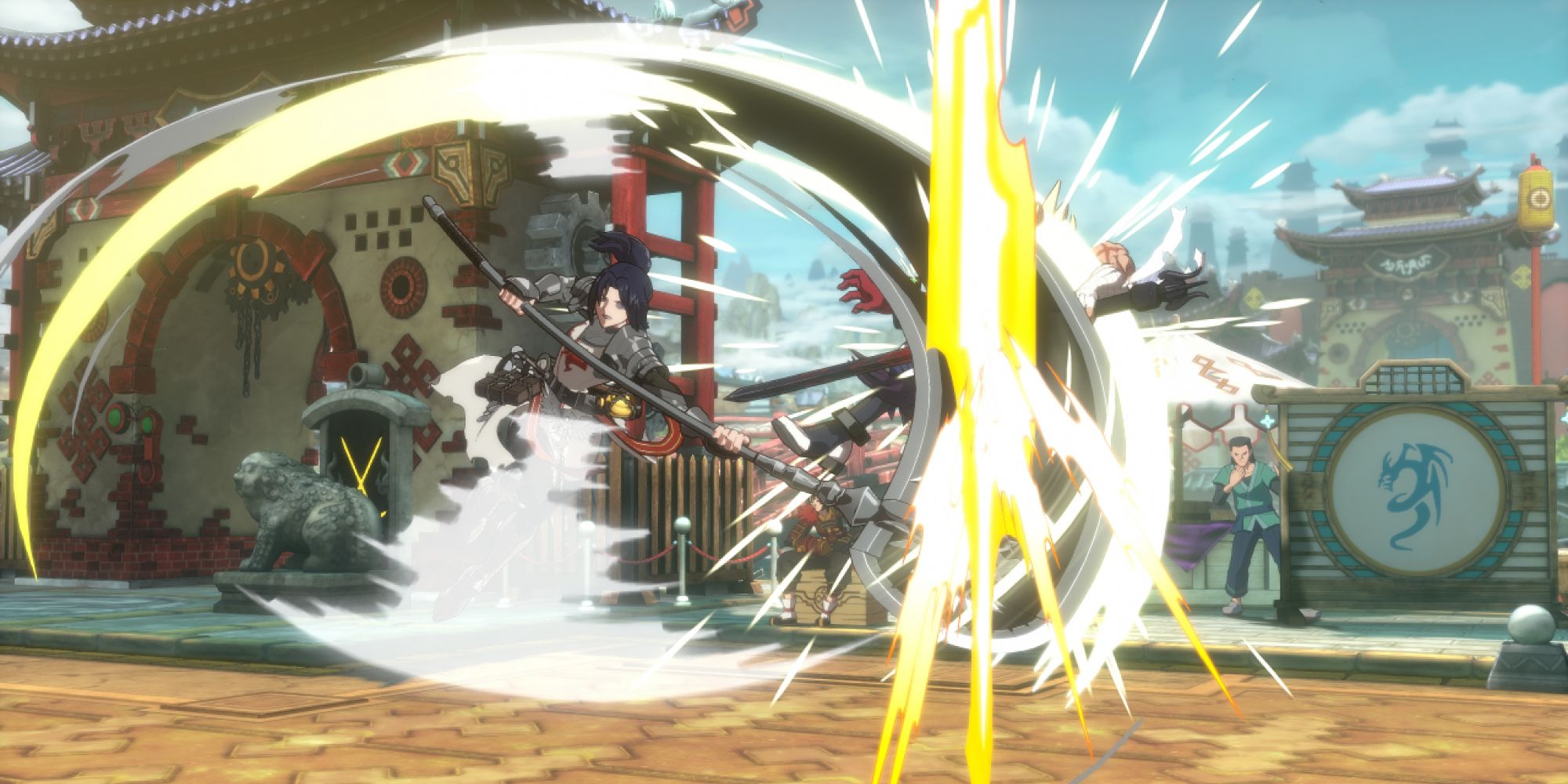 MP Special Moves (Mana Skills) are your enormous damage and ultra flashy attacks that typically extend or end your combo string. Mana Skills are the bloodline of every character, unlocking their true potential in combat, giving each of them unique actions and properties that allow them to execute their game plan and play their role.

Inquisitor's Mana Skills focus heavily on her overall strategy of Locking Down and Trapping her opponent, giving her things like towering Flaming Wheels, Firebombs, and far-reaching swipes with her great axe. She's a solid character with several powerful options at her disposal, and her Mana Skills perfectly showcase why. 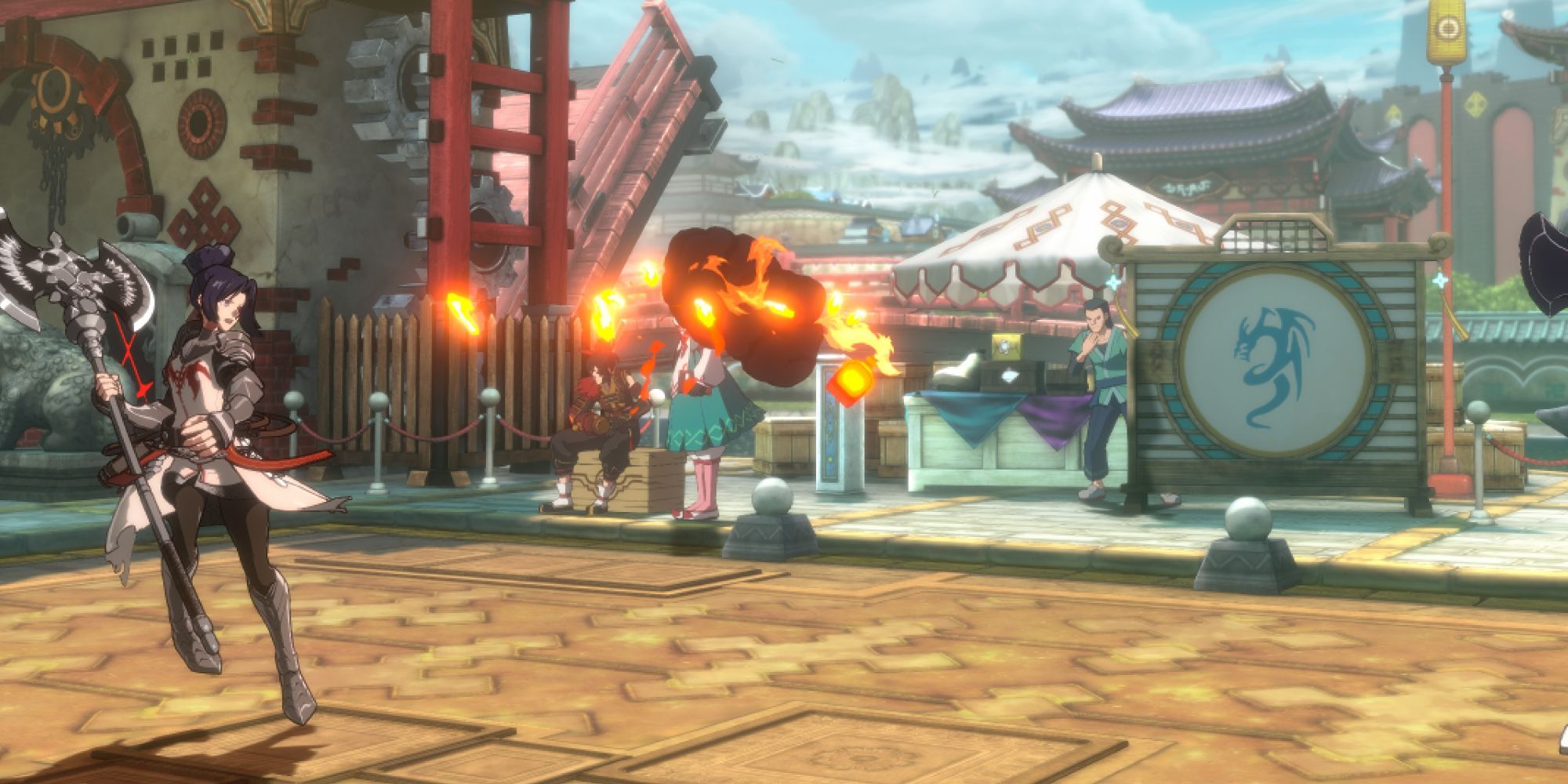 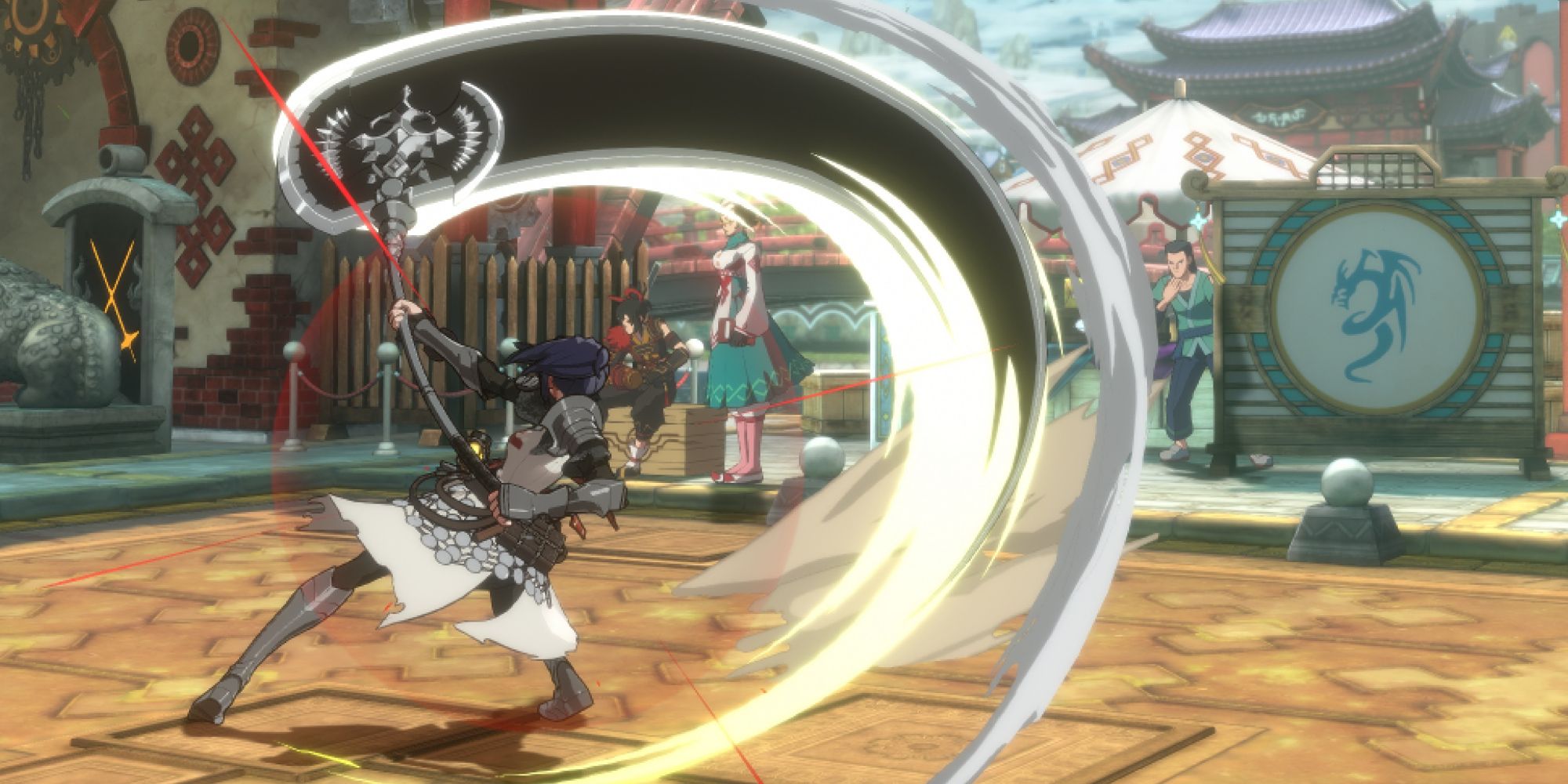 Noble Rage is Inquisitor's invincible reversal, making it an excellent anti-air option if you can spare the 80 MP cost. Noble Rage is a remarkable reversal and one of the best Dragon Punches in the game, as it can hit OTG, extend combos, and is a superb Okizeme option (applying pressure or mixups on an opponent waking up). Furthermore, if an opponent is inflicted with the Essence debuff, Noble Rage will incinerate them, offering even more damage and combo potential.

If you want your Mana Gauge to refill slightly faster, some of your Mana Skills can be executed using Motion Inputs. While the 'simple input' option still exists, your Mana will regenerate slightly slower if you use it. Noble Rage is one of these Mana Skills that can be inputted with either 2MS or 623MS (⭢⭣⭨MS). 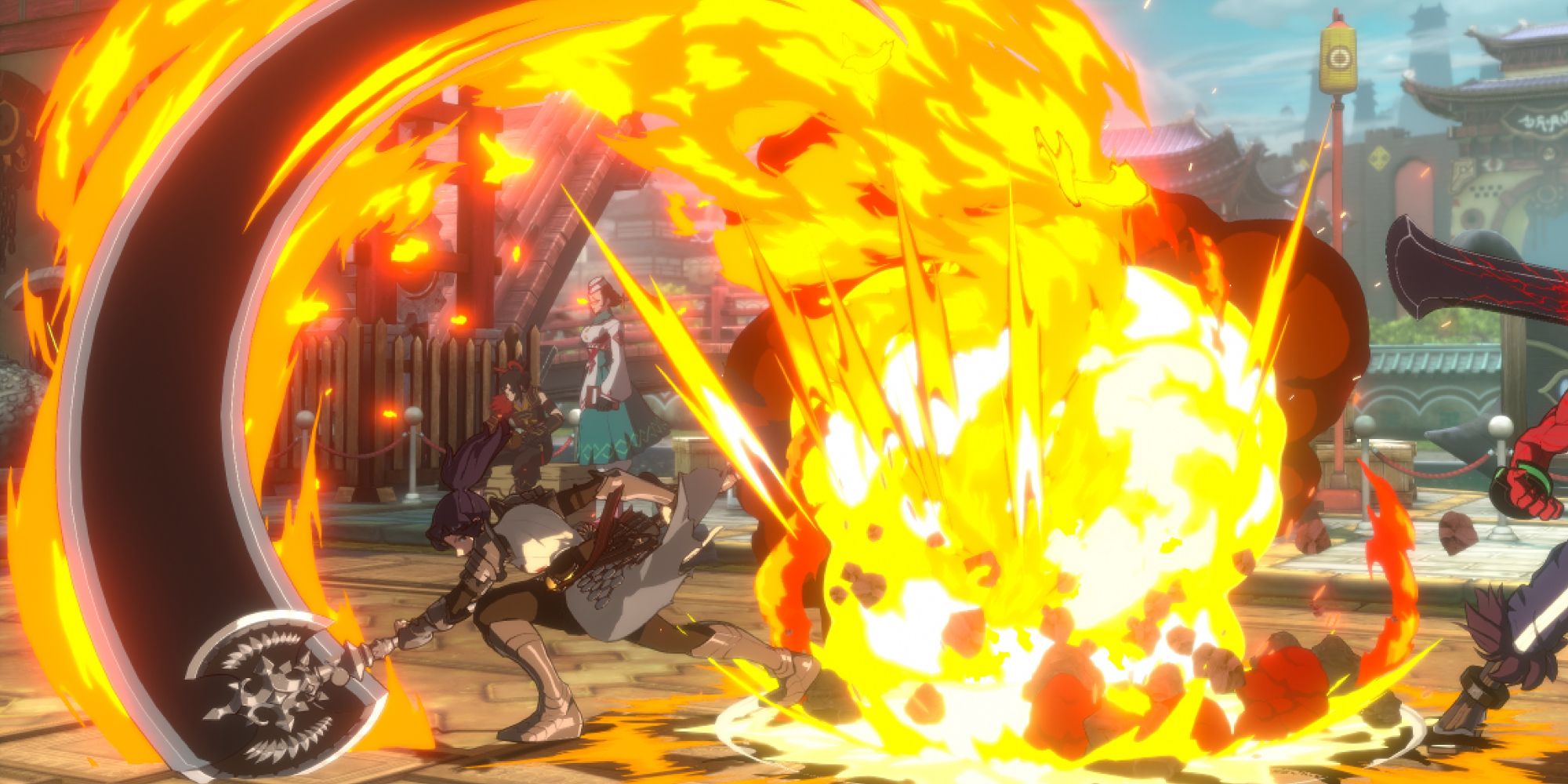 Summary Justice is an odd Mana Skill of Inquisitor's and is primarily used as a way to close out combos or end pressure. Using Summary Justice after Punishing Cross makes for an excellent frametrap and gives Inquisitor much-needed space to maintain pressure and continue her opposition. Similarly, Summary Justice can be used after Raid to make the move safe and get your turn back, but you will have to be okay with spending 50 MP. And lastly, if an opponent is inflicted with the Essence debuff, Summary Justice will incinerate them, giving you a chance to extend combos and deal damage.

If you want your Mana Gauge to refill slightly faster, some of your Mana Skills can be executed using Motion Inputs. While the 'simple input' option still exists, your Mana will regenerate slightly slower if you use it. Noble Rage is one of these Mana Skills that can be inputted with either 6MS or 236MS (⭣⭨⭢MS). 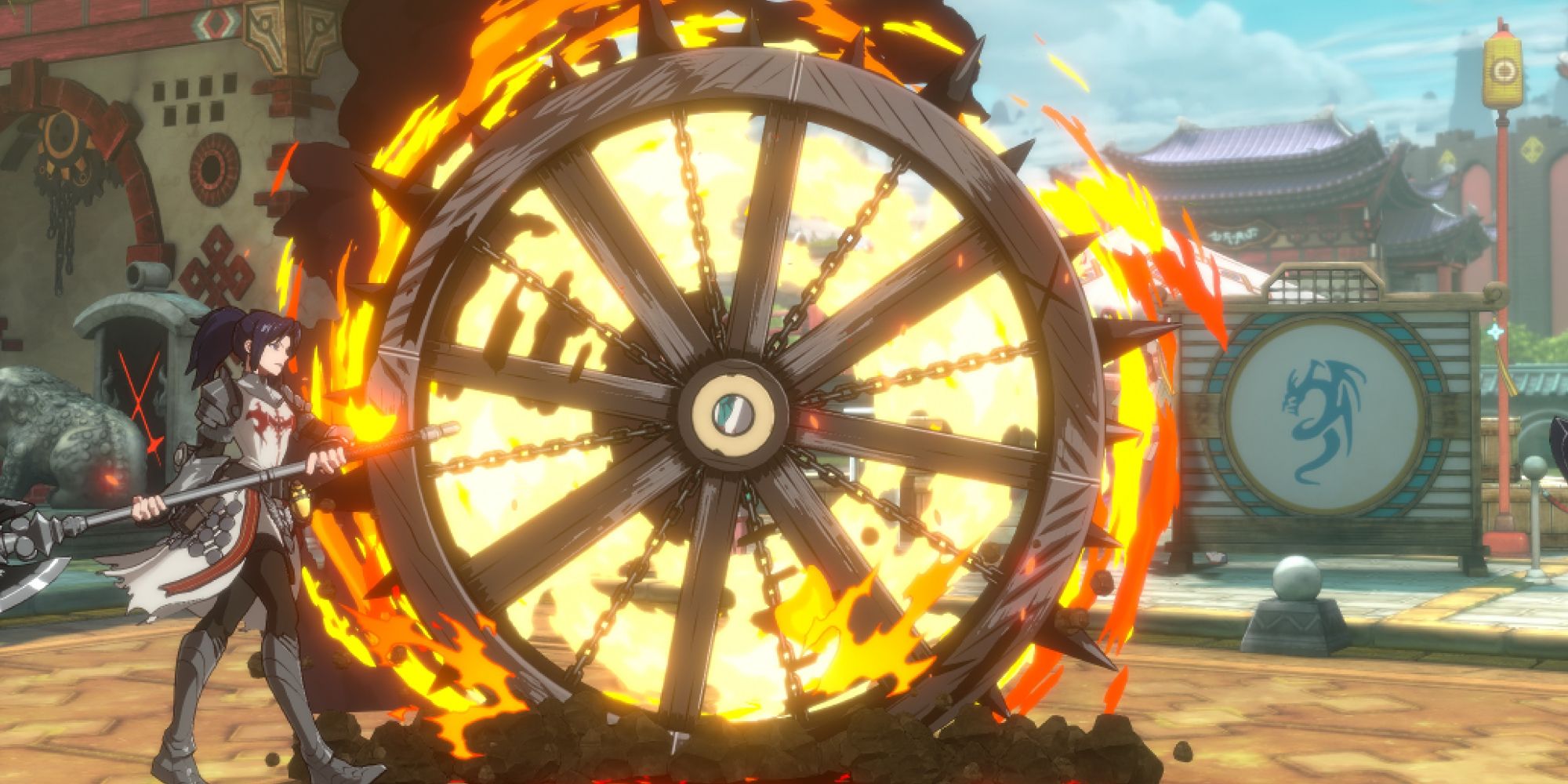 Burning Wheel is Inquisitor's best lockdown tool as she tosses out a towering flaming wheel with spikes that stays on screen for roughly three whole seconds. This will dramatically deplete her opponent's Guard Guage, lock them into place, or deal excessive damage if they get caught by it. Inquisitor can run into and push her opponent out of the wheel's chaos to throw them, making for a nasty throw mixup. It will also incinerate anyone inflicted with the Essence debuff. Overall, Burning Wheel is the best lockdown tool in the game and is excellent for extending combos, controlling space, and trapping your opponent.

If you want your Mana Gauge to refill slightly faster, some of your Mana Skills can be executed using Motion Inputs. While the 'simple input' option still exists, your Mana will regenerate slightly slower if you use it. Noble Rage is one of these Mana Skills that can be inputted with either 4MS or 214MS (⭣⭩⭠MS). 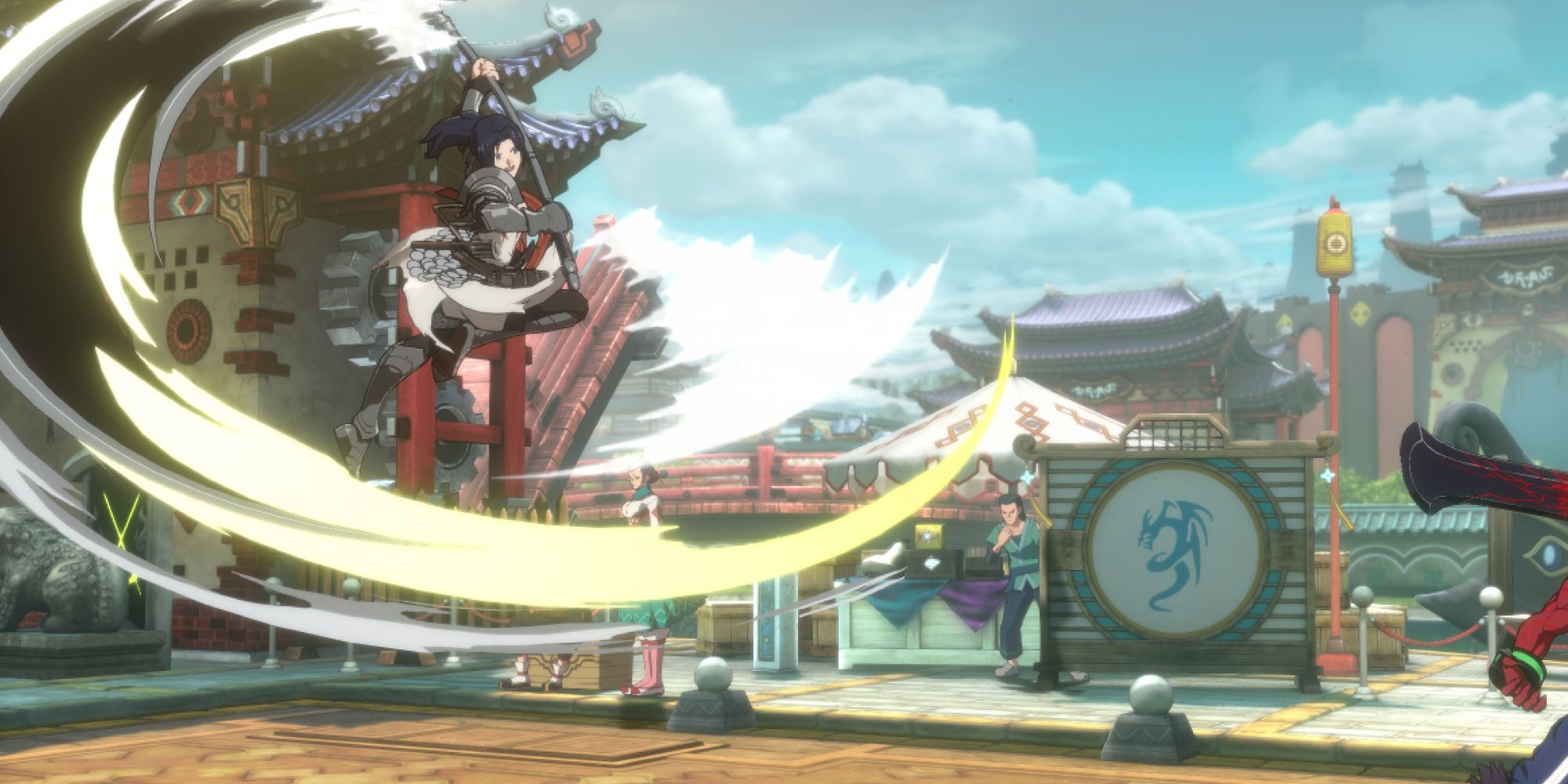 God's Wrath is Inquisitors j.MS action that costs 70 MP to execute and has her violently spin through the air, swinging her greataxe with tremendous force and momentum. Due to how swiftly Inquisitor propels herself forward, God's Wrath is an excellent way to close the gap between you and your target. Additionally, if an opponent is hit with the final swing from God's Wrath, they will be placed in a hard knockdown state, allowing Inquisitor to follow up with OTG-capable attacks. The final hit will also incinerate opponents who are inflicted with the Essence debuff. 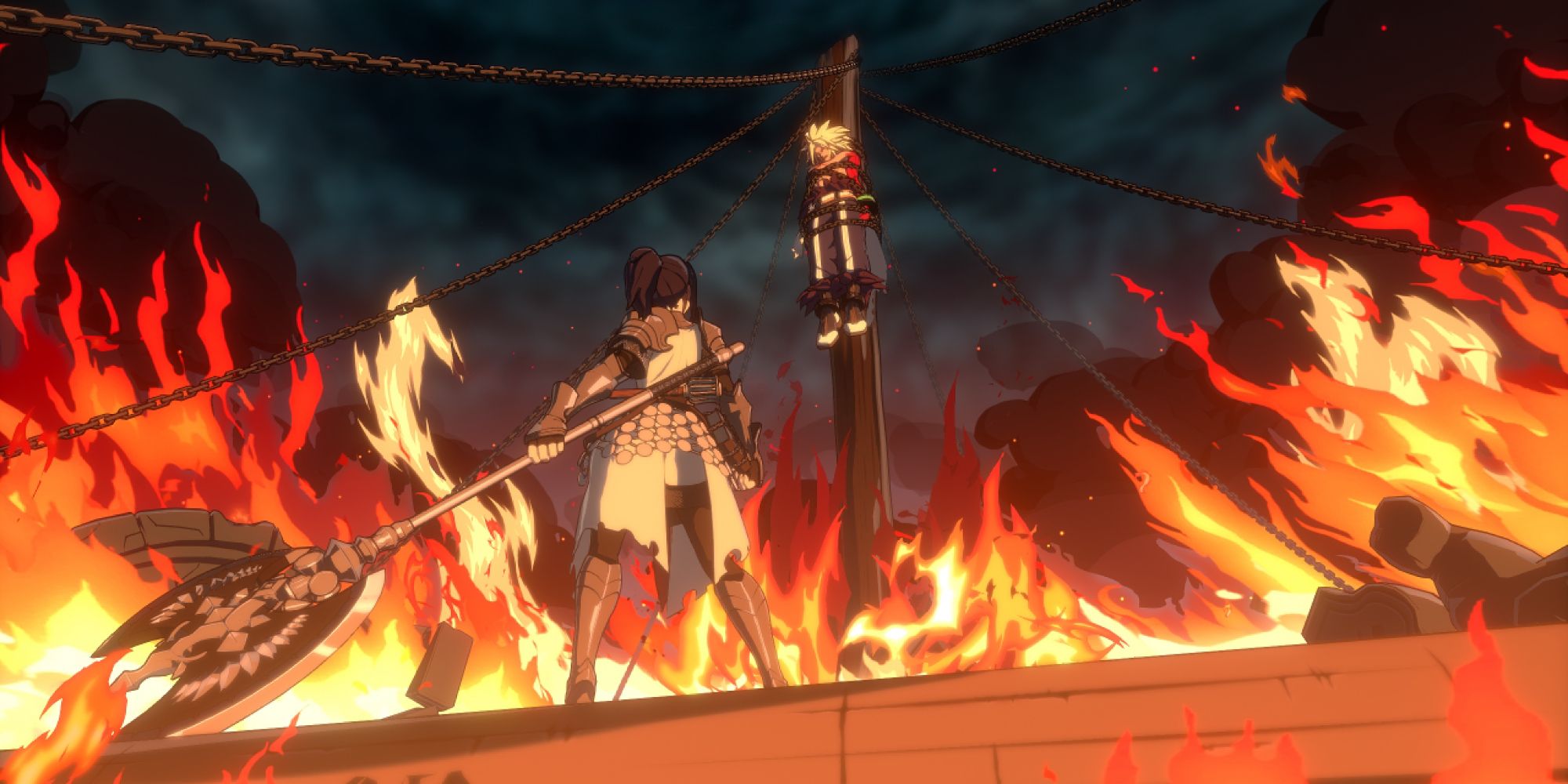 Awakening Skills and Effects are DNF Duel's 'comeback mechanic' that becomes active whenever you enter an Awakened State, which happens whenever you have 30 percent or less health remaining. The Awakening Skill is an ultra-flashy and absurdly powerful move that plays a lengthy cutscene, and the Awakening Effect is a passive buff that typically enhances your character's strengths.

Blazing Hell is Inquisitor's Awakening Skill, which has her swing her great axe in front of her, covering a wide horizontal range, making it an excellent way to cap off combos. Her cutscene has her burning her opponent at the stake and is undoubtedly one of the best Super Cinematics in the game.