Very early in Dragon Quest Treasures, you will get control over your own base. And with this base comes a few perks. For starters, you will be able to start recruiting monsters. However, if you want to get the most out of your headquarters, you are going to need to start doing your Gang Quests.

These quests will help you acquire a number of valuable stores, as well as increase the maximum size of your gang! These quests will send you to the farthest corners of each island, recruiting characters, and gathering resources. Thankfully, we are here to help you stay one step ahead of the game! 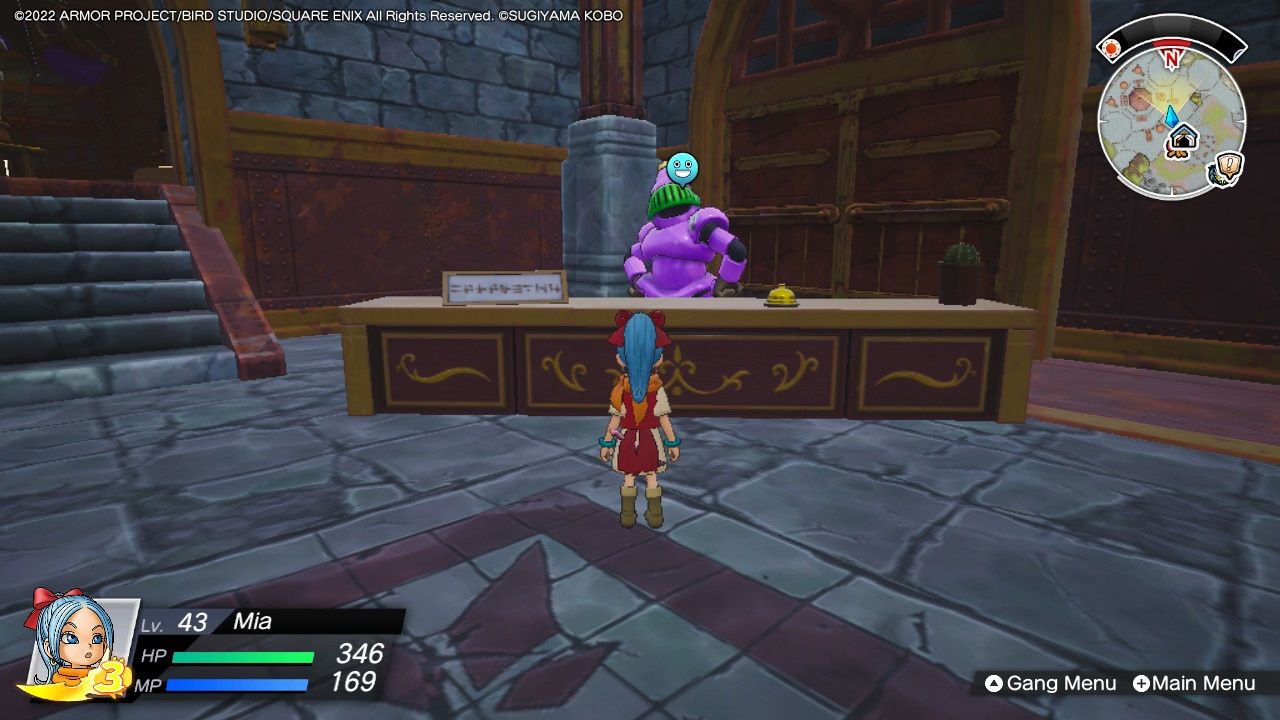 Once you have fully unlocked the base, hired your foreman, and unlocked travel between the different islands, go talk to Miss Cecily. She will tell you that she wants to expand the base. She will then tell you about three vendors whom you can recruit. It is your choice who you start with, but they all are valuable. B. Rix sells materials and recipes, Axel will sell (or craft) ammo for your catapult, and Chez Blancmange will make prepare food. It doesn't matter which order you complete these in.

If you don't formally take the quests from Miss Cecily, then the shopkeepers won't engage with you on the topic of their recruitment. You need to take the quest first! 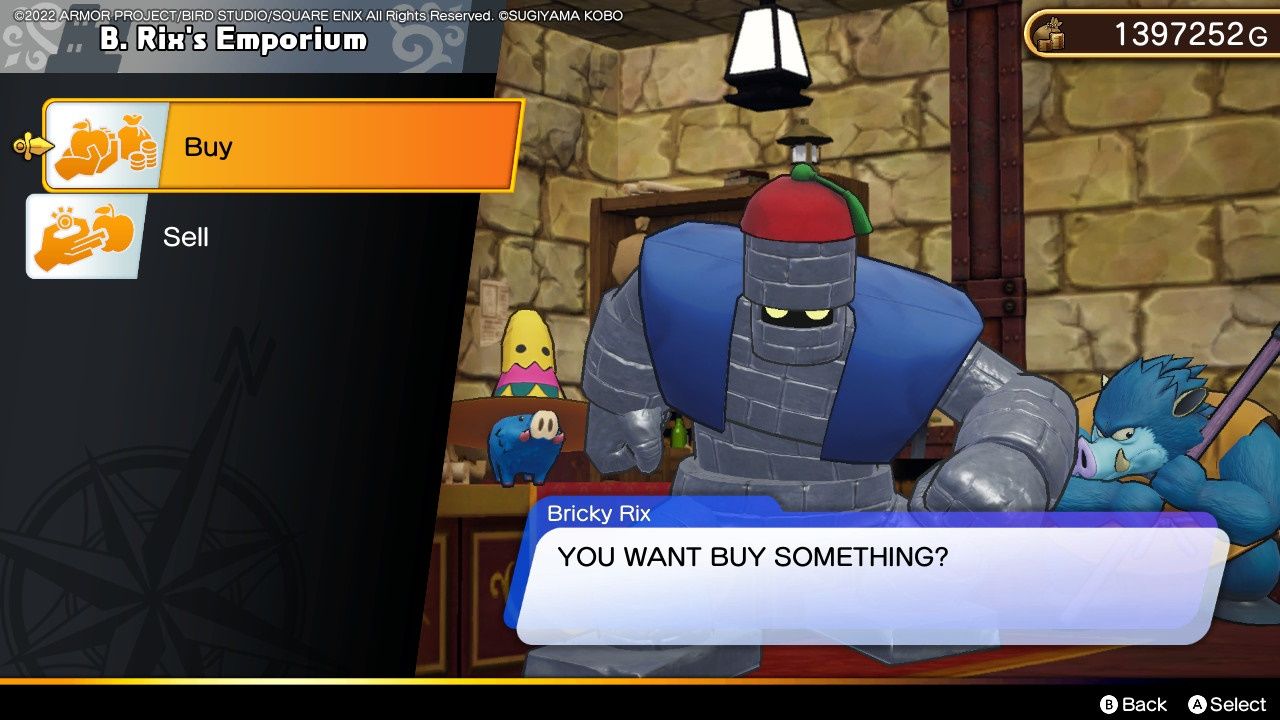 To get a shop up and running at your base, you are going to have to talk to B. Rix in The Maneland. However, before you leave for the Maneland, do yourself a favor and make sure you have a Flintstone on hand. This will save you a ton of backtracking. If you don't, you can head to the Paternoggin. There isn't an abundance of Flinstones here, but we did find some around those jagged stones east of the ruins. If you don't find any, check in the rocky area just south of the ruins, there is a good chance you will find some there.

Alternatively, you can send monsters out on expeditions to the Cold Shoulder Central Area to look for Flintstone.

Of all the shopkeepers you will recruit, B. Rix is the furthest from the Train Station. However, as long as you follow the main path, you will eventually reach the little settlement where he is hanging out. Talk to him and hand over the Flintstone. He will now set up shop back at your base.

If you are feeling brave, head toward the East and look for the Hunter Mechs (there are a bunch of them near the eastern tip of the continent). If you are doing the A Convenient Store quest early in the game, they will be pretty tough, but with the use of Dragon Attacks you will be able to beat them. Try to pelt them with Buddy Bullets and see if you can't convince one of them to join you. You will need a Hunter Mech for a Gang Quest down the line. 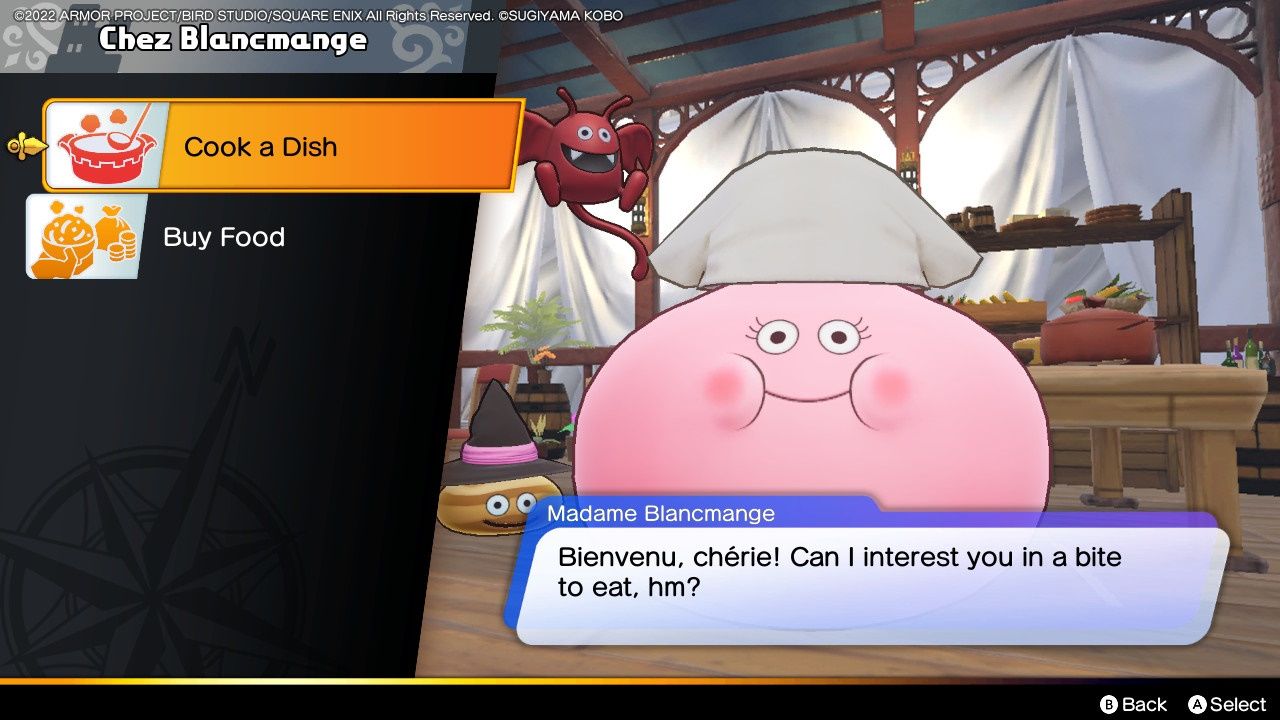 Talk to Chez Blancmange in the Wingswept Moors. However, make sure you have plenty of Buddy Bullets, as you are going to be doing some recruiting. Chez Blancmange isn't hard to find. She is just a little north of the station. She will request that you recruit a Ham Shamwitch to assist her. Well, you are in luck, guess what monster is shuffling around this very area? That's right, a Ham Shamwitch.

So, go out and battle the Ham Shamwitchs circling the marshy area—there are a bunch of them east of the train station. Once, you snag one, head back to your base and formally recruit them. Then, once you have hired a Ham Shamwitch, head back to Chez Blancmange and talk to her again. She will now set up shop at your base!

Northwest of Chez Blancmange, you will find a group of Gigantes. Killing these monsters will, occasionally, provide you with a Magic Beast Horn. This is an item you will need for a later Gang Quest. So, if you are feeling brave, venture out and tangle with the huge monstrosities. They will likely be a lot higher level than you, but by using your monsters' Dragon Attacks, you will be able to take the advantage. You will need 5 Magic Beast Horns in total. Doing this now will also help level you up, as they will provide a hefty amount of experience points. 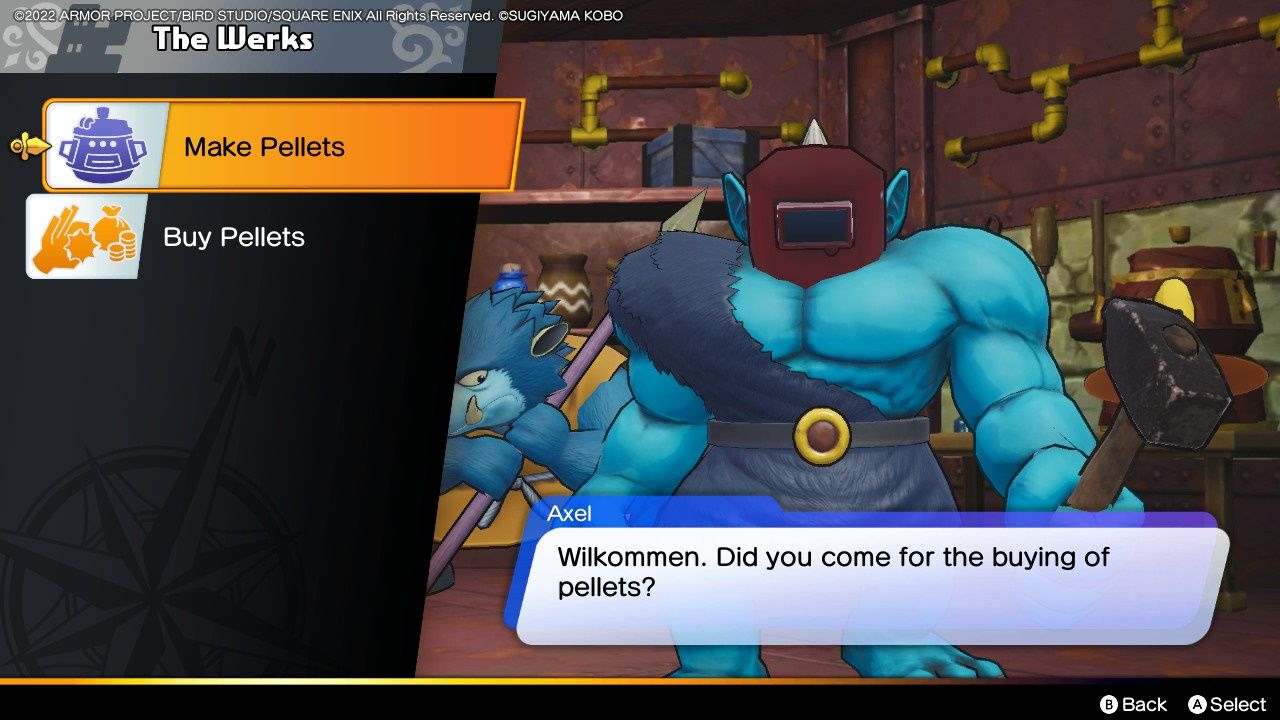 Axel is the easiest to acquire of the bunch. He doesn't require any prep. He is positioned on the main path, right near the train station. Talk to Axel and bring him a Cinderblock. Lucky for you, the Cinderblock is in a set location. Set this as your active quest, and travel on the path that leads to the northeast. 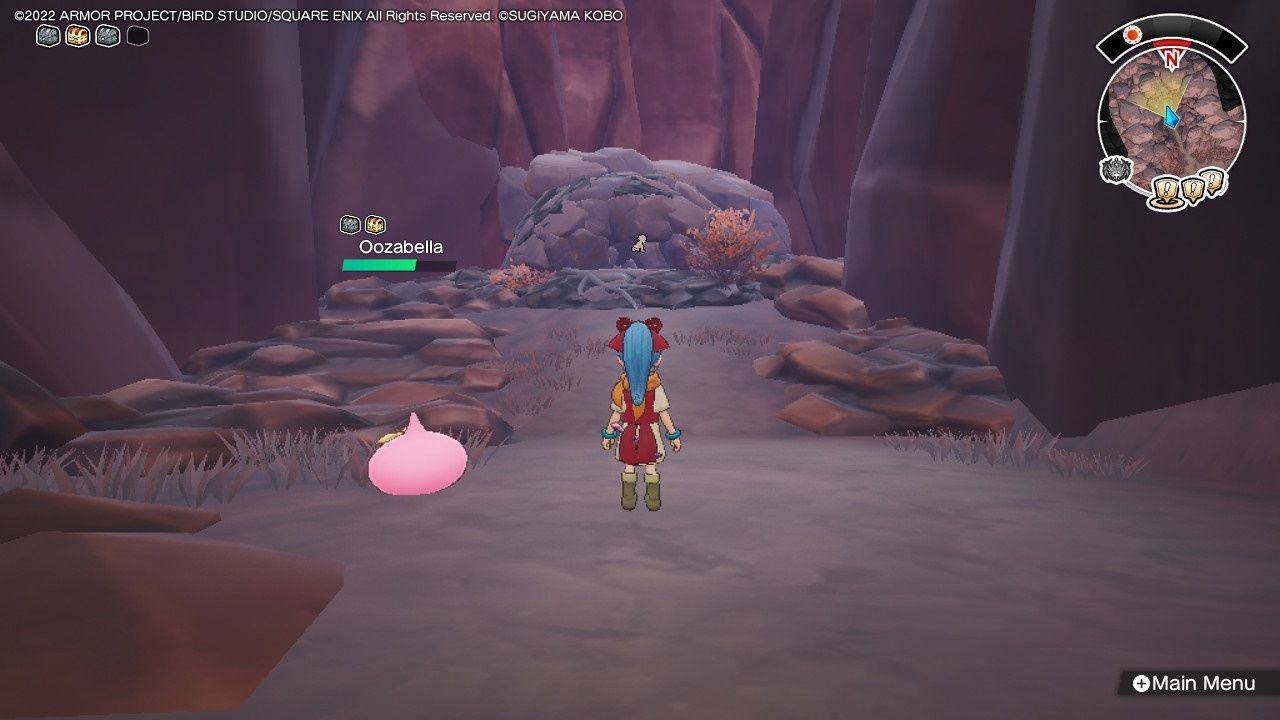 The marker for the Cinderblock will appear to the north of the path, so you will need to climb up to the raised area left of the trail at some point. Unsurprisingly, it will be a lot easier to get up here if you bring a monster with the launch ability. The Cinderblock is in a cave. It is hard to miss, as there is a path that leads directly to it. Once you have the Cinderblock, take it back to Axel. And just like that, you will have a blacksmith!

Miss Cecily is looking for you to bring her a Glacial Golem. These guys are littered all around The Hinterquarters. Unfortunately, they aren't concentrated in one spot. They are present in a number of locations, but it tends to be one at a time, and they often don't reveal themselves until you are quite close. Bring lots of Buddy Bullets and monsters with fire spells (basic Slimes come packing Frizz and you surely have one of those kicking around). At least for us, we had to battle quite a few Glacial Golems before we got a taker, but that just gives you an excuse to explore the Hinterquarters and find treasure. 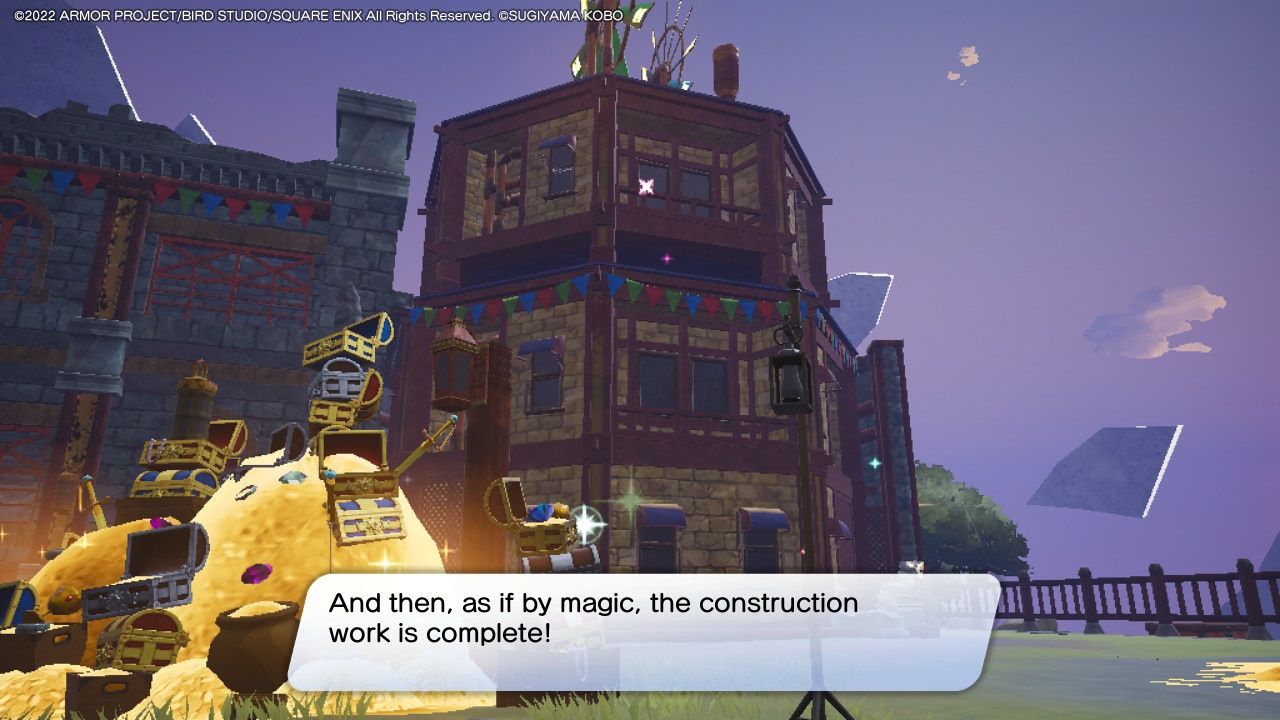 The final expansion for your base will require two things: 5 Magic Beast Horns and recruiting a Hunter Mech. The Magic Beast Horns are easy enough to acquire. As we alluded to earlier, there is a group of Gigantes on the Wingswept Moors that is very close to where you first met Chez Blancmange. Go there, pinch from the Gigantes, and then slay them. You will get those 5 Beast Horns in no time.

The Hunter Mech isn't particularly difficult either. You simply need to go to The Maneland and travel toward the eastern section of the map. If you have unlocked some of the railway stations here, the Rib Bone Rampart will get you pretty close to some Hunter Mechs. Once you have enticed a Hunter Mech to join you, simply speak to Miss Cecily and you will get your second dormitory!

From the Rib Bone Rampart cross the nearby watering hole, and climb up to the level above; you will need a monster with the launch Forte to get up here. There will be Hunter Mechs in this area. However, some of them are buried in the sand and will only make their presence known when you are close.