You can wear up to seven rings at one time, although you can only attune to three things per character so choosing the right rings to go on your hand is vital. Most of it depends on the style of character you choose to play, however, some of the best rings in Dungeons and Dragons are transferable throughout the party and will more than likely save your life or at least help you out in a sticky situation.

Ultimately, every player has their favorite setup and ring choice, and it depends on what you as a player and your party as a whole are lacking. So, despite these rings being undeniably awesome, it's key you look into what you really need, not necessarily what you want. Also, what your DM is willing to give you. 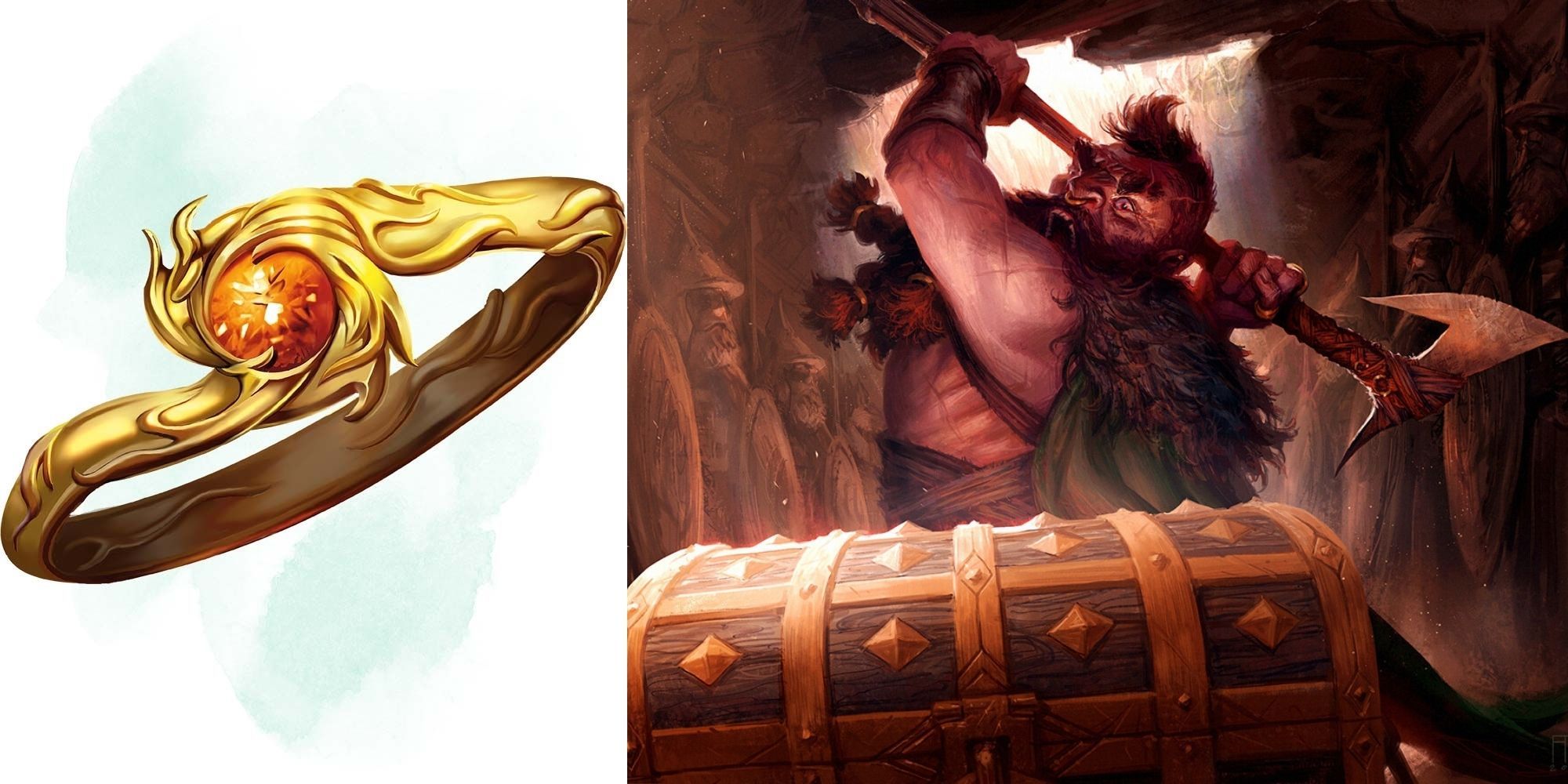 At a brief description, the Ring of Resistance grants you resistance to a certain type of damage. It all depends on the type of ring you end up finding or buying, so it's relatively versatile. However, it's worth knowing from the start that there are three types of damage that you can't be resistant to while wearing this ring. Those are, bludgeoning, piercing, and slashing.

That being said, if you're a barbarian who needs their last resistance to psychic damage then this ring could be perfect. Or if you're about to go up against an ancient dragon and don't fancy getting blown to pieces before you have your turn, why not invest in a Ring of Resistance. 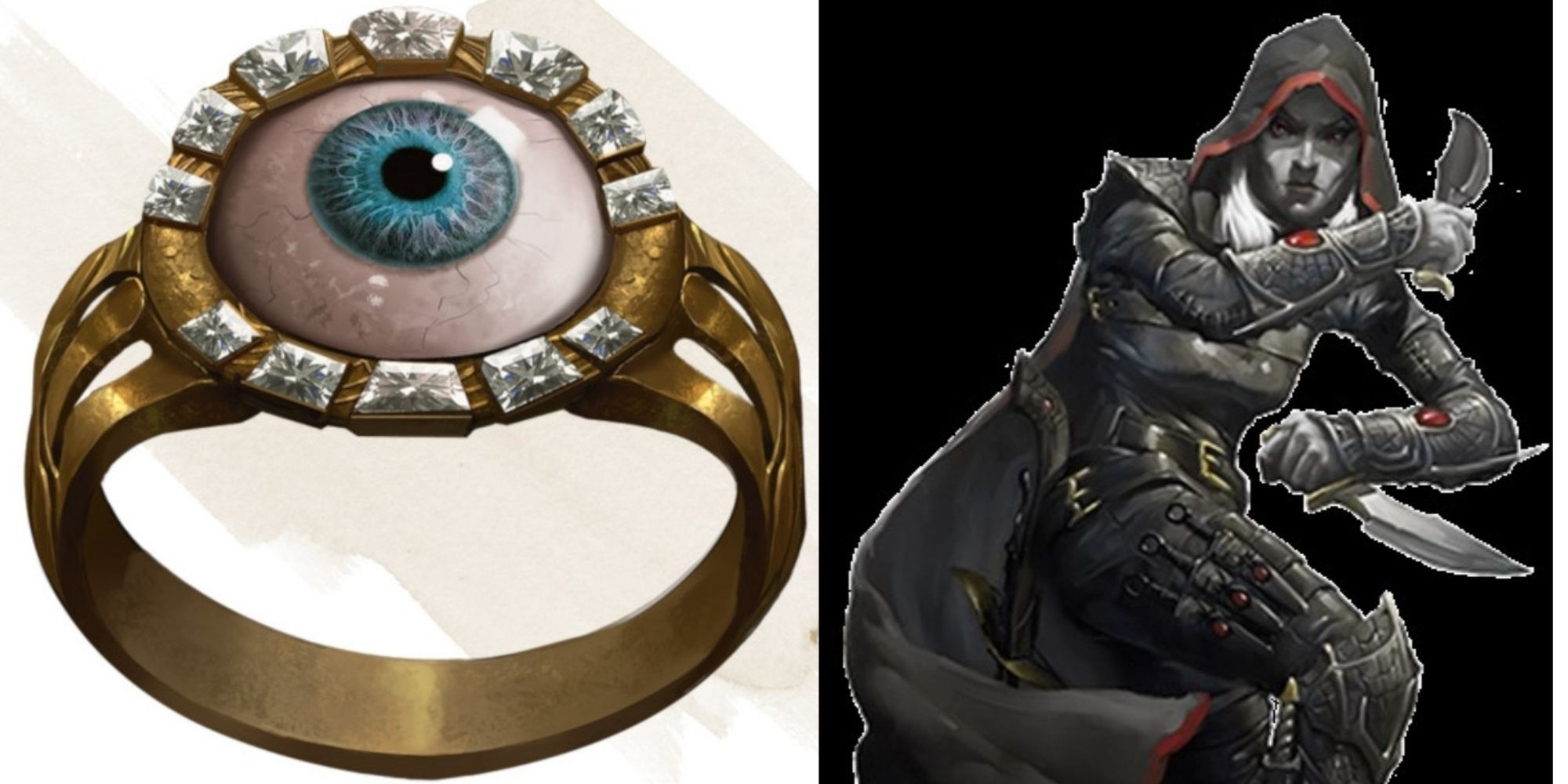 Not only is the Ring of X-Ray Vision a pretty cool but creepy design, it is one of those rings you never thought you'd need or even want. However, once you put this on you'll never want to take it off, it's just too useful. Especially if you need to do some spying, some infiltration, or if you just want to know what you're up against before you get into the building.

Essentially, the Ring of X-Ray Vision grants you the ability to see through solid matter for one minute in a 30-foot radius. You need to spend an action and can only do it once per day without having to make a constitution saving throw to try again. There's also the matter of thickness. You can see through one foot of stone, one inch of metal, or three feet of wood or dirt. It has its downsides, but who doesn't want X-Ray vision? 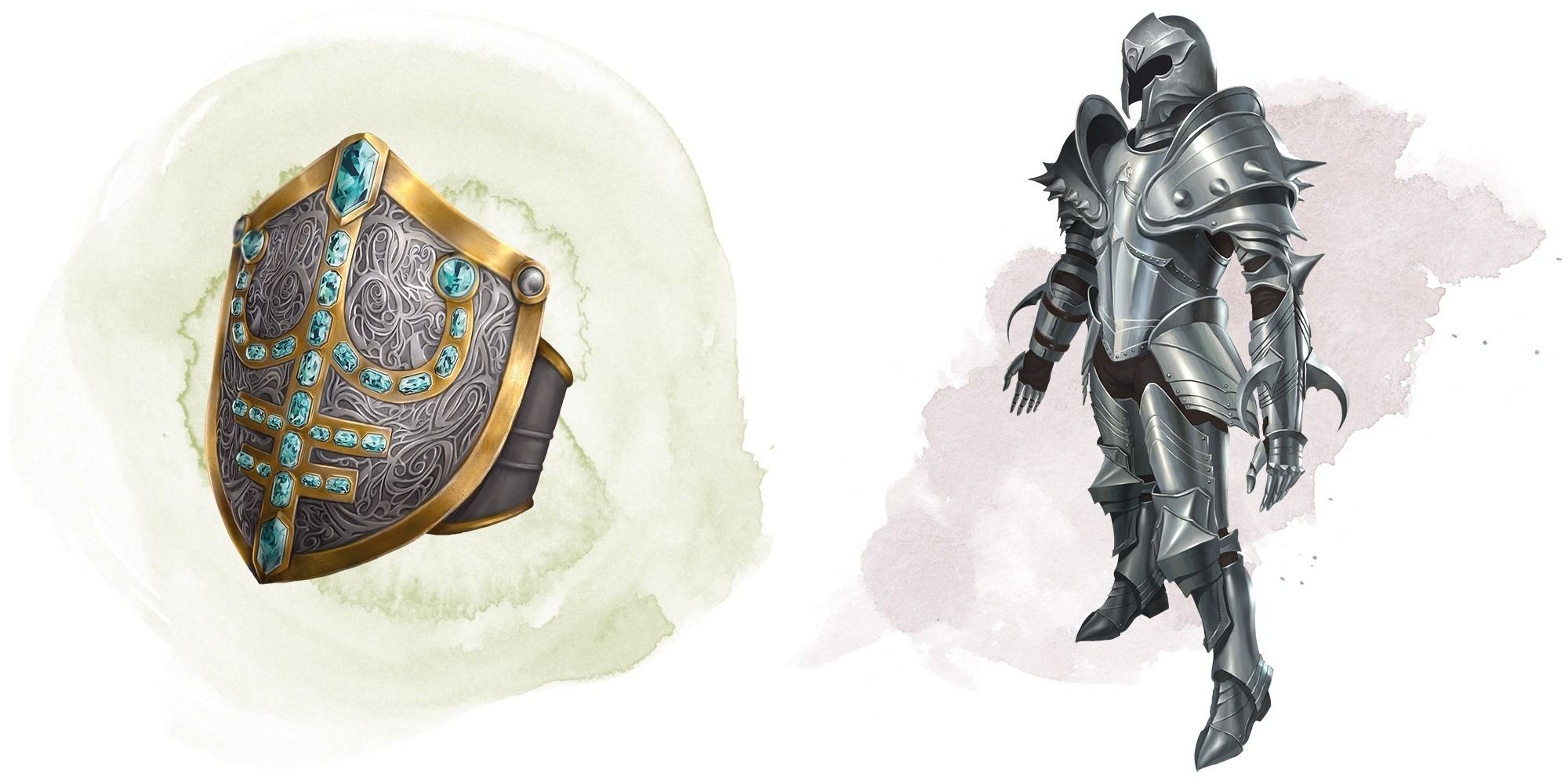 Finding that your armor class is just not holding up against your level but you don't want to get new armor for fears of it affecting your stealth or other elements you've grown to love about your character? Then why not look into the Ring of Protection?

It grants you a plus one to your armor class, no strings attached. On top of this boon, you get a plus one to your saving throws too. It may not be a huge improvement but that extra one will help you more than you'll ever realize. 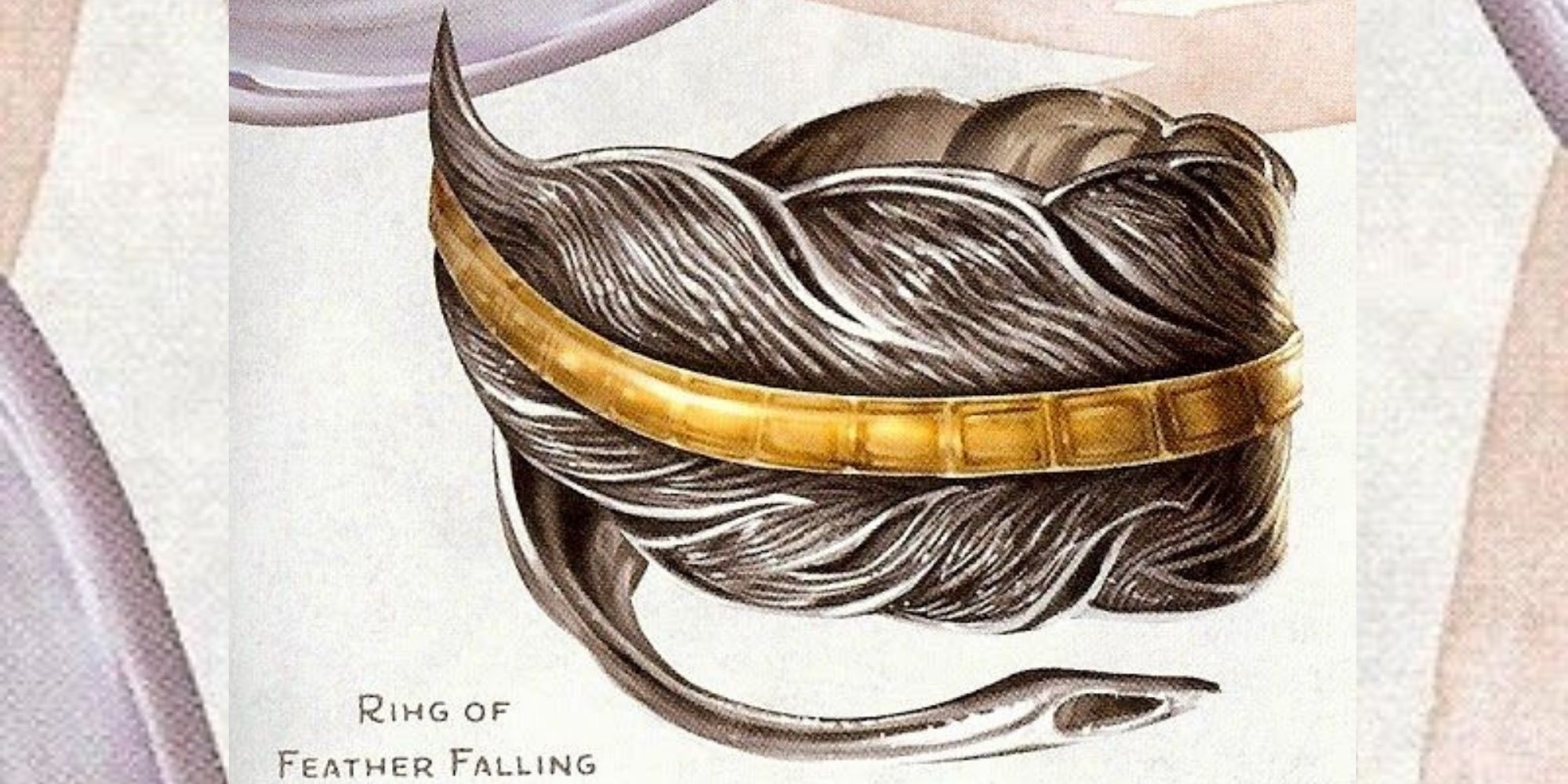 Whether it's in the form of a potion, a spell, or a ring, feather falling is one of the most important lifesaving elements of Dungeons and Dragons. Too many good characters have fallen to their deaths in campaigns where they just wanted to look cool doing something, but the dice let them down. So why not try to prevent that by getting yourself a Ring of Feather Falling?

While wearing this ring, you will fall at a rate of 60 feet per round, also meaning you can't take damage from falling at any height. You never know when you might need it but when you do use it then it's guaranteed to save your life. 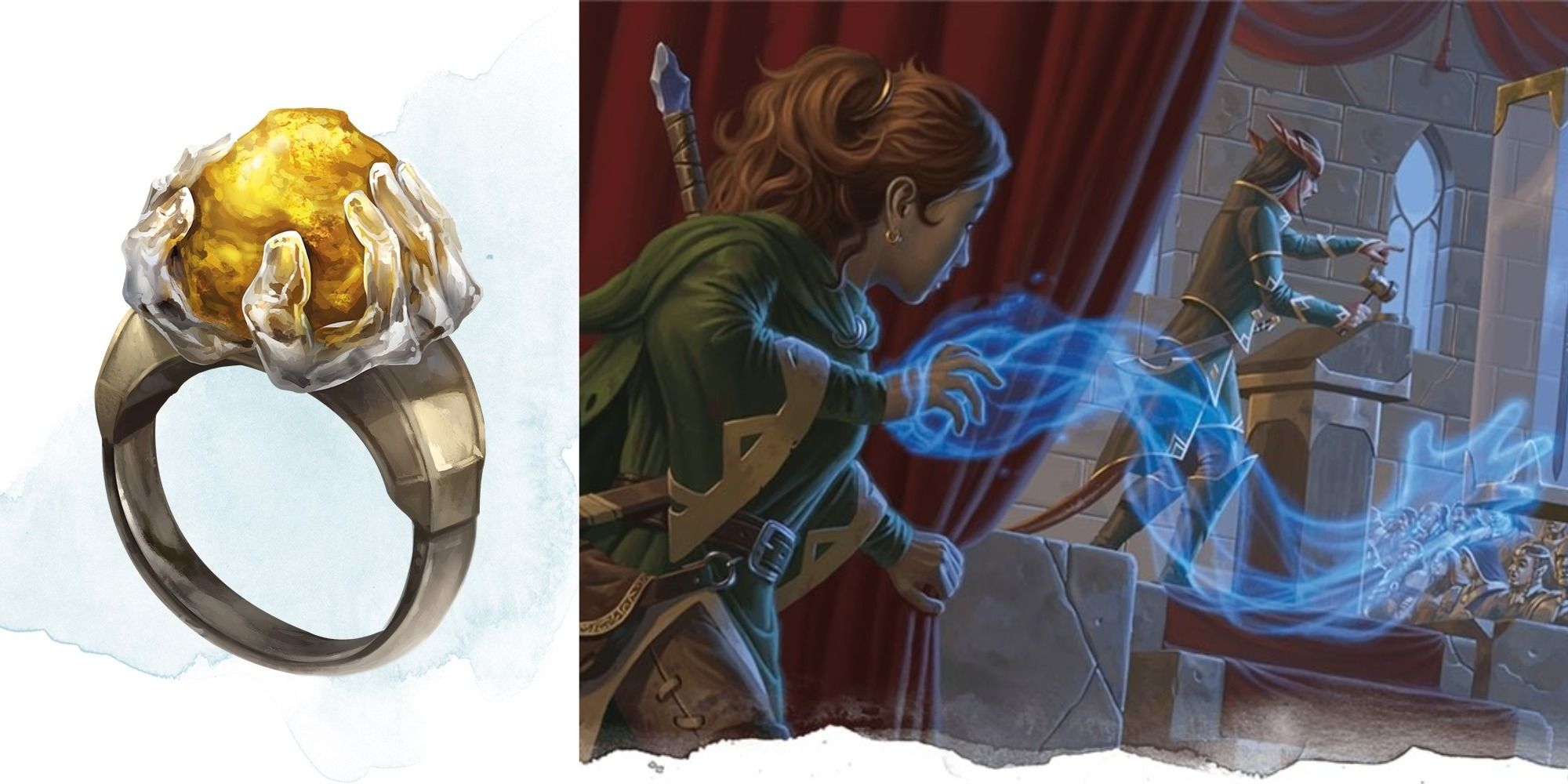 While it may not be as good as the telekinesis spell, the Ring of Telekinesis is pretty fun to have and use. It could also come in particularly useful for disarming traps, moving things in the way of doors, or out the way of doors, or just moving the door off its hinges. After all, with this ring, you can move objects that aren't being worn or carried and are under 1,000 pounds in weight.

This is perfect for the resourceful player who likes to think before they act and loves coming up with different solutions to problems they encounter. You can do so much with this ring that, when given to the right person, will be much more than it's worth in gold. 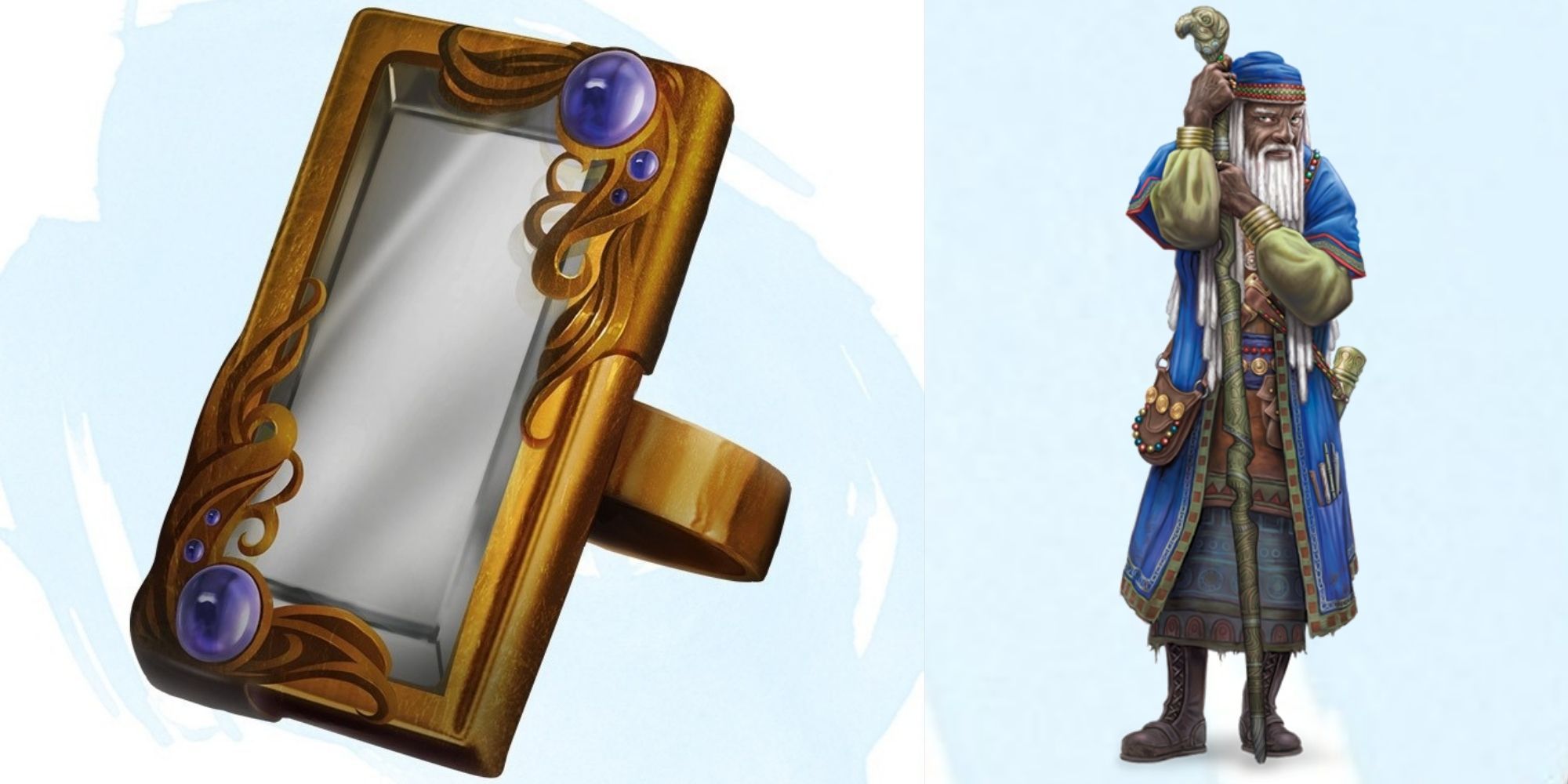 It's worth mentioning from the offset that Yuan-Ti and Satyrs shouldn't really be focusing on getting this ring as the primary element is something they get at character creation. Nevertheless, if those races aren't the ones you're looking at, this ring is awesome for any spellcaster, or really any member of your party who seems to get hit with spells a lot.

Ultimately, the Ring of Spell Turning turns the spell back on the caster. So, not only do you get advantage on saving throws against spells that choose to only target you, but if you roll a 20 on that saving throw then you can turn that spell back onto the caster. IHowever, it has to be a spell that's 7th level or lower that only targets you. 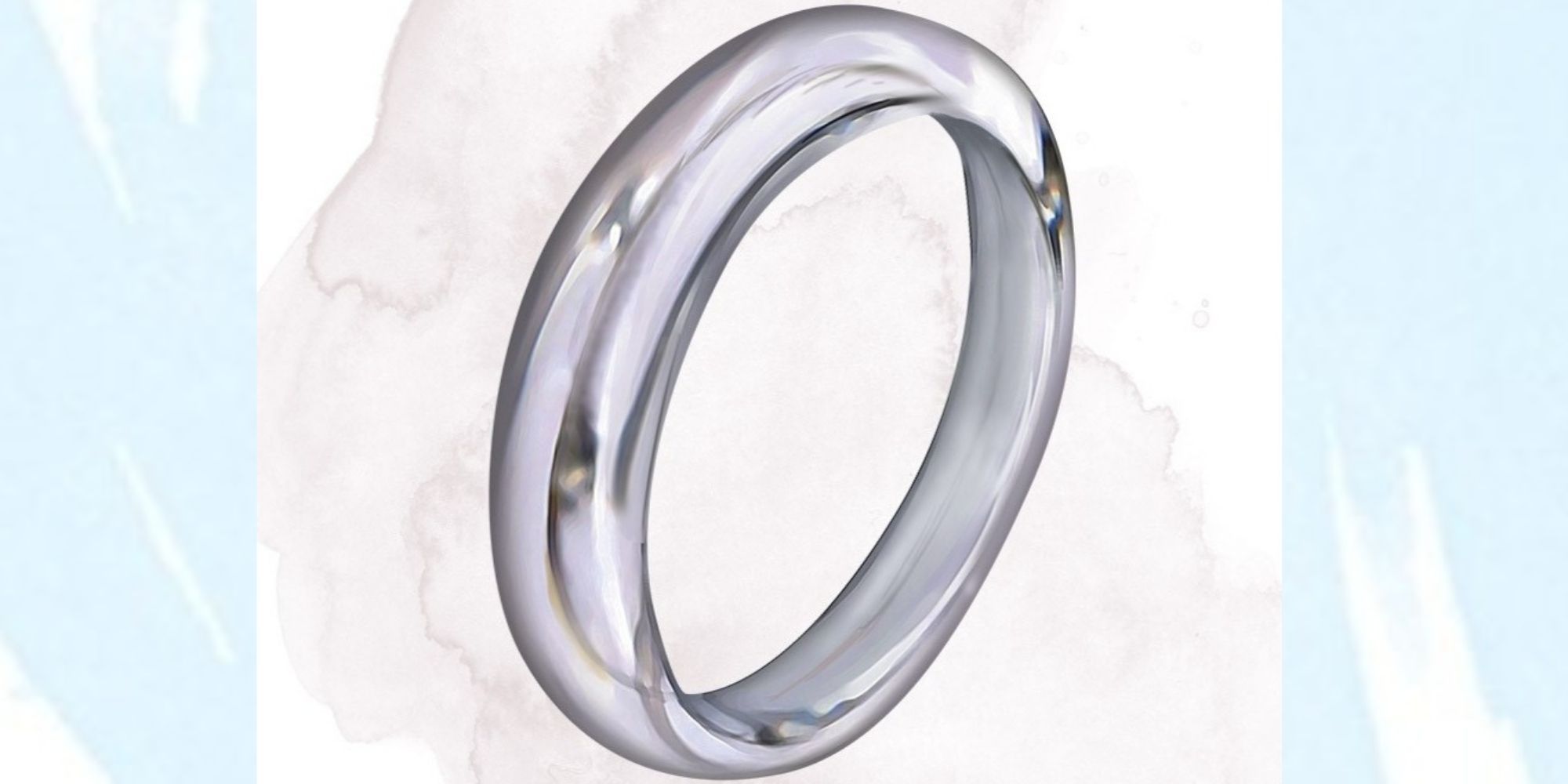 Just like the potion, who doesn't want the ability to turn invisible whenever they want to? The ring of invisibility is considered legendary and one of the most useful rings in the game since there is no defined amount of times you can go invisible. This means that you can sleep soundly knowing you're not likely to be noticed, you can sneak into places, watch suspicious people, and really just get around without being noticed, all without casting a spell.

It's also worth noting that if you cast a spell or use an attack then the invisibility will fade. Nevertheless, it's an incredibly useful ring if you use it right and is well worth getting a hold of if you can. You never know when you might need it. 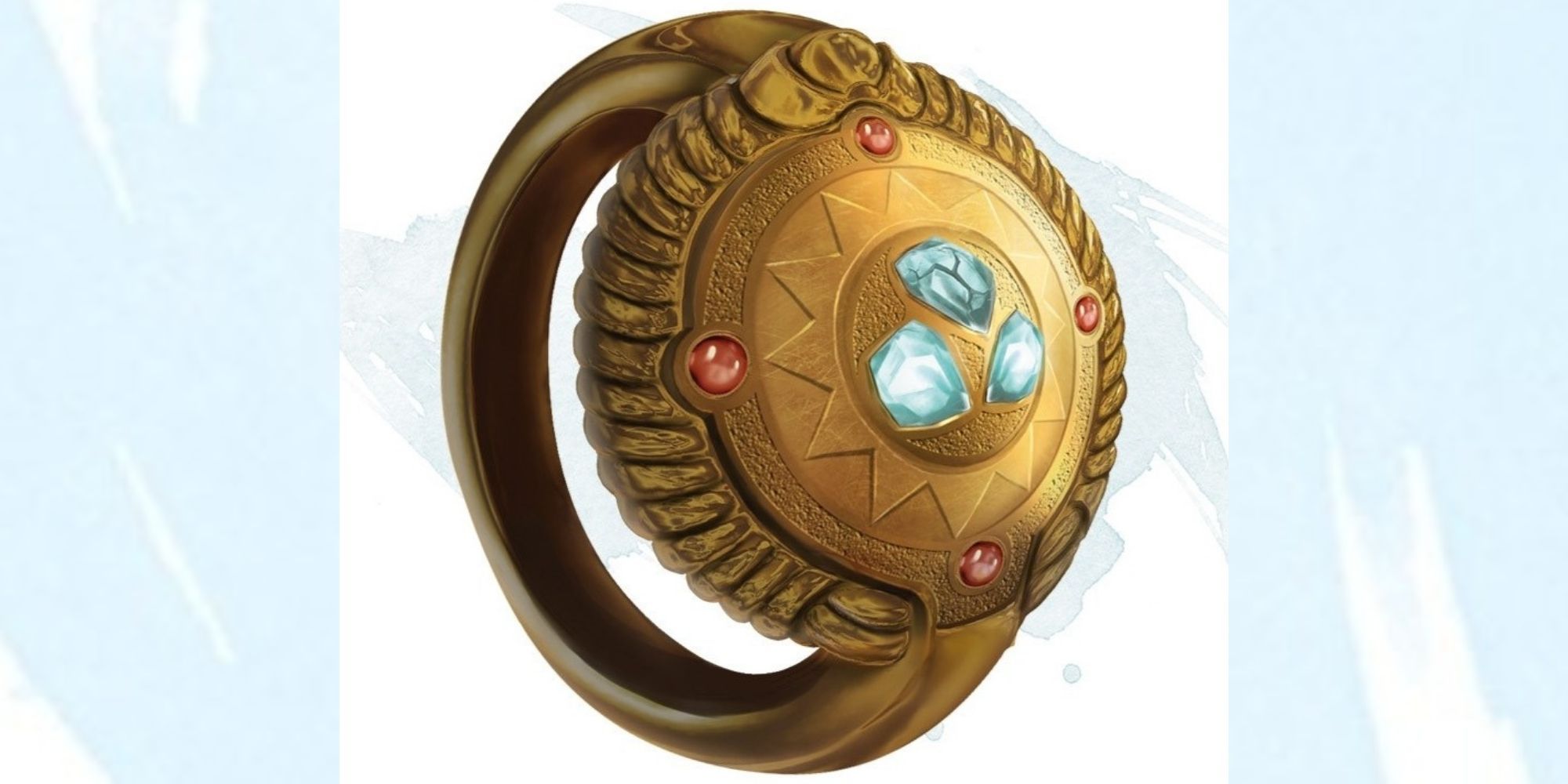 As one of the few rings that don't require an attunement, the Ring of Three Wishes is unbelievably powerful and is easily one of the best rings in the game. Therefore, it's probably practically impossible to get, and that's if your DM even allows you to buy it or find it. After all, this is incredibly powerful and easily game-changing.

Essentially, the Ring of Three Wishes grants you the use of the Wish spell three times. It's incredibly powerful but should be handled with care as it does say that some requests could be interpreted wrong or could lead to disaster. So make sure you're kind to your DM before making the wishes. 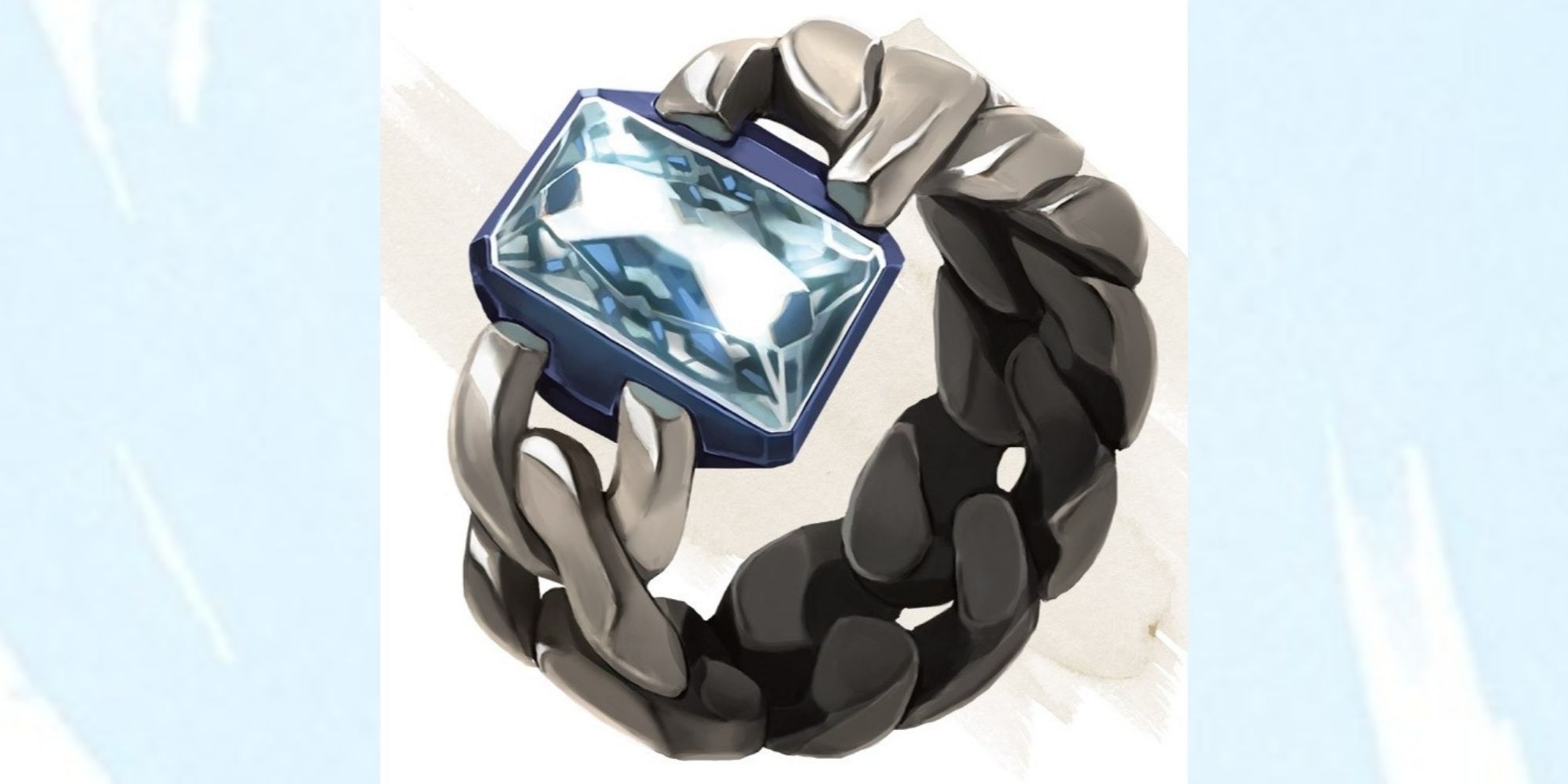 Don't get overly excited when it comes to this ring, it doesn't give you a free action, instead, it focuses more on your movement. That being said, although it might not give you a new action, it does mean you won't be slowed down by difficult terrain, making exploring or combat in a swamp or other tough terrain a little easier.

That's not the best bit of this ring however, as it has another element that is unbelievably useful throughout your campaign. While wearing this ring you are immune to any magical effect that can try to paralyze, restrain, or reduce your speed. This will give you an incredible advantage against any magic using foe. 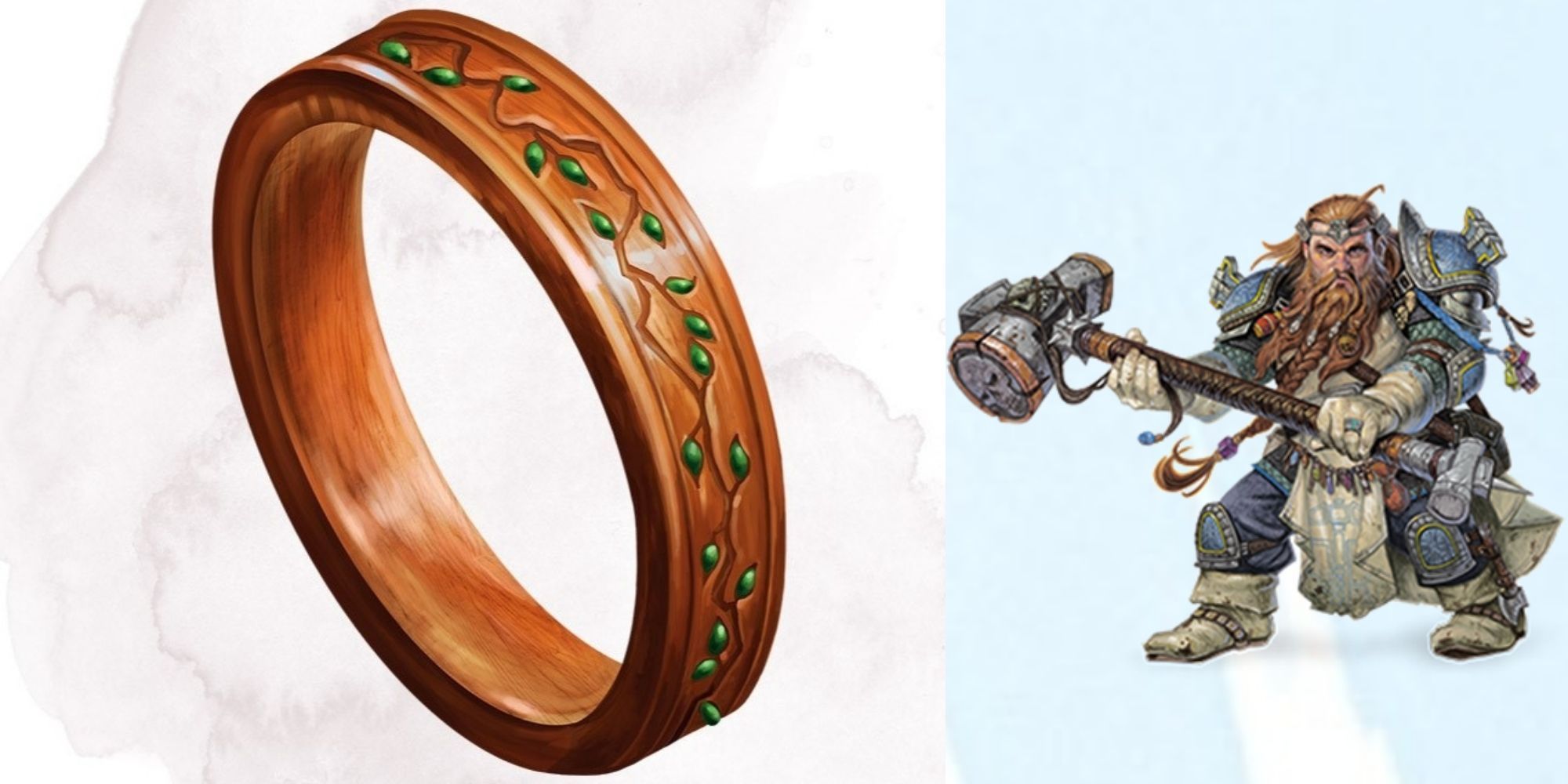 It really feels like this ring should be worn by someone trying to play a Deadpool-inspired character. After all, the Ring of Regeneration will allow you to get back 1d6 hit points every 10 minutes. Unfortunately, you do need to have one hit point for this to work, so it doesn't make you immortal. However, it will be pretty useful while you're exploring or have just come out of combat.

Due to it being a 1d6, you can't exactly replace healing spells with a Ring of Regeneration, but any healing is useful healing. It can also regrow lost limbs if that's how you play D&D.