The Astral Sea, or the Astral Plane as it is sometimes called, refers to neither a plane nor body of water but a highway connecting the various Outer Planes of Dungeons & Dragons cosmology to the realms of mortals, the Prime Material. Described as a silver-colored void, the Astral Sea is a seemingly infinite expanse of pale gray, swirling pastel mists, and distant starry skies drifting lazily without end. It is a plane made entirely of the thoughts, fears, and dreams of mortal and immortal beings, and as such, it is ever-changing.

Reaching the Astral Sea requires either a spelljammer ship, a portal found on another plane, the Astral Projection spell, or placing a Portable Hole inside a Bag of Holding (but that's a one-way ticket, so be careful.) In this realm, travelers will encounter structures native and foreign to the plane, several inhabitants that call the Astral Sea home, and the surreal experience of witnessing the corpses of dead gods which float through space, crystallizing into massive asteroids as their bodies decay. 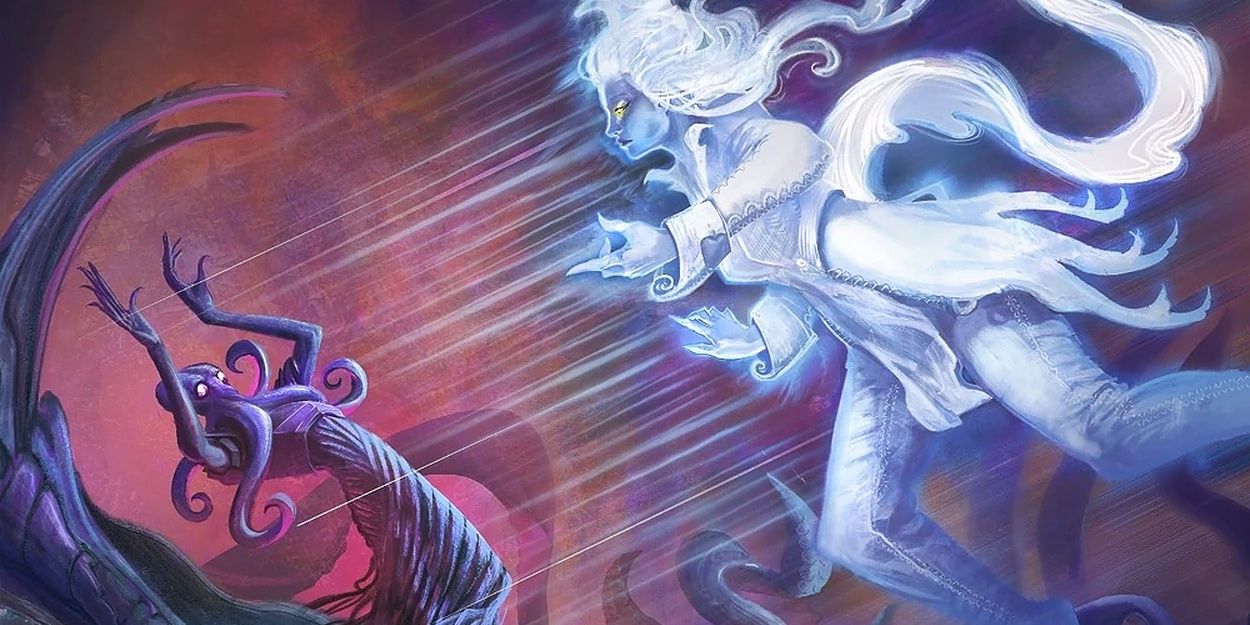 Adventurers who journey to this realm physically will quickly discover the air is thicker than oxygen but entirely breathable and strangely invigorating. The existence of air here may very well be a construct of the minds of travelers who require it, but it works all the same. The plane's temperature varies based on your proximity to different Wildspace systems but is otherwise that of a moderate summer's day. Suffice it to say it's a generally pleasant experience.

Time indeed flows in the Astral Sea, but at a rate so slow it is nigh incomprehensible to mortal measurements; one-thousand years on the Prime Material equals a single day in the Astral Sea. When you visit, you won't lose extra time in the Material Plane, like the Feywild, but rather that measuring the time you've spent in the Astral Sea is meaningless, as, upon your return to a physical plane, you will have lost only as much of your native time that you spent visiting. Because of the Astral Sea's unique temporal state, aging and hunger are at a standstill, which can also include the rate of a body's natural healing. However, when you return to the Material Plane, everything instantaneously catches up with you, typically only resulting in a ravenous appetite. 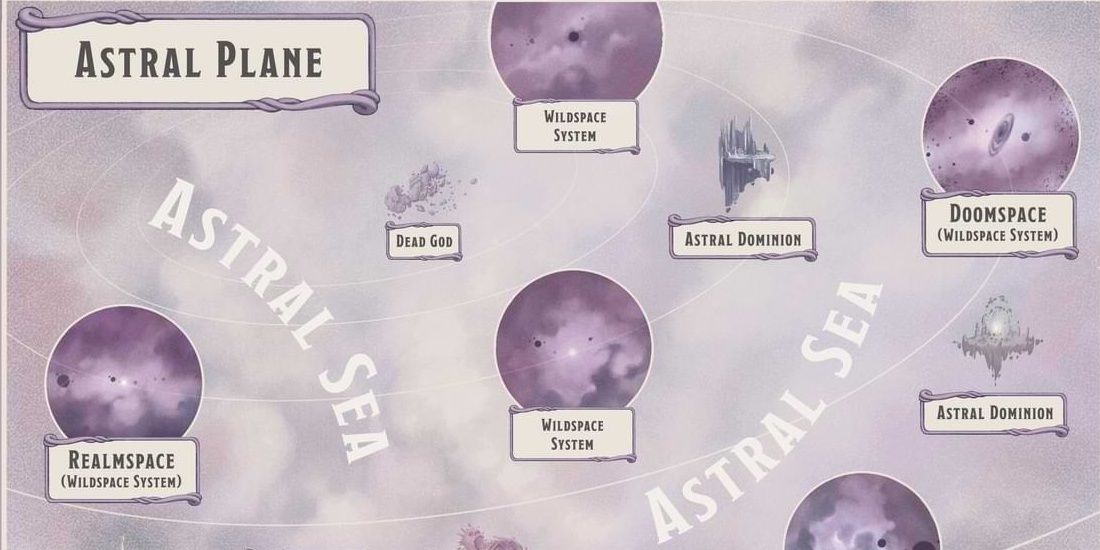 Since the Astral Sea is the realm of thought, movement and distance are primarily a matter of the traveler's perception. Though a person or object's mass is retained, physical and spiritual visitors both experience weightlessness. The movement here, then, is more akin to flying, and a traveler's mental capacity (or, mechanically speaking, their intelligence score) determines the speed and effectiveness of their movement. People can also propel themselves forward by pushing off something with greater mass, but their trajectory will continue without end until met by an opposing force. The distance between you and the location is based on your familiarity with the place; the better you know where you're going, the faster you'll arrive—simply imagining an image or phrase related to your desired destination will set you on the correct path.

Unless a traveler mechanically has a flying or swimming speed, any physical attacks not dealing piercing damage are at a disadvantage, otherwise, spellcasting and ranged attacks behave normally.

In earlier editions of Dungeons & Dragons, the planar changes to an individual character were massive, completely changing how you'd play. For example, strength scores disappeared entirely, and anything requiring strength was replaced with intelligence. Similarly, features requiring dexterity, like saves and the calculation of armor class, were replaced by the creature's wisdom. Magic was also greatly affected by the plane's native energies, quickening the casting speed of all spells and denying using spells that required a floor or conjured an extradimensional space. 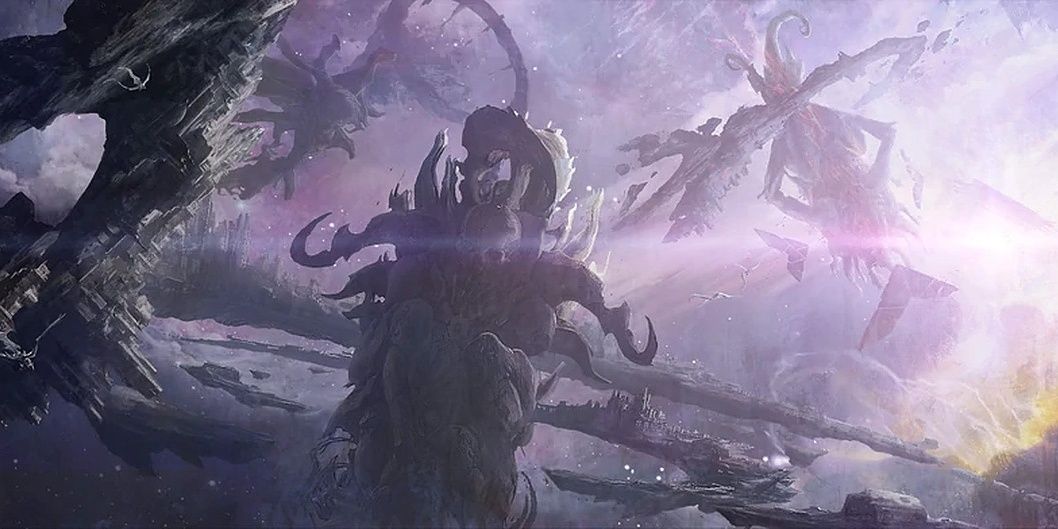 Many structures or landmarks within the Astral Sea are not original to the plane. Native inhabitants have built settlements, divine beings set up bases of operation called dominions, and pieces of other planes have broken off and drifted into the void like the Swallowed City. But throughout the Astral Sea, there are definitive features of the plane that you won't see anywhere else in the universe.

Strange puddles of colorful viscous liquid, color pools are two-dimensional discs only visible from one angle. Appearing as large as sixty feet in diameter, these color pools serve as gateways to specific Outer Planes and the Material and Ethereal Plane, with each destination determined by the color of the pool's liquid. For instance, a gold color pool will transport you to Mount Celestia, while an amethyst pool will send you to the Abyss. Still, as stated above, they are only visible from one side, resulting in unexpected detours for unlucky travelers running through one without realizing it.

Although they are not featured in the Spelljammer: Adventures in Space module for Fifth Edition Dungeons & Dragons, conduits are a fascinating landmark of the Astral Sea and make a lot of sense to still include in your own game. Conduits are tunnels that look like ocean currents connecting specific Outer Planes to the Prime Material or other Outer Planes. They are utilized by divinity for travel, to deliver spells and blessings to petitioners (such as a cleric), and receive souls on their journey to their respective afterlife. Entrances to a conduit can be found on the Material Plane but are usually heavily guarded by followers of whatever divinity the conduit connects. It's believed that the silver cords that appear above travelers visiting the Astral Sea via the Astral Projection spell are mini conduits, tethering the physical body left behind to the projecting soul.

The Astral Sea is filled with the bodies of dead gods, who died either to a fatal blow struck by another divine power or simply by being forgotten by mortal followers, which leaves a deity to wither and die, fading into obscurity. They slowly form into large rocks as they decay, becoming completely unrecognizable. Many native inhabitants of the Astral Sea utilize these corpses as a foundation for building settlements, such as the Githyanki capital city Tu'narath. In other cases, it is believed that these divine corpses can still emit powerful energies. Compounds such as the Divinity Leech are built to extract this latent power and store it for personal gain.

Appearing as all-encompassing darkness that overtakes the silver sky, psychic winds are the Astral Sea's most common (and most dangerous) storms. Psychic winds mentally damage creatures, inflicting harm, stuns, and madness. They will also divert a traveler's course, sending them to a different location than intended and even ejecting them from the plane through a random color pool. Other storms are variations of a psychic wind but are fueled by specific forms of mental energy such as dreams, emotions, or premonitions. The adverse effects remain, but in some rare cases, they can offer insight into the past, present, or the individual self. 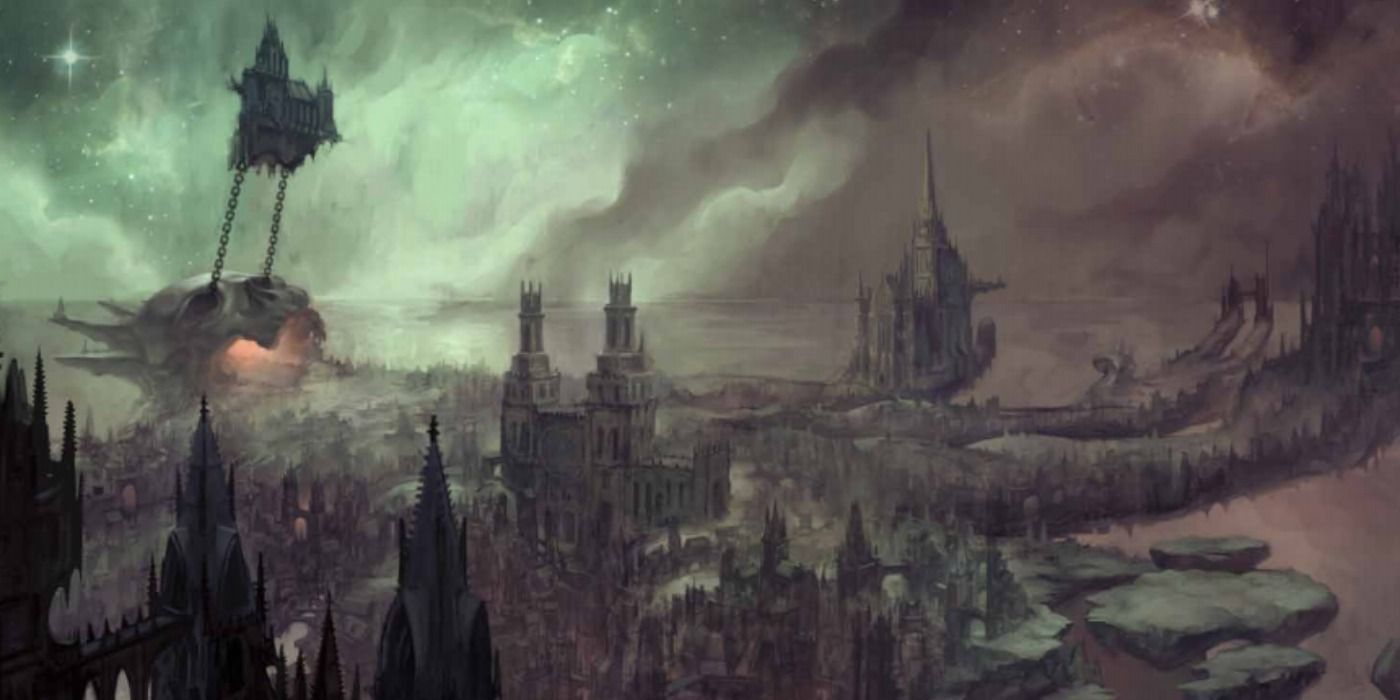 In truth, the inhabitants of the Astral Sea can be virtually anything you'd find in the universe. Its connection to the Outer Planes and Material Plane means many mortals, devils, angels, and other planar entities frequently traverse the area. That said, there are a few species that are, in a way, native to the Astral Sea.

Githyanki are the most aggressive foe you'll encounter in the Astral Sea. They're essentially space pirates who seek only to conquer what is not theirs, fueling their ongoing effort to hunt mind flayers to extinction. They're innately psionic, which serves them well in navigating the Astral Plane. They're also martially trained fighters, wielding incredible skill with their signature silver swords that specialize in cutting the silver cords of astral projectors. They also like to ride red dragons everywhere, which is just icing on the proverbial cake, making them that much more deadly.

Giff are hippo-like bipeds with a love for naval coats and explosions. Their homeworld is a distant memory for most, but they're drawn to the Astral Sea, most likely because their long-forgotten deity is still floating around the silver void with which each Giff still harbors a psychic connection. Encounters with them are usually friendly, but they have quite a temper if you disagree with how they pronounce their name (either with a soft g or a hard g.)

Astral elves were once eladrin long ago who ventured from their native plane of origin, the Feywild, into the Astral Sea to be closer to their gods. In a way, they've become entirely in tune with the Astral Sea, able to conjure various astral effects no matter where they are in the universe. Elves already live incredibly long, but these elves inhabit the Astral Sea, where time moves at a prolonged rate, resulting in some of these elves being unfathomably old. They're usually busy constantly inventing new ways to bide their time.

Dreadnoughts are gargantuan-sized threats that plague the Astral Sea. A dreadnoughts body is spiked, chitinous shell, two giant pincers, and a single eye filled with starlight. They predate historical records, and their origins and motives are entirely unknown. They only seek to devour everything and anyone; when they do so, whatever they swallow is deposited inside a demiplane, where anything organic slowly decays. 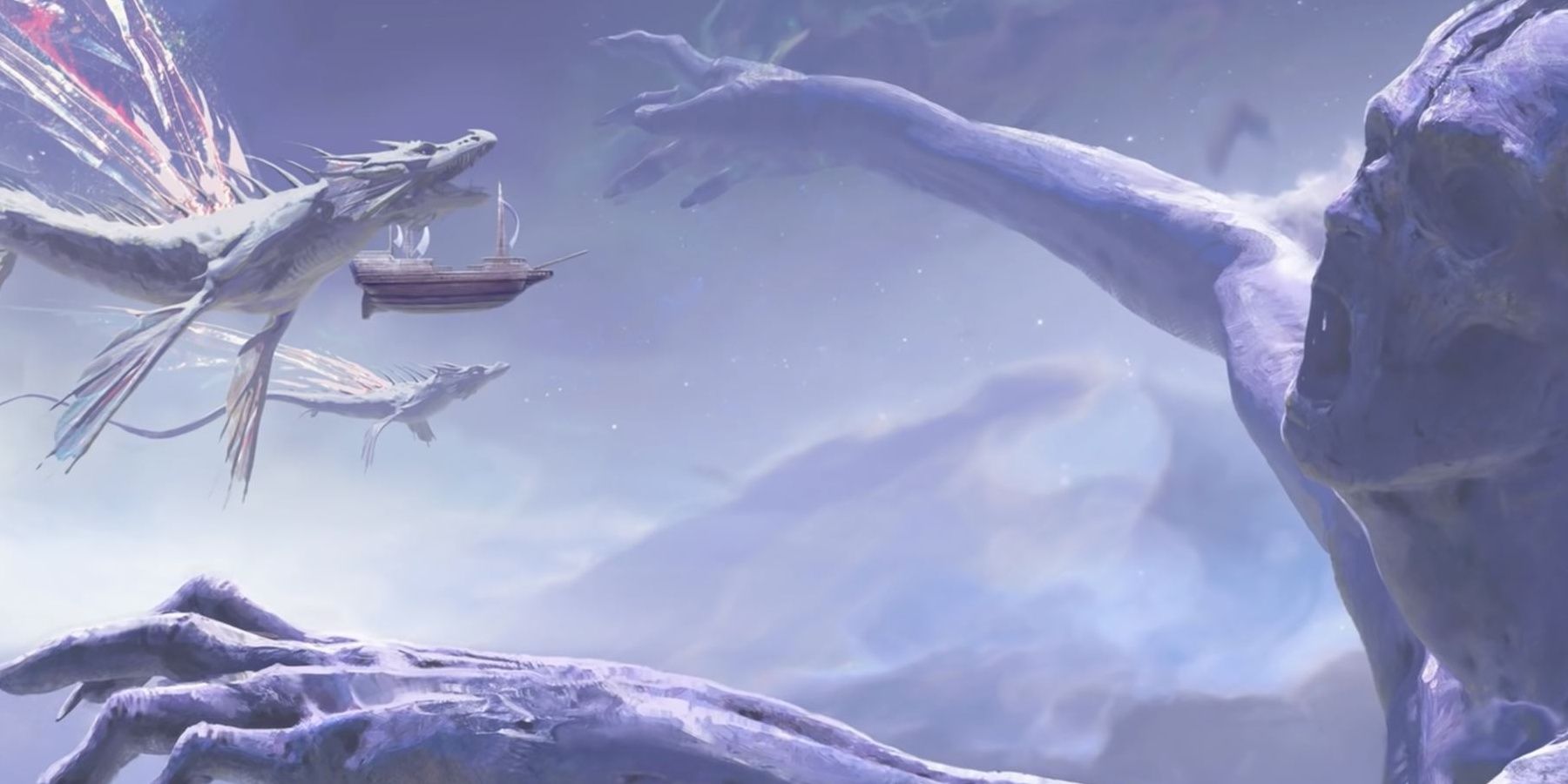 The Astral Sea is perilous but holds incredible promise for brave adventurers clever enough to take on its unique challenges. Treasures and magic from every corner of the universe constantly find their way here, beckoning new heroes to seek these wonders out for their own gain. Better still, mastering this realm and its tricky traversal becomes a boon in the pockets of anyone, as virtually every location, divine and mundane, is at your fingertips. In the realm of thought, one need only first imagine the possibilities to find that they've already arrived at the next great adventure.