When Dwarf Fortress mined its way onto the gaming scene in 2006, it kicked off a colony sim genre that has since created several popular successors. Rimworld is one such successor that has risen to the forefront of many players' minds when it comes to this genre. Like Dwarf Fortress, it features a procedurally generated map, and a set of inhabitants that you are encouraged to guide and protect.

The question that many players are left with is which is better? In all honesty, it depends on what you’re looking for. The games have such complex systems that it makes strictly placing one above the other a dicey affair. In this friendly rivalry, each game has its own strengths that give them an edge. 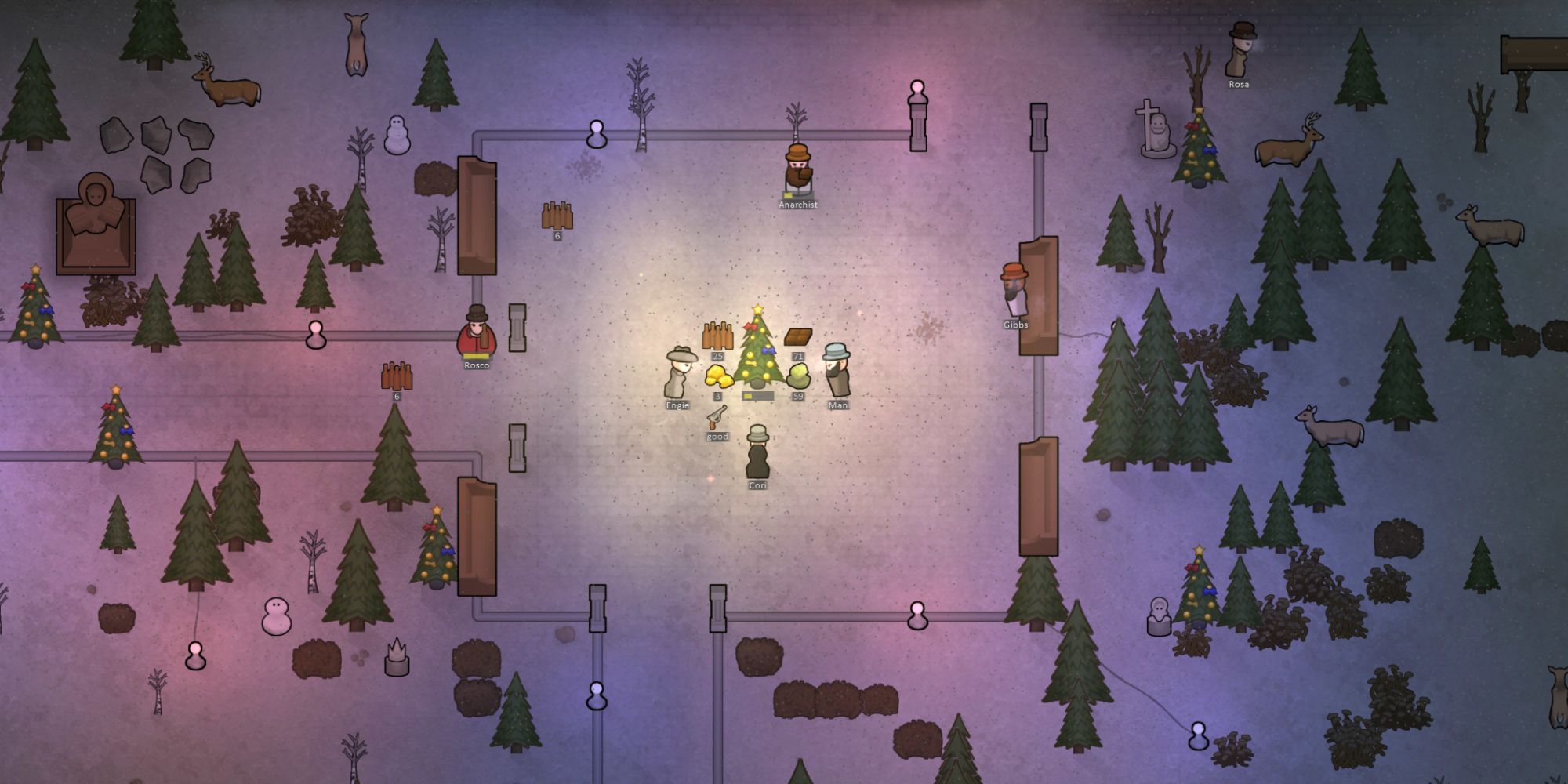 In Rimworld, colonists otherwise known as ‘pawns’, are the quirky inhabitants of your settlement. Each one has a diverse set of stats, backgrounds and passions that make them adept at certain skills. You can have a social worker who refuses to commit acts of violence, or a drug addict who happens to be great with animals.

While it’s true that Dwarf Fortress dwarves have their own deep layers of personalities and backstories, they ultimately fade into the background of gameplay unless you decide to focus on them. Rimworld pawns are directly affected by their diverse biographies, which is critical because each pawn usually becomes a backbone of your colony's infrastructure. The death of your farmer can be a devastating blow for your entire food supply. In contrast, individual dwarves can feel a little expendable. They arrive at your fortress in big waves, and can easily become one of many others. 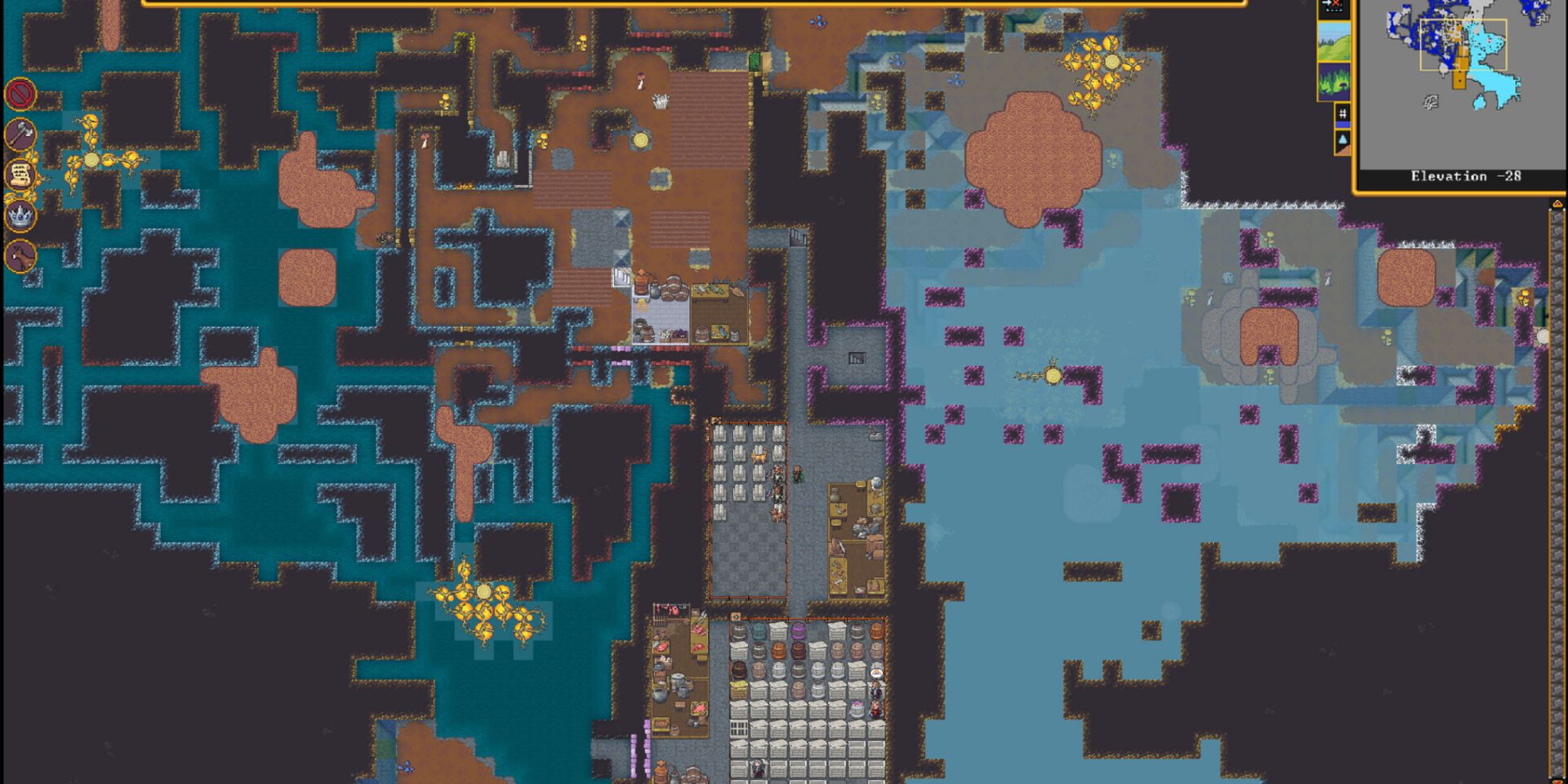 Dwarf Fortress has been praised for the extent at which it can simulate dwarven life into gameplay. Creator Tarn Adams once described how fixing a bug related to drunken cats was all connected to feline personal grooming and alcohol poisoning mechanics. Dwarf Fortress simulates details down to the blinking of eyelids, and the complexity can be impressively staggering. Each other faction on the map goes about their lives, and their interactions with you are with purpose.

Rimworld on the other hand, simulates events through the use of an AI narrator. This makes events have a touch of randomness to them, as they are dictated by difficulty and colony prosperity. The Randy Random narrator takes this to an extreme, and will throw whatever he wants at you at any time. While it doesn’t necessarily take away from the fun, it feels particularly ‘gamey’ compared to the cause and effect simulation of Dwarf Fortress. 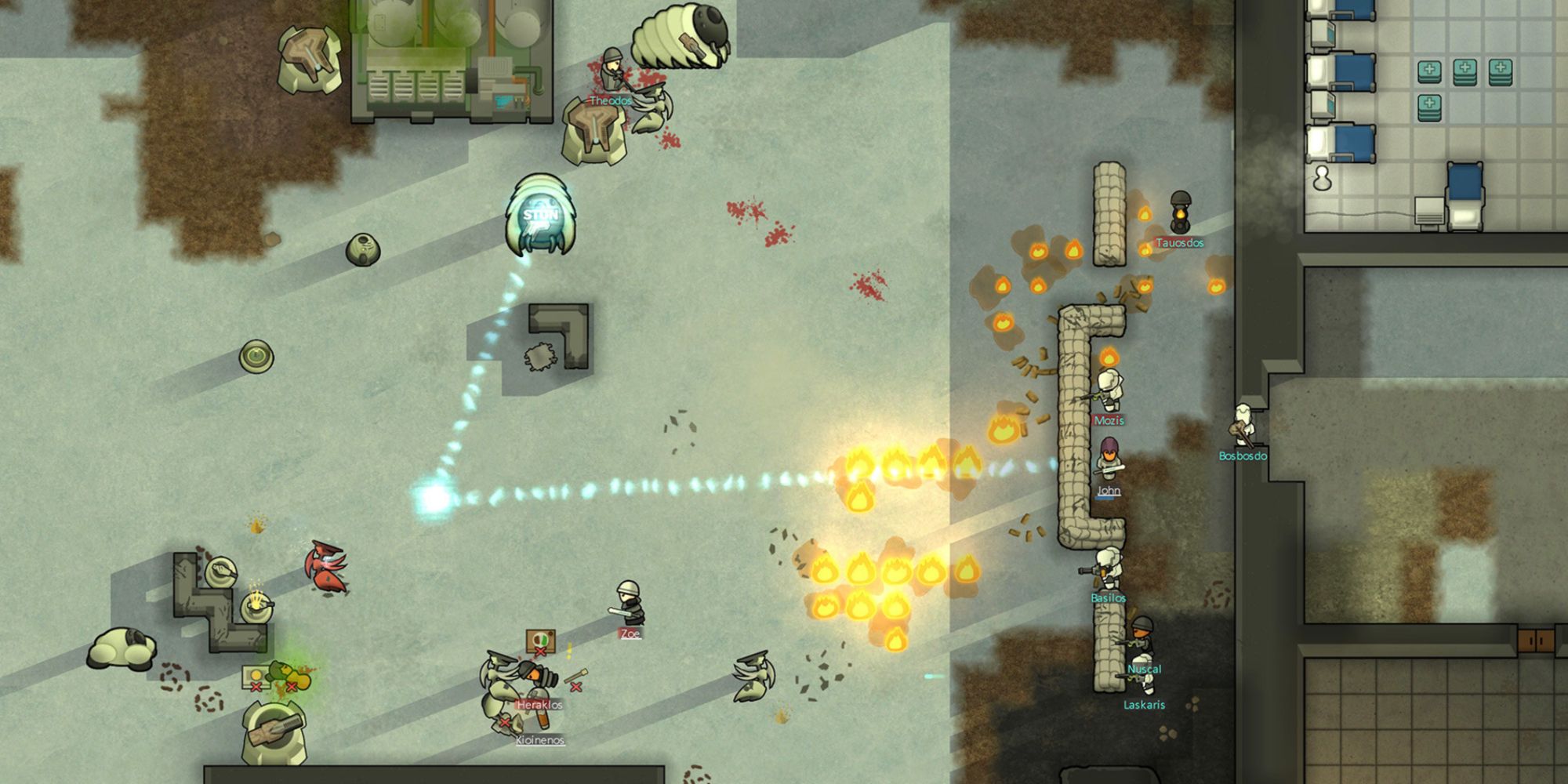 This can be a bit of a toss-up, as both Dwarf Fortress and Rimworld feature detailed combat logs and body part systems. However, Rimworld has the edge due to playability and visual appeal. Individual Pawns can be drafted at any time to follow direct orders, including who to fire at, where to move and what weapon to use at any given moment. There are also nice animations for explosions and gunfire. During intense raids, Rimworld can often feel like a real-time strategy lite game. While Dwarf Fortress certainly has a more complex combat model, it can feel rather hands-off when it comes to the actual fighting.

Dwarves can be directed towards the fray, but once steel starts to clash you lose agency over what they do. Instead, the results are simulated based on a huge variety of factors, including enemy type, equipment and sometimes luck. All this to say, Dwarf Fortress places less of its focus on the combat itself. Instead, it serves as another layer to create an interesting story. 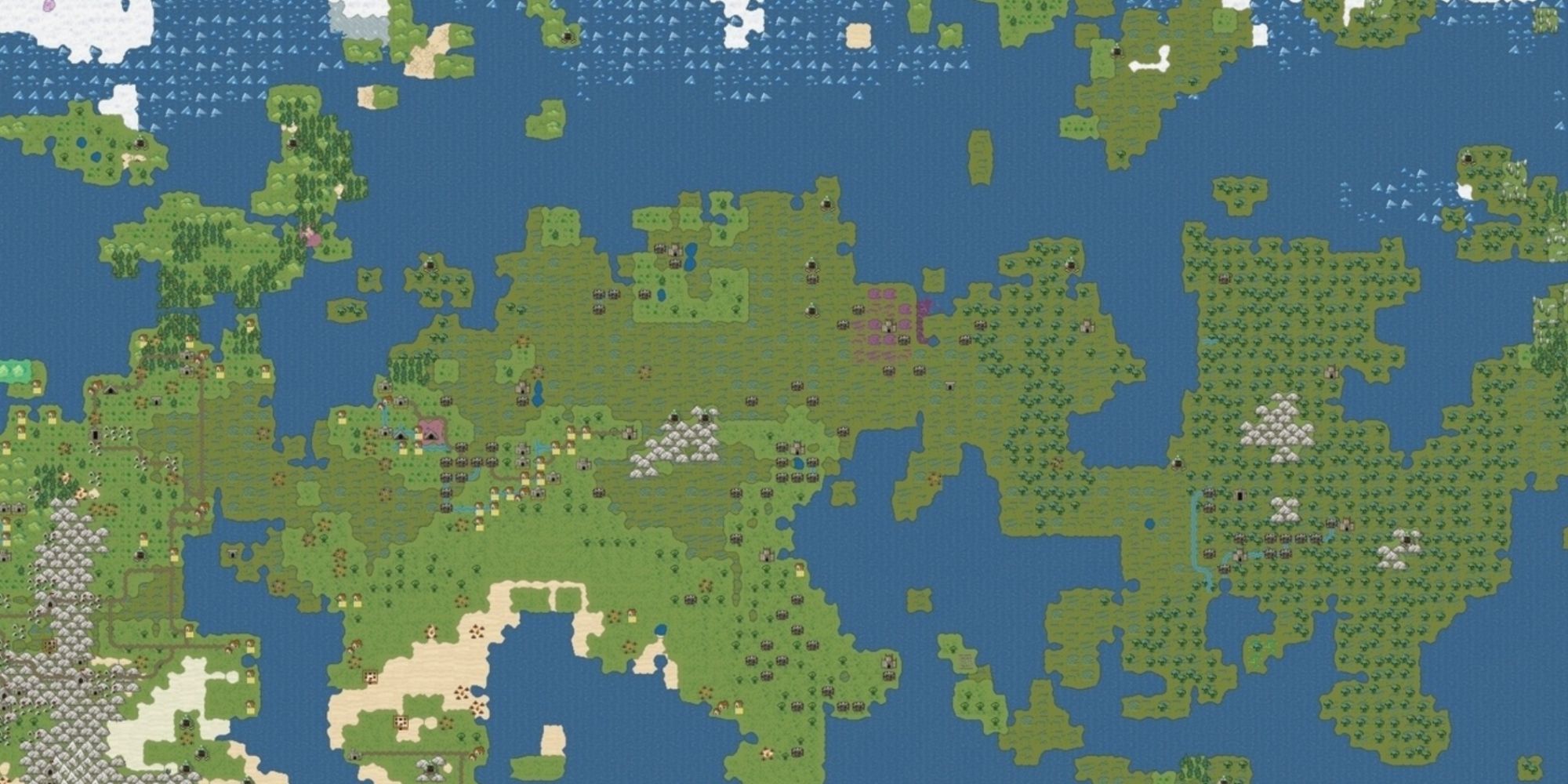 Storytelling is the heart and soul of Dwarf Fortress. While both it and Rimworld stake a claim over being story generators, Dwarf Fortress takes the crown. There are thousands of stories online about the fun misadventures players have had while trying to maintain their fortress. Rogue elf dancers, mischievous necromancers and devastating lava floods are just part of the day-to-day life of a dwarf. Rimworld tries to produce stories through the random events of the narrator, but it never feels as organic as Dwarf Fortress.

That’s part of the magic that Dwarf Fortress has. Each story regarding the course of your fortress manages to sound both plausible and completely wild. This can be attributed in large part to the painstaking attention to detail of its simulation. When the game starts, an entire history of the world is written and played out. Civilizations rise and fall, and they all have an impact on the world you load into. 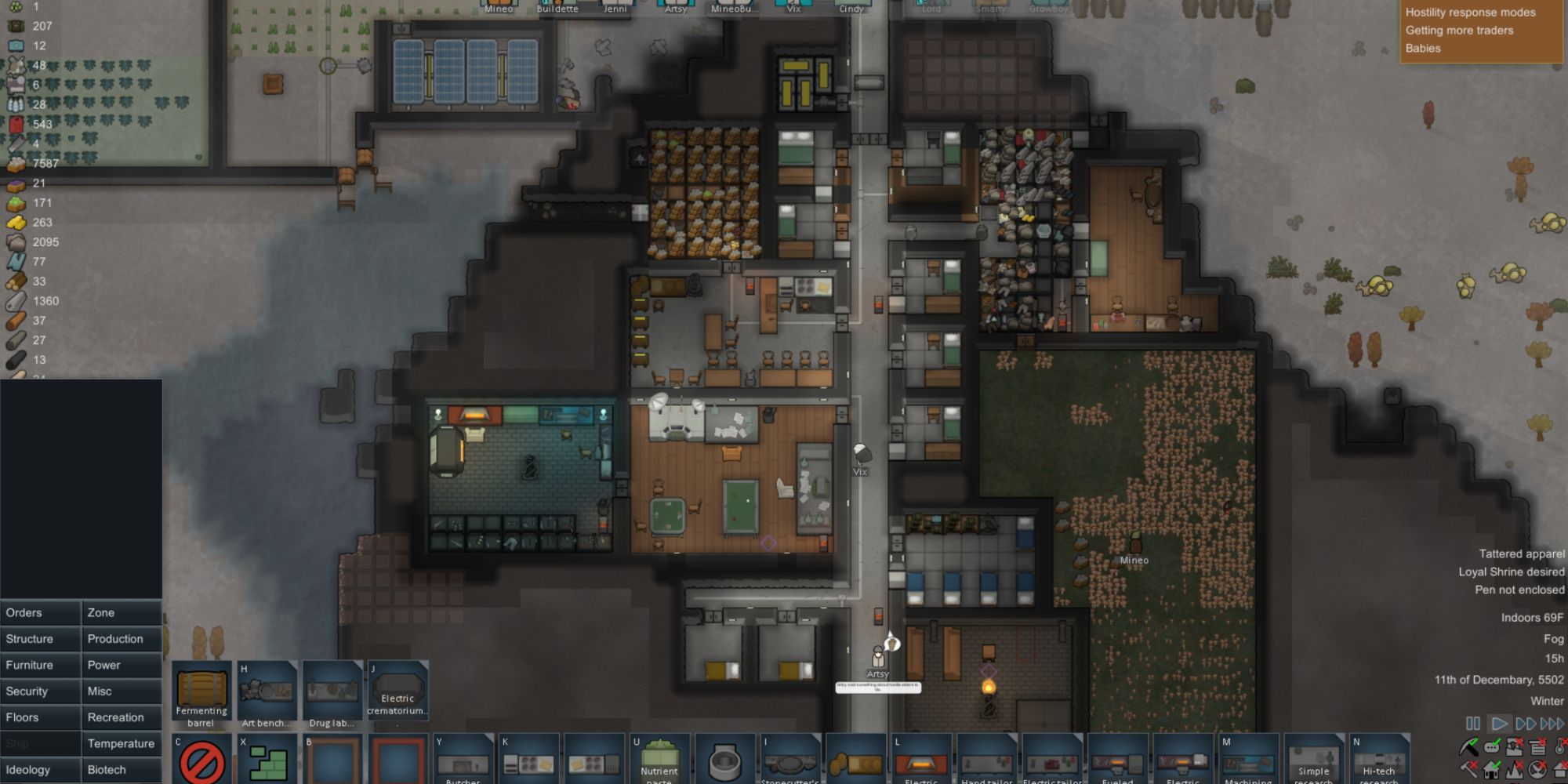 Complexity always comes at a cost, and it has made Dwarf Fortress somewhat infamous for being hard to get into. The Steam Release brought some much welcome accessibility in the form of graphics and mouse support, but for players new to the genre, it can still be very overwhelming. In contrast, Rimworld has managed to remain more user-friendly from the get-go. It was designed like a more modern approach to Dwarf Fortress, and gives players more control at the expense of complexity.

Each action has sound effects, there are more animations, and the ability to draft and control Pawns really helps to get them out of tight spots. The graphics are also more in depth, which really helps to visually process everything that's going on. The UX design is also easier to navigate, as most menu options can easily be reached with one to two clicks without backtracking or needing to memorize keyboard shortcuts. 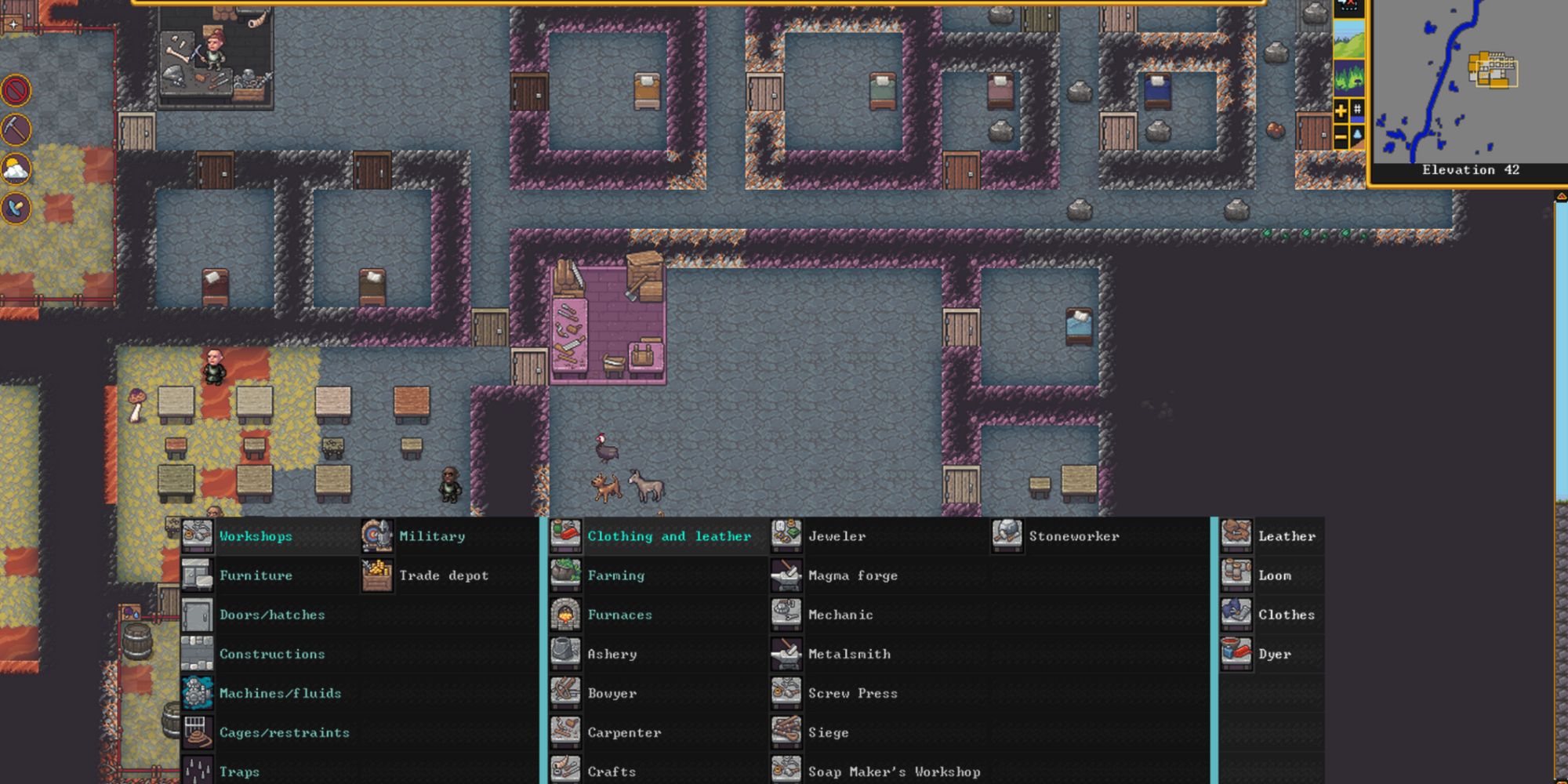 Dwarf Fortress has a massive list of buildable structures covering every aspect of settlement infrastructure. There are multiple complex supply chains that can be established, such as the creation of clothing through the weaving of plant fibers into cloth. Rimworld is more simplistic, often only requiring one or two steps in order to produce items.

Dwarf Fortress has all building options unlocked from the start, and you have complete freedom over the structure of your fortress. Rimworld is more limited, and you must research a huge tree of technology to slowly unlock more options. Rimworld also does not feature multi-story bases like Dwarf Fortress. You are locked into using the X and Y plane, so any dreams of towering bases or deep underground dungeons are dashed. 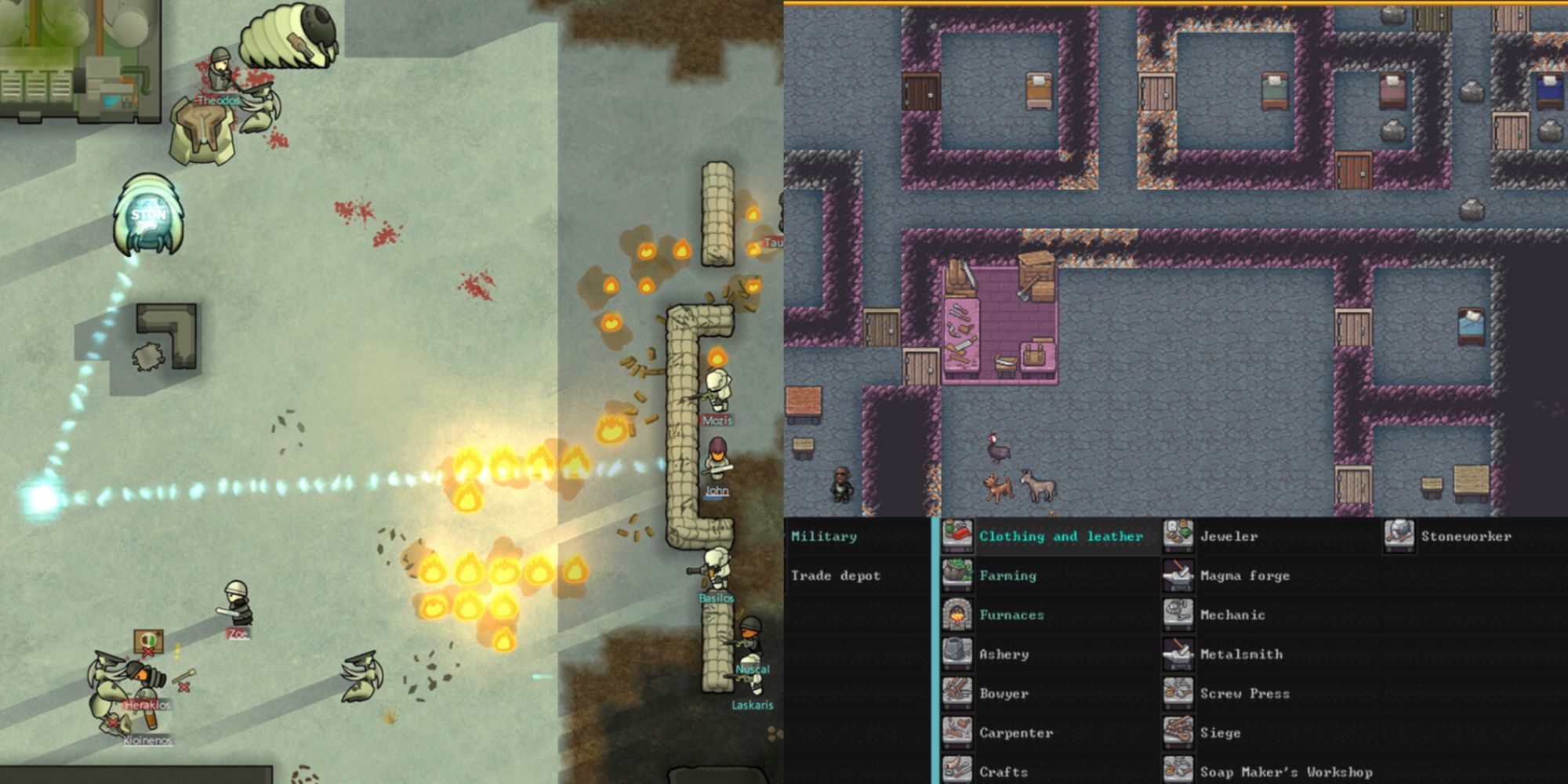 This might feel like a bit of a cop-out, but both Rimworld and Dwarf Fortress are great games that will attract players based on what they're looking for in the genre. If you want a masterfully complex simulation system at your fingertips with the potential to grow a deep and sweeping narrative, Dwarf Fortress is definitely your cup of tea. But if you want the more modern take on the genre that is both more engaging in terms of combat and just more approachable overall, Rimworld should be your first and only stop. It all depends on what you want!