To say that Earthbound is a weird game would be a bit of an understatement. Some of the enemies you fight include evil hippies, sentient street signs, and living hieroglyphics. The entire police force of your small town attempts to beat you up just so you can get past a roadblock. You stop a zombie uprising by placing flypaper-esque Zombie Paper on the floor of a circus tent. A man turns himself into a giant, living dungeon for fun! So yeah, it's pretty peculiar.

It's because of Earthbound's odd world and gameplay mechanics that some players may find themselves stuck at certain points in the game. One of the moments that may confuse new players occurs shortly after leaving Threed to head to Saturn Valley. The way to progress past this spot and get behind the waterfall is so unorthodox that many may never find the solution. That's why we have this guide to show you how to make it inside the secret waterfall base (which isn't so secret anymore.)

How To Get Behind Grapefruit Falls

After you lay down the Zombie Paper and catch some zombies, you can progress through the cemetery in the northwest section of Threed. There will be a ladder descending into an underground area. Once you get through the area below and defeat the Mini-Barf mini-boss, you'll come out into a nice clearing beside a river.

Now if you don't go through the entrance to Saturn Valley and continue to the north, you'll find a waterfall known as Grapefruit Falls. If you check behind it, you'll receive this message: 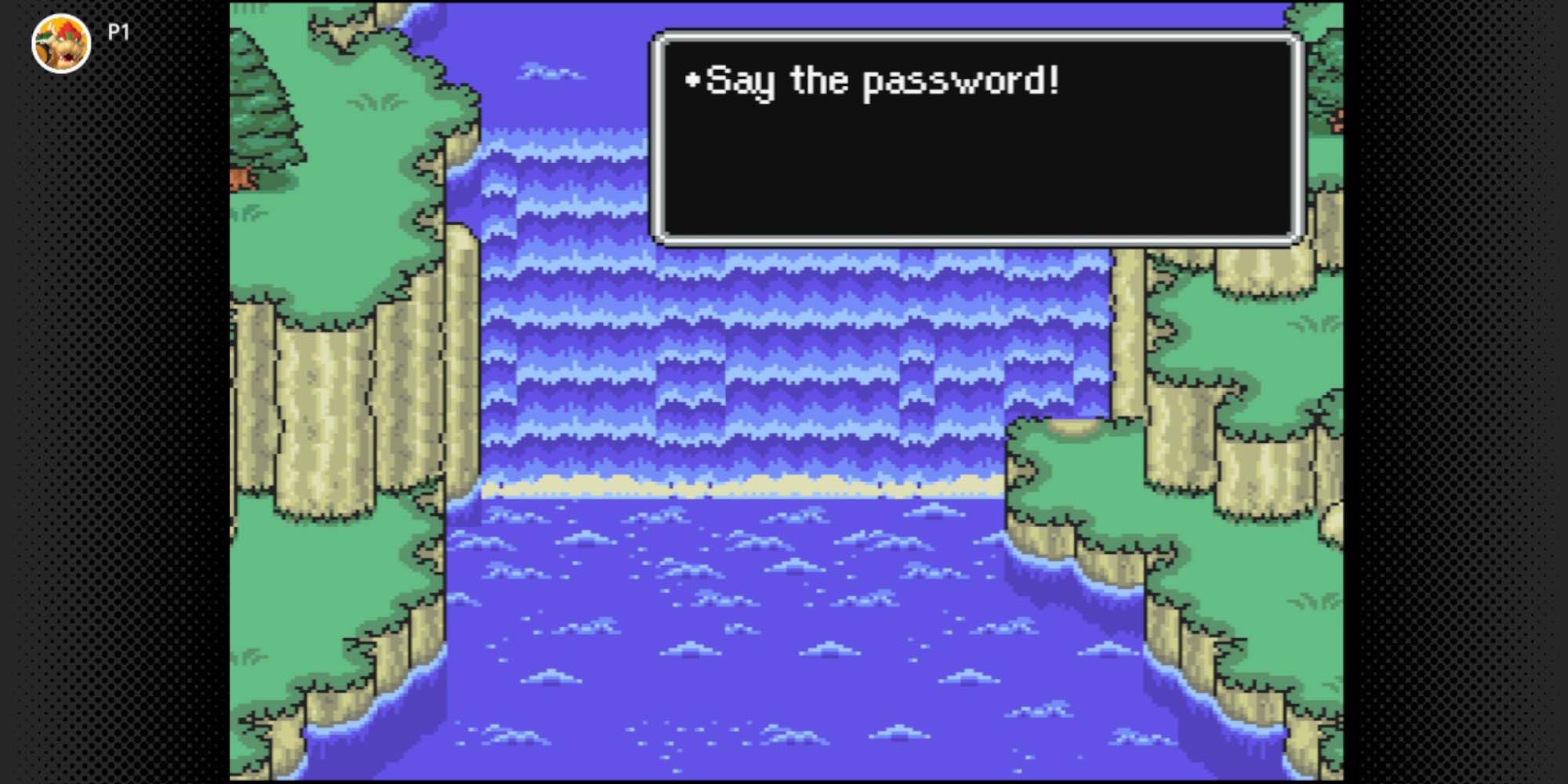 Obviously, you won't know the password and will need to find it. The answer is located within Saturn Valley where you'll be introduced to the utterly absurd Mr. Saturns. These short, squat, unarmed, ribbon-wearing weirdos are as endearing as they are bizarre. As you walk around this village, you'll see a ladder you can climb leading into an entrance. Inside you'll find various Mr. Saturns milling about.

This may not seem like an important area, but there's one Mr. Saturn here who will reveal the secret of getting into the secret waterfall base. 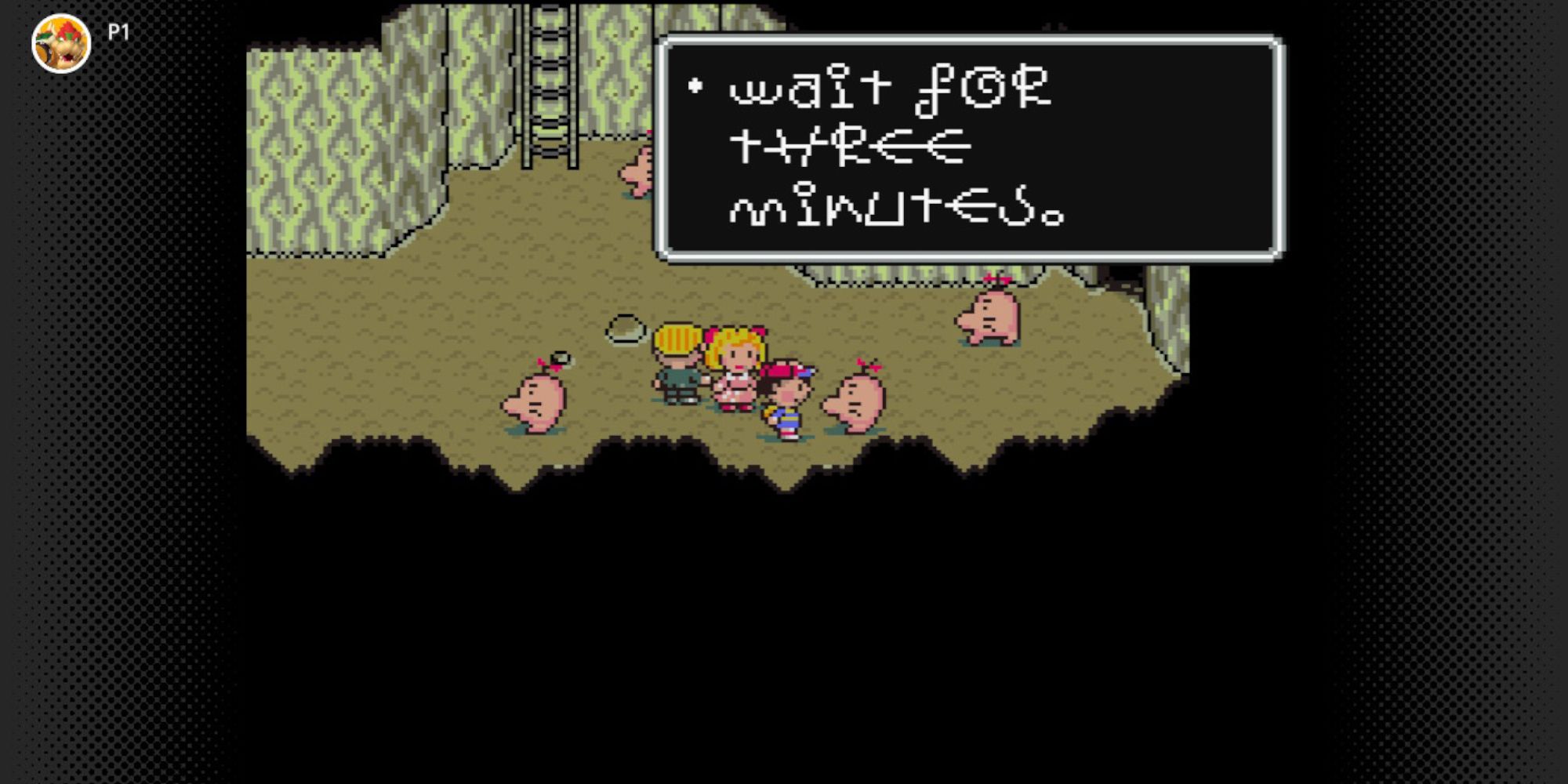 He'll tell you that a monster named Belch is holding his friends captive behind the waterfall. He'll then say that he knows the password, which is to stand perfectly still when you get the "say the password" message and not move for three real-time minutes. That's right, you have to set the controller down – or perhaps your entire Switch in this case – and just wait. It's not surprising that a lot of players may not understand what to do at this point since this info comes from a random NPC who speaks in such a ridiculous manner that you may not even realize that they're giving you the password. Especially since it's not really a password but rather an instruction to not move.

Go back behind Grapefruit Falls, get the message, wait 3 minutes, and you'll eventually get another message saying that you can enter the base. You'll then travel through an area where Mr. Saturns are being forced to produce fly honey while you fight enemies like living barf piles, flies, and whatever a Fobby is supposed to be. When you get to the end, you'll face off against the boss, which is the giant pile of barf known as Master Belch. He's pretty easy as giving him the Jar Of Fly Honey – which you should have in your inventory – will distract him for most of the battle allowing you to wallop him with attacks.

And that's how you get past the waterfall. After you defeat Master Belch, you'll be able to use the hot springs in Saturn Valley, and travel to the third Your Sanctuary location, Milky Well. You can also talk to one of the Mr. Saturns to have a very long, introspective chat over a cup of coffee.