The Black Knife Catacombs is one of the many small dungeons in Elden Ring’s Liurna region that gives players the opportunity to hone their skills, gain some runes, and find useful items to grow their character’s overall power.

The Black Knife Catacombs is a particularly interesting variant of the catacomb style dungeon that you can find throughout the game, offering an additional optional boss in the form of the Black Knife Assassin as well as the dungeon’s primary boss, the Cemetery Shade. From these bosses, two pieces of useful loot can also be obtained: the Assassin's Cerulean Dagger and the Twinsage Sorcerer Ashes. 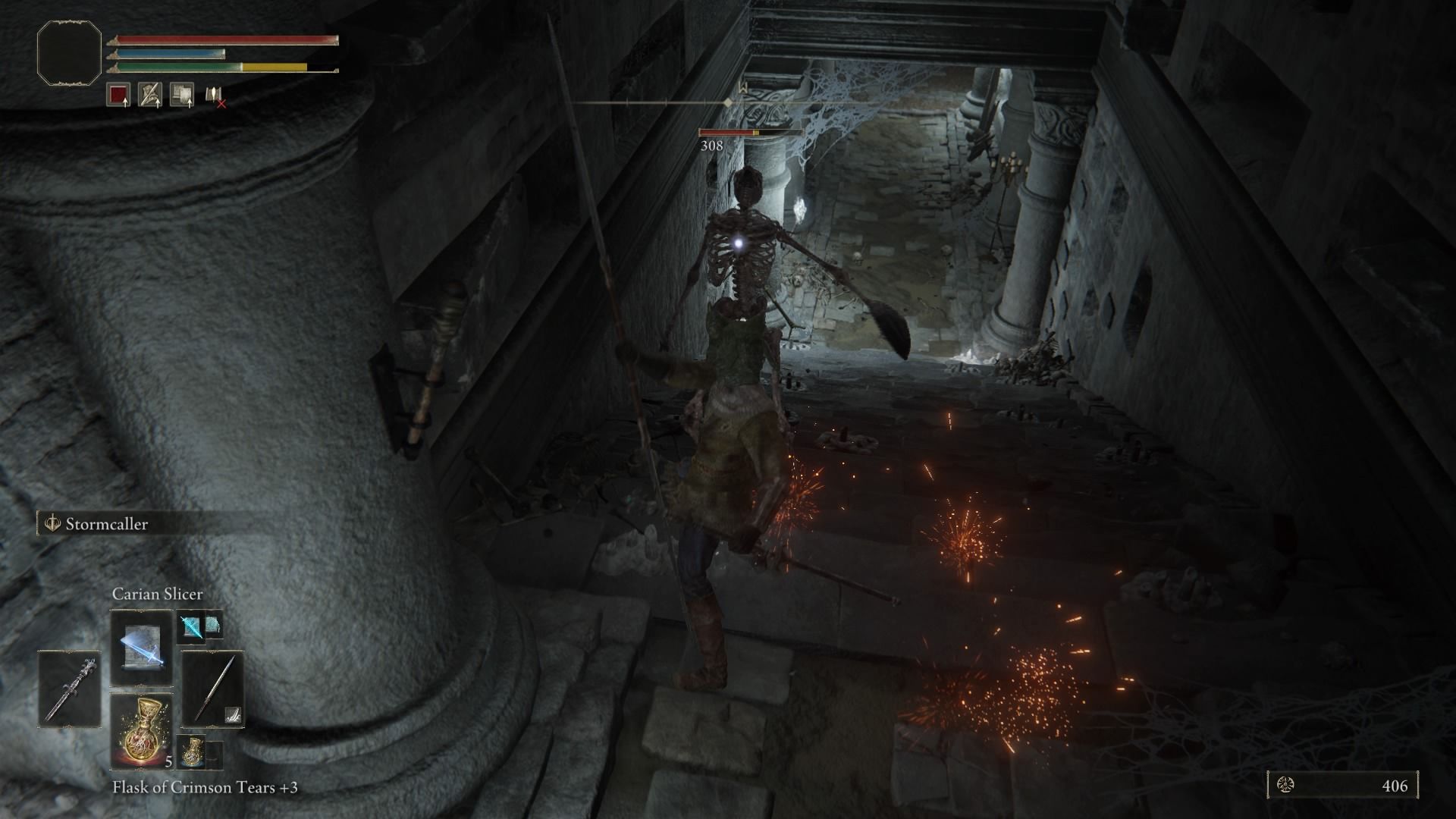 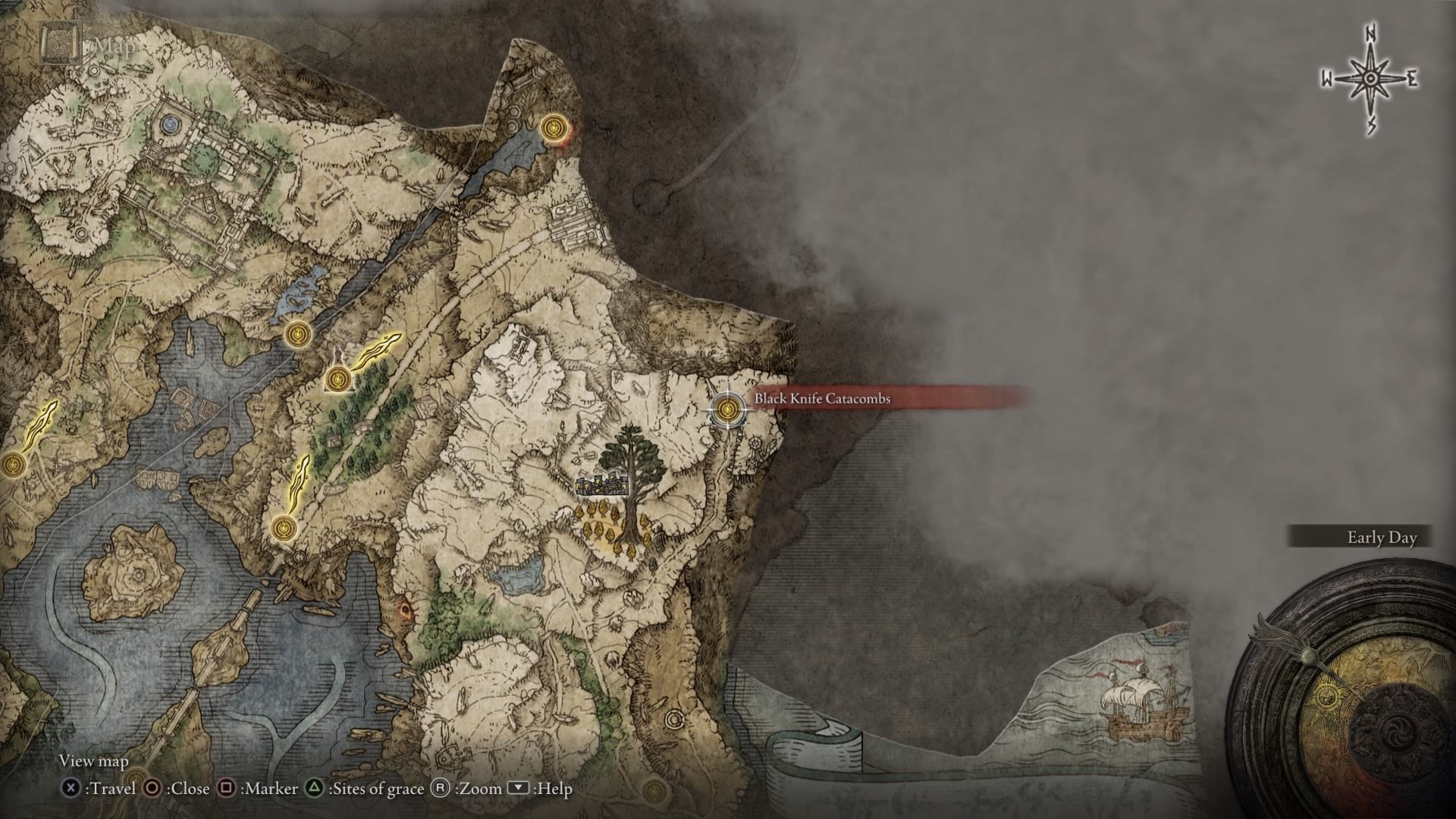 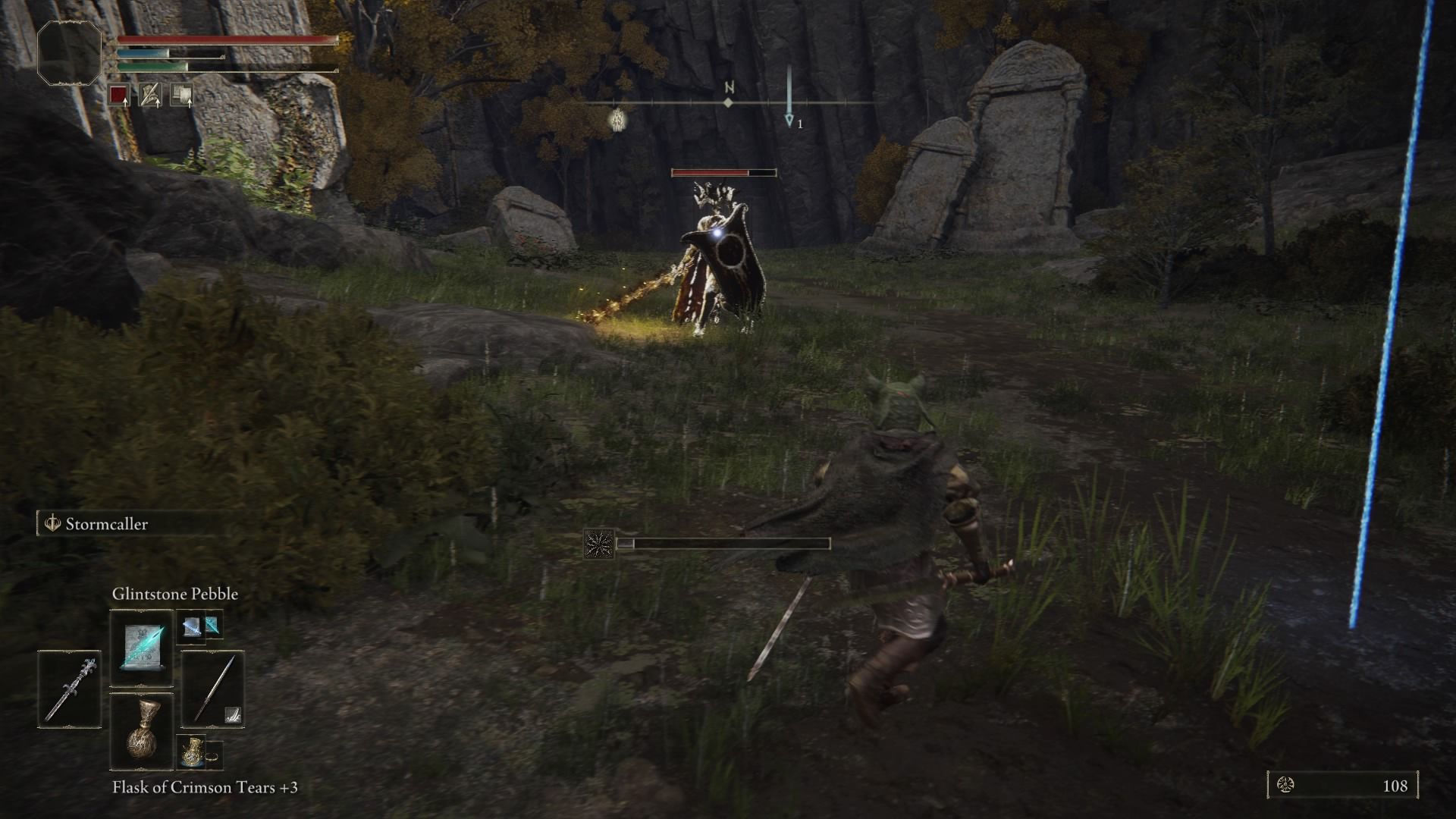 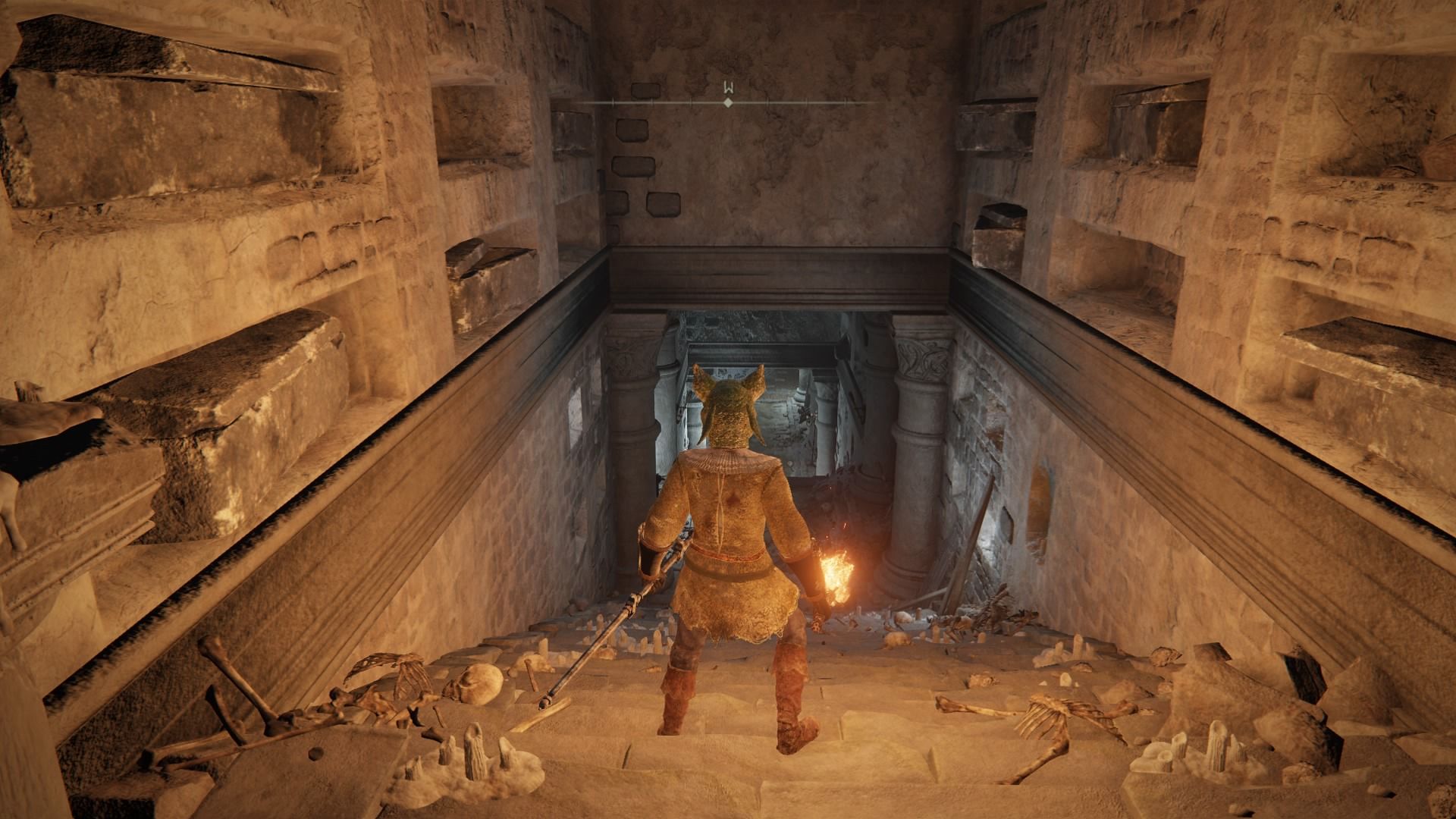 The Black Knife Catacombs will be familiar in structure to those who have already taken on the other catacombs dungeons in Liurna and Limgrave, with a few interesting twists. Firstly, this dungeon is guarded by an armored knight. Whilst it’s possible to just run past them, you’ll gain a good amount of runes and have an easier time entering the dungeon if you defeat them first.

Secondly, this dungeon is filled with standard skeleton enemies that can only be fully defeated by killing a nearby necromancer that is summoning them. Be aware that for this reason, there are lots of skeletons that will rise continually after being down until the nearby necromancer is defeated.

As with the other dungeons, you'll be looking for a lever near a statue to progress to the final boss, the Cemetery Shade. Towards the end of the dungeon, however, an illusory wall can be unveiled to reveal a mist wall to another boss: the Black Knife Assassin. 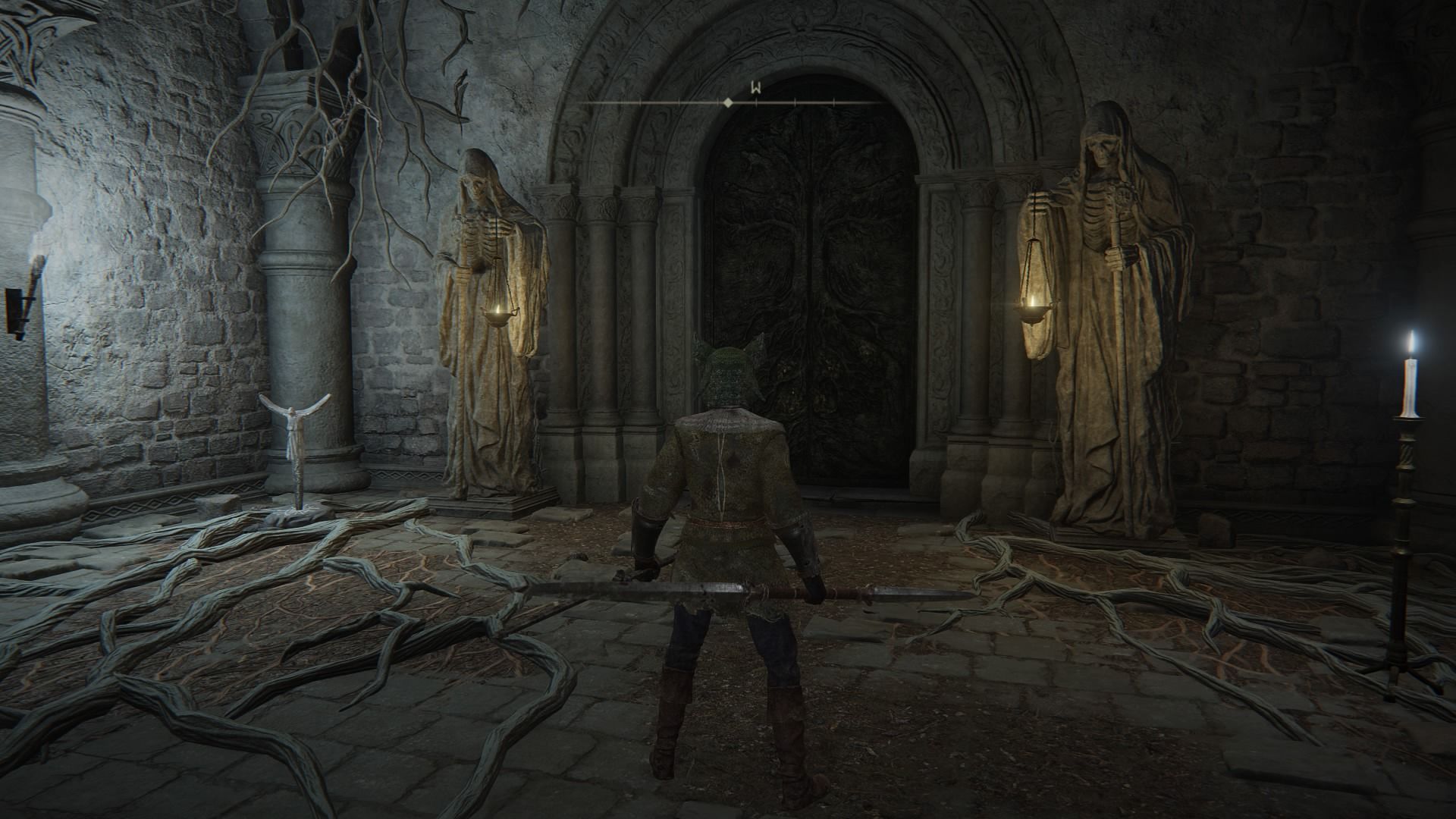 Beyond the site of grace, continue onwards and find the door between statues. You’ll need to return here later to fight one of the bosses. 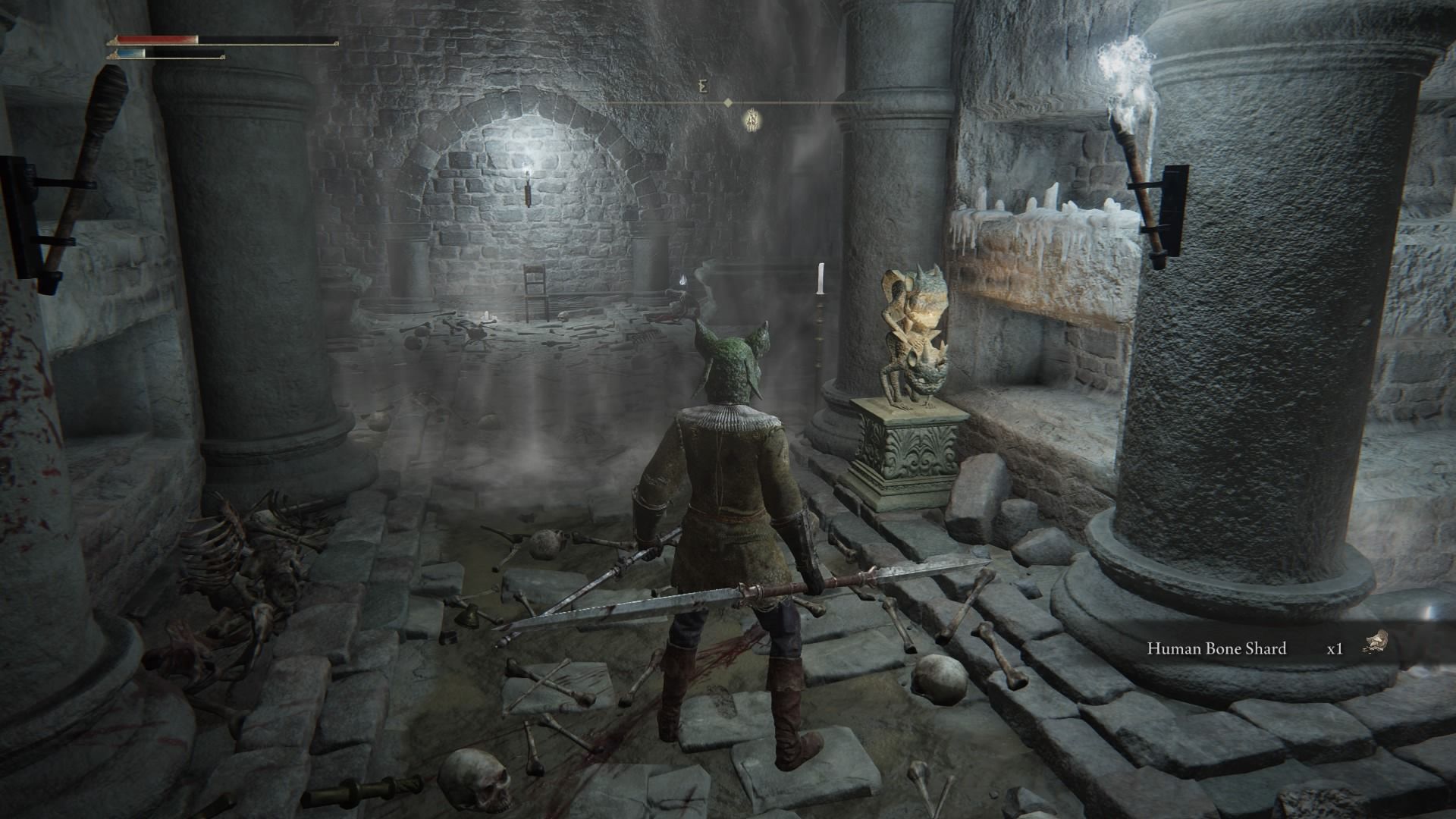 Head forward and kill the first skeletons and/or the necromancer summoning them who is further down the corridor. You’ll come across a gray mist wall that can be opened with a Stonesword Key to find the Rosus’ Axe weapon. 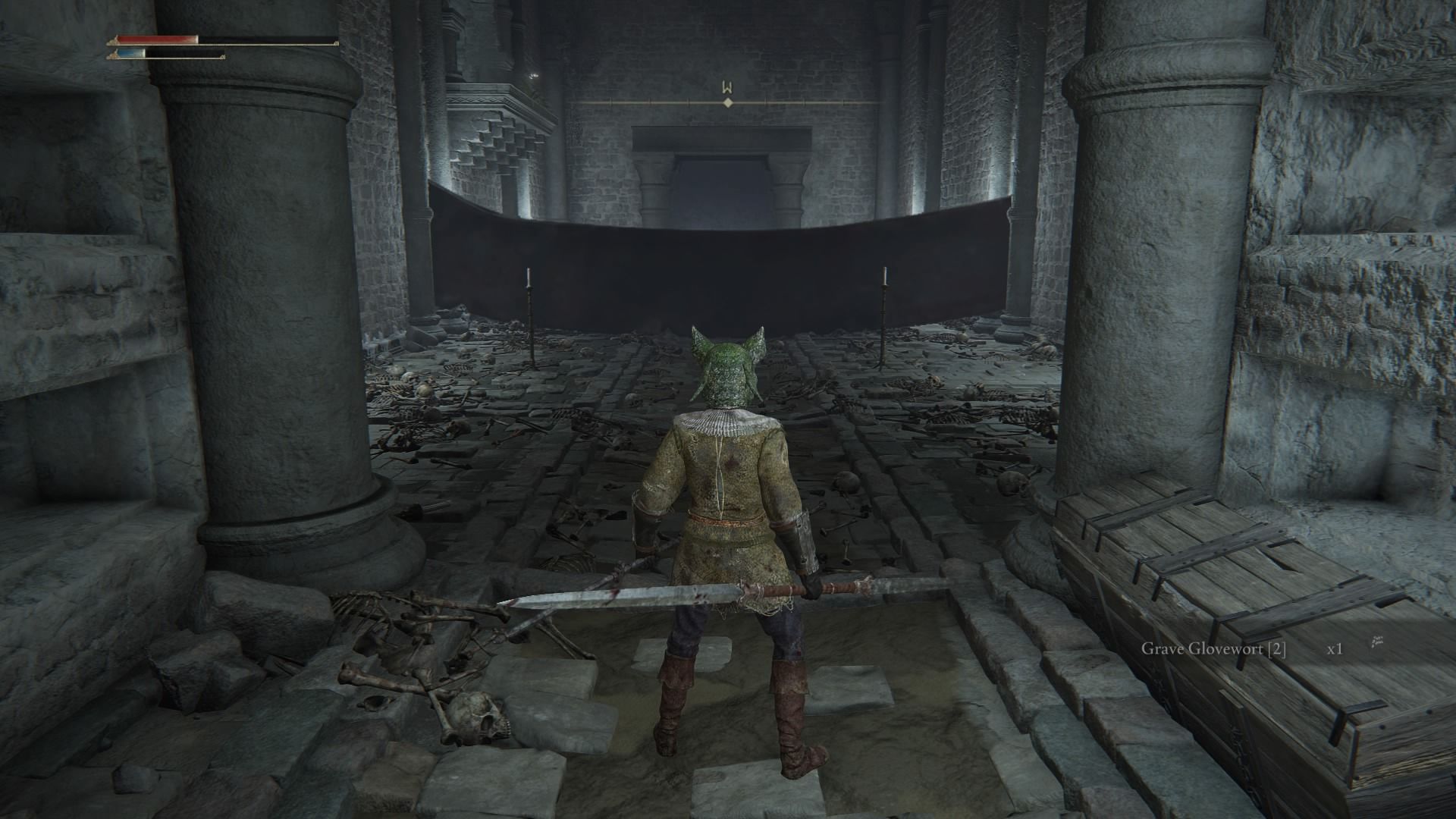 You’ll soon reach a room with falling and rising guillotines. You’ll need to time the act sprinting or rolling underneath them well, and watch out for the skeletons with bows on the other side of the room, as these enemies can hit you with arrows and knock you into the blade. You can take them out with ranged attacks first before you commit to rolling through. 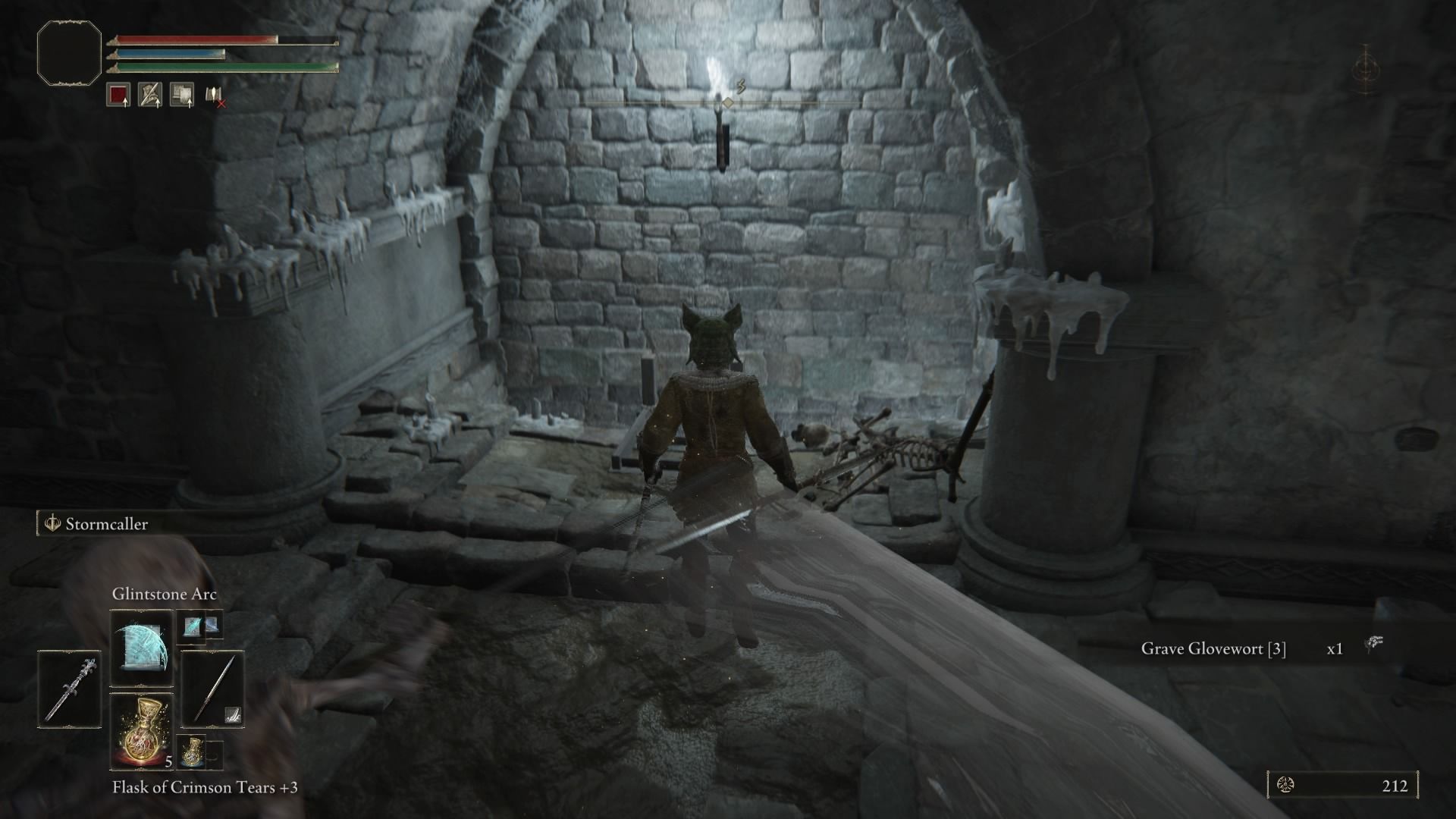 Find the ladder and descend after defeating the skeleton in this room. 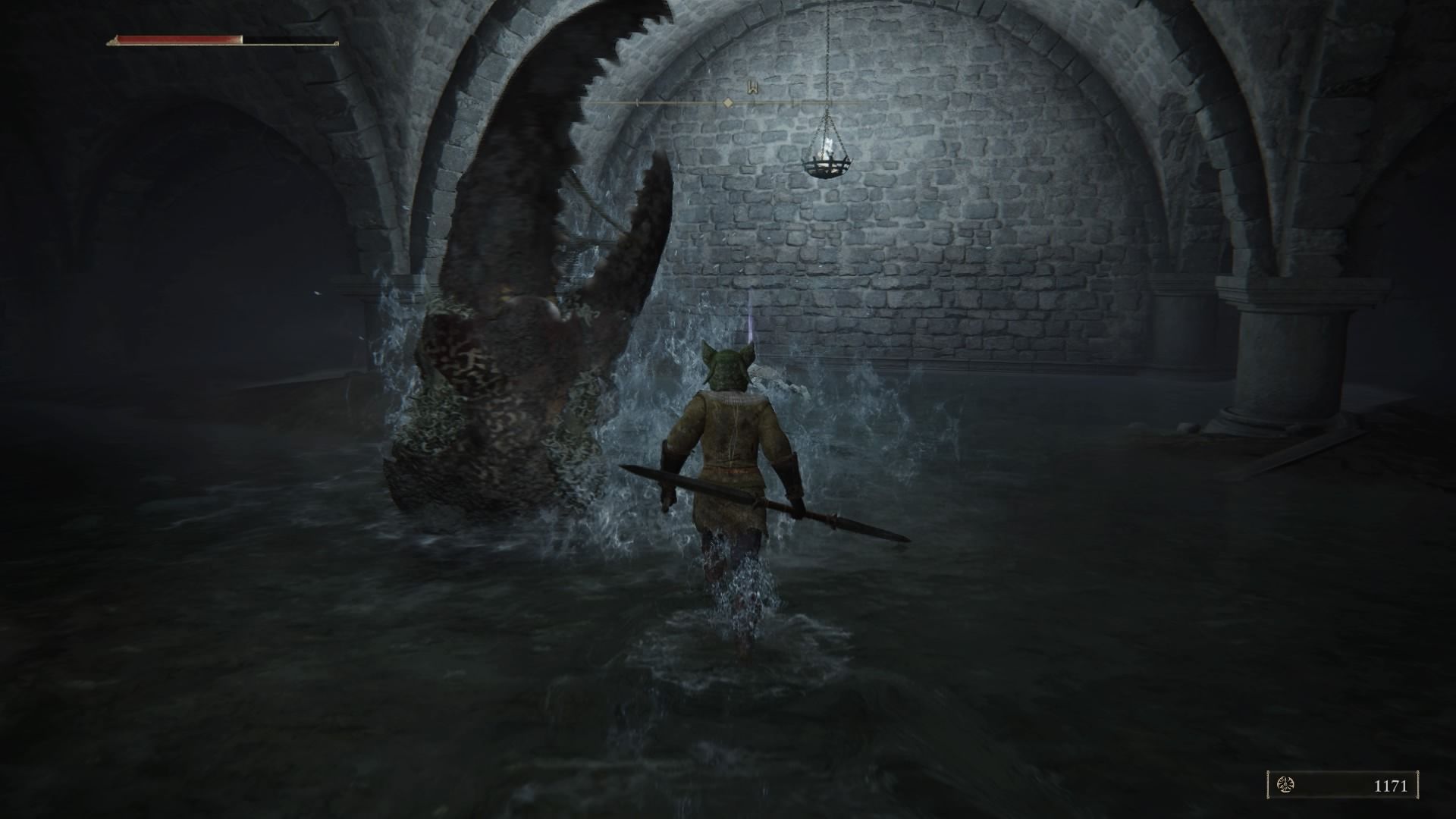 After descending the ladder, you'll be in a watery area. There are a lot of small crabs that can be one-hit in this room to harvest for runes, as well as a few skeletons. If you move to the right into the room with an item on a corpse, two giant crabs will immediately pop out from the water. Dodge roll when they swing their claw downwards and move around, so you don't get cornered by them. 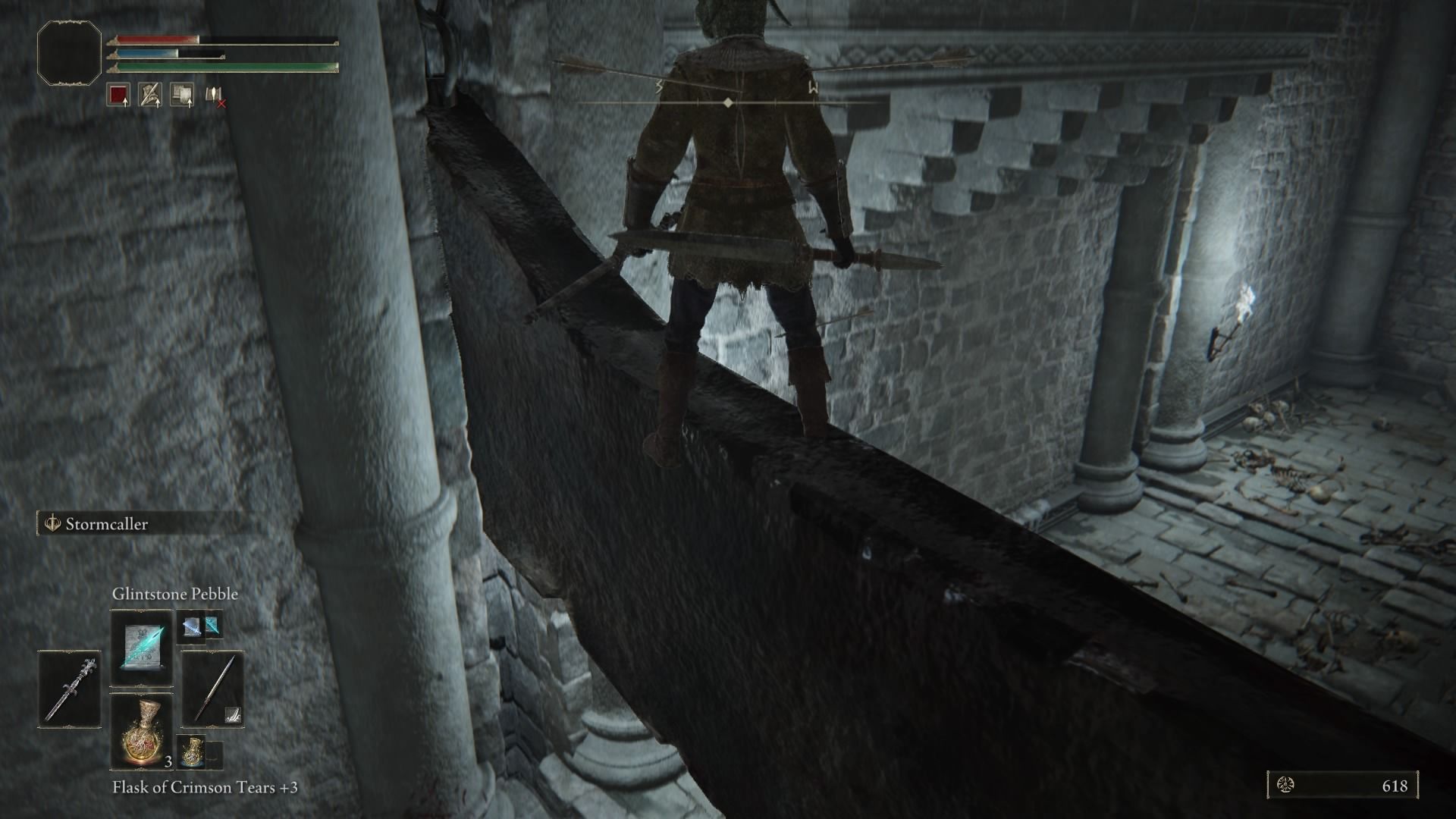 Once the crabs have been killed, go back up the ladder and return to the guillotine room. Examine how the guillotines move. Wait for one of the ones in the middle to fall down, then stand over the gap where it will rise up, lifting you with it. This will allow you to roll off and onto a ledge and into the upper level. 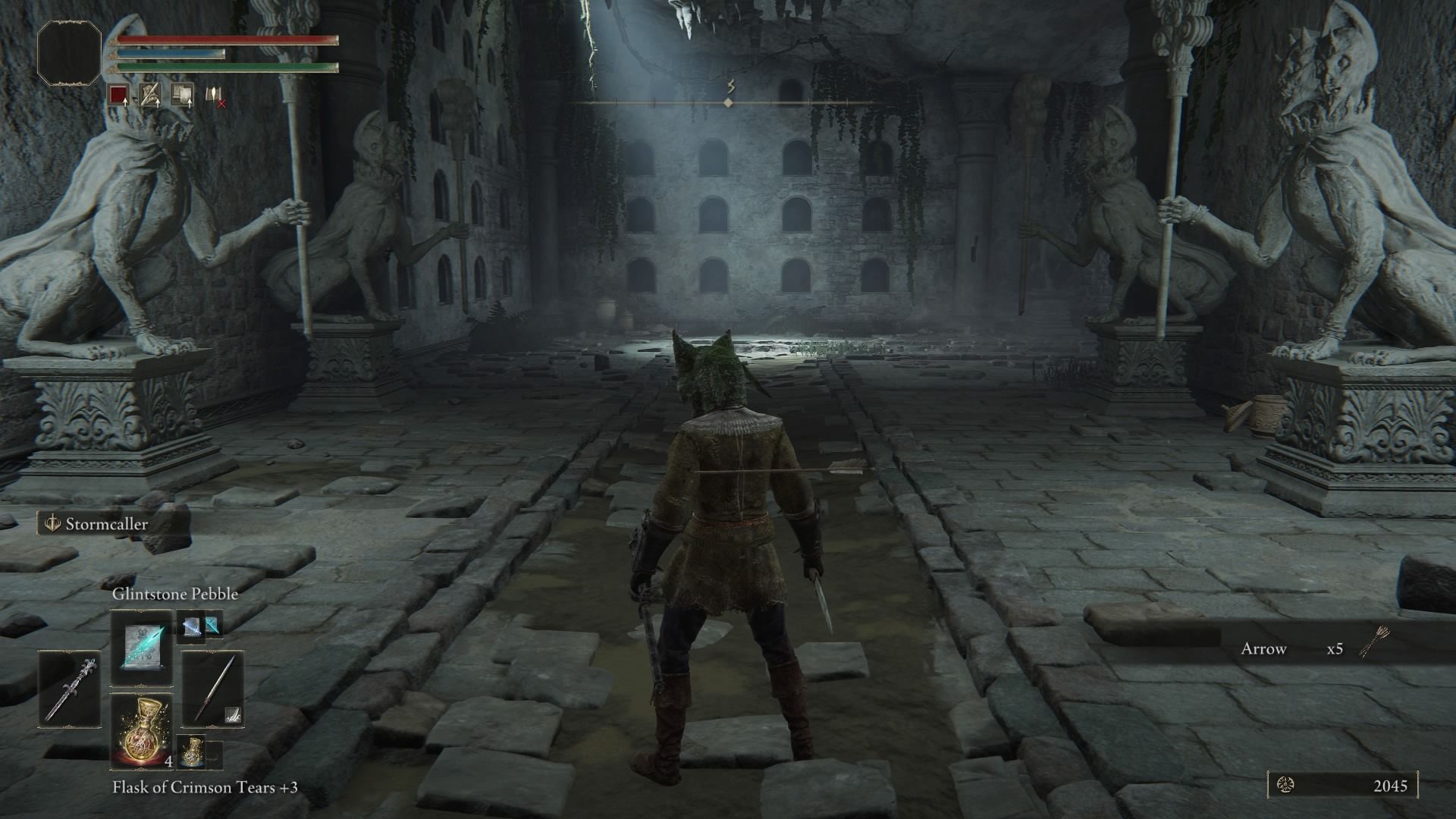 Find the necromancer in this wide room with the statues to get rid of all the skeletons at once. Continue on to the next room. 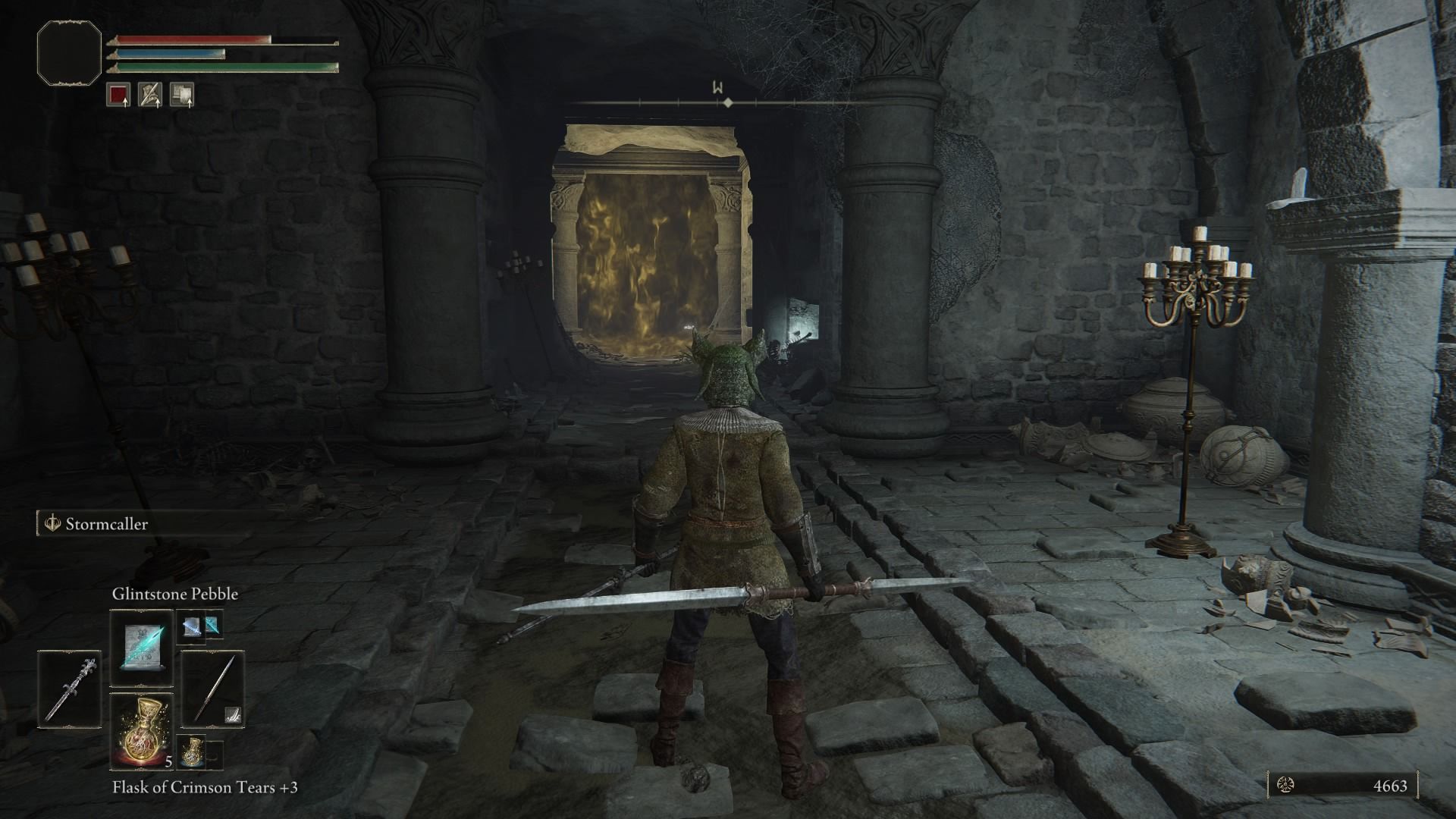 From here, you have two choices. After dispatching the skeletons, you can go down the small gap on the right-hand side of this room, which will drop you back down to the watery lower level on the other side of the locked cell you may have seen earlier. From here, you can pull the lever in front of the statue and return to fight the boss, Cemetery Shade.

Alternatively, you can hit the wall at the end of this room to reveal the path to another optional (much more difficult) boss, the Black Knife Assassin. You can also return to this illusory wall after defeating the first boss.

This boss functions like the other Cemetery Shade bosses that you can find in various catacomb dungeons throughout Elden Ring. This particular version creates an army of skeletons to help them out. Throughout the boss, you'll want to mostly ignore the skeletons in favor of getting hits on the Cemetery Shade, who can also ensnare you if you get too close, allowing the skeletons to attack. 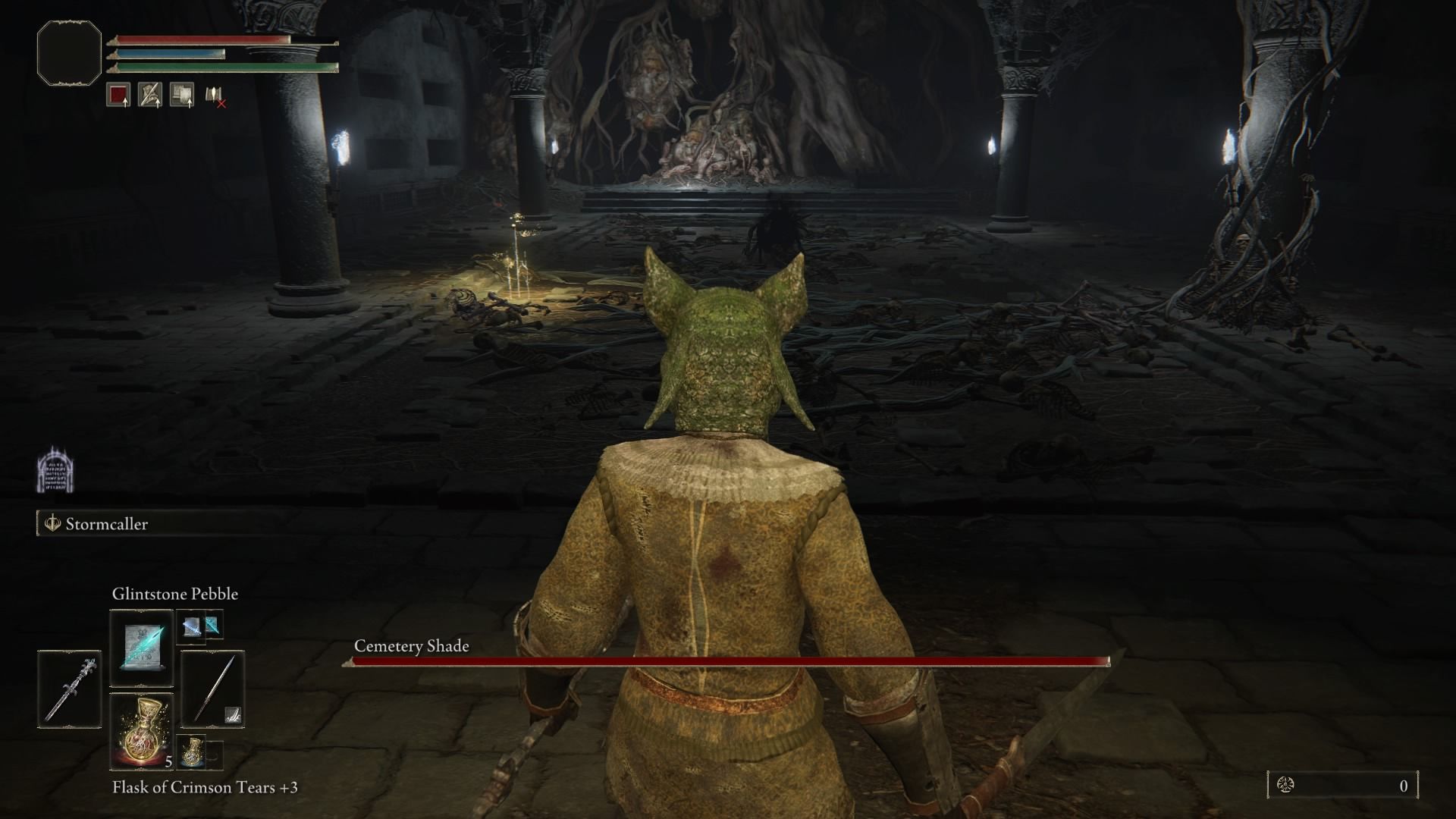 Cemetery Shade does rapid slashes with their blades in a quick combo. If you have a shield, you should be able to parry or guard counter against most of their attacks. If you have ranged attacks or sorceries, keep your distance whilst dodging skeleton attacks and use these abilities from as far away as possible. Cemetery Shade has fairly low health for a boss of this type, so as long as you don't get caught in their attacks you'll be able to overcome this boss.

By contrast, the Black Knife Assassin has a lot more health and is a lot harder to overcome. This boss will attempt to rush you with close-up attacks in addition to projectiles. 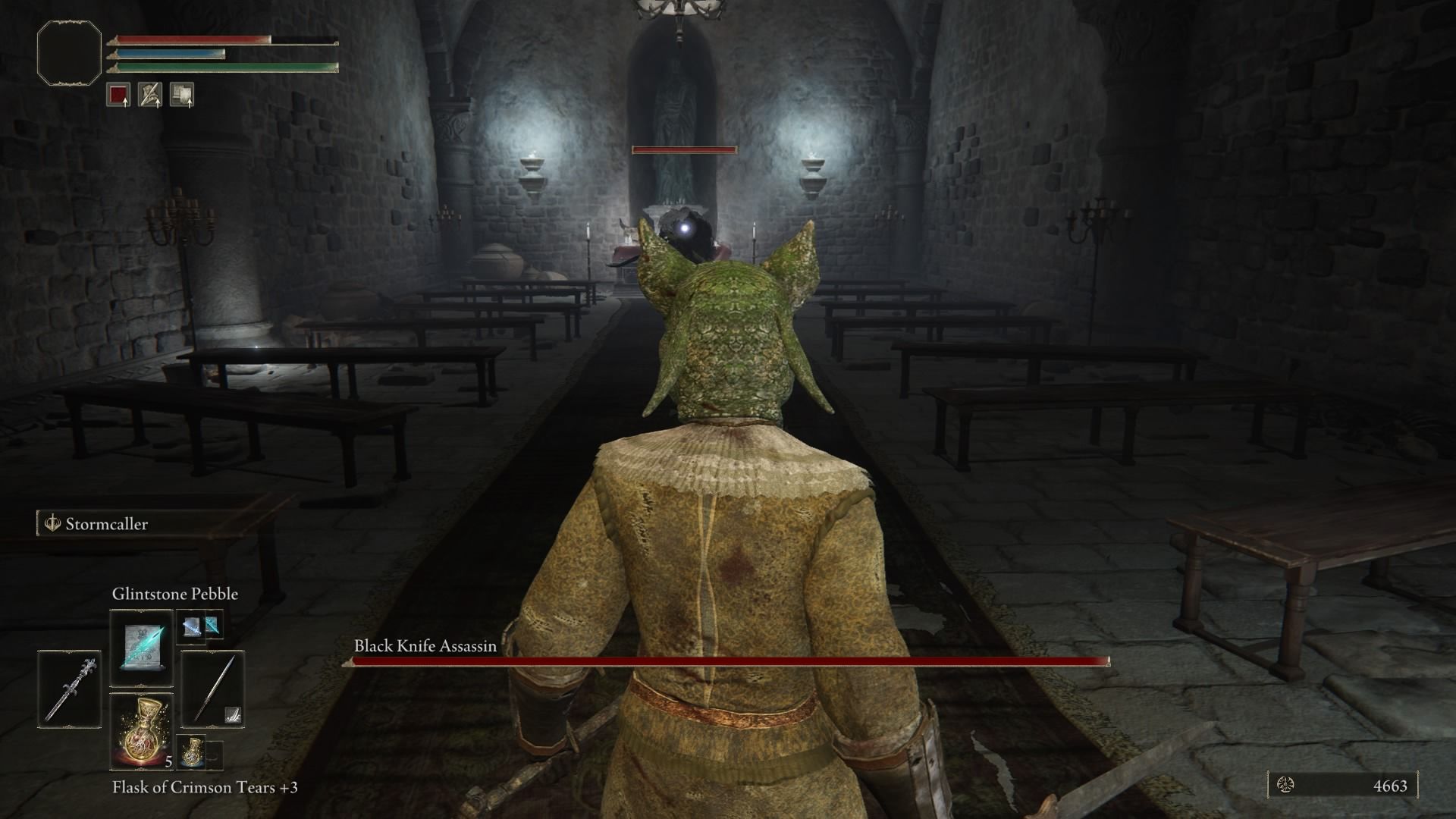 Thankfully their projectile attacks are easy to predict: when the Black Knife Assassin's arm glows red. Use this sign to plan accordingly and punish them during their projectile's animation. Their melee combo startup animations are a bit harder to spot, but can be dodge-rolled in order to get behind the assassin and attack as they lunge forward. They can be parried, but your timing has to be perfect as they are very fast. Once they're defeated, they'll drop the Assassin's Cerulean Dagger.