The Cleanrot Knight in Elden Ring is a challenging boss fight you may encounter twice, but that’s not the only time you’ll run up against these fierce foes. The Aeonian Swamp in Caelid is full of Cleanrot Knights, and the Shaded Castle is home to several as well.

The Knight’s attacks are powerful and inflict Rot, but braving these fights is well worth the risk. The dungeon boss versions drop thousands of Runes and useful items, while defeating those you encounter elsewhere can give you the Cleanrot armor set, along with some strong weapons useful for any build. 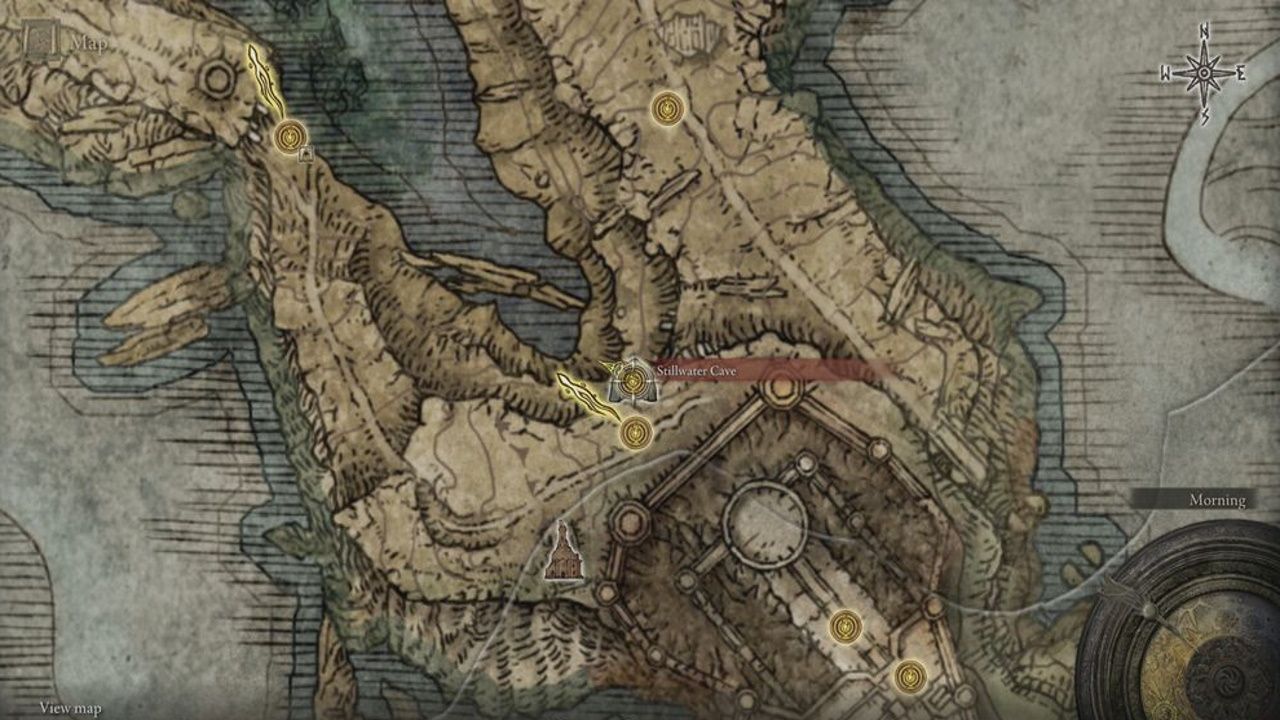 The Cleanrot Knight comes in two varieties, one who wields a sword and one with a scythe. The sword-using Cleanrot Knight is who you’ll find in Liurnia’s Stillwater Cave, though there’s one of each in Caelid’s Abandoned Cave.

Both versions have similar attack patterns that work effectively at close- and mid-range, attacks that can inflict Scarlet Rot if they connect. You can – and should – use Spirit Ashes during the boss fights, though you’re unable to summon Spirits during most of the regular field encounters.

Cleanrot Knights are vulnerable to Frostbite and Bloodloss, so consider using weapons that inflict either of those effects. 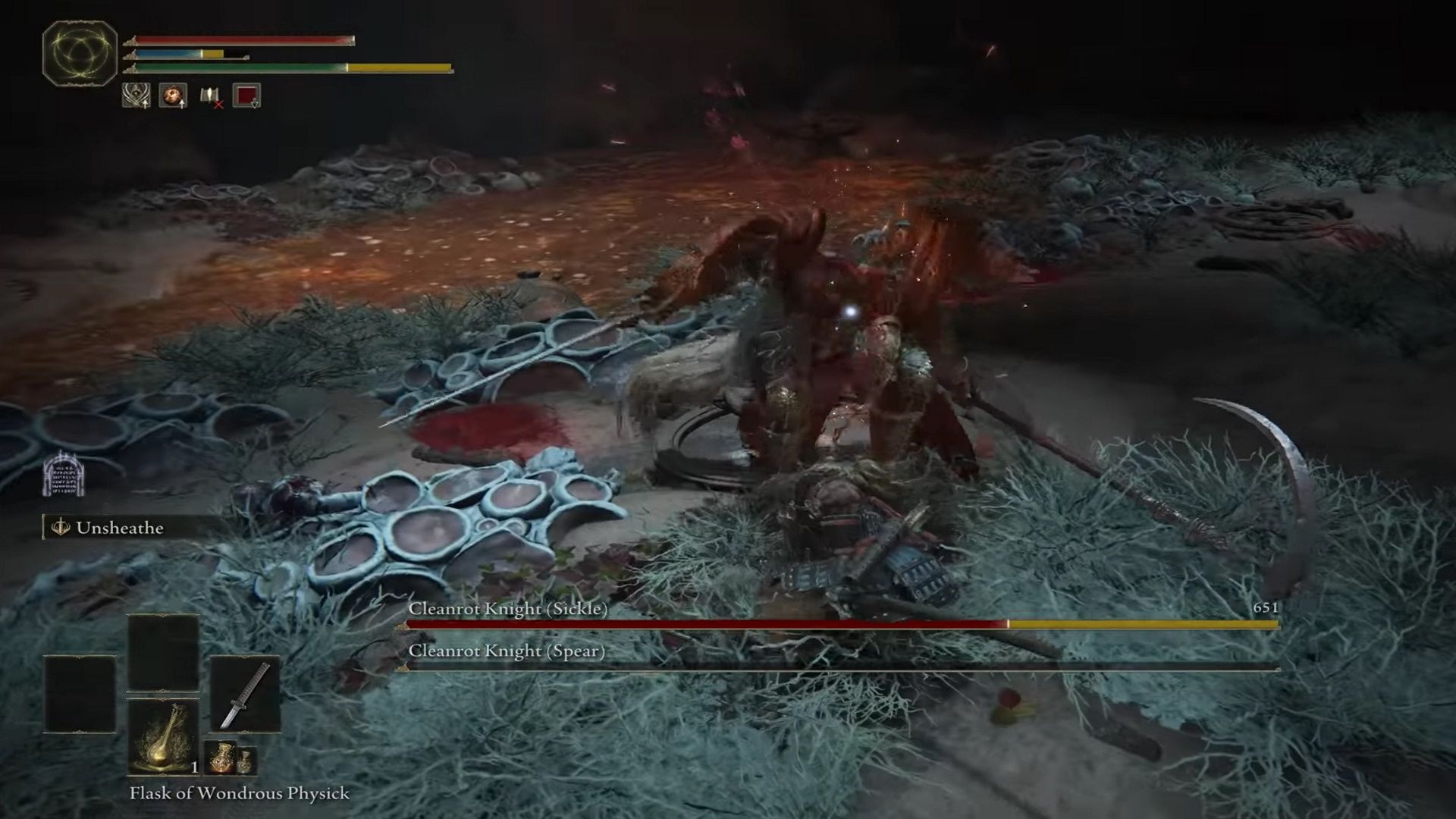 The Knight’s attacks are powerful and can easily stagger you, though it also telegraphs them more clearly than most enemies. That said, it may still take a few tries to learn its patterns and figure out when to dodge.

Most of its moves also leave the Knight open to attack for a few moments afterwards, so prepare to strike after a successful dodge.

The scythe-wielding Cleanrot Knight primarily relies on Miquella’s Ring of Light, a magic attack that hurls a disc of light at you. It uses several times in a row, so you’ll need to dodge forward to make an opening.

This is the Knight’s most common move, used when you’re at close range. The Knight will slash and thrust multiple times with its sword, or it may use two strong spear thrusts.

The Knight guards by crossing both weapons in front, briefly glows golden, and moves forward, shoving you backward in the process. This move leaves you vulnerable for a few seconds. Run away when its weapons flash gold, and avoid lingering too long at close range.

The Knight’s spear glows golden, and the Knight rushes toward you. If the attack connects, the spear impales you and hoists you off the ground. It also inflicts Scarlet Rot. If you dodge it, the Knight remains open to attack for a few seconds afterward.

The Knight thrusts its spear upward, and a small column of golden spears come out of the ground in front of it. The attack has far-reaching range, but you can dodge to the side to avoid it. The Knight is also vulnerable to attack after this move.

Melee classes have an easier time dealing with Cleanrot Knights, not least because the knights are weak to backstabs and jump attacks. Magic users may want to swap spells for magic-scaling weapons, such as the Moonveil Katana, Cipher Pata, or Angel Scythe.

Melee characters can keep their distance to avoid the Cleanrot Knight’s basic attacks and then close in for either a jump attack or, if the timing is right, a backstab.

Using a Spirit summon makes the fight more manageable by providing a distraction that the Knight focuses on. This is especially useful if you want to try for backstabs.

Bloodhound’s Finesse or Bloodhound’s Step are helpful Spirit Ashes, since they let you attack and quickly retreat or relocate without remaining in danger.

Magic users relying on spells will need to use Spirit Ashes during the boss fights to create a distraction that lets them fire off Incantations and Sorceries. Rock Sling is a powerful choice for Intelligence characters, one that hits multiple times and has the added benefit of long range.

Again, using a weapon that scales with your magic stat is highly recommended, given the Cleanrot Knight’s speed and strength.