From dex weapons to colossal swords, Elden Ring's The Lands Between are teeming with weapons waiting for you to pick them up. But some stick out more than others due to the sheer oddity of their appearance and use.

Whether it's a giant finger or a regular household appliance turned deadly, some of these weird and wacky weapons are no less effective against enemies. 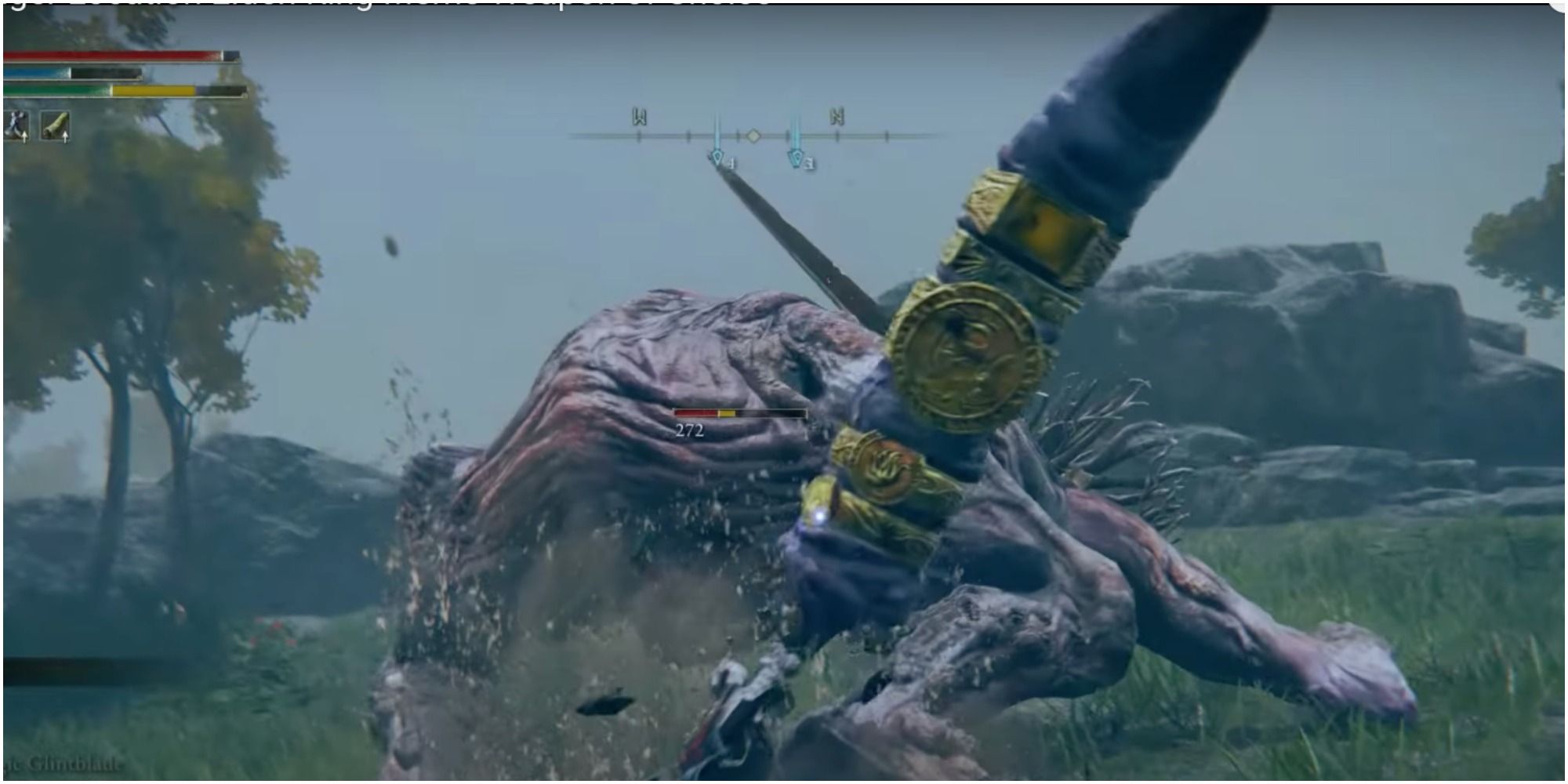 It is exactly as it sounds: fighting enemies with a hammer in the shape of a massive, ringed finger. And this meme-worthy weapon is quite deadly as well, paired with the skill Claw Flick, which causes the finger to enlarge and flick enemies away like a gnat.

In order to get this spectacular weapon, you must go to Gelmir Hero's Grave in Mount Gelmir. Just like the Fringefolk Hero's Grave, you have to traverse a magma-filled cave and a rolling chariot of death. Use an alcove to avoid the latter and keep going down the main path till you reach the end, where you'll find the Ringed Finger inside a chest. 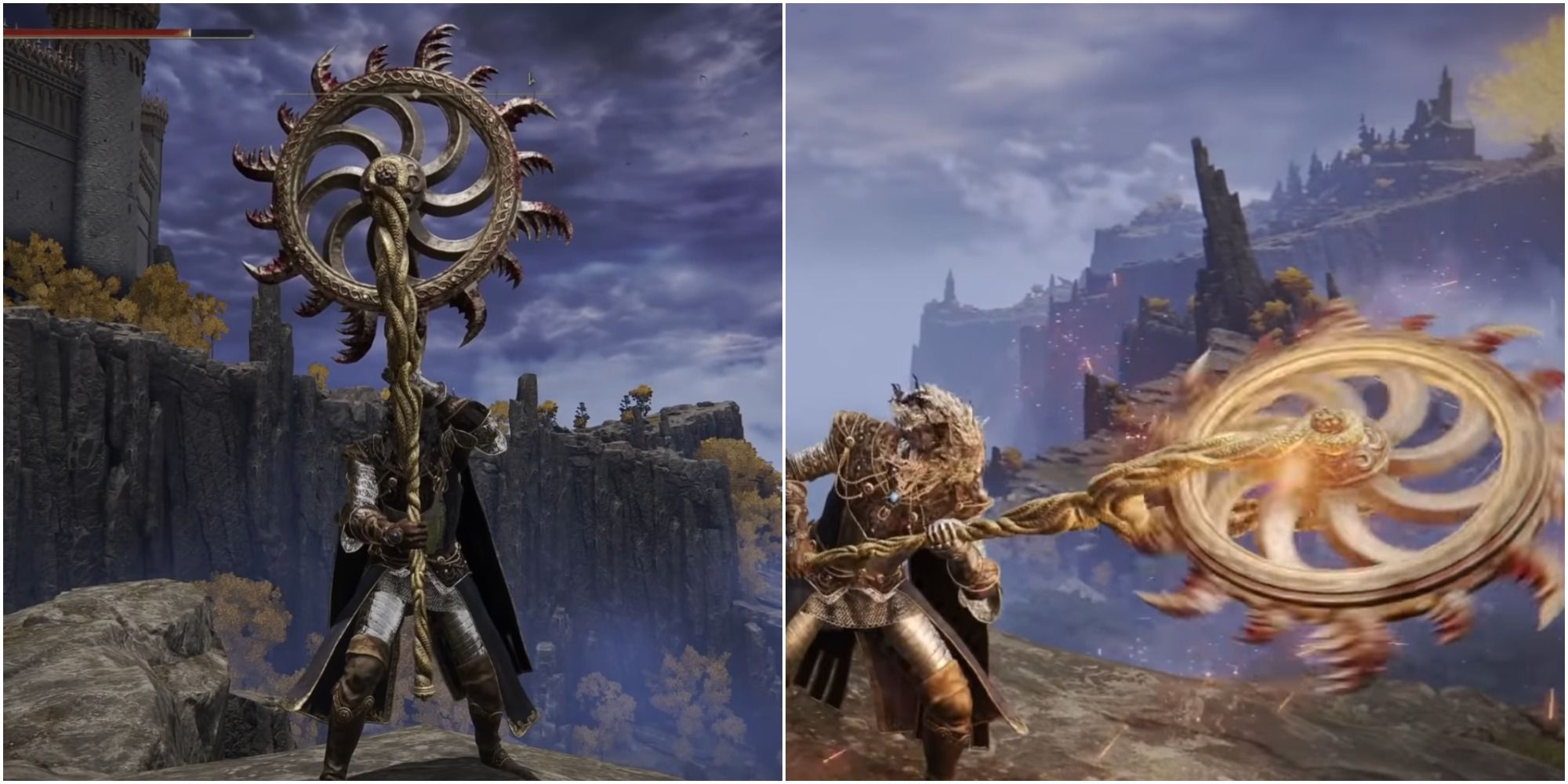 Shaped like a pizza cutter, Ghiza's Wheel is as unique and weird as they come. This colossal weapon moves like a chainsaw, its bladed wheel able to stay in motion even while you move, making it an effective weapon against hefty enemies.

If you would like to obtain Ghiza's Wheel, head first to Volcano Manor. You would have to enter the dining hall of the manor, where you'll be invaded by Inquisitor Ghiza. Once defeated, they will drop Ghiza's Wheel as a reward. 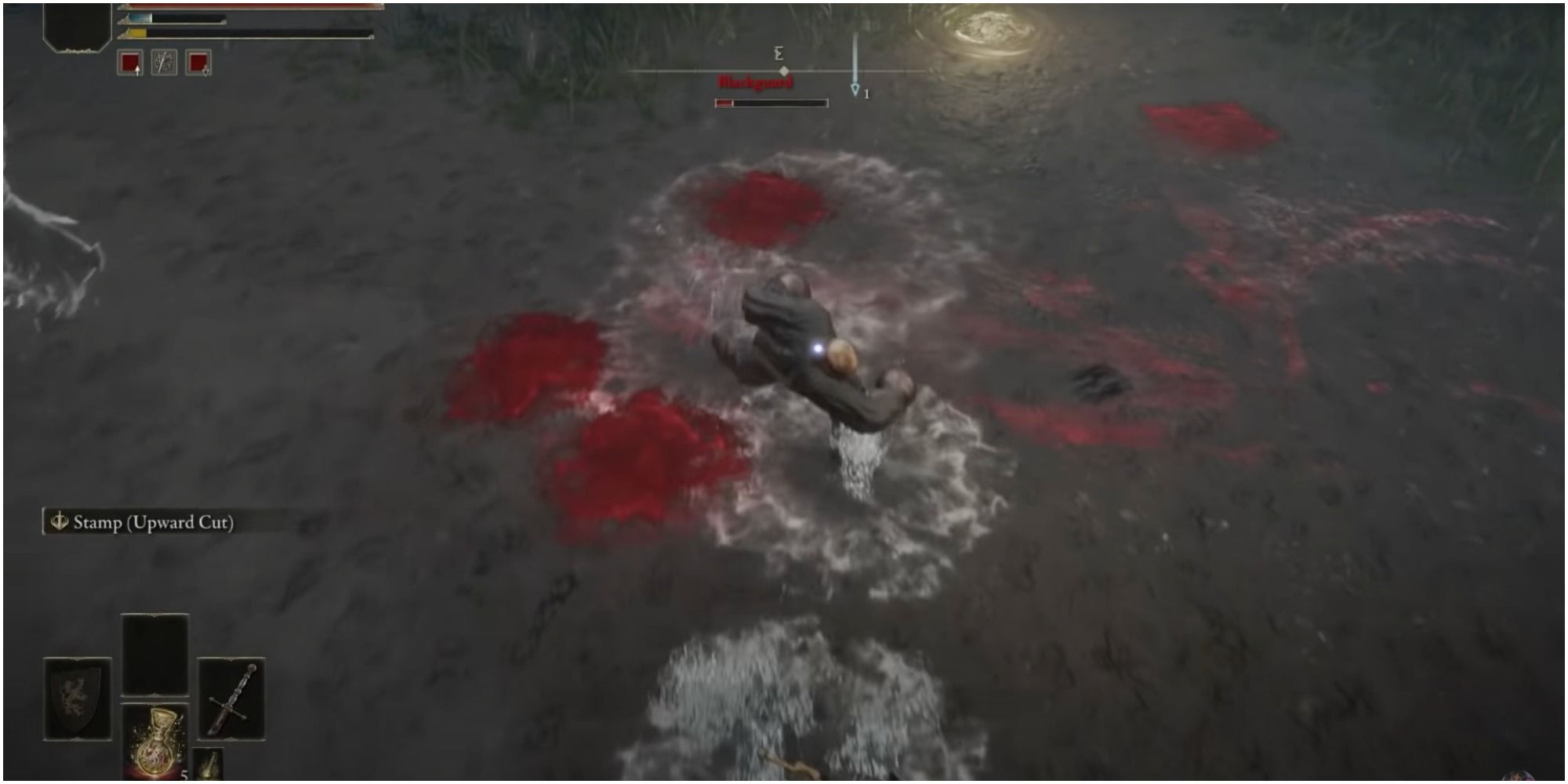 A Fist-type weapon, you literally cover your fists with these hefty iron balls. With the skill of Braggart's Roar, Iron Balls help you boost your stamina, defense, and attack recovery. But if you want to get your hands on this, you'd have to defeat Blackguard Big Braggart.

Found in Boilprawn Shack as part of the quest to get to Volcano Manor, you'll find him… boiling prawns. You'll then have to retrieve Rya's Necklace from this NPC who stole it. If you choose to attack, then he'll drop the Iron Balls along with the quest item. 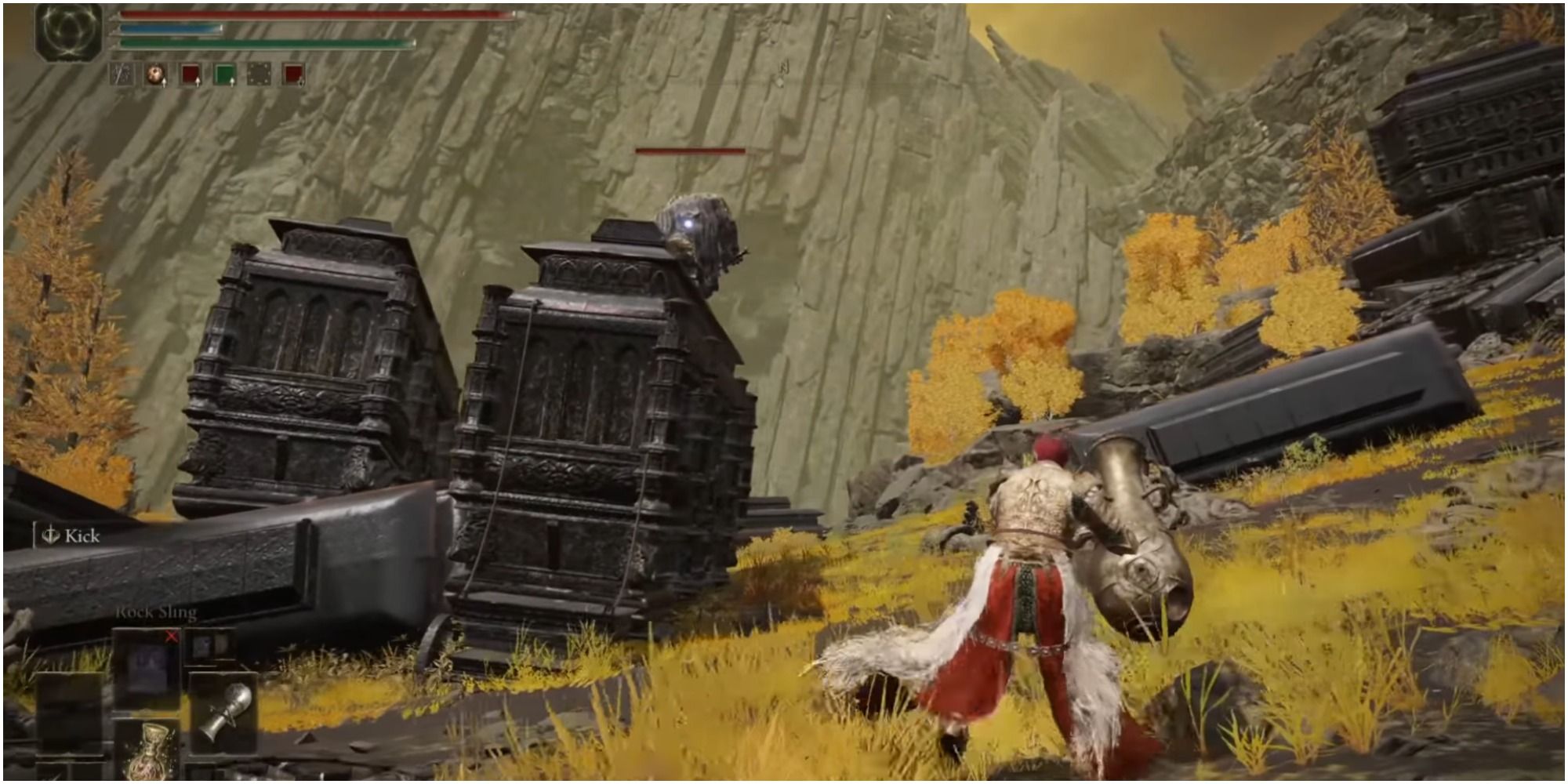 This handheld cannon in the form of a brass jar is certainly innovative and creative in a way. Gone are the days of bows and crossbows when you got a portable cannon that shoots greatbolts. It's certainly handy when you want to deal more damage from afar. 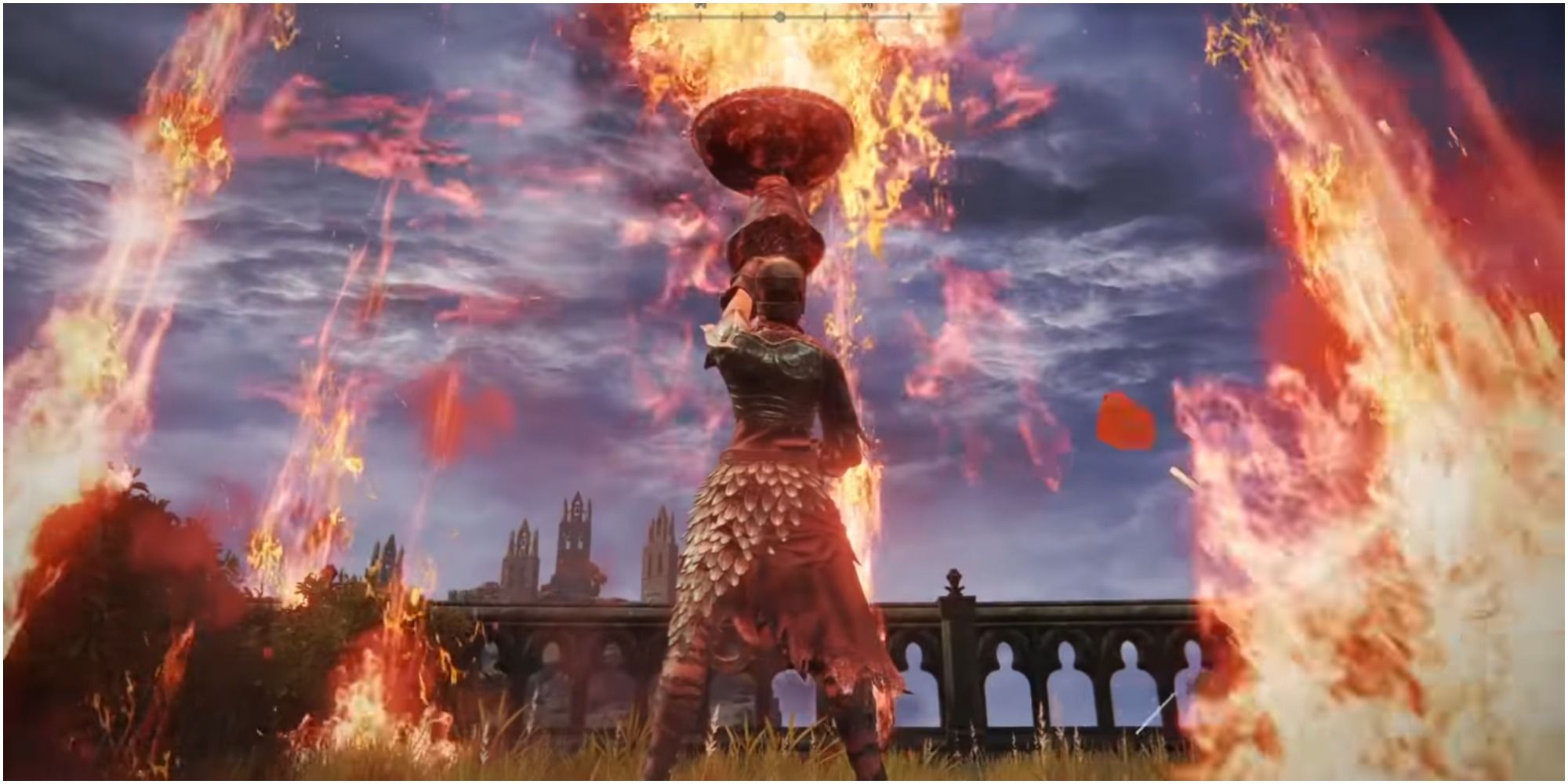 Truly a weird one, a warhammer in the shape of a domestic household product probably takes the cake for one of the weirdest weapons in the game. The Cranial Vessel Candlestand hits hard and swings hard, with the Surge of Faith skill causing a fiery torrent to shoot out and bathe enemies aflame.

To get this unique weapon, head to Giant-Conquering Hero's Grave. You'll need a Stonesword Key to access the fog wall, as the candlestand weapon is behind it. 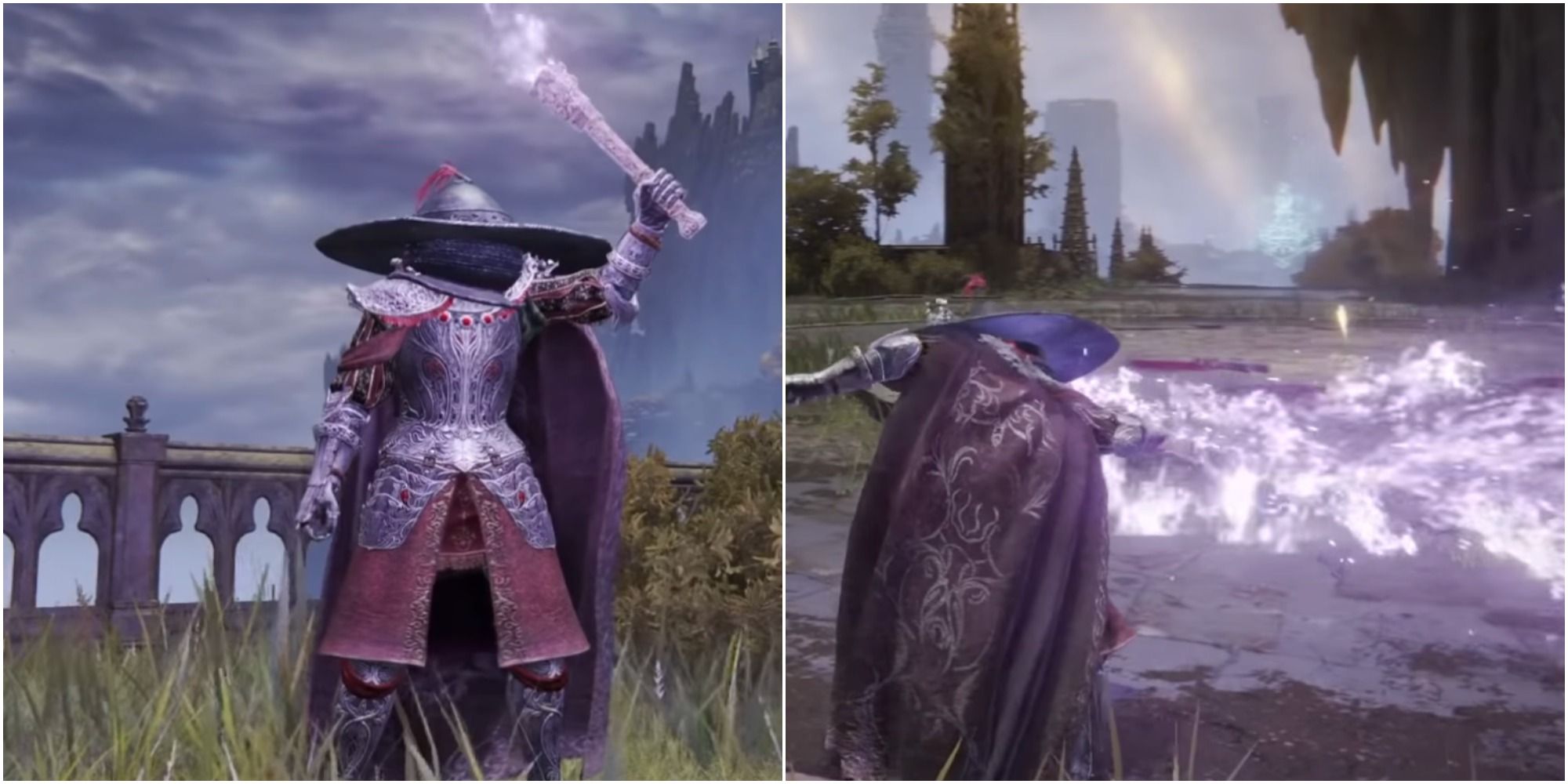 This special torch can, of course, set enemies aflame by whacking them with it. But St.Trina's Torch holds a special purple flame that, when blown at foes, will cause them to fall asleep immediately. Leaving your enemies defenseless as they snore away, definitely makes things easier to handle.

St Trina's Torch can be found at the Consecrated Snowfield in the Mountaintops of the Giants, in the chest inside a moving carriage. Of course, this convoy is well protected, with snow giants pulling it and a team of armored knights behind it. It's a FromSoft game, so don't expect it to be easy. 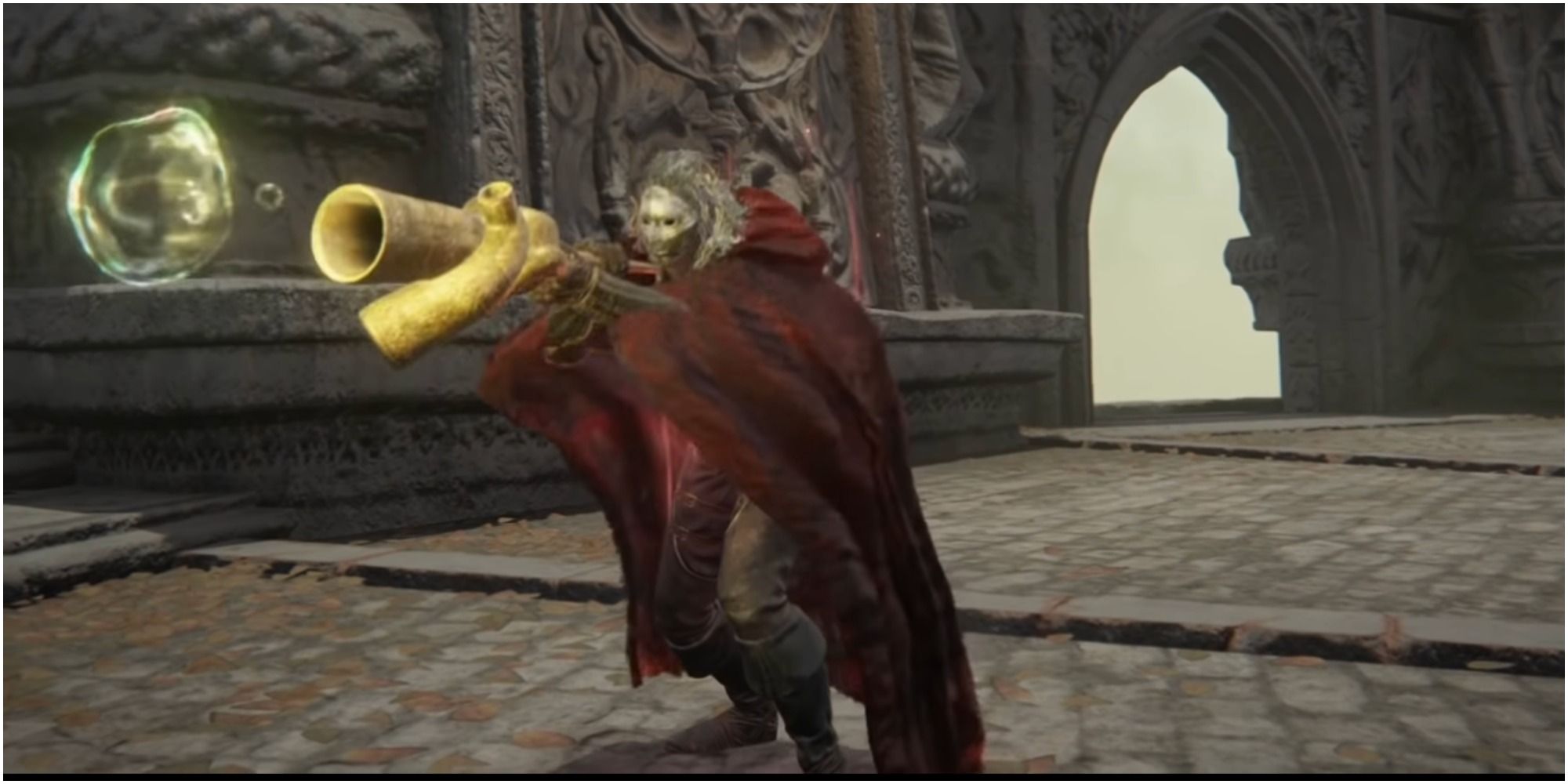 Well, this is one weird weapon you'd expect to find in The Little Mermaid. Moreover, the Envoy's Horn is classed as a hammer that shoots what looks like a glass bubble. The latter doesn't do a lot of damage at all, but this weapon definitely looks like another meme-worthy party horn.

But if you're itching to lay your hands on this and blow some adorable rainbow bubbles just for fun and giggles, the Envoy's Horn is dropped by Oracle Envoys and there are many of those in Eastern Capital Rampart section of Leyndell, Royal Capital. 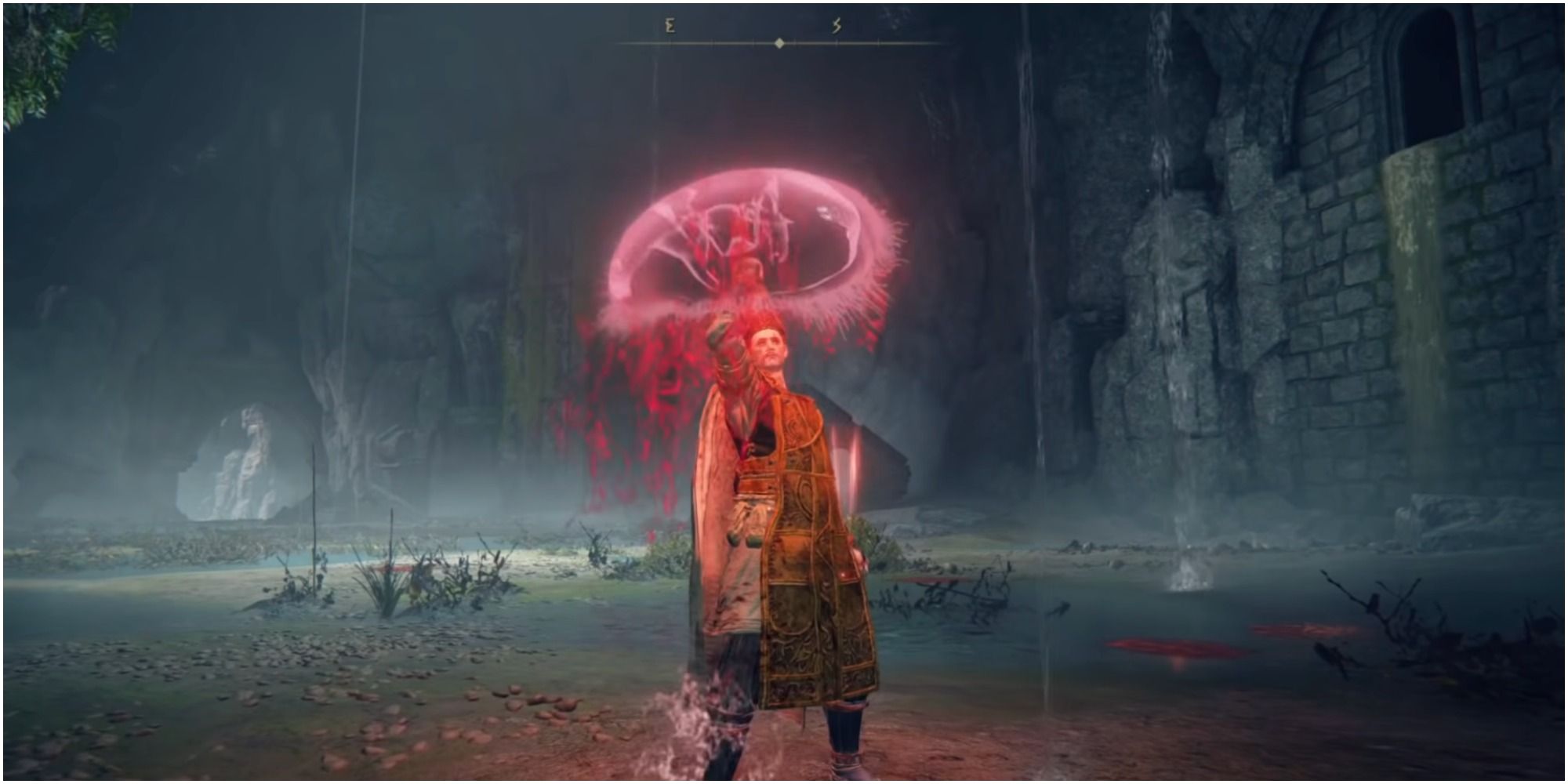 One of the best shields in Elden Ring, this odd -yet creative- shield is made from the head of the deadly spirit jellyfishes you find wandering about in some areas of the map. With the skill Contagious Fury, you can increase the damage you inflict.

Of course, using a shield runs the risk of adding to your weight load and decreasing your agility and speed. But the defense you gain is well worth it. To get this shield, you must fast travel to the Foot of the Four Belfries site of grace. From there, head north, where you'll find it on a dead corpse guarded by spirit jellyfishes. 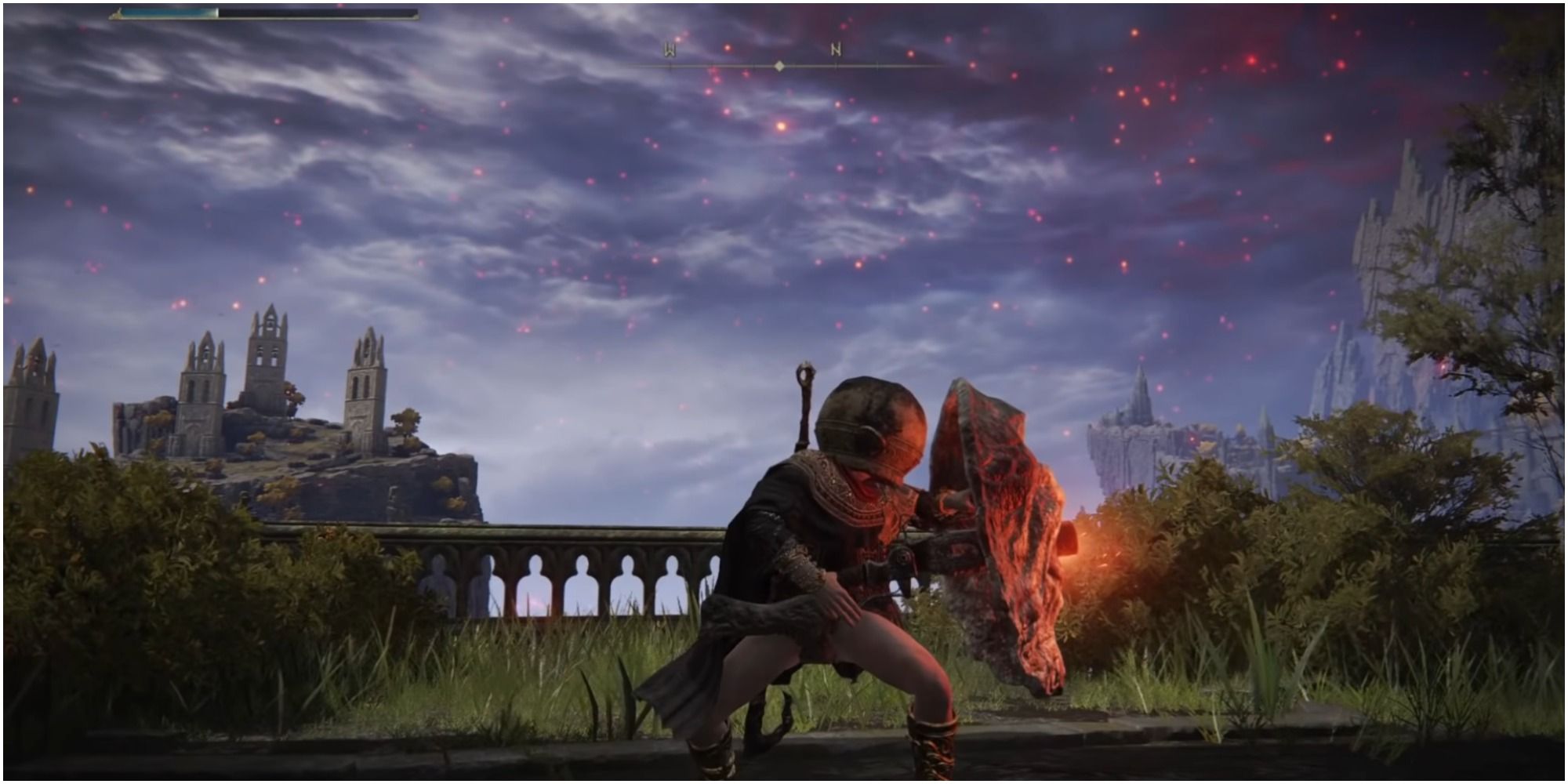 An odd-looking shield in the shape of a one-eyed giant's head, it's quickly obvious that this isn't a normal shield. Aside from blocking, this shield actually has a shotgun inside it known as the Flame Spit, which spews out large fireballs.

Located in the Mountaintops of the Giants, you'll need to go to the Guardians' Garrison near Whiteridge Road site of grace. Moving past the main entrance, turn left and climb up the ladder. Continue up the stairs and smash some crates that are blocking a hidden path, before going up the latter and facing an invader, who'll drop this shield. 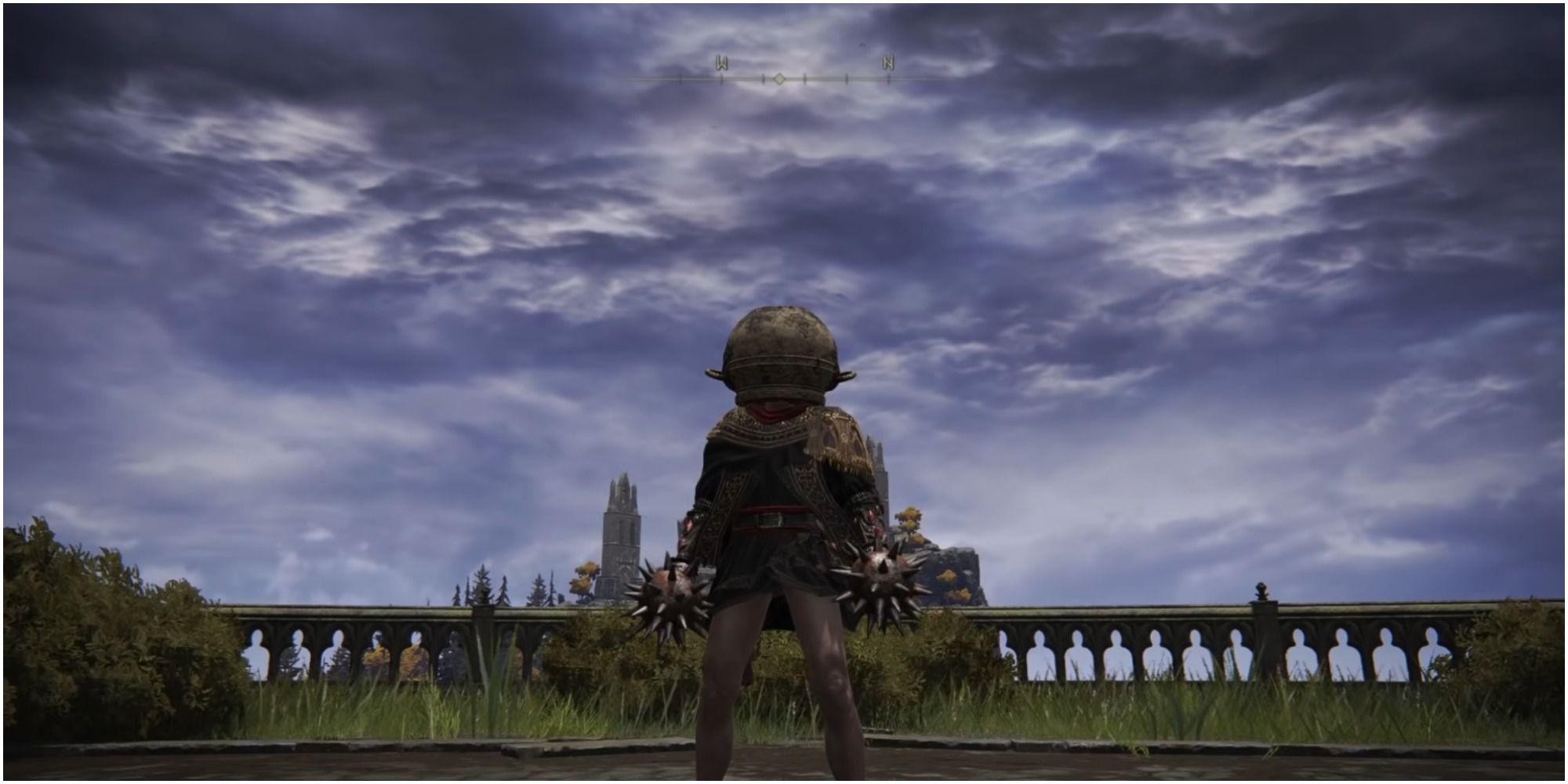 Basically an upgraded version of the Iron Balls but with spikes, the Star Fists has the ability to cause blood loss buildup. Its skill is known as Endure, which allows you to cross your arms in front of you and block incoming attacks. But it's great for walloping your enemies to death.

Found in Leyndell, Royal Capital, start from the Western Capital Rampart site of grace. Then, move down the bridge and turn left up a rocky path, where you'll find a building holding the corpse that drops this weapon.