Catacomb dungeons in Elden Ring harbor many traps and tricks to challenge you on your quest to becoming Elden Lord. While dungeons are never necessary for completing the game, they let you earn some quick runes and find some useful tools like Talismans and Somber Smithing Stones

Wyndham Catacomb is located within the Atlus Plateau but can be difficult to spot. From the Erdtree Gazing-Hill Site of Grace, there is a statue in front of the Tibia Mariner Wyndham Ruins that when interacting with, shows the general location of a nearby dungeon. The catacombs are higher up the hill behind the Wyndham Ruins. 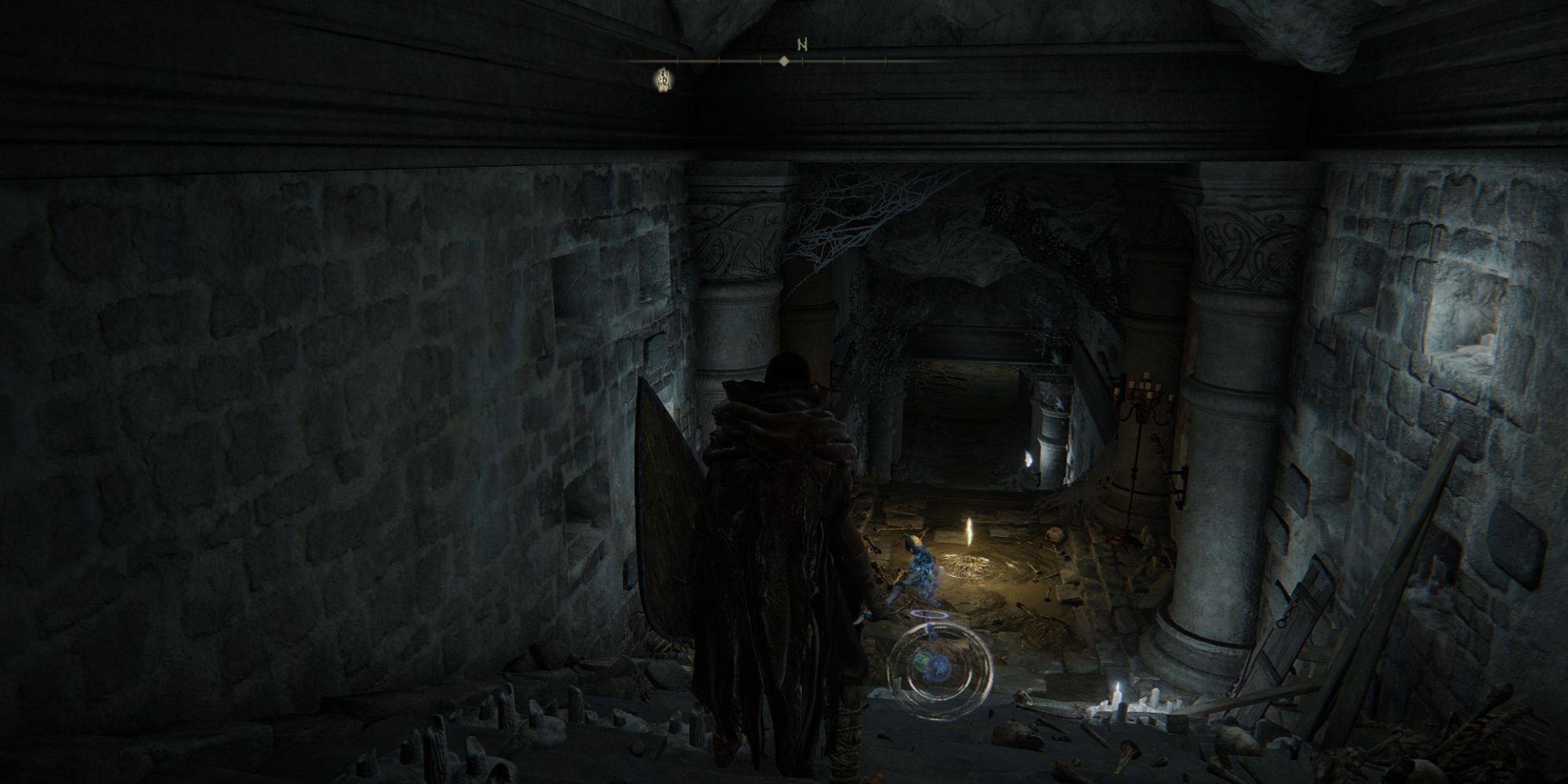 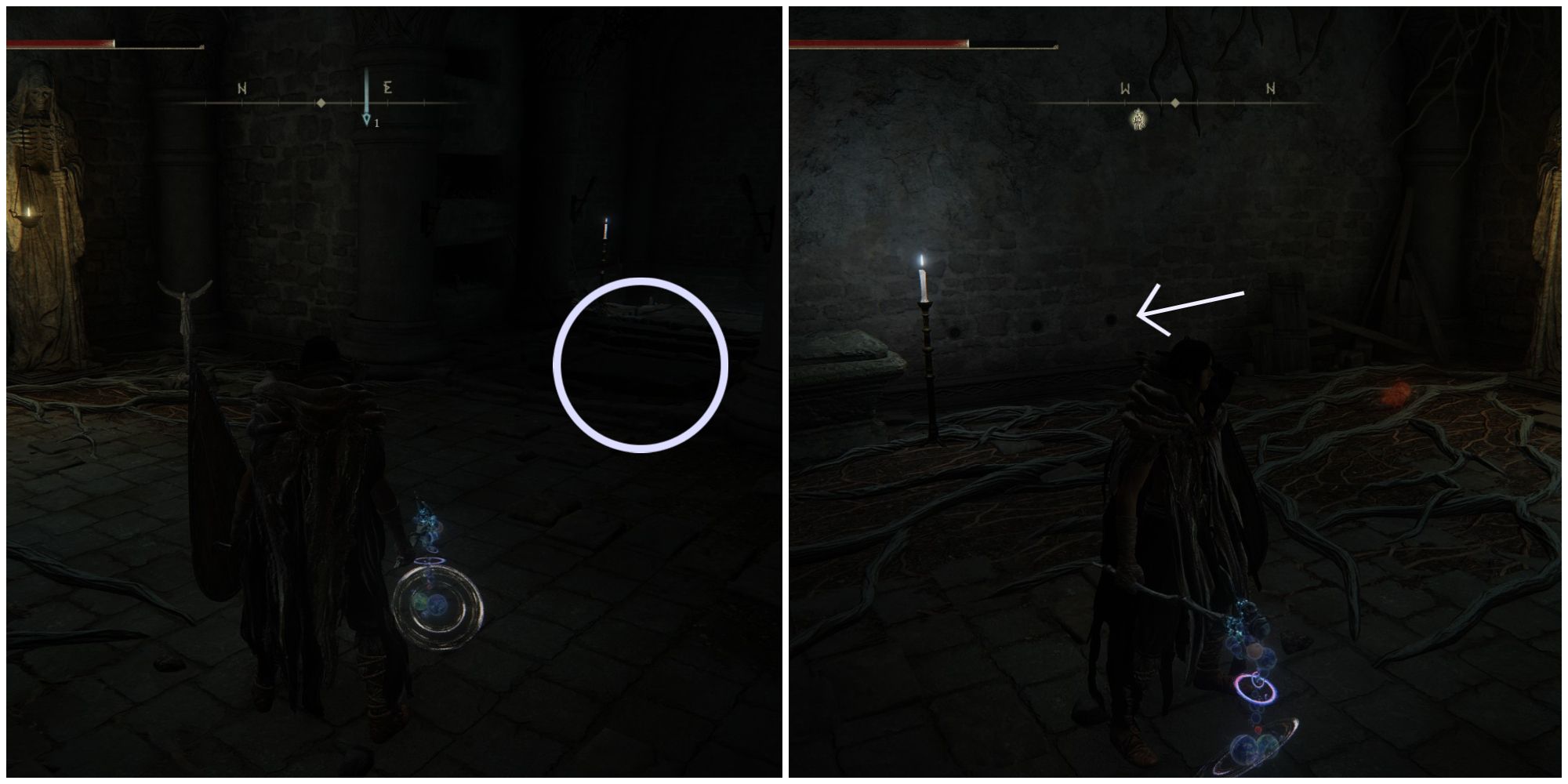 In catacombs, the boss room is typically directly very close to the Site of Grace. It remains locked until you traverse through the dungeon and find the lever that unlocks it. That's also the case in Windham Ruins. To the right of the boss door is a trap in front of a lift. A pressure plate will unleash lightning strikes from the holes in the adjacent wall. So, avoid stepping on this pressure plate and use the lift. 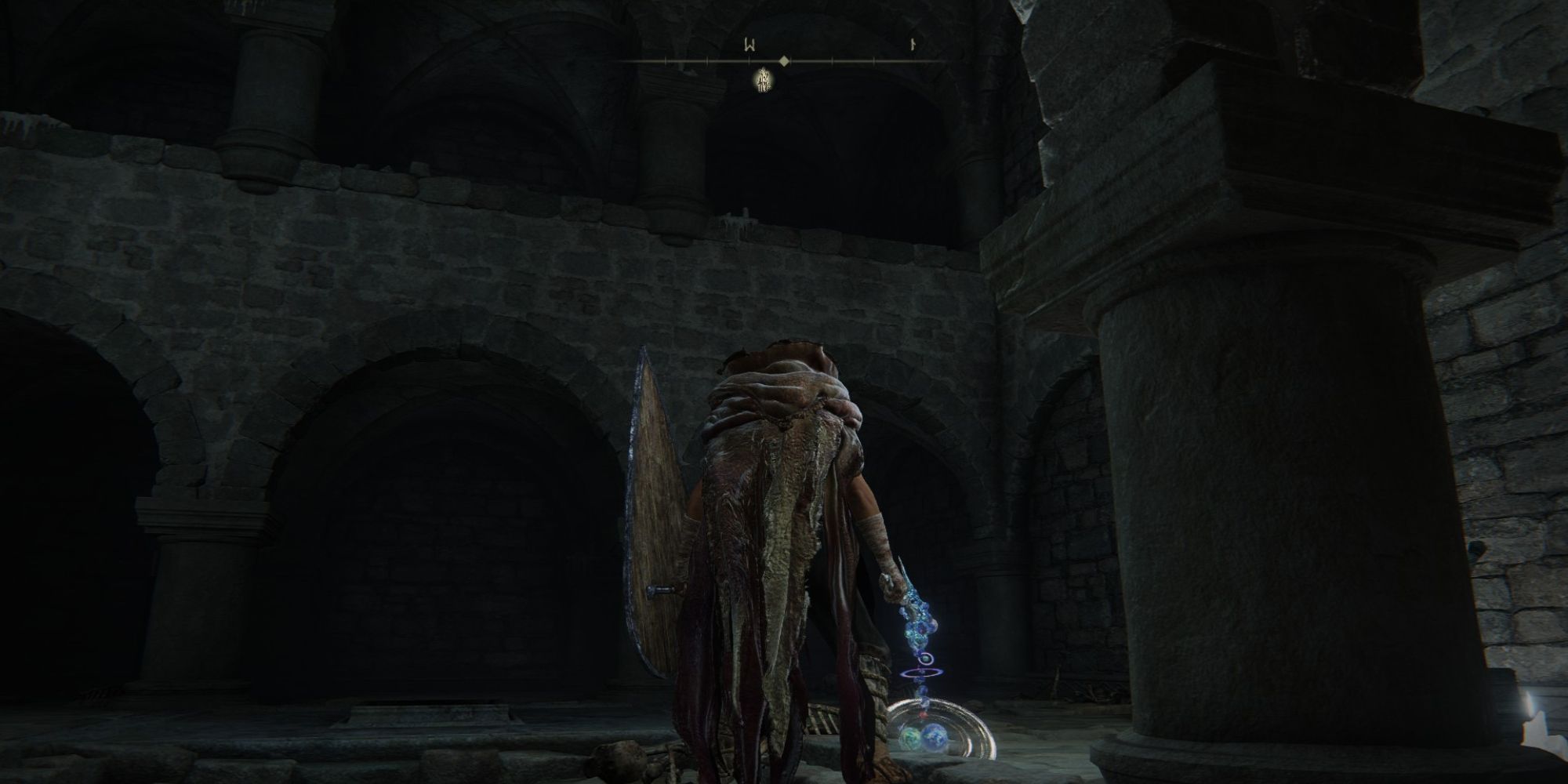 You can drop off the lift before it reaches the lower level. There is a ledge with a Grave Glovewort on it. Gloveworts can be used to upgrade Spirit Ashes, making them very useful. 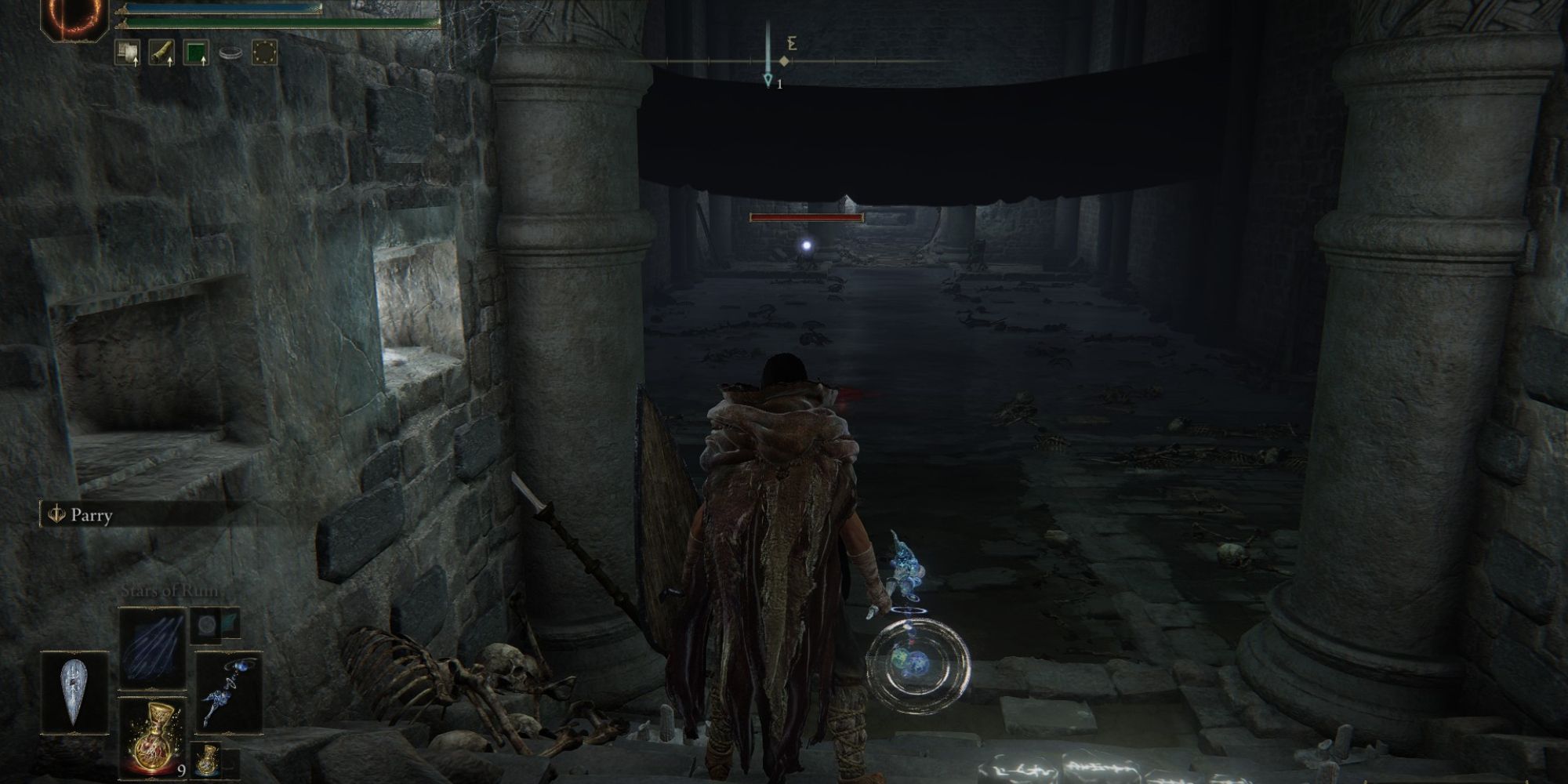 Continuing past the lift, there is a guillotine trap with two imps standing on the other side. If you have a shield, it's best to put it up now. The imps will stand still and throw damage at you. You can either range attack them or just rush them. 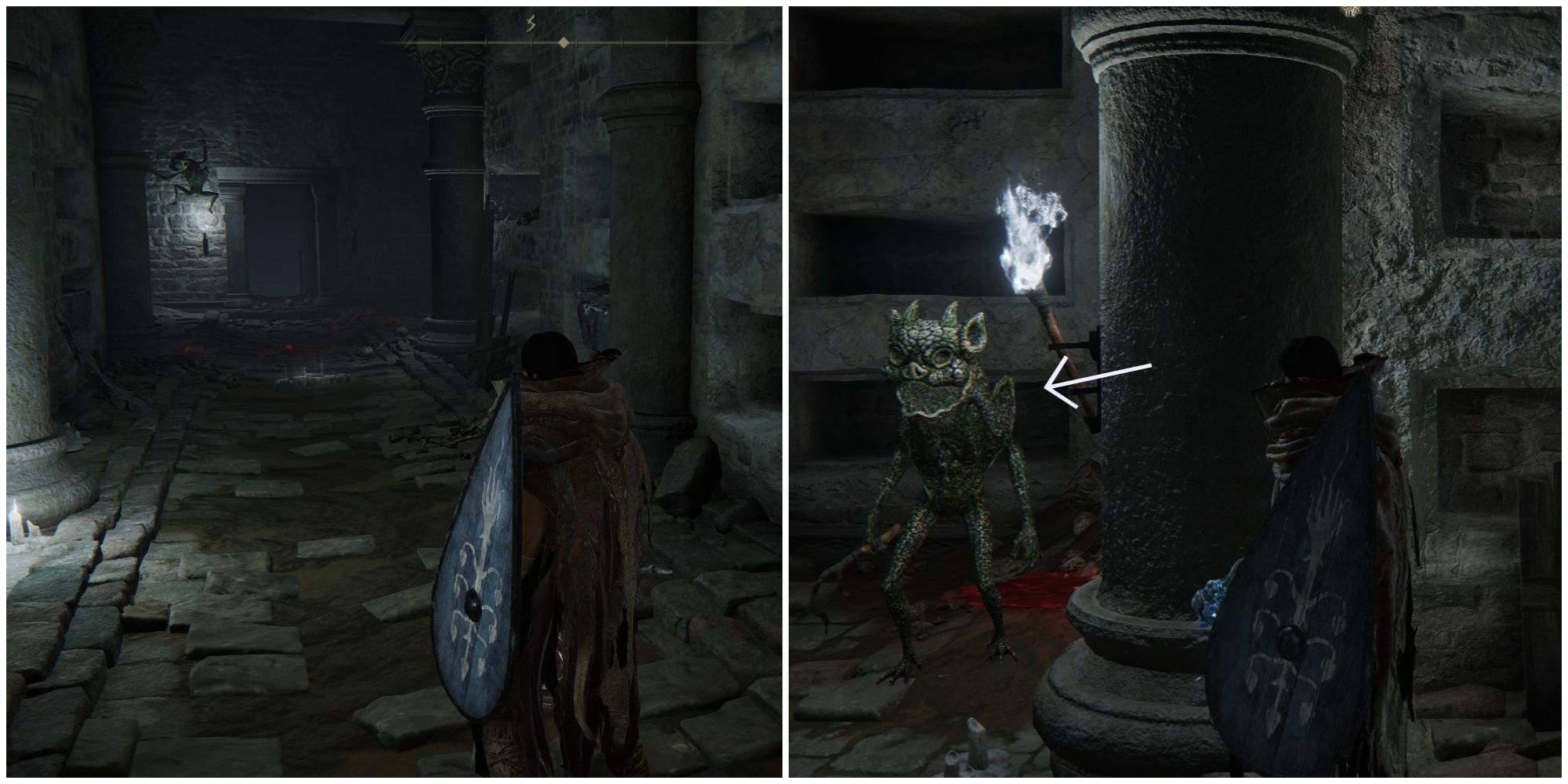 Past the guillotine, you'll notice an imp sitting on the wall ahead, waiting to ambush you. He's not the only imp in the room. There's an imp hiding behind the wall to your right who will quickly leap onto you if you're not careful. 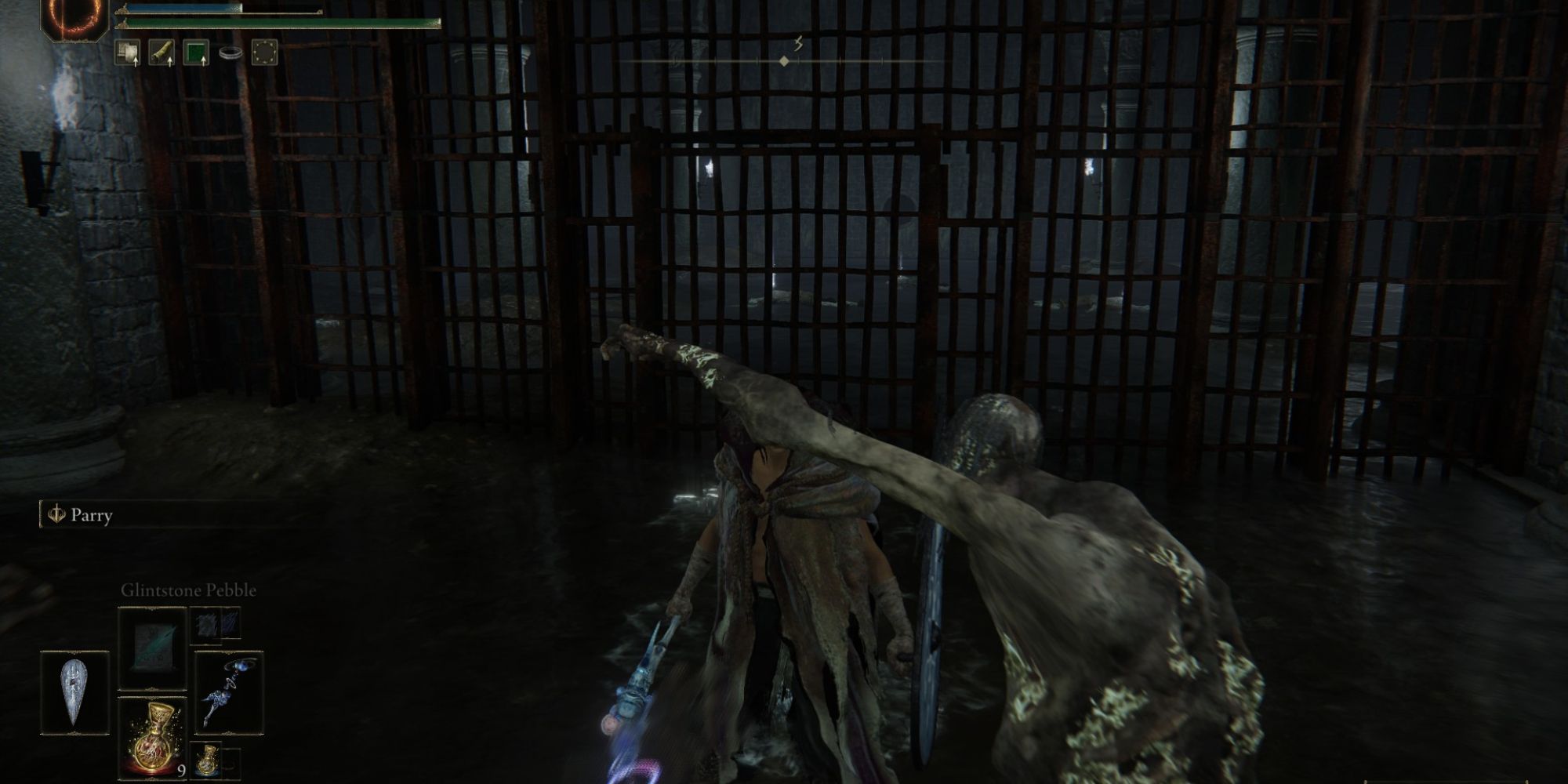 Now you'll head down some steps and enter a sewer area. There will be various poisonous undead here that will try to grab-attack you. Straight ahead, there are special items behind the gates. You can access this later in the dungeon, but not from here. 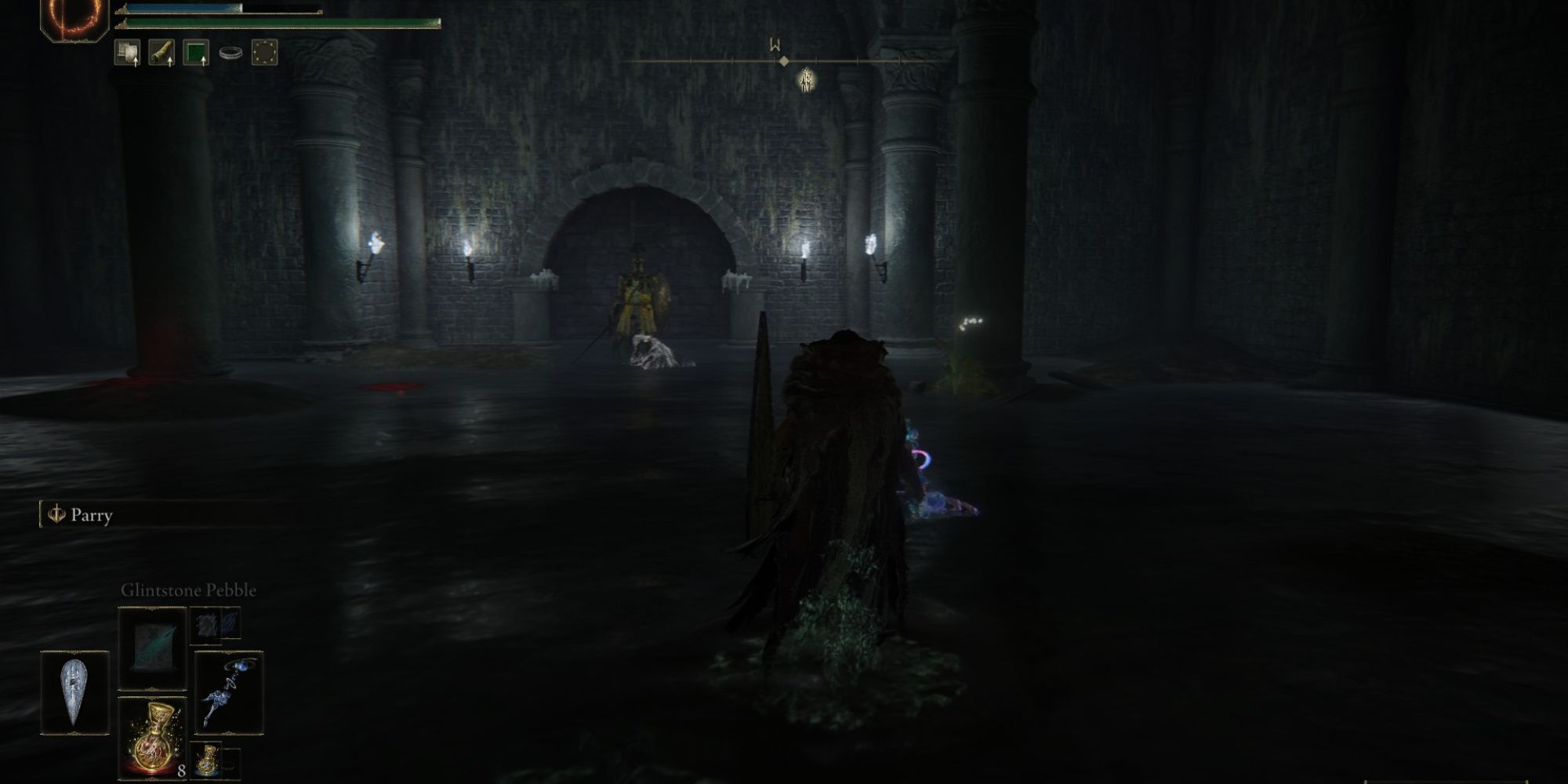 The undead skeletons are not hard to take down and you should do so quickly because there is a noble knight to the right standing in the way of a ladder. If you don't take this knight out, you'll face trouble. He will follow you right up the ladder and into another lightning trap pressure plate and more enemies if you let him. Up the ladder is a pressure plate to avoid and an imp statue fog gate. Behind this fog gate is a Lightning Scorpion Charm Talisman. 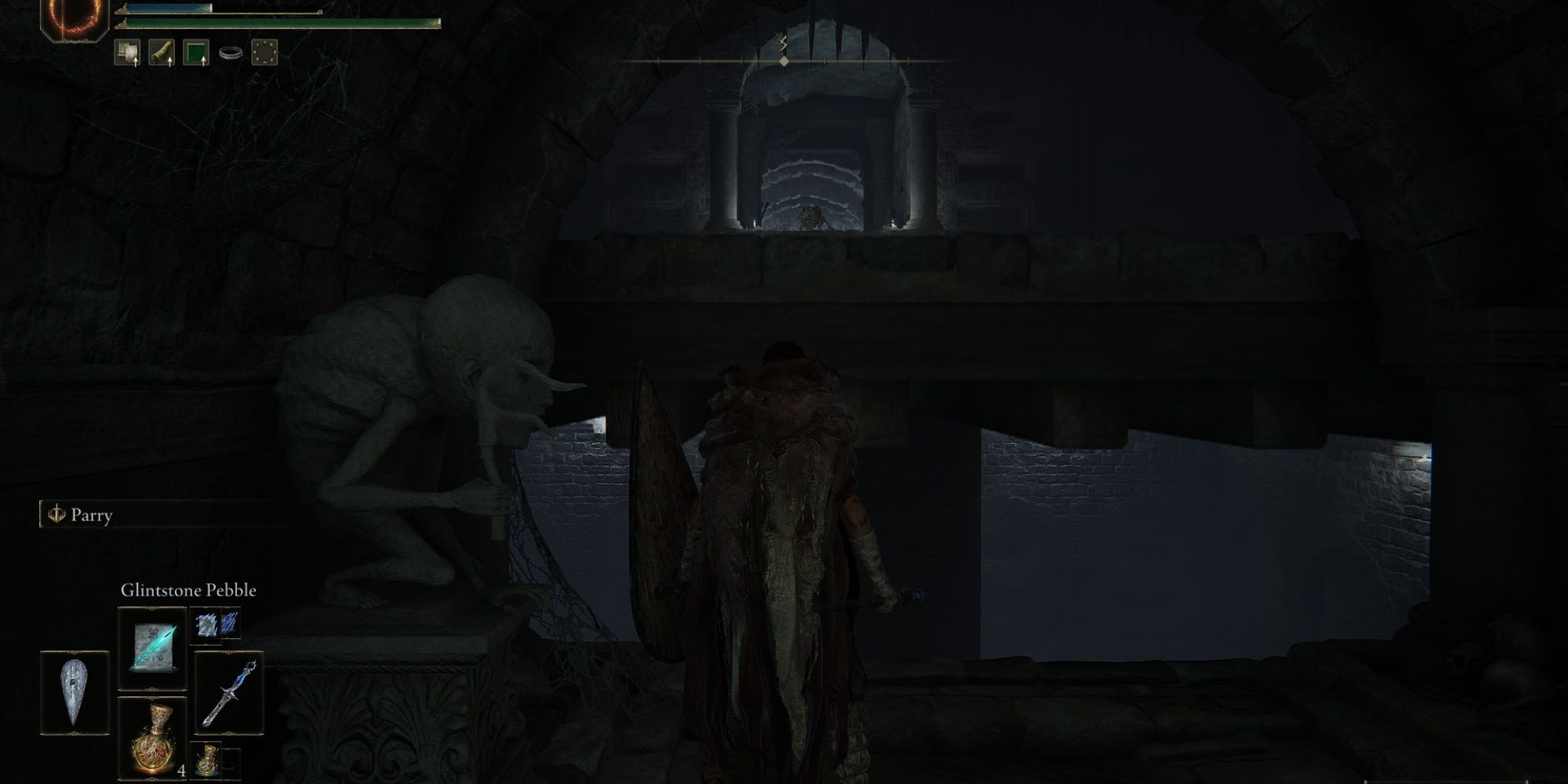 To the left is a giant lift mechanism of danger. If you stand on it without getting off you'll get impaled by the spikes on the ceiling. The way to go is clearly across, but trigger the lift and then get back off. You can jump down below it to access the previously inaccessible loot from the sewers. 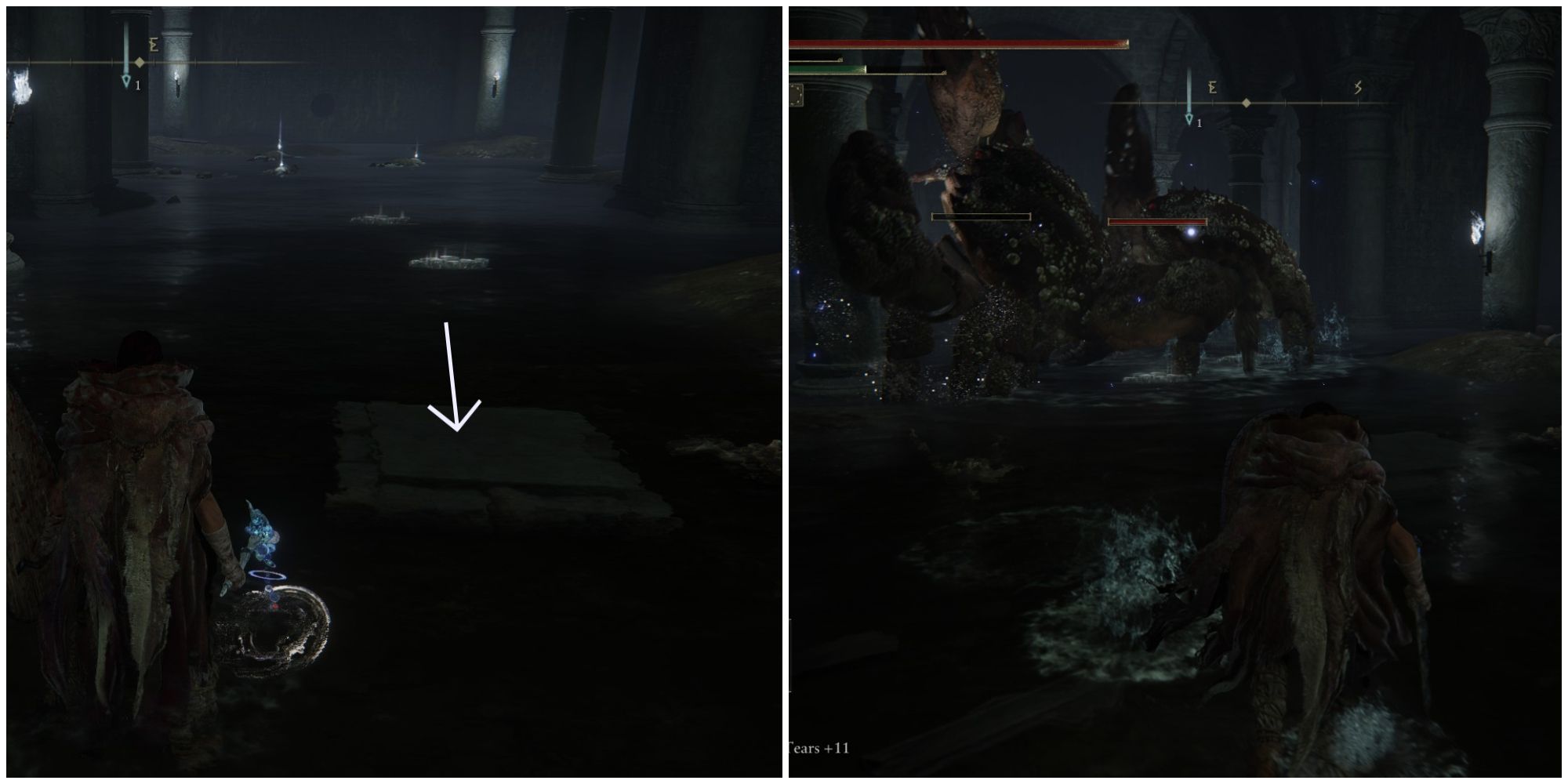 Be careful here. There's a visible pressure plate in the water that will unleash more lightning bolts upon you. Not only that, but as soon as you reach the loot, two giant crabs will spawn. Prepare for a fight with them and collect the loot after they are defeated. To exit this area, find the lever to the right of the gates that lead back to the original sewer area and ladder with the knight. Make your way back to the lift mechanism from the ladder. 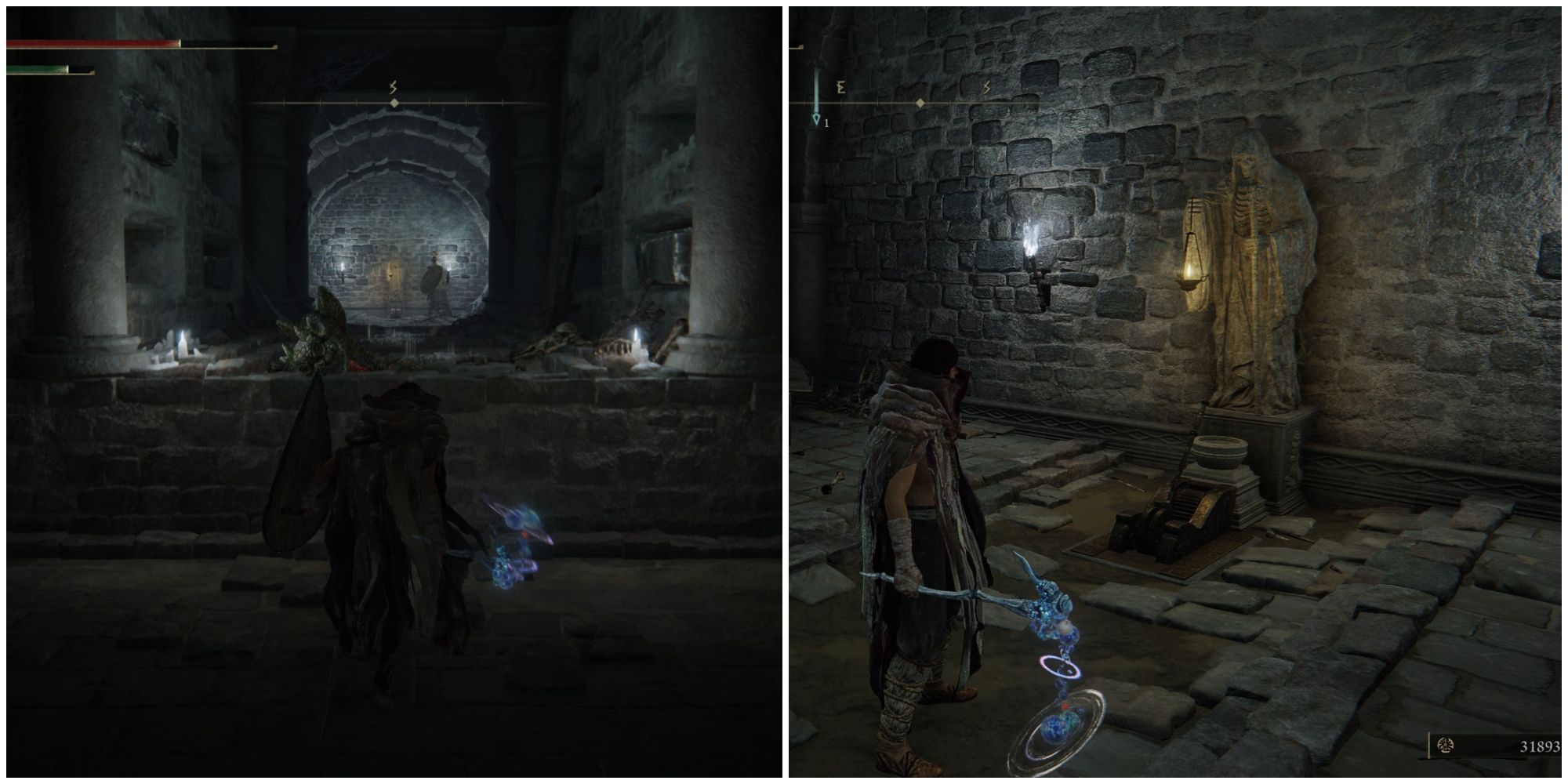 Across the lift are an imp and a knight. You can rush the imp and then take it slow, as the knight won't see you until you get closer. There is a second imp hiding to your right when you move in on the knight. Look in the spot where the knight was standing to find the lever that opens the boss door. When turning back to the lift mechanism and going back, take note that there will be yet another imp across the way in a dark corner.

The boss of Wyndham Catacombs is a repeat of previous catacomb bosses before. You likely met a similar foe in Limgrave shortly after starting the game. Its moveset consists of rising slowly and stomping down. The attacks are easy to predict and dodge, making the Watchdog one of the easier dungeon bosses in Elden Ring. 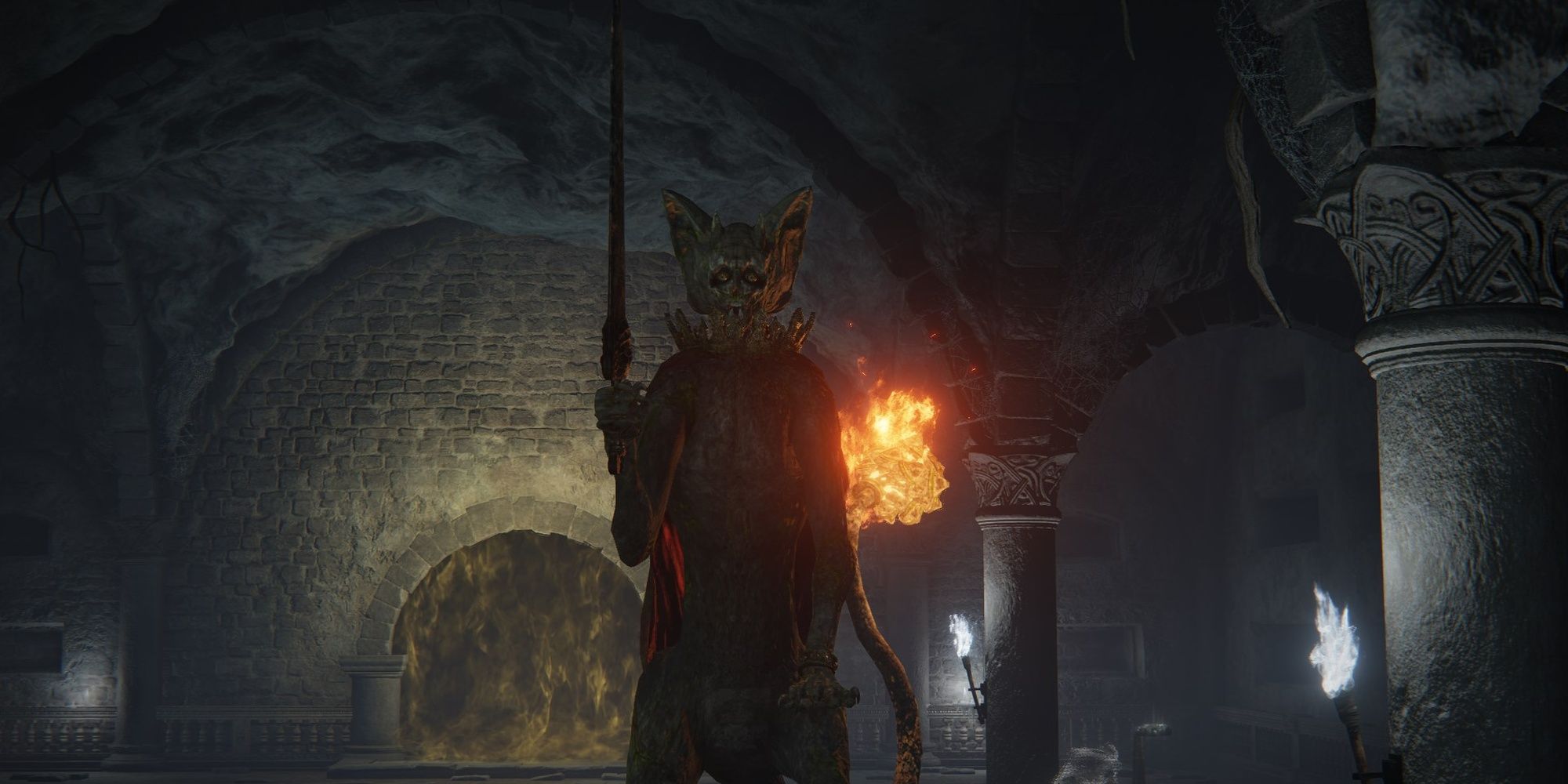 Instead of fire damage, this Erdtree Burial Watchdog has a lightning tail and shoots lightning from his mouth. If you're using magic it's best to stick to fast-casting spells, because while the start of its attacks is slow it still won't be enough since the watchdog loves to constantly jump to get closer to you.

When the watchdog rises into the air, wait for him to drop down to you before you start doing damage. If it's staying in one place and attacking with the sword, this is when mages can step back a bit and cast some spells.