Fleet Carriers are absolutely massive ships. Ships big enough to fit your entire fleet inside, and then some. They act as a portable base of operations, hosting a ship repair yard, a marketplace, and various other useful benefits for your journey into the universe of Elite Dangerous.

In accordance with their size, Fleet Carriers are wildly expensive, especially for new players that might have recently jumped into the game. This means Fleet Carriers are a late-game addition to your arsenal. They offer the player convenience, potential profit, and a portable base, and the badass feeling of seeing this ship in orbit and thinking “Yeah, that’s mine. All mine.”

Uh, What Are Fleet Carriers Exactly? 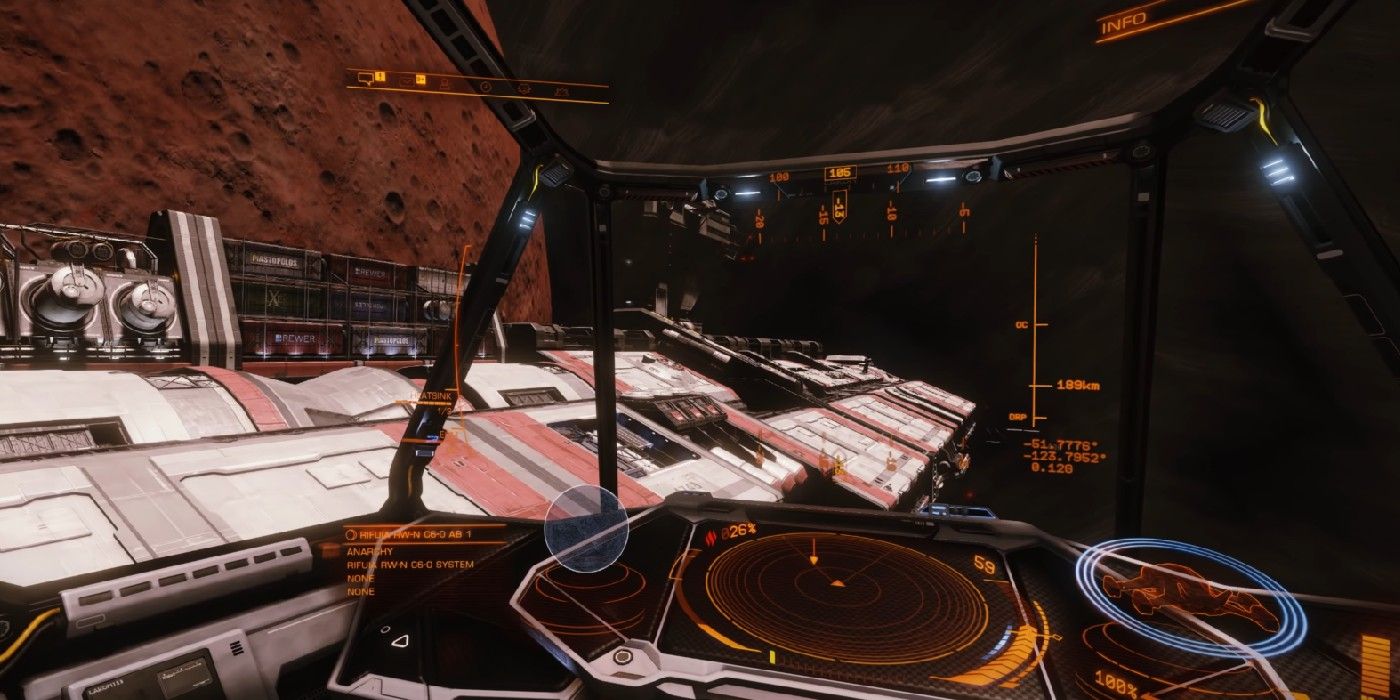 In a nutshell, Fleet Carriers are really big ships. Alright, there is more to them than that. Here are some of the specifics: Fleet Carriers have 16 Landing Pads, they are capable of jumping through hyperspace, and have a cargo capacity of 25,000 tonnes. Fleet Carriers aren’t just sitting ducks either, with 20 defence turret emplacements dotted around their huge surface area.

That all sounds pretty impressive, but with all that greatness comes a hefty price-tag. Fleet Carriers have a weekly upkeep cost that can turn a lovely Elite Dangerous session into a desperate battle as you struggle to pay the loansharks for your ship. Prices start at about 5 billion, although overall upkeep costs can spiral to 25 million a week once everything’s upgraded. Yes. That’s a lot of credits.

You can purchase a fleet carrier at these locations: 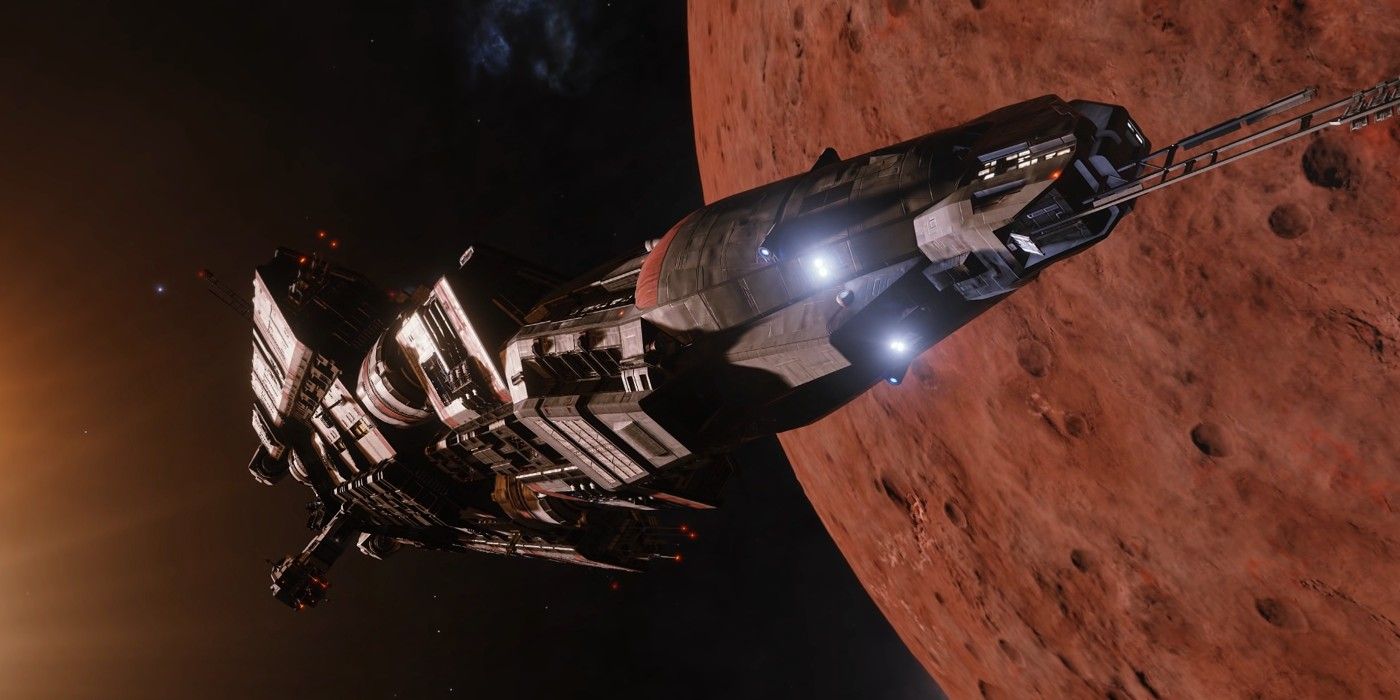 Is it called “afloat” for spaceships? We’re not sure, but regardless of the nomenclature, you’re going to want to make sure all those credits you’ve just invested don’t end up on the scrapheap. That means you need to turn a profit with your Fleet Carrier.

You’re in luck. The Fleet Carrier can essentially become a floating market for other players to use. Any feature you have installed, like a shipyard or outfitting station, can also be used by other players. What this does mean, however, is that your carrier needs to be parked up in the right place, at the right time, pretty much all the time. You sort of feel like you’ve become a full-time used car salesman. In Space.

That being said, Fleet Carriers operate as persistent objects, which basically means they stay where they are whether the player is online or not. They are persistent across every platform, which is pretty neat. This is where the game sort of feels a bit like FarmVille: check back in a couple of hours and see whether your ship has made any profit. Space carrots. Yum yum.

Managing Your Funds And Services 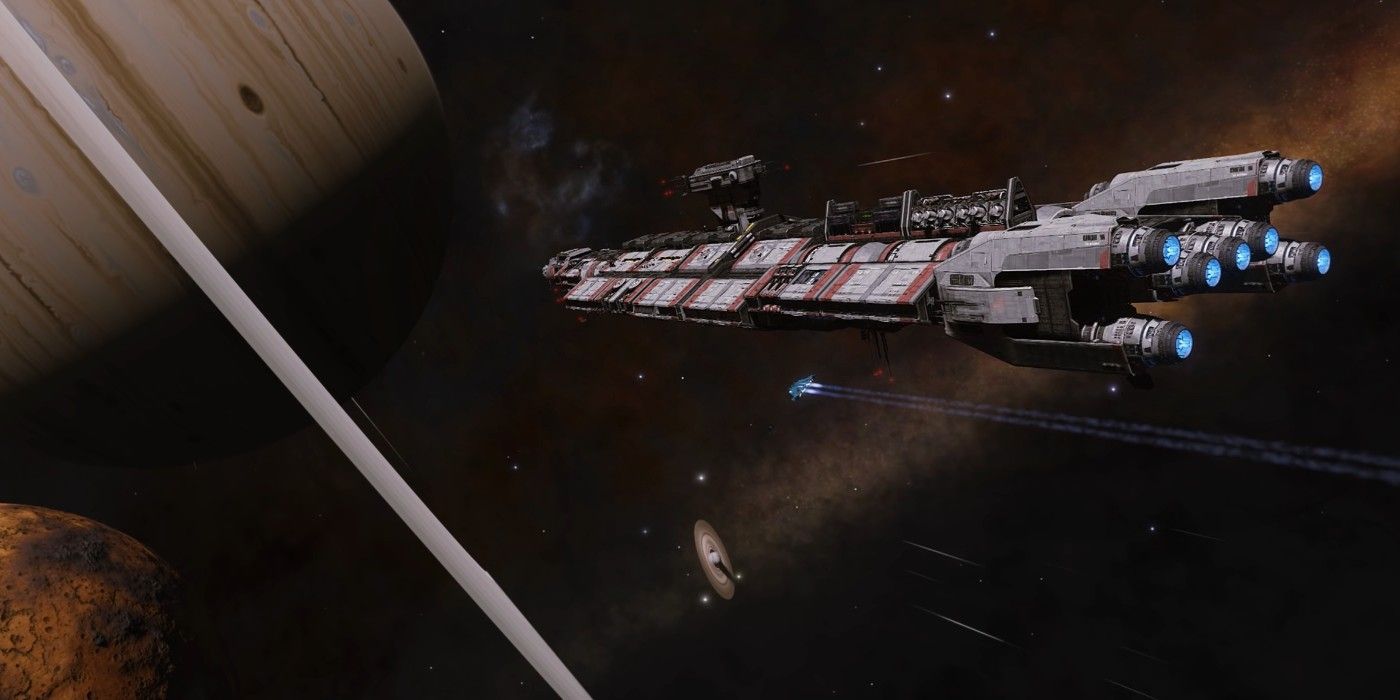 Beyond the initial purchase of the Carrier, you also need extra funds to cover additional costs, general staff upkeep (yes, you have space-staff now), and repairs to keep the ship in tip-top shape after every hyperspace jump.

As the old saying goes, you’ve got to spend money to make money. The Bridge Crew, Commodities Market, and Tritium Depot are all default services that arrive pre-installed in your carrier, but every additional service (like Repairs, Refuelling, and Outfitting, the services that can make the big bucks) will cost you extra. A shipyard, for example, is a chunky 250,000,000 credits.

The Commodities Market is the best place to start if you want to begin making some profit. Park your carrier up in a busy bit of the Universe and wait for players to stop by to see what’s in stock.

Here’s a list of everything you can install on a Fleet Carrier: 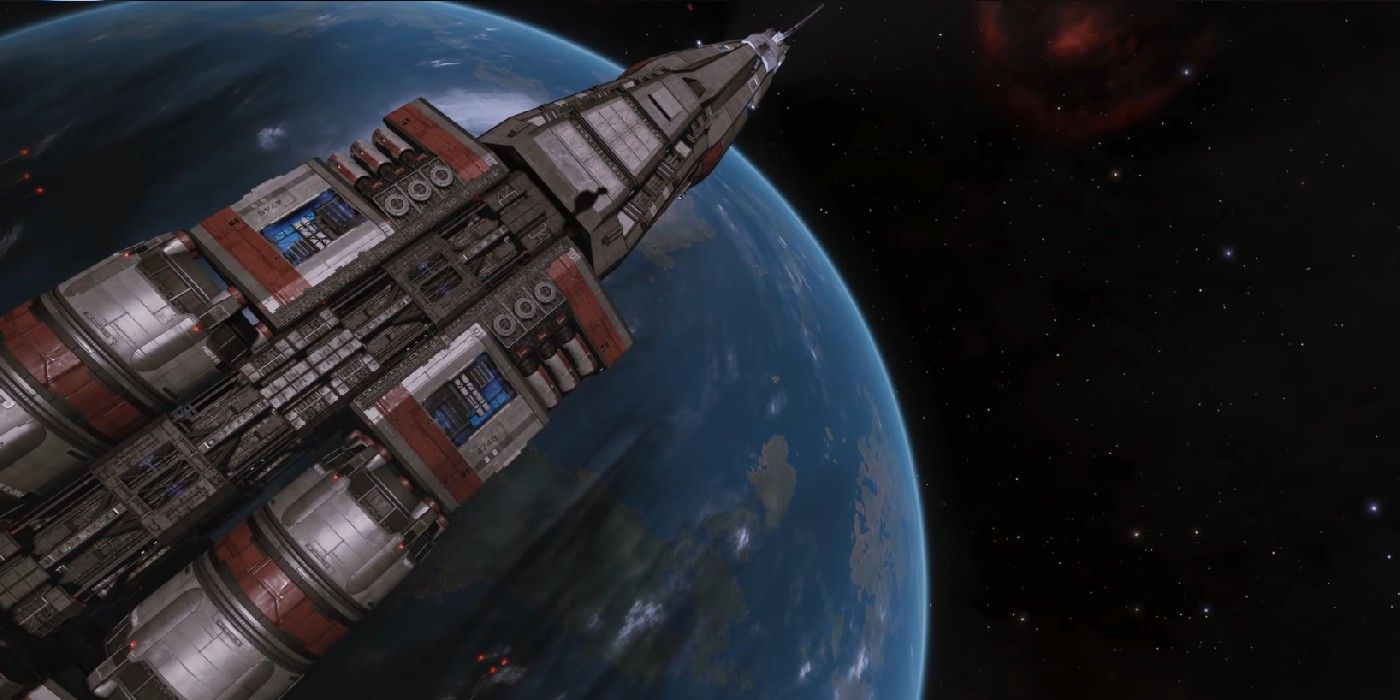 Investing in a Fleet Carrier is a huge expenditure of credits and time. You should only commit to the purchase if you feel like you’ve got what it takes to become a full-time manager of a ship. If you fall short of your payments, you will slowly fall further and further into debt, until the carrier is eventually decommissioned and scrapped. This won’t happen until the owner goes into 250,000,000 credit debt, so there is a bit of wiggle room.

It’s not the end of the world, and you shouldn’t feel too upset as you watch the Recovery Crew take your carrier to pieces, because you will receive a full refund on the cost of your Carrier and any of the installed services. Players can choose to decommission their carrier whenever they want, so if managing your ship just becomes too much to handle, there is a way out. 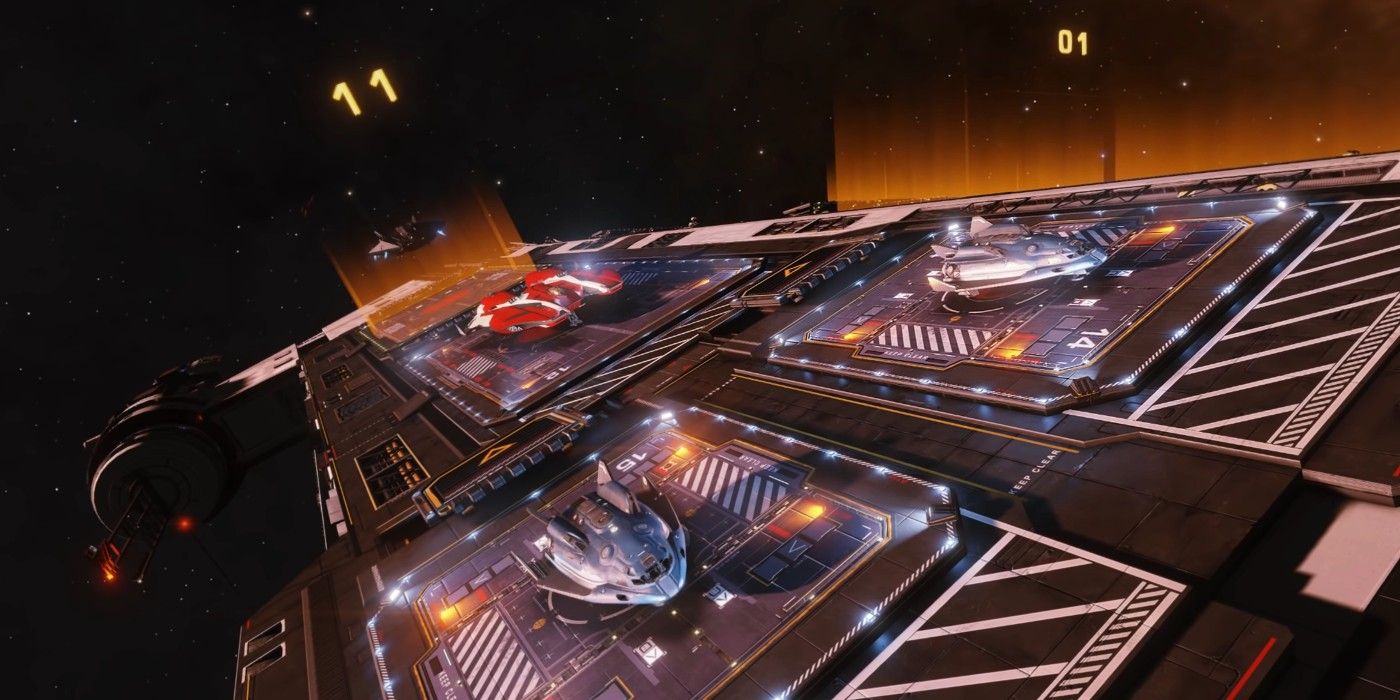 We mentioned the Carrier has some defensive turrets, but they don’t really matter all that much. Fleet Carriers are invincible, which makes sense: the devs didn’t want there to be any griefing to ships that cost 5,000,000,000 credits. Players can blast away at a fleet carrier all they want, but they’ll do no damage, and likely get a returned volley of the carrier’s own weapons.

If they are completely destroyed by your carrier’s weaponry, they’ll be sent to a prison ship. Oh, and if you accidentally shoot your own carrier you’ll be sent to prison as well. So… don’t do that. 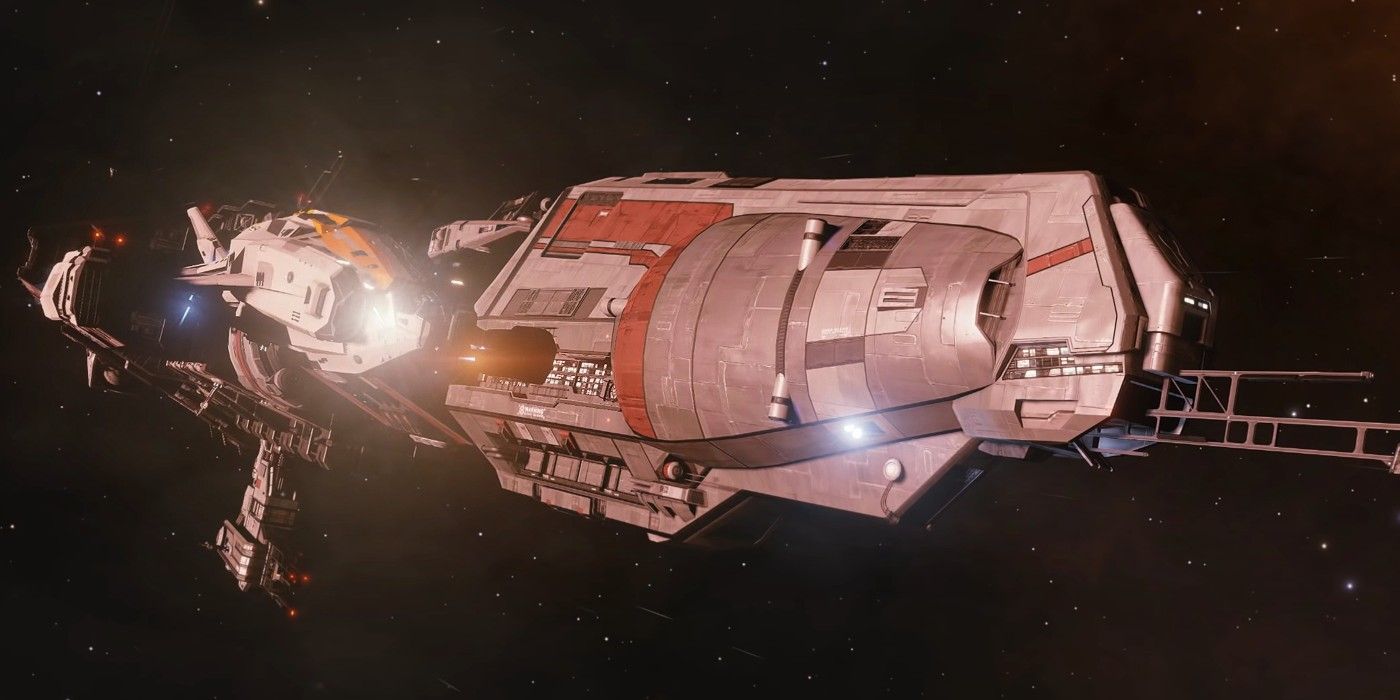 Even though Fleet Carriers are absolutely gigantic, they can jump through hyperspace just like their little siblings. They have a range of 500 lightyears and it will take a carrier about 15 minutes to prepare for the jump, with a five-minute cooldown on the other side. You don’t need to be docked with your carrier to jump, you can navigate remotely via the map.

Each time the carrier jumps it takes a bit of a bruising, like throwing an apple (gently) at a brick wall. You will need to repair the ship each time, otherwise it might just fall out of space. Likewise, you need to keep the ship fuelled with Tritium, which can be mined, purchased, or donated to your carrier by some friendly space citizens whenever they dock.

Do You Need A Fleet Carrier? 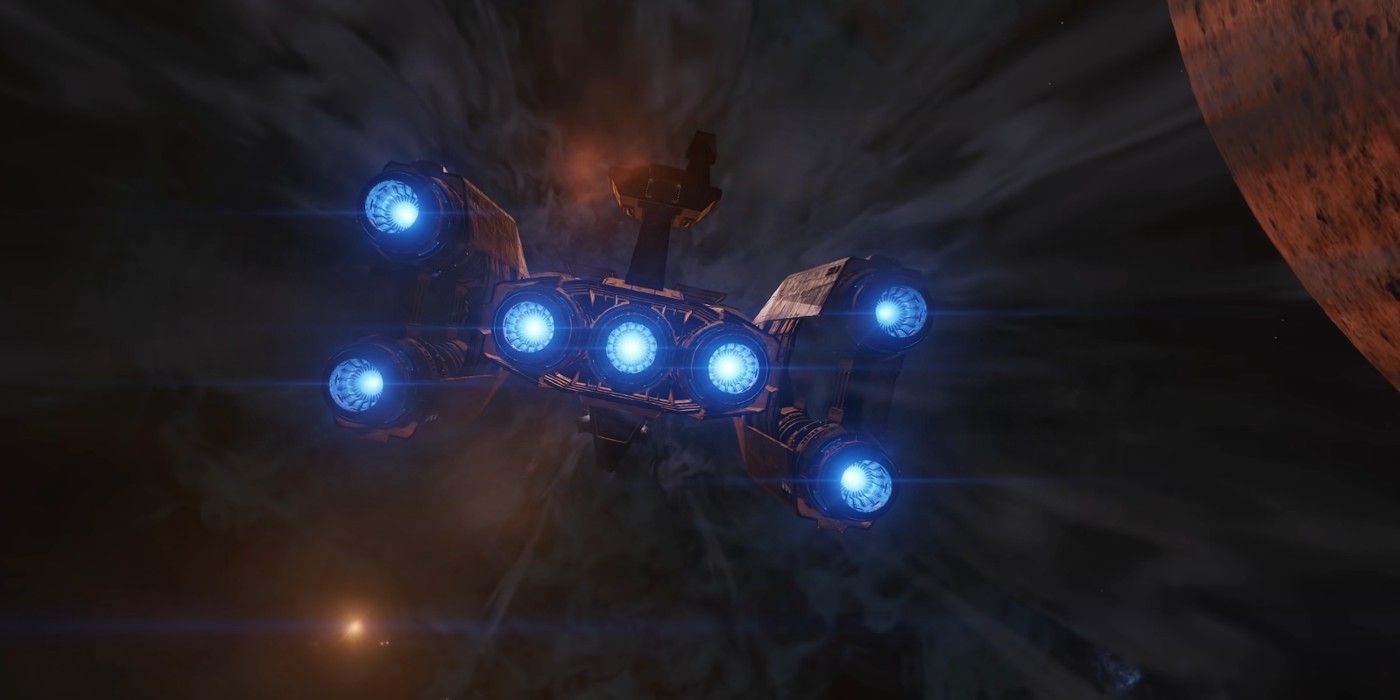 In short, no, you probably don’t need a fleet carrier. The big ships do offer a lot of conveniences and personal storage, places to manage your fleet of ships, and even the chance to offer a lot of profit, but the initial investment and the bit of hard work required can put some players off ever bothering with a carrier at all.

At the same time, why wouldn’t you want one? Fleet Carriers are pretty much the emblem of everything possible in Elite Dangerous, a game with immense scale and potential, crowned by these absurdly giant ships. You’d might as well. Isn’t that the whole point? 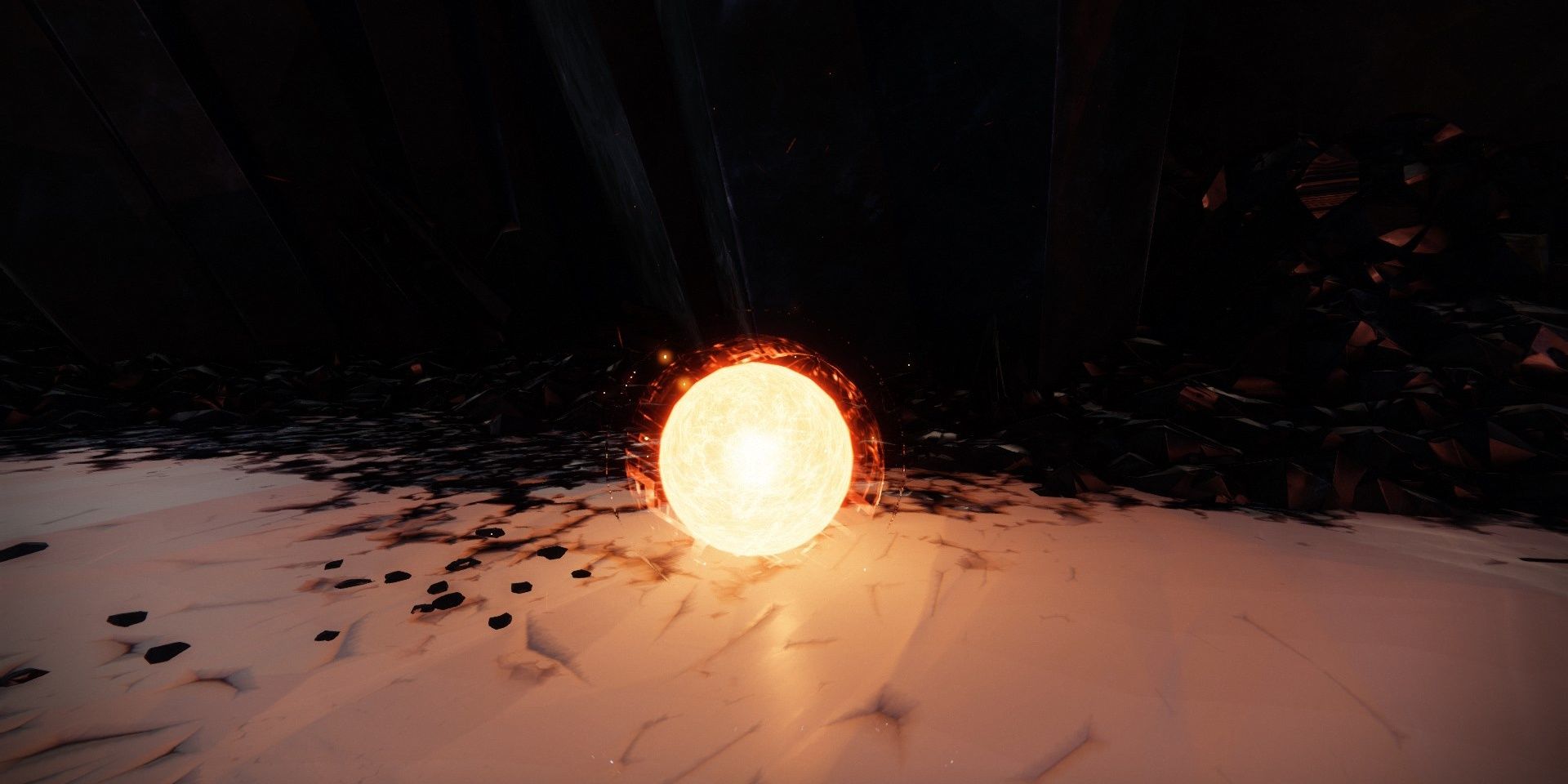