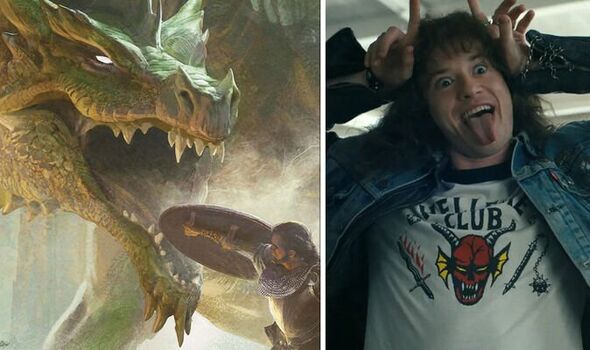 The final two episodes of Stranger Things Season 4 are available to stream on Netflix. Season 4 introduced viewers to the Hellfire Club, which is the official Dunegons and Dragons group of Hawkins High. A favourite pastime of Dustin, Mike, Lucas and Will, D&D plays an important role in Stranger Things, especially when it comes to identifying monsters and their weaknesses. If you want to create your very own version of the Hellfire Club, or simply wish to embark on a Stranger Things style adventure, this is what you need to kickstart your journey into the world of Dungeons and Dragons.

Dungeons and Dragons is a fantasy role-playing game where imagination is key. After creating their characters, players embark on a perilous journey full of magic, monsters, and lost treasures.

What happens on the adventure is dictated by the Dungeon Master, who serves as a storyteller of sorts. Using a campaign book, the Dungeon Master sets the scene, interprets and relays the rules, and voices any of the non-playable characters you’ll meet along the way.

The outcome of monster battles and other major moments are dependent on the roll of polyhedral dice, as well as your character stats.

For a more detailed explanation, check out the video below for a thorough walkthrough and guide. If you’re still keen to get started, then check out the starter kits further down the page.

The Dungeons and Dragons Starter Set includes everything you need to get started with your first D&D game. It includes an introductory rulebook, a 64-page adventure book that will take players from level one to level five, six pre-generated character sheets and six dice.

“Choose from a halfling rogue, seeking revenge against a traitorous ally. An elven wizard, called to duty by the god of knowledge – altogether five characters are ready for adventure, and great models for future characters.

“The Dungeon Master is the game’s narrator and referee. You’ll play the roles of the monsters and villains your players encounter as they battle and plunder their way through Neverwinter in the The Lost Mine of Phandelver adventure.

“In D&D, the story is guided by your actions, and your actions are guided by the rules. Harnesses your imagination and invite your friends to explore a fantastic world of adventure, where heroes battle monsters, find treasures, and overcome quests.” 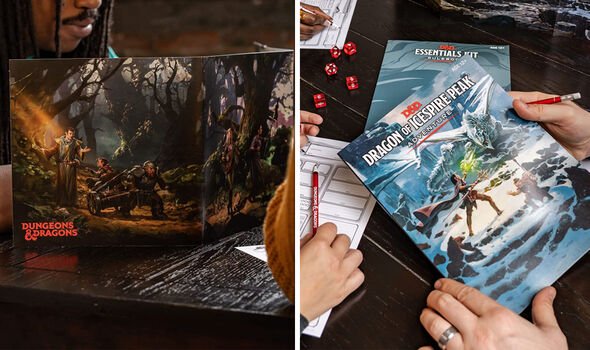 An ever so slightly more expensive alternative to the Starter Set, the Essential Kit contains one or two extras that I believe will better benefit new players. In addition to a rulebook, adventure book, six character sheets and 11 dice, the Essential Kit also contains a double sided map, which helps new players visualise the adventure.

You also get 81 item and sidekick cards, which further aid understanding of how the adventure works. Likewise, the pack also comes with a dungeon master screen, which allows the DM to easily check the basic rules as you progress.

“Take on the Dragon of Icespire Peak,” reads the official story description. “Preying on anything it can catch with its claws or freeze with its icy breath, Cryovain, the young white dragon has descended upon the Sword Coast. Driven from their usual territory, all number of beasts have begun terrorizing the mining town of Phandalin. 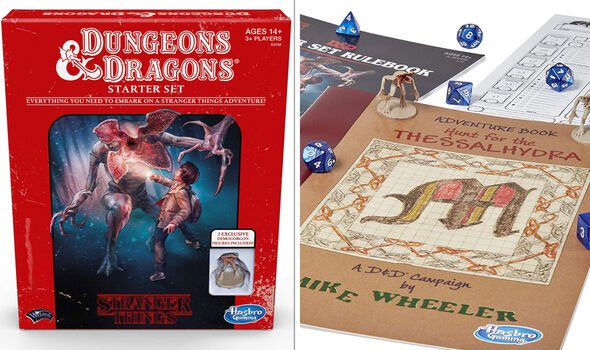 “The Stranger Things Dungeons & Dragons Starter Set contains everything players need to embark on a Stranger Things adventure including the essential rules of the roleplaying game.

“Things character Mike Wheeler has created for his friends. Pick your character — will you be Will the Wise or Dustin the Dwarf? Get your fireballs ready as you investigate the mysterious castle and battle the ferocious Demogorgon. Prepare for just about anything, because the game just got stranger.”