The Five Nights At Freddy’s series has always been full of hard-to-find secrets. Between several secret mini-games after the jump scares to hidden objects within the games themselves, there’s always something new to keep an eye out for. Security Breach is no different, and as the franchise’s first open-world game, it only allows even more secrets to crawl through.

While different collectibles and paths run rampant in this game, there is plenty to keep you running around in circles while you chase after one of the six different endings. There are plenty of Easter eggs hidden within the pizzaplex too as you play, and some of them are easy to miss. 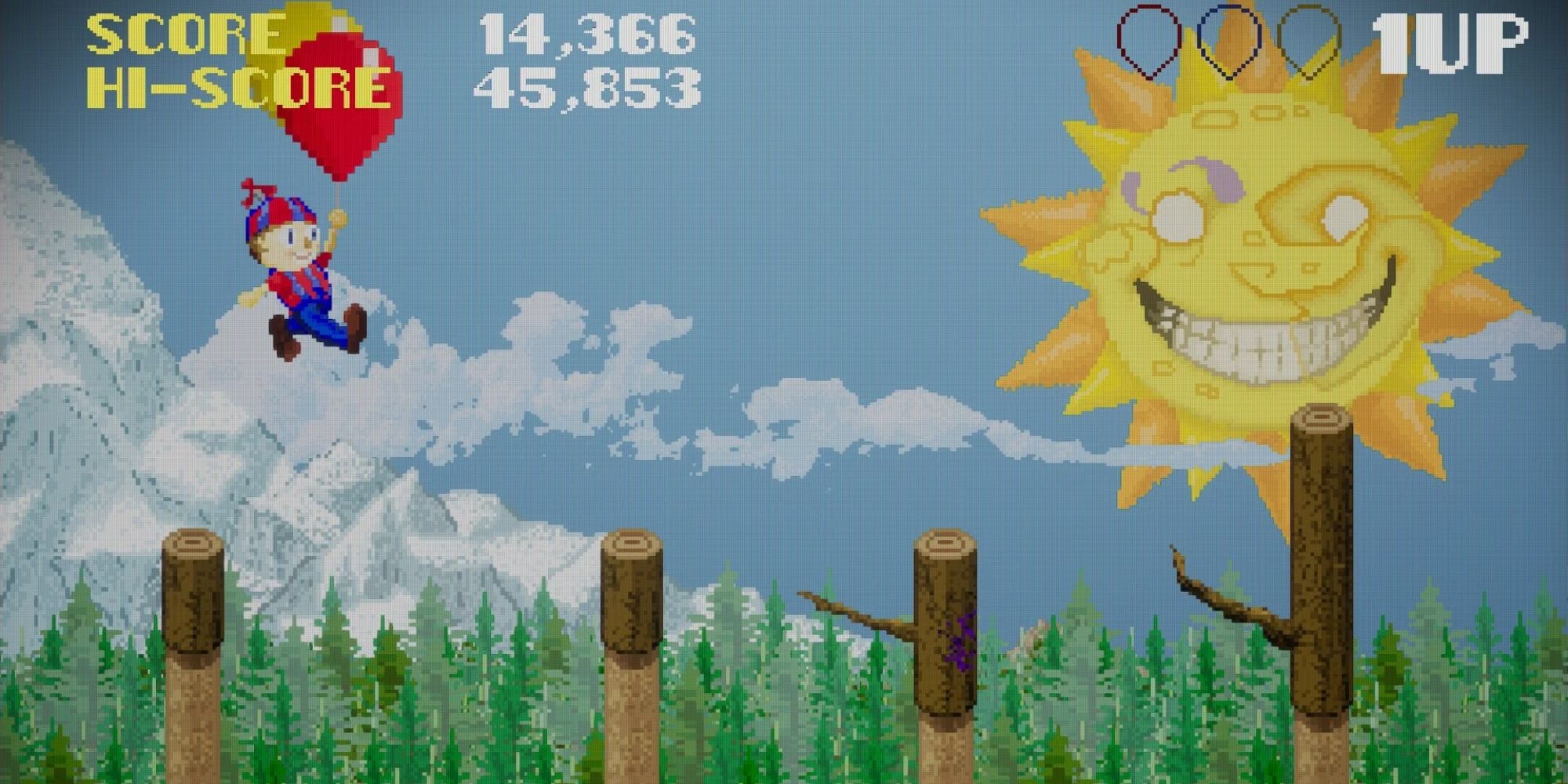 One secret that is almost impossible to discover on your own is the secret room in the daycare. After getting the faz-cam you can follow the necessary steps to unlock the door, which shows you the room behind the daycare’s balcony. Along with a few collectables, one of the working arcade machines is hidden back there, which will let you play Balloon Boy’s World.

With a game style similar to the popular mobile game Flappy Bird, you play as Balloon Boy floating with his balloons and avoiding obstacles. If you play long enough, you can even glitch the game and discover a corrupted version of the Daycare Attendant.

9 Who Leaves Pizza In The Sewers? 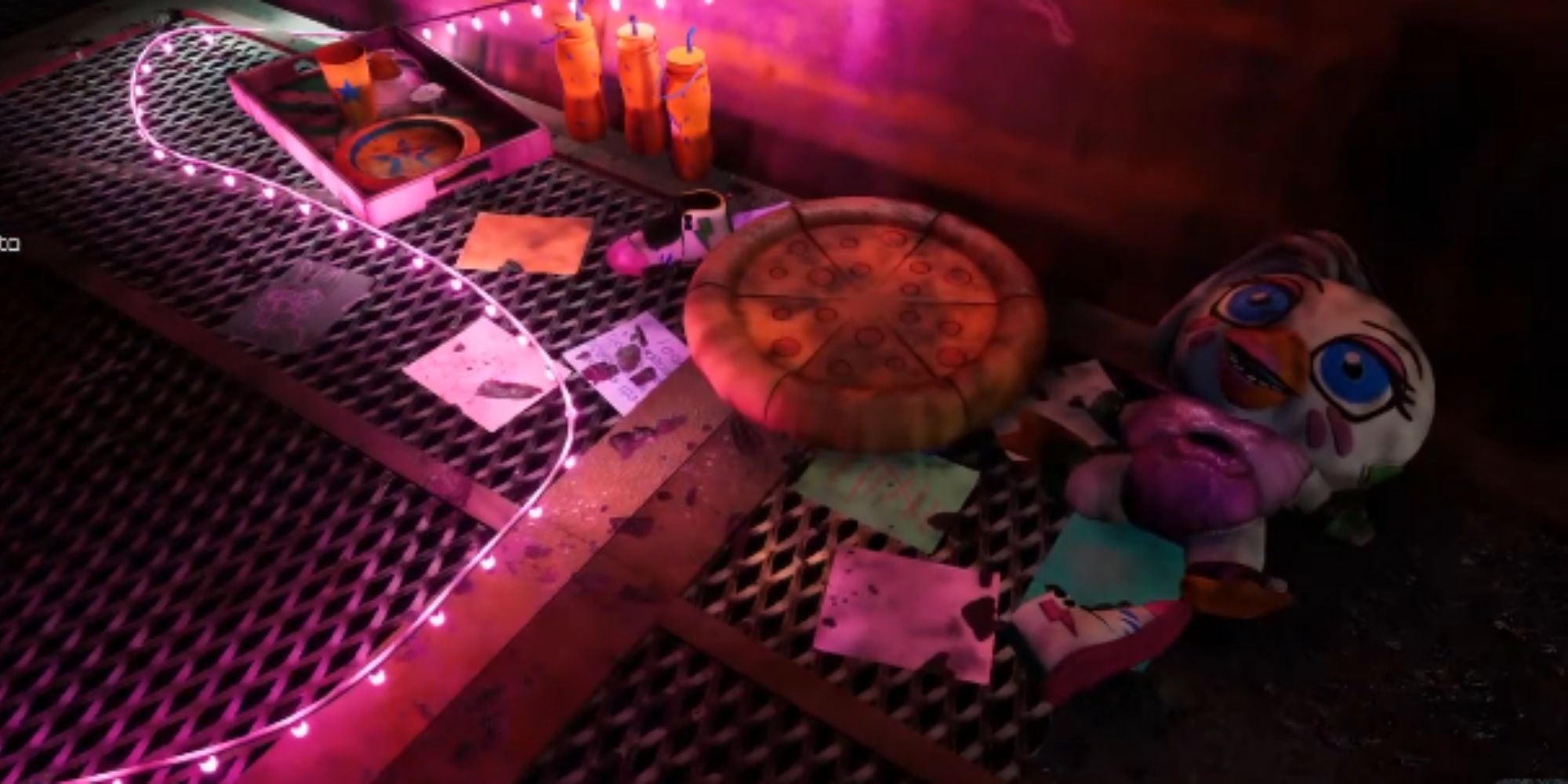 After destroying Chica in the trash compactor, you fall with her into the sewers and now need to make your escape. There are several areas of note within the sewers alongside the collectibles, but one of the more notable locations and harder to notice ones is a small shrine hidden in a tunnel by the first generator, which is covered in both Chica and pizza-related items.

It seems the developers leaned into the theories and memes that Chica likes pizza and hid this around the Chica-related area as a bonus for fans to find. The pizza could also be a nod to other sewer dwellers and pizza lovers, the Teenage Mutant Ninja Turtles. 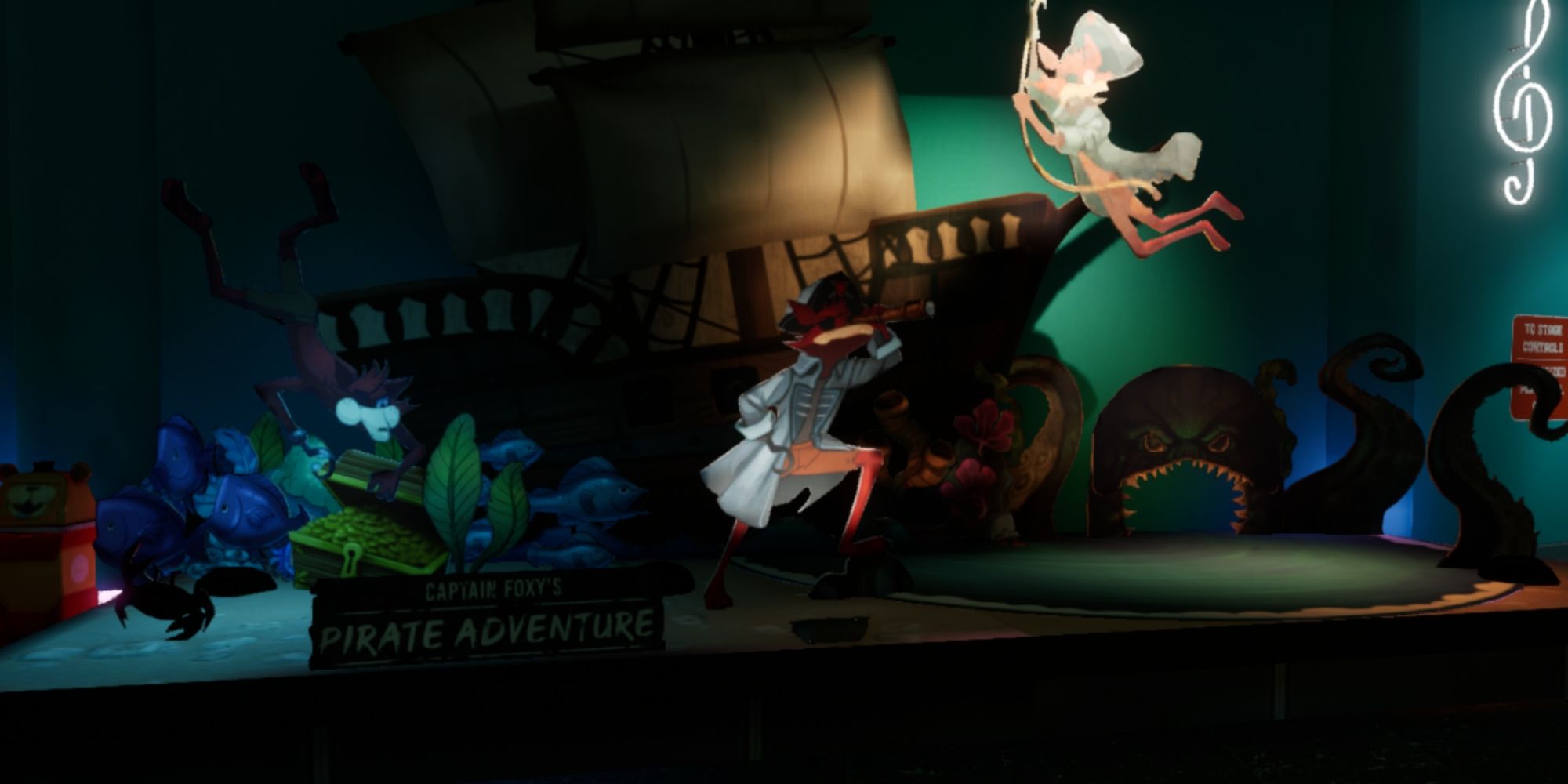 One of the notable and scariest animatronics from previous games, Foxy, is missing from the game without any explanation as to why. However, there are a lot of references to one particular mini-game of his within the previous game, Help Wanted.

Captain Foxy’s Pirate Adventure is seen everywhere, from a display in Rockstar Row to the entirety of Kid’s Cove. There are even some cutouts from the mini-game in the backstage area, found in old storage closets along your path to the rehearsal room. Whatever is up with Foxy, it’s clear he’s somehow still involved with the pizzaplex.

7 Play A Few Rounds Of Golf For Throwbacks 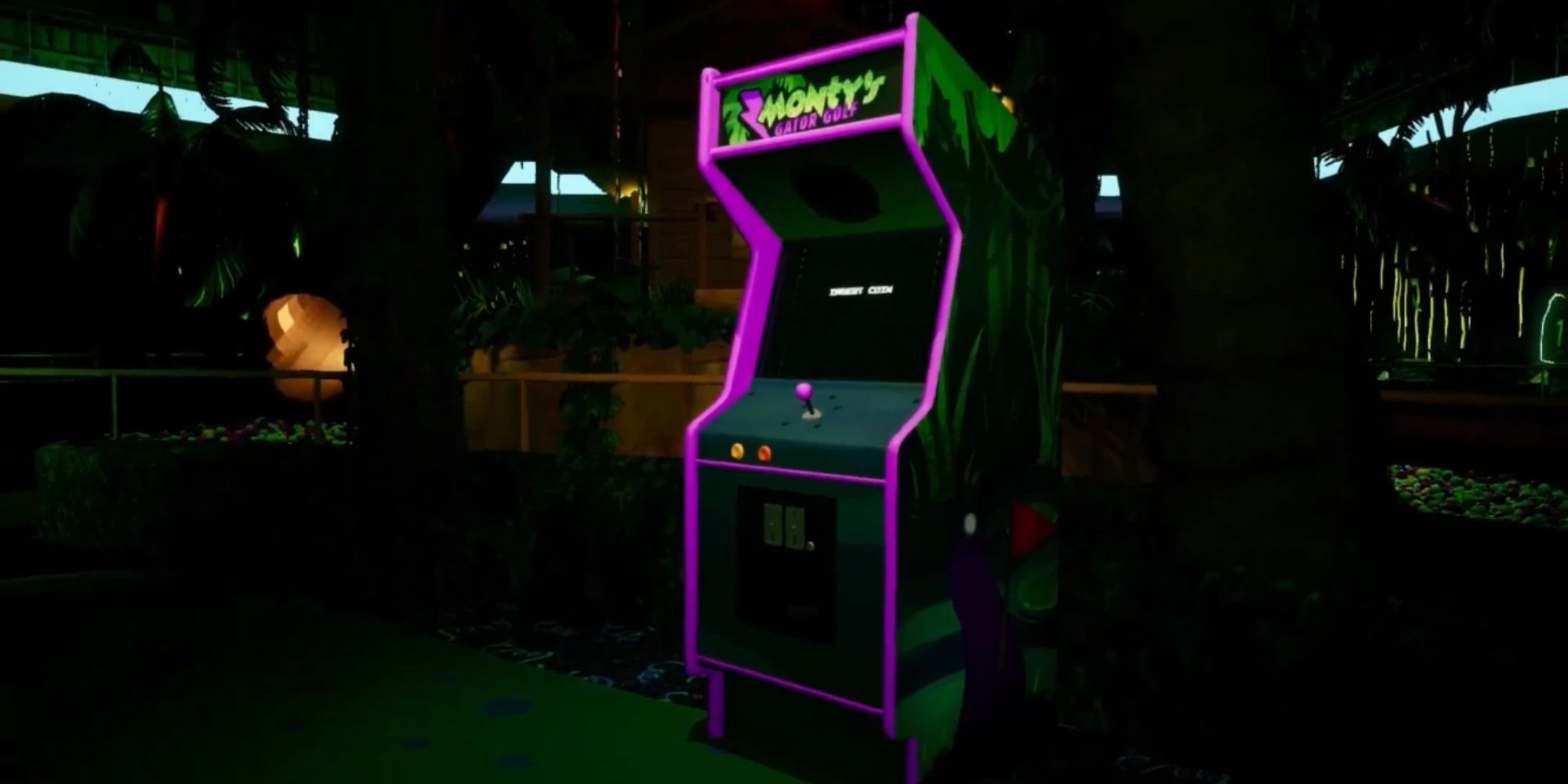 One of the main attractions in the pizzaplex is Monty’s Gator Golf. You won’t have access to it until later in the game, but you can fully explore the entire golf course if you can get around all the bots hunting for you. However, the real easter egg isn’t on the actual golf course, but an arcade machine you can find inside.

It is a playable golf mini-game and gives you nine different holes to play. While the first hole is modeled after Gator Golf itself, each subsequent hole is designed as one of the other FNAF games, giving you a little easter egg from each.

6 The Final Boss Location Is More Than What It Seems 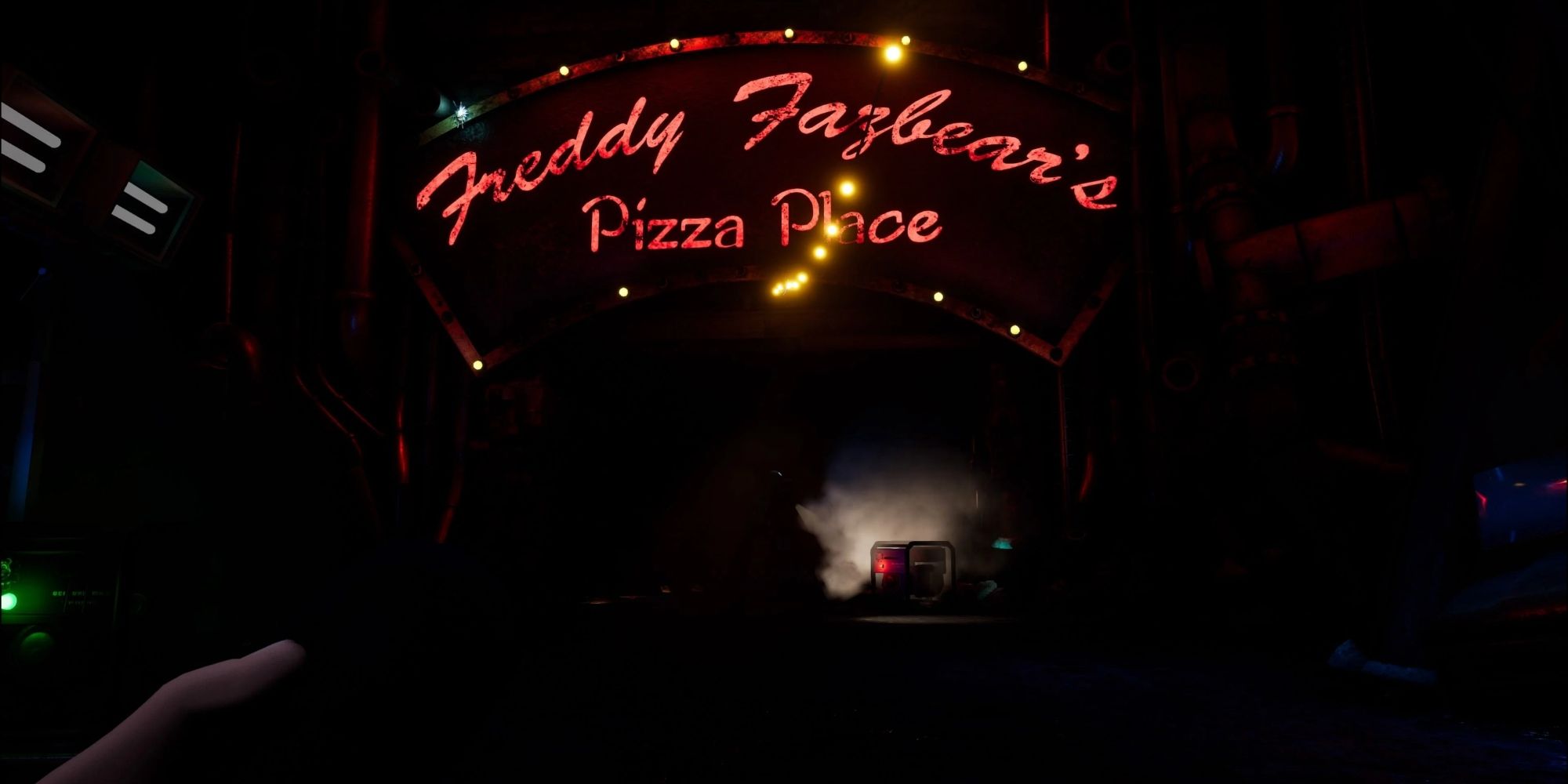 There is one true ending in Security Breach amidst the others, taking you deep underground in a hidden elevator to access the final boss. After going through a long tunnel and turning on every generator you run into, you’ll discover Freddy Fazbear’s Pizza Place.

This specific name is the same restaurant as the one in Freddy Fazbear’s Pizzeria Simulator, which burned to the ground in an attempt to finally get rid of the person behind all of the murders, William Afton. However, it seems he’s still pulling the strings in the pizzaplex when he appears for the final boss battle.

5 Secret Room Identical To One In Sister Location 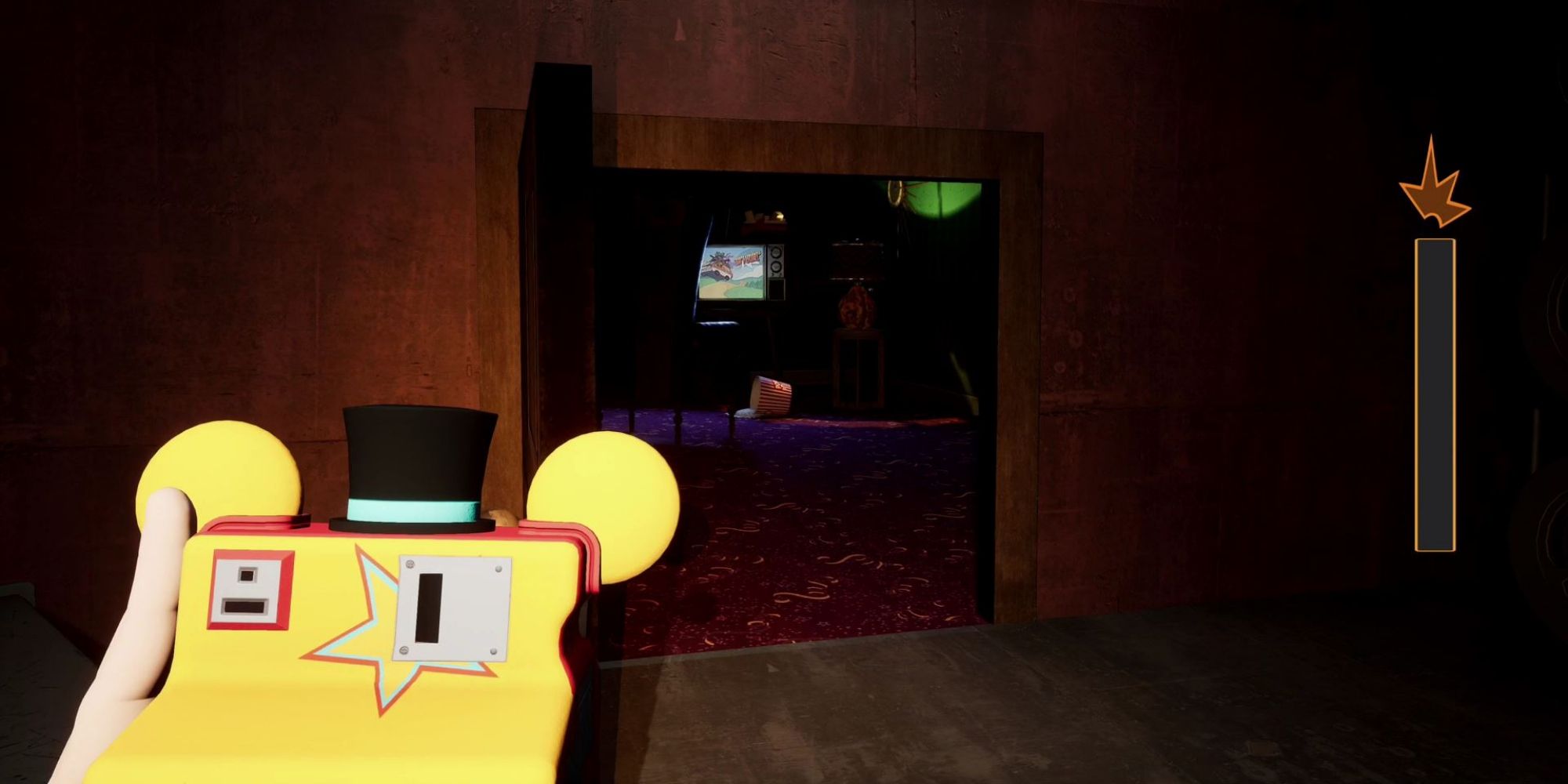 At the end of every shift in Sister Location, you find yourself in a living room watching a strange soap opera on the TV. An identical room to this can be found within the pizzaplex with a small hidden door only accessible with the faz-cam.

The room is nearly identical to the living room in Sister Location, exotic butters and all, besides the few secrets within like the CD player that will let you play all the CDs hidden throughout the pizzaplex. 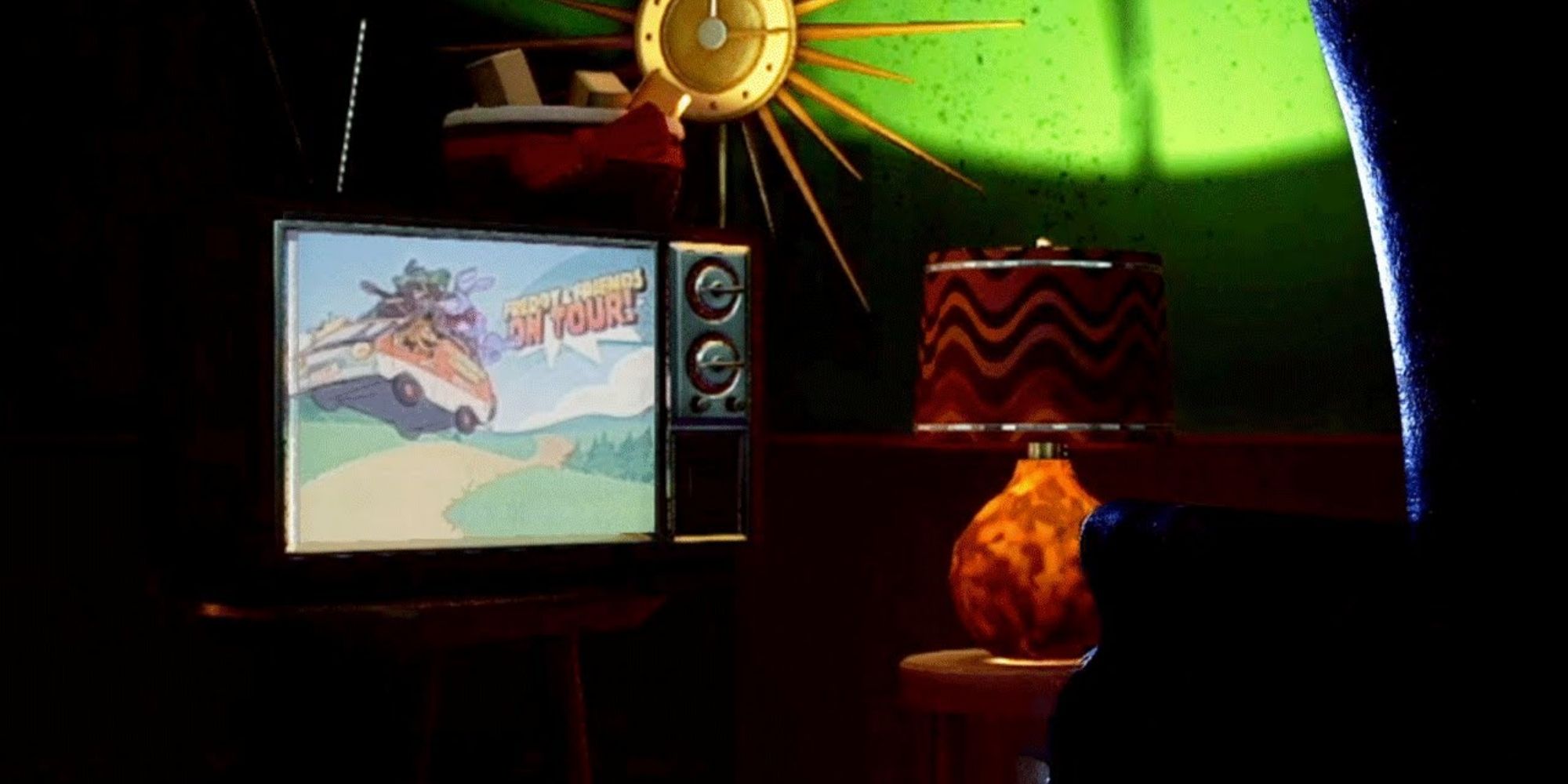 In the hidden Sister Location room, the TV holds an Easter egg of its own. What’s playing on it is a Freddy cartoon, a reference to the promotional material the developers had created for the game called Freddy and Friends On Tour.

Not only is it a reference to that, however, but it’s a hint for one of the secrets of the room. The wallpaper is covered in a strange pattern that is actually a code, and there are hints within the promotional cartoon that helped fans finally decode it. Without these hints, it might have never been solved properly. 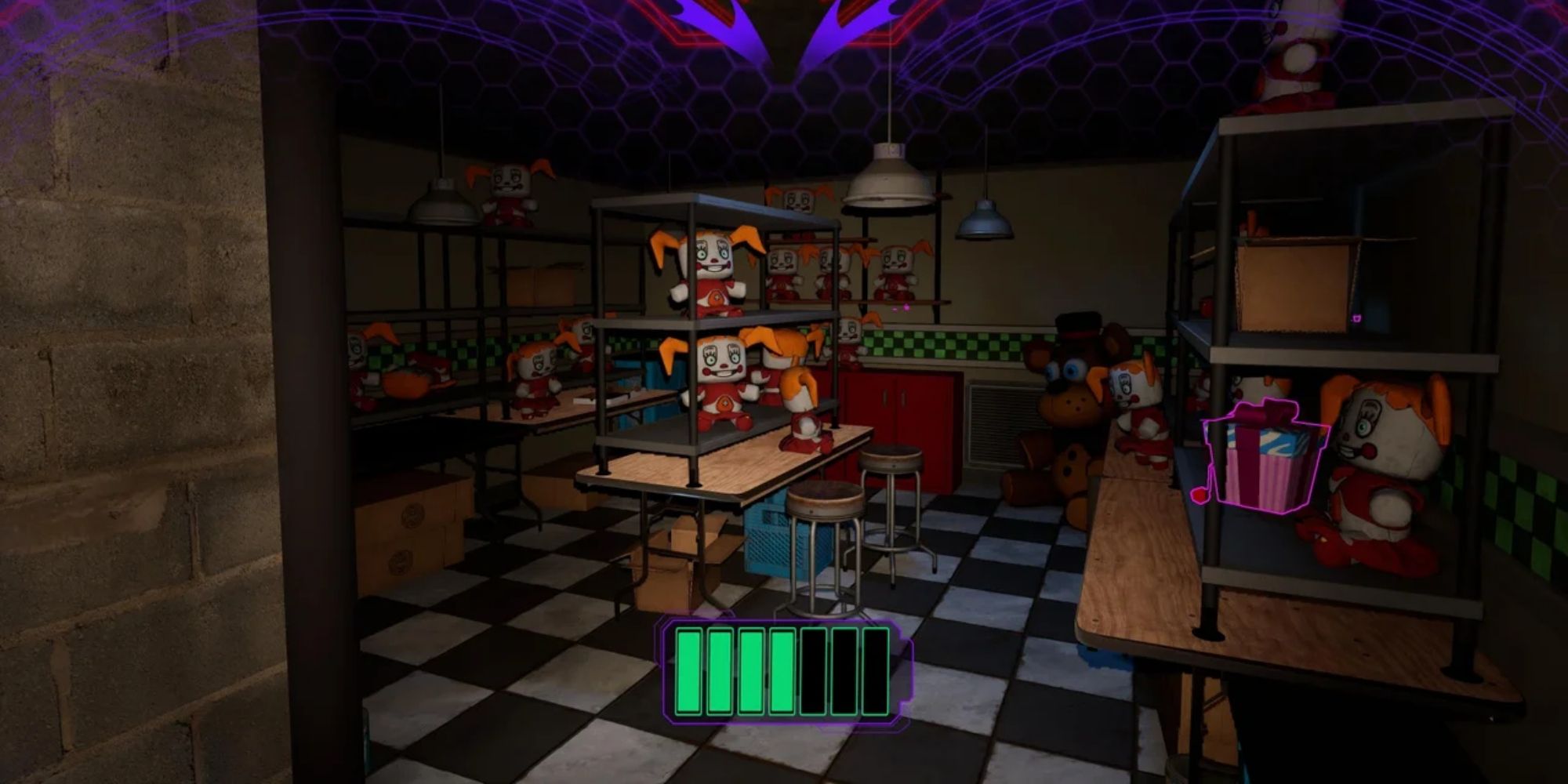 Steel Wool Studios helped develop the last few FNAF games, namely the VR Help Wanted and Security Breach. The studio couldn’t help but bring in many references to their previous game, even though Help Wanted was a VR game and not a physical pizzeria.

Once you fully upgrade Freddy you can get past the Chica and Monty gates in the maintenance tunnels, revealing several different rooms that are callbacks to the VR game. This includes a room full of Plush Babies, a room that looks like the Mangle Repair mini-game, and a room styled after the Curse of Dreadbear DLC.

2 A Reference To Those Who Started It All: The Aftons 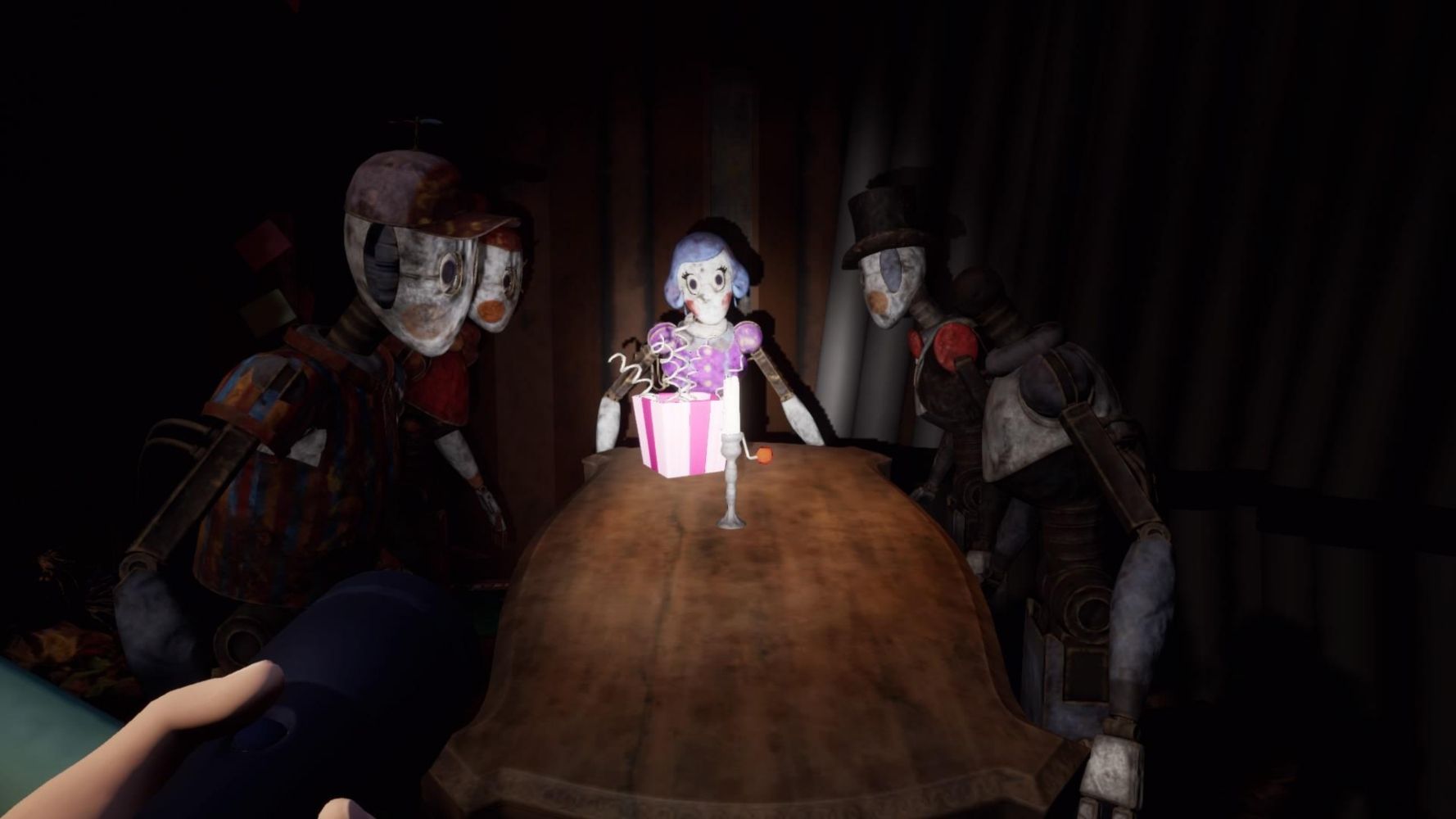 An easy-to-miss easter egg in the sewers is a reference to the Aftons, the family that is at the center of the plot of most of the FNAF games. However, if you don’t know the lore or if you’re too focused on trying to run away from Chica and Vanny, you might slip past it unnoticed.

After falling into the sewers with Chica and running into a room covered in paper and strange notes, you can find a small family of robots set up around a table just off of the stairs, each bot modeled after a different Afton family member and their most notable lore. 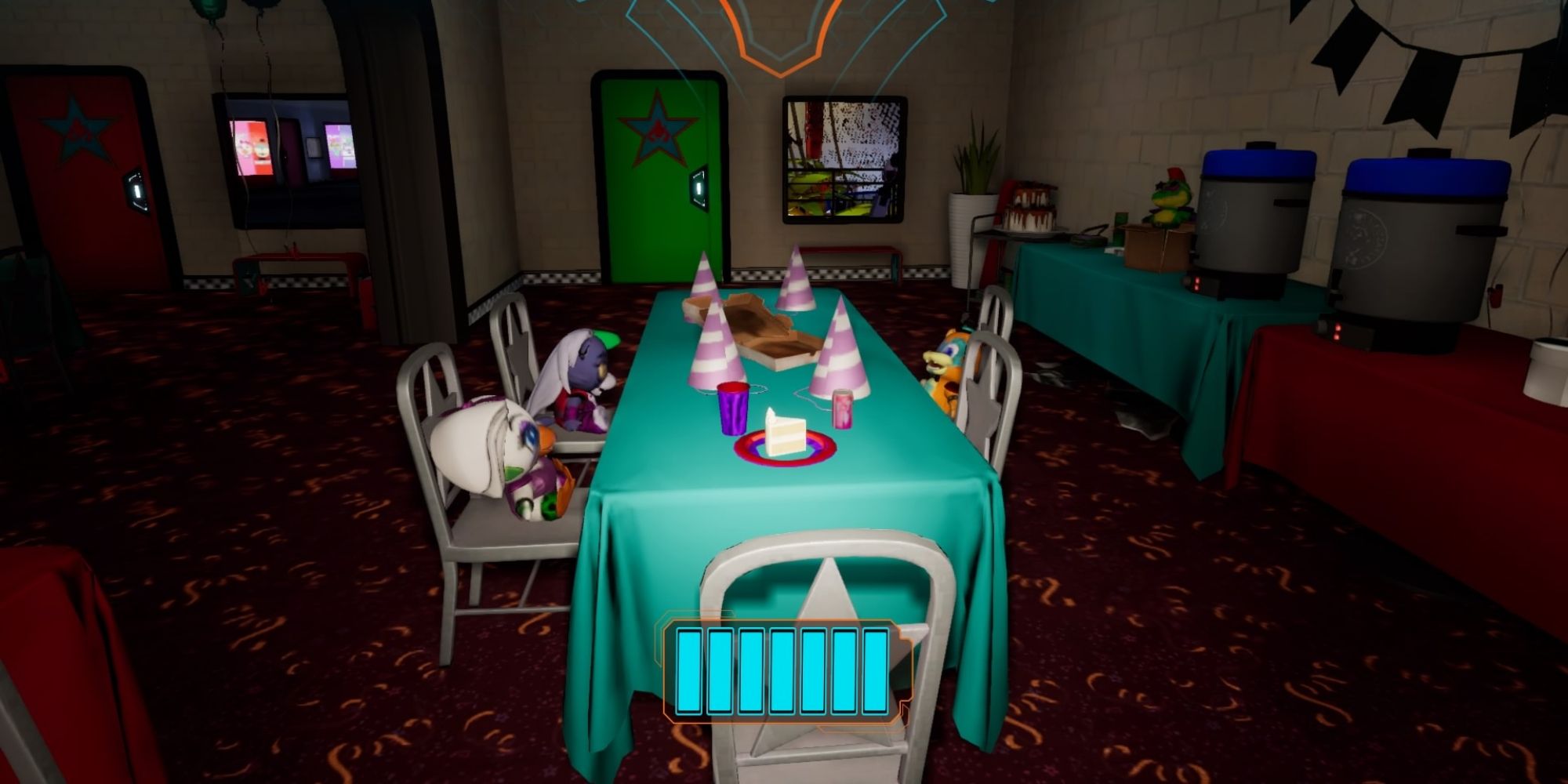 It is clear since the first FNAF game that some of the series' inspiration came from a real-life place, Chuck E. Cheese. While there were never murders there and the robots certainly never came to life, the developers decided to place a fun easter egg referencing one conspiracy theory surrounding Chuck E. Cheese, which is that they recycled their pizza.

Supposedly, the pizza slices never lined up right to make a perfect circle. You can find a note in the daycare area about an angry mom believing the pizza is recycled, a small nod to the other company, and one you’d never know about if you didn’t already know about the conspiracy.