Flesh and Blood weapons might not be the first thing you think about when you think of this trading card game. But if clothes maketh the man, then weapons maketh the warrior, and combat is no less intense when it takes place in cards instead of pixels.

With nine classes and hundreds of cards to choose from, there are as many ways to build a deck as there are players. Every successful deck has one thing in common: the weapons to get the job done. Whether you gravitate towards a hard offense or a powerful defense, your victory is all in the cards. 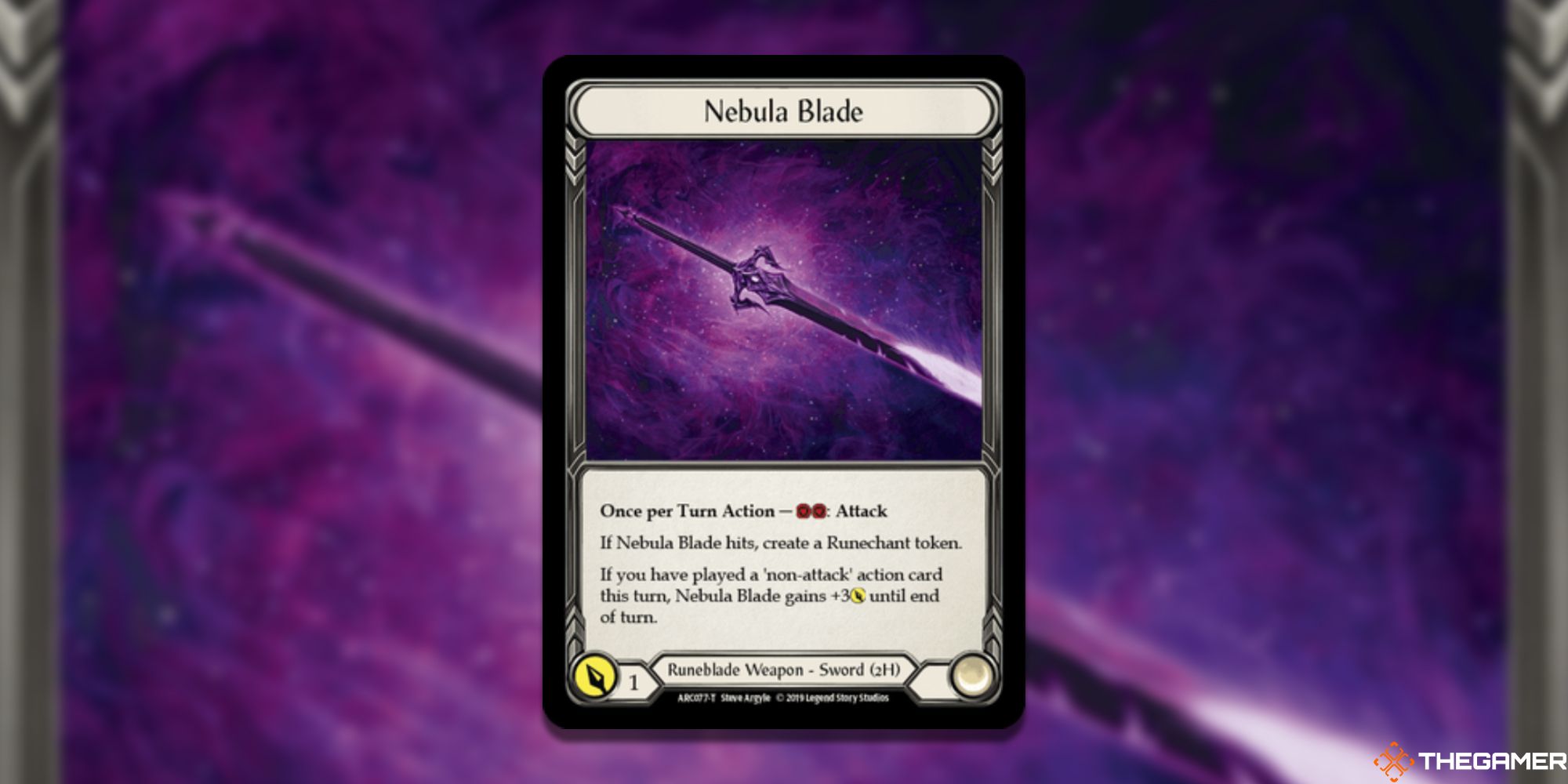 Nebula Blade can be applied in two different ways, both of which provide a powerful boost to your attack. When the card hits, it creates a Runechant token. Runechants are their own form of arcane damage, and when accumulated, can create a wave of destruction once triggered.

If Nebula Blade is played along with a non-attack card, a strength of plus three is added instead. By itself, the card has a strength of one, so this effectively quadruples its attack power. It is worth noting this boost is only applied once for the turn, so prudent usage is important. 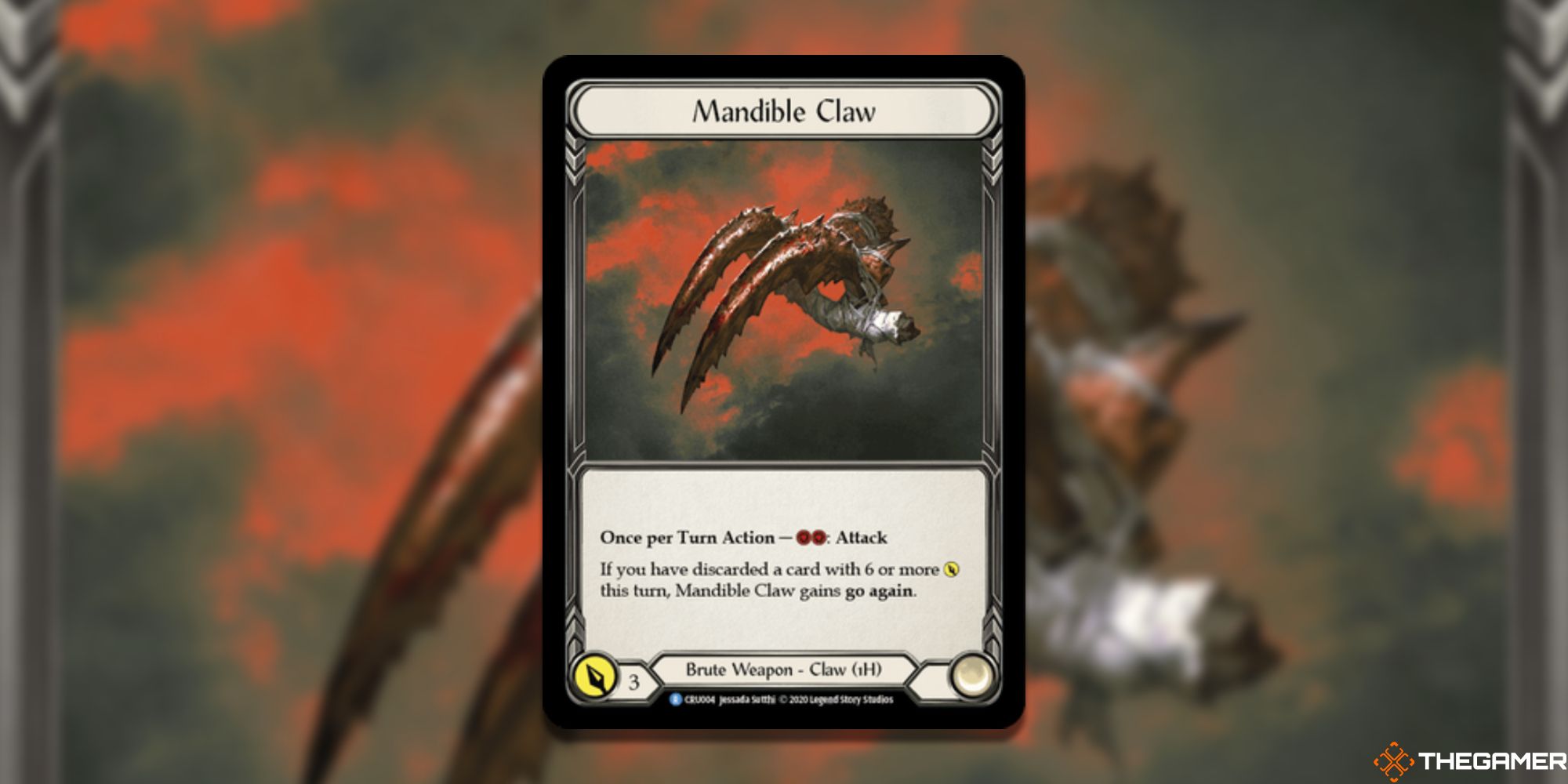 This Brute class card might seem underwhelming at first. For the cost of two resources, you can make an attack.

What sets it apart is the ability to go a second time if you pitch a card worth six strength or more in the same turn. Where the card really shines is setting up a powerful attack for the late-game or, ideally, to finish the game.

Pair the left and right Mandible Claw cards to pack a powerful punch twice in a row, often resulting in double-digit damage that can take your opponent out quickly. 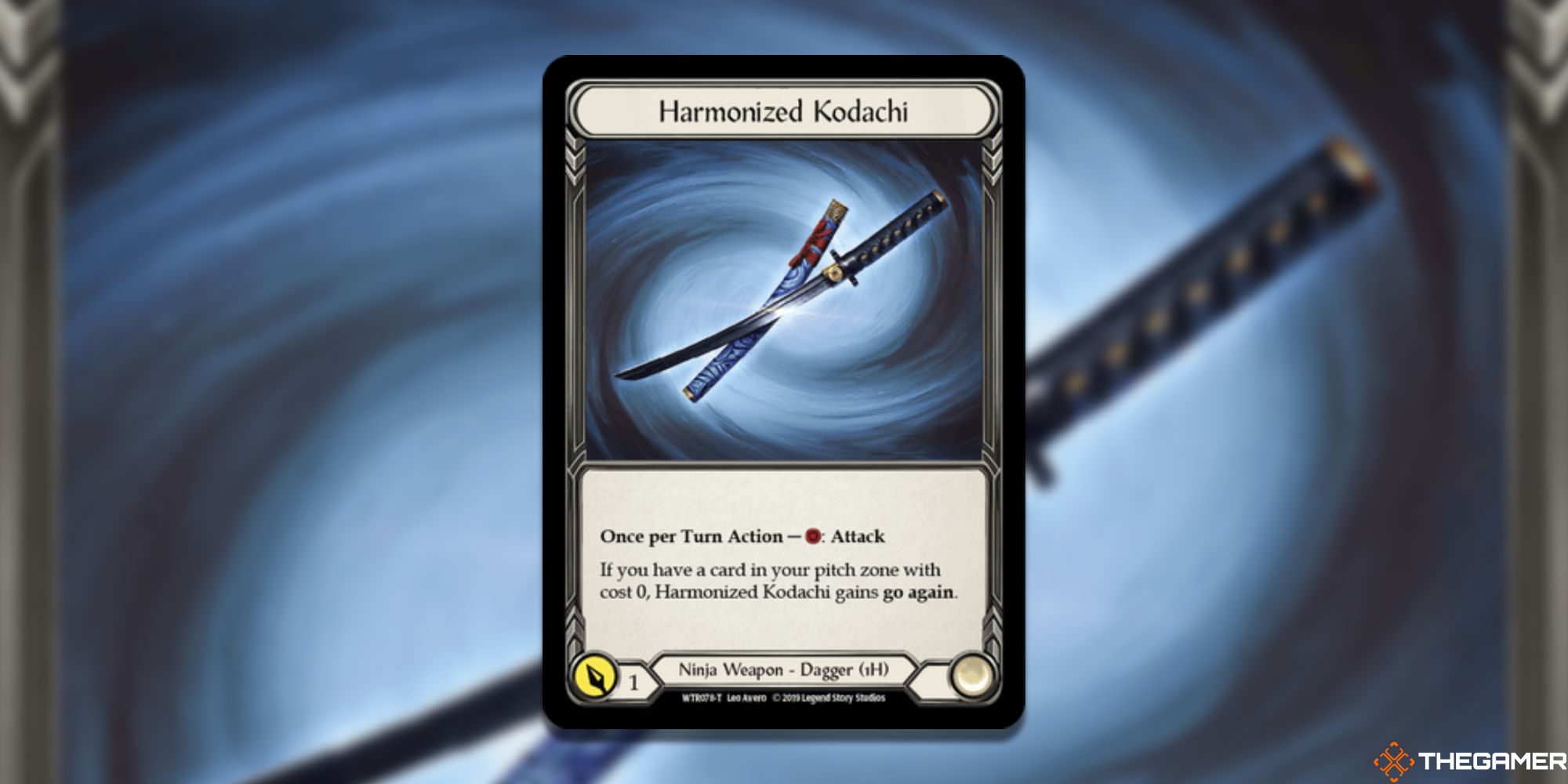 Strong in its own right, Harmonized Kodachi can go again if a card with a cost of zero is pitched. This will result in one action point, a dividend that sets you up for the next action.

Because Harmonized Kodachi is a single-handed weapon, you can equip one in each hand. This will result in four attacks, two action points gained, and a valuable impact on your offense. Applied at the right time, it can do a healthy amount of damage, or knock down a four-deep barrier, all for the low cost of one action point per card. 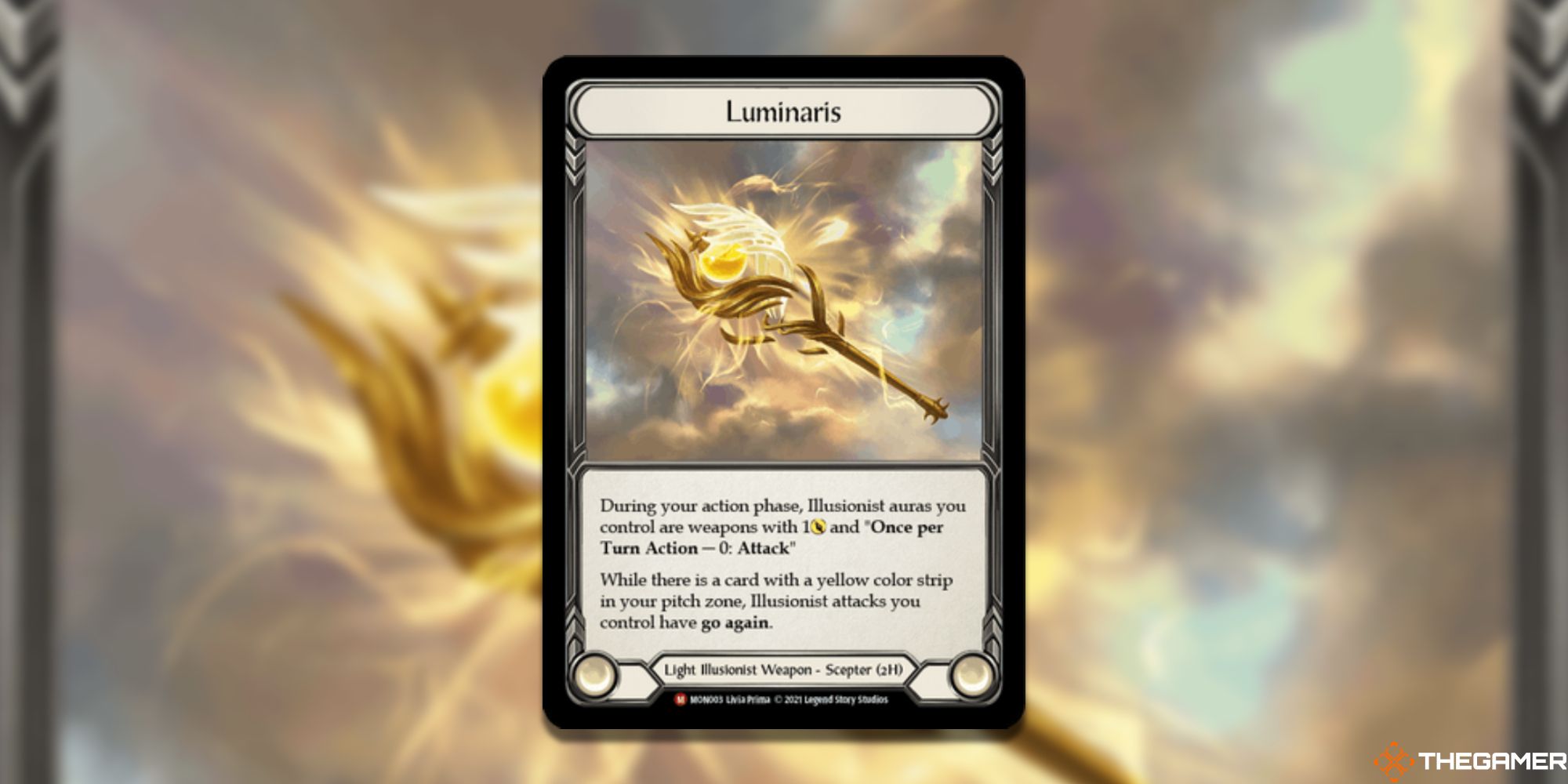 If you play Luminaris, every Illusionist aura you control becomes a weapon with one strength. These additional weapons cost zero and are restricted to a single turn. Unless there is a card with a yellow stripe in your pitch pile, that is, then your newly armed Illusionist aura weapons will be able to deal a second wave of damage.

Luminaris is a card that gets the most impact when used with a large amount of patience. The more Illusionist auras you can control before playing it, the larger the potential impact. Just bide your time and hold onto that yellow line. 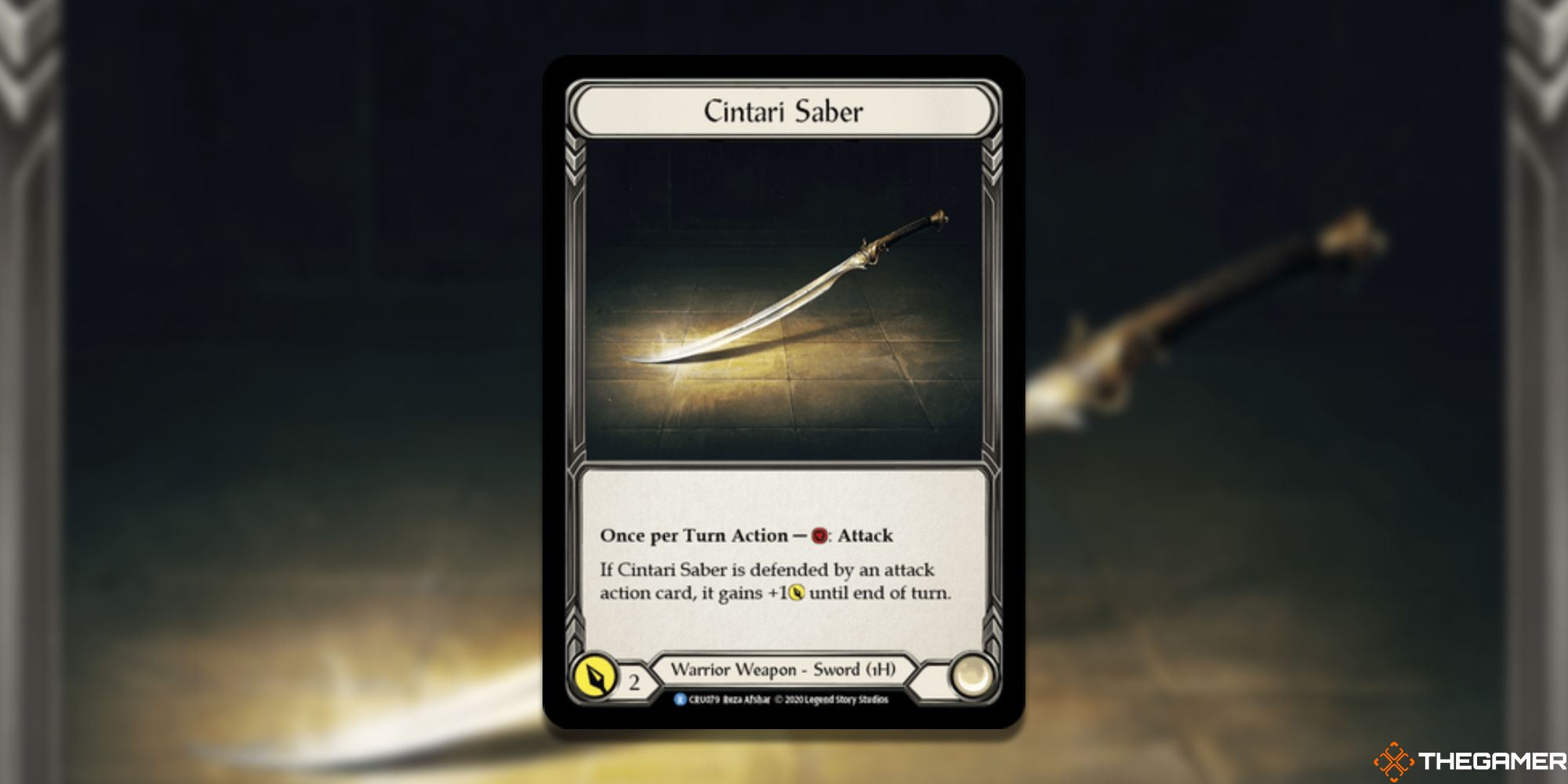 Another card that could be seen as a dark horse, Cintari Saber costs one action point to attack. If it is defended by an attack action card, it will gain an additional strength point until the end of the turn. With two in strength right out of the deck, the result is a three-strength weapon for a low cost.

If you can play a card that will allow for a second action alongside Cintari Saber, the strength bonus will be added again. That attack will then be four strength instead of three: a ratio of two strength for each action point spent. 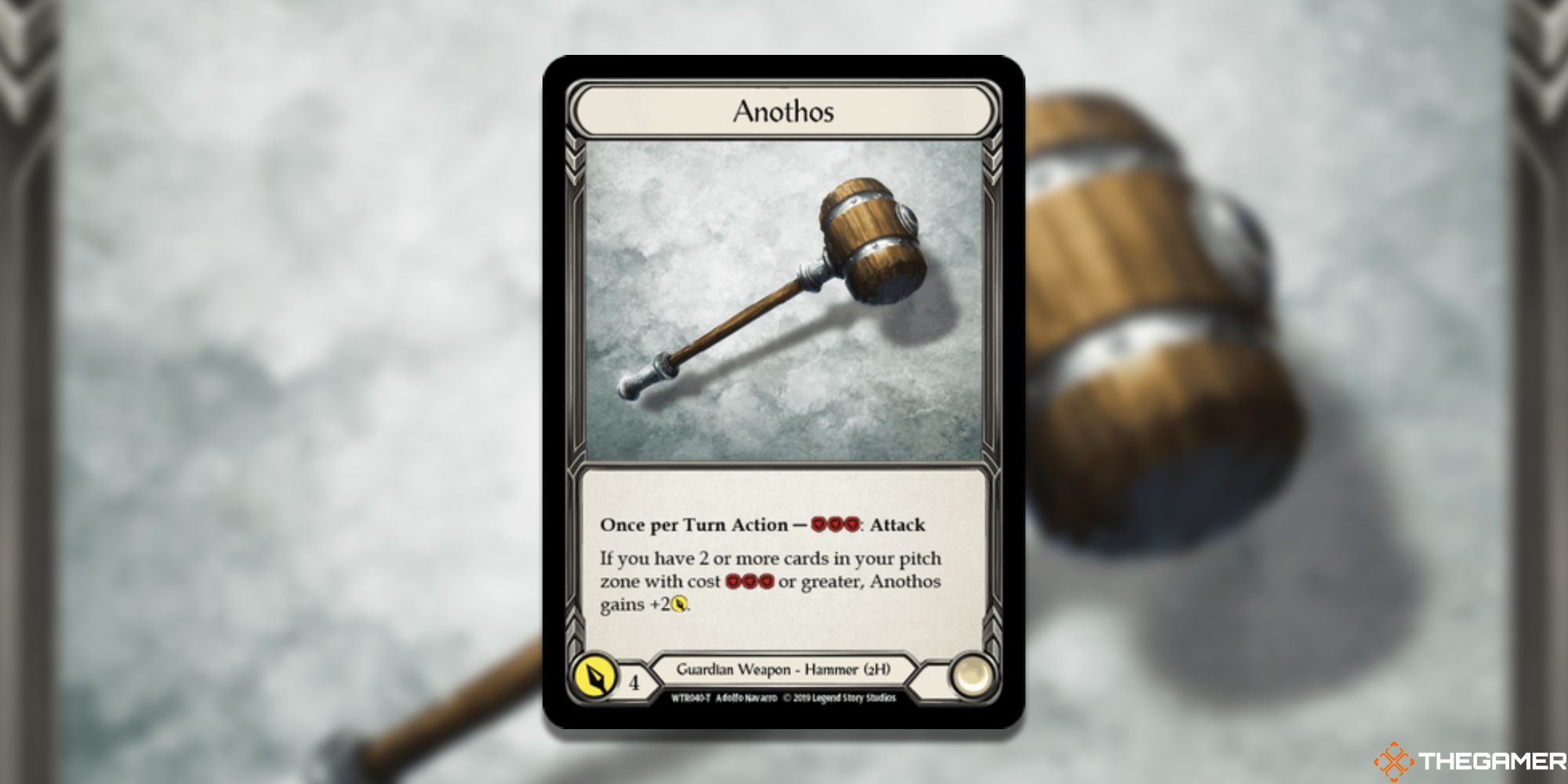 With a cost of three action points, Anothos is a pricey card. However, it’s a worthwhile expense with the four strength that it brings to each attack. Additionally, if there’s a card worth three or more action points in the pitch pile, it can bring damage to a devastating level.

Anothos gains two strength from this move, raising the already formidable hammer to six in strength. It is a two-handed weapon, so dual-wielding is not a possibility. But if the pitch pile criteria are met after the turn, it will still gain the plus two on strength for future usage. 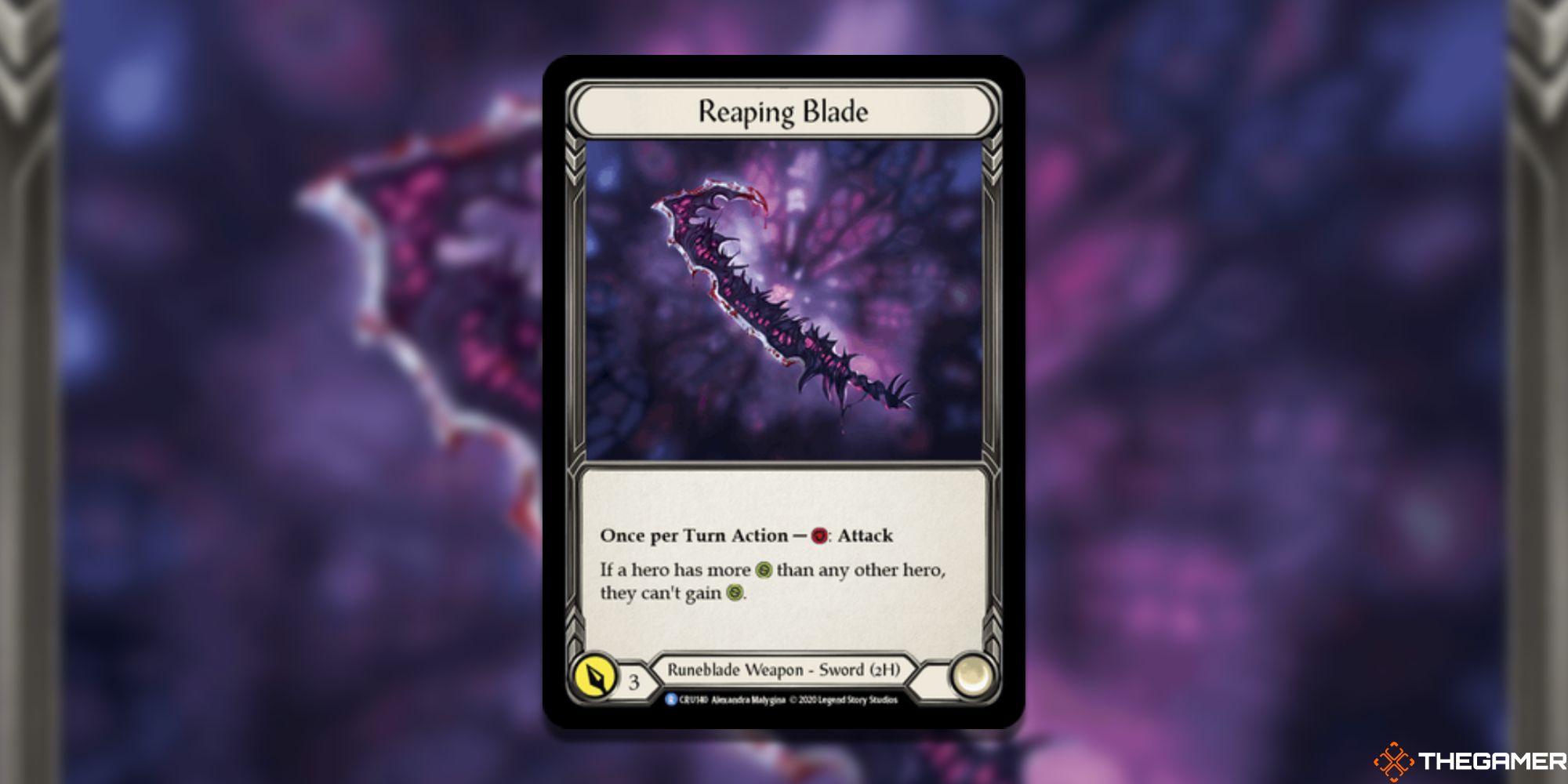 Reaping Blade has a strength of three and one cost for a single attack per turn. Strength is not its only skill – the card packs a tricky bonus effect that will leave your opponent fumbling as long as they have more starting life than you. 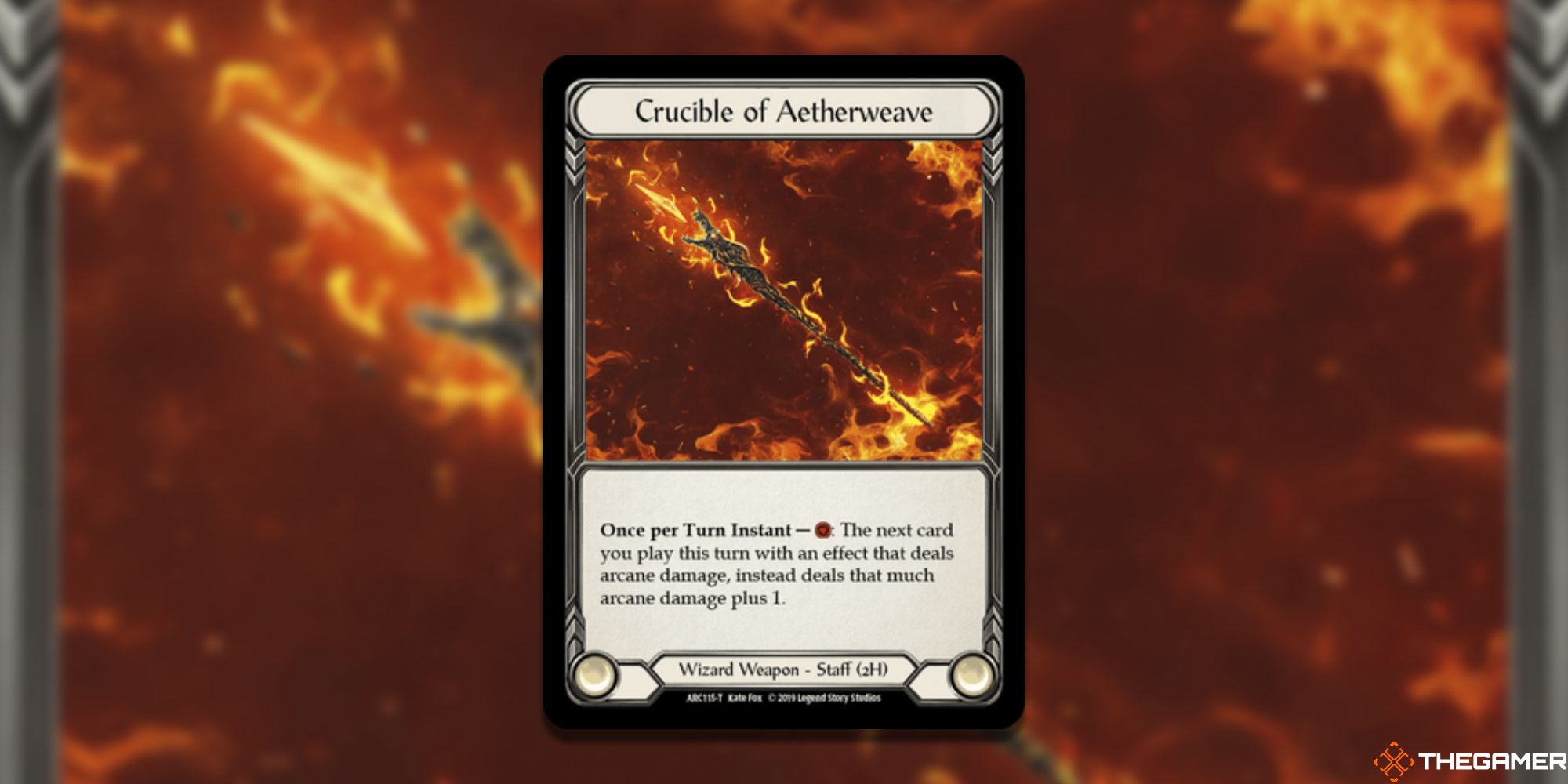 This weapon does not function as a weapon in the common sense of the word, as you cannot attack with Crucible of Aetherwave. Instead, this two-handed staff provides a boost for the next card played in that turn. An addition of one arcane damage might not seem like an impressive increase, but it can have surprisingly effective results.

Don’t forget to activate Crucible first before playing your arcane damage card, or else you’re going to miss out on the bonus effect. In addition, it will push through on-hit spells that can activate other skills. This card is a must-have for Wizard builds due to its efficiency. 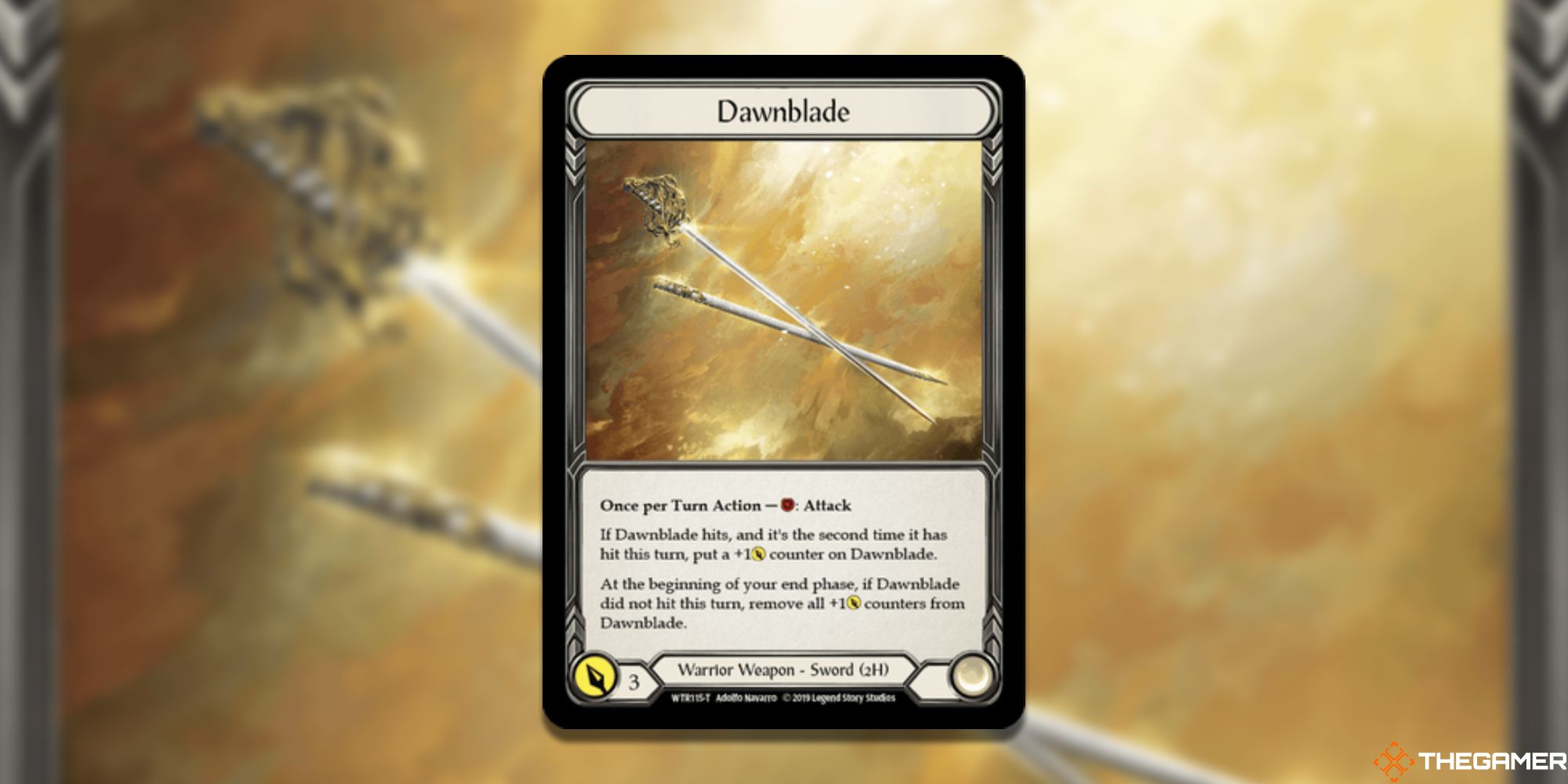 Dawnblade comes strong right out of the deck at a cost of one action point for an attack with three strength. If it hits a second time, a bonus one for strength is acquired. The plus one comes in the form of a counter that is permanently added. However, if the Dawnblade doesn't hit that turn, the counter must be removed at the beginning of the end phase.

The caveat to this powerful move is that Dawnblade cannot do more than one attack per turn on its own. You must play it with a card that will allow it a second attack. 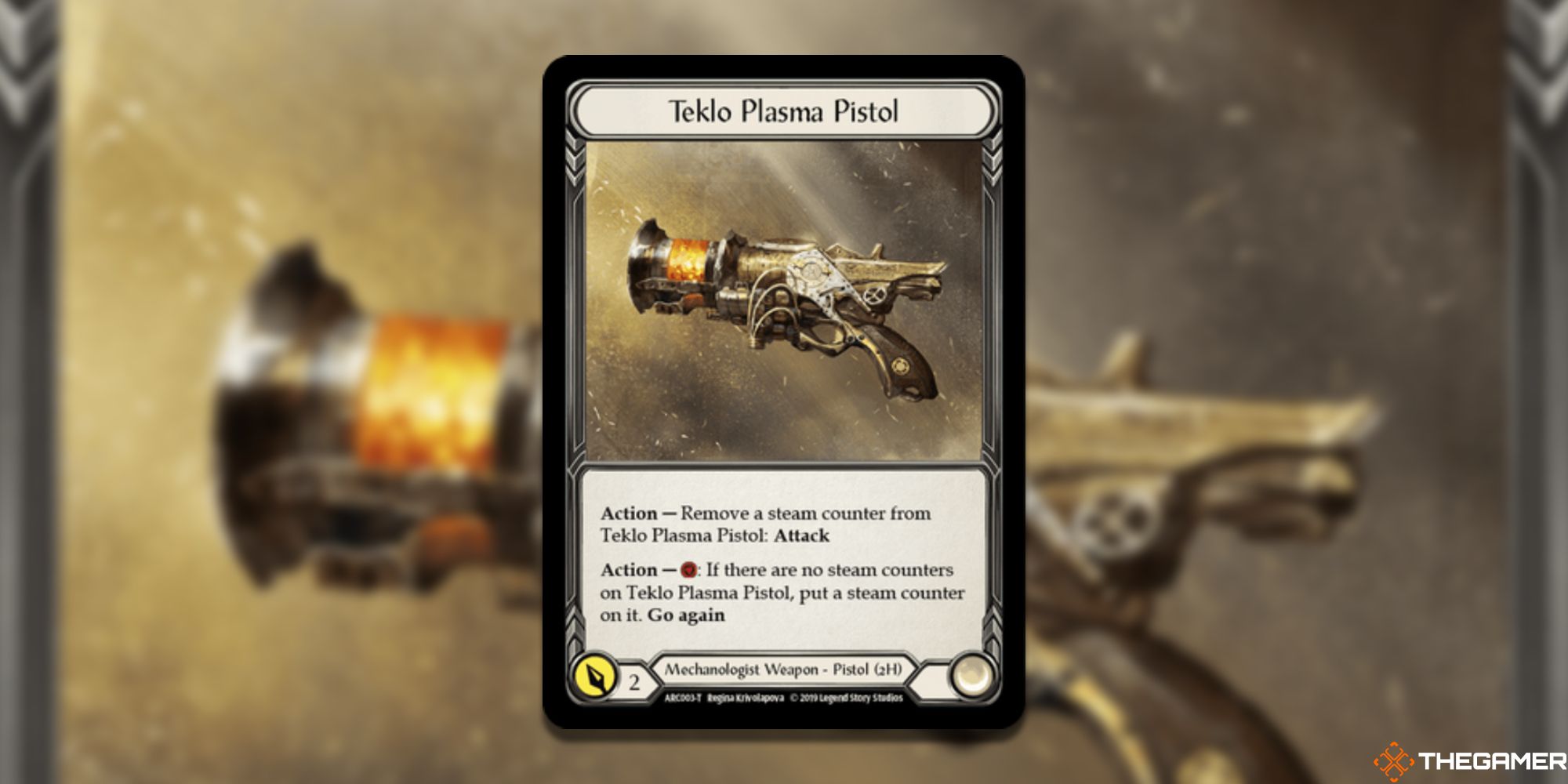 Teklo Plasma Pistol will allow you to move a steam counter for the action and attack with two strength. If there are no steam counters, however, you put one on and go again. They do not stack, but you do gain one action point at the resolution of the action.

What makes this card a great addition to your deck is its simplicity. Because its action is an attack, you can keep using the attack as long as you have the resource points to spend. It’s hard not to love a card that rewards you for good resource management.