Over the years, G Fuel has released some pretty strange flavours, ranging from everyon'es first weird flavour port of call, Bacon, all the way to something called "Hype Sauce" that we probably don't want to know the ingredients for. G Fuel has also collaborated with games on several occasions, releasing flavours like Wumpa Fruit for Crash Bandicoot 4: It's About Time, and a Chili Dog flavour based on Sanic memes.

Liquid chilli dogs be damned though, as G Fuel has just announced that it's making a flavour titled "Mighty Poo" that's based on the infamous Great Mighty Poo boss battle from Conker's Bad Fur Day. That's right, you can now buy an energy drink that's designed around and meant to taste reminiscent of shit. What a world we live in. 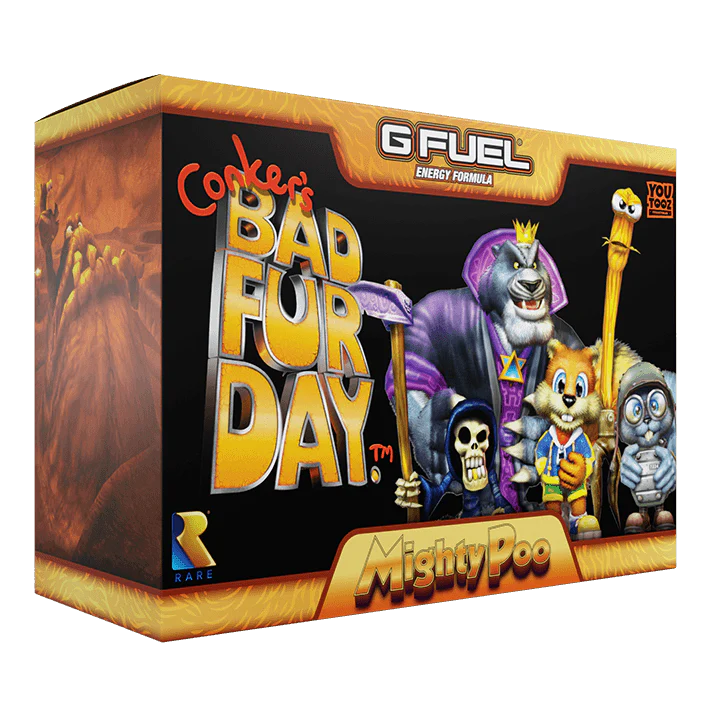 To be more specific, G-Fuel describes the flavour as "Tropical Corn Soda Mix", based on the corn that you chuck into the Mighty Poo's mouth at the start of the fight. The listing for the flavour also uses this disgusting bit of flavour text to really reel you in, "G FUEL’s flavor scientists ventured into the bowels of The Great Mighty Poo’s lair to pick out the finest morsels from his aromatic abode: CORN! As a matter of fact, we’re positively FLUSH with juicy corn niblets (don’t worry, we’ve cleaned them off)!"

If that description didn't put you off (and who are we kidding, you clicked on the article), the Mighty Poo flavour is currently up for pre-order on the G Fuel site and planned for a release April 2023. The only way to get the flavour at the moment is to buy it as part of a collector's box that'll run you back $59.99 and comes with a Youtooz Mighty Poo vinyl figure. If you're still thinking of buying a poo-themed flavour for that much money, then more power to you I suppose.