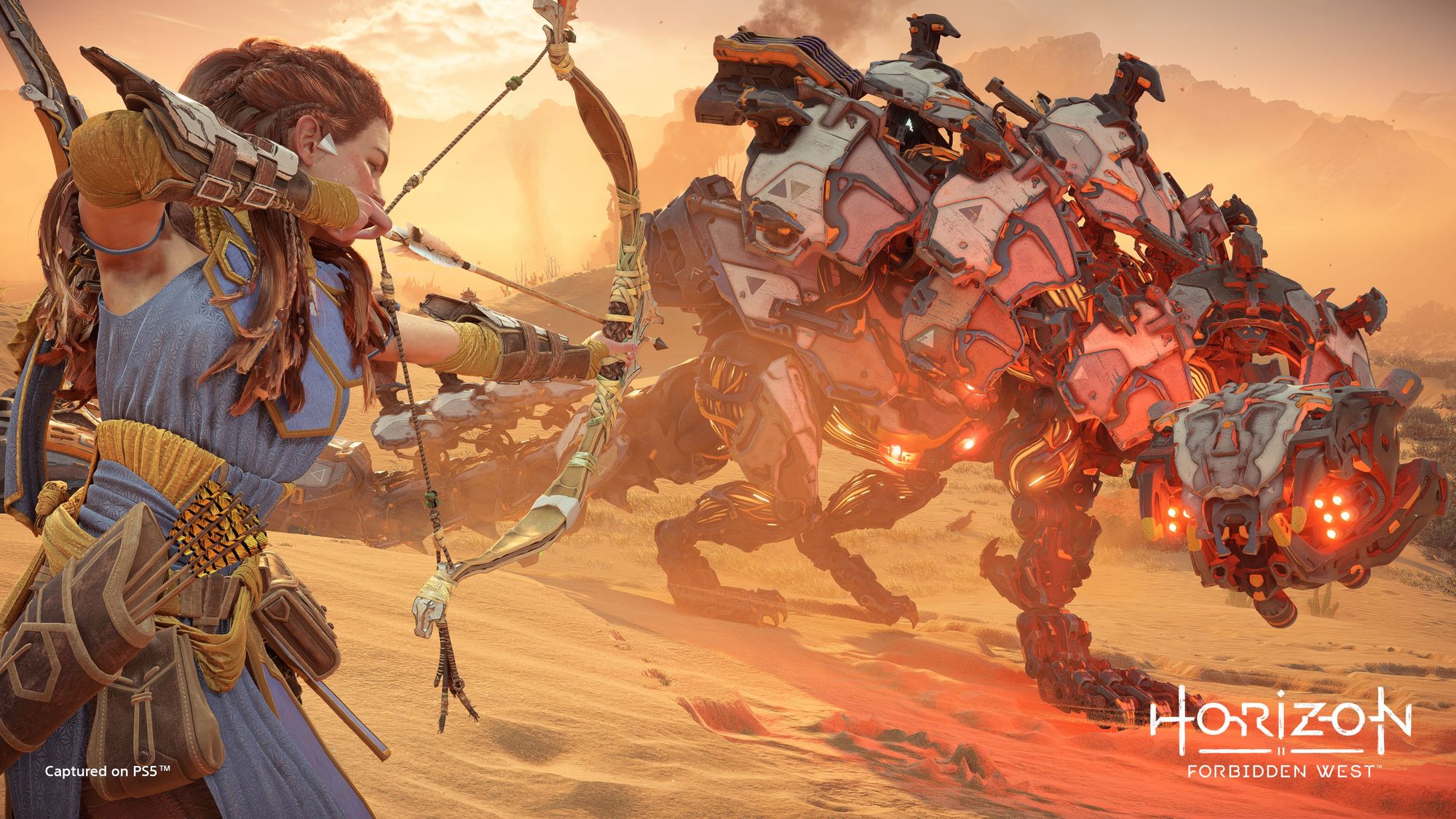 The Friday Inbox is impressed with this week’s State of Play from Sony, as one reader falls in love with Radiant Silvergun.

Unfortunate timing
It’s been interesting to see the discussion of Horizon Forbidden West recently and I have to agree that it’s really a shame that it came out at the same time as Elden Ring, just as the original came out at the same time as Zelda: Breath Of The Wild. I doubt it’ll affect sales much, but it does highlight the difference between a game that is good and one that is great. Not even great but destined to be regard as an all-time classic.

I think we can all agree that Horizon Forbidden West is not that, but I think it’s nonsense to pretend it’s bad or even average. It is a good game and I’ve kept playing it rather than start on Elden Ring. That’s in large part because Elden Ring is really long and I don’t want to have to go back to a half completed Forbidden West and try to remember what I was doing. But it’s not a chore, it’s a really entertaining game.

The most valid complaint against Forbidden West is that the story and characters are a bit dull, and this I will agree to. But they are only a ‘bit’ dull. They don’t add much to the game but I’ve put up with far worse, that actively takes away from it.

In short, we’re back to the usual internet problem that if something can’t claim to be the best thing ever it must be the worst. That’s stupid and so is the idea that Forbidden West is a bad game. Sony might want to try picking its release dates a bit more carefully though, because, really, that’s my biggest complaint with the series.
Danse

Superficial concerns
It confounds me when people moan about console aesthetics. Surely the functions of the console are more important? I’ve read and heard from people that consider the new consoles too big and I’m fed up of this kind of talk. I couldn’t give a flying fish about consoles being ‘ugly’ either, what I care about is reliability. The days of yellow and red lights of death are still very fresh in my memory.

To me, considering with what they have managed to fit in, they are pretty small. Well compared to my desktop PC anyway, and compared to smaller comparable PCs in size like the Intel Dragon Canyon NUCs you are getting a lot of bang for your buck.
Sheel

Missing out
I was lucky enough to receive an Oculus Quest 2 from my girlfriend for my birthday and wanted to get your, and readers’, advice on the best games to play which showcase the VR experience. I have an Xbox Series X and Switch so really interested in unique gameplay experiences.

On a second note, after years of staying away from the series, I picked up Dark Souls Remastered for the Xbox Series X and have to say it really is great. I’ve made slow progress and I have no idea if I’ll finish it but enjoying it thus far. I am playing offline as I believe others can invade you at any point and don’t need that! Am I missing out by being offline?
Drew5u75

GC: Yes, you’re missing out on helpful messages from other players and co-op help with bosses, which is well worth the risk of an occasional invasion. As for the Oculus Quest 2, try Beat Saber, Resident Evil 4, Star Wars: Vader Immortal, Population: One, Pistol Whip, Blade & Sorcery: Nomad, and The Walking Dead: Saints & Sinners.

Take a break
I’m currently around 14 in on Elden Ring and I think it’s more than worthy of all the hype and glowing reviews it’s been getting.

I’ve beaten the Tree Sentinel, Margit, The Fell Omen and a few optional bosses. So far, I’m not finding it overly difficult, I think it’s because of the open world structure.

I can just venture off, explore and level up at my own pace, it’s fantastic. It’s definitely the most accessible From game I’ve played. There’s lots of summons to help me out with tough enemies and spirits are great.

My only niggles are that graphically it’s not really any better than Dark Souls 3, tho’ the art design more than compensates for it, I would have liked it if it looked proper next gen.

At first I thought it was absurd how it was being compared to Zelda: Breath Of The Wild, but it’s the only game that comes close I think. I’m playing as a sorcerer/mage and I’m really, really enjoying it.

Superficial concerns
It confounds me when people moan about console aesthetics. Surely the functions of the console are more important? I’ve read and heard from people that consider the new consoles too big and I’m fed up of this kind of talk. I couldn’t give a flying fish about consoles being ‘ugly’ either, what I care about is reliability. The days of yellow and red lights of death are still very fresh in my memory.

To me, considering with what they have managed to fit in, they are pretty small. Well compared to my desktop PC anyway, and compared to smaller comparable PCs in size like the Intel Dragon Canyon NUCs you are getting a lot of bang for your buck.
Sheel

Retro horror
So it’s been apparent that PlayStation will be rolling out a tier-based alternative to Game Pass. PlayStation Spartacus will be arriving soon and it will feature classic games, that we will be glad to see. Since the modern gaming age is disappointing, to say the least, I’m hoping that Project Zero, which is still an amazing horror game and such an example that horror isn’t what it used to be, is added to the roster.

I’ve never had the pleasure of playing any of the instalments, since it’s never actually been added to the modern Xbox library or even PlayStation. So it deserves to be played and enjoyed by those who probably are alien to the terror of these games. The sequel is fantastic as well and it reminds me of when we weren’t bombarded with countless jump scares. I’d also love to see the Silent Hill trilogy and Resident Evil trilogy as well. Because old is truly gold.
Shahzaib Sadiq

GC: Modern gaming is what now?

Treasured favourites
Can’t believe it’s taken me this long to play Radiant Silvergun. This is an incredibly well-made game, its weapon system must’ve felt so bold and ingenious in 1998 because it still feels really creative and different in the modern context of the shmup.

Treasure never disappoint in the boss department and Radiant Silvergun has among their most ambitious, inventive and extremely assured boss design performance indeed. The 3D aesthetics of these big baddies are wonderful as well, especially for a Saturn game.

The game’s soundtrack is also easily one of the best I’ve heard in gaming, let alone in a shmup, it’s so grand and a perfect fit for the explosive action. Radiant Silvergun is just the full package, very demanding though, but I’m making incremental progress and starting to become quite proficient with the exemplary weapon system. Quick update: I’ve just beaten the game on the ‘easy’ difficulty. Do I win a tenner?

Honestly, as of right now Radiant Silvergun is easily a top contender for the greatest shmup I’ve ever played. Every bit the equal to treasured favourites of mine, Ikaruga and Gradius 5. Treasure Games really made the Saturn’s bells ring thunderously with this magnificent video game. Nicalis/Treasure/Buddha need to make this masterclass in shumps available on a Nintendo and Sony device expeditiously!
Galvanized Gamer

With £12 credit left in my PlayStation digital wallet I have bought The Pedestrian and Lair Of The Clockwork God. If you are unaware of the last game I mentioned it has received quite good reviews and it is a cross between a platformer and a point ‘n’ click game with humour. When they released it physically recently on Limited Run games they included a manual with the game, but the manual didn’t tell you anything about how to play the game! It’s in the style of the humour of the game!
Andrew J.

State of yay!
I thoroughly enjoyed this week’s State of Play from Sony. While I probably won’t play a lot of the games announced, as they don’t seem like my type of games, I thought the tone and variety of games on show was really refreshing. It felt like you had no idea what was going to be announced next, whereas previous presentations from Sony, Microsoft, and Nintendo have sometimes felt like you’ve seen each game before, even when they’re new reveals.

The most welcome surprise had to be Exoprimal – mech suits fighting dinosaurs that fall from vortexes in the sky! While the kaiju fighting game, GigaBash, reminded me of a similar Godzilla game I had on GameCube back in the day, so that got some nostalgia going.

I thought Forspoken looked great, graphically, but there’s something about it that isn’t convincing me at the moment. It’s reminding me of inFamous: Second Son, which was a real visual showcase but didn’t push boundaries with its gameplay. Having said that, I enjoyed inFamous so I’m not writing off Forspoken by any means. I’ll still be following the previews and reviews with interest.

Valkyrie Elysium will be one to watch for me. I really like the art style and the combat looked engaging, so I’m intrigued to read and see more on that.

I’m currently playing, and liking, Ghost Of Tsushima on PlayStation 5 so Trek To Yomi will be another one I’ll keep an eye on. Samurai games seem to be like buses these days!

Looking forward to the next State of Play and seeing whether PlayStation Pass becomes a reality.
Hubert

Inbox also-rans
It sounds like Allan hasn’t got Gran Turismo 7 connected to the internet.
Al

This may be a silly question but is Gran Turismo 7 25th Anniversary a PlayStation 5 exclusive? I was hoping to get it for PlayStation 4. Many Thanks.
Anon

GC: The game is on PlayStation 4, yes. We don’t know about any 25th Anniversary Edition, but we doubt that’s exclusive either.

This week’s Hot Topic
The subject for this weekend’s Inbox was suggested by reader Scooter, who asks what is your favourite video game universe?

Many video game franchises have been going for decades now and have crafted their own unique worlds and backstories but which do you most enjoy coming back to? It doesn’t have to be a game with any sequels, but which fictional world, or worlds, do you have the most fun in?

How much does the backstory and lore matter to you and what else would you like to see done in the same universe, in terms of new games and spin-offs?