Ningguang is one of the characters who have a Hangout Event available in Genshin Impact. Her unique story, The Jade Chamber's Returning Guest, presents several plots with unique endings. If you're a true Ningguang stan, you can even put the Hangout Memories from each ending on display in your Serenitea Pot!

There are plenty of decisions to be made as you help Ningguang run the Jade Chamber. With our guide, you'll be able to know what's important and what isn't, unlocking all five endings and earning the Megrez's Companion Star achievement while you're at it!

How To Unlock Ningguang's Hangout Event 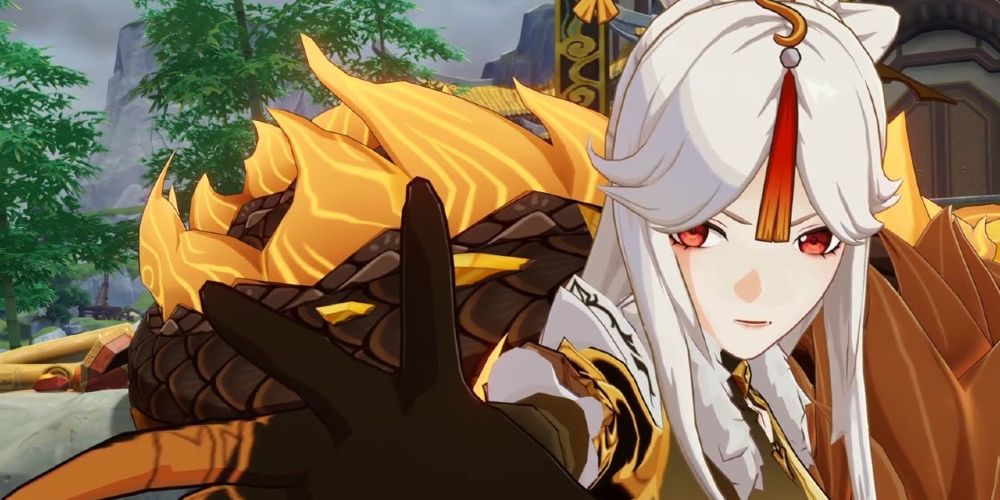 On the Story Quests screen, all Hangout Events are kept under a tab set aside just for them. Each Hangout must be unlocked separately. The Jade Chamber's Returning Guest requires that the player be at least Adventure Rank 28 and have completed the Act I Interlude 'The Crane Returns On The Wind'.

Additionally, unlocking the Hangout requires a payment of two Story Keys. You can earn Story Keys by completing daily Commissions. Once you've completed eight Commissions you can claim a new Story Key, and you can hold up to three at a time. 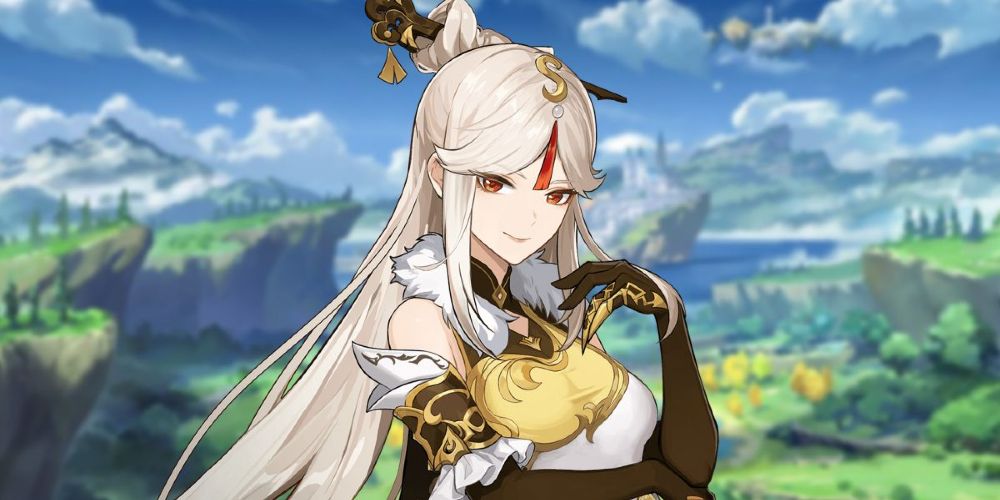 The Jade Chamber's Returning Guest has five unlockable endings. If you just want to know the steps for unlocking each one without spoilers, follow the instructions below. For a deeper dive into each possible story arc, there are sections for all of them presented further down.

While The View Remains Good

The Weight of a Collection

The Jade Chamber Once More 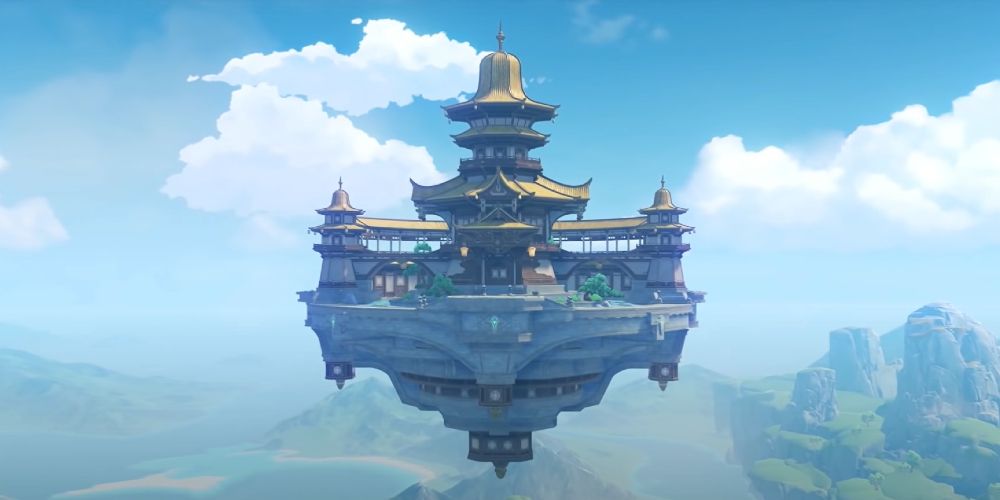 Once you've started the Hangout Event from the Story Quests menu, head to the Jade Chamber and talk to Ningguang. She asks you to cover some administrative duties while her staff is preparing for an important auction. As Baishi reveals, you'll also be taking care of Ningguang's day-to-day needs. Once you've received your briefing, speak with Baishi to plan the day's schedule.

She will explain the many complexities of running the Jade Chamber and impress upon you the importance of maintaining Ningguang's perfect image. Most of your dialogue options won't have any effect on the story, but after Baishi turns the job over to you, it will be time to make an important decision.

Ningguang: If anything else is unclear, you can ask Baishi.

If you attempt to follow Baishi's instructions to the letter, you'll create a Rigorous Schedule. Pay attention to the times for each agenda item, as they can change with each playthrough of the Hangout Event. Baishi praises your hard work, and the scenario proceeds to Business As Usual.

If you decide to keep things simple, you clear Ningguang's calendar and convince Baishi to let her have a day off. Setting up a mini-vacation for Ningguang causes the Hangout to continue with Time Off. 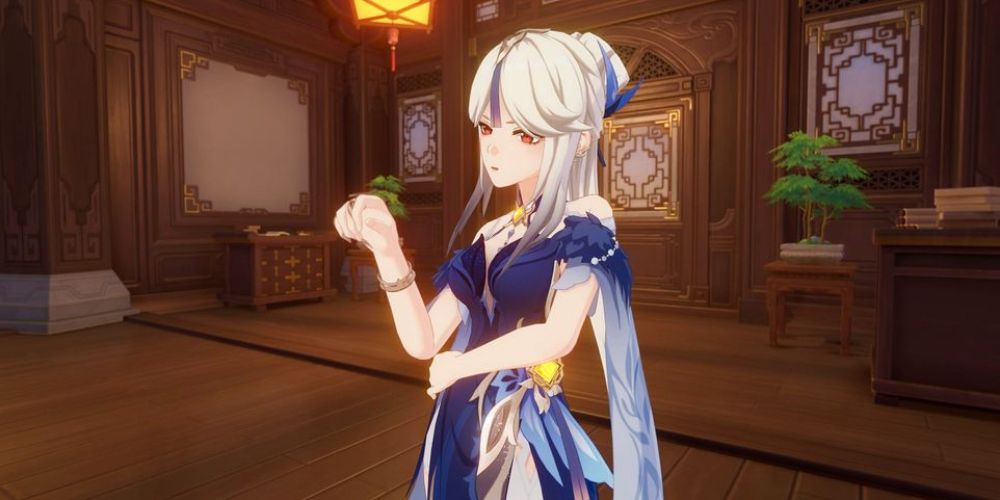 After creating the Rigorous Schedule, you'll have a break until the next morning. Wake Ningguang up by knocking on her door between 7:00 and 8:00. She will invite you to breakfast and afterward ask you to retrieve her outfit for the day from Lanyang. Return to Ningguang with the Box of Clothes. After she changes, proceed to Liuli Pavilion.

At the Pavilion, speak with Luo Qiao to begin Ningguang's first meeting of the day. Ningguang and Luo Qiao chitchat and talk business for a while, then Ningguang wonders how her staff is doing setting up the auction. Your response will determine the next phase of the Hangout Event.

Ningguang: I'm a little concerned about the auction. I wonder how my secreterial trio is getting along?

Response: Don't worry about them. They're very capable.

Response: Well, we have time to go and check up on them if you want.

If you decide to check in on the auction, Ningguang asks you to bring her to Yujing Terrace where the Auction Games storyline unfolds. 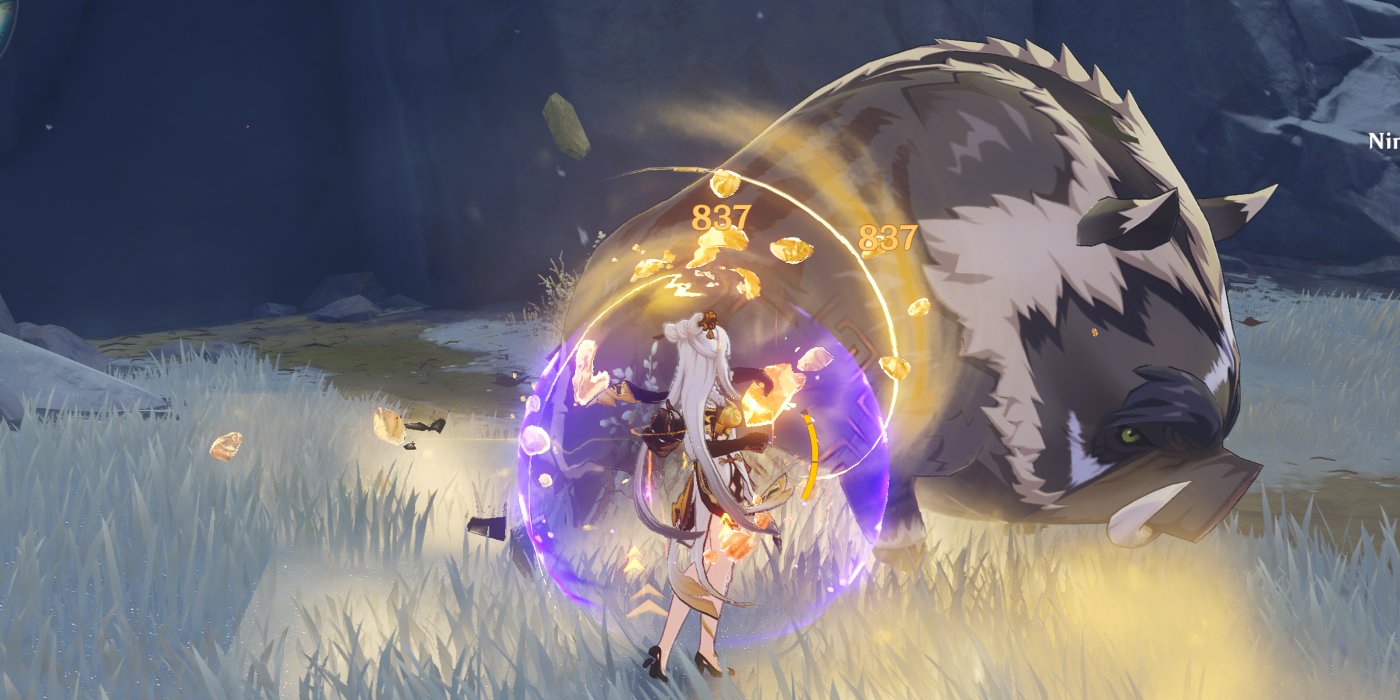 After setting up a Simple Schedule for Ningguang, wait until the following day and wake her up between 7:00 and 8:00 – sleeping in isn't part of the vacation. After a brief dialogue, Ningguang asks for your input on what she should do with her free time. Your response will determine how the rest of the Hangout Event resolves.

Ningguang: So then. The day's ahead of us. Any ideas on how to spend it?

Response: Let's do something you never normally have time for.

Choosing this option causes Ningguang to talk about the chess variant she invented called Liyue Millennial. She mentions that she wants to create a limited-edition chess set featuring a piece in the Traveler's likeness, and brings you to have the measurements done.

Follow Ningguang to get measurements taken by Ying'er, then go to Mingxing Jewelry to order the custom chess set. After both errands are complete, head back to the Jade Chamber and talk to Ningguang one last time, where she shares some of her personal doubts. This completes the Hangout, earning the Unchanging Will ending.

Response: Let's do something you never normally have the opportunity to do.

With this selection, Ningguang expresses a desire to go back to her roots as a poor fisherman's daughter. She wants to earn an honest day's pay without the help of her existing wealth or influence. She will give you two choices for how to make some Mora; if you decide to start at the bottom of the ladder, she brings you to the docks to scrounge for abandoned goods to flip.

This begins the Starting From Zero segment of the Hangout. If you suggest getting a job at Northland Bank, Ningguang cautions you that there is some bad blood between them and her but goes along with the idea. This brings the Hangout to its Endless Smoke segment. 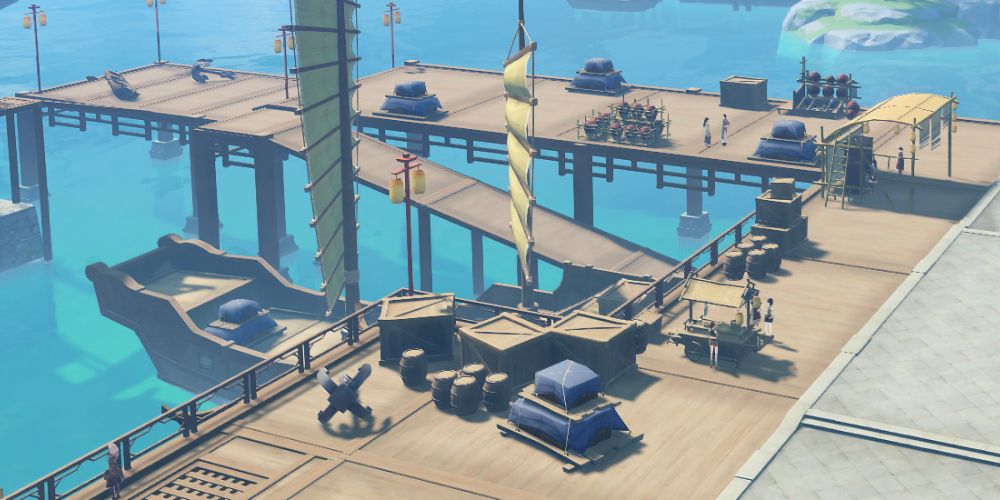 After the luncheon with Luo Qiao, the next item on Ningguang's agenda for the day is to meet three informants and exchange information. First, she asks to stop by Mingxing Jewelry to pick up an item she had repaired for one of the three contacts. After retrieving the comb from Xingxi, you'll meet Ningguang's informants – a trio of children named Zhizhi, Nannan, and Little Long.

It turns out that a pair of speculators, Big Xu and Lao Ke, have been feeding the children false information to try and get Ningguang to invest heavily in Luminescent Spines, driving the price up. Upon learning this, travel to the south wharf to confront the two.

After Ningguang puts Lao Ke and Big Xu in their place, she drags them back to the children to make them apologize. Relieved that they aren't going to get into trouble, the kids run off to play hide-and-seek at the north wharf. Join them there to finish the Hangout and unlock the ending 'While the View Remains Good'. 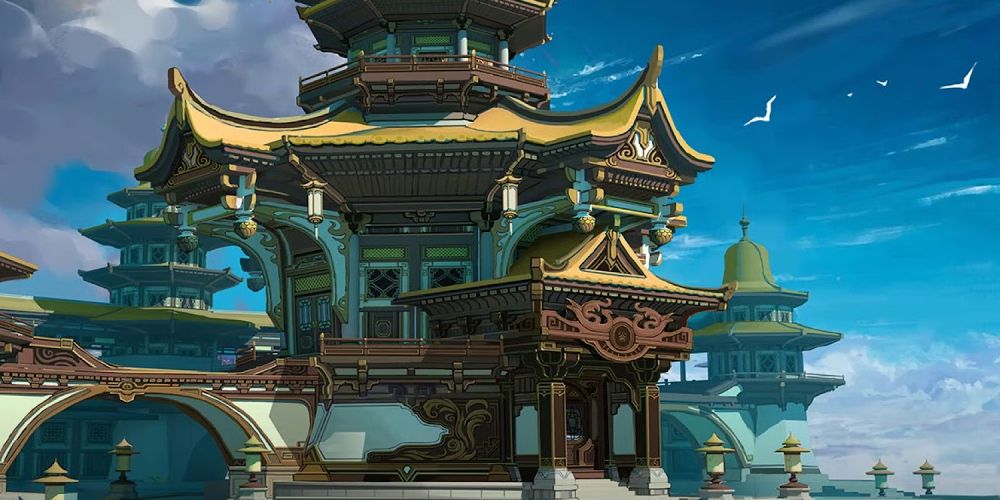 If you decide to check in on the auction, travel to Yujing Terrace and speak to the secretaries. Ningguang offers to let you participate, inviting you to walk the floor and examine the available goods. Inspect the Vase, the Writing Tools, and the Hairpin. The Traveler won't seem thrilled by any of the items. Speak to Ningguang again between 16:00 and 18:00 to begin the auction.

Even if you bid competitively, the other participants will walk away with the items since the Traveler will refuse to pay such exorbitant prices. Afterward, Ningguang suggests that you speak to the buyers to see why everything went for so much Mora.

Talk to Xiaofei, Yingfeng, and Little Bin to find out that Ningguang's fans will pay just about any price for something she previously owned. That's not the whole story, though. Speak to Ningguang one last time and she will be confronted by Yingfeng, who accuses her of selling fake items.

Ningguang reveals that the items are indeed replicas, but replicas of items that were lost from her collection and are now in the hands of the auction's buyers. Since only the buyers who already own the genuine articles would know that the auctioned items were duplicates, Ningguang offers to refund Yingfeng's payment if her property is returned to her. After this converation, the Hangout Event concludes with the ending 'The Weight of a Collection'. 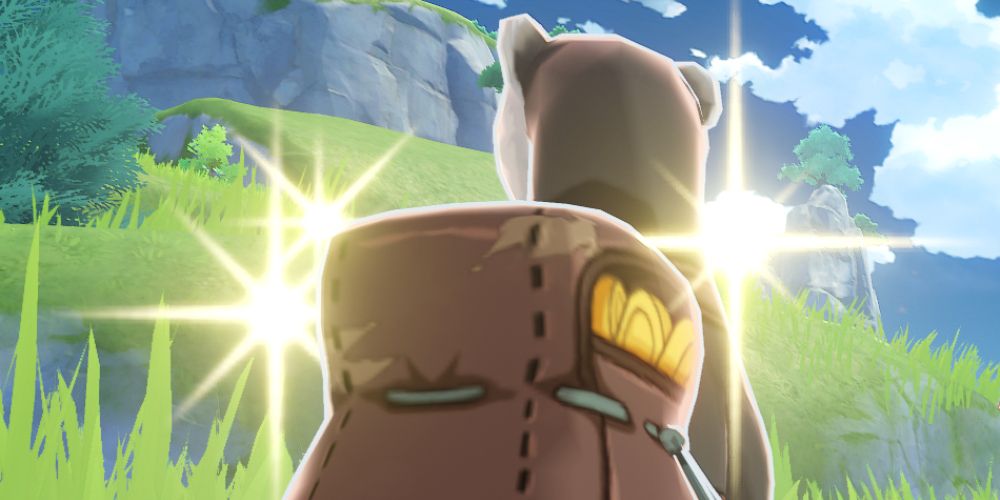 If you decide to work with Ningguang to make some Mora from scratch, visit the wharf and speak with the warehouse manager Gou San'er. He will show you the clearance items, but there isn't much of value. Ningguang takes the lot to sell to the merchant Bolai at Wanyou Boutique.

As it turns out, Ningguang can't engage in business without the benefit of her status; Bolai offers her an absurd amount of Mora for the junk in an effort to curry favor. Seeing that Ningguang is discouraged, the Traveler suggests she try the adventurer lifestyle for a day.

You'll travel to Guili Plains, where you'll search for treasure alongside Ningguang. Fight the slimes that appear and look around for treasure chests. As you search, you'll have a second combat encounter, this time against some hillichurls. After this fight, Ningguang notices a Weasel Thief mound. Investigate the nearby mounds and catch the Weasel Thief to get the Mora it's carrying.

Afterward, Ningguang invites you down to the river where she demonstrates the art of catching fish by hand. All you have to do is wade into the water and pick up fish as though they were items. Catching more than you need to earns the achievement 'You've Got To Have Reserves'.

After you've caught enough fish, return to Ningguang on the shore. The two of you share some grilled fish, and Ningguang reminisces about the time before she was rich. The Hangout Event ends here with the 'Fortunes Shared' ending. 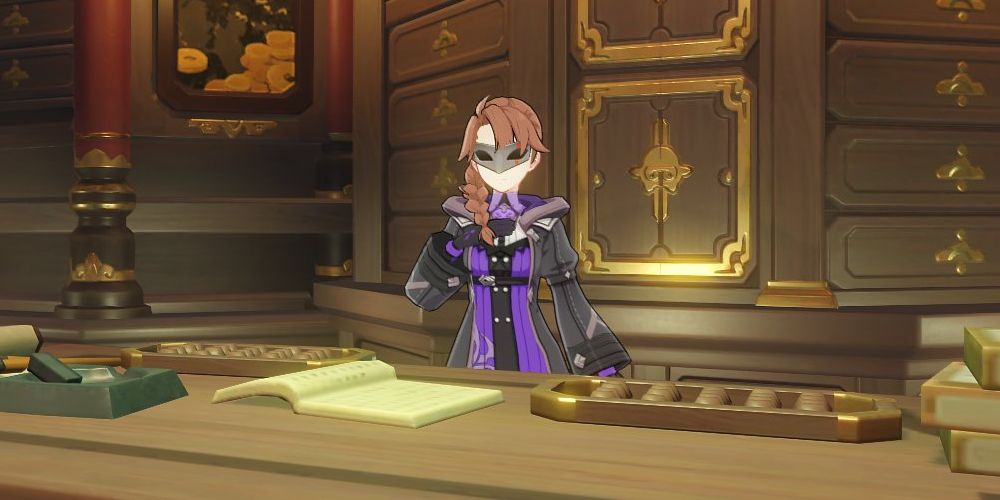 If you suggest trying to find work at Northland Bank, Ningguang receives a cold reception. Upon arrival, she is confronted by Ekaterina who makes it clear she doesn't want Ningguang anywhere near her business.

Head back outside and talk to Ningguang, who reveals that when she imposed financial sanctions against Snezhnaya, it was Northland Bank that covered the bill resulting in a catastrophic loss. Both characters get a feeling that they are being watched, so Ningguang suggests leaving the area as casually as possible.

When Ningguang starts walking, follow her movements and check in with her every so often. Several Suspsicious Persons will appear as you walk together – observe their movements to figure out which one is tailing you. After you've spoken to Ningguang a few times, she'll ask you to confront the correct Suspicious Person.

If you catch them, they will reveal that Ekaterina is suspicious after Ningguang's visit and ordered her watched. Return to the Northland Bank, where Ningguang promises to throw the book at Ekaterina when it comes time to uncover her shady dealings. This concludes the Hangout Event, unlocking the 'Feint and Riposte' ending. You'll also earn the 'Overprotectiveness' achievement. 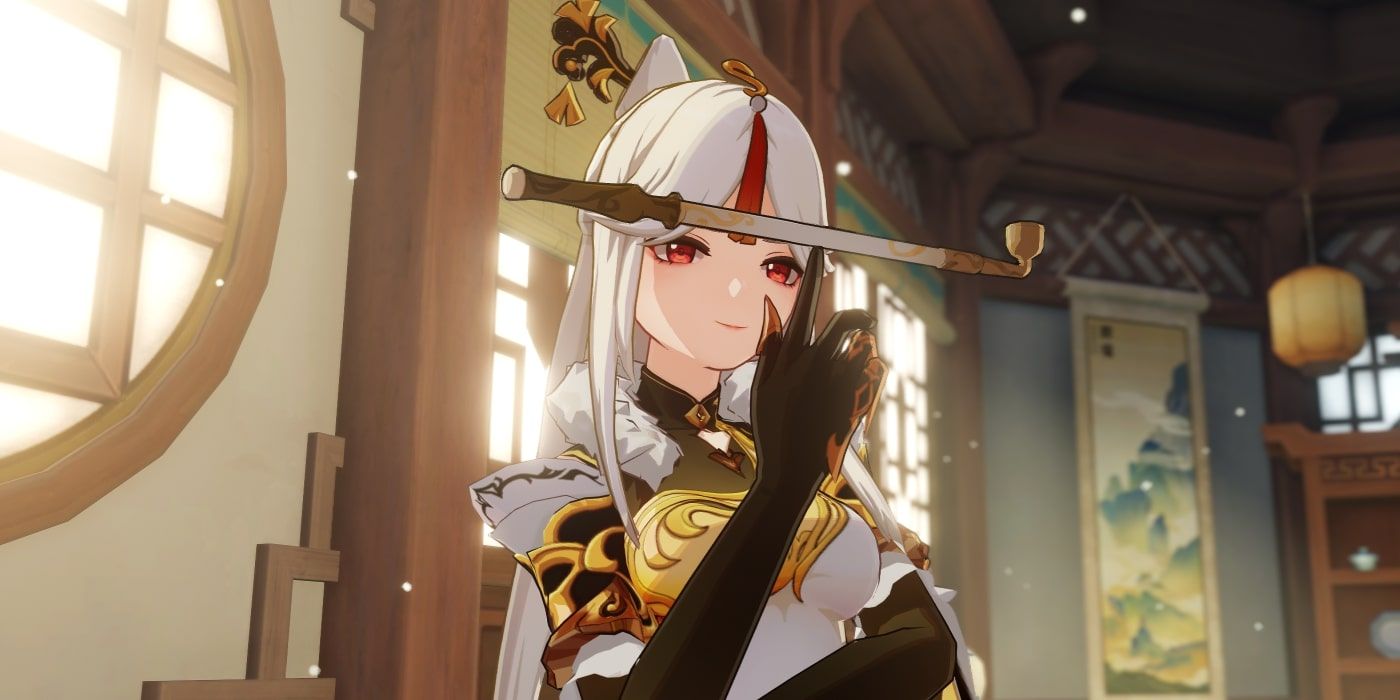 In addition to a Hangout Memory, you will receive a set of rewards each time you view a new ending to The Jade Chamber's Returning Guest. The rewards are based on the total number of endings unlocked, so seeing all five will score you some extra loot in addition to the achievement.