Despite being a relatively recent release, Raiden Shogun has built up quite an impressive reputation for herself within Genshin Impact. Not only is she the star of Inazuma’s Archon Quests, but she now lays claim to two Story Quests of her own as well. This is without even mentioning the fact that she’s arguably the game’s most popular playable character.

Raiden Shogun’s story teaches us that eternity has myriad interpretations and countless forms, but it’s perhaps Raiden Shogun’s newest form that will interest players the most. Indeed, Raiden Shogun now manifests in her own Weekly Boss fight that is the game’s most challenging yet. Defeating her won’t be easy, but this guide to will teach you everything you need to know to power down the Electro Archon. 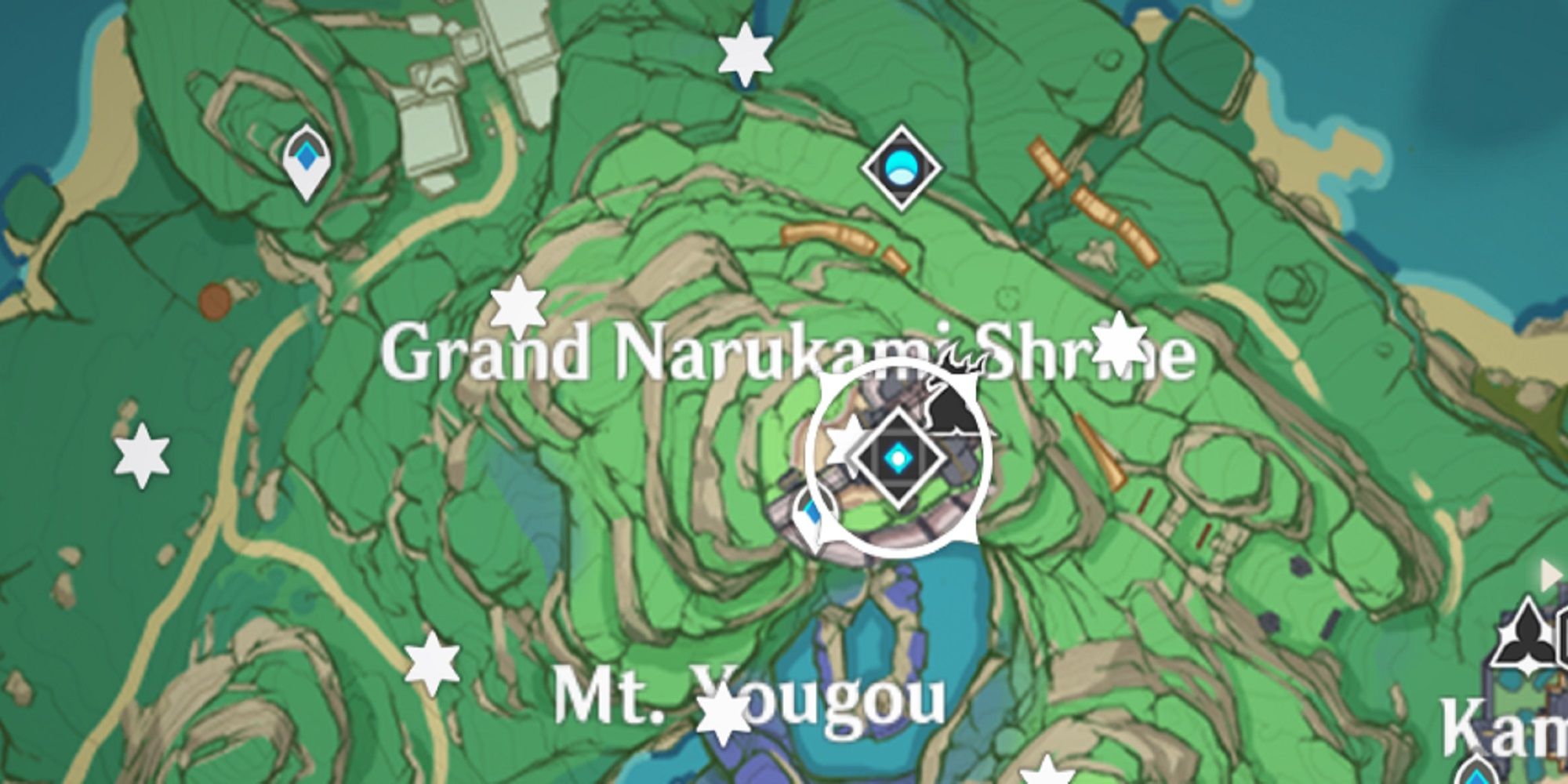 This boss is referred to in-game as “Magatsu Mitake Narukami no Mikoto.” Even though the actual identity of the boss is complicated, this guide will refer to her as “Raiden Shogun” for clarity and brevity’s sake.

To gain access to this Weekly Boss, players must complete Raiden Shogun’s second Story Quest: “Imperatrix Umbrosa Chapter: Act II – Transient Dreams.” You’ll actually fight Raiden Shogun for the first time at the end of the Story Quest, but the fight is modified and cannot be lost in this context.

Successfully finishing the quest will open up a new Trounce Domain called “End of Oneiric Euthymia” under Grand Narukami Shrine where you can square off against the boss for real. Spending Resin will grant you rewards for completing the fight once per week, including the new talent level-up materials: Mudra of the Malefic General, Tears of the Calamitous God, and The Meaning of Aeons.

Yae Miko currently uses the last of these materials, and future characters will likely require the others. 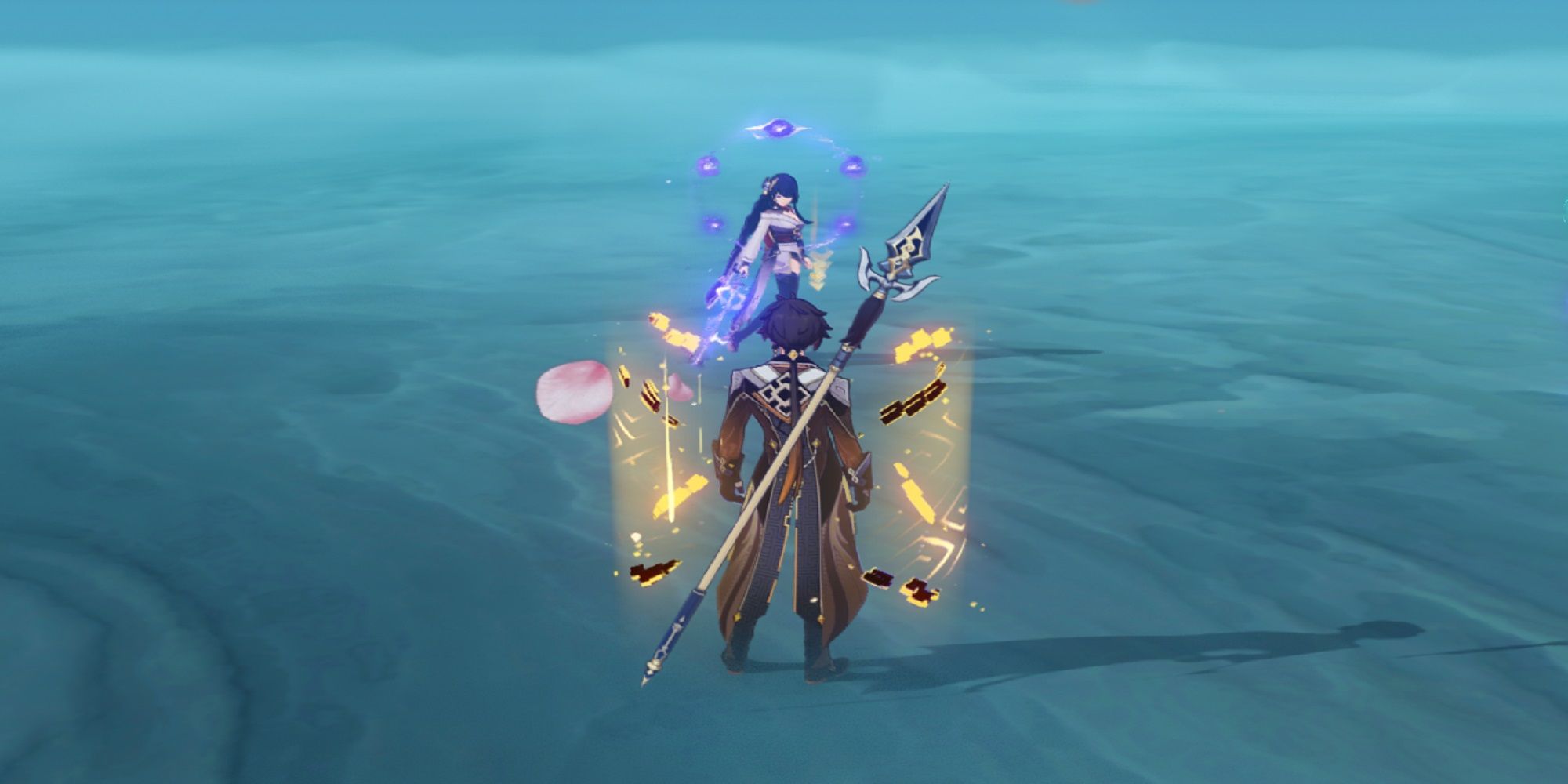 Often considered the strongest of the Archons, Raiden Shogun certainly puts her full power on display in this encounter. It will demand your best teams and your sharpest mechanics lest you want to be consumed by eternity.

Raiden Shogun will begin the fight in one of two stances: Musou Isshin Stance or Engulfing Lightning Stance. She attacks with a sword in the former and a polearm in the latter, with each weapon possessing a unique set of attacks.

Aside from the constant assault of melee and ranged attacks, there are a few key techniques to look out for during her Musou Isshin Stance. The first is when Raiden Shogun splits herself into four illusions that launch lightning blades towards you. You’ll need to damage the real Raiden Shogun to end this attack; identify her by finding the illusion that shoots an X-shaped slash at you. 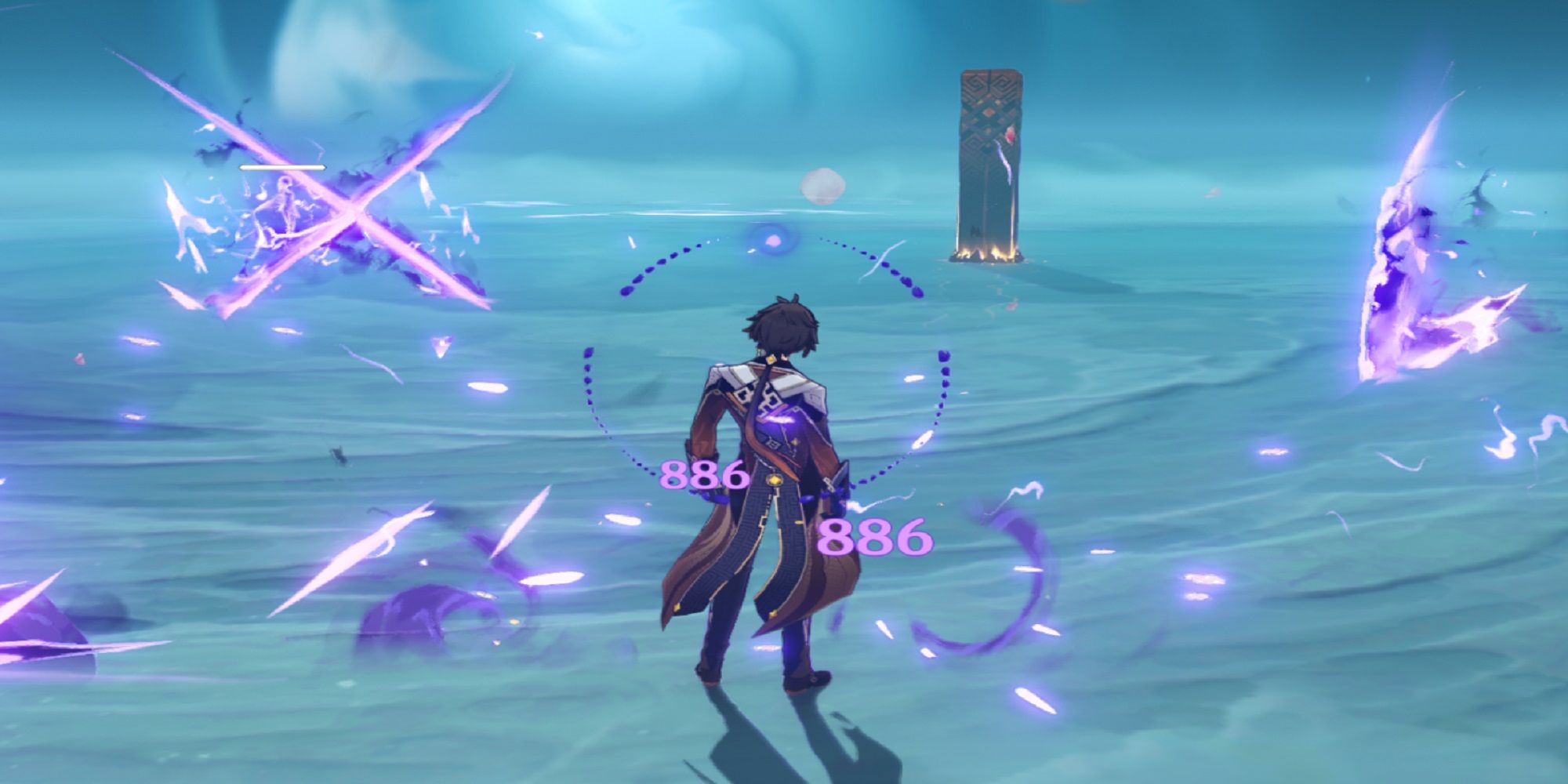 The Musou Isshin Stance also features an attack where Raiden Shogun will point her sword to the sky and begin charging up. This action precedes a storm of AoE lightning strikes and a deadly barrage of slashes surrounding Raiden Shogun. Run to the outskirts of the arena to best avoid this attack.

During her Engulfing Lightning Stance, Raiden Shogun will again unleash constant flurries of melee slashes and ranged attacks. Unique to this Stance is an attack in which she summons up to three Magatsu Electroculi around the arena. Any nearby Magatsu Electroculi must be destroyed with rapid hits to prevent it from exploding in a large burst of Electro DMG.

Raiden Shogun will switch between the two Stances after certain attacks. In both Stances, though, she will occasionally shield herself upon taking melee damage. Continuing to hit her in this state will eventually break her shield, but watch out for her counterattack when this happens. Regardless of her Stance, Raiden Shogun will also slowly accumulate Ominous Destiny, indicated by a meter under her health bar. This meter will fill faster when she hits you with attacks, and she will enter the Baleful Shadowlord form when it’s entirely filled up. 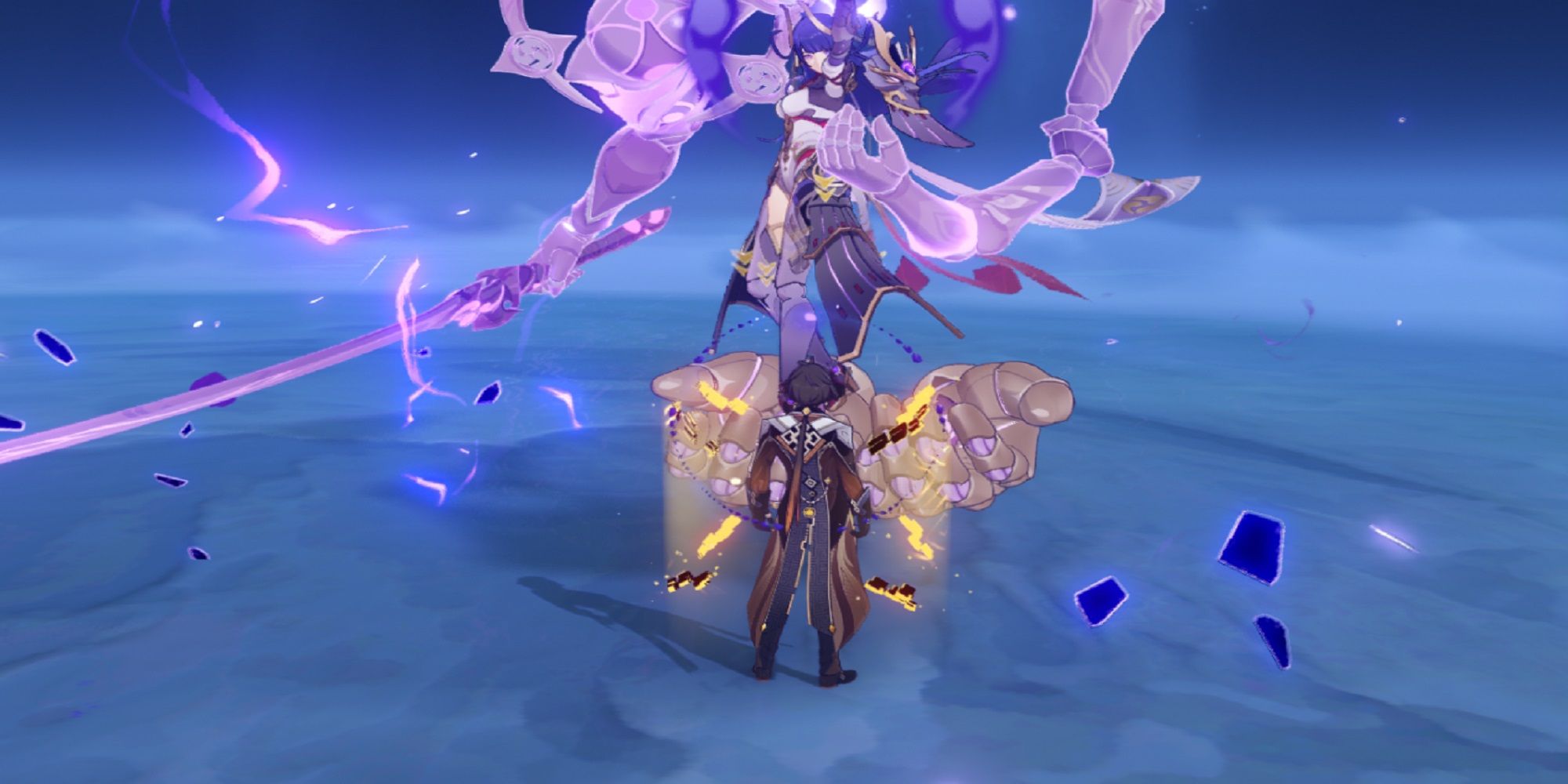 Raiden Shogun’s Baleful Shadowlord form is not nearly as subtle as her previous Stance switches. She assumes a truly deific appearance and powers up in every aspect. While she maintains her Baleful Shadowlord form, Raiden Shogun has massively increased RES to every DMG type, an Electro shield, stronger attacks, and will also drain the Energy of your active character.

This form features a similar array of basic attacks (except this time they hurt a lot more) along with several unique ones. If you see a sparking shadow zooming towards you, get ready for a giant fist that will soon punch out of the ground at your location. If Raiden Shogun plants three electrified javelins in the ground, get ready for a high-stakes game of jump rope since you must avoid successive waves of Electro DMG. Generally try to stay close to Raiden Shogun in this form as well, since she has a dash-attack that can close in on you anyway and cannot be dodged. 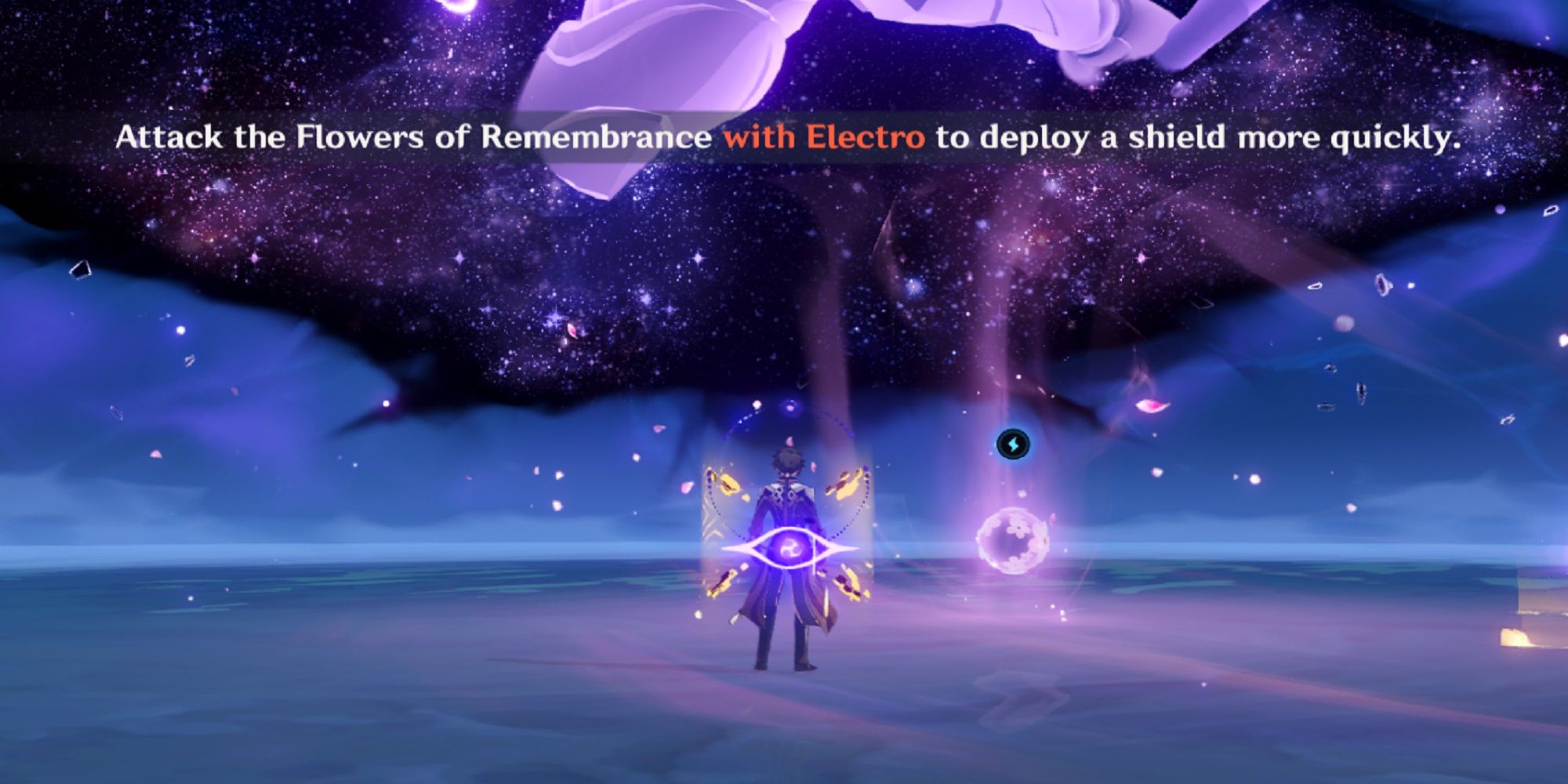 If Raiden Shogun covers herself and disappears into an eye-shaped void in the sky, this indicates her most powerful attack. An orb-like Flowers of Remembrance will be left on the ground and must be hit with Elemental attacks in order to charge up. Electro attacks are especially effective for this, and fully charging the orb will deploy a shield that will protect you from Raiden Shogun’s incoming strike. Failure to deploy this shield will almost always guarantee instant death for your active character.

To remove Raiden Shogun from her Baleful Shadowlord state, you must fully deplete her Electro shield. This is best done via Cryo and Pyro DMG; however, Raiden Shogun will also consume a portion of her own shield each time she attacks. In this way it is possible to wait until she depletes the shield on her own, but waiting for so long simply increases the chances she has to destroy your team. 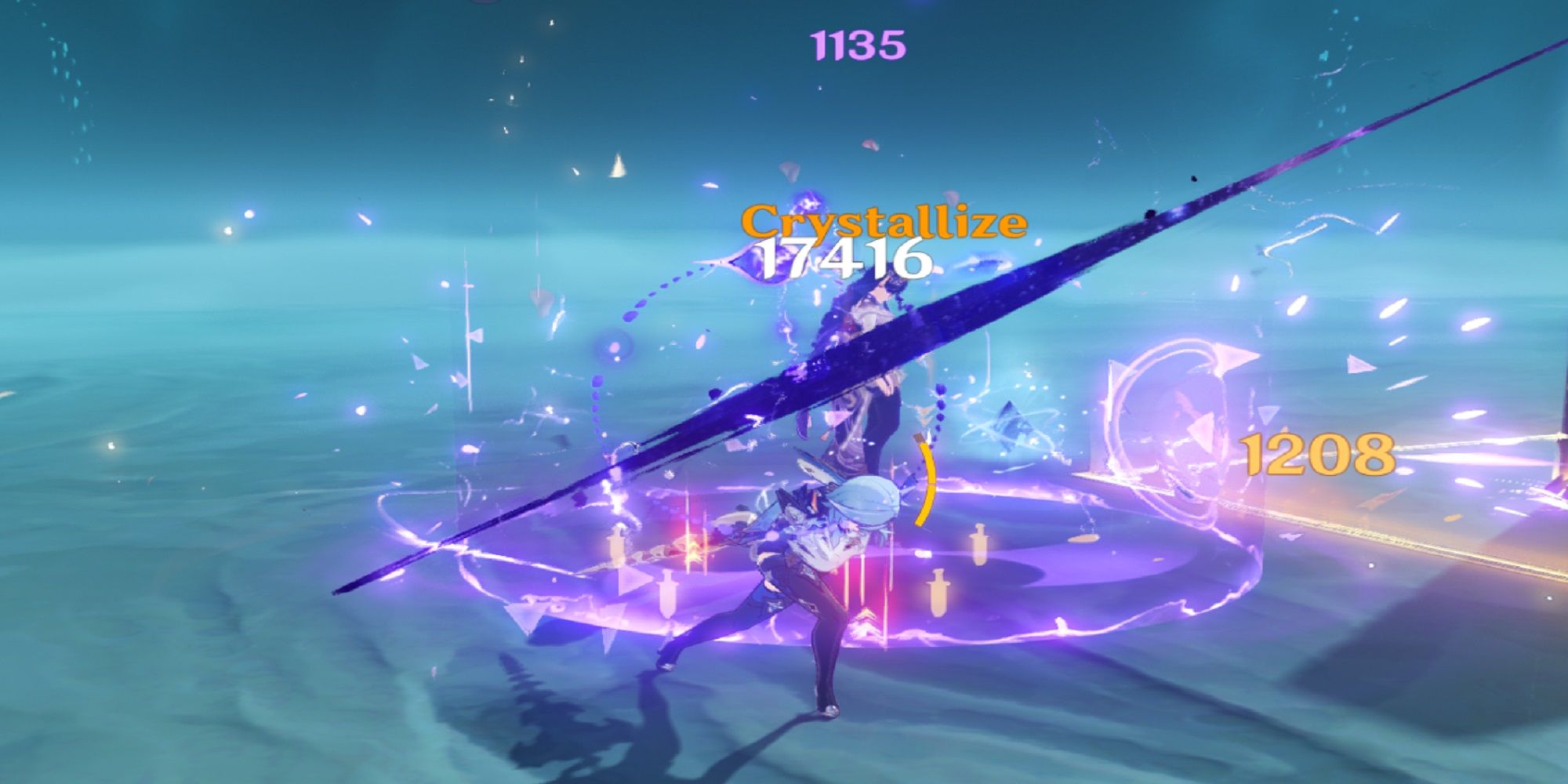 If you fail to defeat Raiden Shogun at this moment, she will return to her Musou Isshin Stance or Engulfing Lightning Stance. Once again she will begin accumulating Ominous Destiny, so make sure to beat her before it’s fully charged up unless you want to duke it out with her Baleful Shadowlord form a second time. 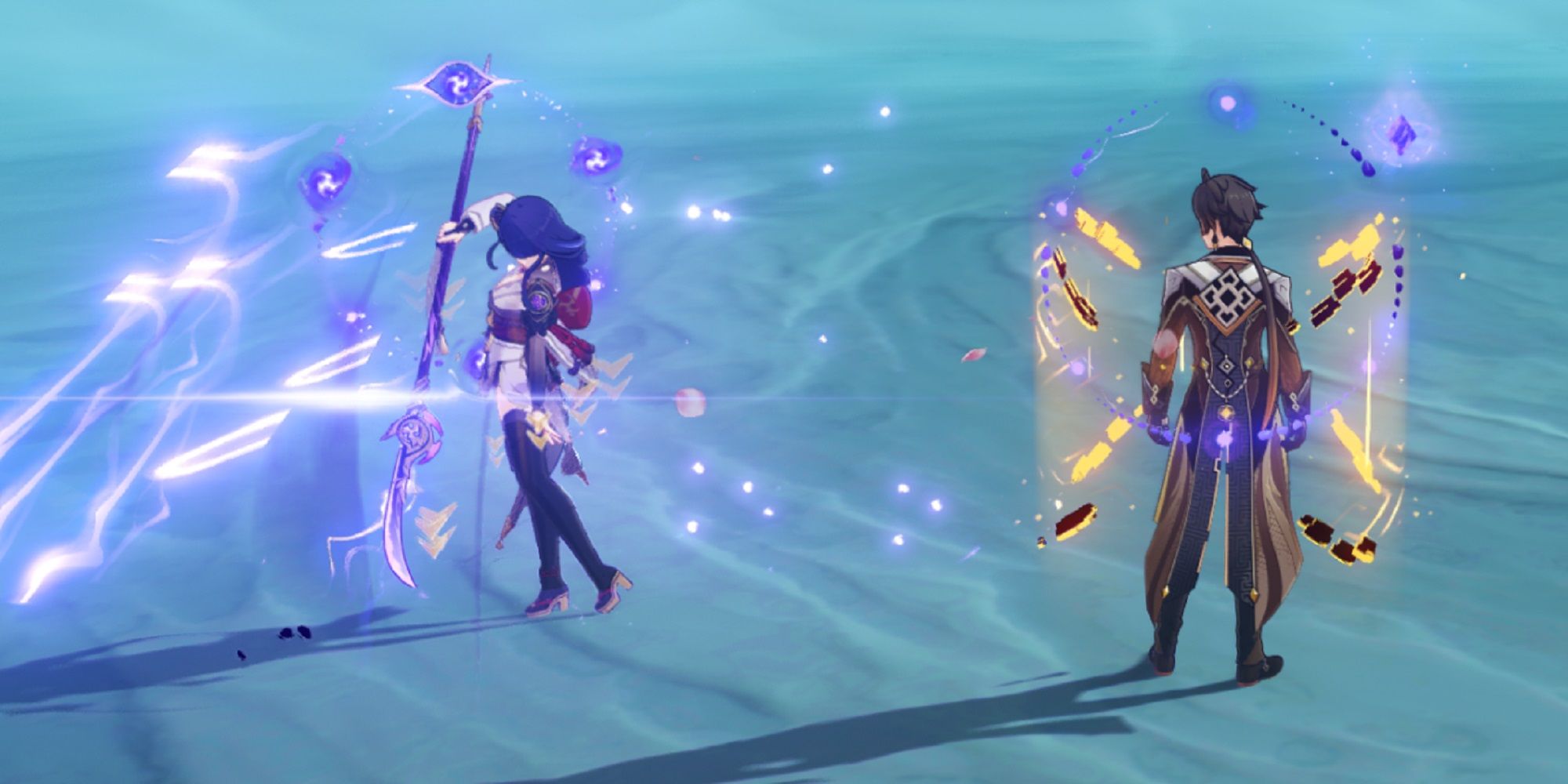 Raiden Shogun hits fast and hits hard, so characters that prioritize survivability are recommended. Even the most adept Genshin Impact players might have trouble evading every attack she dishes out, so a character that provides shields can ease this burden on your dodge button. Zhongli is the classic recommendation here since his shield is the most formidable in the game, but Diona, Noelle, or even Thoma could work in a pinch.

Healers can also alleviate some of the pressure from Raiden Shogun’s offensive onslaught, but you’ll still have to be wary of attacks with high, single instances of damage (a.k.a. basically everything during Raiden Shogun’s Baleful Shadowlord phase). Kokomi and Barbara are great options here since they can heal your characters without relying solely on their Bursts, but Jean or Qiqi might be decent options as well. Bennett can work also, especially for added damage during Raiden Shogun’s vulnerable phase, but the constant self-inflicted Overload Reactions combined with Raiden Shogun’s lightning-fast maneuverability means that it can be hard to utilize his Burst effectively.

In terms of actually taking down Raiden Shogun’s health bar, the game’s traditional DPS characters all work pretty well. Cryo characters like Ganyu and Ayaka or Pyro characters such as Hu Tao and Yoimiya are helpful for destroying the Baleful Shadowlord’s Electro shield and dealing consistently high amounts of damage. Putting at least one Electro character on your team isn’t a bad idea for dealing with the Flowers of Remembrance, and you could even use Raiden Shogun herself to do this if you’re feeling thematically-inclined to do so.