The final part of the Summertime Odyssey has arrived in Genshin Impact, and it brings along a brand-new quest called The Ancient Azure Stars. It takes you to the final mirage, which is dedicated to Mona. This is probably one of the hardest quests during this event, and rightfully so since it's the last one.

Upon finishing the quest mentioned above, you will unlock the Temple of the Star Latitudes, which is similar to the other mini-events in Summertime Odyssey — except for the Surfpiercer one. It takes you back to a domain similar to the quest you did earlier.

How To Beat Temple Of The Star Latitude 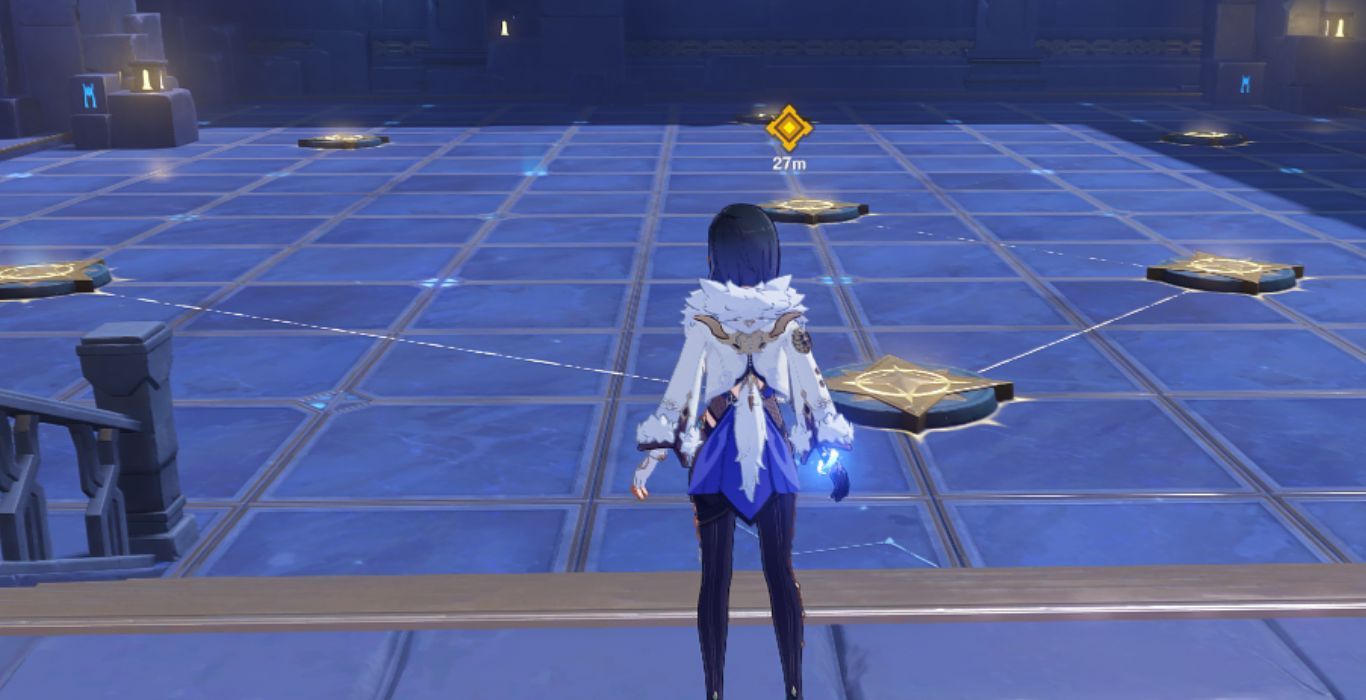 Once you've finished the main quest for the fifth day, during your vacation in the Golden Apple Archipelago, you can access the Temple of the Star Latitude event by heading over to the Events page on the top of your screen. Here, click on the Summer Odyssey event, and then on Event Details.

The bubble for this one will be in the middle of the bottom part, so click on it and then Go To Challenge at the bottom of your screen. This will guide you to the place you need to teleport to start the event.

Alternatively, you can simply open the map of the Golden Apple Archipelago and teleport to the place where you started Mona's mirage. 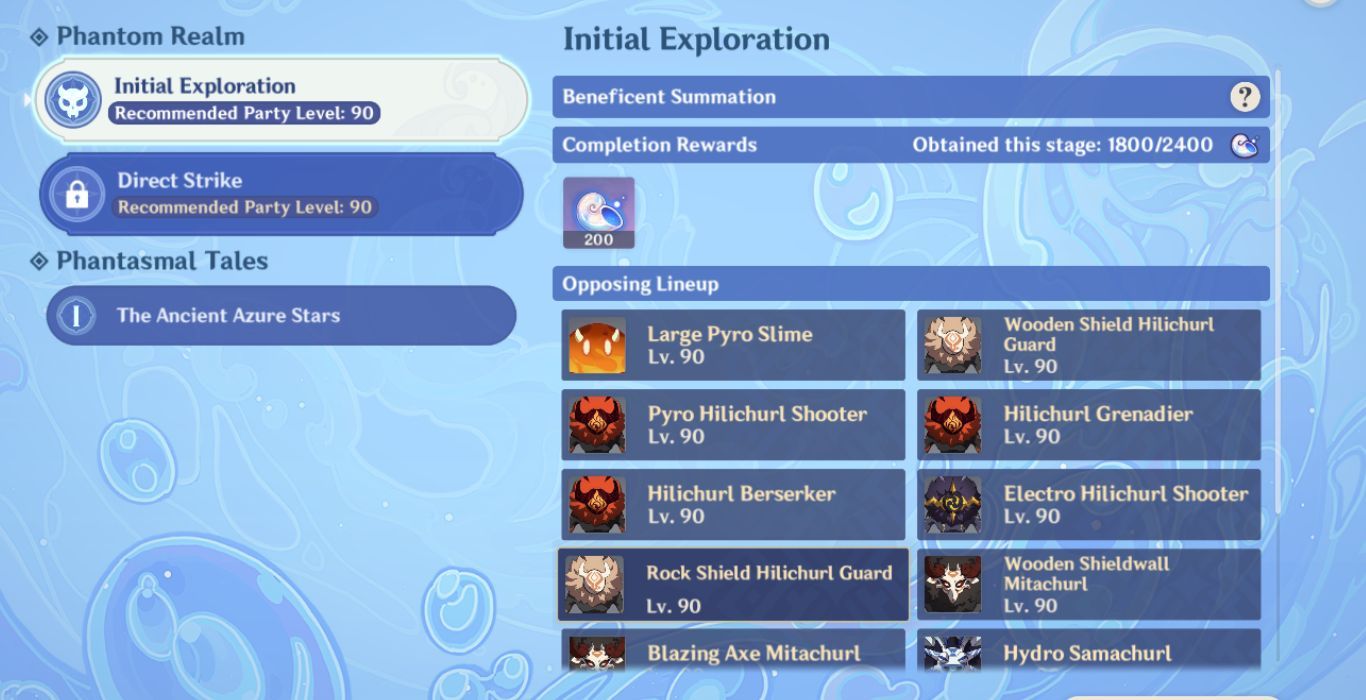 After interacting with the mirage, you will see a familiar screen where you'll see Phantom Realm and Phantasmal Tales. Much like the others, you just have to beat the Phantom Realm to get the rewards from the event itself. But, if you missed any conches or chests within the quest domain, you can go back in through Phantasmal Tales and find them.

In Phantom Tales, you first have to fully clear the Initial Exploration domain to unlock Direct Strike. You can see the lineup you'll face when you click on it. Once you're ready, enter the domain and go towards the yellow marker. 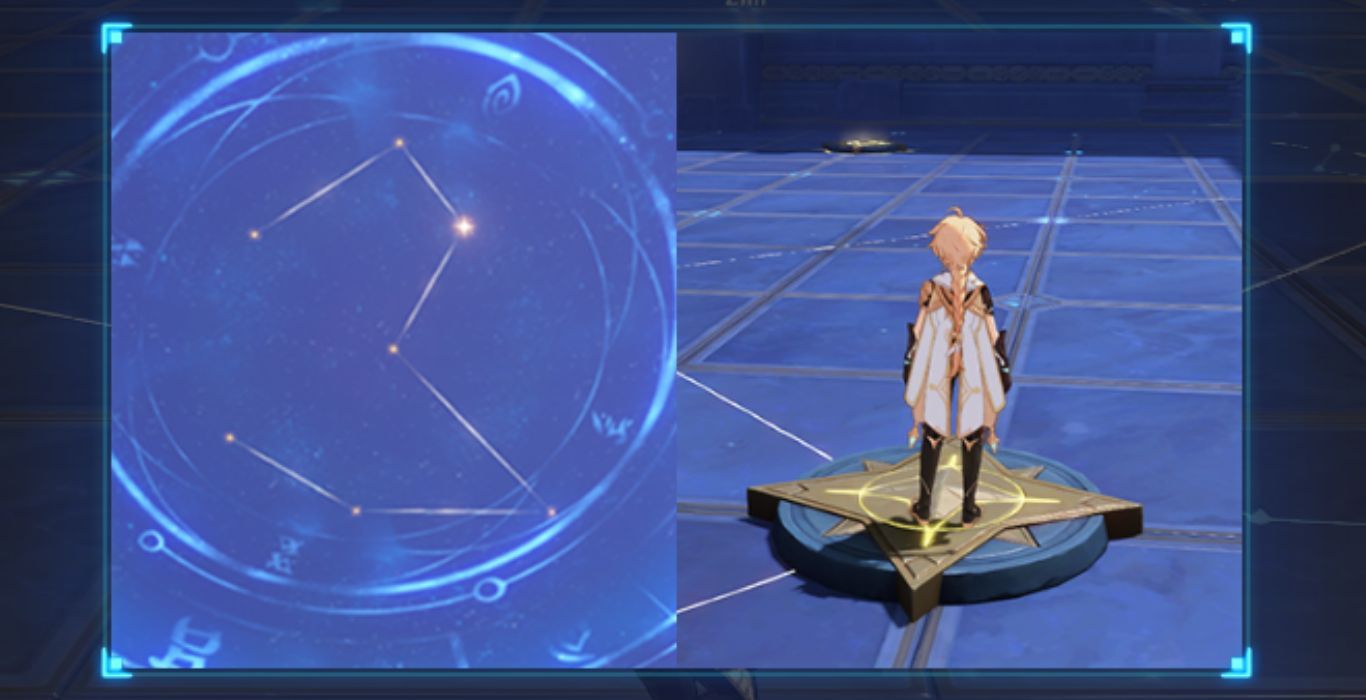 The domain will have pedestals on the ground and there will be a star pattern somewhere on the walls or the ceiling. Identify the brightest star on the pattern and step on the corresponding platform to unlock the next part. Once you've done that, follow the yellow marker to get to the first fighting platform. 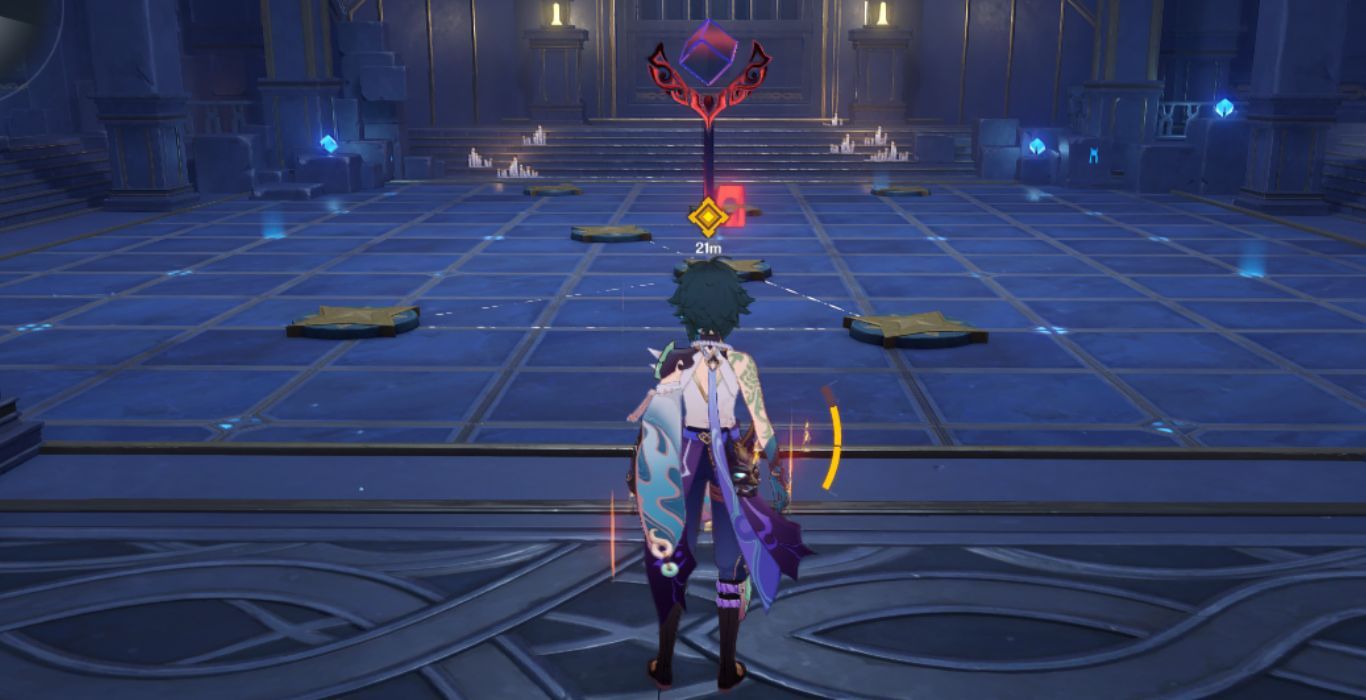 When you look at the pattern in these rooms, all the stars will have the same brightness until you start the fight. Once you begin, one of the stars will get brighter, and you have to find and step on it to unlock a random buff. There are three buffs that can be acquired randomly through this.

The first buff imprisons all the opponents in the room, and they take an extra 35 percent damage for eight seconds. The second one forms an aura around you, whenever your character touches an enemy, they are immediately defeated. The third one applies Hydro to everyone in the room and the frozen enemies take more damage. 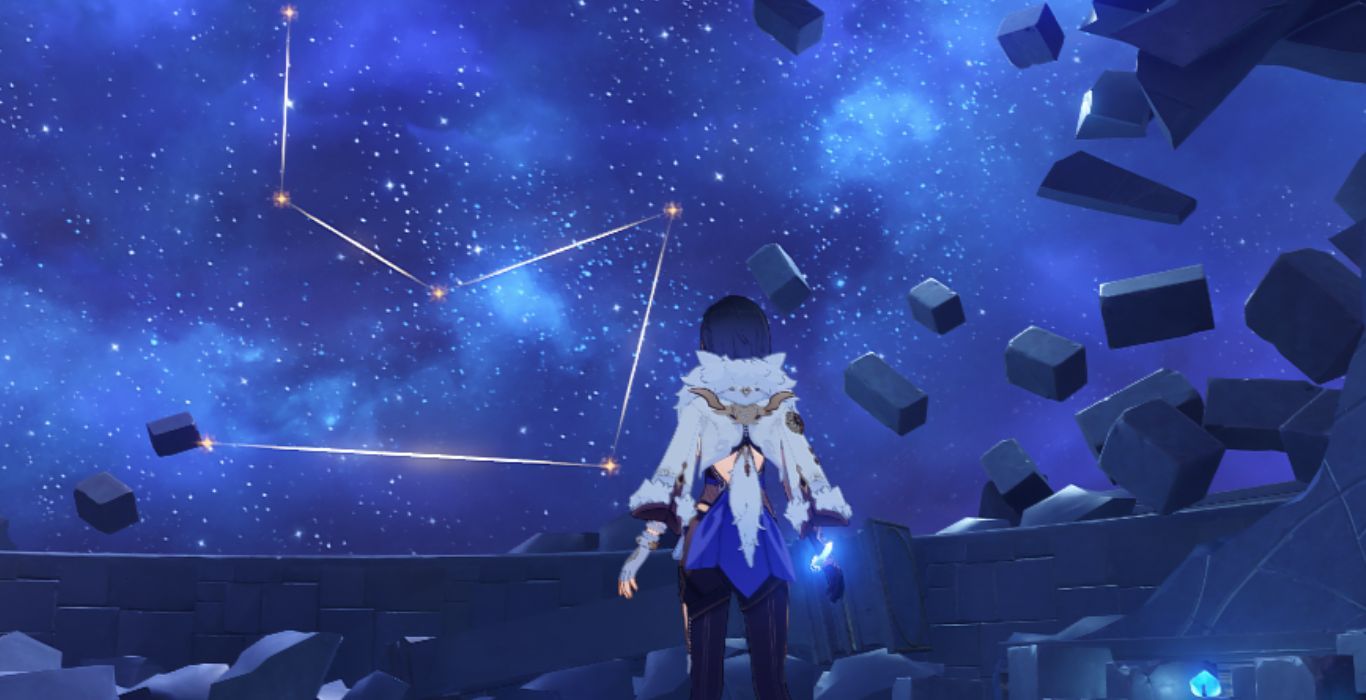 After finishing the fight in the first domain, head over to the yellow marker again to find the final platform. Defeat the enemies here to beat the domain. You need to repeat Initial Exploration or Direct Strike a total of three times while doing certain challenges.

During the final fight, enemies will spawn in three different waves. Every time a wave resets, another star will start shining brightly on the pattern in the walls. Make sure you keep an eye on the pattern to know when you can acquire another buff.

It is recommended to use a Cryo character within this domain as you can deal a lot more damage when you acquire the third buff. Further, you can also use a character that forms a shield to protect yourself from damage when you're trying to step on the pedestals since these can sometimes be blocked by enemies.

Temple Of The Star Latitudes Rewards 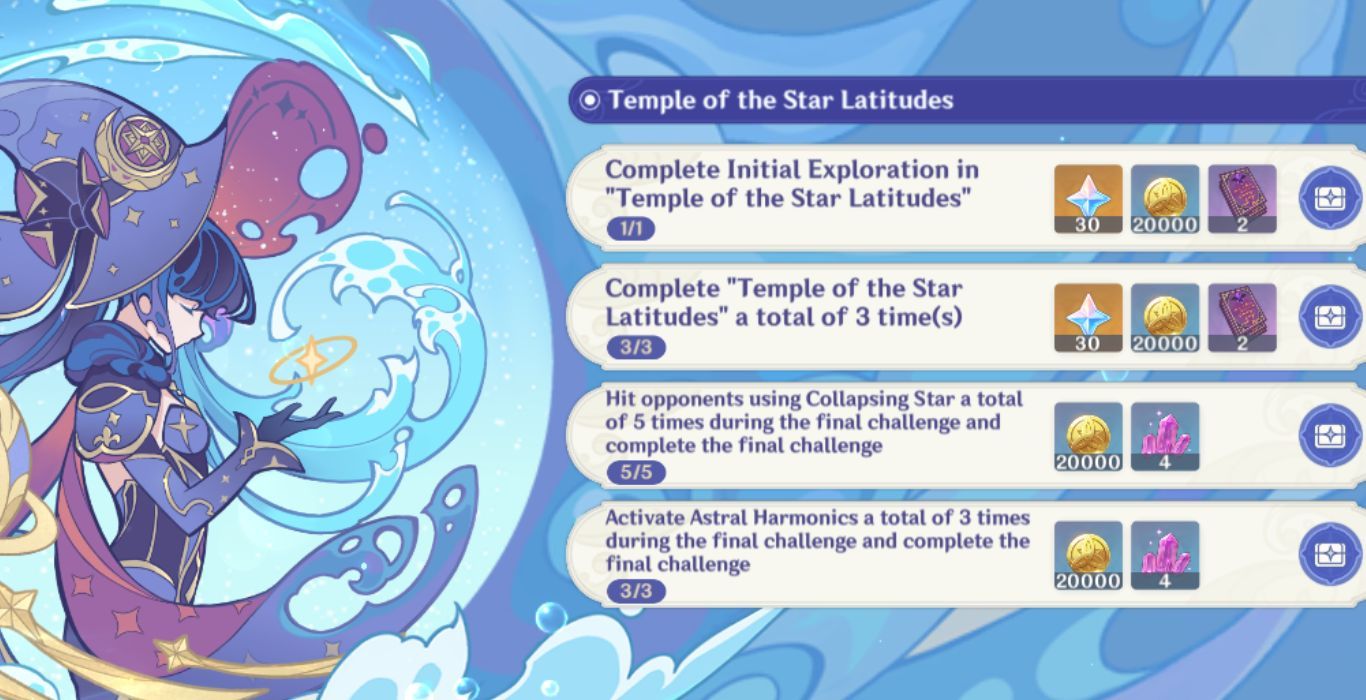 To unlock the main rewards, you're required to finish the Initial Exploration or Direct Strike a total of three times. Once you've done that, head over to the Event Details through the Events tab again, and you'll receive a total of 60 Primogems, 40,000 Mora, and four Hero's Wits.

Upon finishing these challenges, you will get another 40,000 Mora and eight Mystic Enhancement Ores. If you use all the abilities while finishing the domains thrice for the main rewards, you will be able to unlock these rewards without having to do the domain extra times.

Once you're done with the quest to unlock this event, all five mini-events will be unlocked, and you can finish them all to get bountiful of rewards. Upon finishing the four character mirage dedicated events, you can invite Fischl to your party.