If you want to get the most out of Arataki Itto in Genshin Impact, you’ll need to approach your build and general usage a bit differently than usual. Itto is rather different from your usual Geo characters and even from other DPS fighters. He relies less on flashy Elemental moves and more on brute force, which is good and bad in equal measure.

The good is that Itto dishes out plenty of damage. The bad is he can’t always take it in return. If you play your cards right and plan how and when you use his special abilities, though, Itto can be one of the most powerful characters in your party. 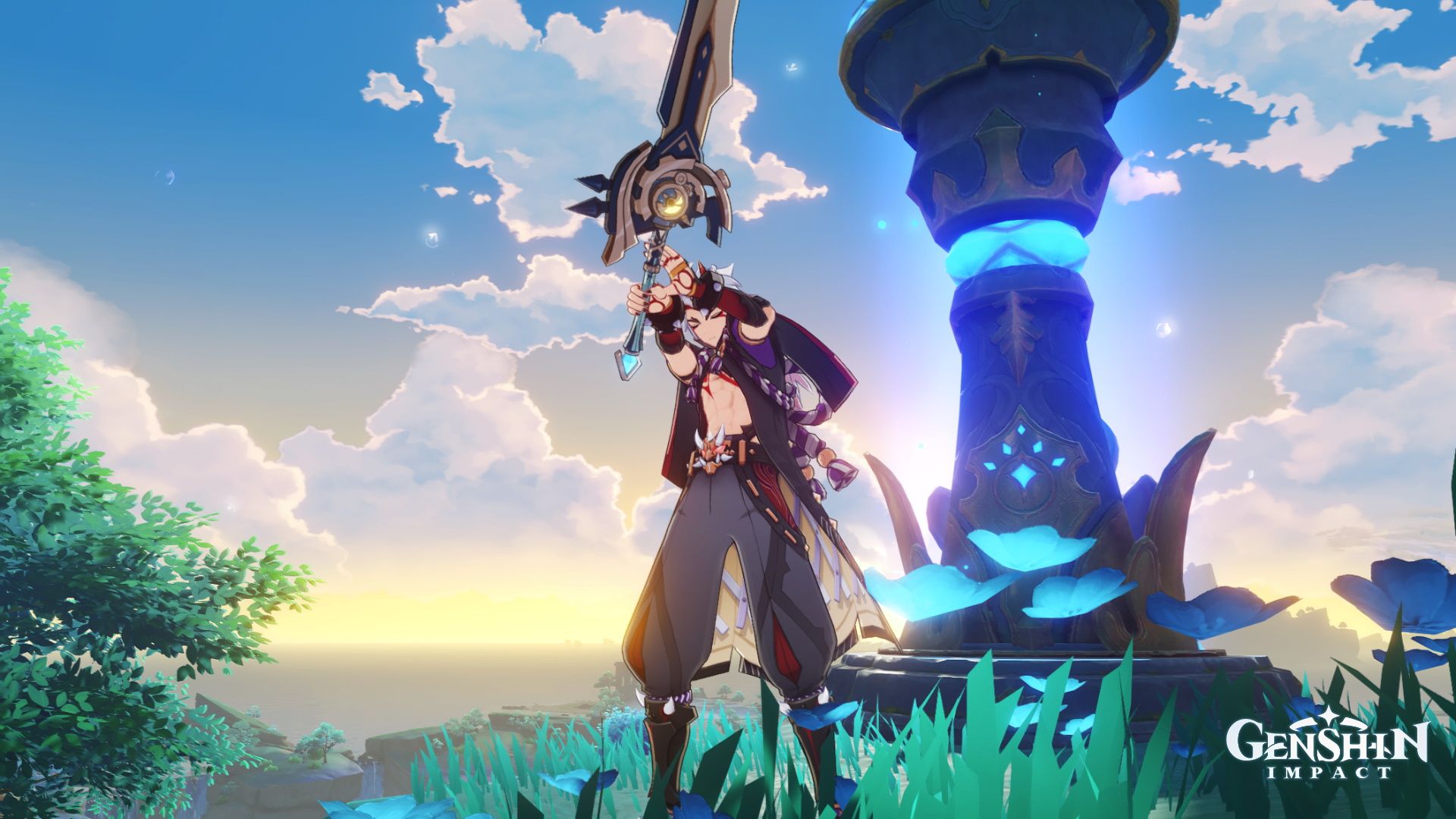 Itto is a rare instance where his Elemental Skill and Burst are less useful than his normal and charged attacks. Itto’s second and fourth normal attacks grant him a stack of Superlative Superstrength. Using a charged attack consumes one stack and turns into Arataki Kesagiri, a stronger attack with high interruption resistance that ends with a powerful slash. It also consumes no stamina.

In short, most successful Itto builds revolve around using normal attacks to power up his charged attack. This is how you’ll (safely) deal the most damage, rather than relying on Itto’s Burst and Skill.

Think Before You Burst 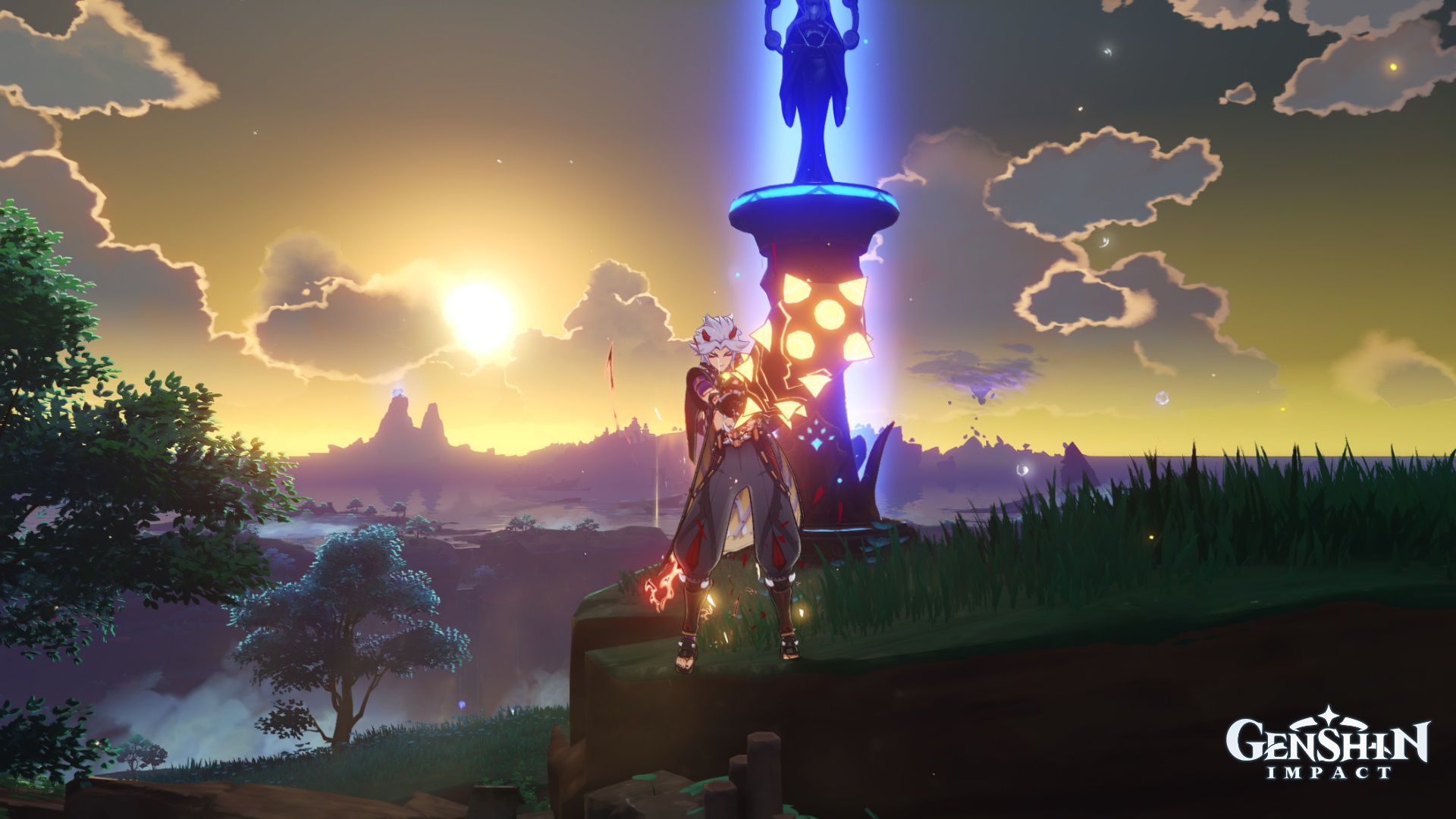 Itto’s Elemental Burst sounds great on paper, with its boost to attack speed and power. There’s a catch, though. The move also reduces Itto’s physical and elemental defense by 20%. It sounds like a small reduction, but if Itto is your main DPS drawing enemy attention, it’s easy for him to get overwhelmed quickly after activating the Burst. There is one way to help reduce the risk to him, though. 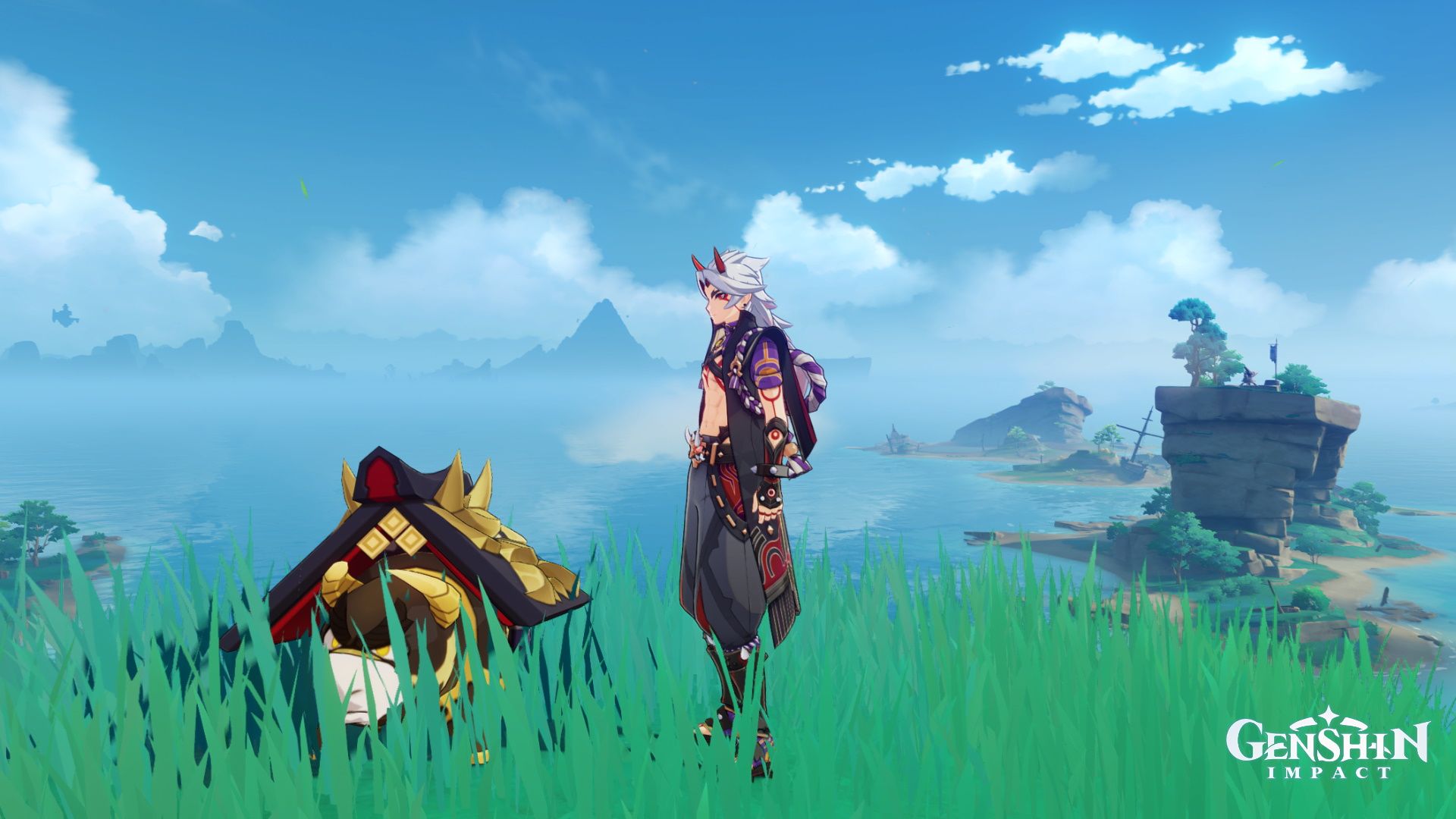 Defense Is the Best Offense 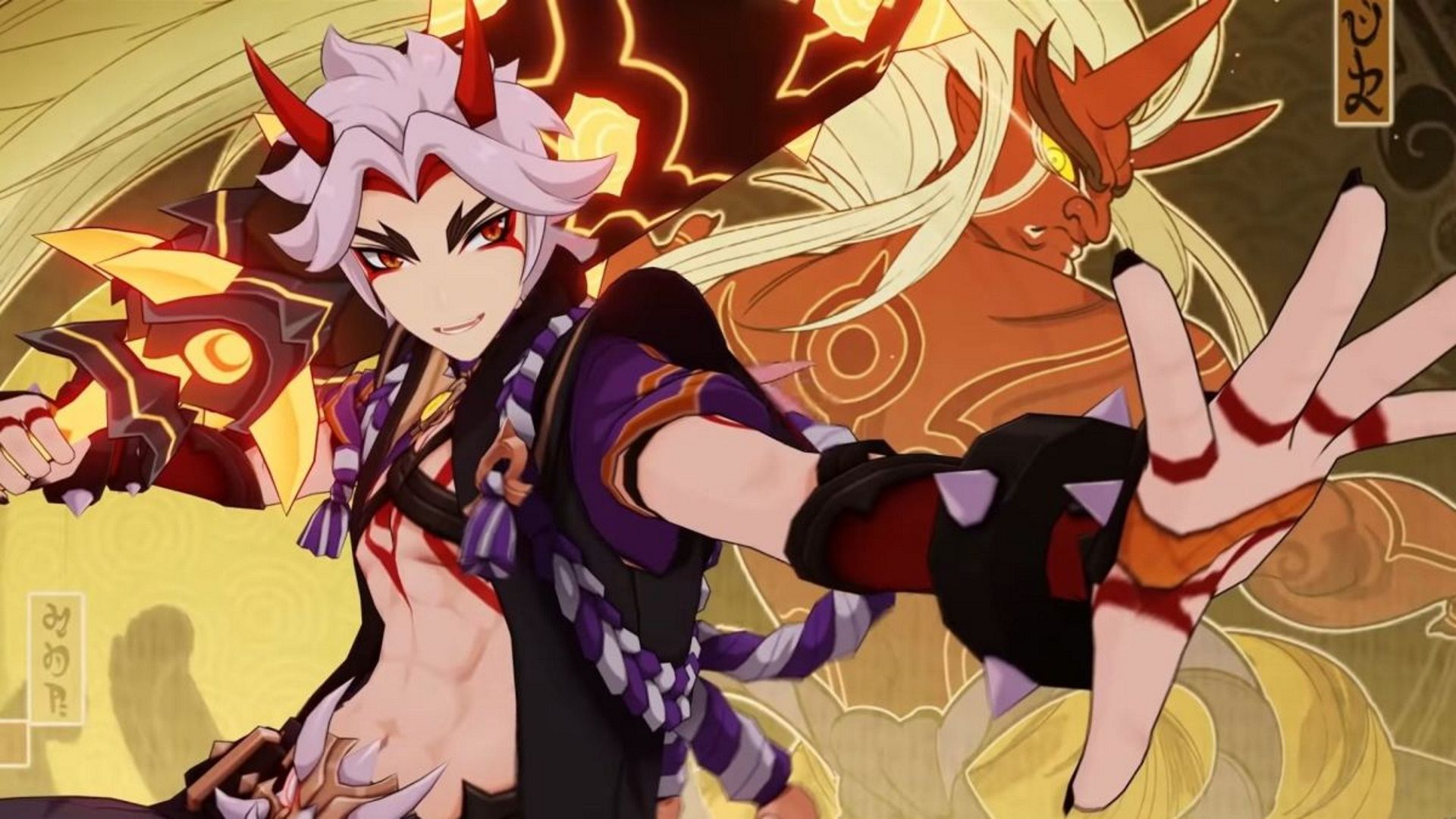 Itto’s passive talent Bloodline of the Crimson Oni increases the power of his Kesagiri slashes by 35% of his defense, which means it should be the primary focus of your build. Itto has high natural defense anyway, and bolstering it with Artifacts and weapons means enhancing his charged attack power and giving him a better chance at surviving after using his Burst.

Husk of Opulent Dreams is ideal for Itto’s Artifact set, but if you’ve got the patience, it’s worth trying to get Defense as your primary stat on the crown, chalice, and timepiece.

The Forge Is Your Friend 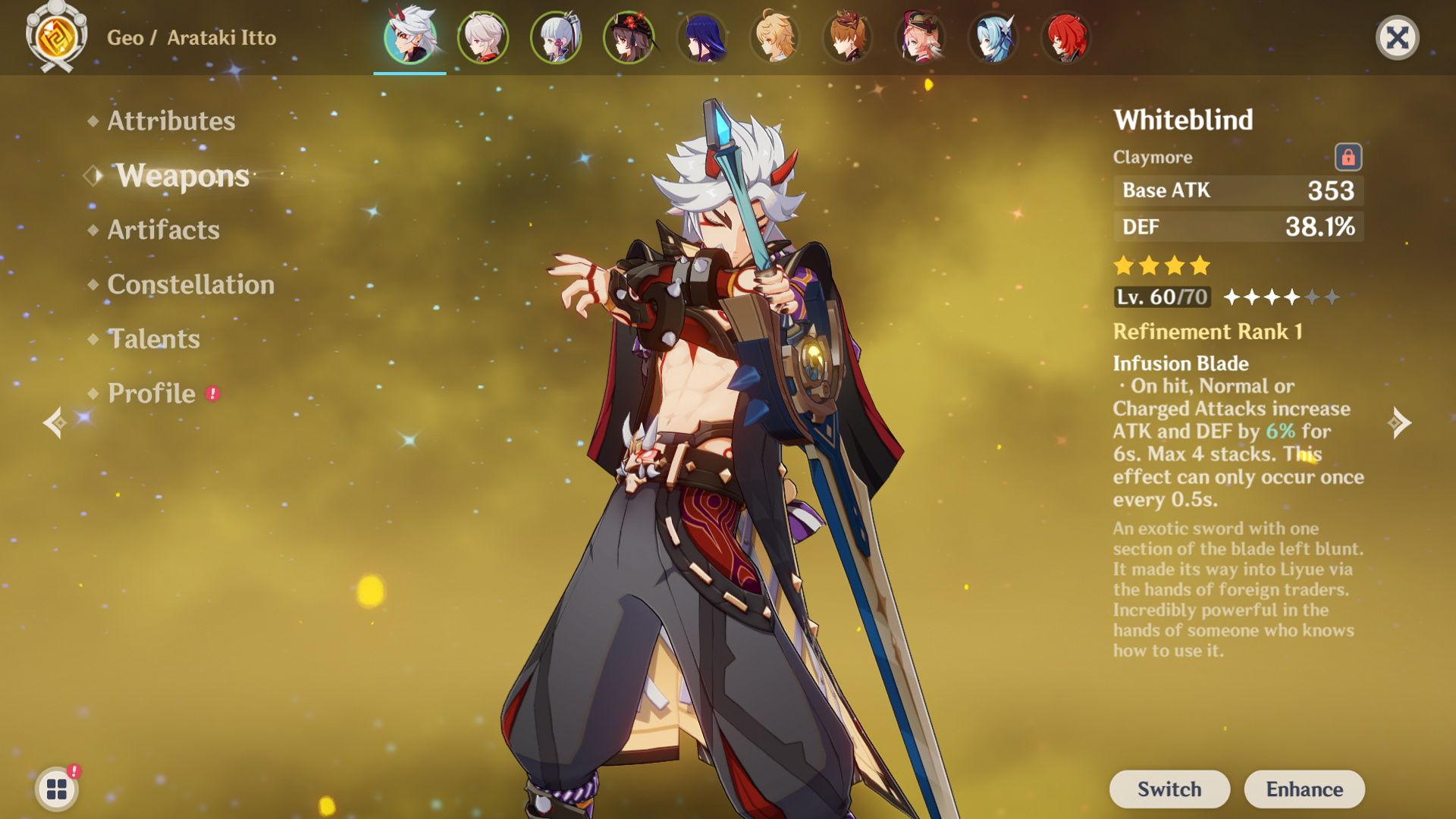 Whiteblind is, without a doubt, Itto’s best weapon. His signature club, the Redhorn Stonethresher, may increase his defense and charged attack, but it’s nearly impossible to refine those buffs – especially now that the weapon’s banner is over. Whiteblind’s secondary stat increases the user’s Defense, and its refinement skill boosts the wielder’s attack and defense when they land a hit. Since it’s a craftable weapon, you only need the right Billet to make more and max out its passive skill. 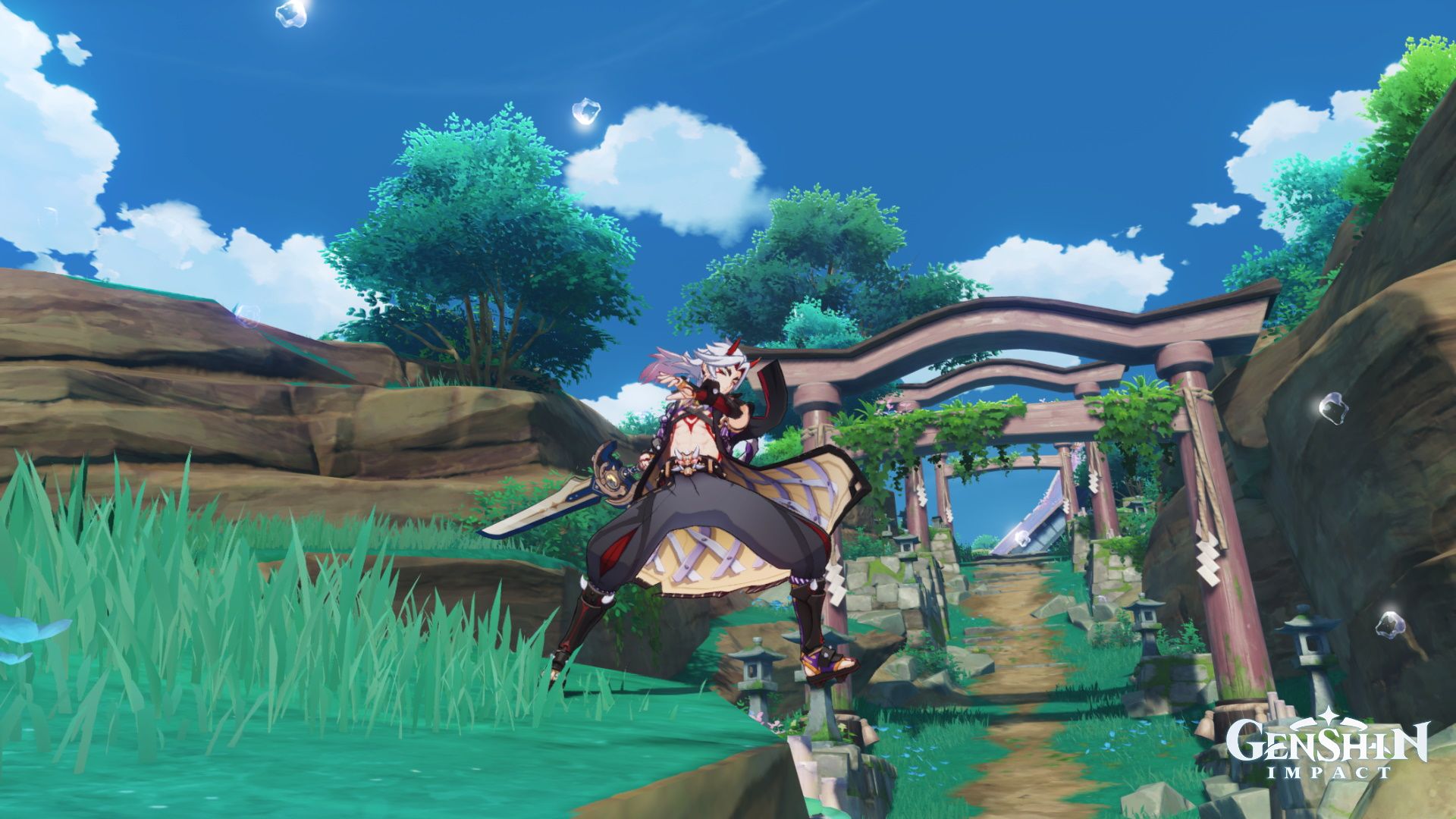 Itto may excel at dealing damage, but that’s about all he’s good for. You’ll need to plan a good support team around him if he’s your primary DPS. Characters with long-lasting support skills, such as the healing circles Bennett creates or Noelle’s shield, are a solid choice for any Itto team.

Speaking of shields, Itto is terrible at triggering Crystalize. If you need shields for your team, plan on bringing another Geo character, such as Ningguang or Gorou, who can protect the party more reliably. Shenhe makes a good sub-DPS with her Spirit Communion Seal passive talent, which increases the party’s normal, charged, and plunged damage by 15% after using the hold version of her Elemental Skill.

Finally, it’s worth having an Energy battery in the party as well, since Itto doesn’t generate many Energy Particles.