The Geo Traveler’s role in Genshin Impact is difficult to figure out compared to their Anemo and Electro versions. Geo is primarily a support element, but the abilities for this variation of the Traveler have solid DPS potential as well. Their main function is giving you greater control over the battle arena, either through creating obstacles or pushing foes away, while dealing strong single hits at the same time.

The Geo Traveler’s Burst also has a couple of passive attributes that make them ideal as a support character. The best way to use them draws on each area of their potential, and while it does mean they never excel in one particular area, they can still be an invaluable addition to any party. 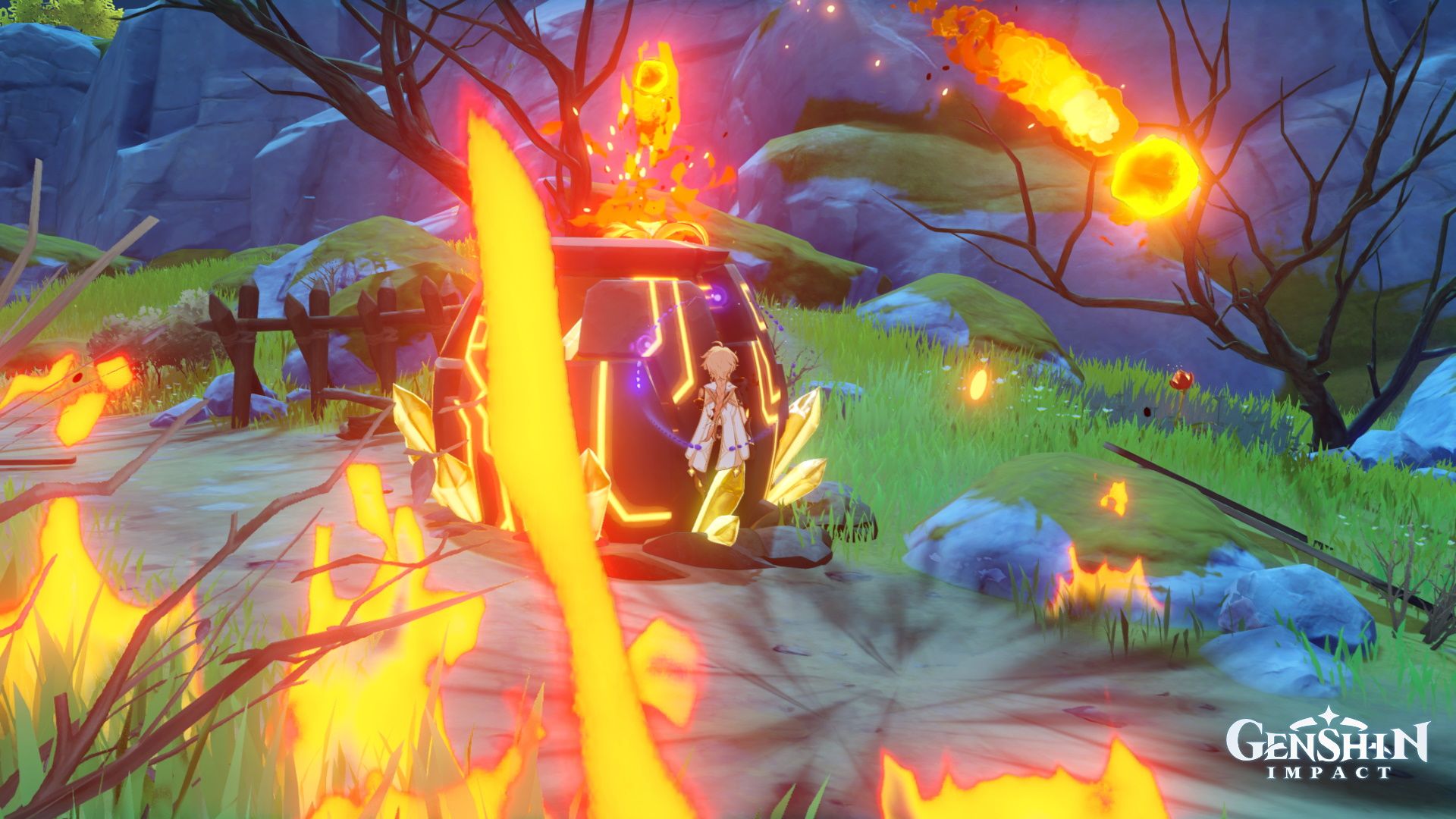 Geo’s main use is creating shields, and while the Geo Traveler is still fairly good at that, you can also use the Starfell Sword construct to create an obstacle that shields you from incoming attacks.

Multiple Starfell Sword constructs can exist on the field at once, so you can shape the battlefield to your will.

It’s not a guaranteed block – lobbed projectiles can still reach you, for example – but it’s a good way to block paths and keep melee attacks from connecting.

Keeps Foes at a Distance 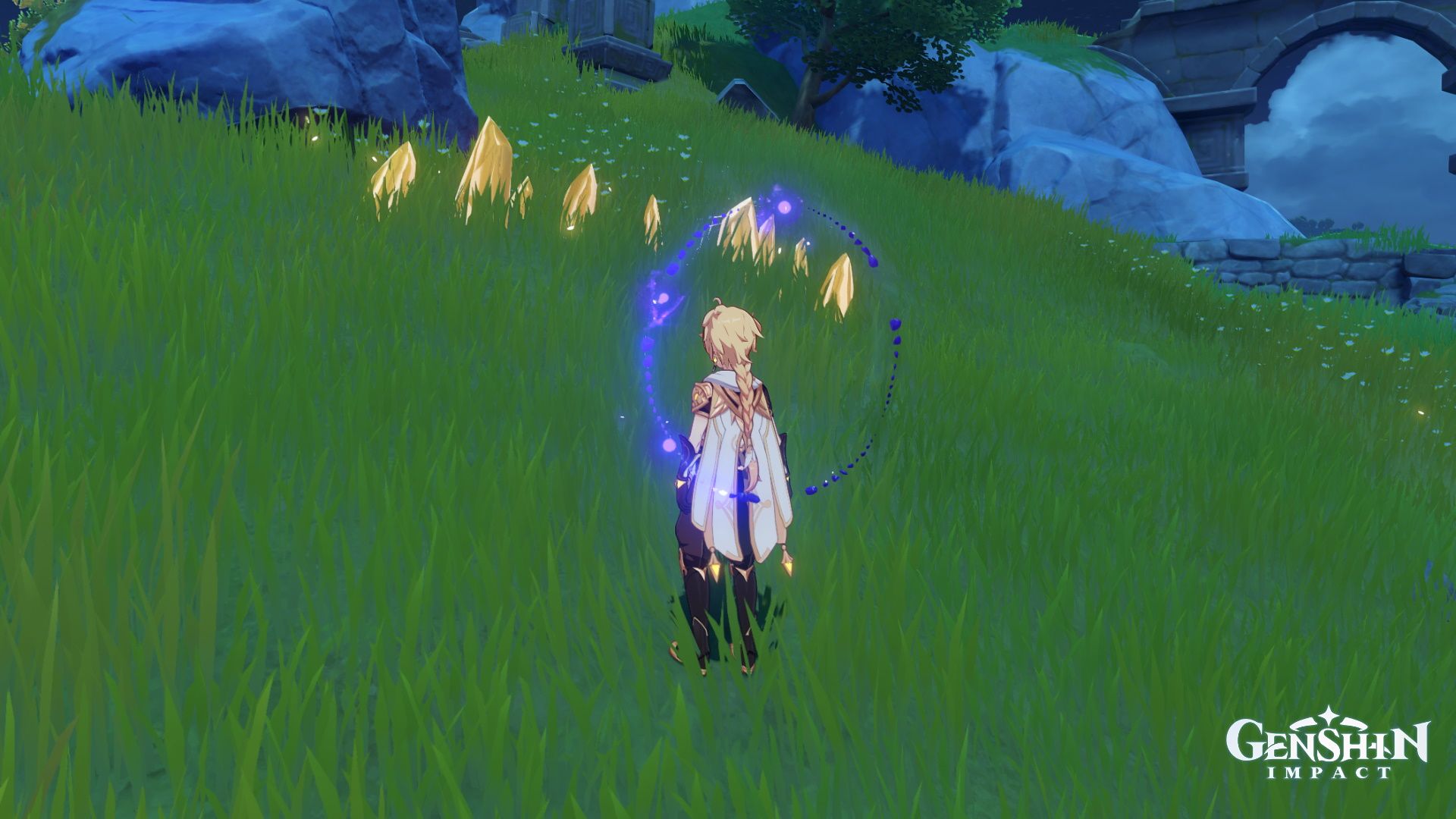 Most Elemental Bursts exist to deal high damage, but the Geo Traveler’s is a bit different. Its pulse effect can deal heavy damage, but the primary use is creating a safe area and giving you greater control over the battlefield.

The Geo shockwave creates a ring of crystals at the end of the attack that linger for 15 seconds, keeping enemies at bay and letting you pick them off as you see fit. 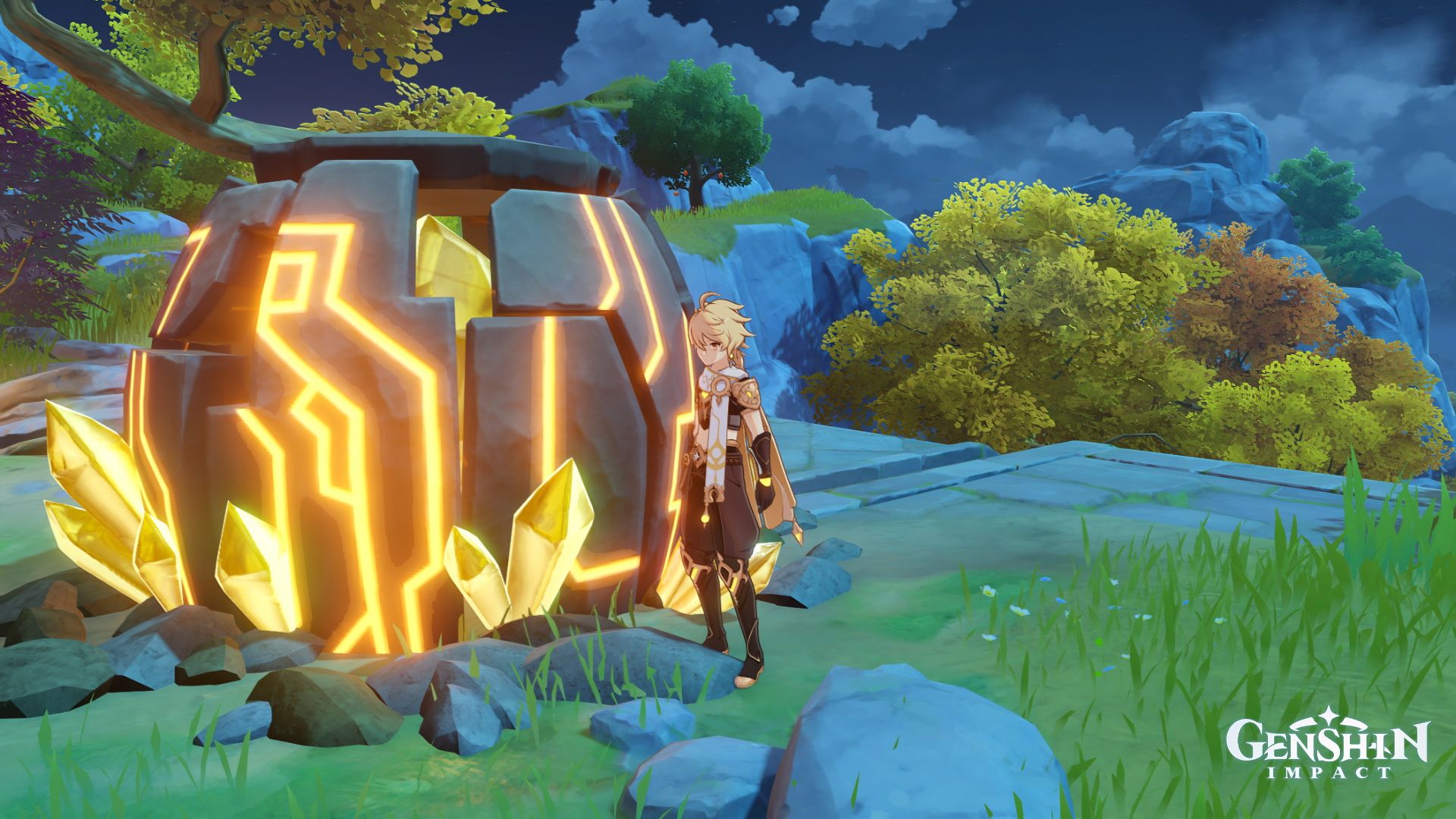 If you’re playing through the Chasm or have Zhongli in your party, you’ll want to make use of Starfell Swords in another way: Geo resonance. This is separate from the actual Elemental Resonance you get from having two Geo characters in your party. Zhongli’s Stone Stele resonates with other Geo constructs to extend its area of effect and deal heavy Geo damage to foes in its range.

Ningguang’s Jade Screen and Arataki Itto’s little bull count as constructs too. Coordinate your attacks to maximize the resonance’s reach.

Starfell Sword lasts the longest of the various Geo constructs you can build, including the barrier formed by the Traveler’s Burst, making this a perfect way to bolster Zhongli’s attack power even when he’s off the field. 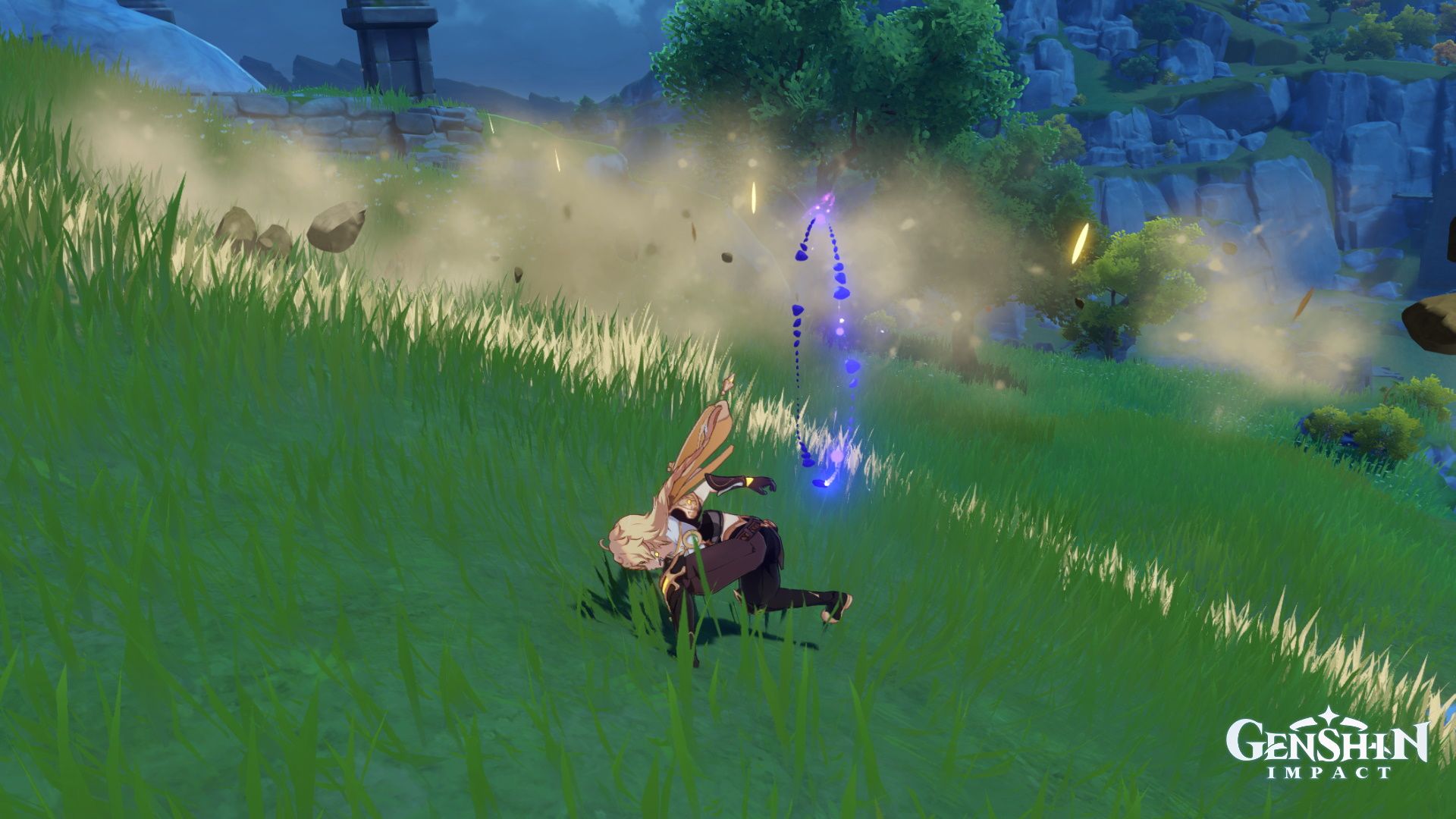 Once you’ve unlocked the Geo Traveler’s first Constellation, Invincible Stonewall, their Burst gains a different function. Any character in the shockwave – which includes all of your party members – gets a ten percent increase to their critical hit rate. It may not seem like a lot, but it’s highly effective for characters whose critical damage scales with their level, such as Diluc and Ayato.

Use The Sacrificial Sword 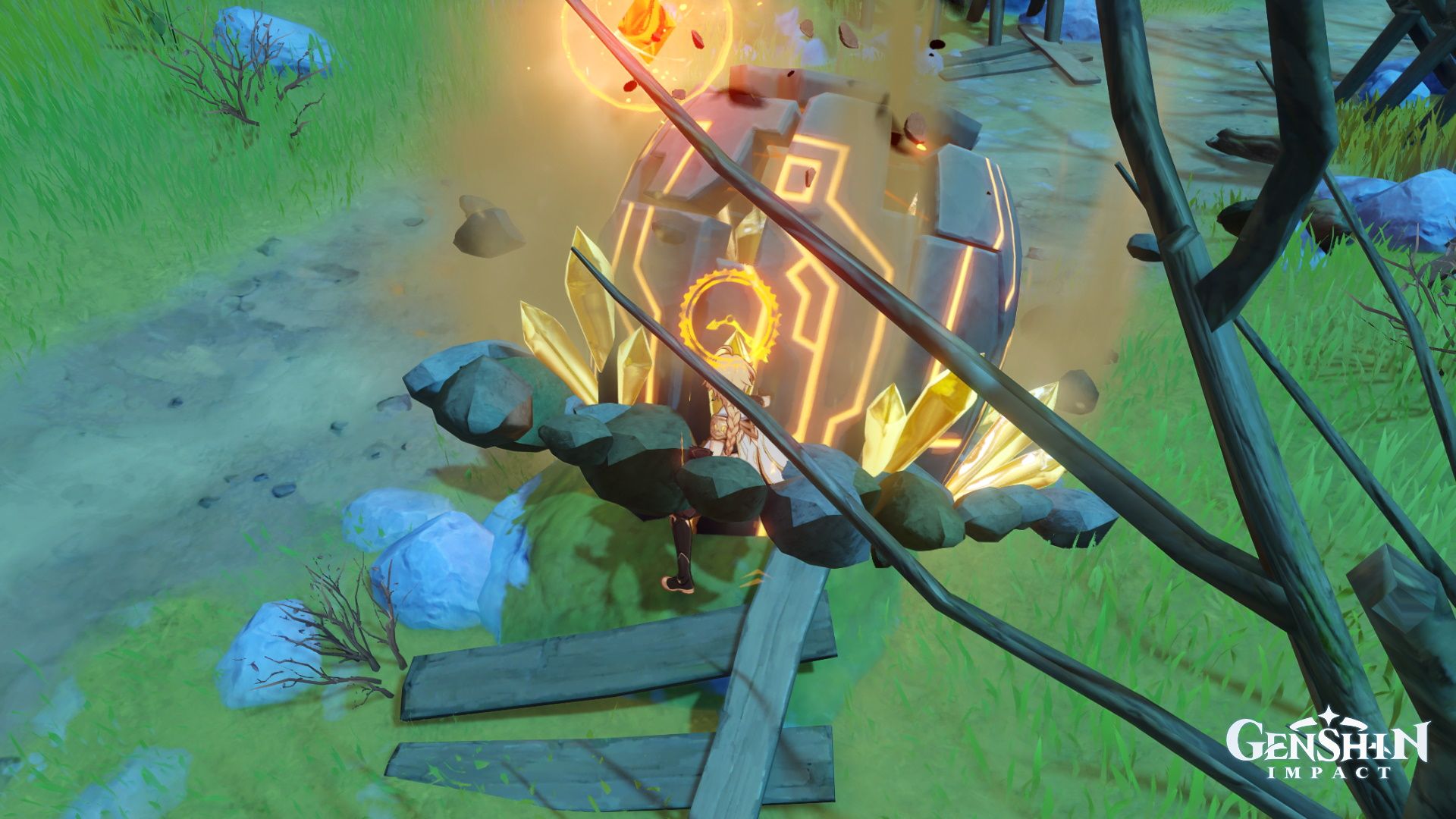 Equipping the Geo Traveler with the Sacrificial Sword, especially one at higher refinement levels, lets you unleash almost double the number of Starfell Sword attacks. The weapon’s passive skill grants a high chance of ending the user’s Elemental Skill cooldown. Starfell Sword’s cooldown is already relatively short, especially compared to the Electro Traveler’s, and ending it sooner gives you an extra opportunity to either build another obstacle or deal heavy damage to your foes.

Press the Skill button instead of holding it to automatically target a foe. This method is good for dealing damage, but won’t build a construct. 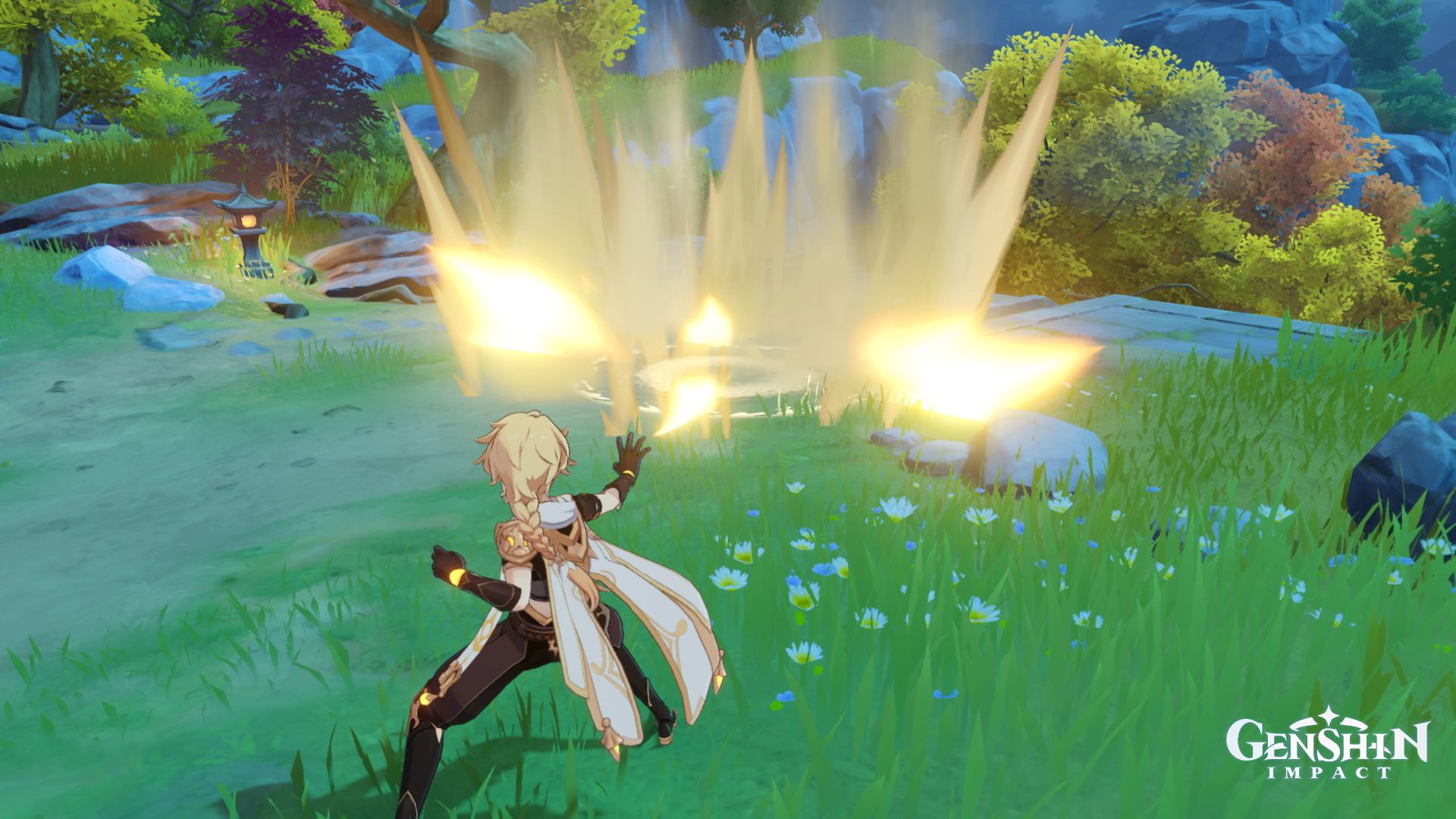 The Geo Traveler functions as support or DPS, but not necessarily both at the same time. You can focus on buffing their offensive abilities with Artifacts such as Noblesse Oblige and Gladiator’s Finale and see impressive results, despite the Traveler’s low base attack.

Alternatively, you can focus on support, using Noblesse Oblige or Archaic Petra to boost the party’s damage output through the Traveler’s Burst and enhancing that Burst’s power in the process.