If there’s one thing the God of War series is good for, it’s finding new and interesting ways to adapt the myths. They didn’t drop the ball in God of War: Ragnarok either, using even the smallest game components to reference something new, including the collectible artifacts.

One of the artifact sets is dedicated to the mythical poet Kvasir, a wise man who is already dead by the time we first discover his poems. Not all is as it seems with them, however, as the poems are actually subtle references to different PlayStation-exclusive games. Between the content of the poem, the title, and the book’s cover, there are a lot of context clues given to figure them out.

14/14 The Sunrise Of Nothingness 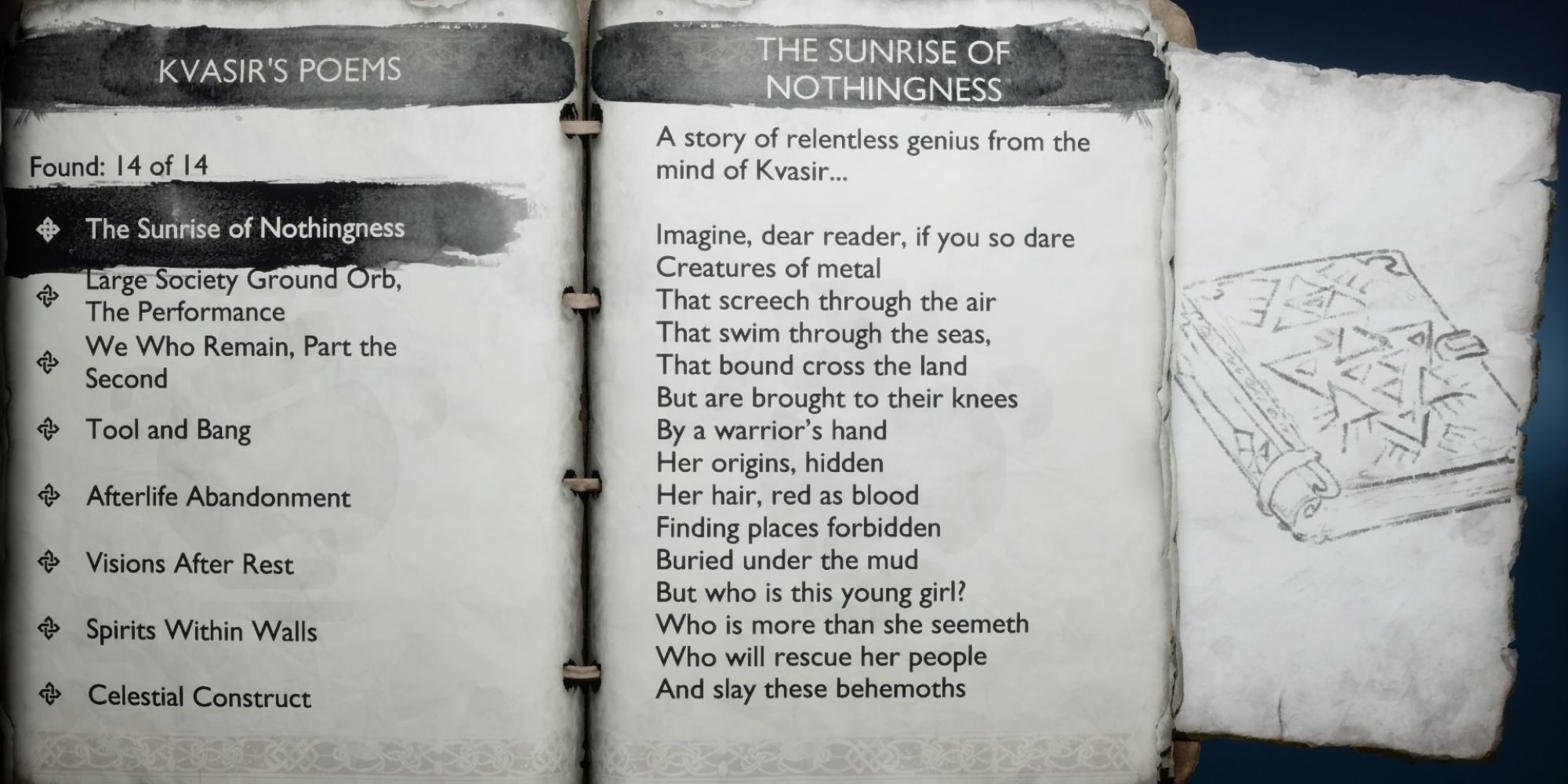 This poem references the popular Horizon: Zero Dawn. The creatures of metal in the air, on the seas, and on the land are the usual enemies you can find in the game. The warrior with hair red as blood of course refers to the game’s protagonist, Aloy. It even talks about her unknown past and other secrets she holds that are important to the game and the series as a whole. The sketch of the book’s cover even references the triangle motif seen throughout the game. 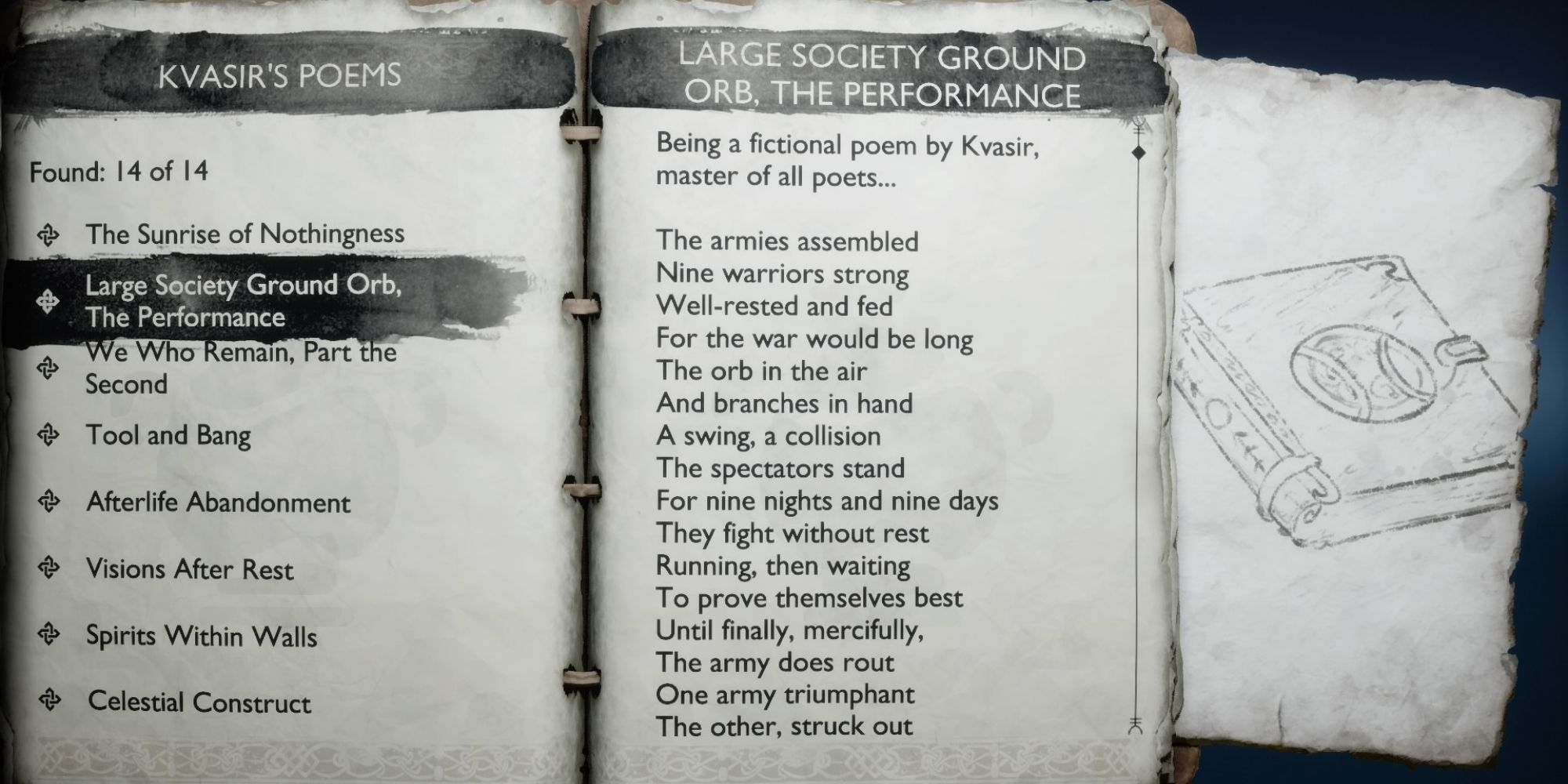 You might recognize this as a retelling of a baseball game. That’s because this poem references MLB The Show, which was originally a PlayStation exclusive. Essentially, the two armies of nine are the two baseball teams, their bats are branches, and the nine nights and days refers to the nine innings in a game. Perhaps the most obvious way to determine this, however, is the last line of the poem about the team striking out, and the sketch looks almost exactly like a baseball. 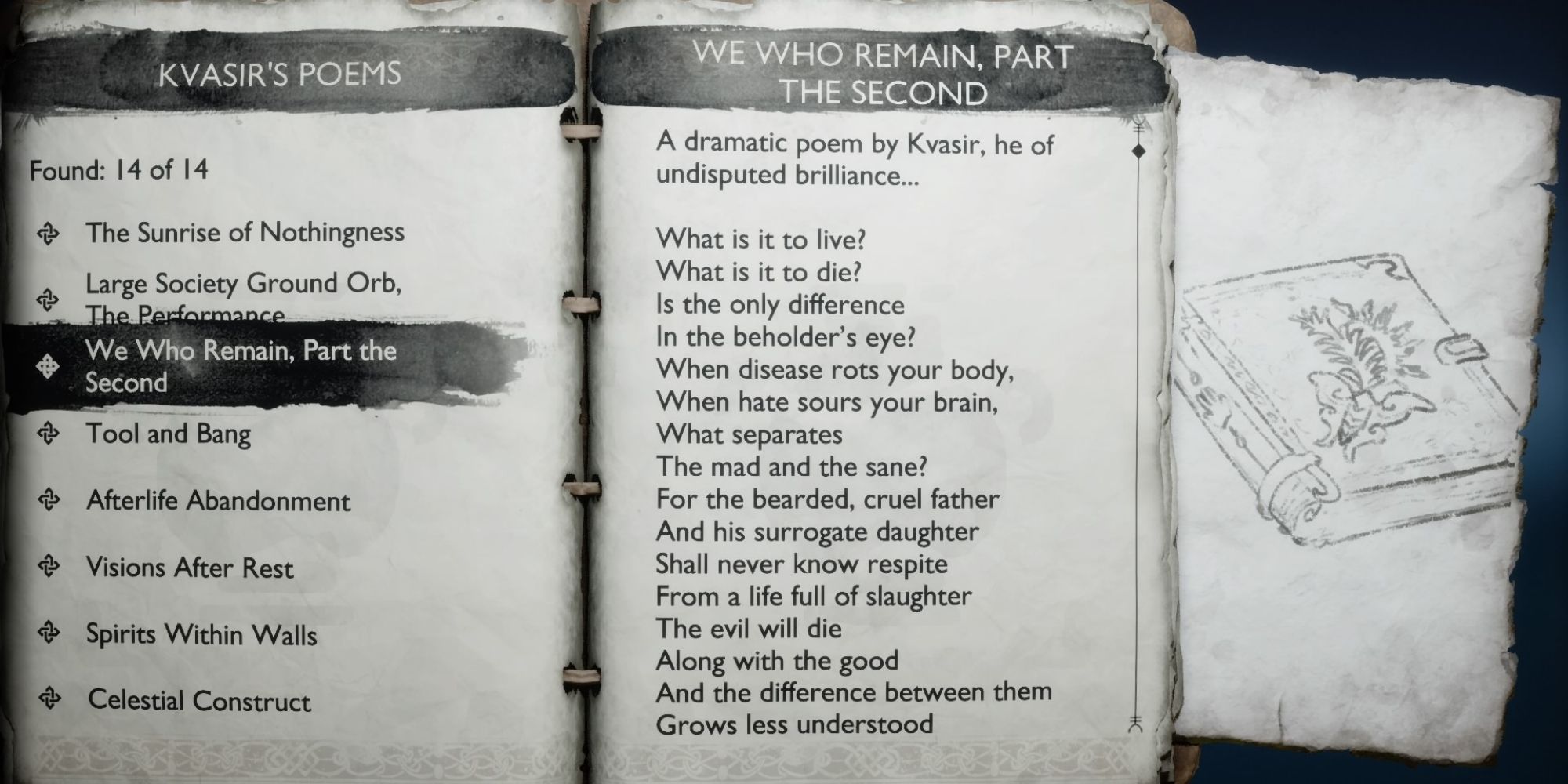 The Last of Us series is referenced in this poem. The first half seems to directly talk about the virus running amok in this post-apocalyptic society, especially when mentioning the disease of rotting bodies.

The second half mentions a father and daughter pair, referencing Joel and Ellie, along with the long, painful story they’ve had to face together through both games. The book’s cover, while maybe not entirely recognizable at first, is a moth that has become a symbol throughout the games. 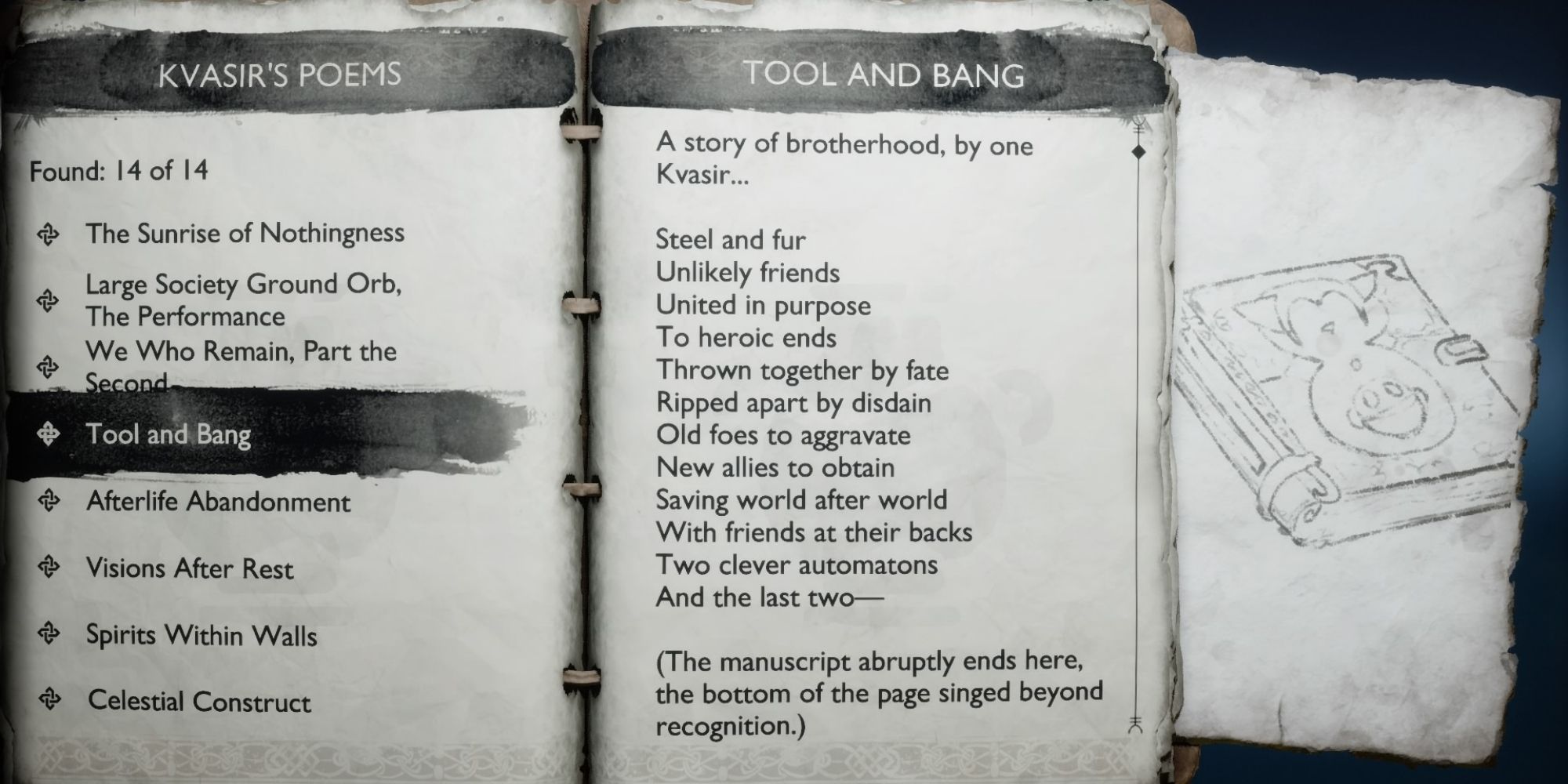 This poem is a reference to Ratchet & Clank, the words of the title being direct synonyms for the two protagonists, alongside the first line with steel and fur. It talks about their relationship not only with each other but with people they meet along the way. The line with friends at their backs also talks about how Ratchet carries Clank along on his back during the journey. If you look at the cover too, you’ll see a symbol intended to resemble the two protagonists. 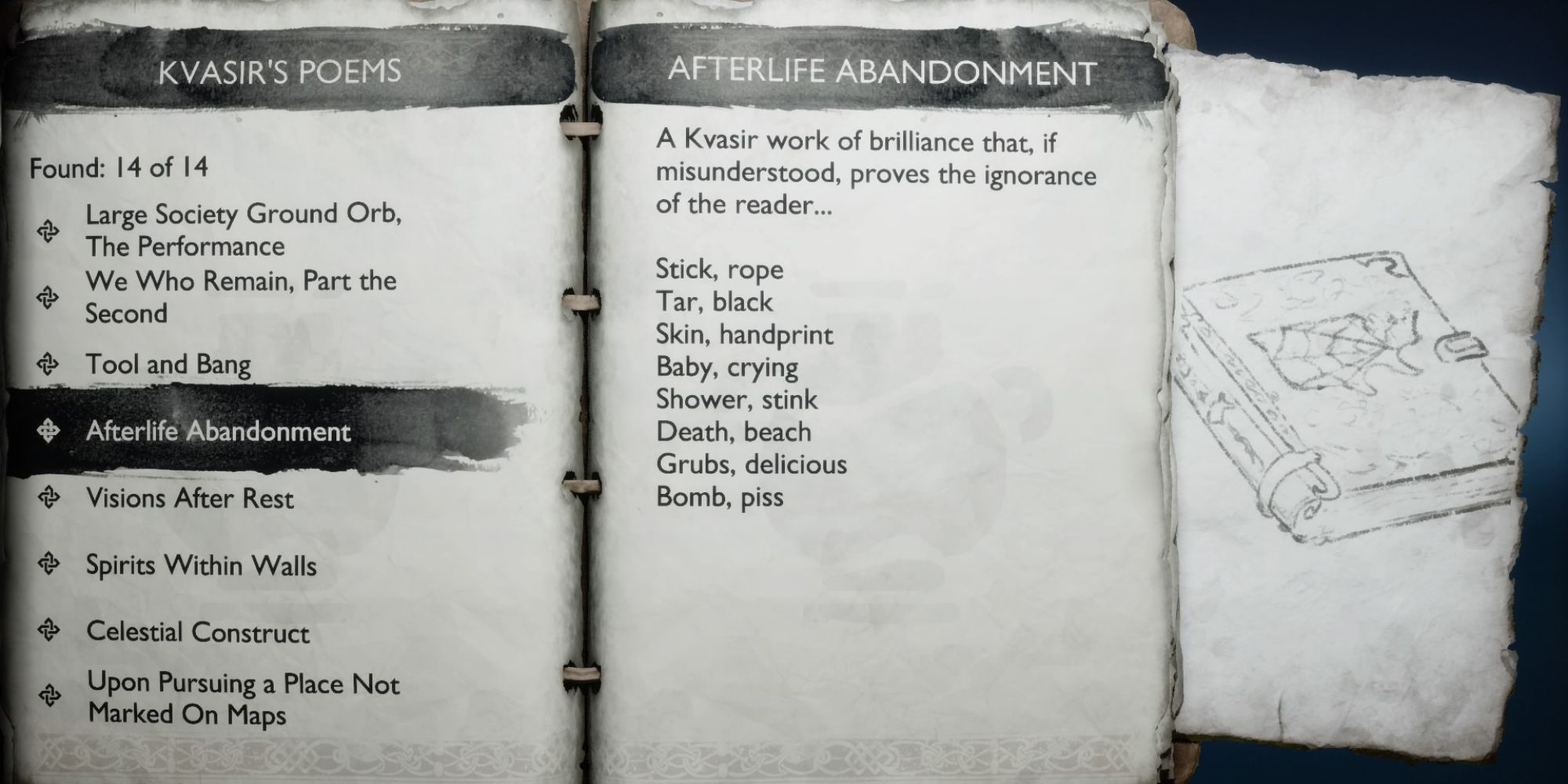 If you’re not in the know, this poem references Death Stranding. While being a nice change of pace from the other lengthy poems, if you’ve never played the game, it will be next to impossible to understand properly. Even the introduction of the poem is a reference, talking about designer Hideo Kojima and how his games are complex and often bizarre. The drawing is very clearly a rough approximation of America, connecting together the colonies players are tasked with building in the game.

This poem references the lesser-known game Dreams. The imp mentioned in the poem and seen on the cover is the player-controlled character in the game.

It also talks about how there is a wide range of possibilities in the game, only limited by one’s own imagination. This refers to the fact that players are given creative freedom, able to design and mix worlds that already exist in the game or new worlds of their own. 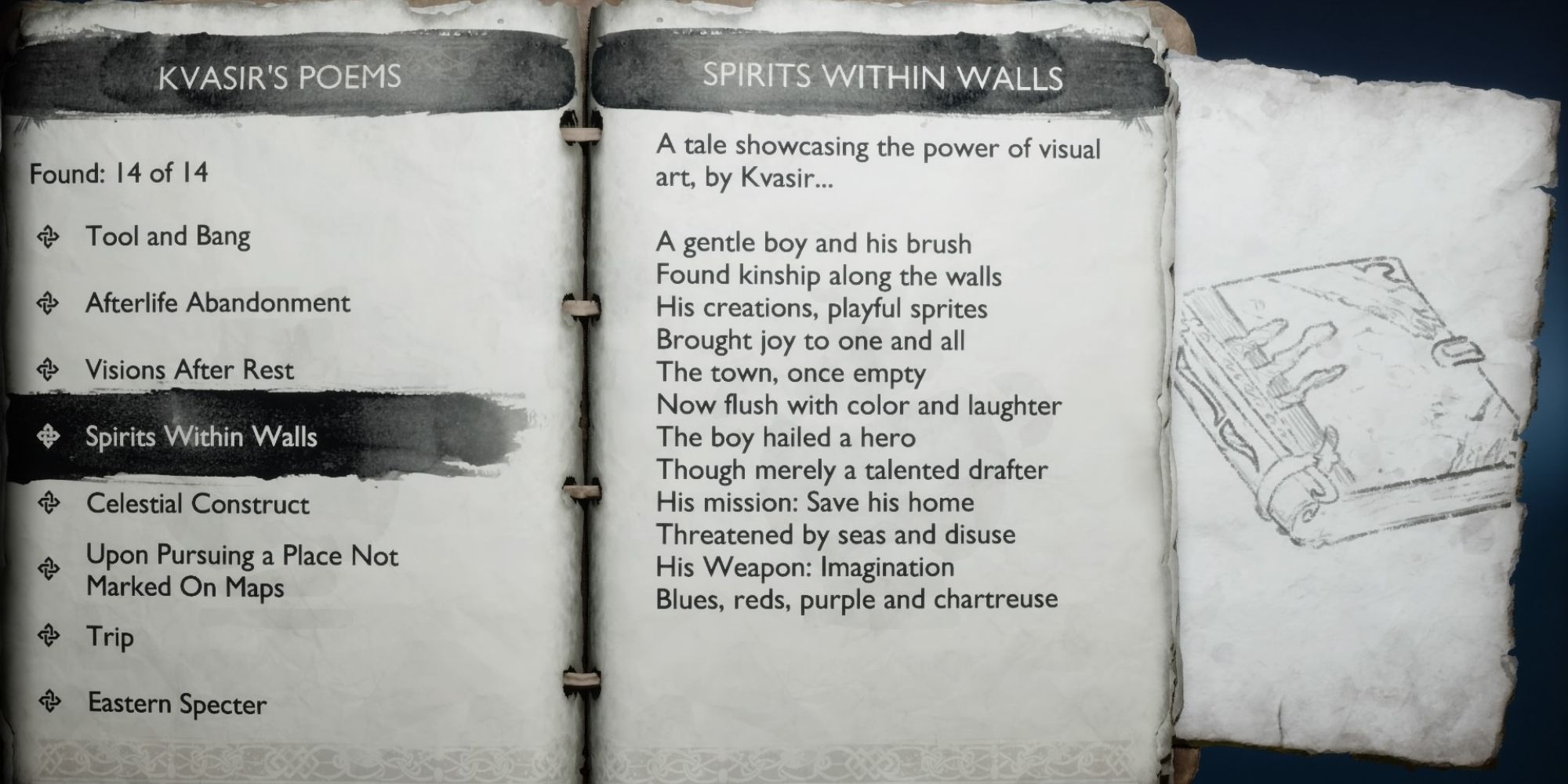 This poem references Concrete Genie. The protagonist is referenced by the gentle boy and his brush, and his graffiti art creations are playful sprites. The poem also references the gameplay and story, talking about how bringing color back to his hometown and bringing his art to life helps him save the town. The book cover sketch is probably the hardest to recognize, as it barely looks like anything. But the actual cover is an array of colors and a few drip marks that often accompanies graffiti. 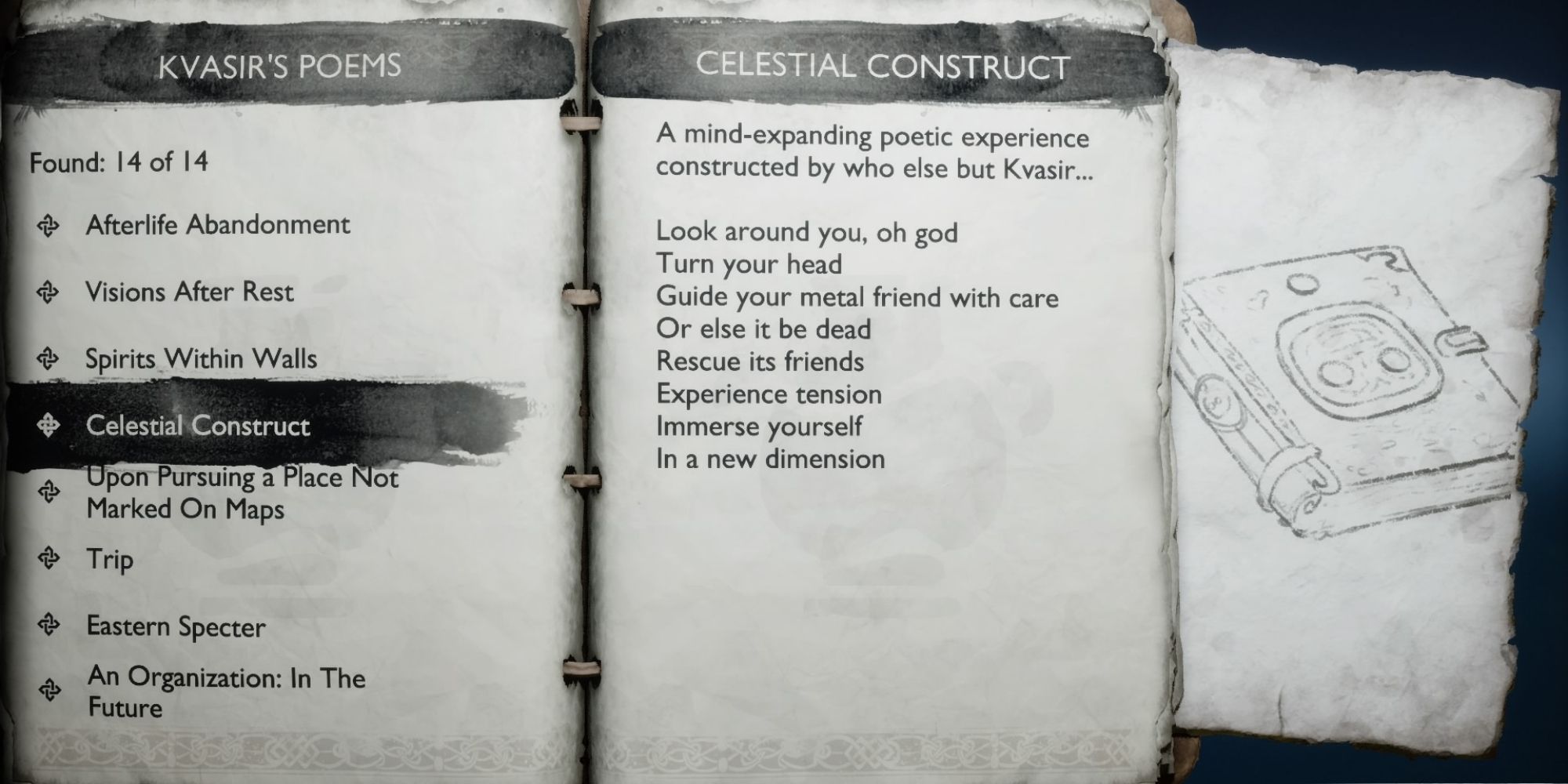 If you’re lucky enough to have a PS5, you might recognize this one as Astro’s Playroom, a free game included with the console. The cover is, quite literally, Astro himself, a clear depiction of his face. There are several minigames within Astro's Playroom, and this focuses on one: Astro Bot Rescue Mission. Coincidentally, this was also a game for the PSVR. Both titles were intended to make something light and easy for players to learn the new technology.

6/14 Upon Pursuing A Place Not Marked On Maps 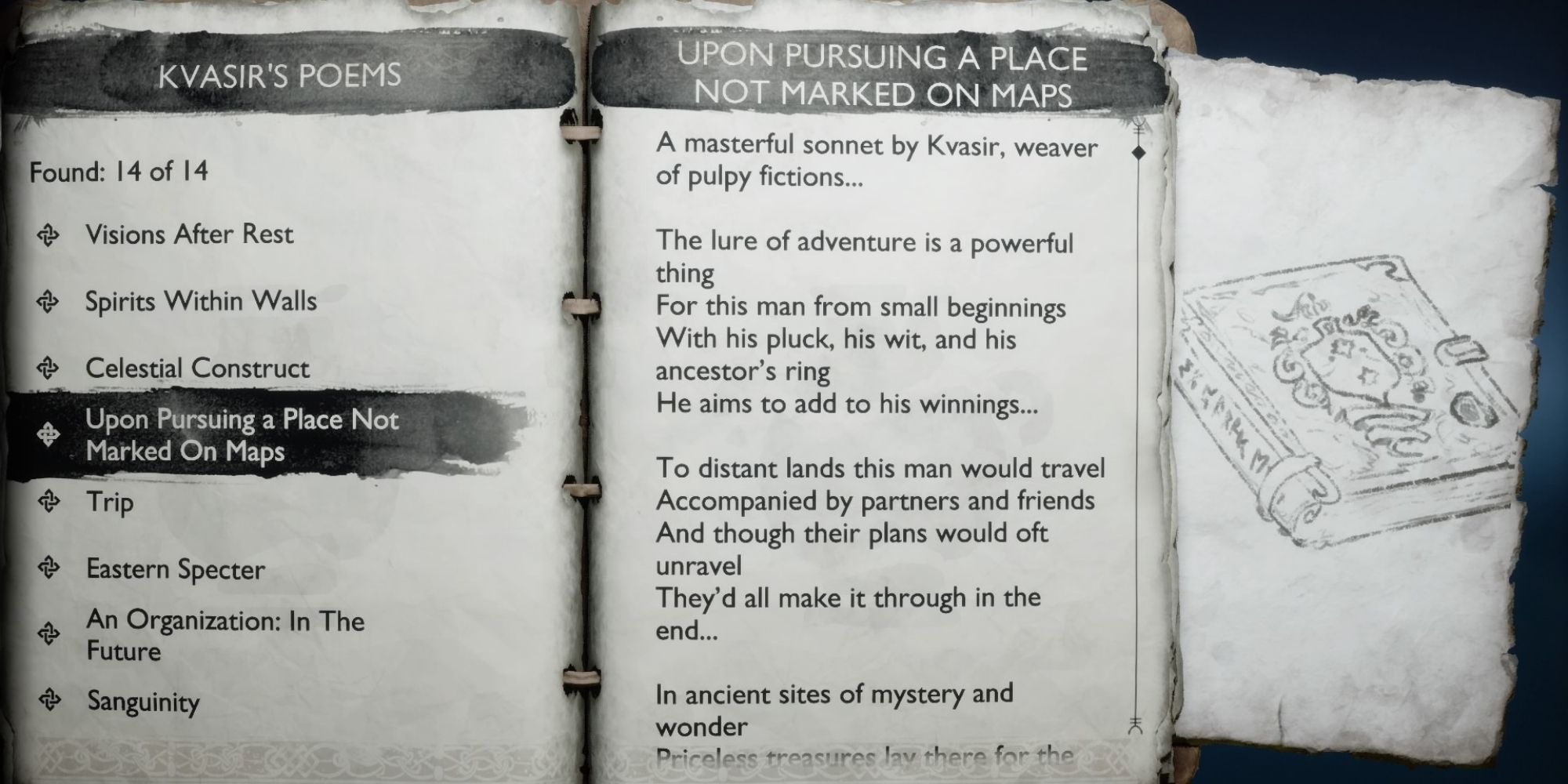 The longest poem in the game is a nod to the Uncharted series. The poem focuses on the treasure hunts Nathan Drake goes on in each game, with the highs and lows of the hunt. It also highlights how destructive Drake tends to be in the process, and the well-known climbing aspects of the games.

Drake’s ring that he wears around his neck is also included, and a phrase that is a part of the inscription on it. The cover isn’t as easy to recognize, but it’s actually the crest on the front of Drake’s journal. 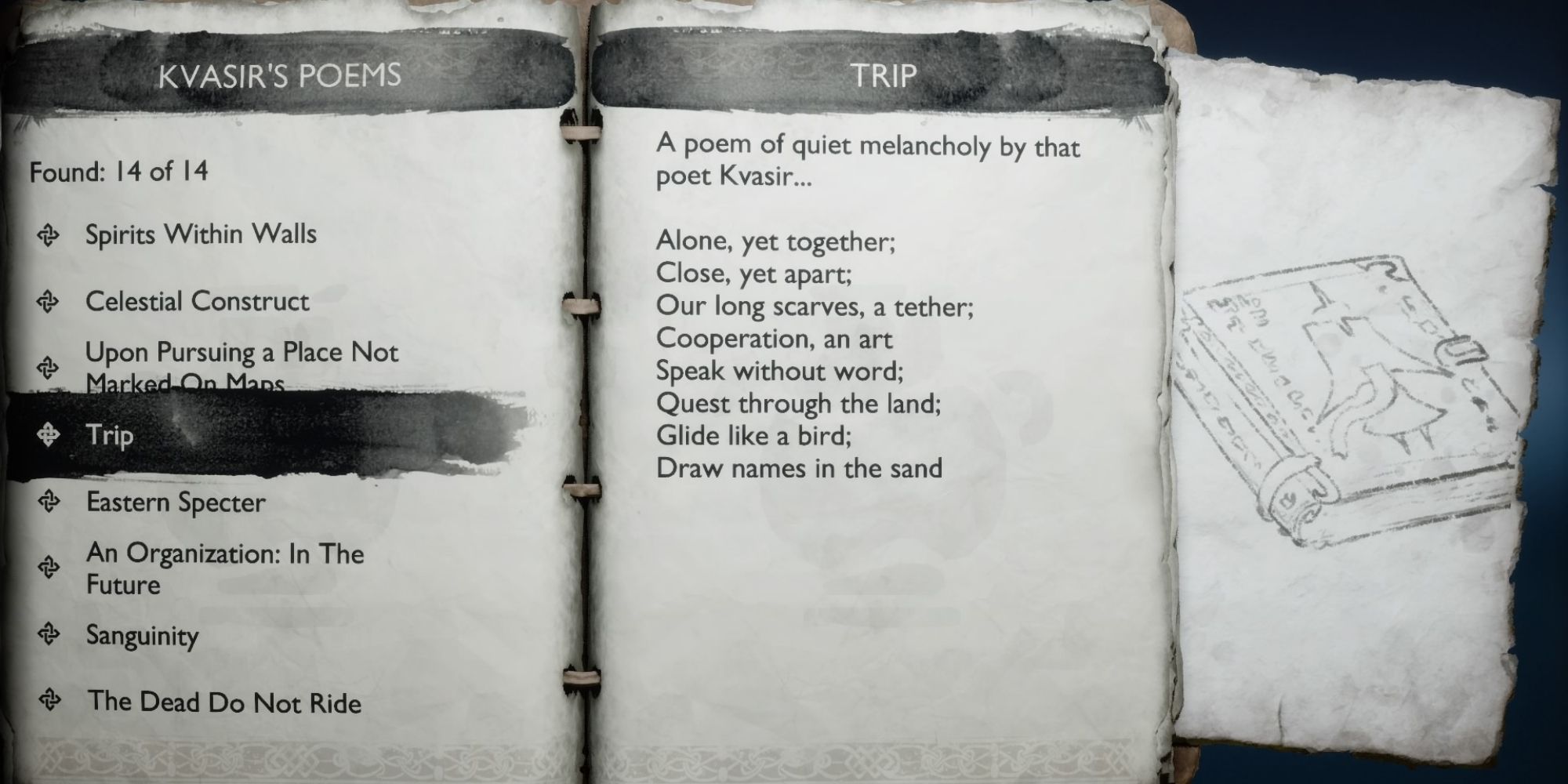 This poem references the game Journey, a unique multiplayer indie game. The cover of the poem is a chime you can find in-game, and coincidentally the only way that players can communicate with each other. The poem not only tries to tell the tale of what the gameplay and story are, but mentions how the game can make each player feel alone in the world yet somehow connected. 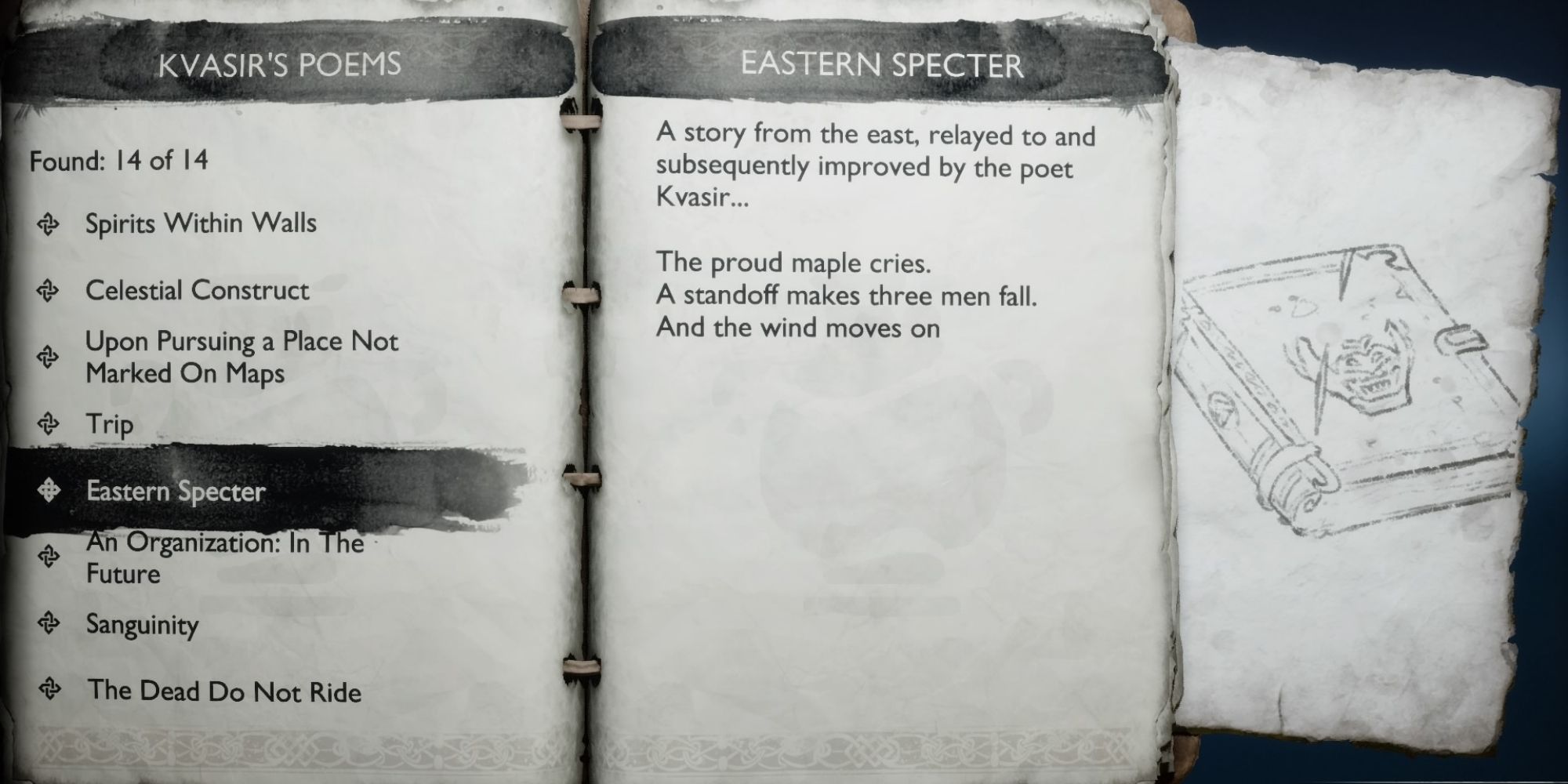 This short haiku is a reference to Ghost of Tsushima. The protagonist of that game, Jin Sakai, also uses haikus throughout, so it’s a fitting choice. The wind is a reference to the use of it as a guide during your adventure. In the second line, the standoff is talking about one of the main gameplay features when faced against groups of enemies. Even the cover is pretty easy to notice, as it’s the Ghost mask Jin wears in the game.

3/14 An Organization: In The Future 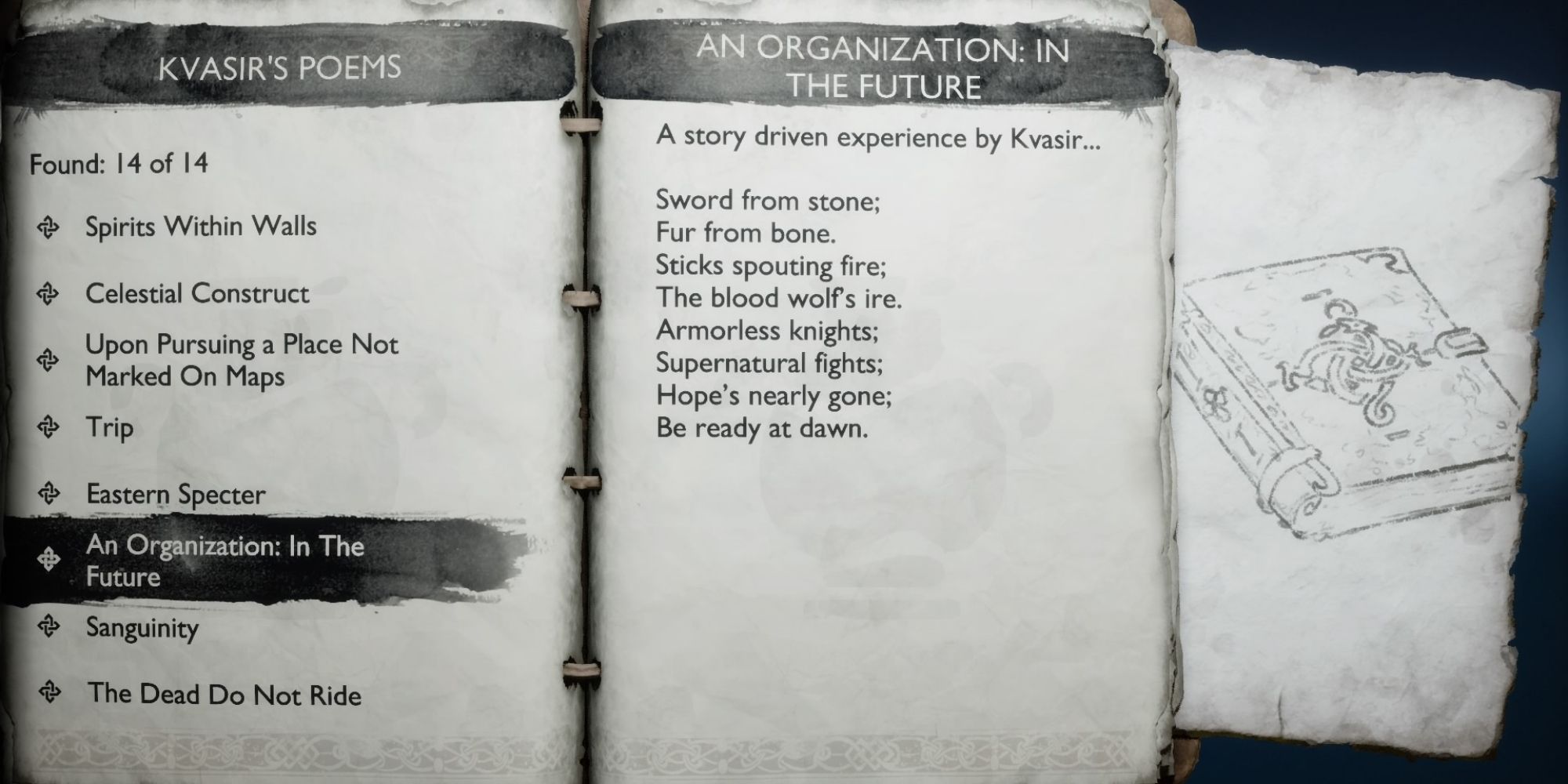 This poem references the lesser-known PlayStation game The Order: 1886. The title references the future because Ragnarok is set perhaps a thousand years before 1886. The game features the legendary Knights of the Round Table, tasked with saving humanity from the supernatural — another reference in the poem. If you’re not sure what the book cover is either, it’s the Order’s symbol, found on the game’s cover image. 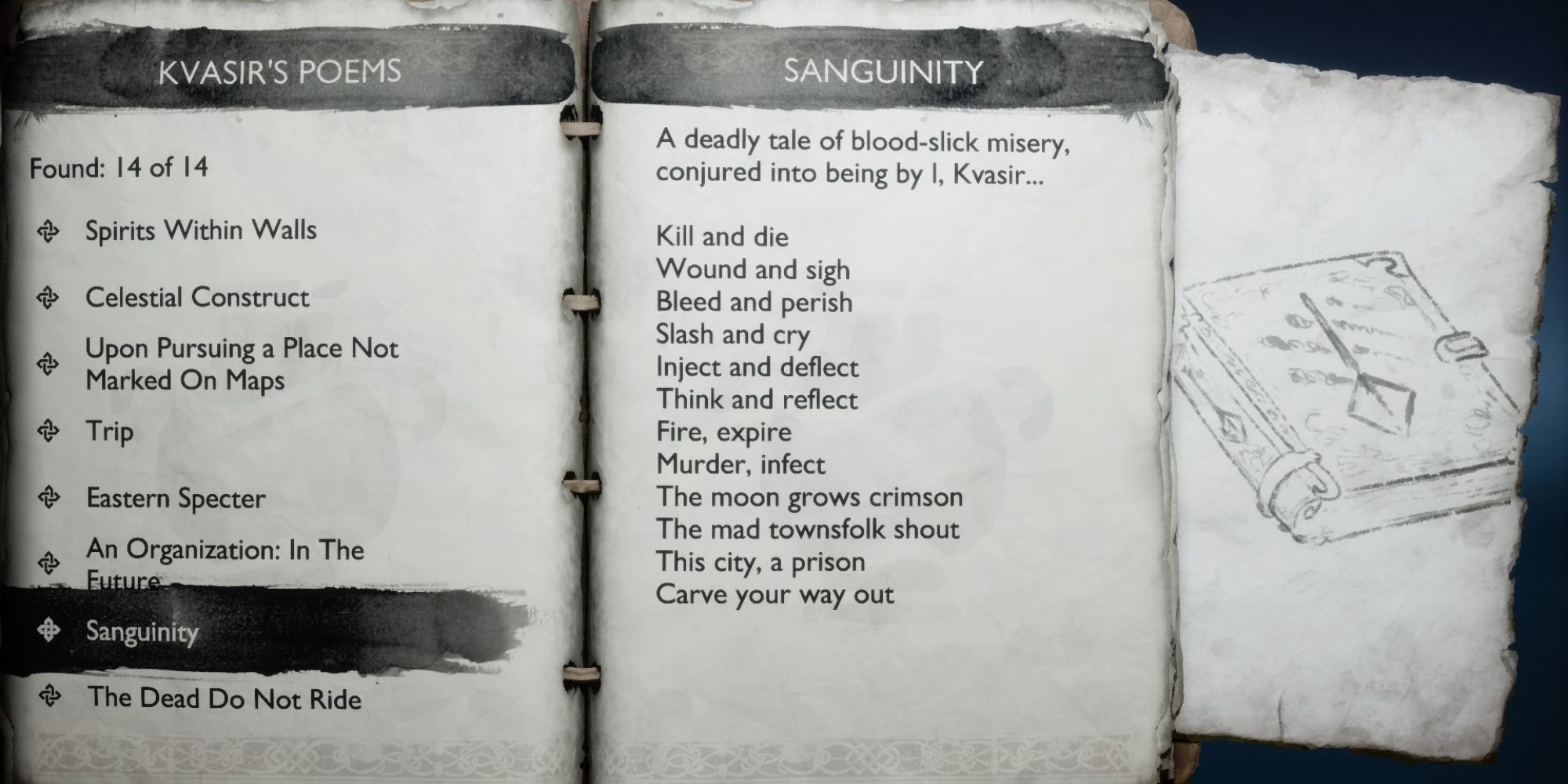 The game referenced here is Bloodborne, with the poem talking about the dark, winding city of Yharnam. Many different aspects of gameplay throughout the game are also touched on, highlighting the different origins players could choose from to customize their gameplay. It also mentions the iconic difficulty, often one of the most recognizable traits of FromSoftware games. The cover is the hunter’s mark from the game, too. 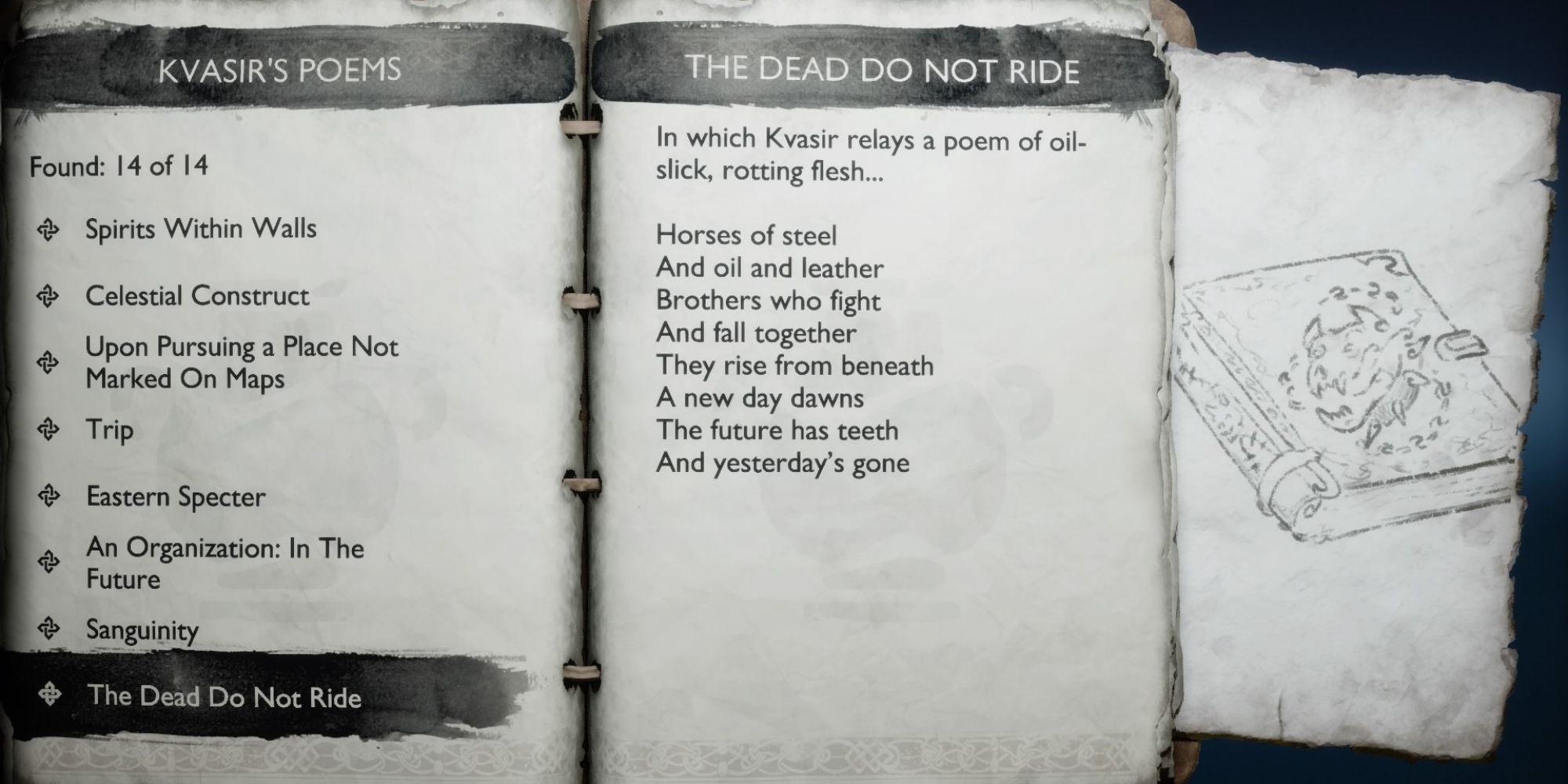 The zombie game Days Gone is the source material for this poem. The first two lines reference the game's motorcycles and the Mongrel’s Motorcycle Club, and the cover is the symbol of the club, too. The protagonist, Deacon St. John, was a proud member of this club, and it plays an important role in the story. The rest of the poem talks about brothers fighting and dying together, which was another key theme in the game’s story.