Continuing our journey with Atreus, God of War Ragnarok will now place us in the endless inferno that is Muspelheim. This is to say that The Inferno quest is appropriately named. Atreus will also be accompanied by an unexpected ally. An uneasy one.

This is another shorter section, and it is, once again, pretty combat-heavy. However, while this area isn't as open to exploration as some others, there are still treasures to be found along the way. There are also a handful of encounters that can be a touch tricky. We'll take you through all of this and make sure you exit the other side comfortably. 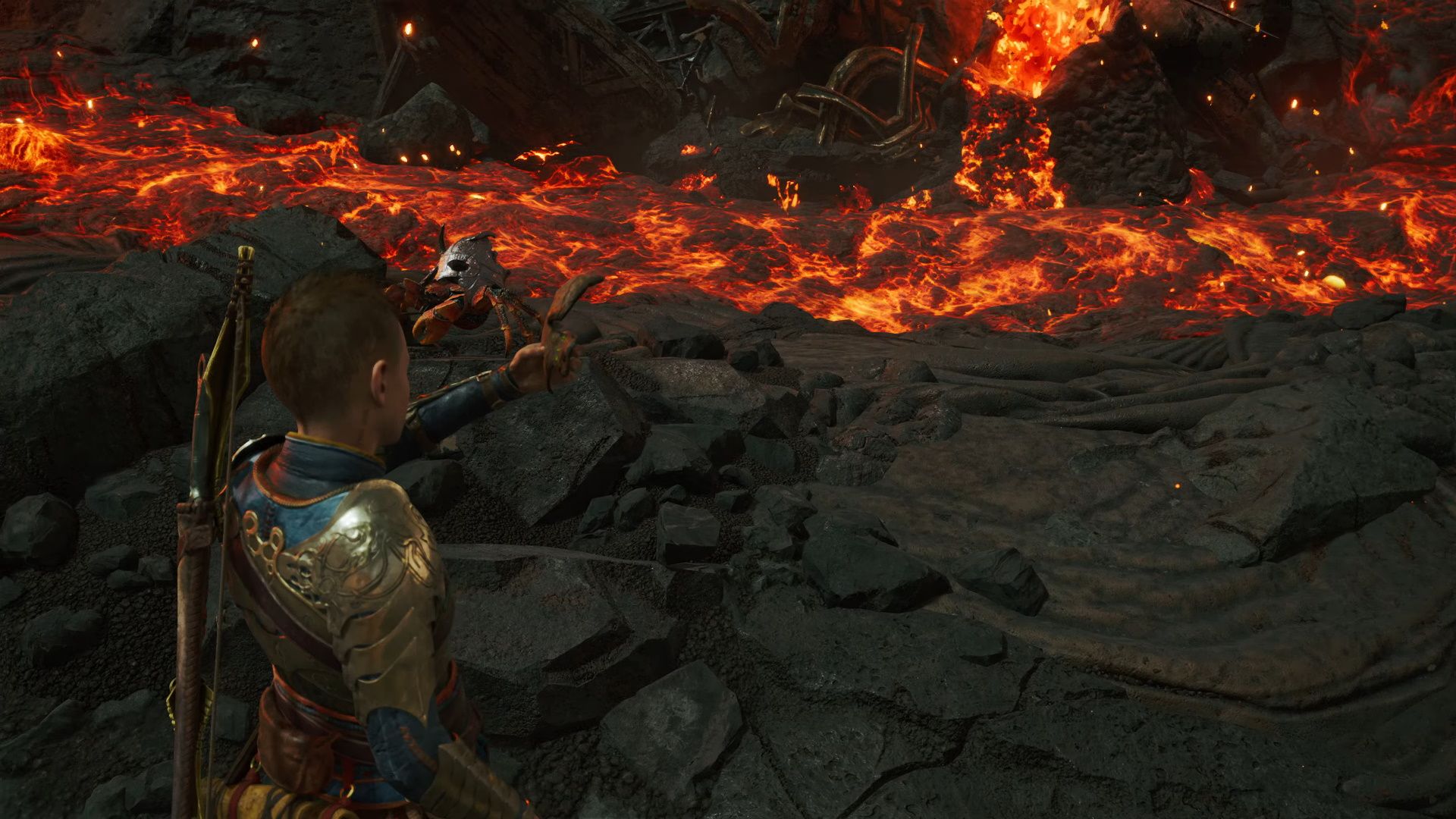 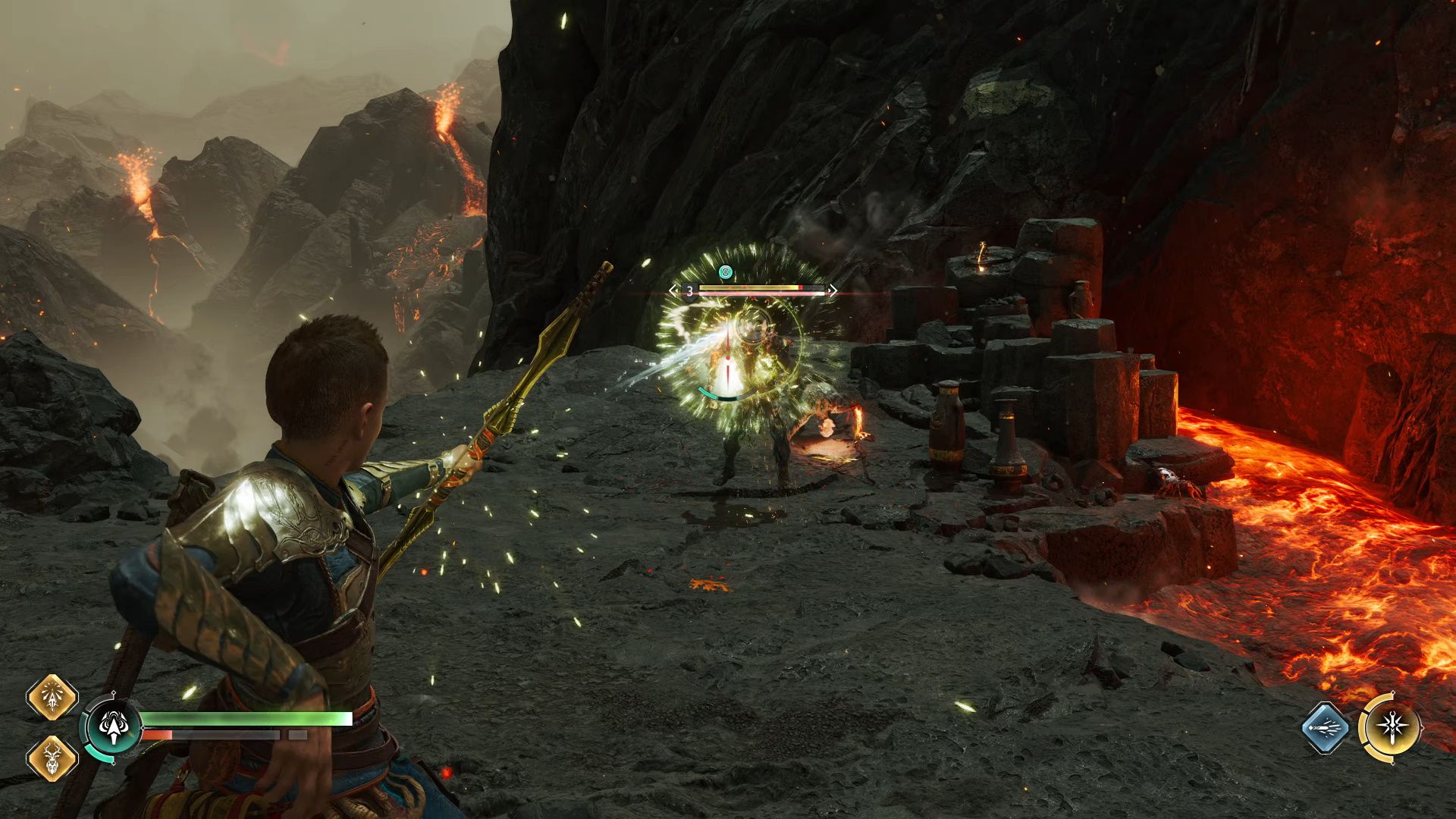 The big novelty mechanic here is the mask. You are going to use it to guide you to where you need to go. Pull it out and follow the vibrations. If you are facing the river of lava, you will need to go to your left. Once you do so, Thor will smash through a rock wall, and you will enter into the Burning Cliffs proper. Here you will face off against your first set of enemies. Unclimactically, it is just a bunch of Draugrs. Take out your mask again once you clear them out. Thor will grab you, and take you to your next section.

You don't get to give Thor commands like you would a true companion character. However, you do have Ingrid, a sentient sword backing you up now. And you can give it companion commands with the square button. So, make sure to make good use of Ingrid's slashing attacks. 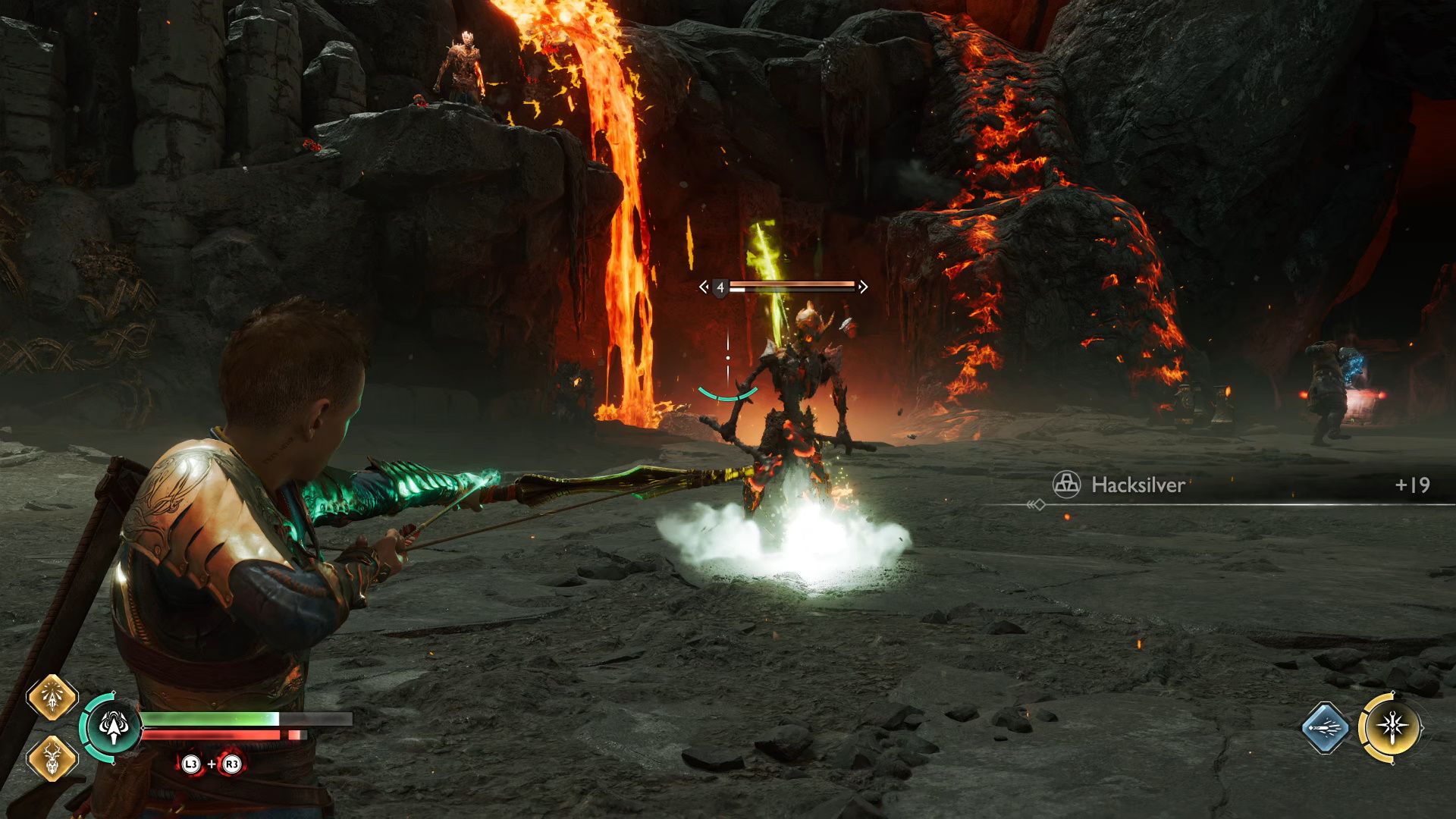 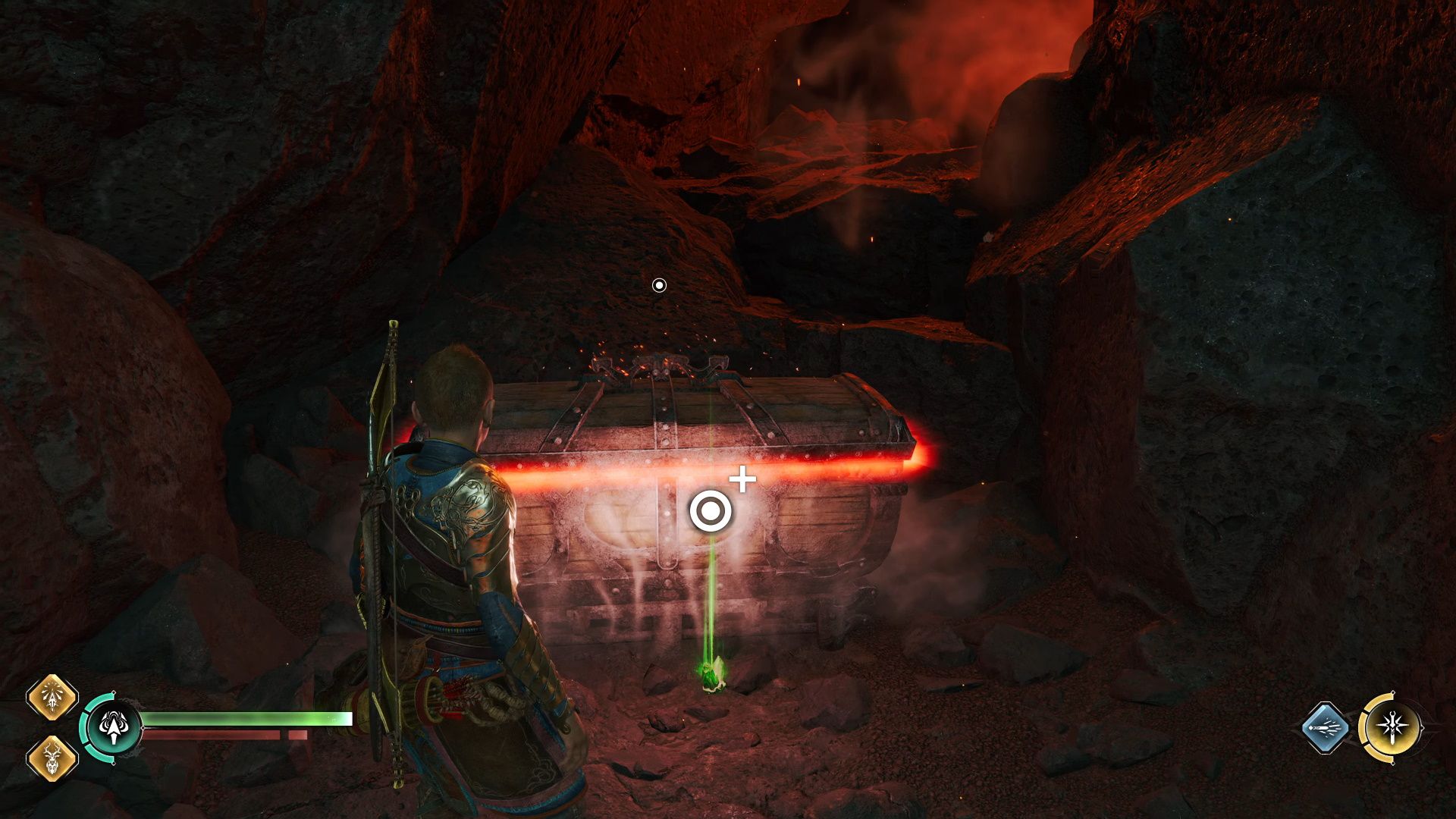 Once you land on the surface above, you will fight another set of Draugrs. There isn't anything remarkable about this batch, but watch out for the archer positioned above. There is a red chest here in the back, you can also crawl through a hole to loot another Hacksilver chest. Once you are done, take out the mask, and walk toward the mess of yellow-painted stones lining the left wall.

In this next area, you will be able to see a Nornir rune on your left. You can't do anything with it, so don't waste your time trying. This will be for later. 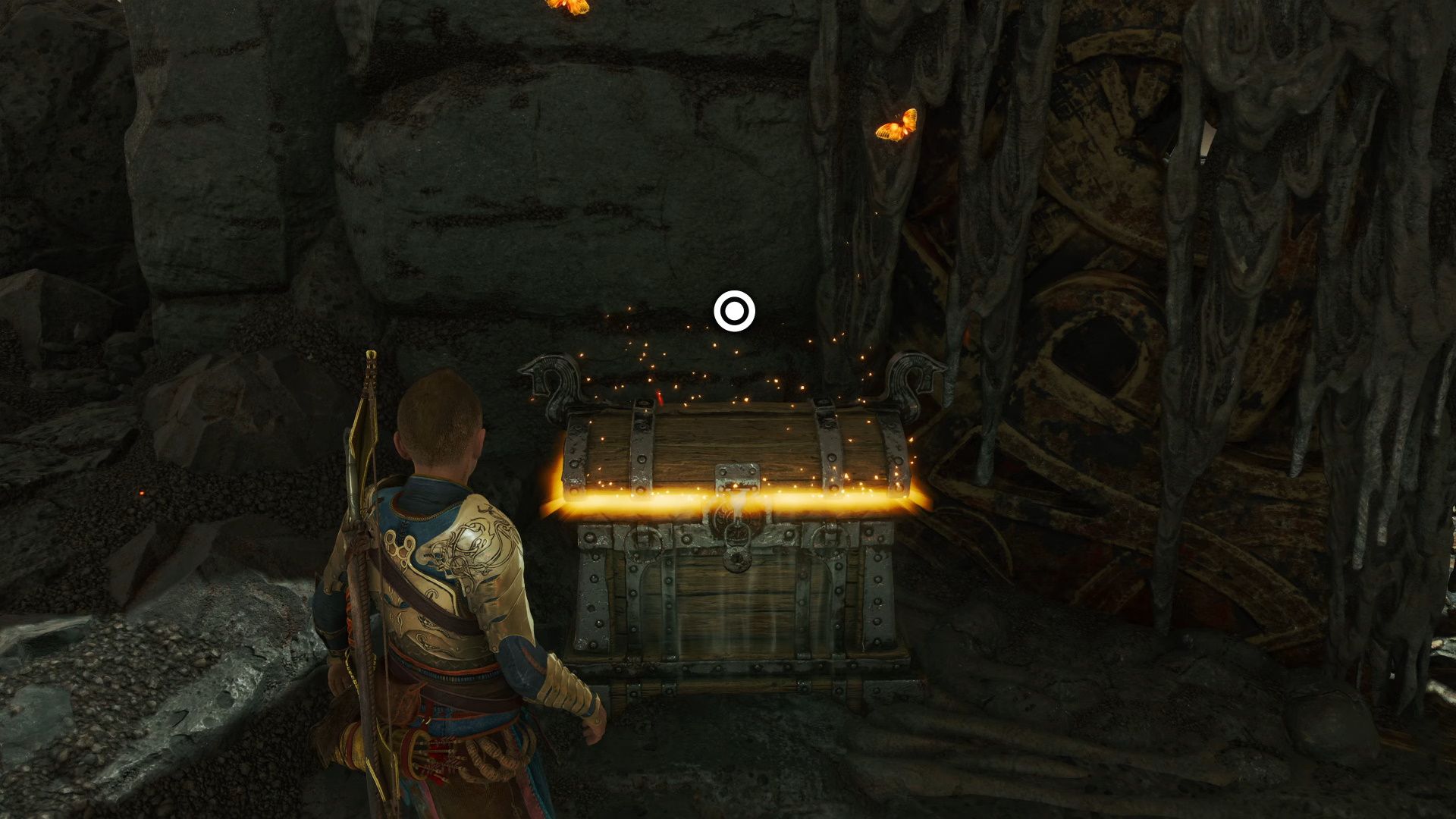 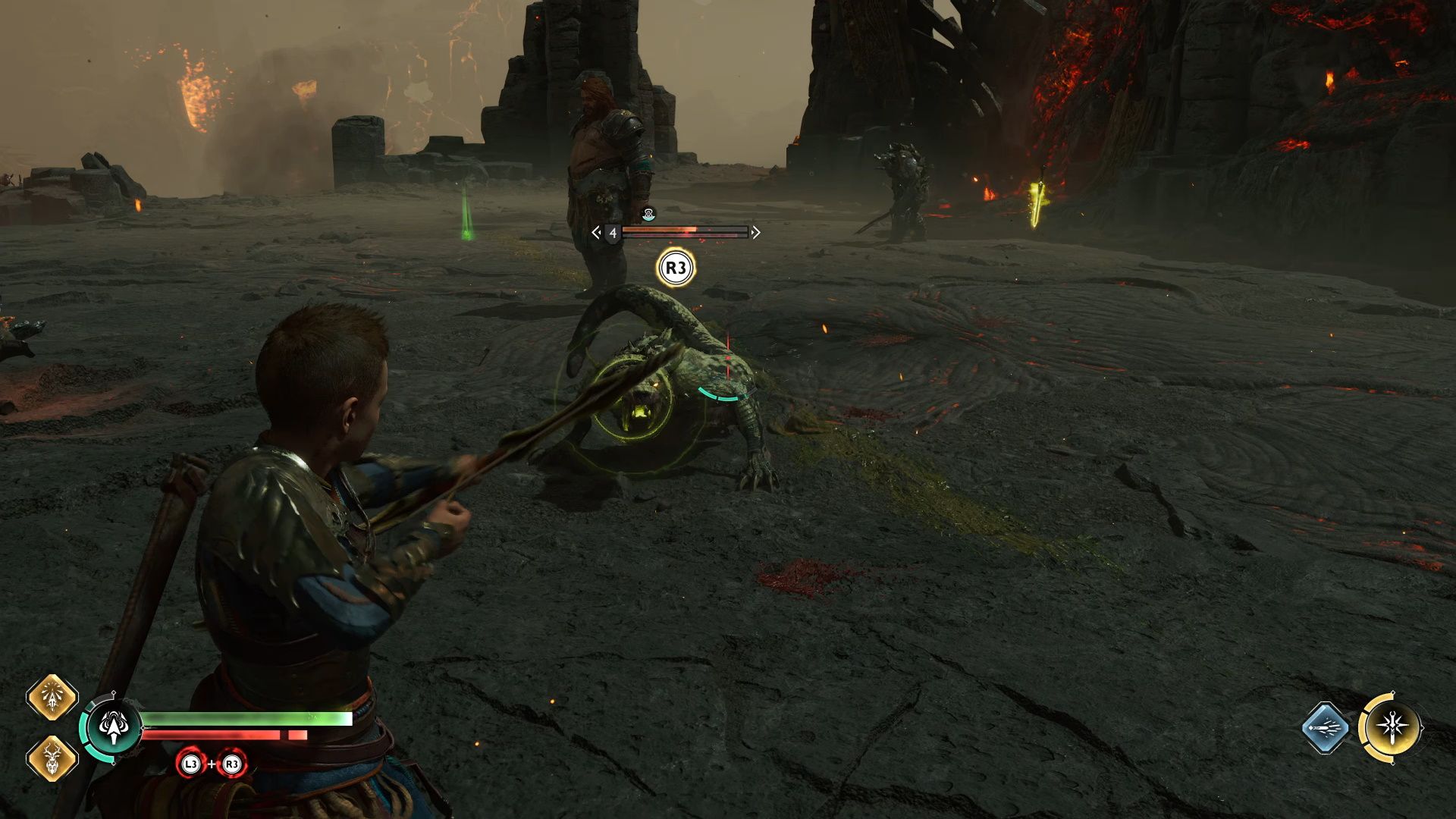 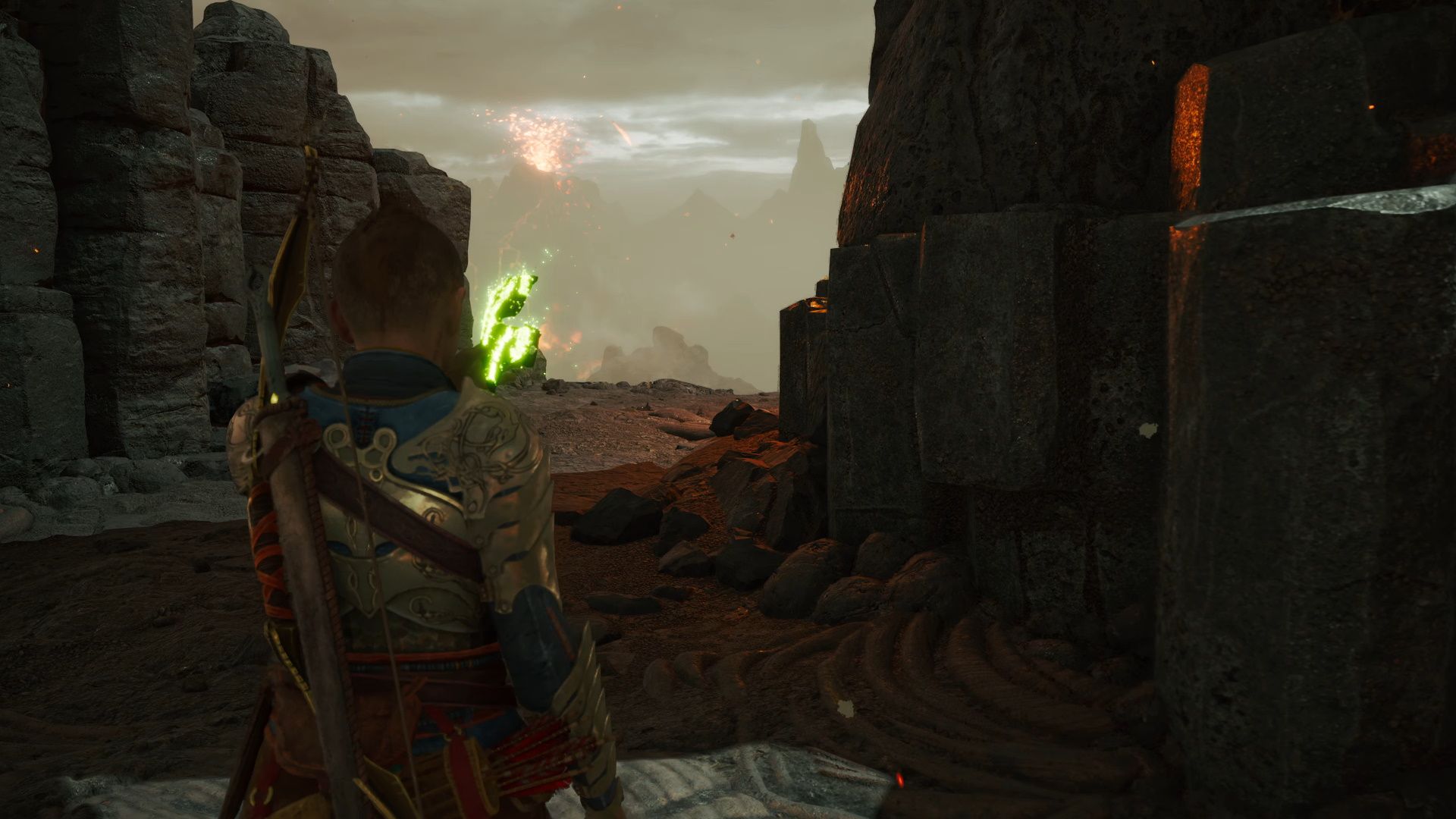 Now, travel to your left, once you encounter a geyser of lava, shuffle along the ledge. You will now engage another set of enemies. While you will still be facing off against Draugrs, some Tatzelwurms will join them this time. You will probably want to take care of them first; otherwise, they will be spitting at you from the distance the entire battle. Once you clear them out, take out your mask and follow it to the next spot. This will be to the left of the giant gate, right up against the ledge. 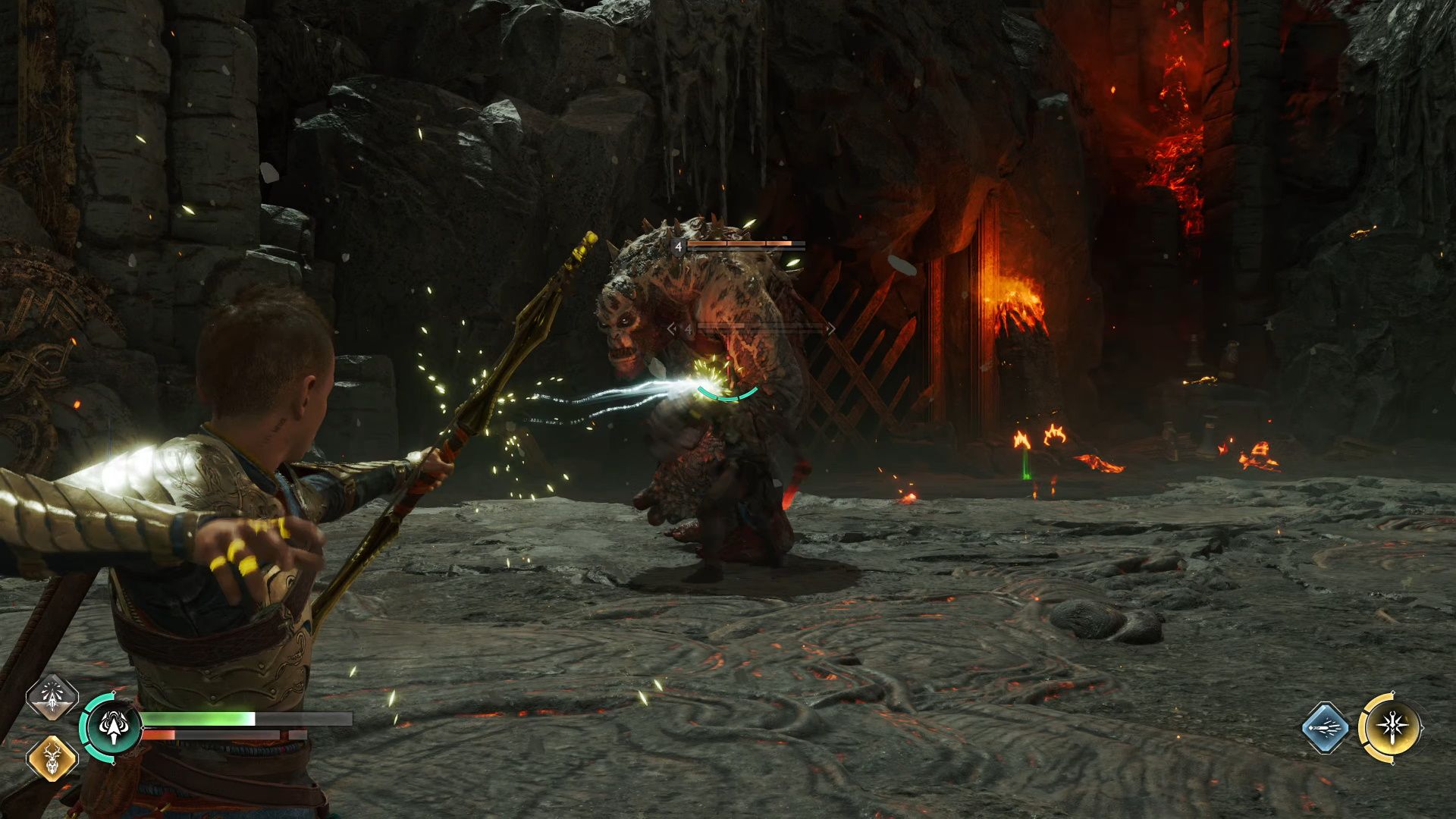 You will now be taken to—you guessed it—another platform where you will fight a bunch of Draugrs. However, this one does ramp up the difficulty considerably. You will have to contend with those nimble axe-wielding Draugrs, as well a pair of Ogres. While the Ogres are obviously quite capable of dealing serious damage, they are also slow. So, we think you should probably take out the ace-wielding Draugrs first, then take out the Ogres second. Atreus is nimble enough that he will be able to keep his distance from the Ogre easily, you will just need to make sure to avoid the boulders they throw. Beyond that, just keep landing headshots. 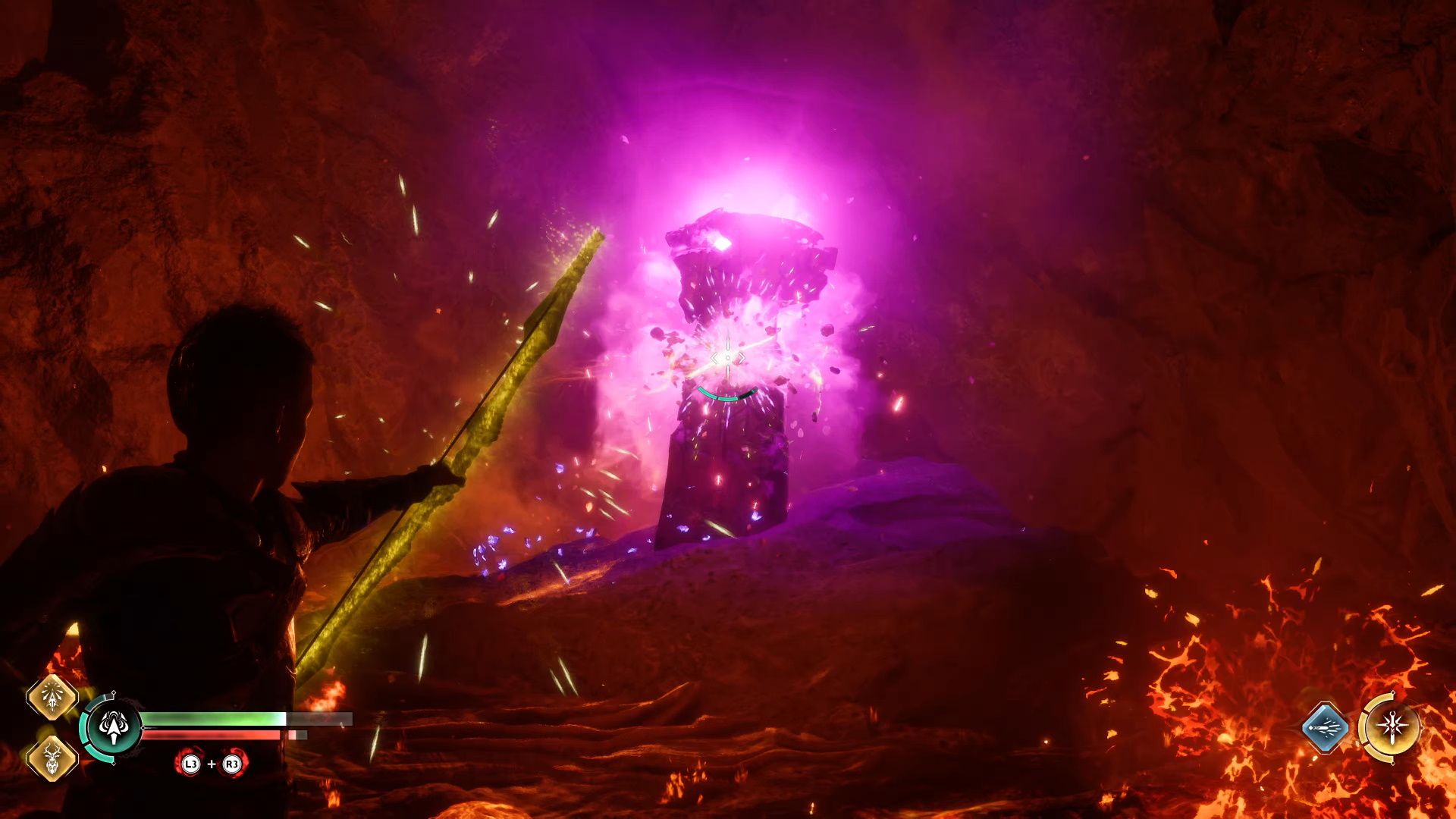 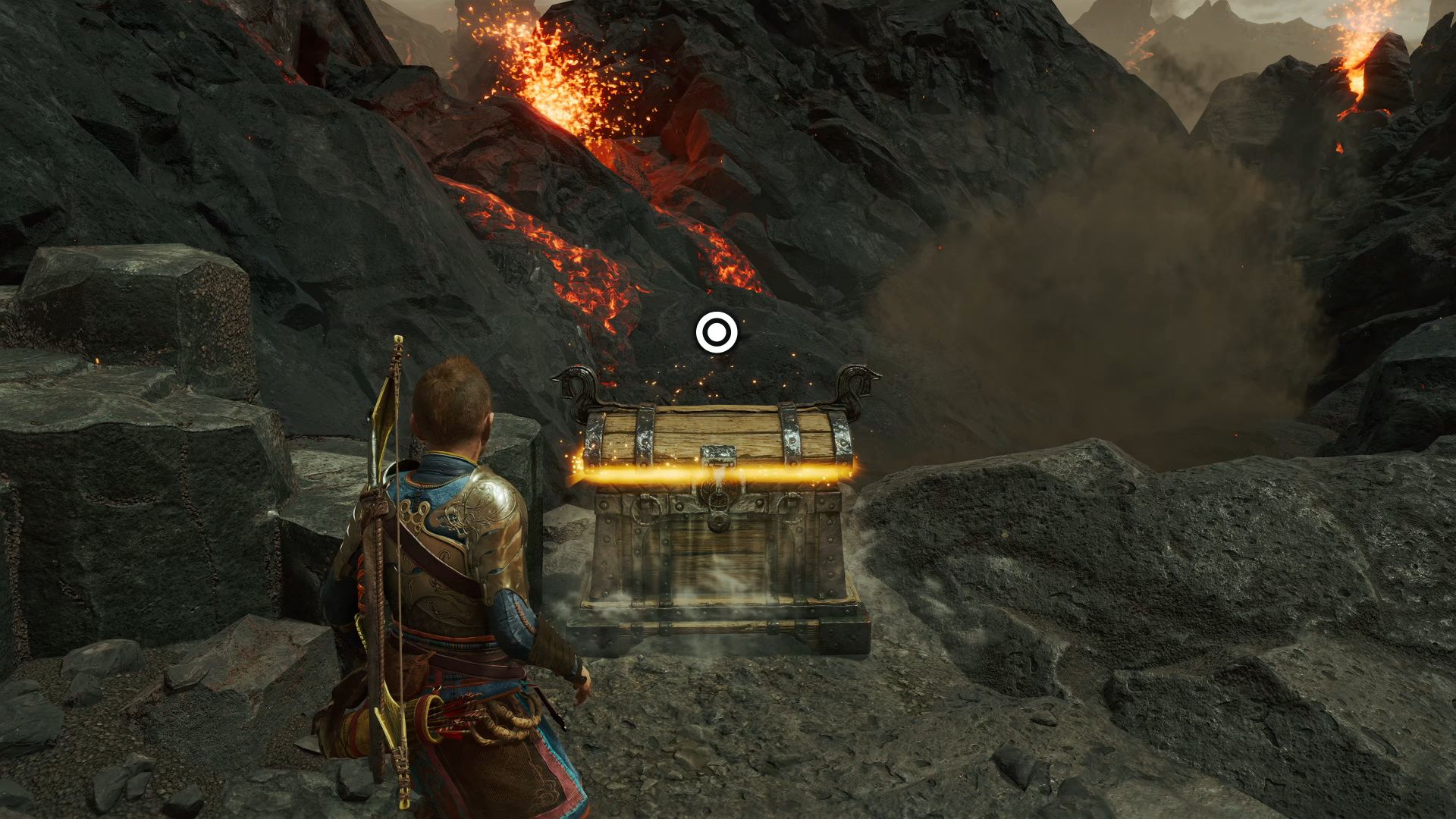 Now, once you clear out all the baddies, Thor will leave you to engage in the Muspelheim Challenges. While he is gone, crawl through the nearby hole in the wall, then climb up the wall to your left, and grab the Hacksilver pouches hidden up above. Now, climb down and follow the path forward. You will encounter a number of Wisps. Shoot them with runic arrows, and finish them off with melee attacks. Then. head into the nearby cave. There is one of those giant stone tablets that is generating Wisps. You will need to destroy it with your standard arrows. Once you do so, collect the nearby Hacksilver, then leave the cave and loot the chest. 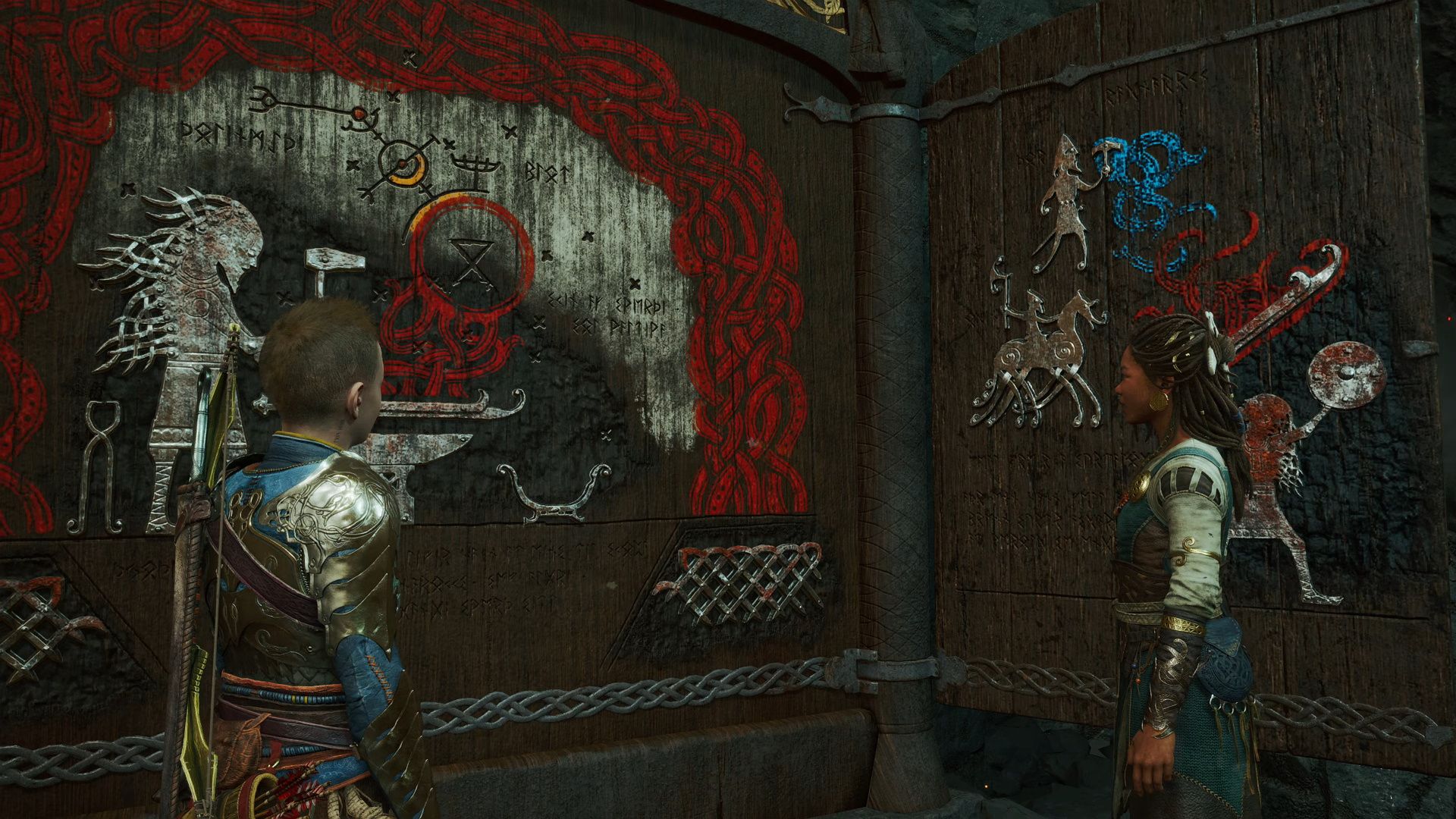 Now, you will engage in a brief cutscene and catch up with Angrboda. After that finishes, head back to Thor. You will engage in one final battle. This time you will fight Tatzelwurms, Nightmares, and some beefy, but slow, Draugrs. There will also be a few projectile tossing Draugr units to fill out their ranks. Thor will not assist you during this encounter. Thankfully, the arena is extremely large, which will give the ever-mobile Atreus a lot of space to work with. 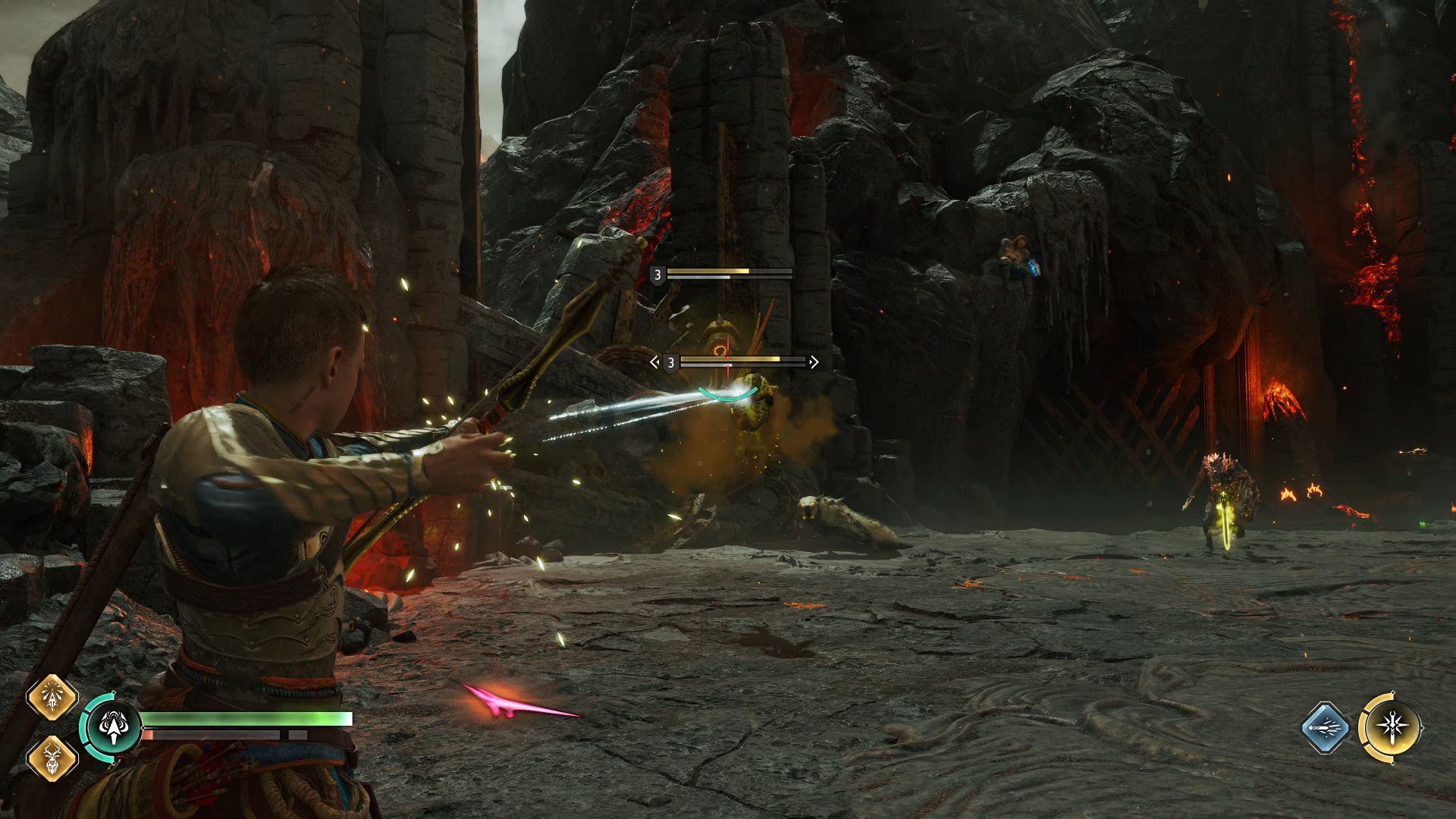 Start with the Draugrs that toss projectiles, as they die quickly, and can be obnoxious. Then take out the Nightmares, as if they ambush you, they can deal a tremendous amount of damage with explosion attack. Then, kill the Tatzelwurms, as their poison spit projectile can be an annoyance. Finally, take out the Heavy Draugr. It won't be much of a threat, as it is basically impossible for it to catch up to Atreus. Just dodge away and land headshots. 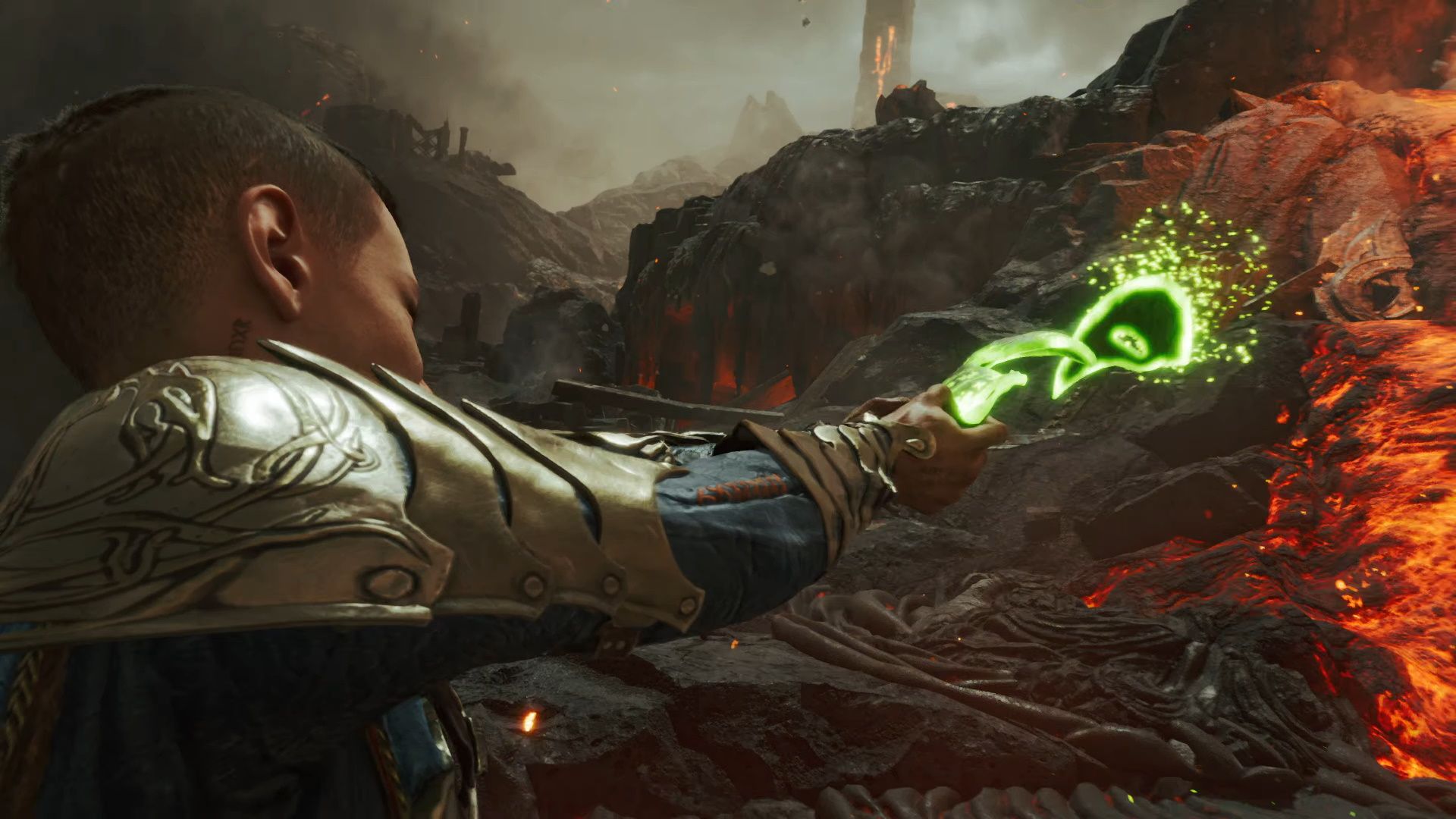 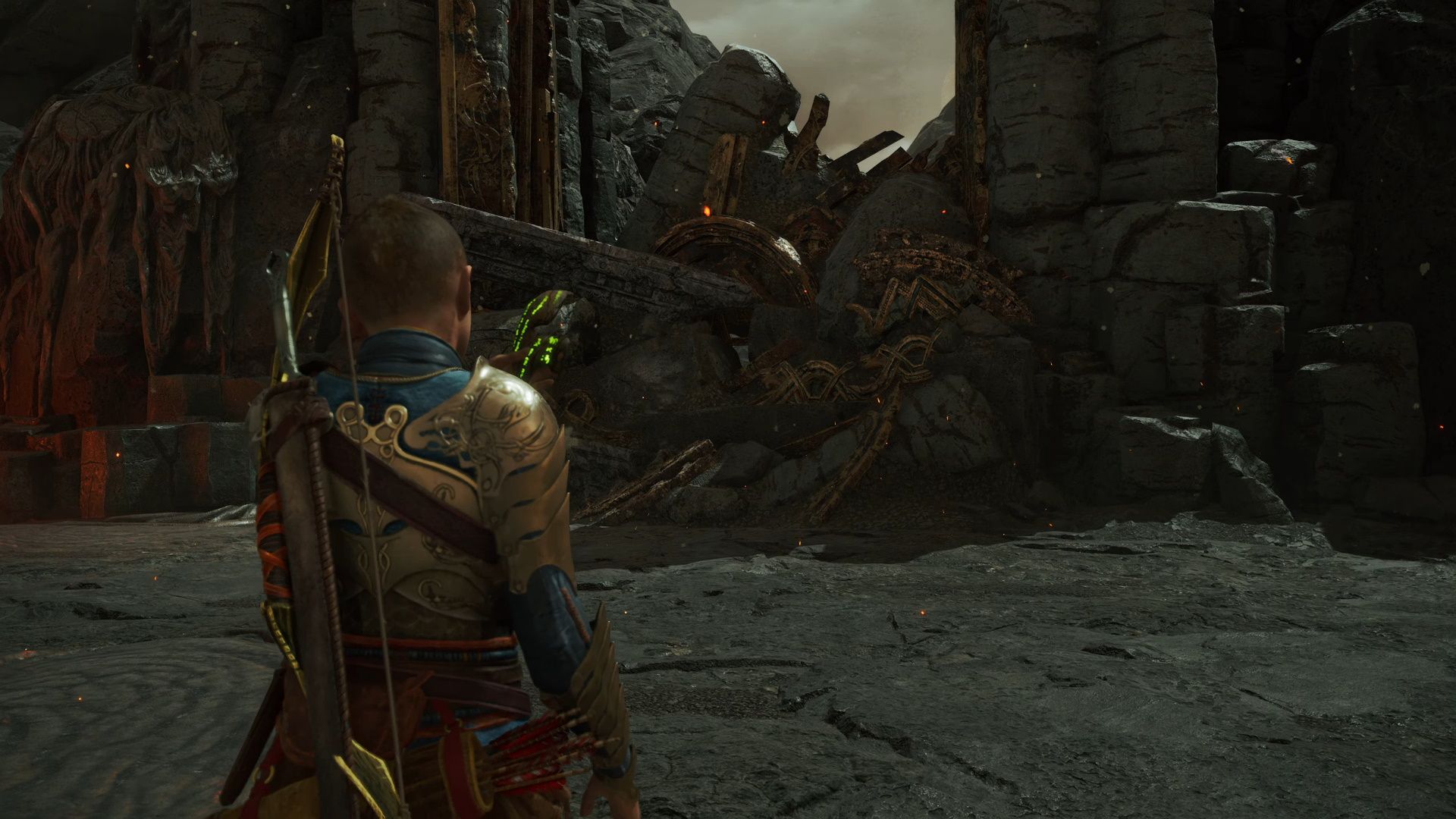 Next, pull out the mask and head for the giant gateway that is blocked by debris. Thor will do his thing and open the path for you. Just head right to the end of this path and pull out your mask. You will now view a short cutscene before completing your mission and leaving Muspelheim. 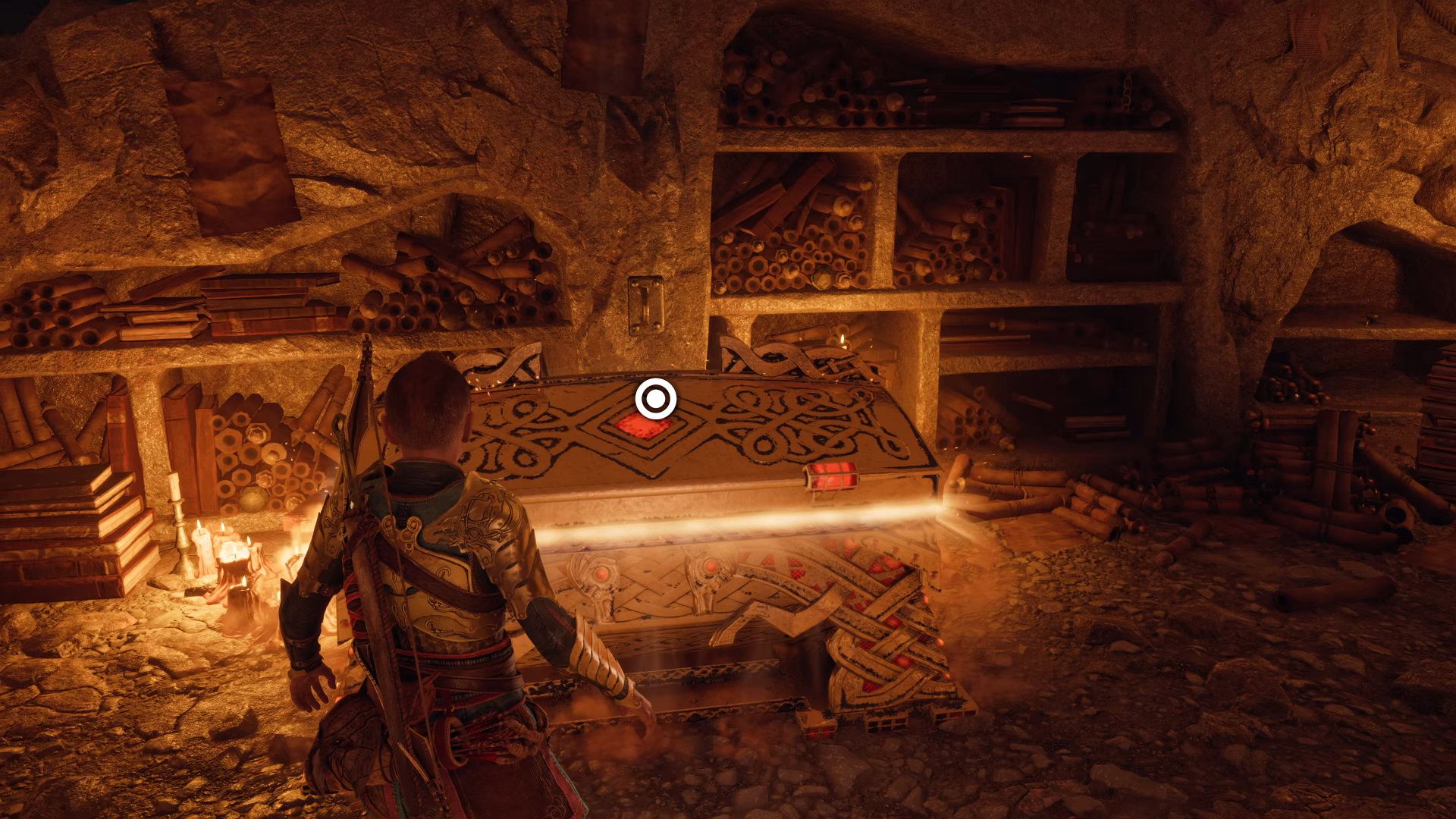 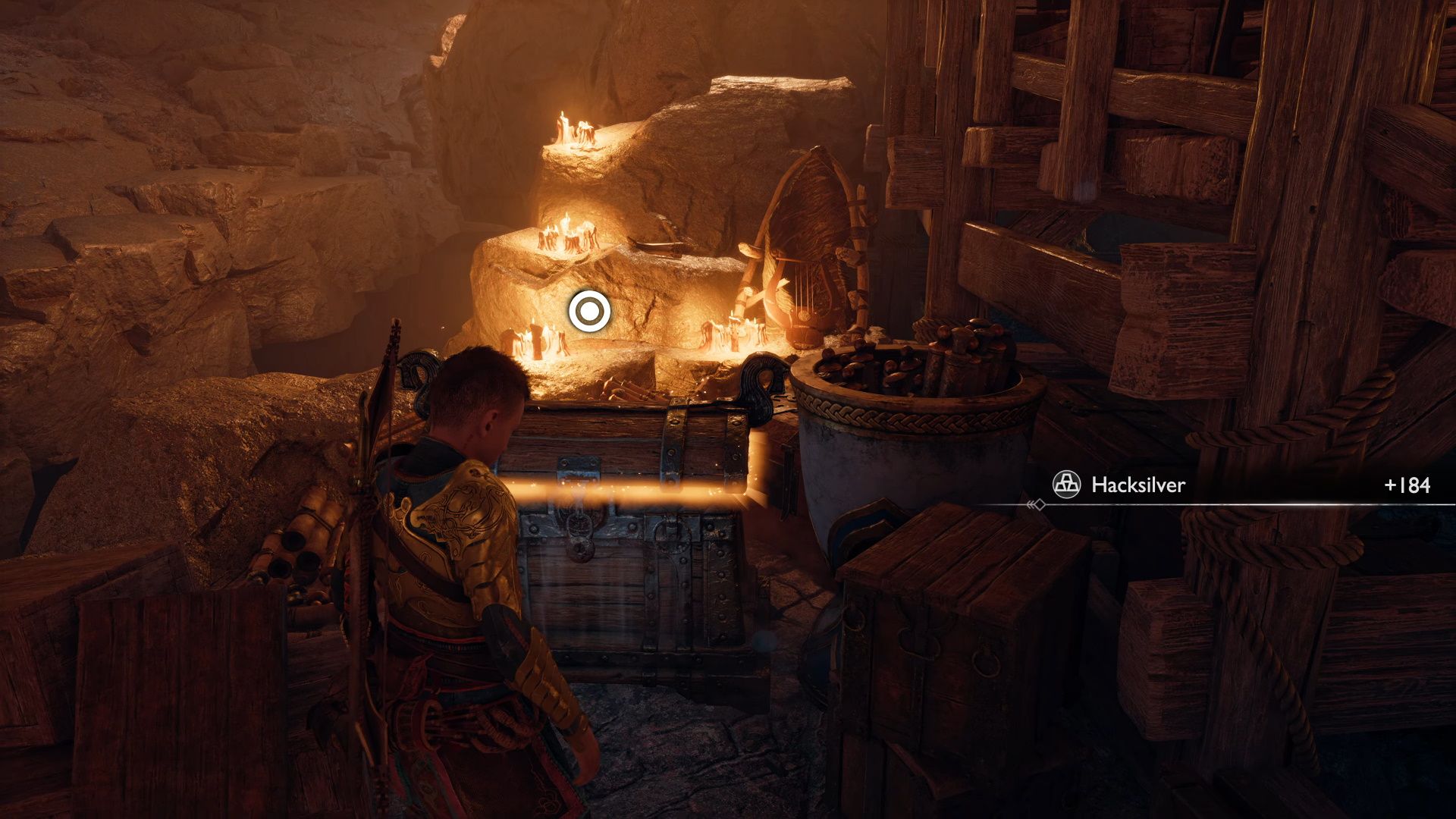 Now, having found the other half of the mask, you are going to return to Asgard. Everything will be narrative from here on out. However, you will have an opportunity to collect some more treasures. After the cutscene with Odin plays out, there will be a chest to the left of the stairs, and a Legendary Chest along the back wall. There are also some Hacksilver pouches lying around. Once you have cleared out the cellar, climb the stairs and enter Odin's office. To your left will be another treasure chest, there will also be a Hacksilver pouch in here. Now, leave Odin's office. You have collected all the treasures available to you here. 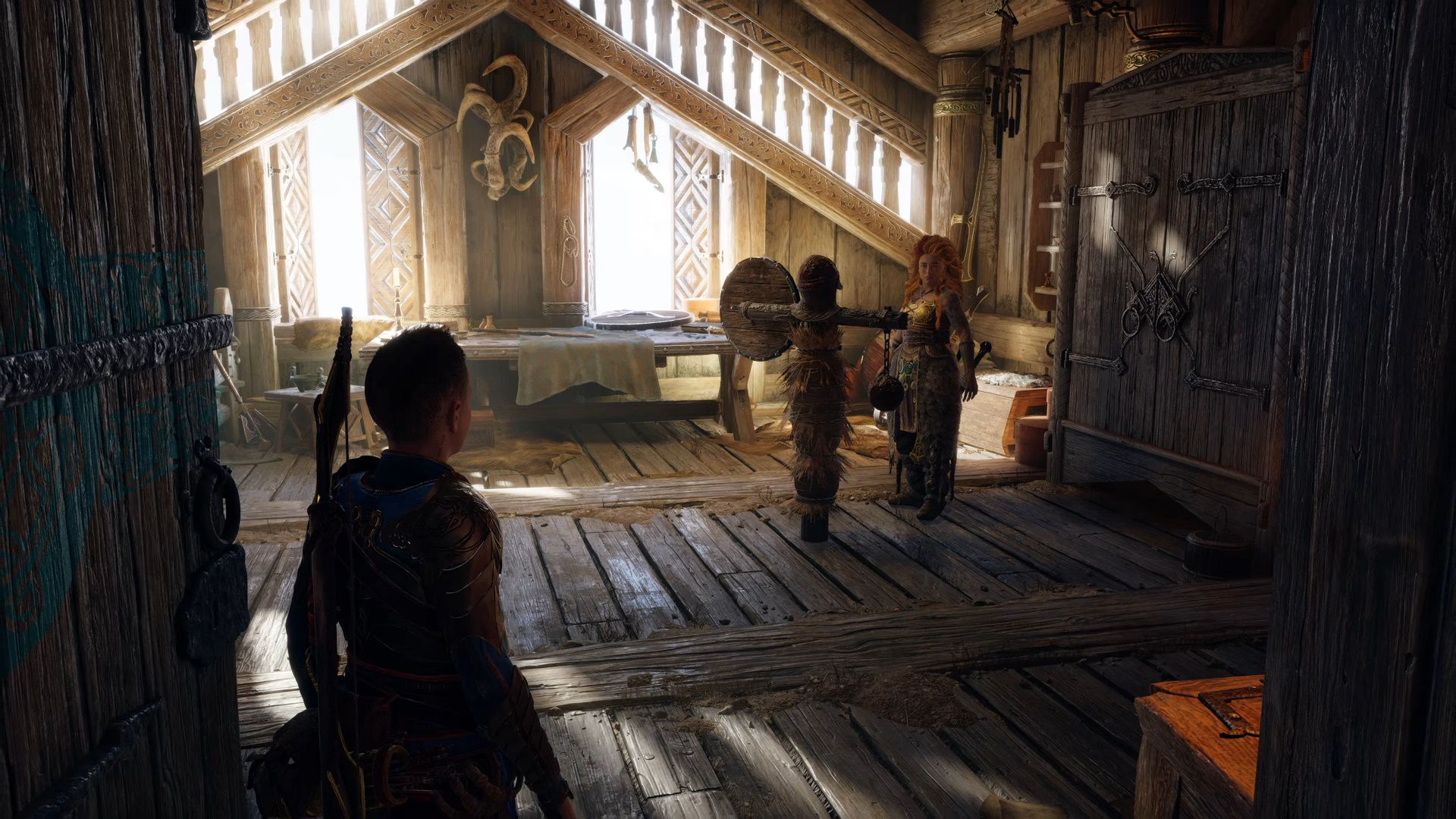 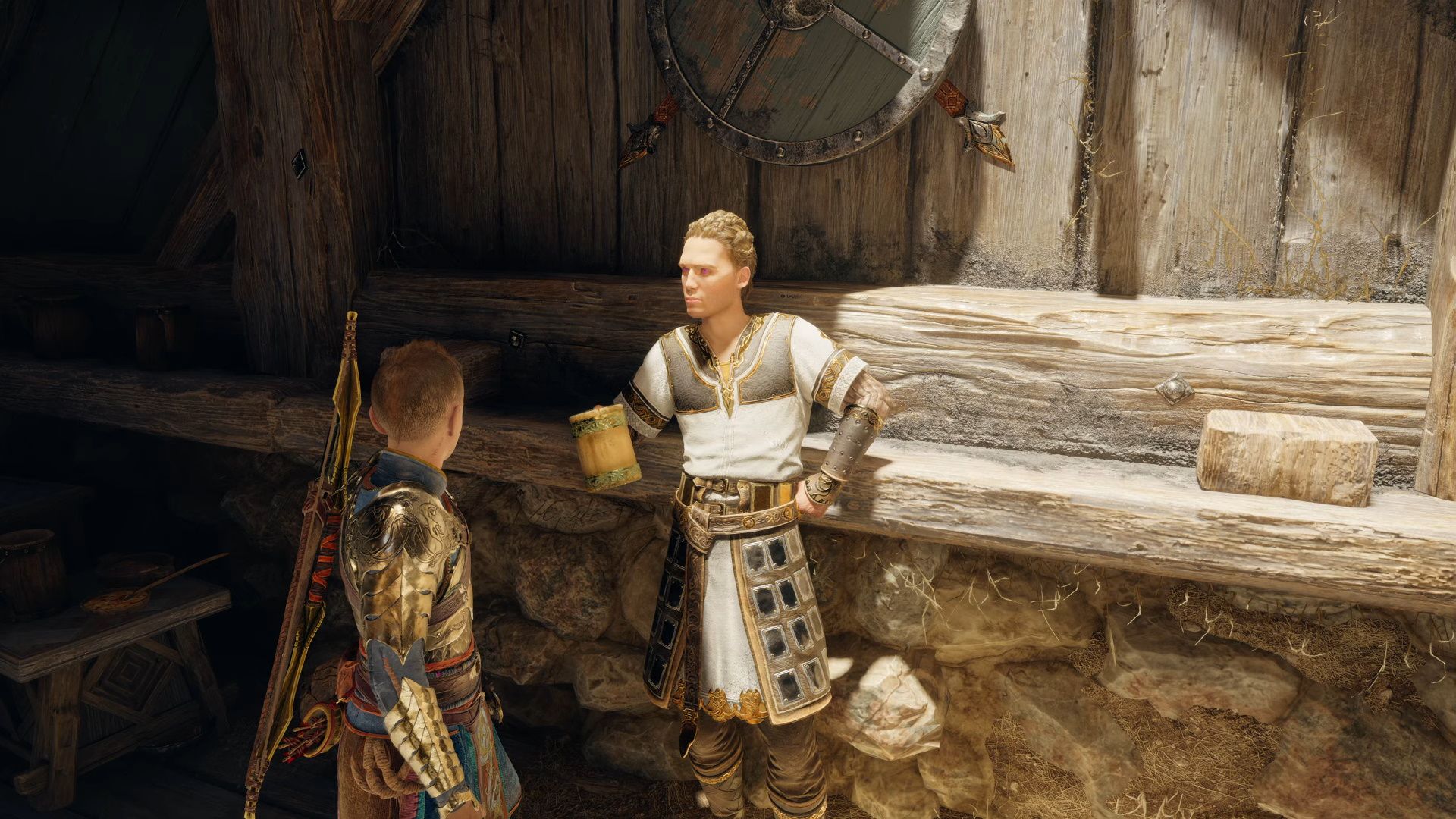 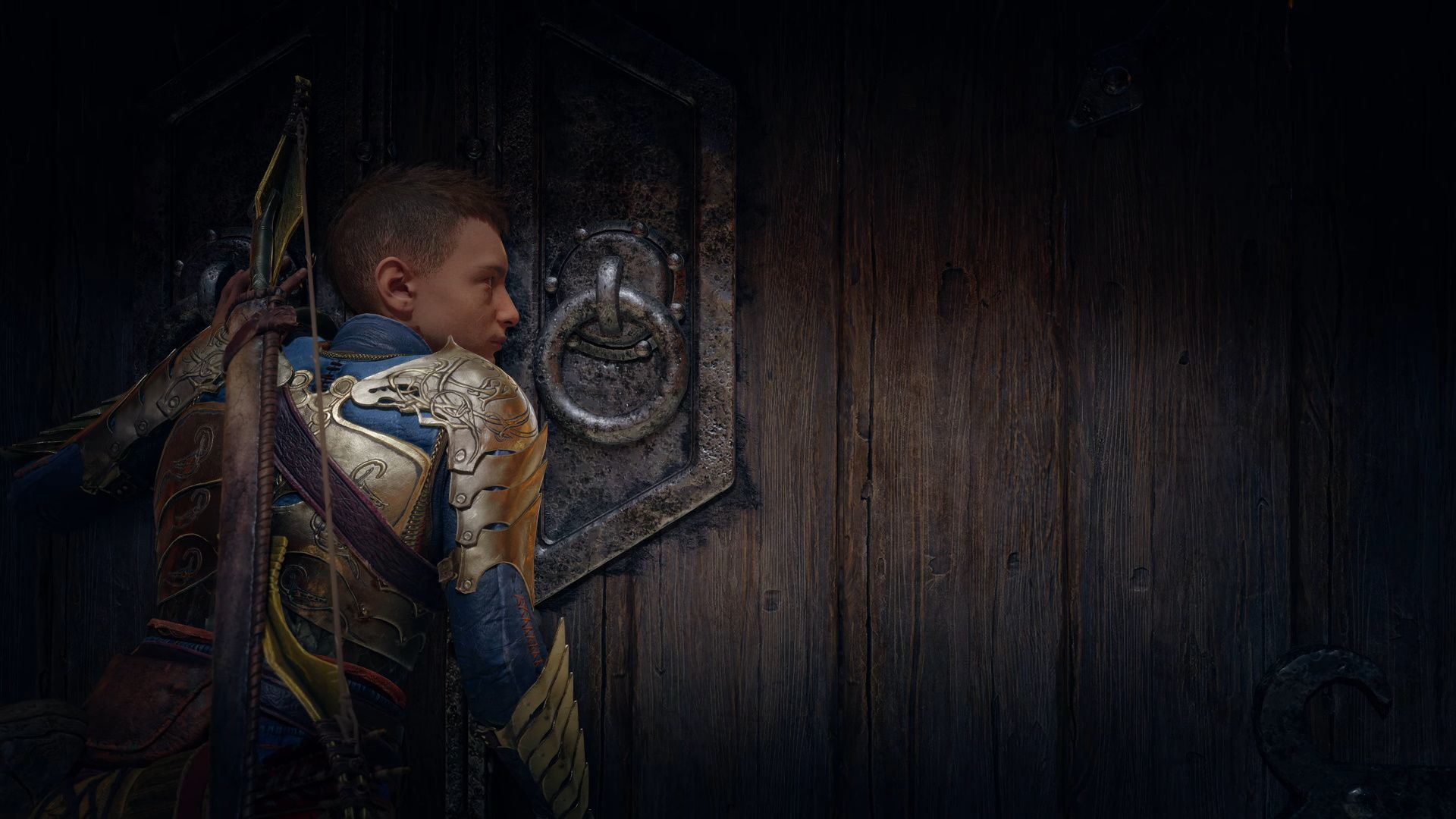 Once you leave Odin's office you can just go straight to your room and finish this chapter if you like. However, there are also some pretty lengthy character development moments that you can engage in. For starters, if you go upstairs, Heimdall will be hanging around having a drink. You can go up to him, and he will just go off on you. As he does. On your way to your bedroom, you can take a left, enter Thrud's room, and talk to her. Finally, at the end of the hall, right next to your bedroom, you can listen in on Thor and Sif talking. All of these interactions are completely optional, but they do provide a little development for each. 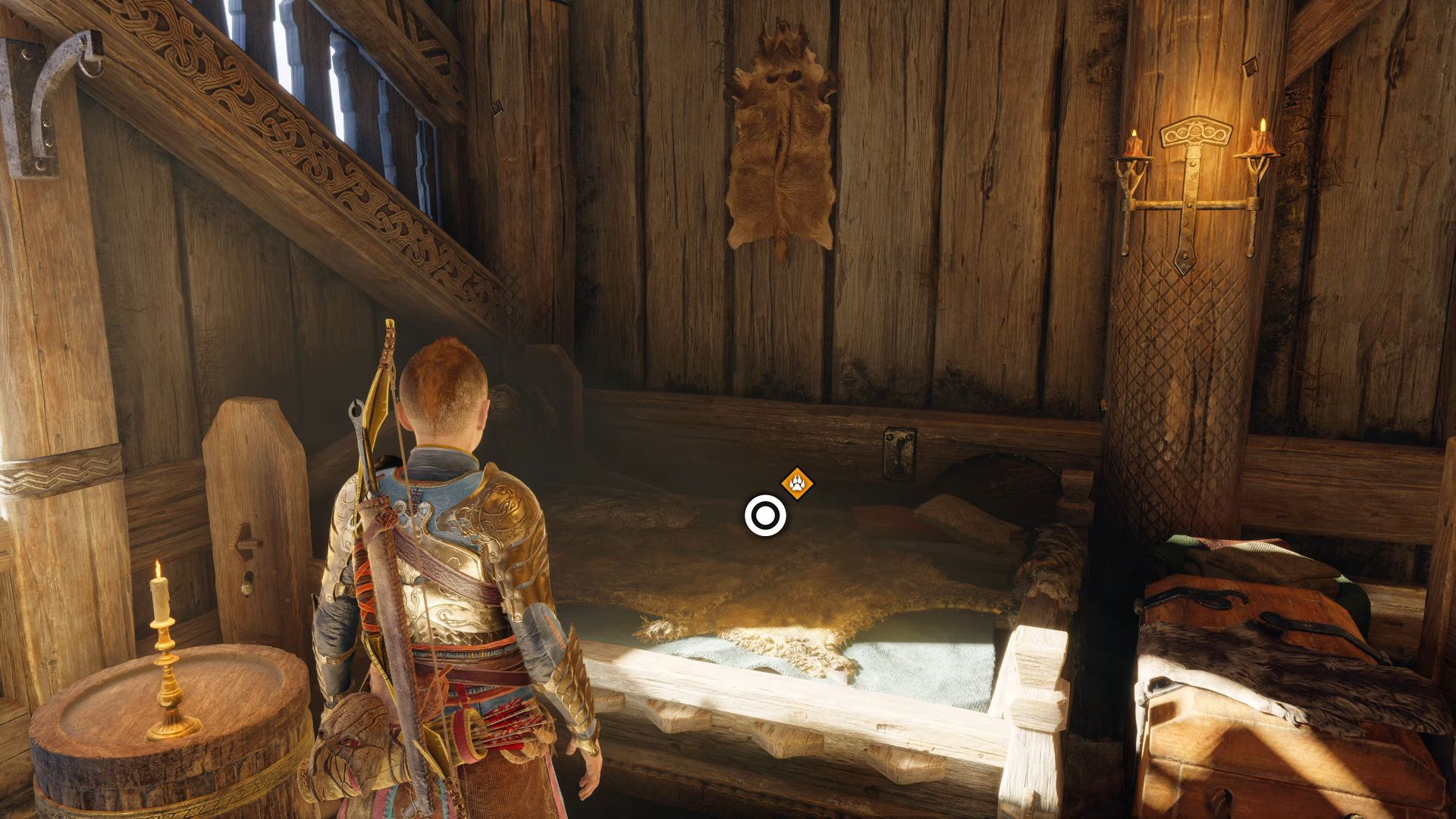 Once you have done everything you want to do, head to tuck into your bed, and you will have officially completed the Into The Fire quest line. Atreus will clean up his newfound mask a little, and you will transition back to Kratos. Which will start The Word Of Fate quest. Which will be covered in the next guide.