God of War Ragnarok's The Weight of Chains is one of the first Favors you will encounter in the game. It will see you bouncing between islands, finding a mysterious key, before boarding a massive whale and freeing it from its enslavement.

This is a dynamic quest that features multiple puzzles, and a whole host of enemy encounters. During this quest, you will have the opportunity to lay claim to numerous treasures, clear out a Draugr Hole, and take out a couple of Odin's Ravens. Most importantly of all, you will help free a majestic creature from its prison. 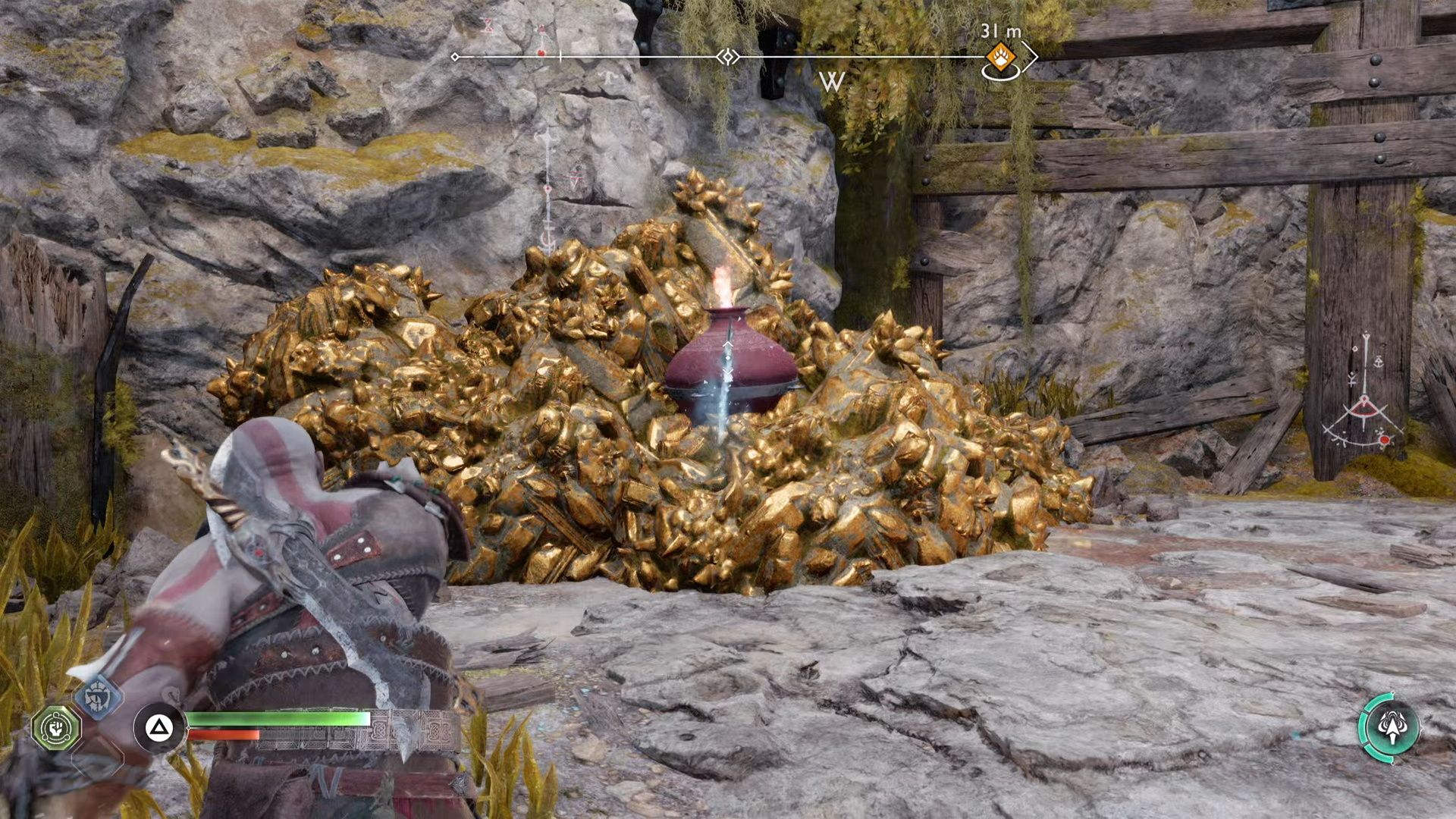 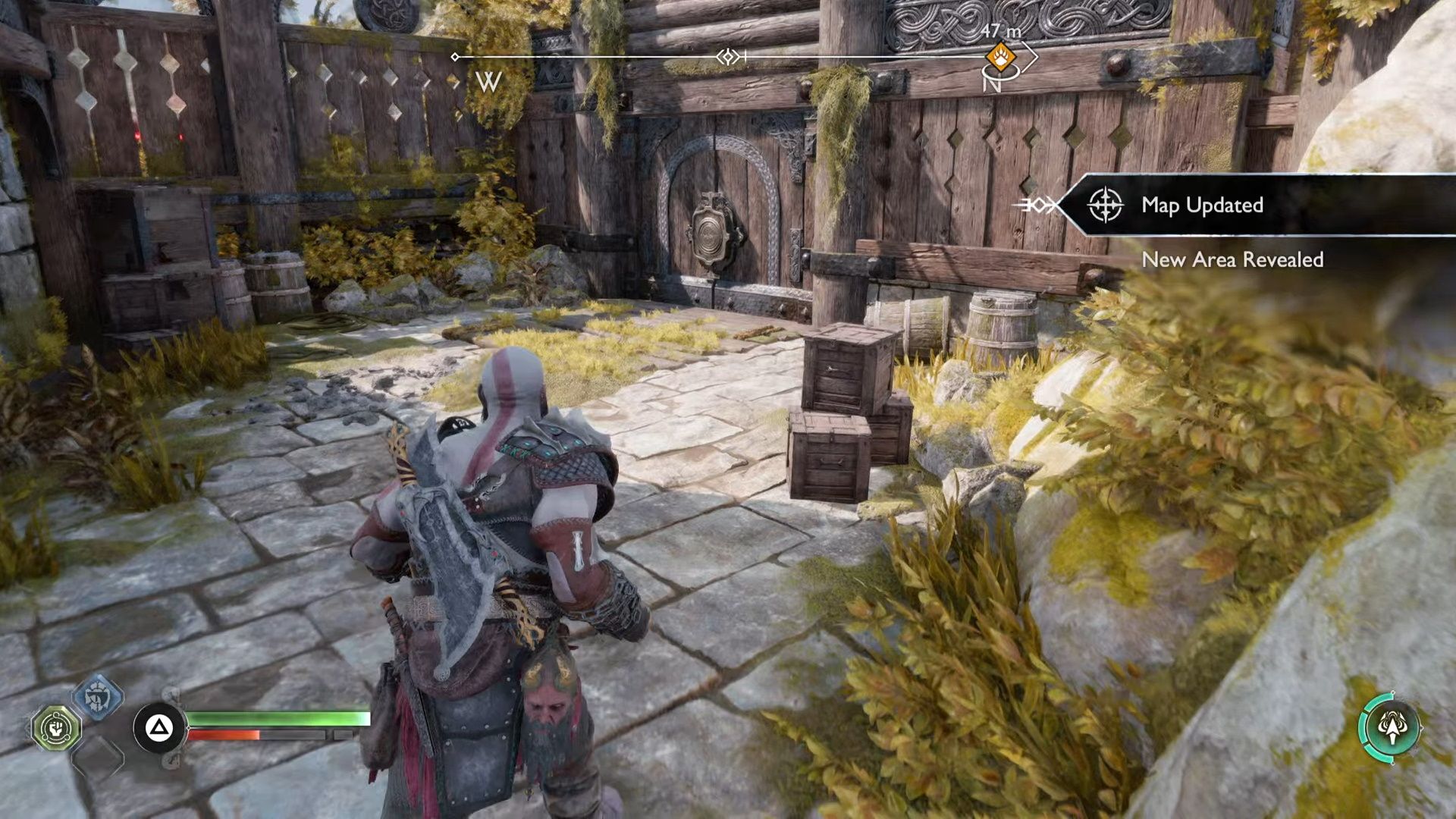 In the Bay Of Bounty, you are going to want to travel to Radsvinn's Rig, which is the mining rig on the right side of the Bay of Bounty. Near the base of the rig, you will find Sindri's popup shop. To the right of this rig, there is a tower with rocks lining the base. You will be able to clear these stones by targeting the explosive casks nearby. Climb up, and you will start the Weight of Chains questline. Before you leave, there are a few things that need to be dealt with. Let's start by getting the dangerous one out of the way. There is a Draugr hole up here that needs to be sealed. 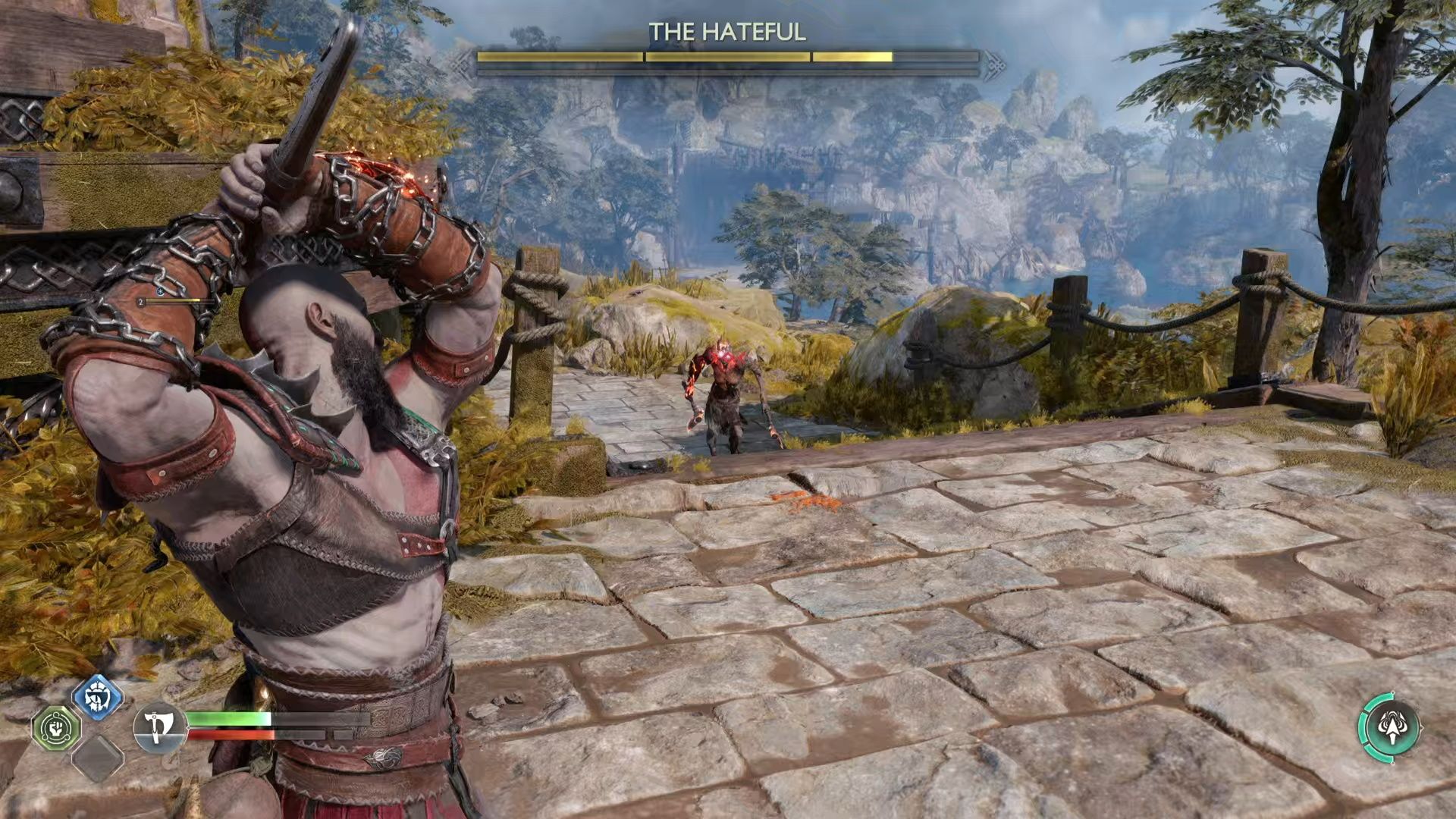 Every Draugr hole will provide you with an encounter with The Hateful. These enemies are typically excruciatingly difficult. However, the version of The Hateful you fight at The Watchtower is definitely the easiest iteration. This iteration of The Hateful has a projectile attack that travels along the ground in a straight line. You will know this attack is coming when they raise both of their hands above their head and the telltale red indicator appears around them. Once they slam their axes down on the ground, simply roll to the side, and you should safely clear this projectile attack. 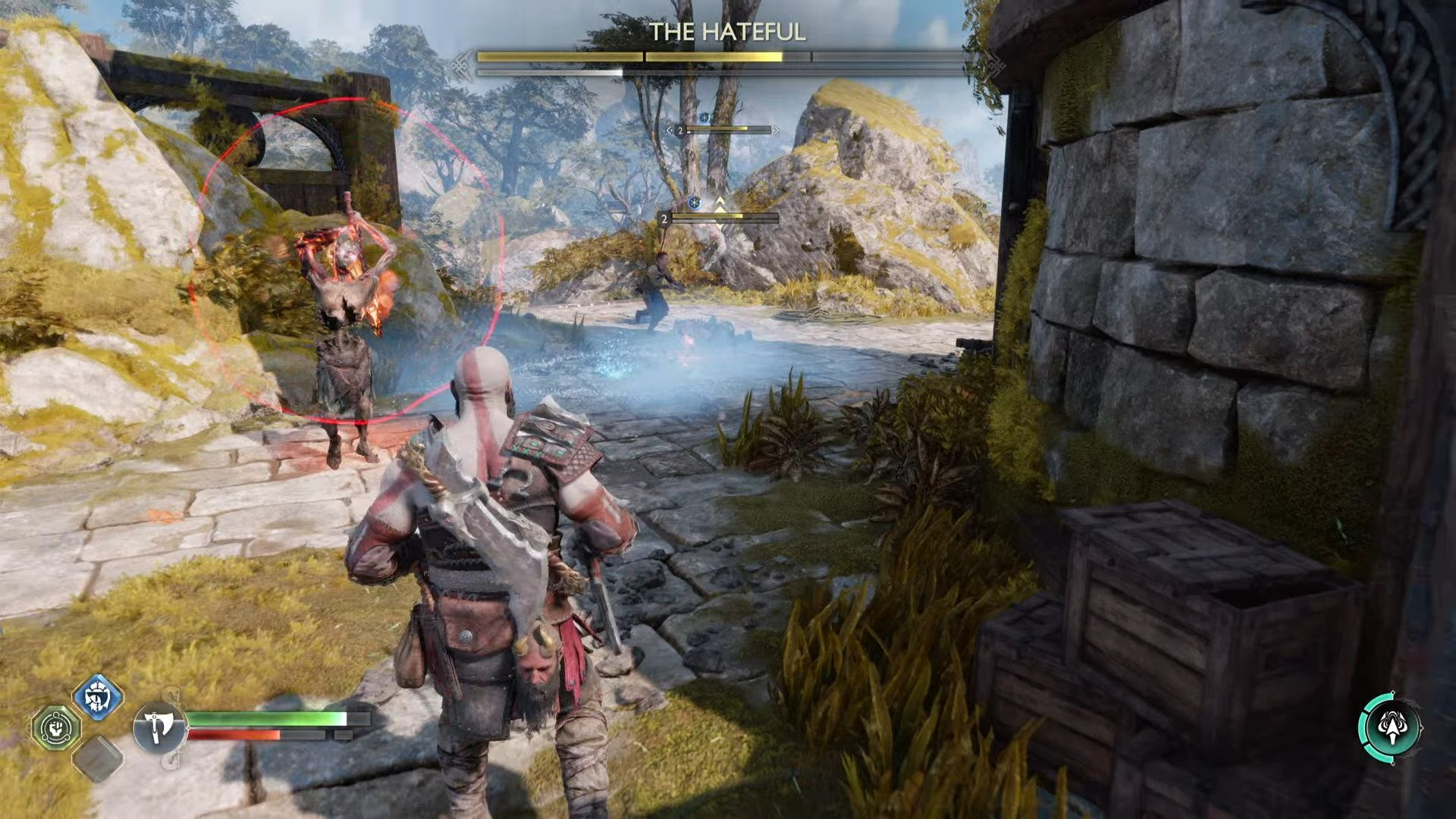 Beyond that, The Hateful will swipe at you with their axes. This version of The Hateful seems a step slower than their harder compatriots, so these attacks are generally not particularly hard to parry. Occasionally, they will throw in an unblockable attack, so look out for that red indicator and dodge when it pops up. Speaking of unblockable attacks, all versions of The Hateful have a fast-moving, unblockable, sprinting, double-uppercut axe swing. This is easily its most dangerous move. So, if you see The Hateful slam its foot on the ground, prepare yourself for this surprisingly fast attack. 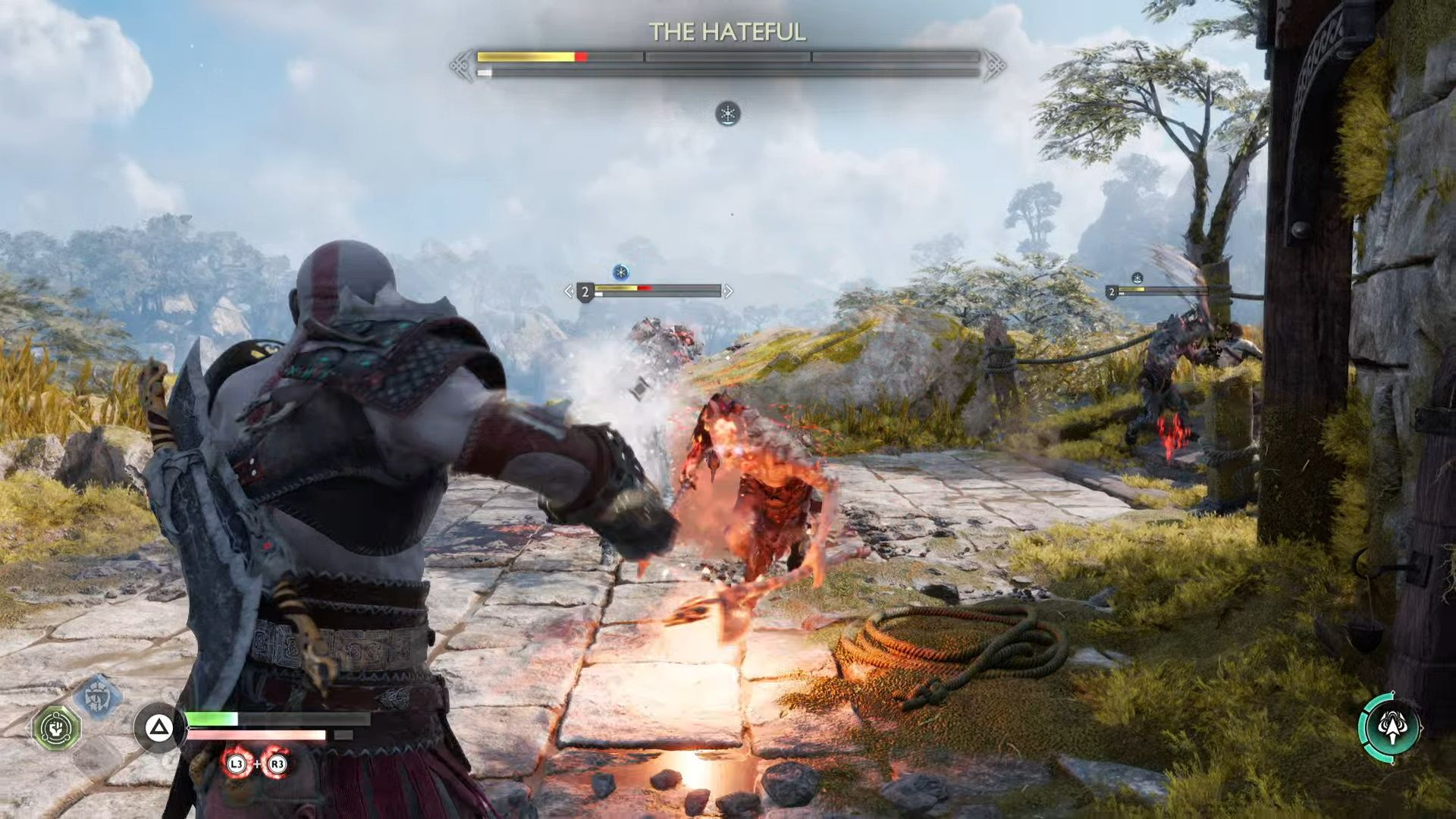 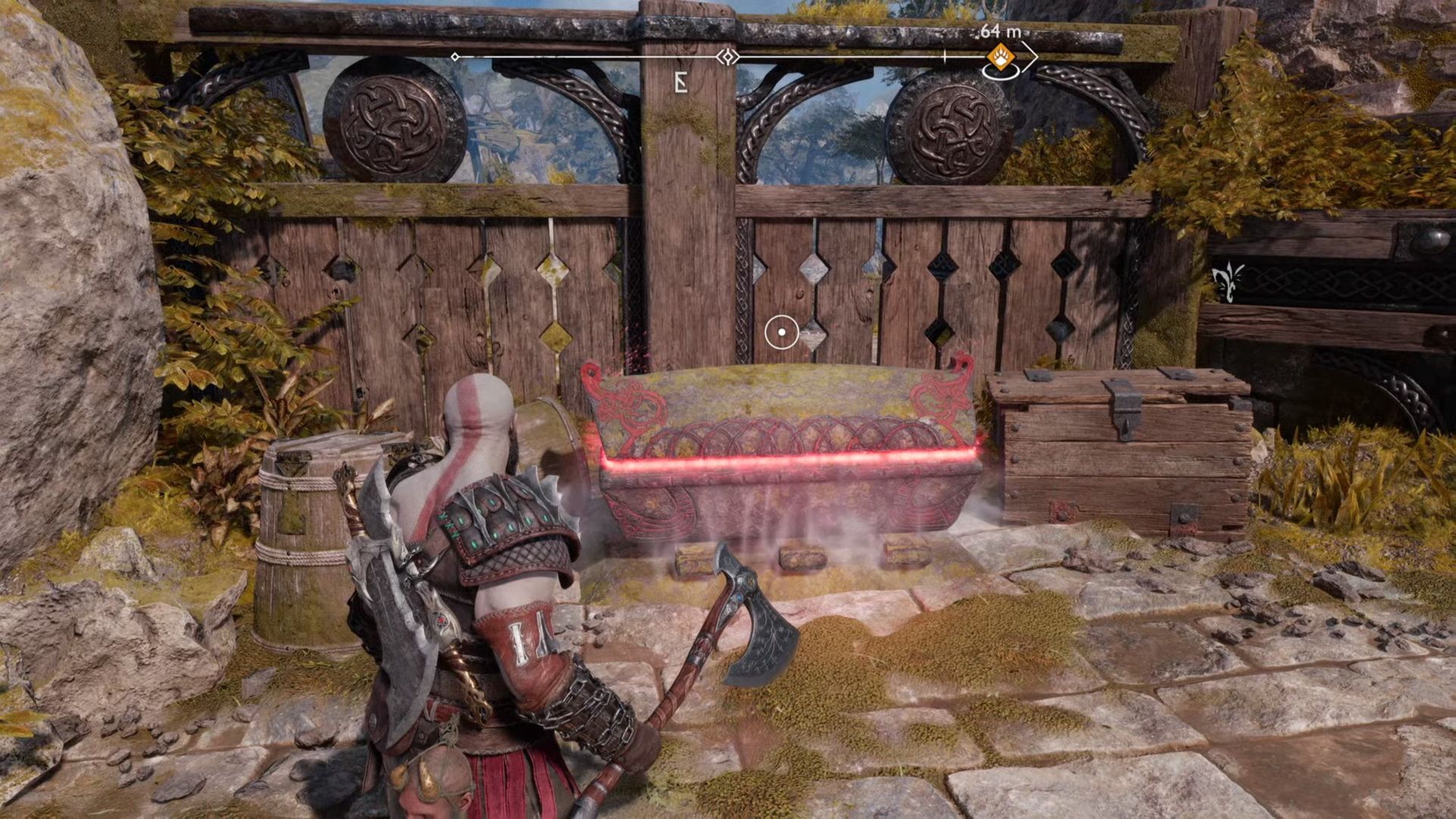 Once you beat The Hateful, collect all the treasures from the Draugr Hole and snipe the raven swooping around this platform (the same one with the Draugr Hole) with your axe. There is also a red chest here for your to collect. Now, leave The Watchtower, and get in your boat. You are going to paddle to the north-most mining operation: Althjof's Rig.

The Island Near Althjof’s Rig 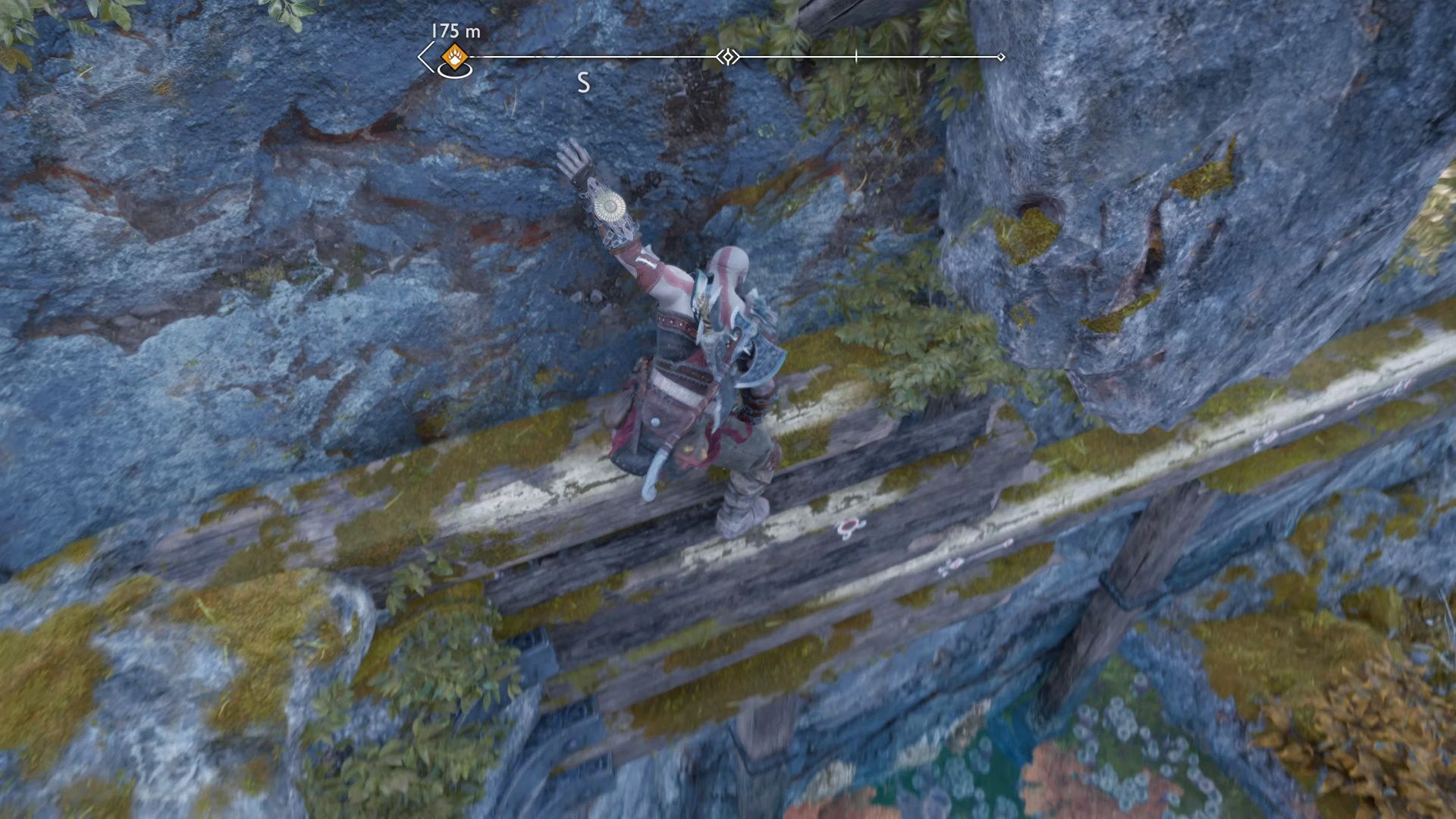 As you approach Althjof's Rig, you will see a small dock with a blue flag on it. Dock your boat and venture forth on this island. A mound of stones will obstruct your path, so just throw your axe at the explosive cask nearby them. Travel up the path, destroy the Wretch nest, and then blow up another pile of stones to the right of the gate. Shimmy along the outside edge, climb up and take out another Wretch nest. 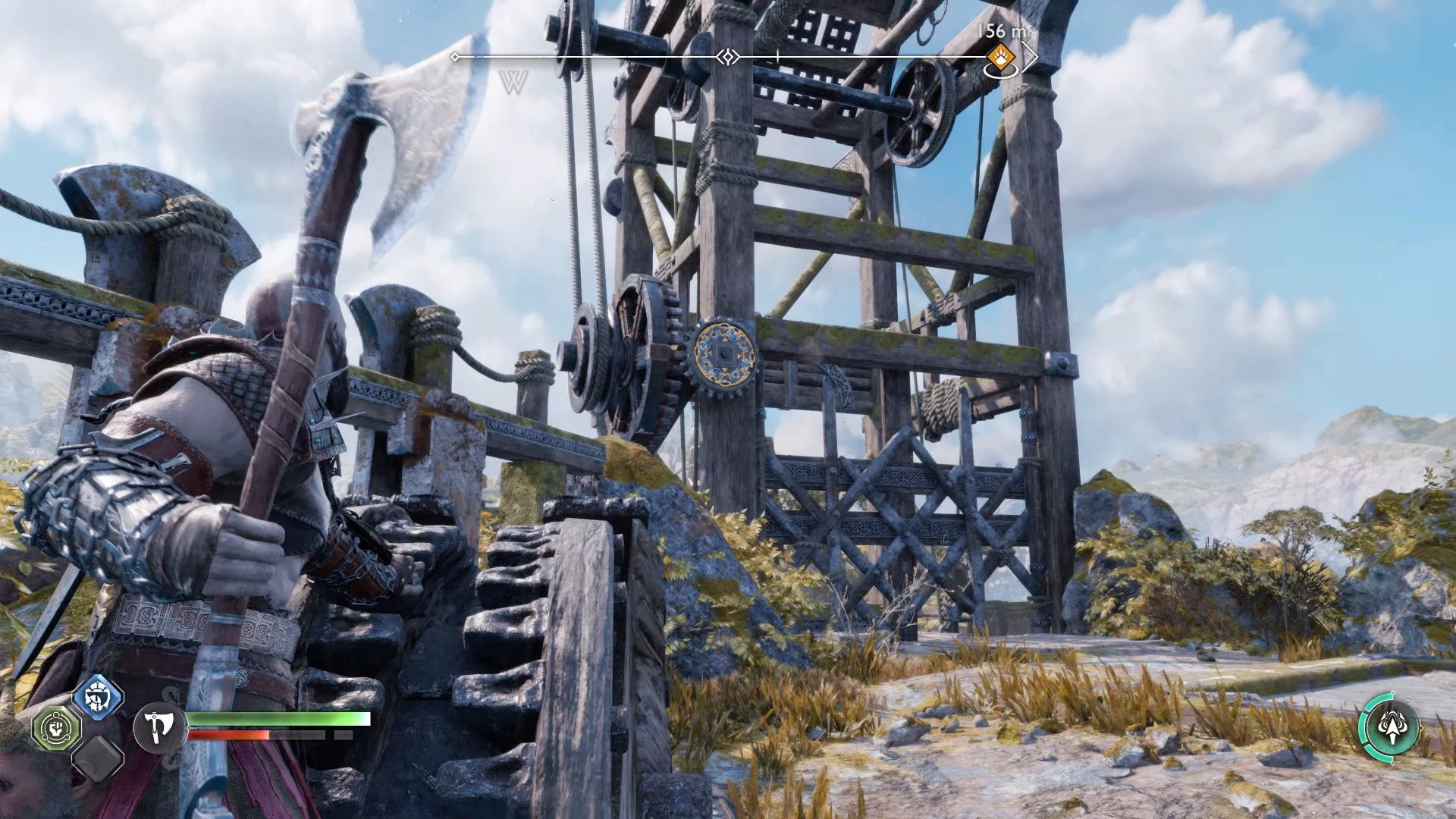 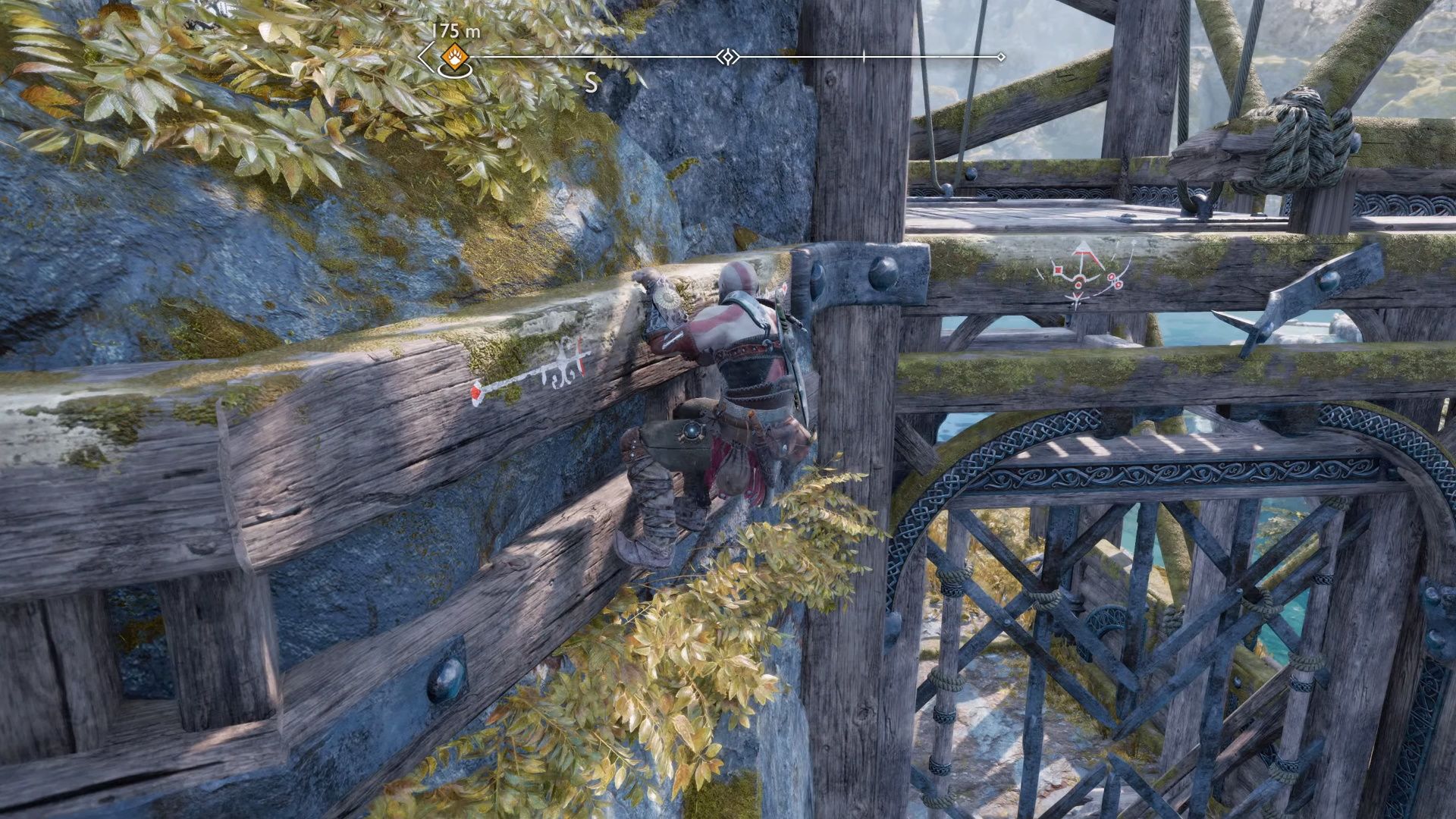 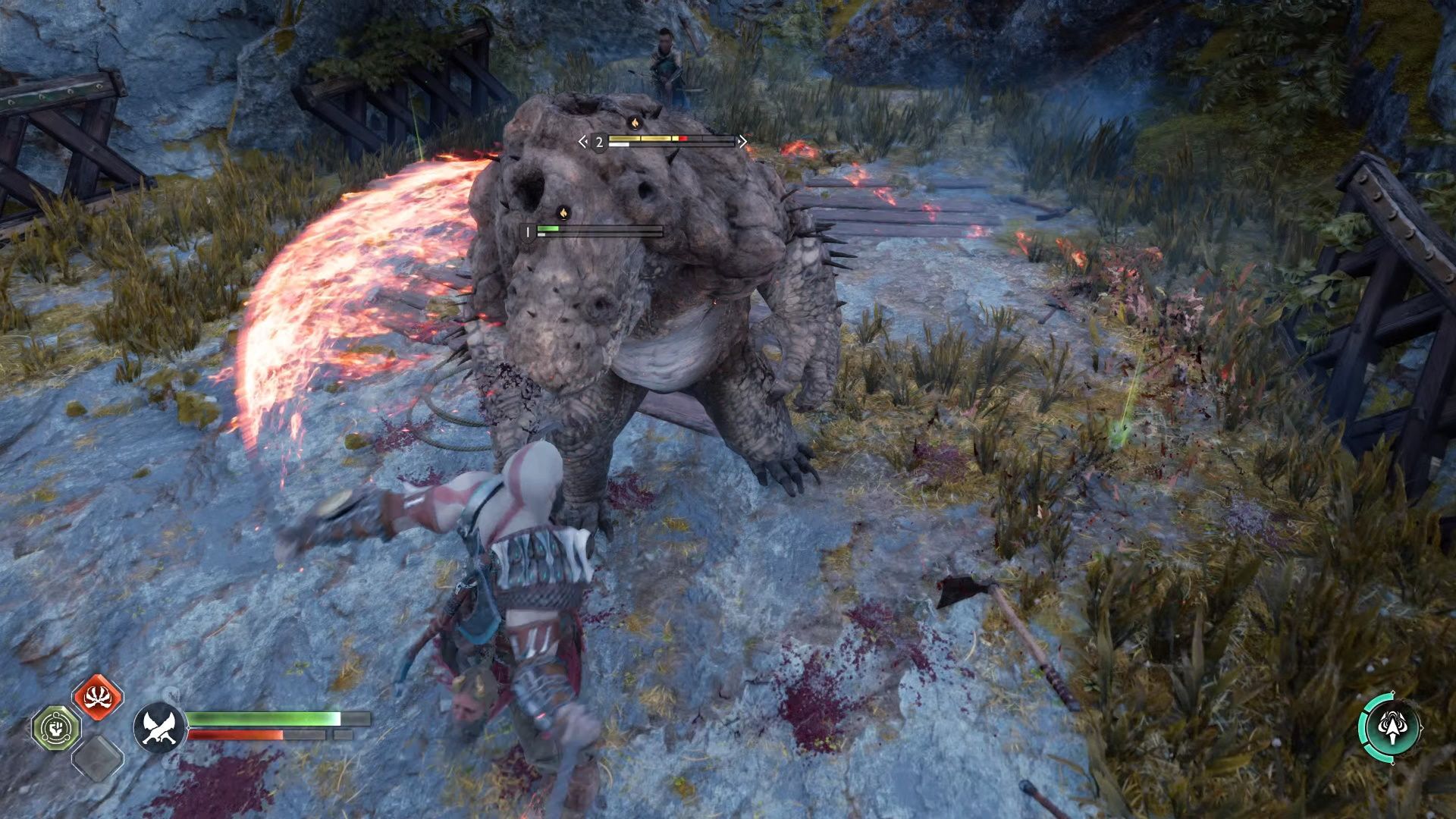 There is a giant wheel here, turn it all the way toward Kratos, then throw your axe at the gear up above, freezing it in place. Now, crawl along the outside edge again, and travel to the right. Hop into the elevator, and recall your axe. Once the lift takes you to the top, Crash through the cracked stone tablet on the ground, and you will find yourself in a chamber with a Bergsra Mother and a red chest. Once you take out the Bergsra Mother, you will be able to get the key from the chest and leave this island.

If you started this quest the moment it became available to you, this may be the first time you have encountered a Bergsra Mother. The best way to deal with this enemy is with your Blades of Chaos as they are highly effective at clearing out the Wretches the Bergsra Mother summons. Just make sure to avoid the unblockable lunging punches she does (these usually come two at a time), and keep the pressure on her. She'll fall quickly enough.

Return To The Watchtower

After you get the key from the island, you will now return to The Watchtower. Insert the key into the locked door and enter an area with a large drum. Raise the drum up for Atreus to shoot. This will cause the mighty Lyngbakr to rise up from the bottom of the lake. You will now have unlocked your next location: Lyngbakr Island. Jump down from The Watchtower, hop in your boat, and Paddle toward the massive whale. 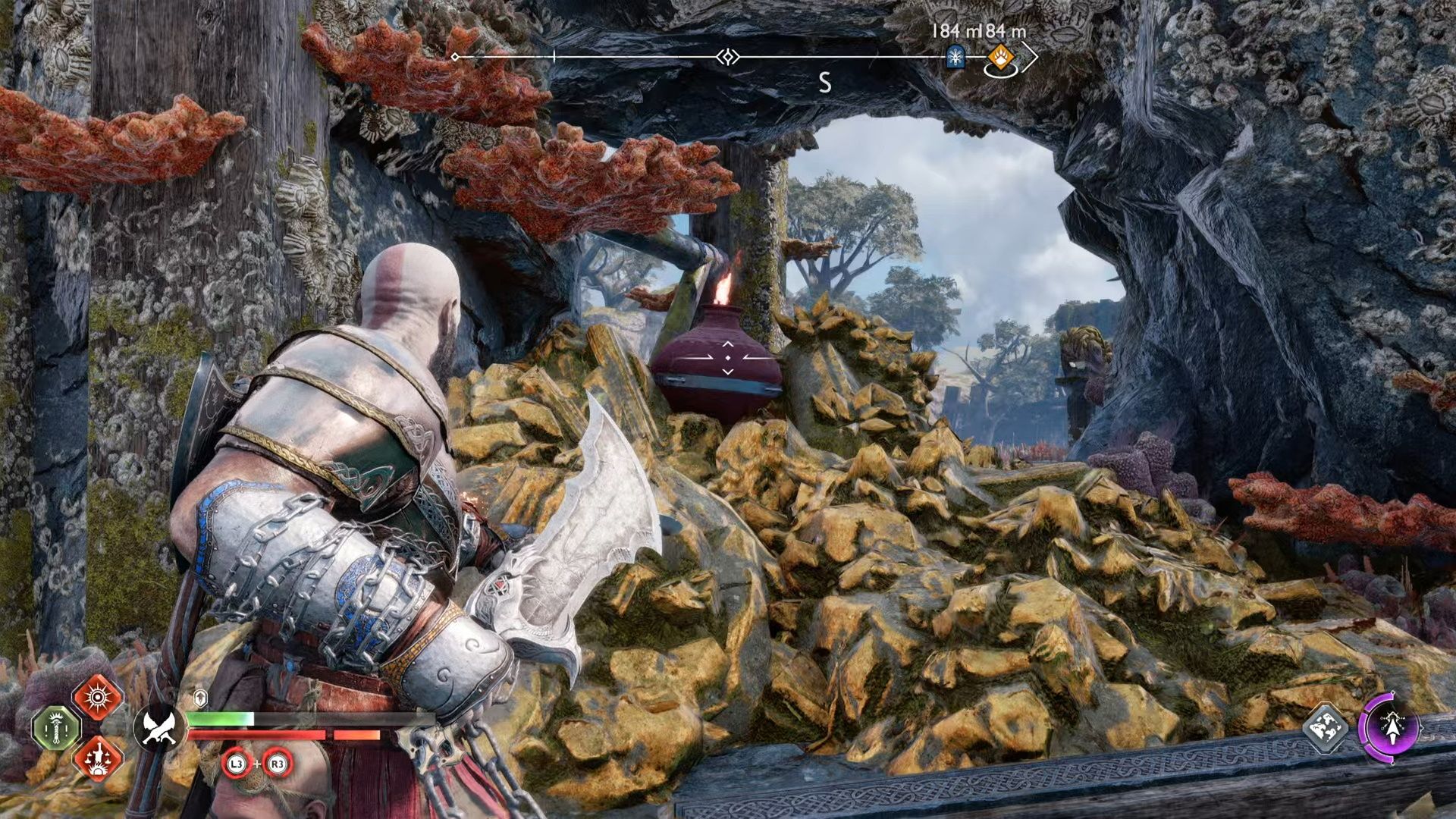 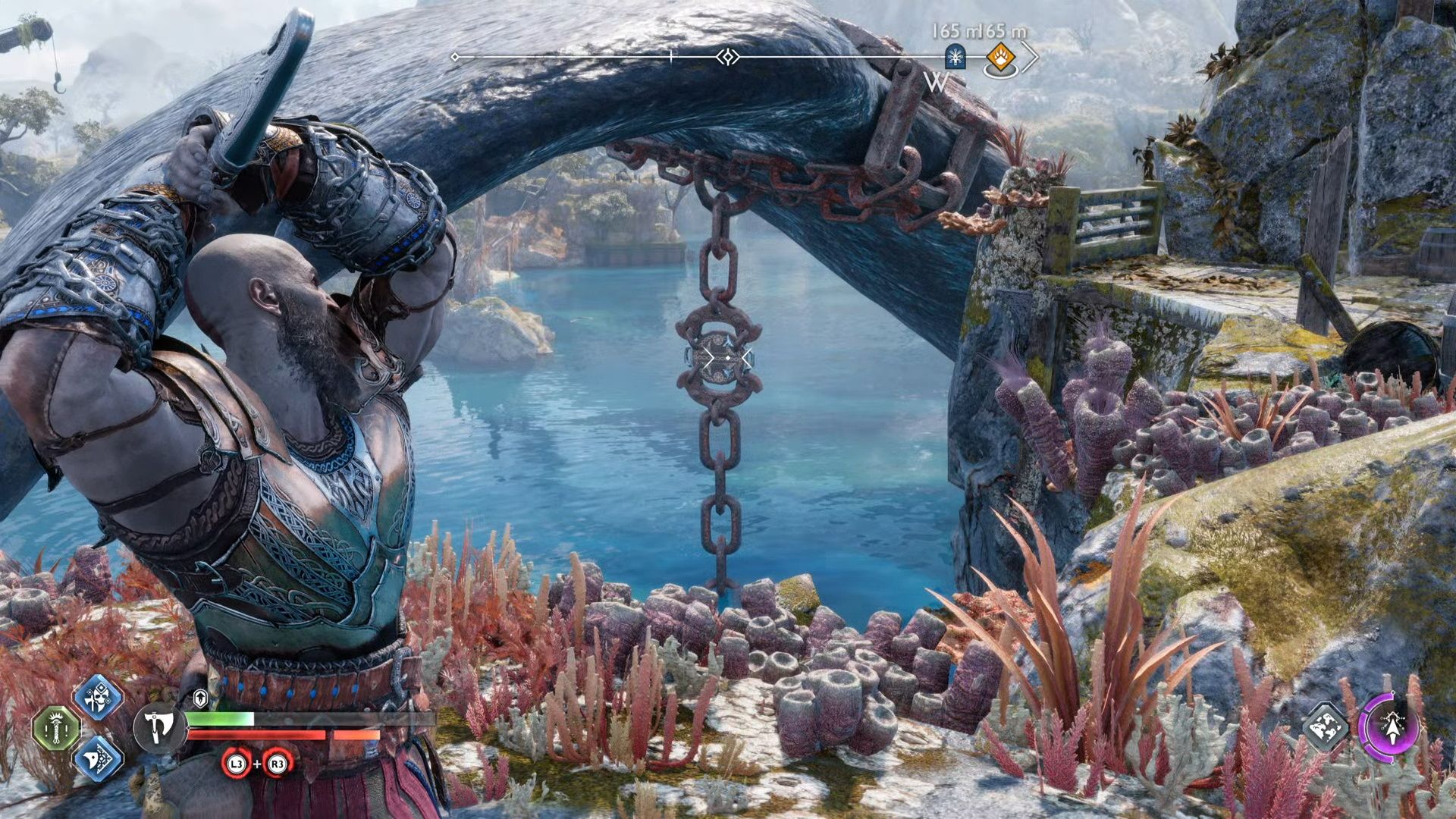 Dock your boat at the base of the whale and climb up. You will be confronted by a number of Draugr. Once you kill the Draugrs, head toward the gate in the back. You won't be able to lift it, but to the right, you will see a pile of rubble with an explosive cask nearby. Hit the cask with and destroy the rubble. Now, cut the pillar down, causing Lyngbakr to raise his flipper. Sever the chain holding said flipper, and you will be one step closer to freeing the majestic beast. 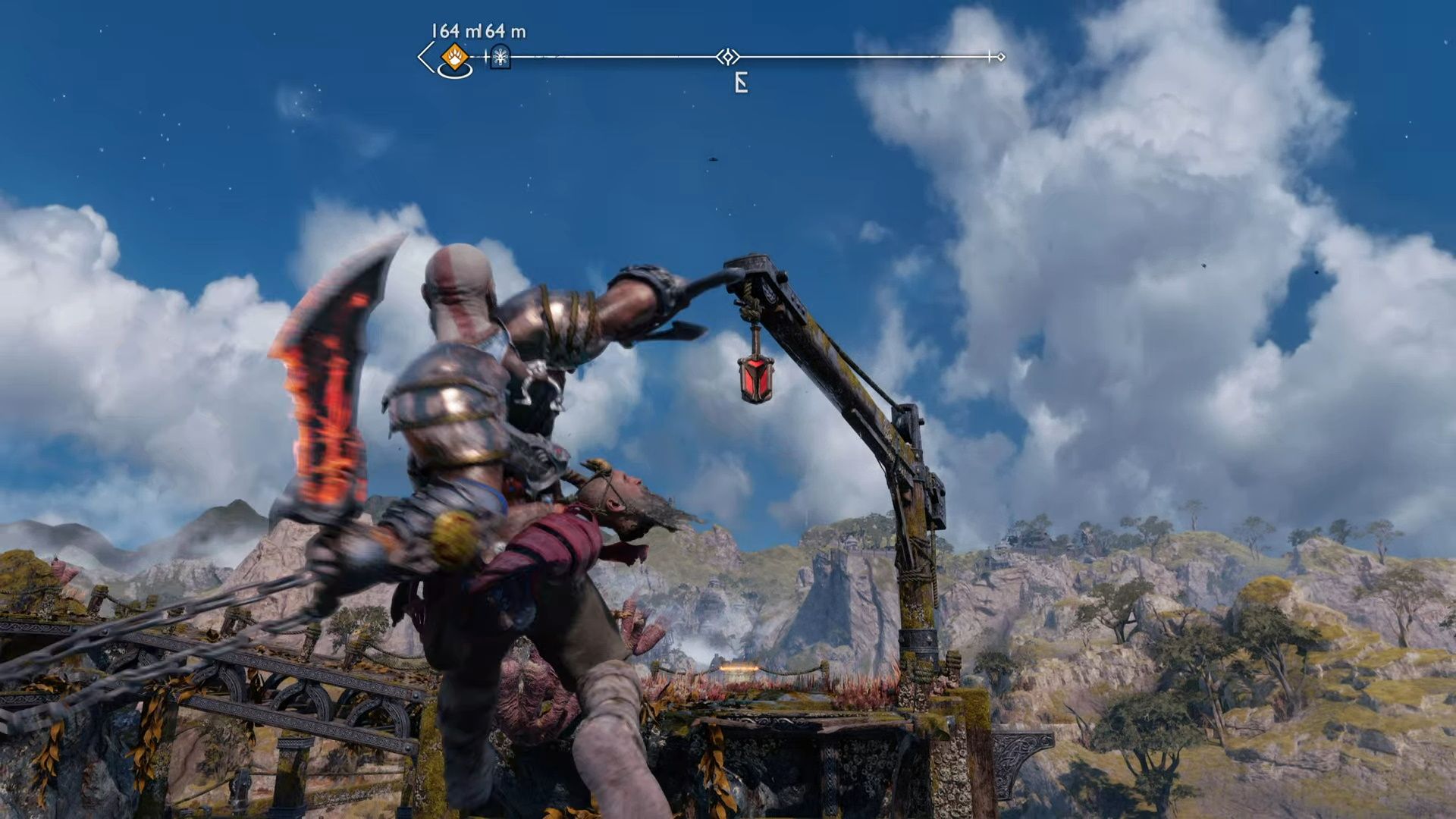 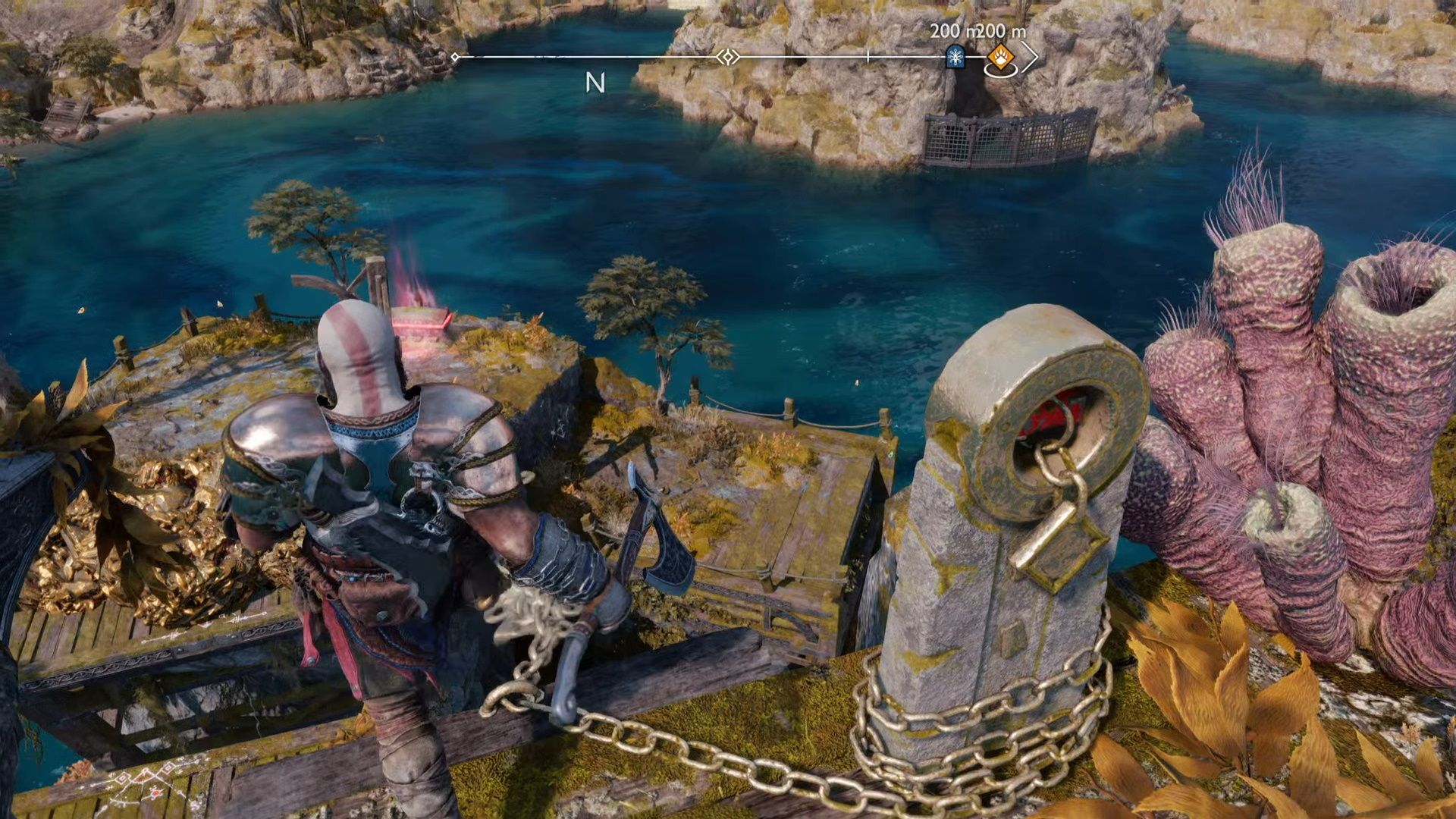 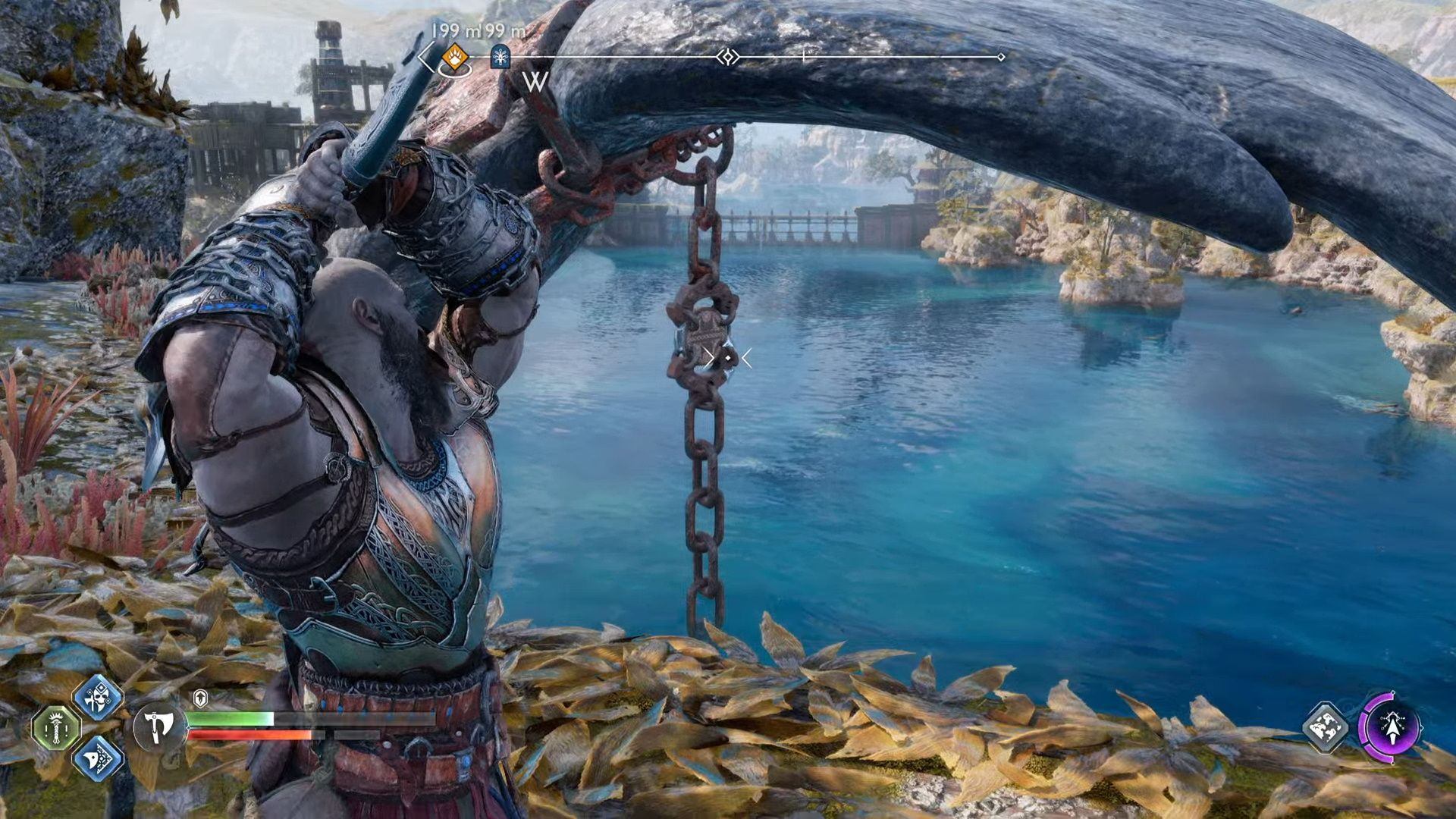 Once you cross the gap, there will be a chest waiting for you on the other side. You will fight another Draugr and a few more Nightmares. Now, kick the nearby chain down. Climb down to the platform below, and sever the second of Lyngbakr's chains.

Once the colossal whale moves its flipper, it will knock some debris loose—revealing a Wretch nest. Destroy the Wretch nest, and you will have access to an explosive-generating device. Grab the explosive, and throw it at the nearby rubble. This will reveal a red chest. 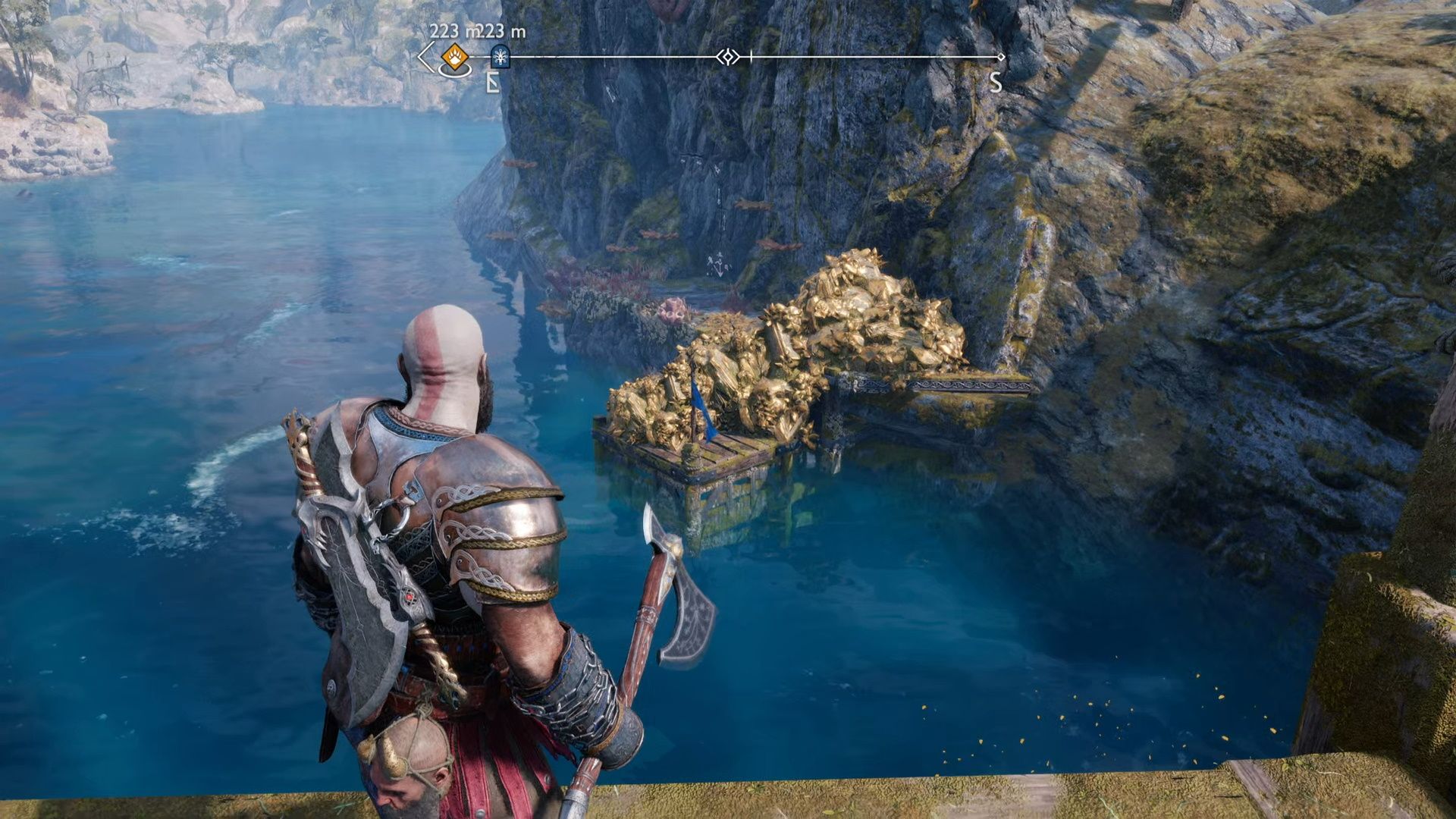 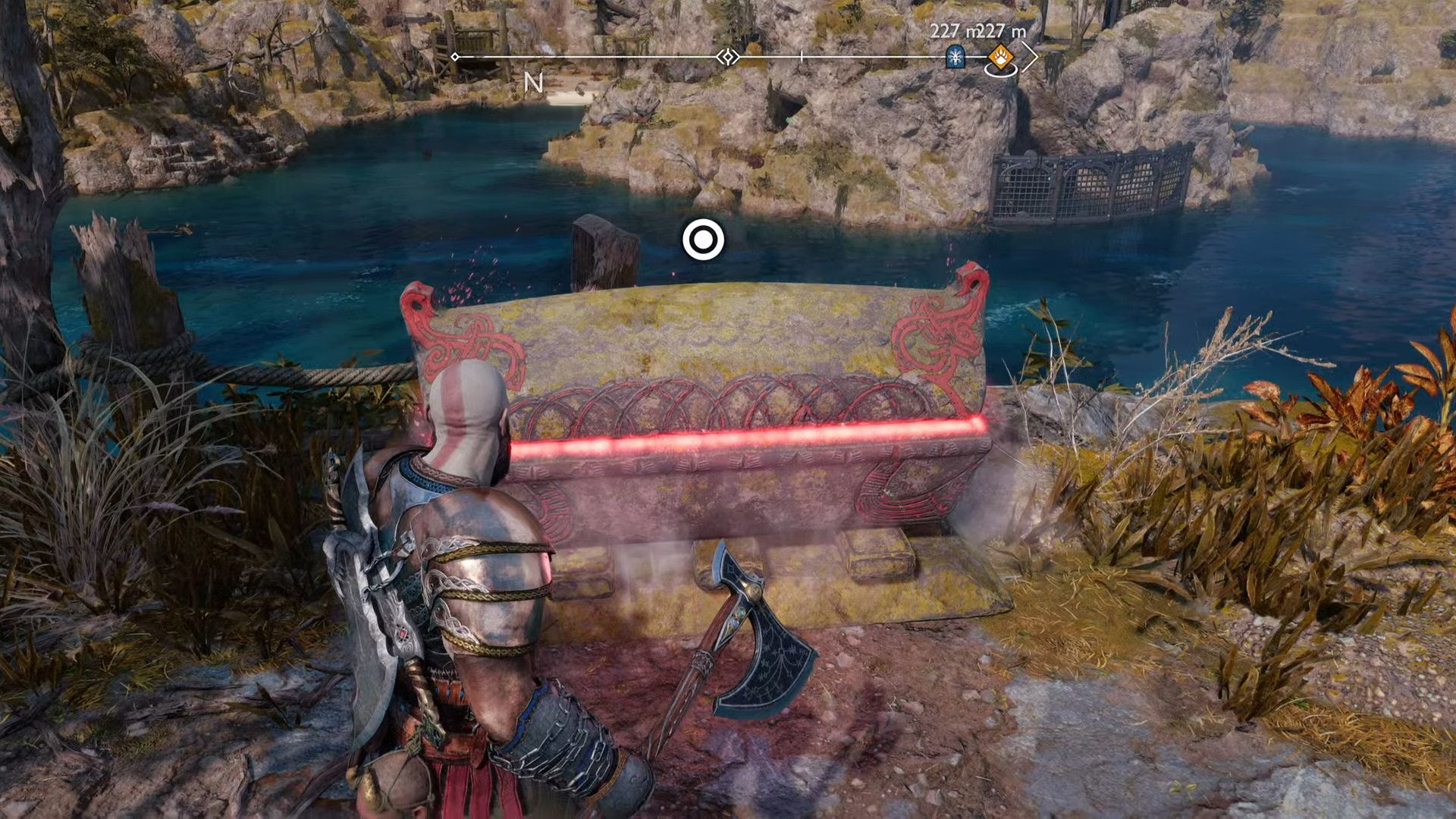 Go get another explosive and travel to the edge of the platform you revealed by destroying that rubble moments ago. You will see a giant pile of rubble covering a dock in the distance. Throw the explosive at the rubble and clear it. Now, lift the nearby gate. 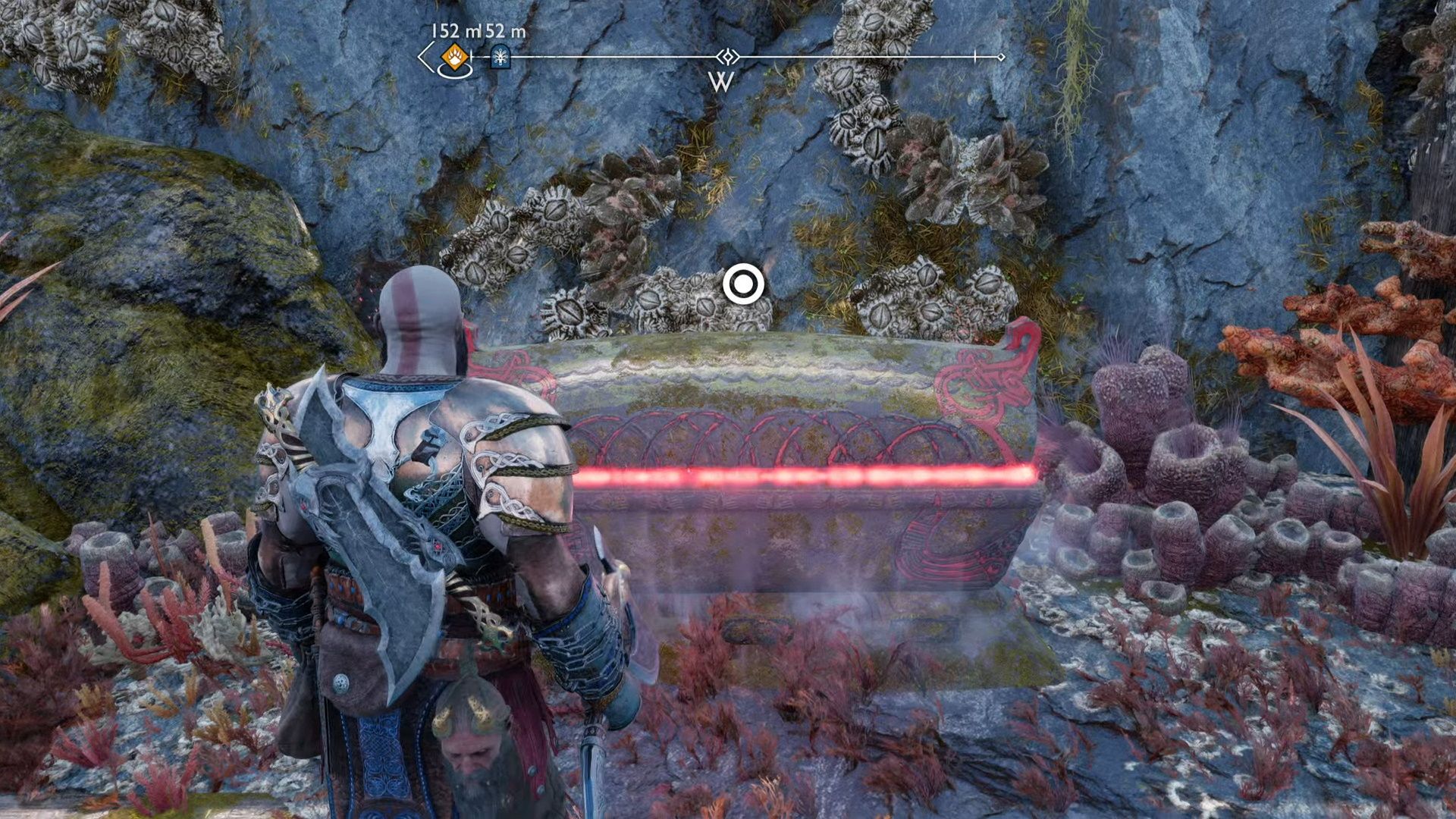 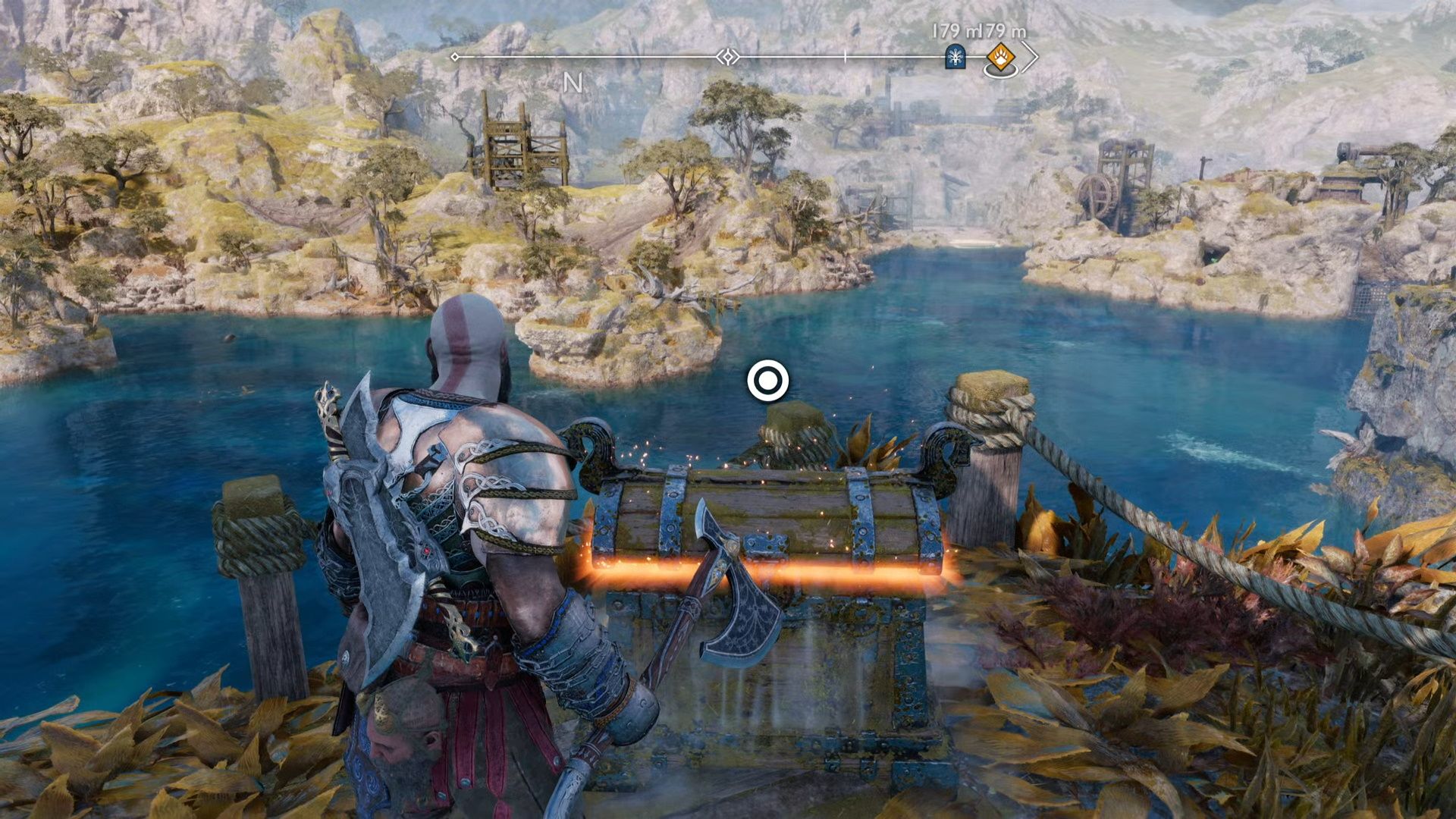 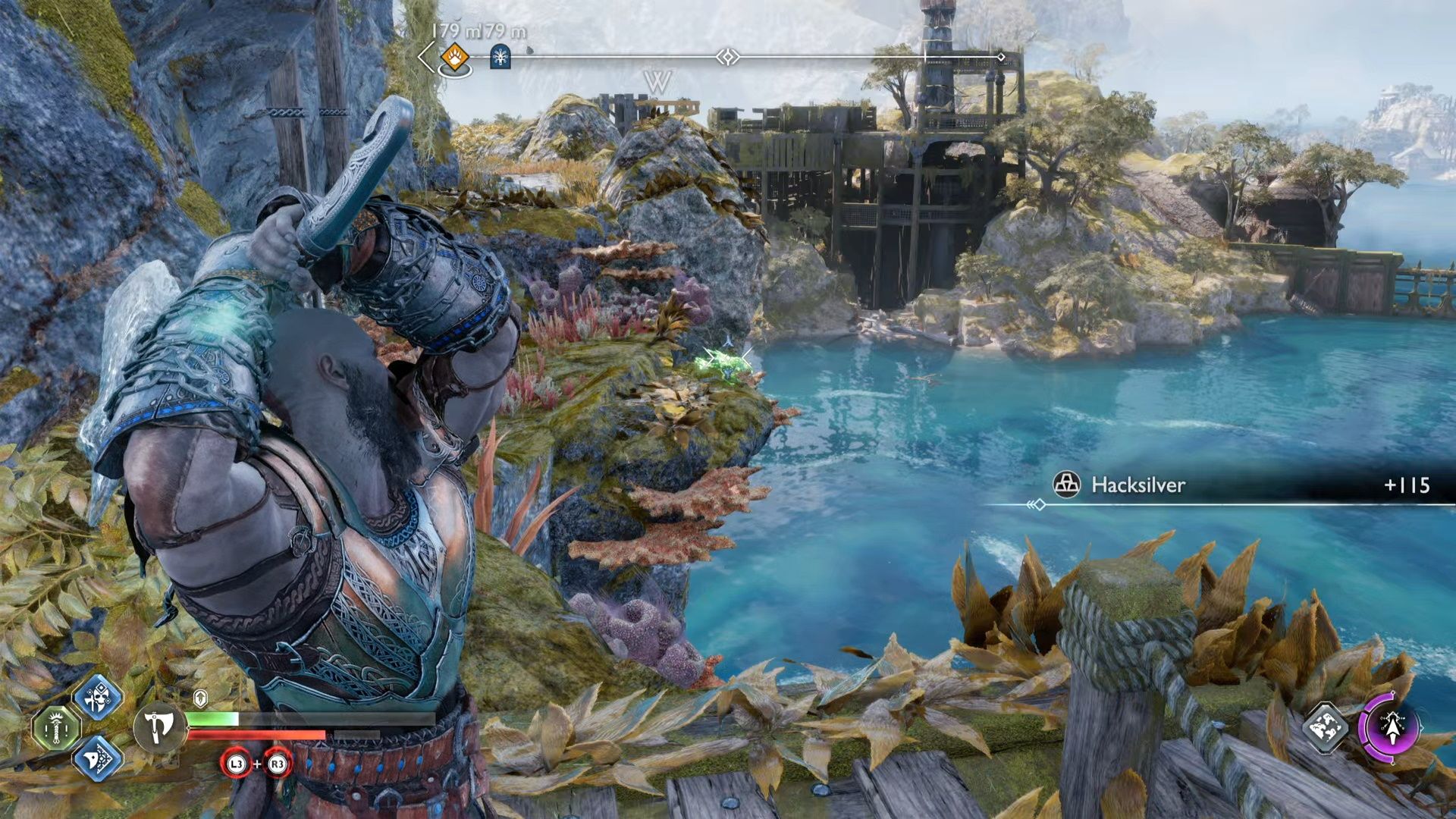 Grab another explosive, and head toward that pile of rubble near the chain that you climbed earlier (the one that led to the Rune Tablet). Throw the explosive at that rubble, and you will now be able to swing across the gap and claim another red chest. There is a nearby cave over here as well. Crawl through it and you will get another chest. There is also a raven out here for you to throw your axe at. 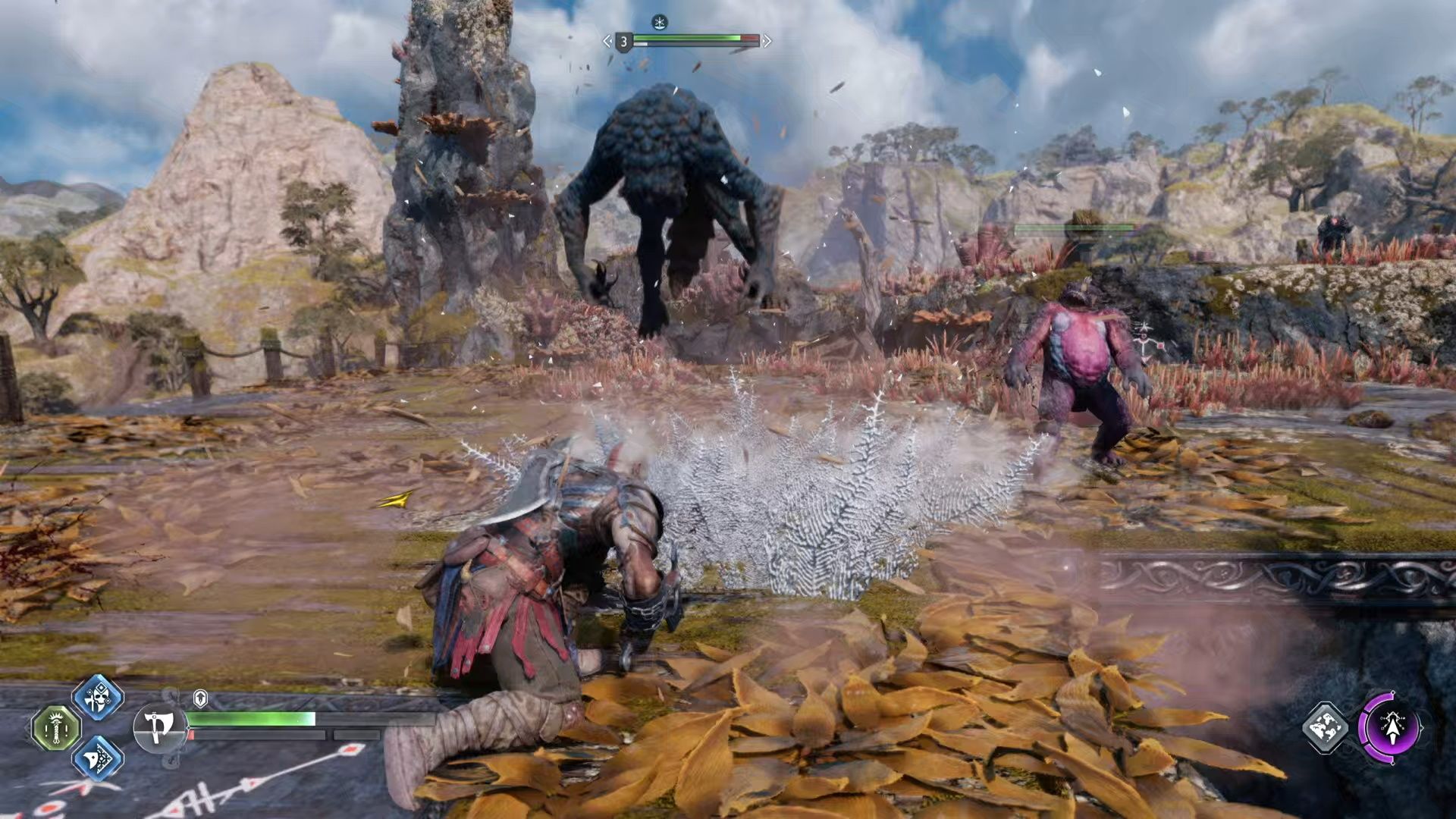 You will get into your boat now and paddle to that dock you revealed. Once you climb up, you will face a group of Draugrs and Nightmares. Once you kill them, you will face off against a group of Grims. Once you clear them out, grapple across the gap and loot the treasure chest. Lift the nearby gate up, and you will be back at that part of the rig with the explosive-generating device. Grab one, then hop back over to where you just fought the Grims. Destroy the pile of rubble and there will be another red chest. 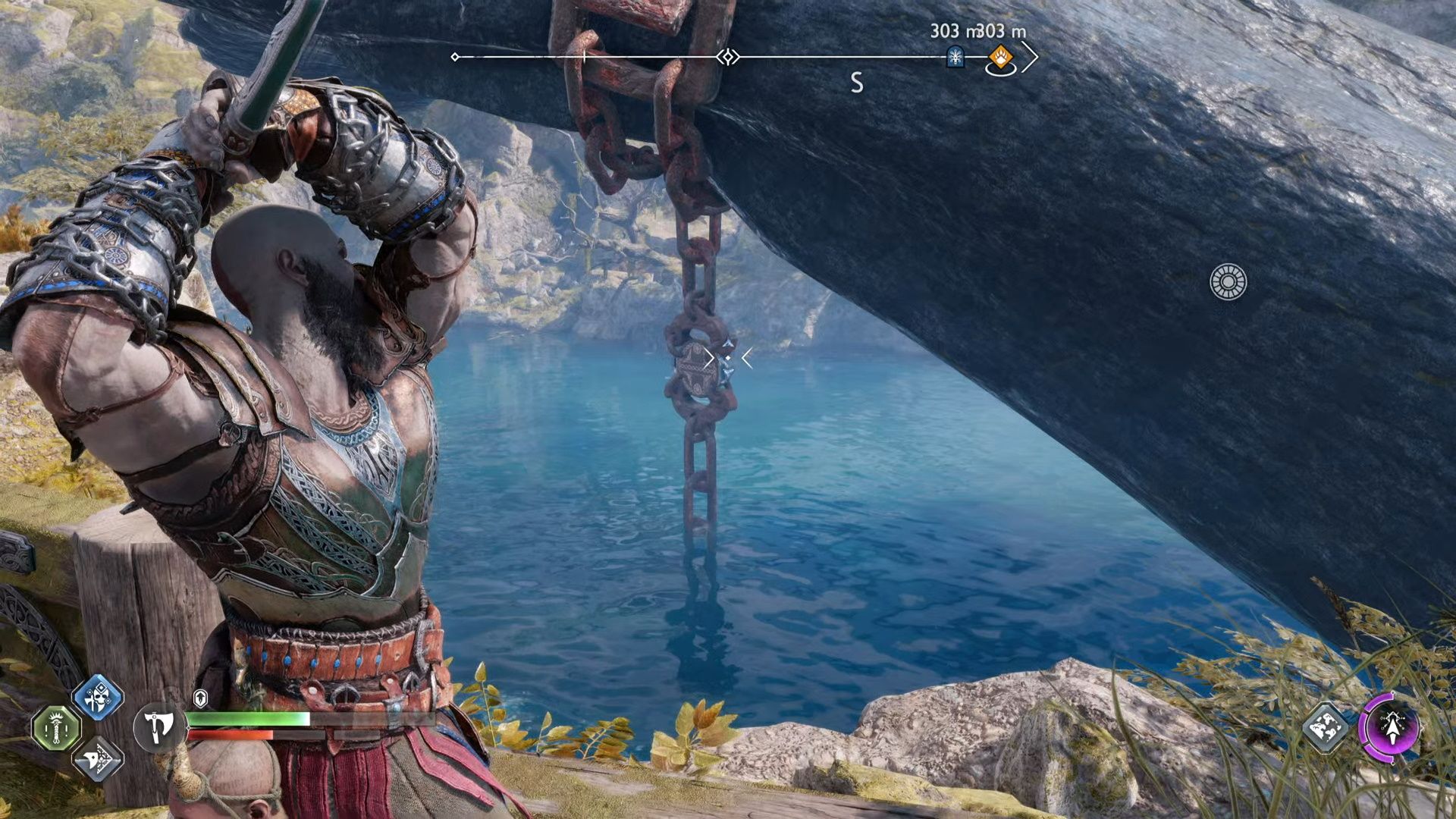 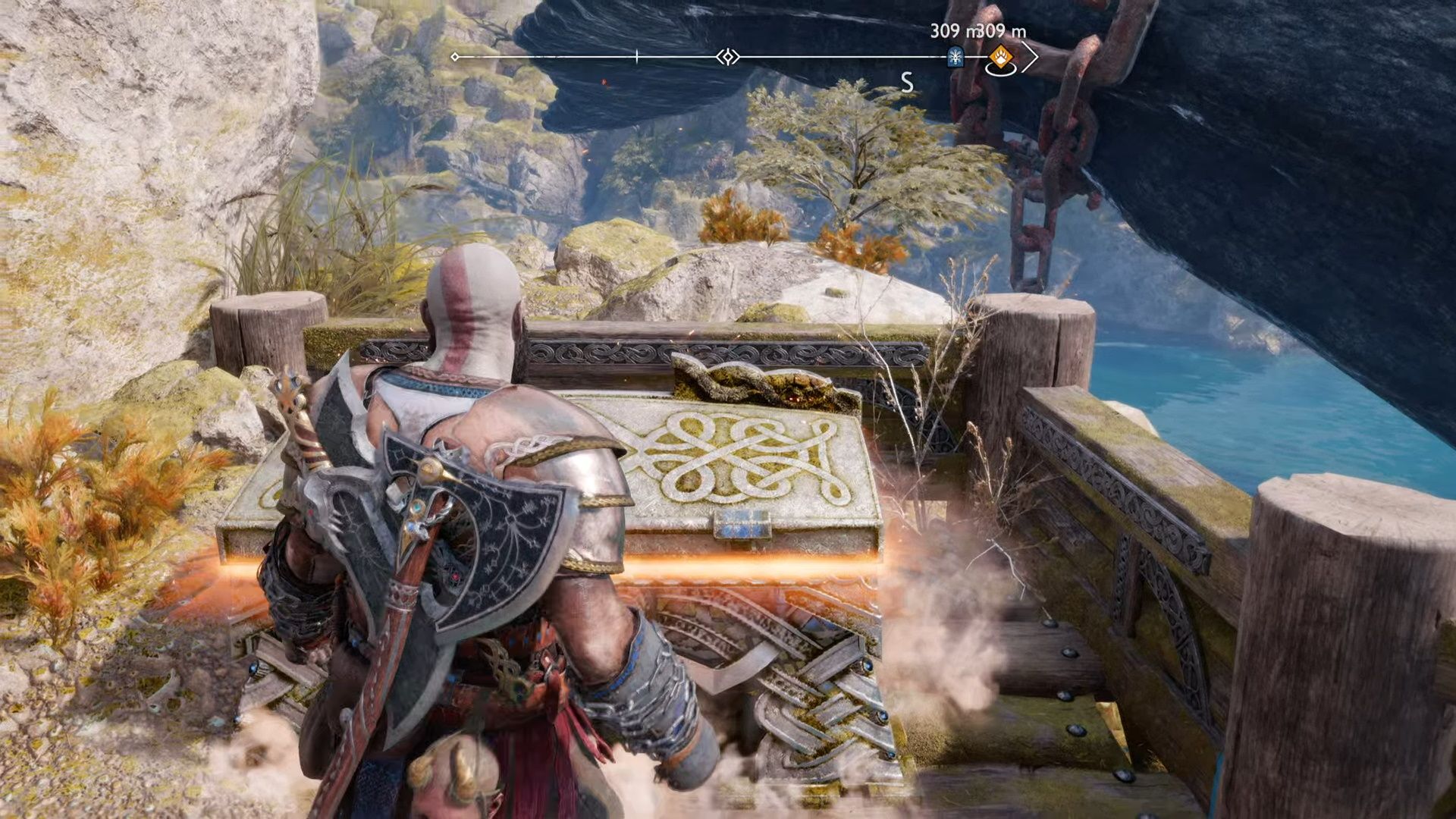 Now, slide down the rope, and open the Legendary Chest. You will now be able to sever the final chain and free Lyngbakr. Though, he doesn't start moving once you cut the chain, so jump down, grab the chest, and paddle your boat up to Lyngbakr's eye so Mimir can try to talk to him. After a brief conversation, you will complete The Weight Of Chains favor.