God of War Ragnarok The Reckoning quest line continues as you enter the Eastern Barri Woods. Having just conquered the mighty Forest Ancient, you may think you are due a breather. Well, Ragnarok disagrees. Prepare to engage in a number of enemy encounters, including a number of mid-boss battles. You will even clear out another Draugr hole along the way.

While there is an abundance of combat in this area—and that is absolutely the emphasis of this section—there are also a number of treasures hidden throughout. We will make sure to point you in their direction. 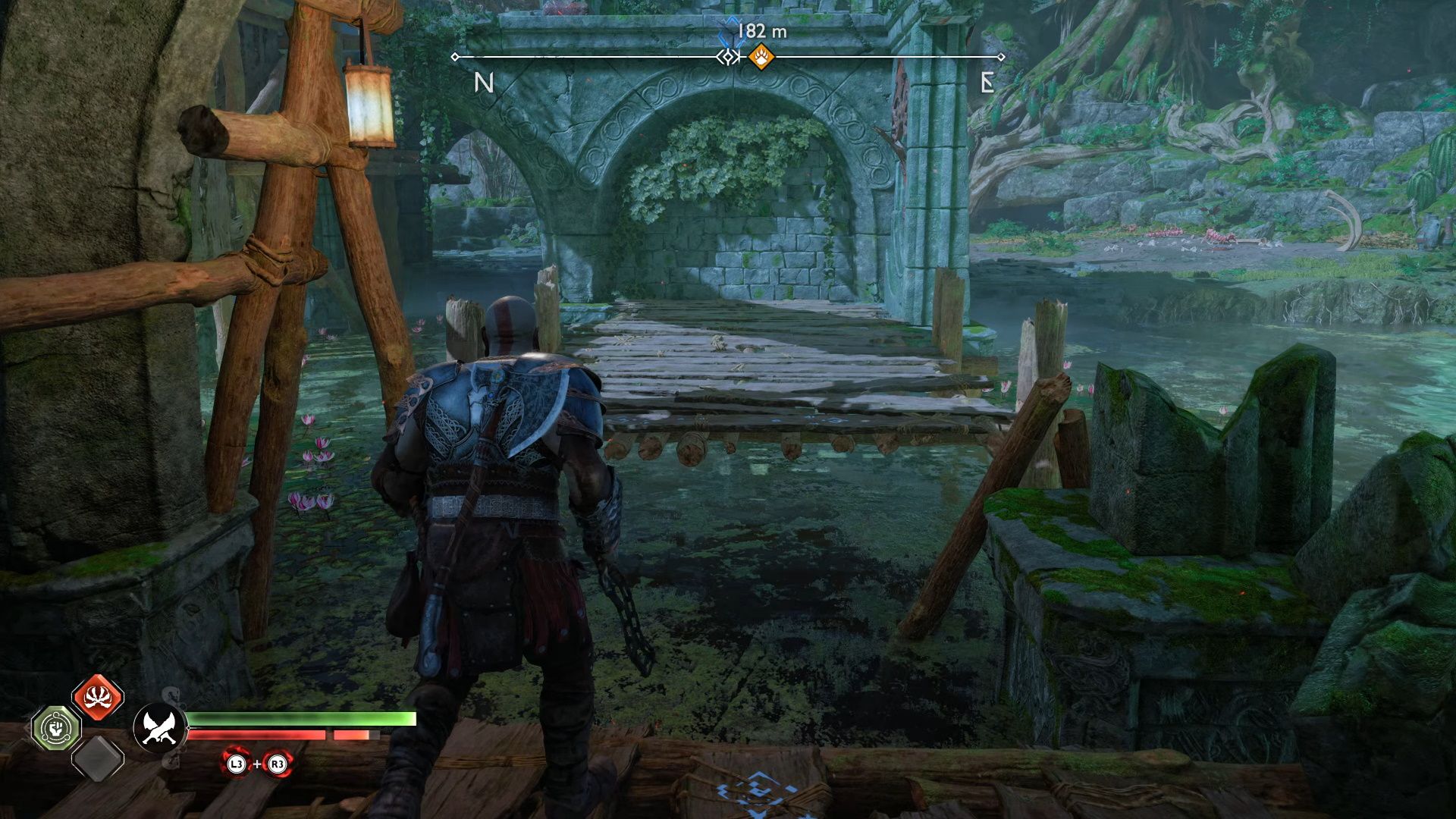 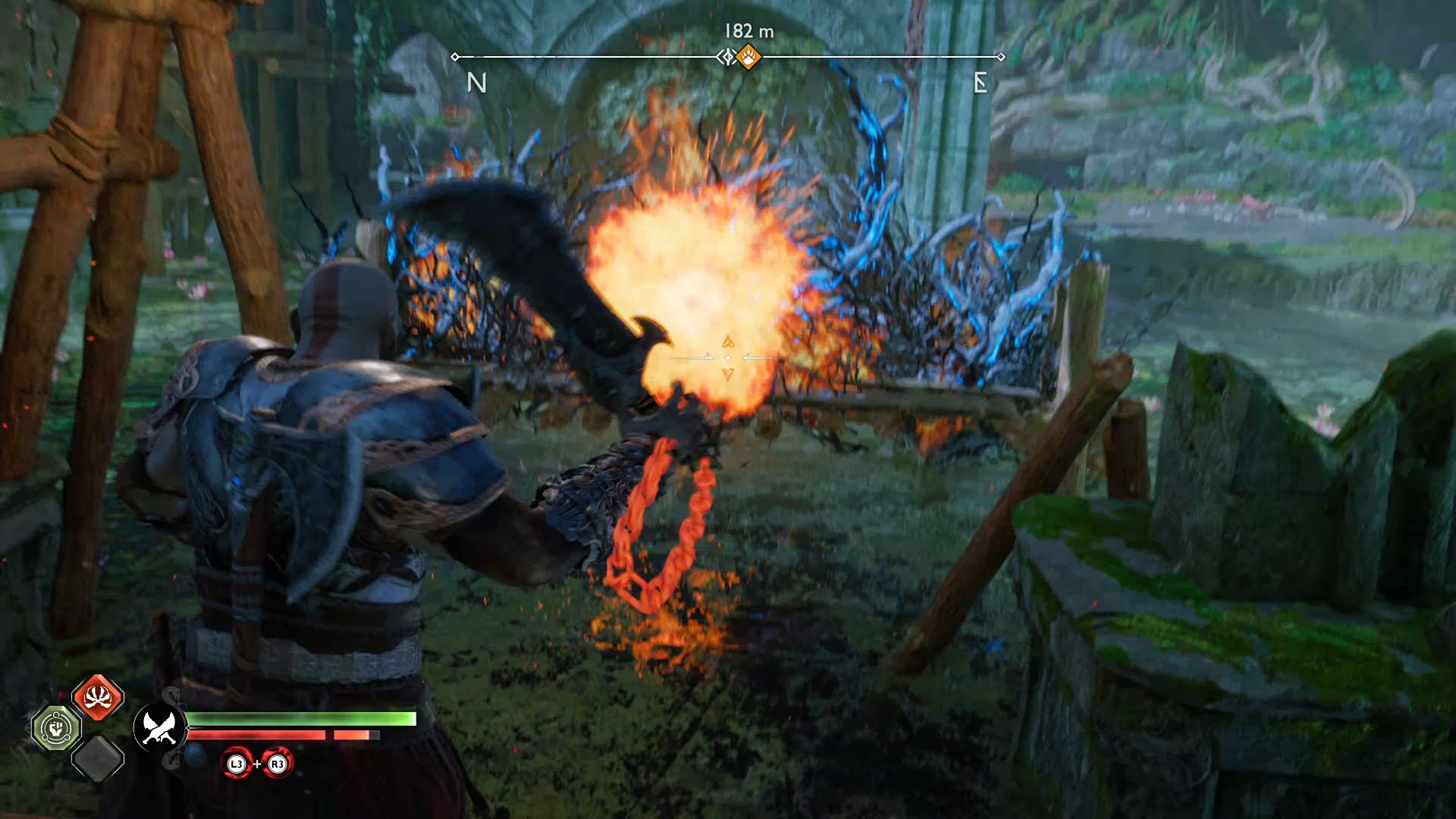 Having just killed the Forest Ancient, you are going to want to ensure that you have collected all the valuables that it drops. Once you have cleared out the area and collected any stray healthstones to top up your vitality, it is time to move on. Move through the fallen structure. You will find yourself on some decrepit docks. Burn the brambles blocking your way, then hop across. 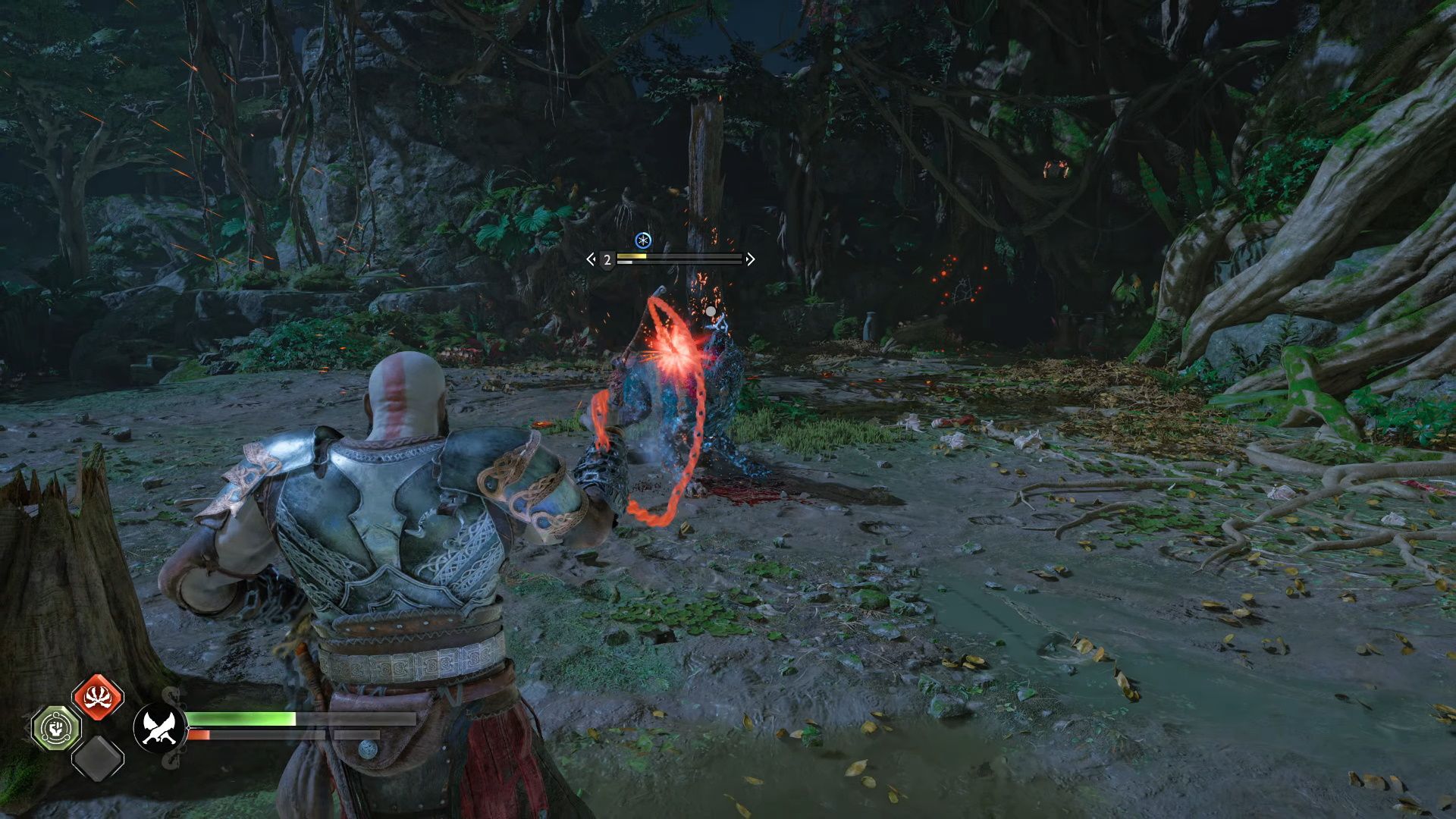 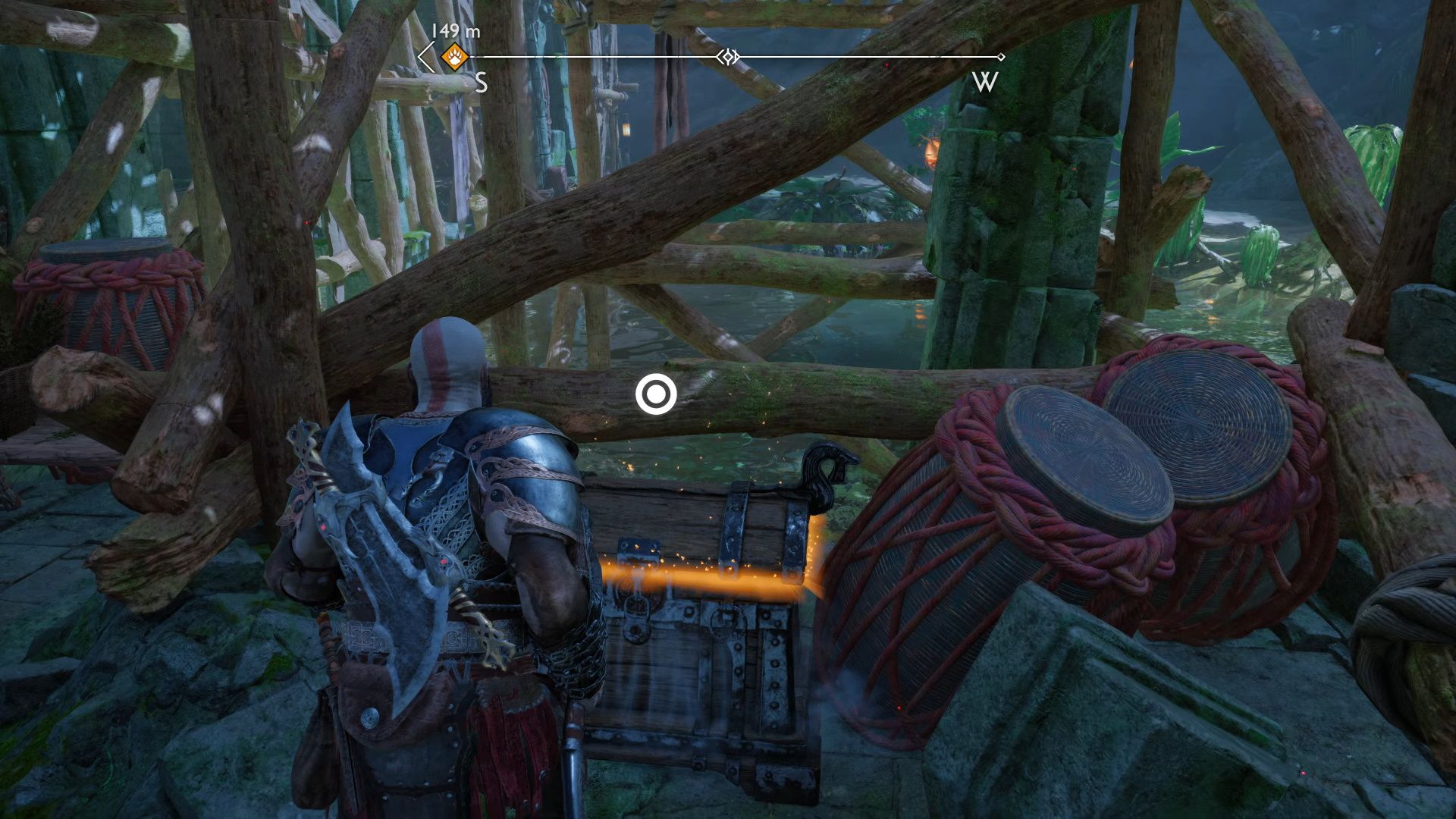 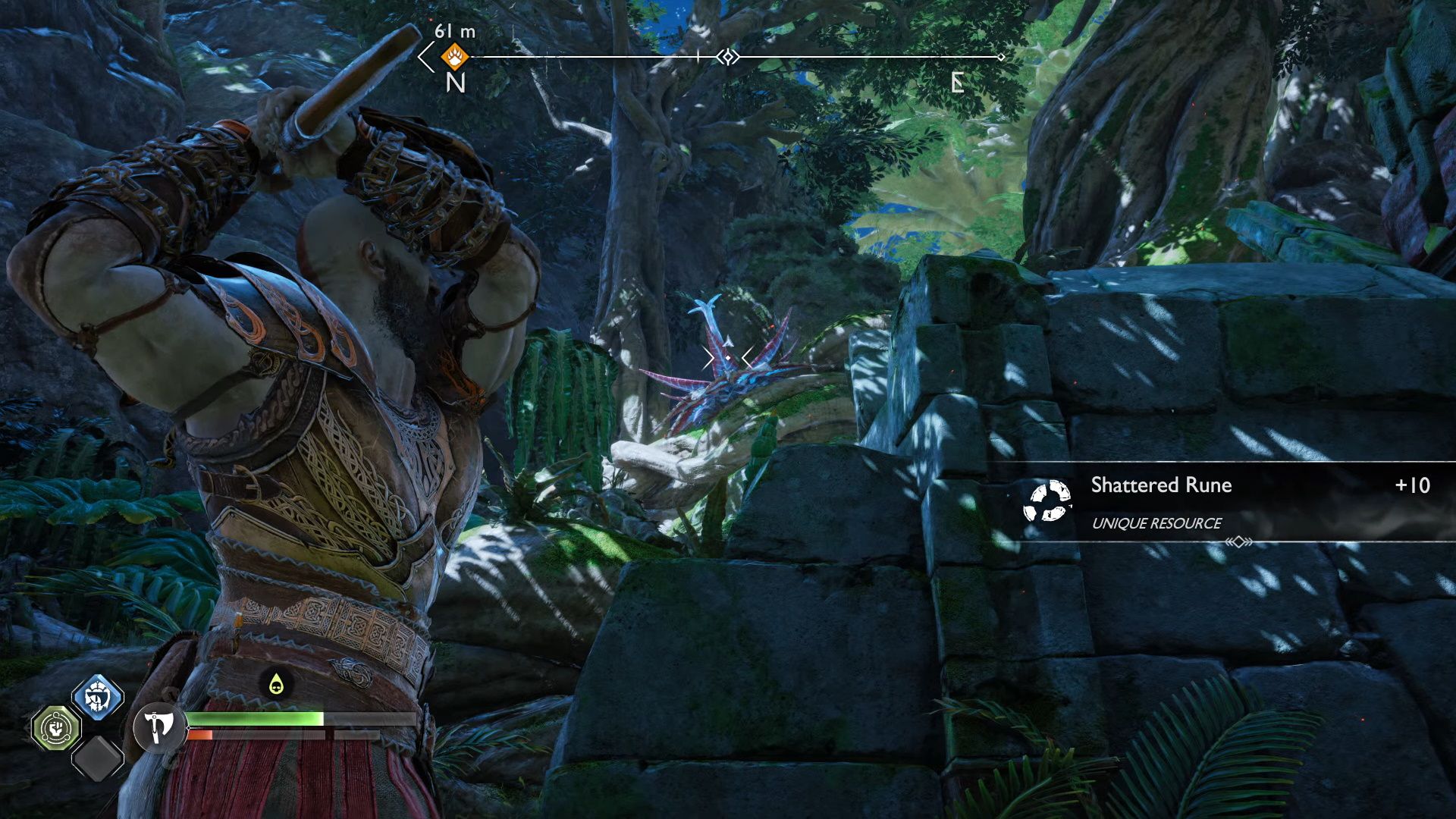 Once you get across, you will fight a pack of Gulons. There are a bunch of them, but there are also some handy interactable objects scattered around the stage to use. Once you clear the Gulons out, there is a treasure chest up against the stone structure. Now move through the cave. As you enter back onto the main path, you will find that there are new poisonous plants. Not only will you still have to contend with the inflating poisonous plants, but some will spit acid at you now. The way in which you deal with them hasn't changed, though. Just give 'em the sharp end of your axe. 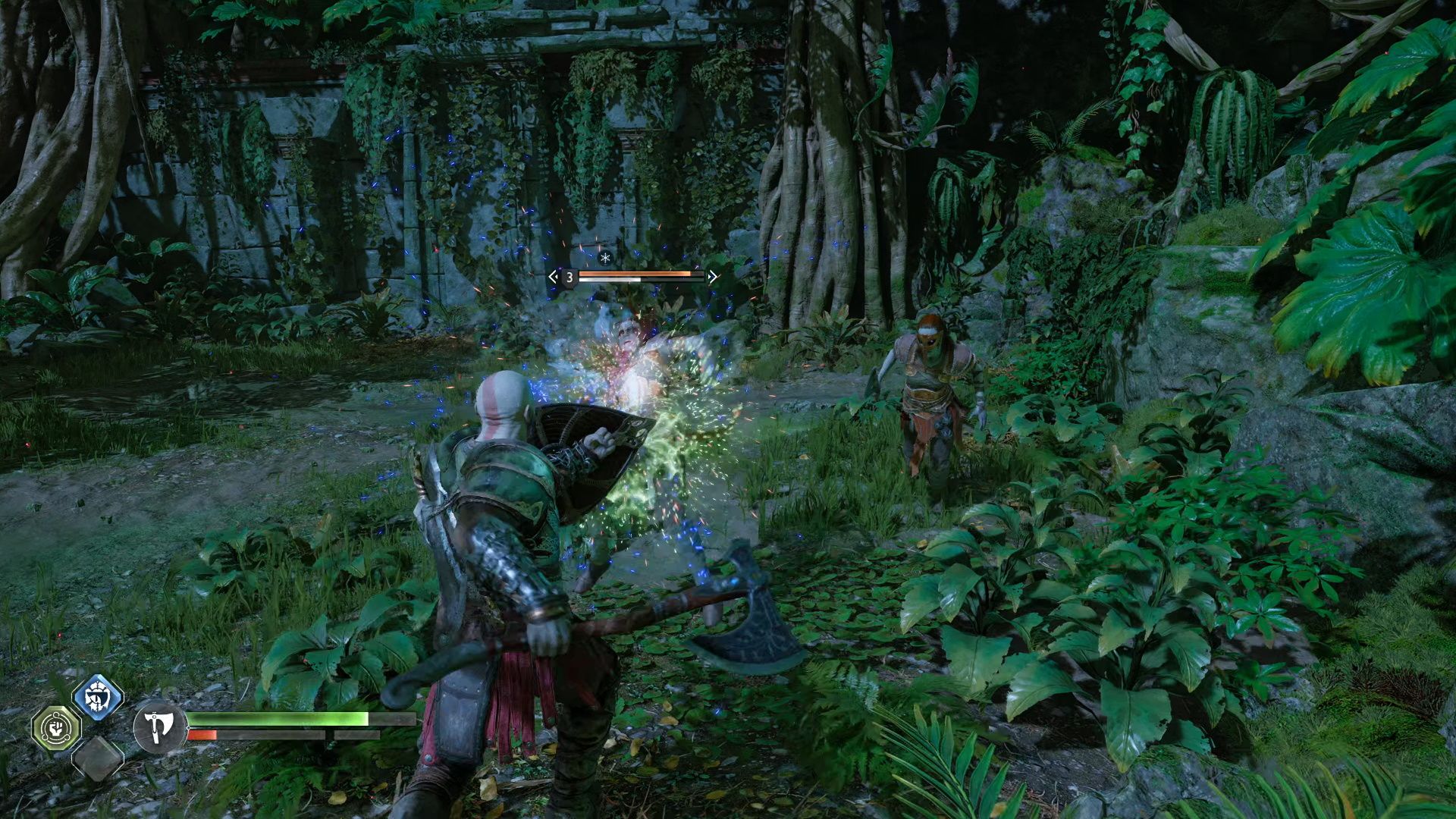 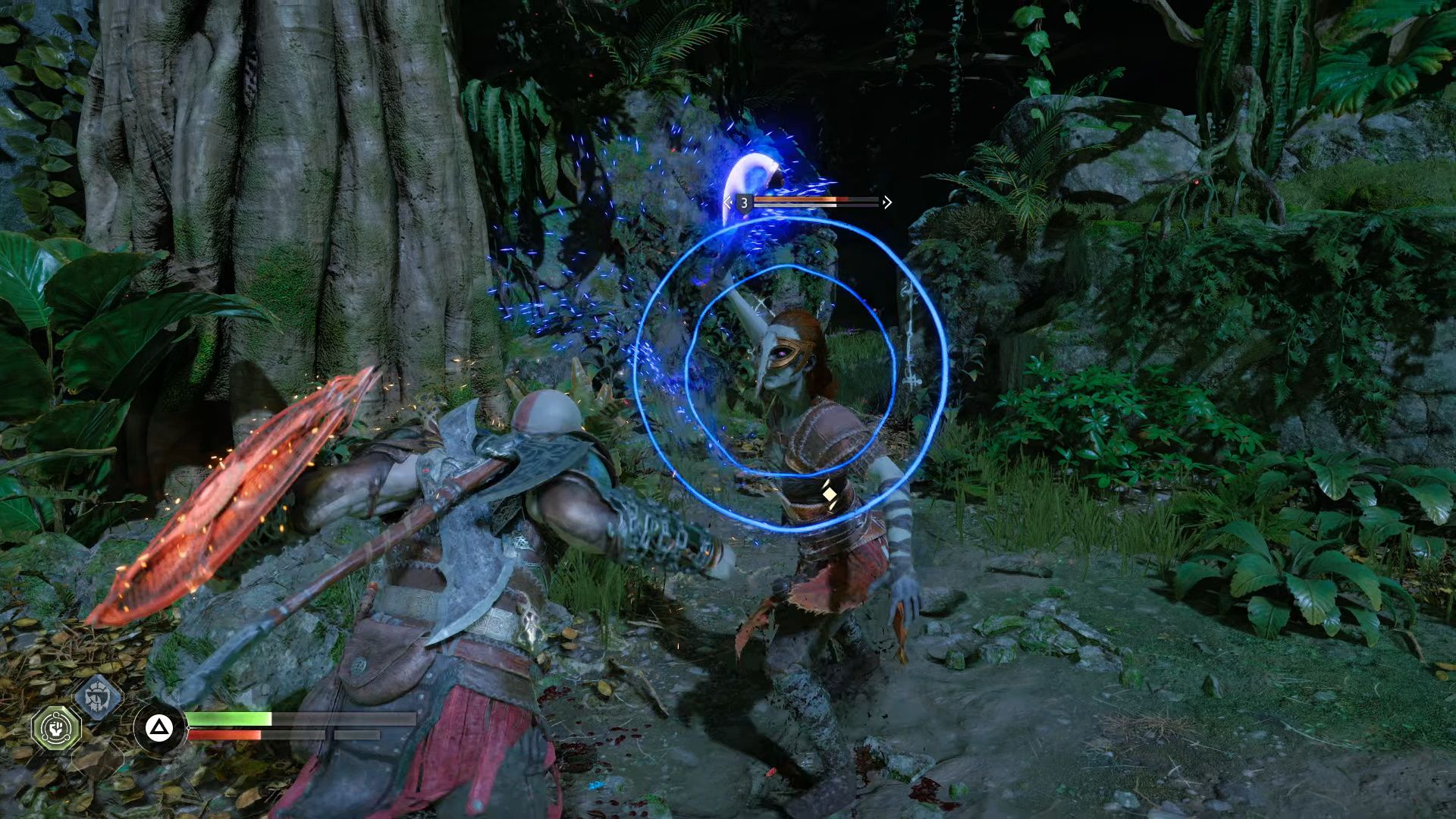 You will now enter into an area where you will fight two Einherjar. These warriors are similar to the ones you fought in the Jarnsmida Pitmines in that they have attacks that apply the Bifrost effect. They primarily attack with parryable swipes of their axes. They can raise an ephemeral shield. But if they do, just give them the ol' shield bash. In general, look for the parry, raise their stun, and finish them off with an execution attack. They do also have an attack that has the blue indicator which, of course, means that a shield bash will do extra stun if you disrupt them.

Just a reminder, in case you have forgotten, the Bifrost effect will color a large section of your health bar a purple color. It will slowly recover and turn back to green. However, if you get hit before your health recovers, you lose anything that is currently purple. One thing to note is that using one of those healthstones lying on the ground will undo this effect. 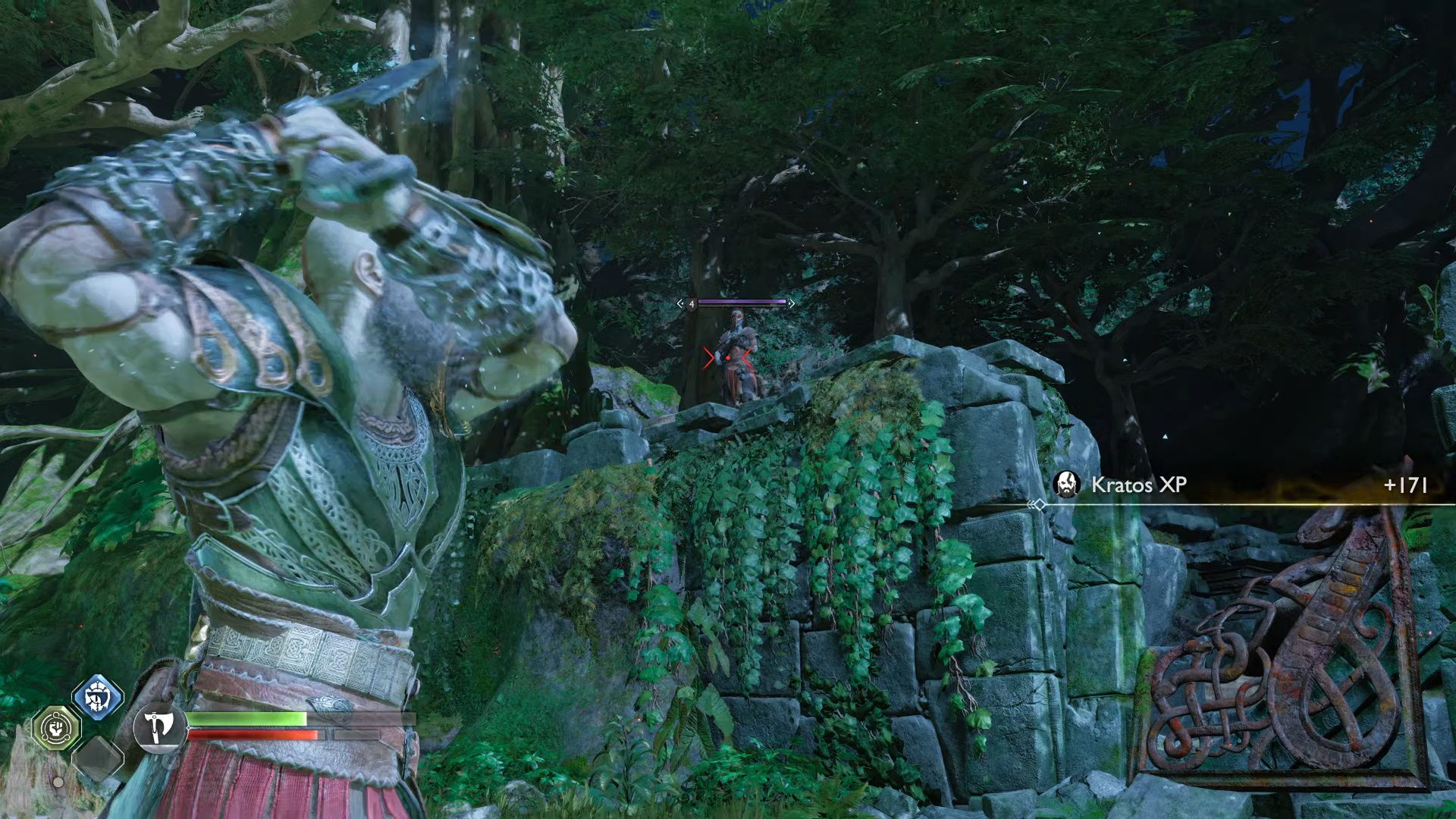 The archers, on the other hand, are a real problem. Their attacks do a huge amount of damage. When you are fighting the standard troops, try to do it on the other side of that giant tree. That will help shield you from their deadly arrows. Of course, once you clear out their melee buddies, they become far less threatening. Once you finish off the lot on the ground, you will only have to take care of an archer. Well, actually, you won't even have to do that, as you will be interrupted by a mid-boss of sorts. 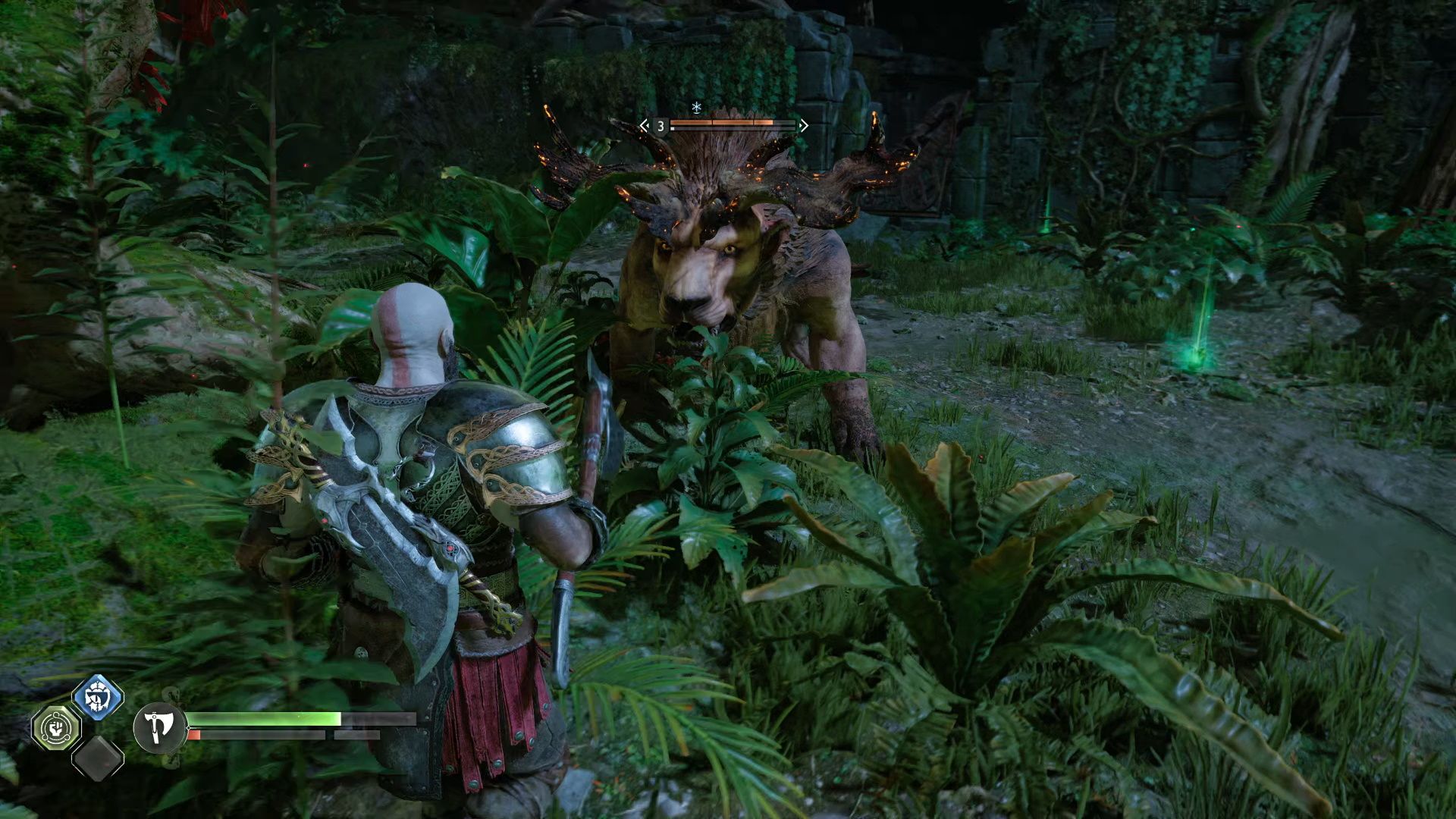 The Gradungr isn't quite a boss, but they are several rungs stronger than your typical foe, so we're going to give them that distinction. There are three main attacks you need to worry about. When the red indicator appears, that means the Gradungr is about to fire off its unblockable projectile. If you roll to the side, you will be fine. However, having the tree in between you and the Gradungr doesn't appear to stop this firey wave, so you are going to have to dodge it fair and square. 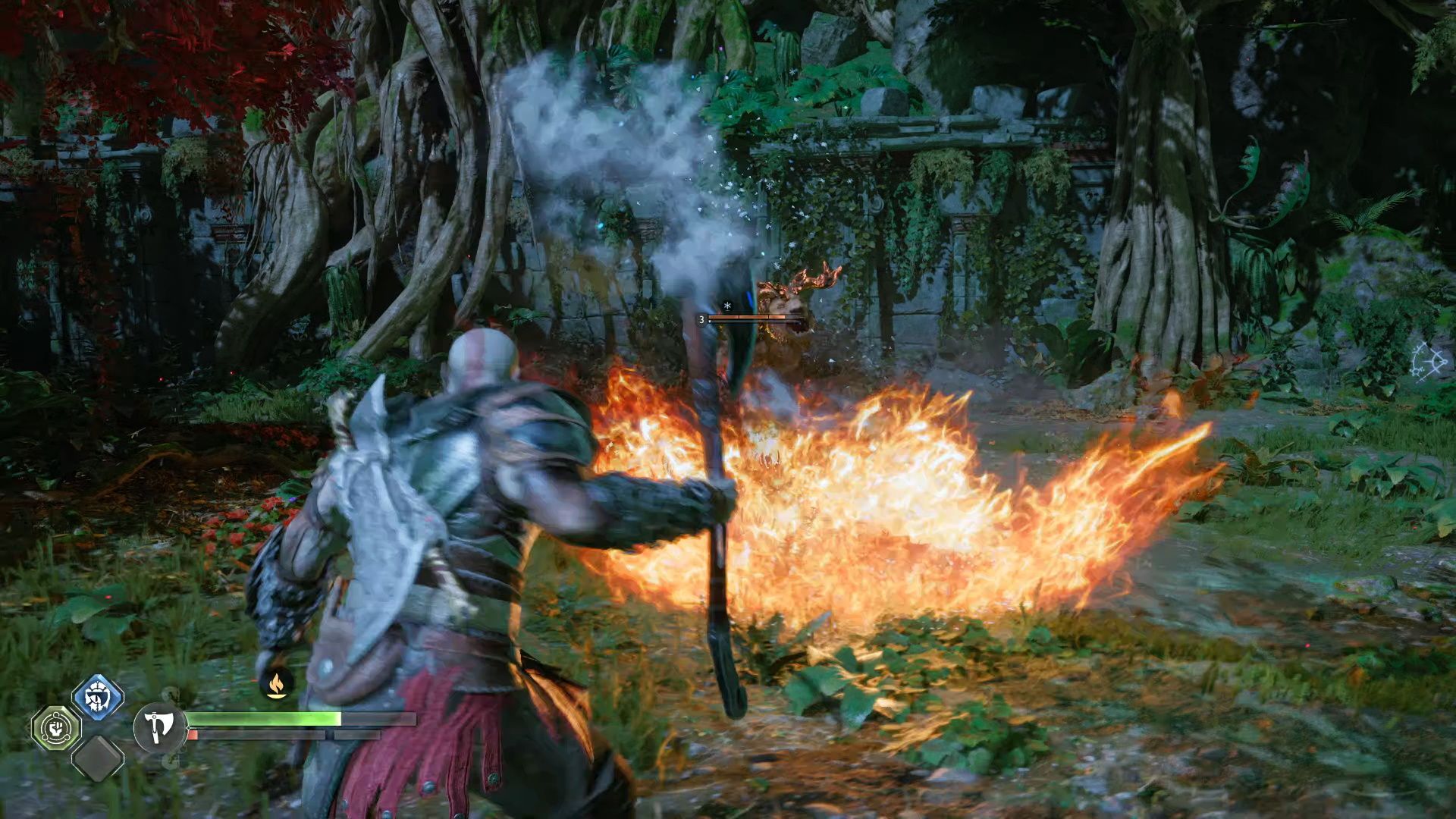 Its other main attack is an upward thrust. It will do two of these in a row. Both attacks have a yellow border, so you can parry them, but you will be staggered if you try to block them. Lastly, it will give itself a shake and make fire appear all around it. When you see it starting to breathe fire, just dodge away, and you should avoid this attack every time. In general, you are going to look to keep your distance, land your axe throw, and dodge its projectile attack. 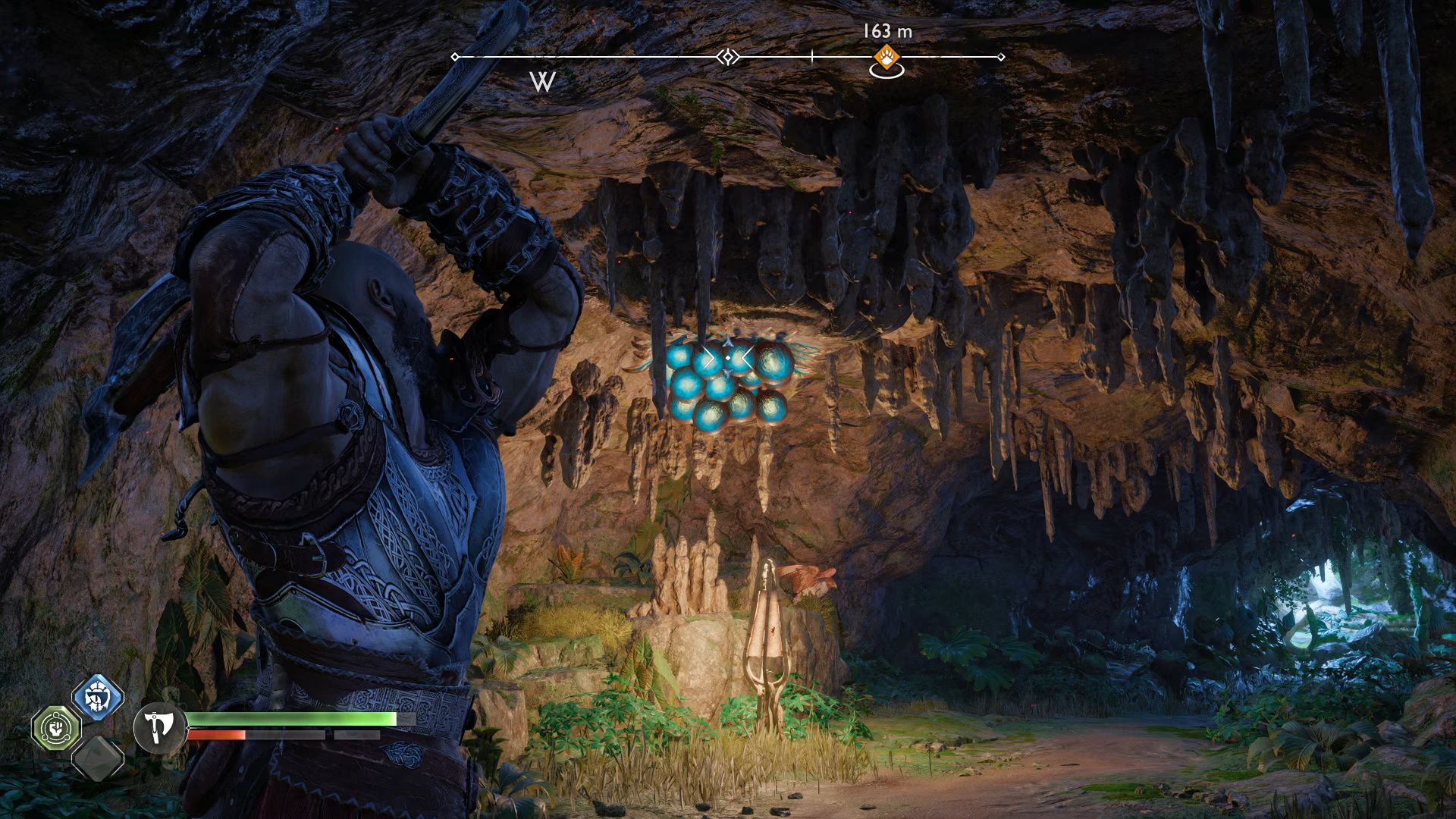 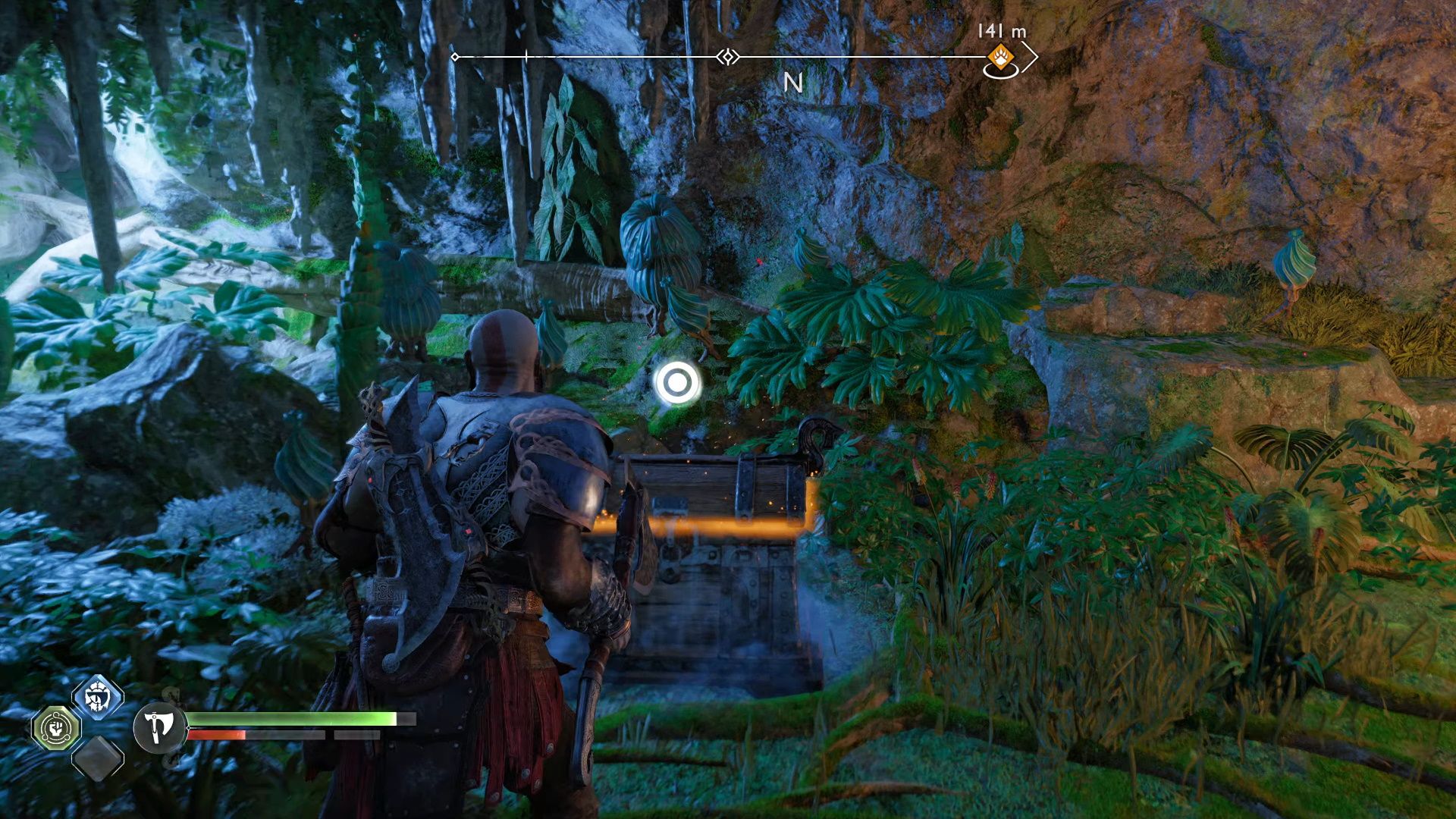 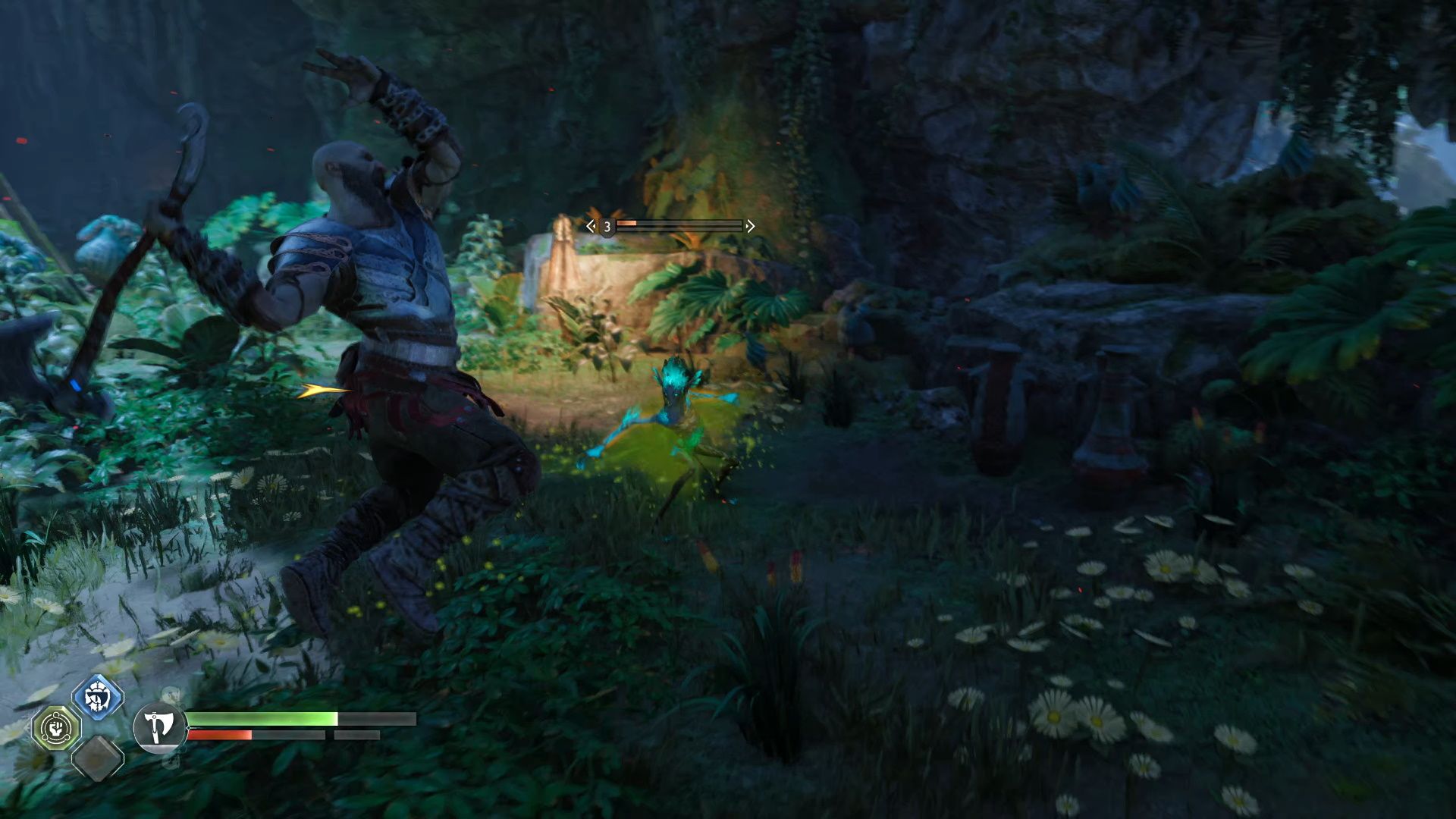 Once you beat the Gradungr, look to scale the rock wall near the edge of the cliff. Climb down, grapple across a gap, and you end up in a cavern. There are a bunch of poison plants here, so stay on top of those. You will see a treasure chest on the main path, there will be a poisonous plant on your right, just ready to ambush you. Now, you will enter into a cavern with Draugr and a Nokken. You need to kill the Nokken before you can damage the Draugr. Needless to say, you are going to want to rush the Nokken. Once you kill it, you just have two take out two Draugrs. No biggie. You will now enter The Abandoned Village.

You are coming up on a Draugr Hole. You will want to have your Spartan Rage ready for that fight. So, don't pop it here while fighting a few normal Draugrs. 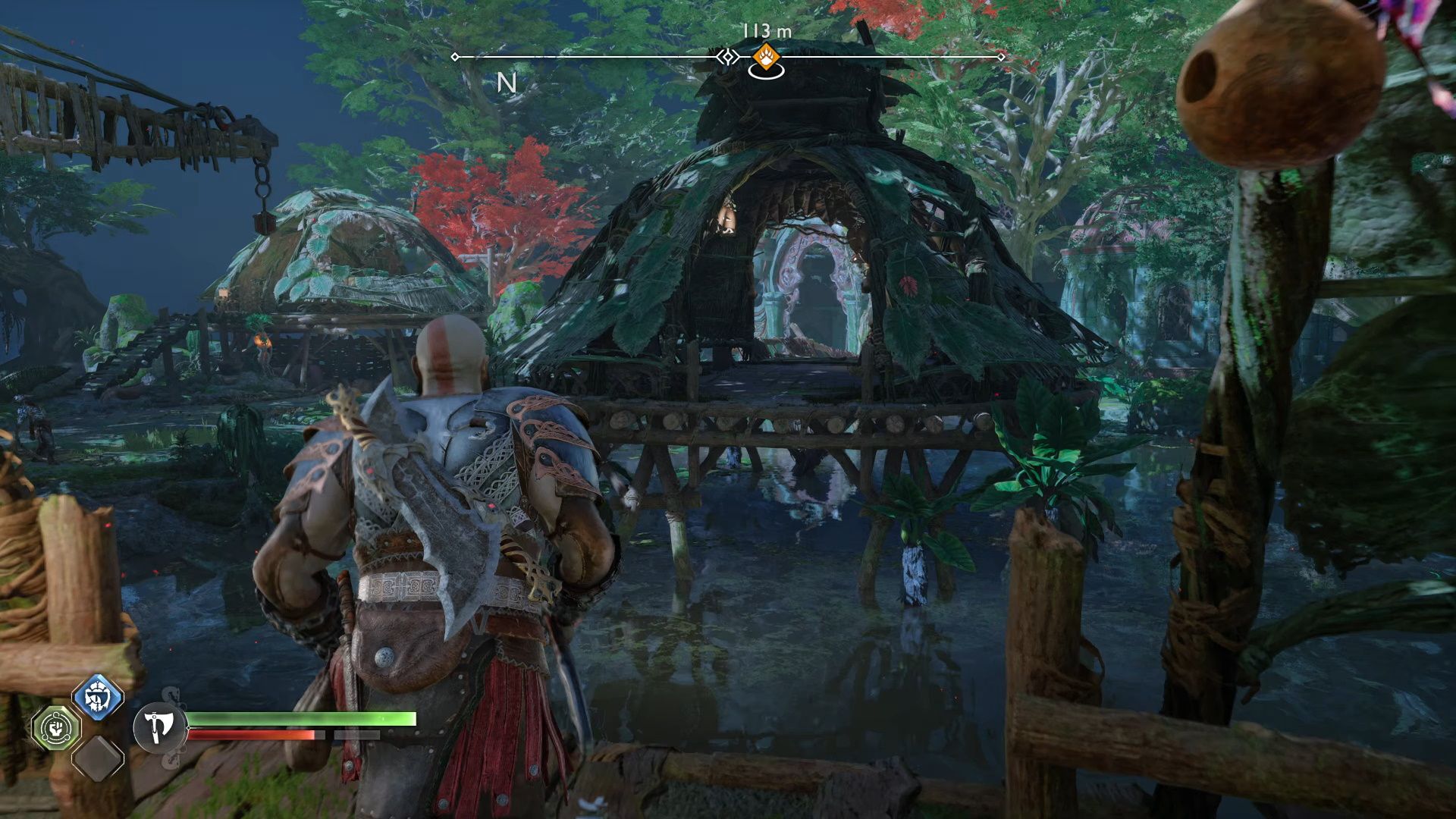 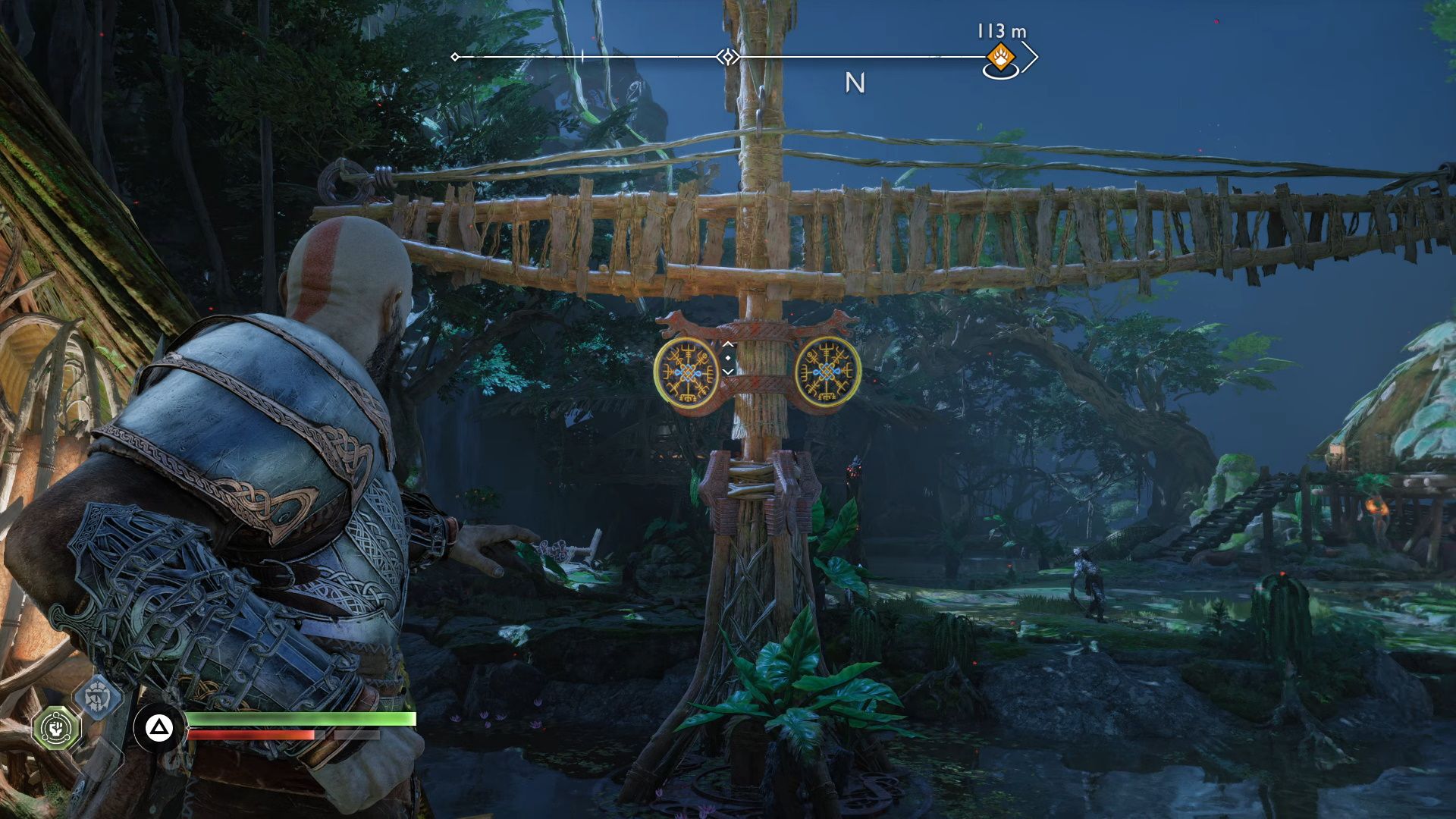 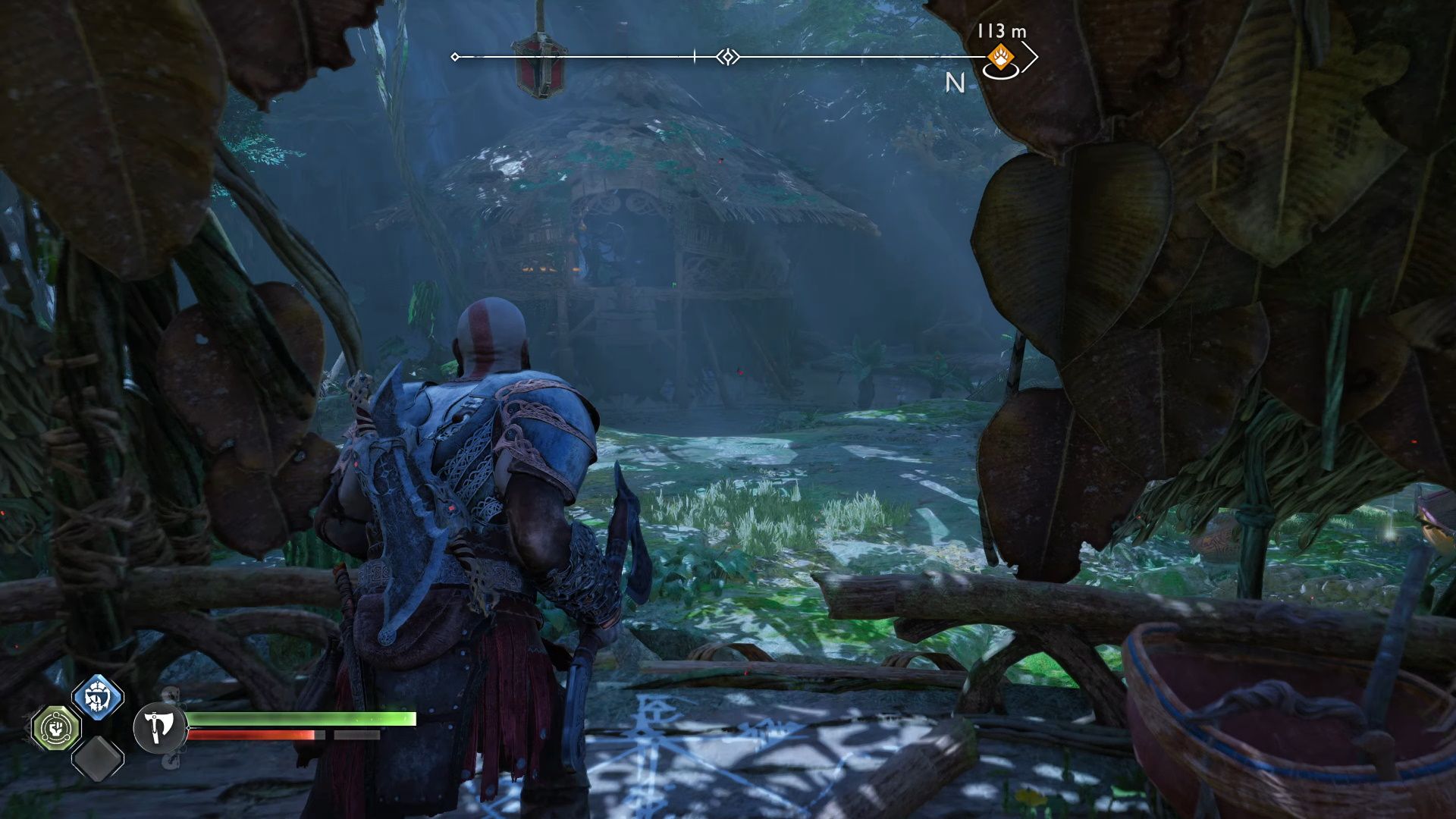 Once you enter into The Abandoned Village, there will be a crane on your left. Hit the targets to get it to swivel the grappling point in front of you. Hop across using your Blades of Chaos, but don't continue forward, hit the target on the crane again so that you can enter into the heart of the Abandoned Village (the left exit in the house you jumped to). Now, grapple across. Take a deep breath, and cross the bridge on your left. We're going to go clear out a Draugr Hole 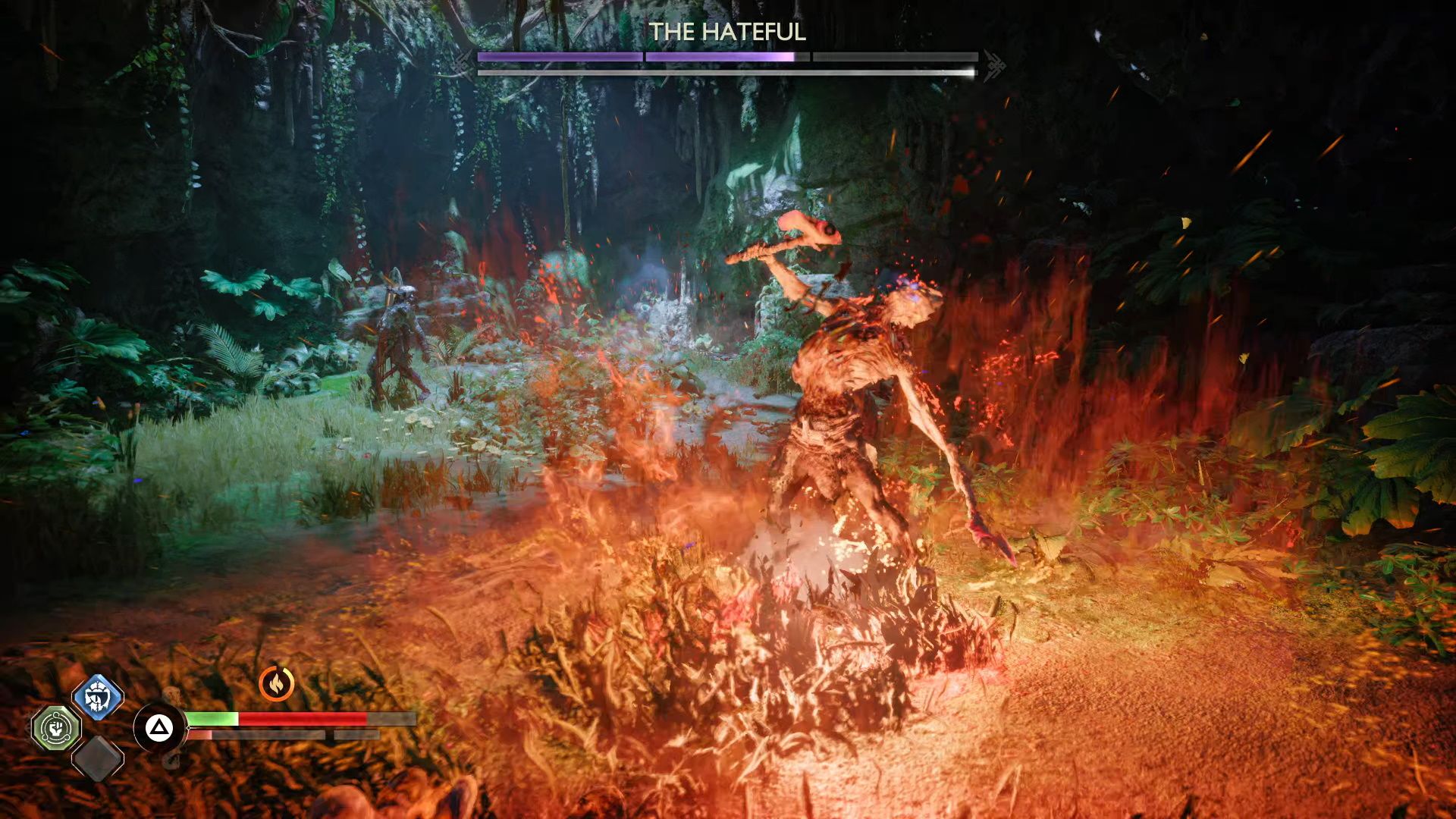 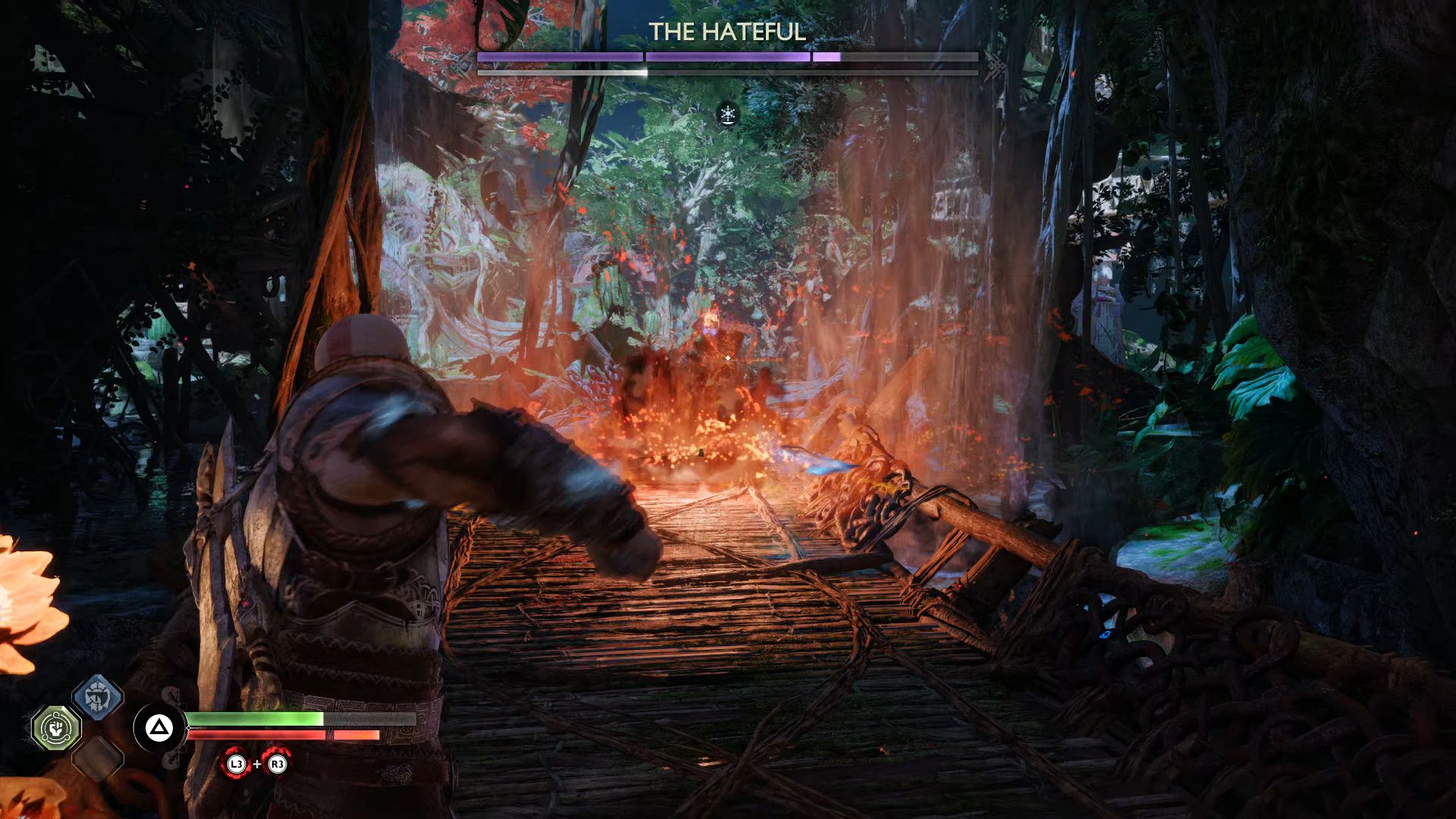 Hey, it's your old buddy: The Hateful. He still has all his old tricks, the unblockable double uppercut attack, the fast, hard-hitting lunging attacks, and a general abundance of speed. However, this version of The Hateful has a unique quirk that is going to be the death of you until you figure it out. When it stops, starts screeching, and begins to pulse red, the next attack that lands on it will cause a giant explosion. This means that you absolutely cannot hit it with a melee attack if it is glowing. This will often be the death of you, as it does a tremendous amount of damage. So, if you see The Hateful writhing around and starting to glow, you need to land a ranged attack. 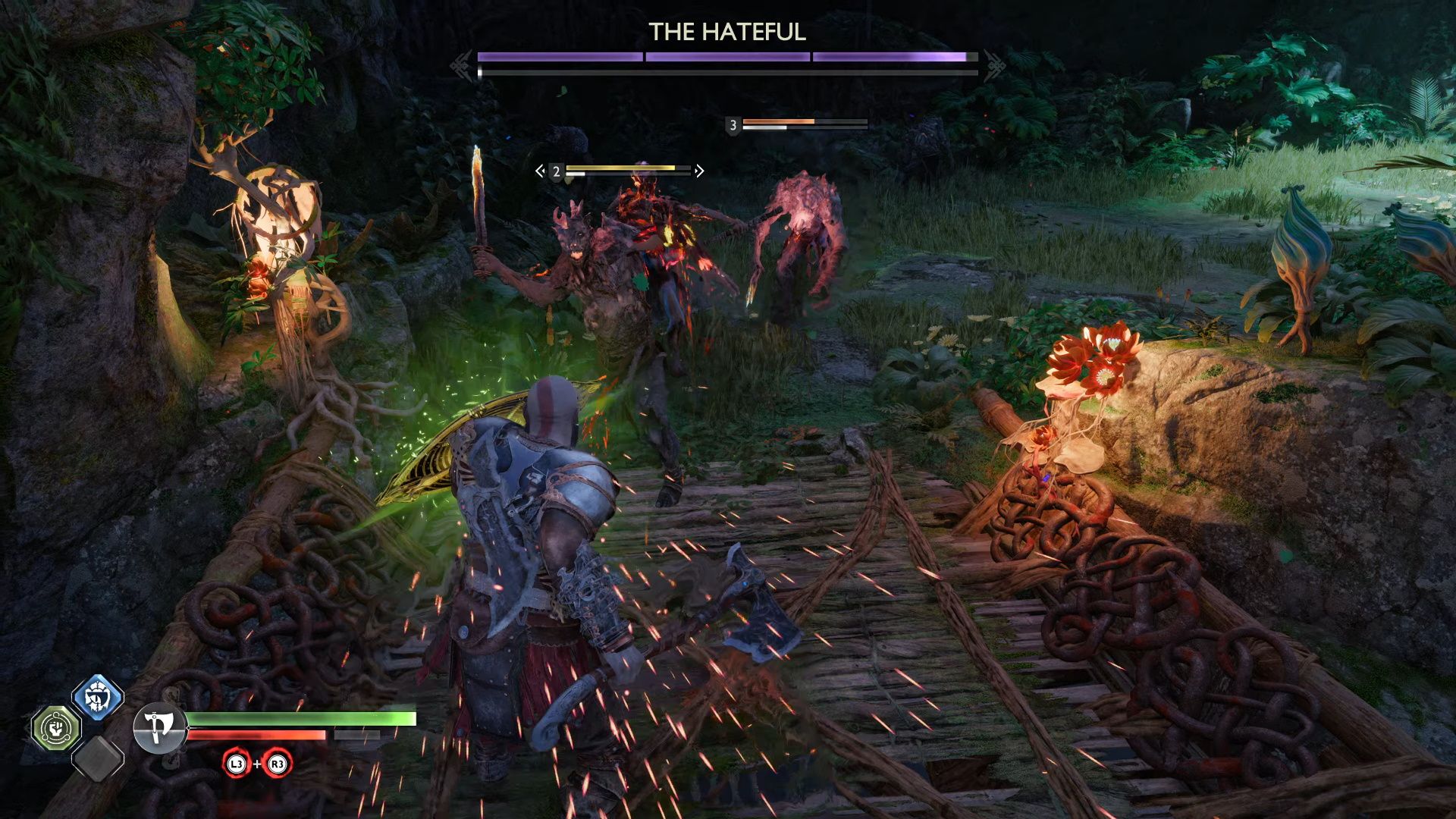 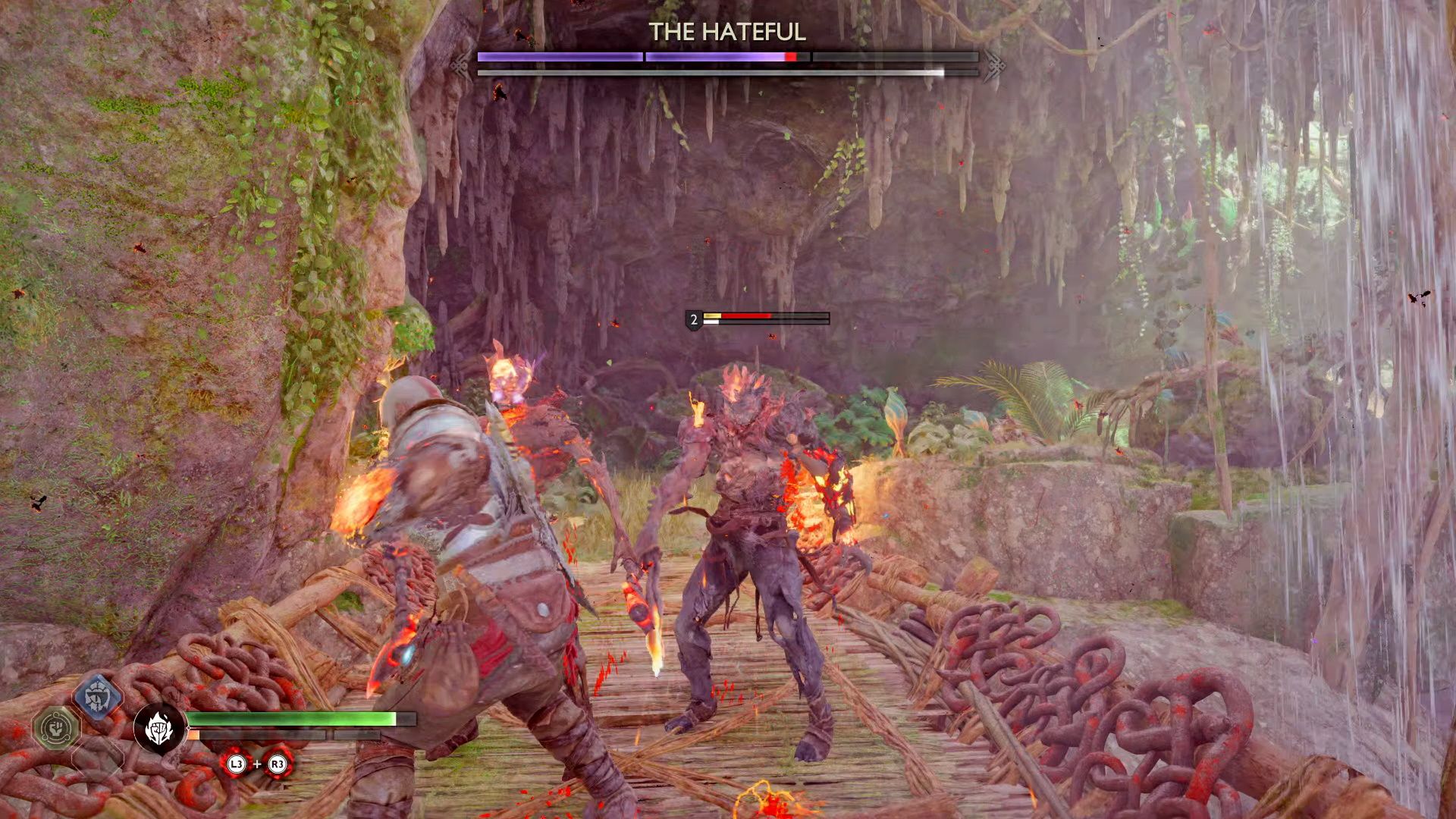 On top of all that, he is going to have two buddies with him. We found that the best strategy was to back away, and attack them as they come across the bridge, bunching them together. Taking care of the two lesser-Draugrs will make things far simpler, as The Hateful is a handful without his friends ambushing you. Hopefully, you held onto your Spartan Rage as that will be tremendously useful.

If you have the Draugrs all bunched up on the bridge, your Spartan Rage punches will hit all of them. This is tremendously helpful, as you can deal damage to The Hateful while potentially taking out his companions. 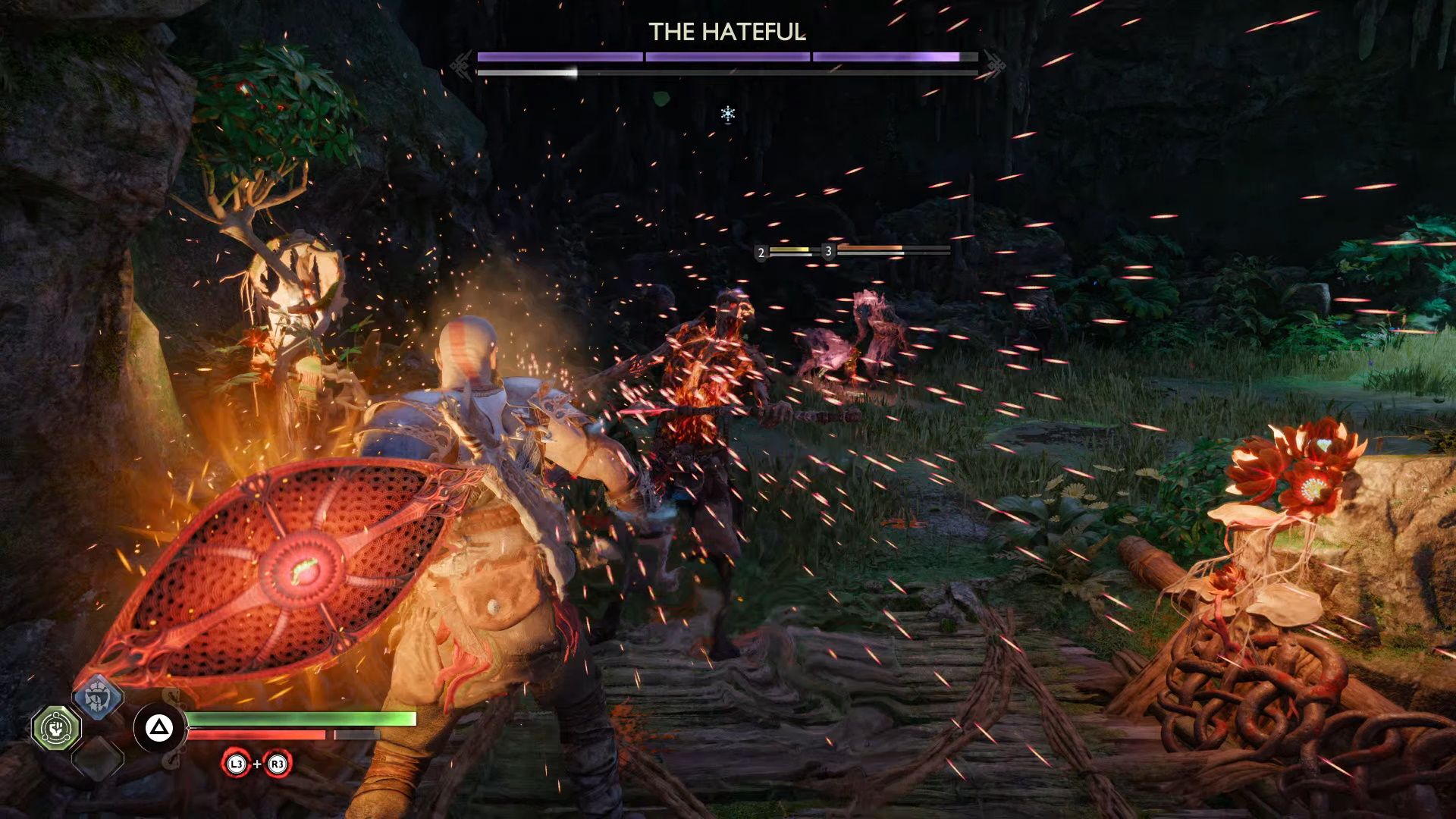 So, your goal is to kill The Hateful's companions, parry The Hateful's attacks, build up stun, deal damage, and when it powers up its fire attack throw your axe at it from a distance. This all sounds a lot easier than it actually is, as The Hateful does a ton of damage, is fast, and can be unpredictable. Keep at him, and you will eventually finish him off. 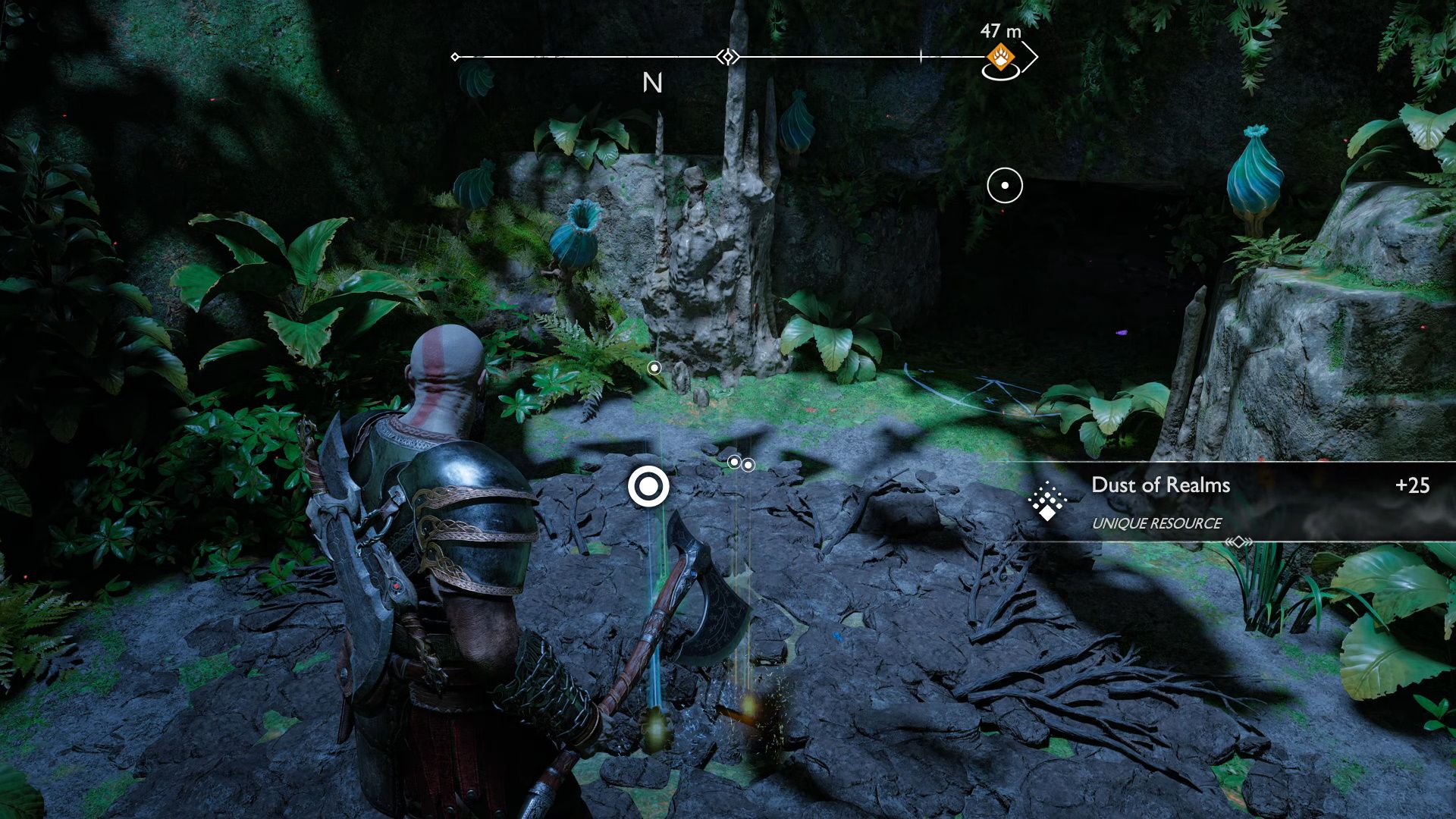 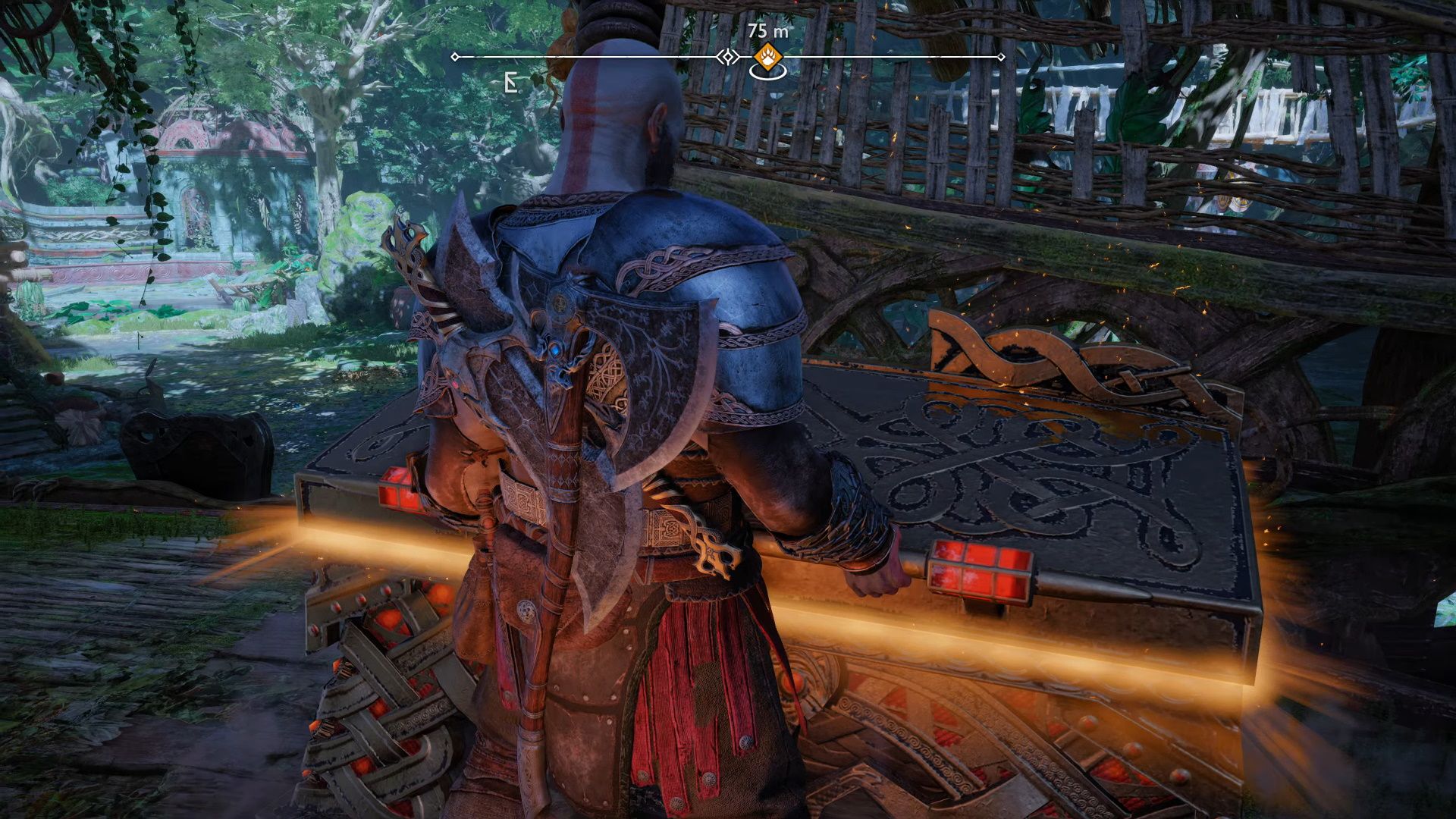 Once you have finished The Hateful off, go collect all the goodies from the Draugr Hole. Once you do, move through the cave behind it. The cave will give you access to a house with a legendary chest inside. Open it up and grab the shiny new Shield Rond. 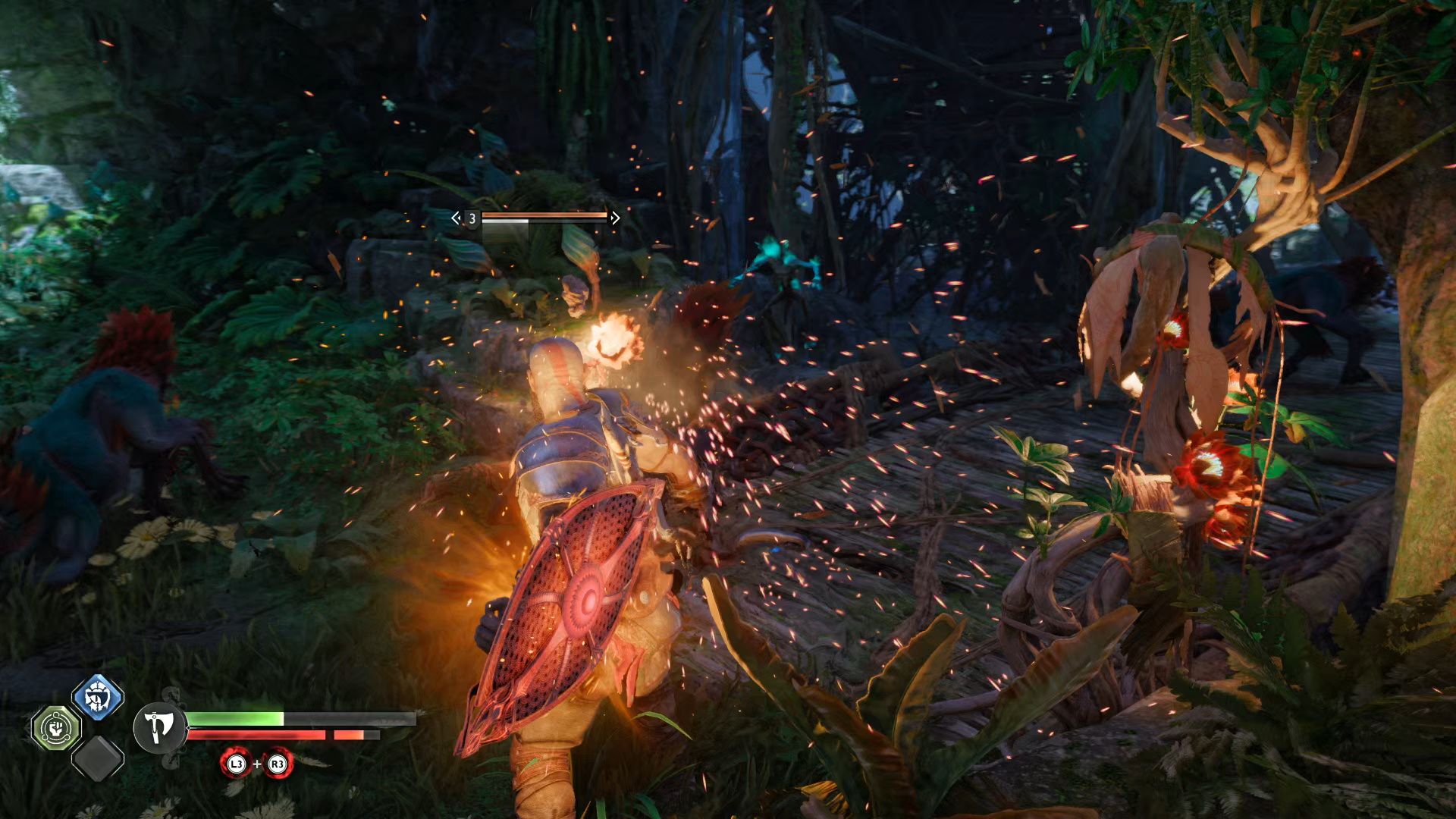 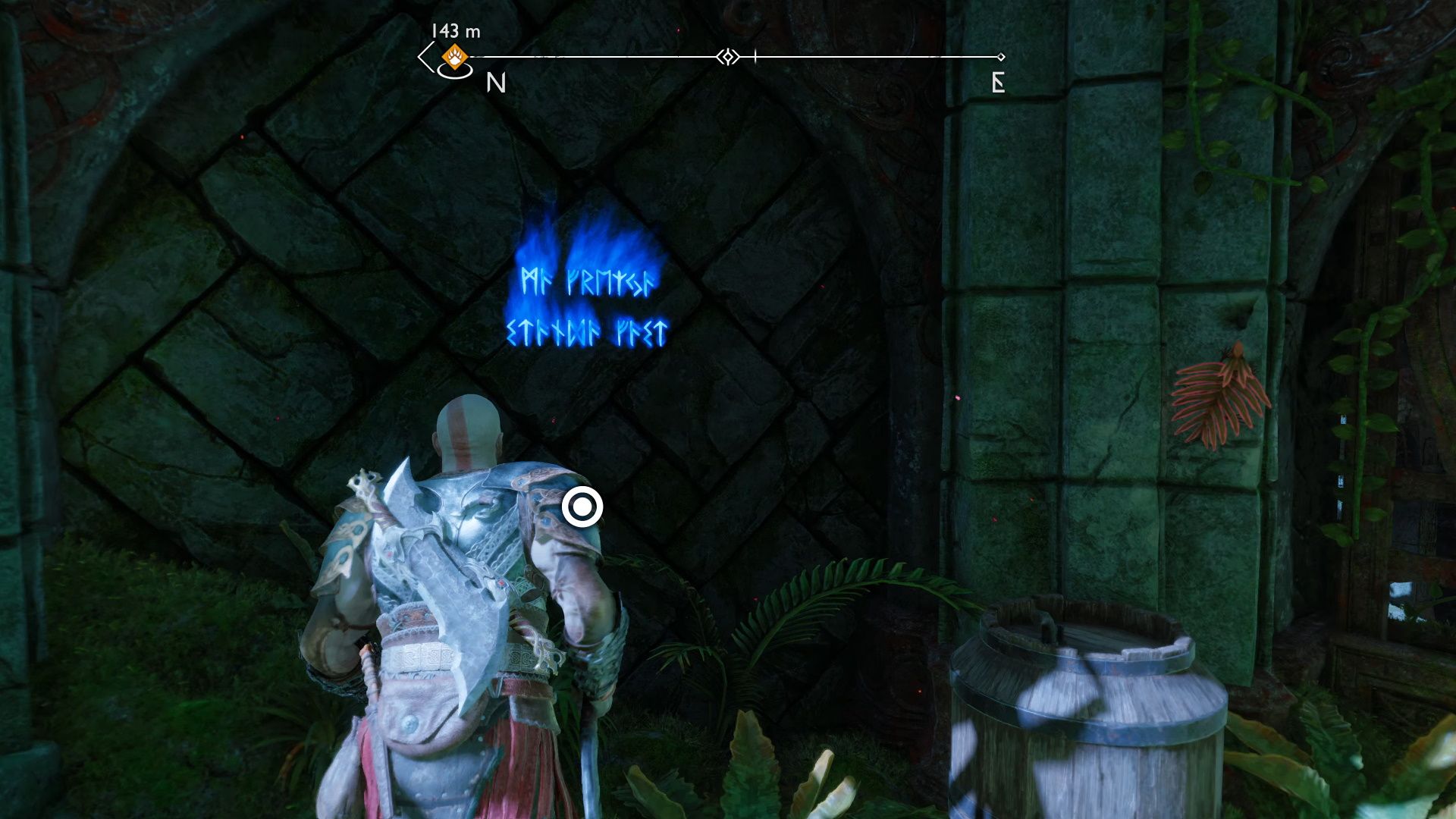 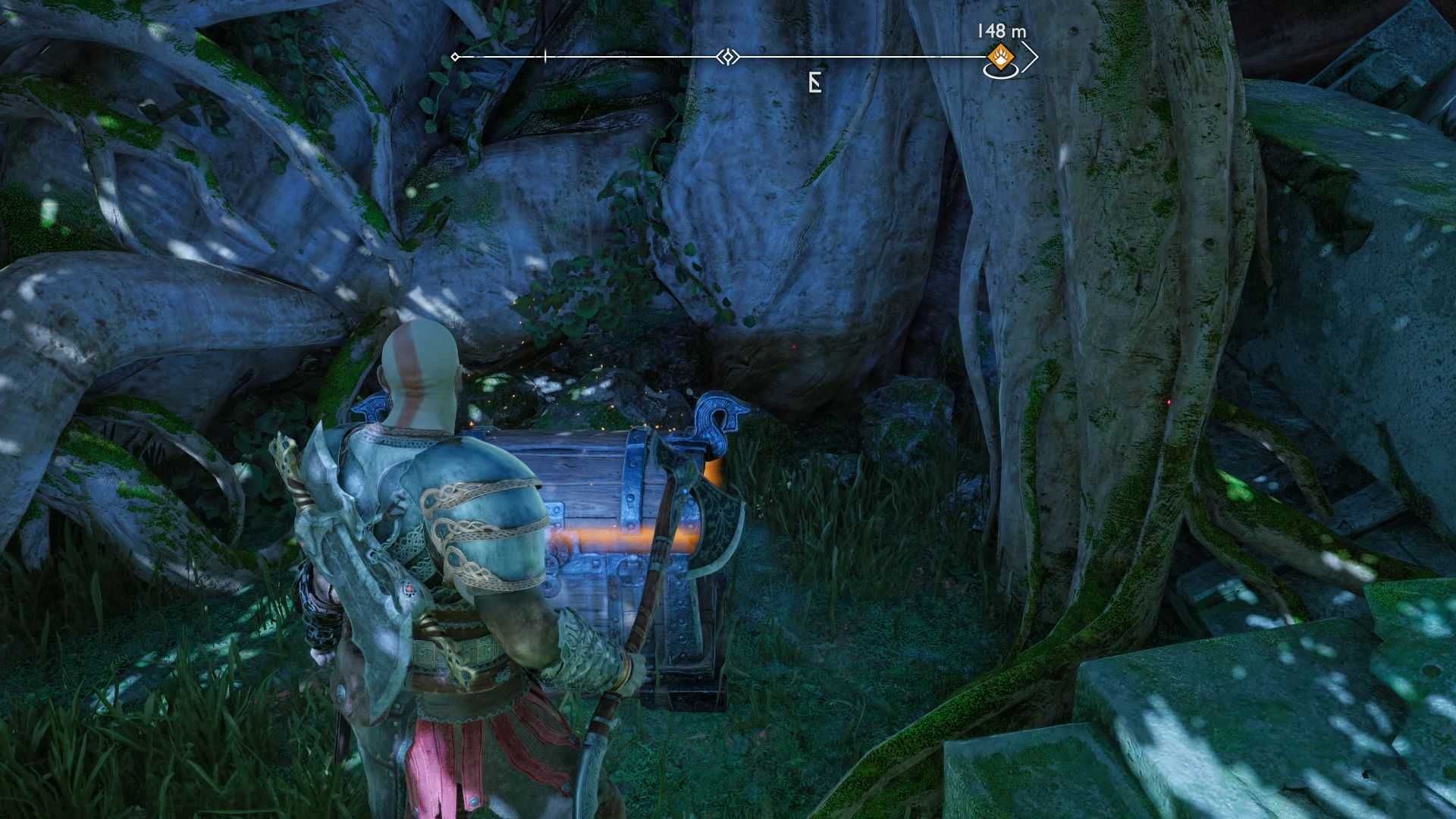 Now, hop back down into the Abandoned Village. You will have to fight some Nokkens and Gulons. Once you kill the Nokkens, you can use the bridge against the Gulons in the same way you used it against the Draugrs (to bunch them up). There is a nearby house with a rope that you can slide down to get back to the main path. Once you do, go to your right and read the Lore Text in the nearby building. There is a treasure chest to the left of the Lore Text, wedged in the back corner.

There is a lot more to the Abandoned Village, which will be covered in the subsequent guide! Look forward to it, it's a doozy!