Despite the mixed reception, I’ve been enjoying my time with Gotham Knights. It’s nothing too unique as far as superhero games go, but I love pretty much anything to do with the Bat-family. The combat feels crunchy, its missions provide just enough serotonin as the numbers go up, and its interpretation of Gotham City is incredibly detailed and fun to explore. Being the IP lover that I am, that’s enough for me.

That being said, it has a massive problem with movement. Before release, everyone thought that Red Hood would control like a brick shithouse thanks to his massive frame, but it turns out that Nightwing, Batgirl, and Robin all move like tanks too. Running around somehow feels even clunkier than holding X to run in the Arkham games, and none of the unlockable traversal mechanics do much to help. Using a hang glider or teleporting sounds like an upgrade, but all it amounts to is holding down R2 and meekly floating around.

At least there’s the Batcycle to help you get around, right? Unfortunately, it’s the worst vehicle I have ever driven, or ridden, or whatever it is you do with a Bat-Cycle. It’s the slowest way to get around, feels awful to use, has no upgrade path, and fails in its only purpose of making travel speedier. 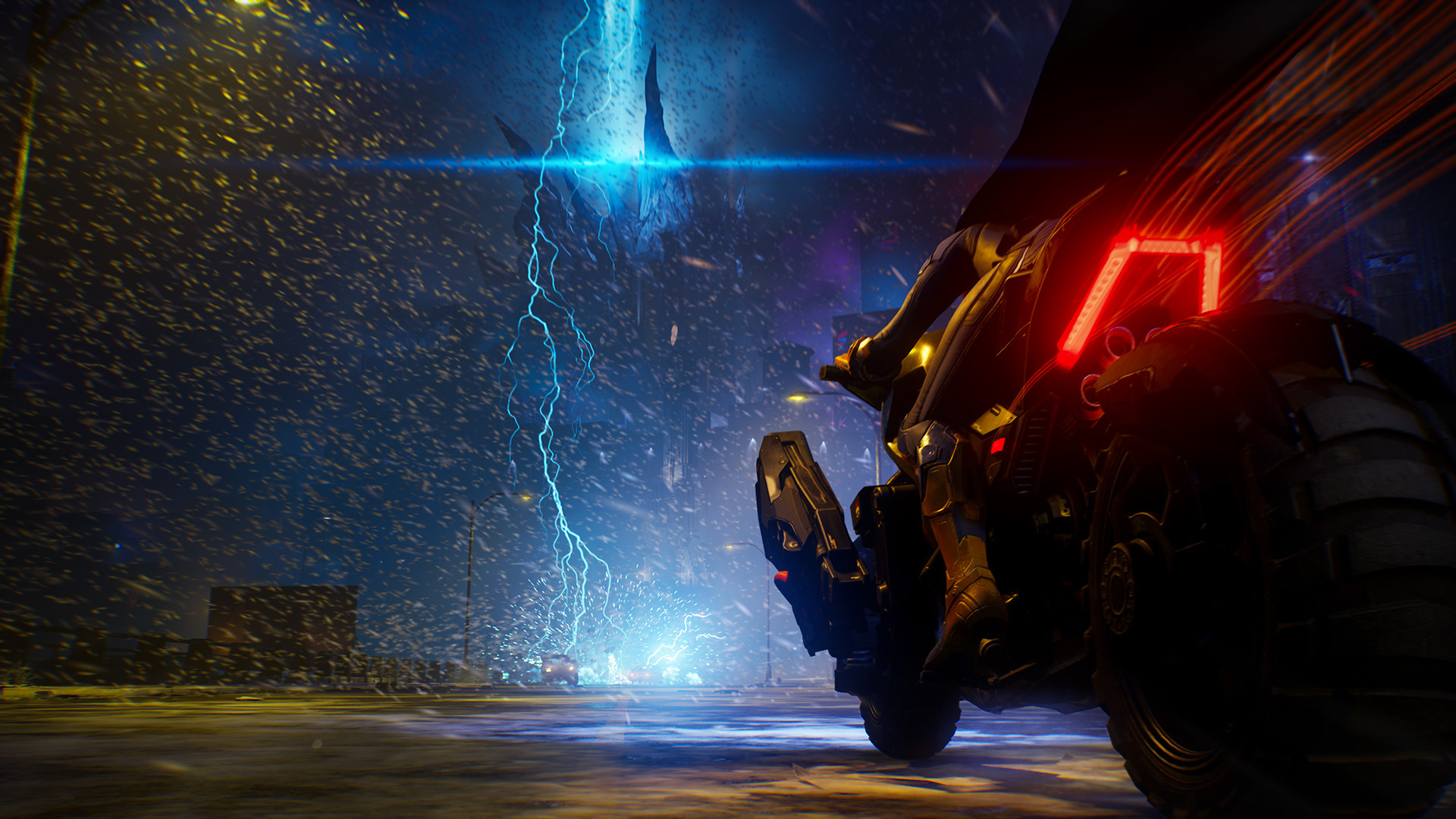 Gotham Knights has somehow beaten Arkham Knight for the worst implementation of a vehicle in a Batman game, as well as any other vehicle in the history of gaming. It’s even worse than Mass Effect’s Mako.

Looking at the Batcycle, you’d imagine you can get some decent oomph out of it and race around Gotham, but it’s barely faster than the cars on the road and takes a good five seconds to overtake them even at max speed. That max speed is capped too, as there’s no way to upgrade the Batcycle beyond giving it some different skins, which feels weird considering the focus on GaaS-style customisation and upgrades throughout the rest of the game.

To make matters worse, the developers try to make you think it’s the fastest bike in the universe, using speed lines in the corners of the screen to simulate speed and having the brake lights trail behind you like you’re moving faster than the speed of sound. It’s an illusion that’s easy to break simply by moving the camera to the side and realising that you’re on a Bat-Moped instead of a Batcycle. It’s like the opening scene of Shrek the Third where Prince Charming looks like he’s riding on a horse, but is instead in a play with a cheaply moving background. At least it was supposed to be funny in Shrek.

By this point, the Batcycle has already failed its main purpose of getting the player around, but it’s somehow made even worse when it’s used outside of traversal. One of the side mission crimes in Gotham Knights is a robbery that has you racing behind a mail truck as bombs are chucked out at you, forcing you to Bat-Cycle for your life. 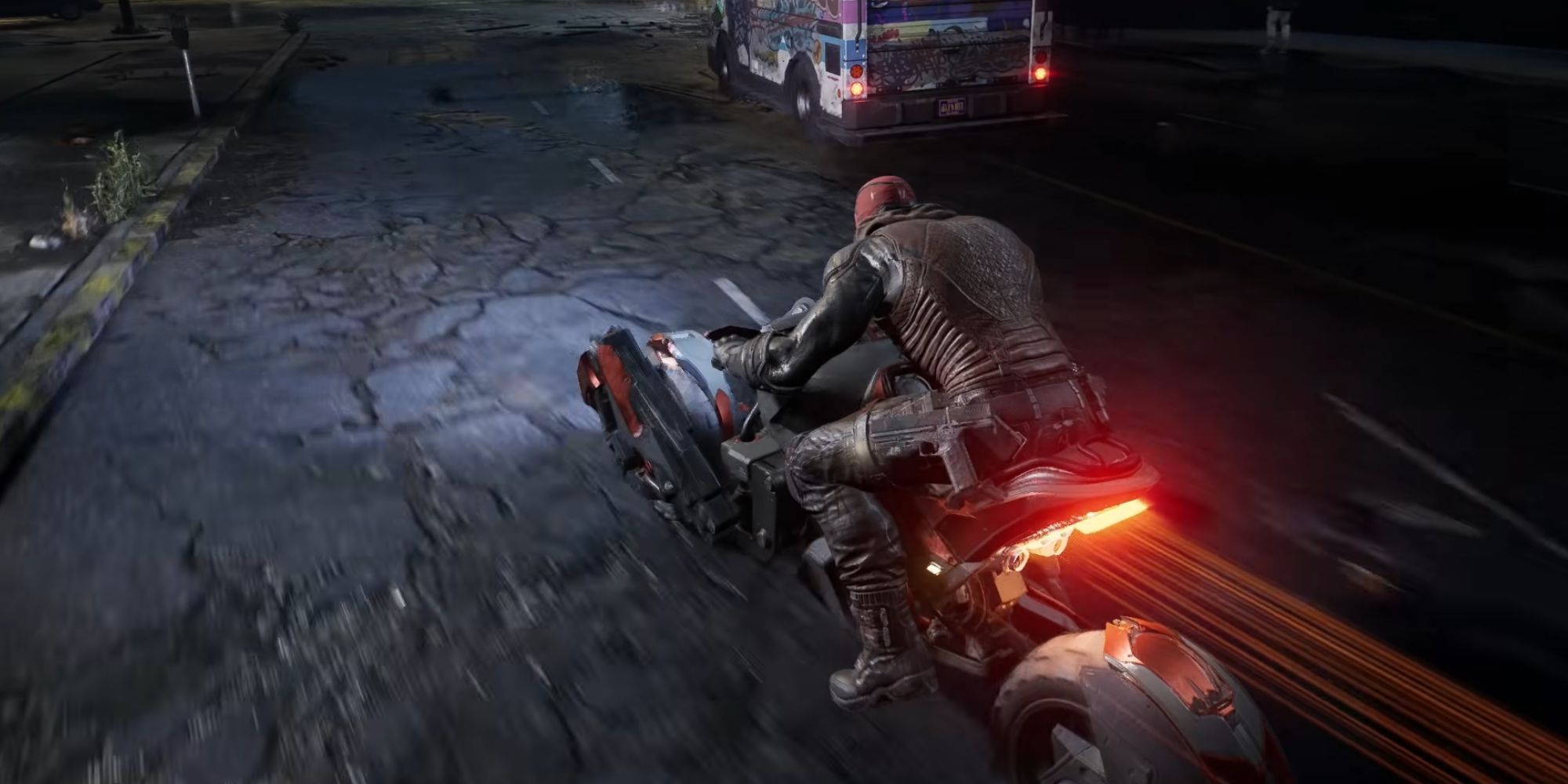 Beyond being incredibly unoriginal, having to use the Batcycle for something that’s supposed to be tense really highlights how slow and unwieldy it is and takes away any tension from the scene. A vehicle designed by Bruce Wayne should be able to catch up to the Royal Mail van lazily driving down the street, but it can’t and it ends up being the one crime I always avoided.

There’s an easy fix for most of the Batcycle’s problems – giving it a boost ability. Sadly, more than ten hours into Gotham Knights, I’m almost certain it doesn’t have one, which is a really strange move considering the game’s chucking crafting materials and new suits at you every time you enter a building. And if it does, here’s my second easy fix – give me it from the start. I’m sure there’s some excuse about how a boost would mess up co-op gameplay, but I’m not buying it – there’s no reason why walking should be more appealing than driving in a city this massive.

It’s a shame that Gotham Knights messes up traversal so much when there’s a ton of potential here. Batman may not be quite as mobile as Spider-Man but the Arkham games proved that moving around with a grappling hook and cape could feel great. Knight then added in the Batmobile and, aside from the awful tank bits, made getting around Gotham City as Batman even more immersive.

Now we’ve got Gotham Knights with its clunky movement and the only vehicle in gaming memory that I’d rather walk around than use, and it feels like such a huge step back. I can forgive Gotham Knights for killing Batman, but I can’t forgive it for slashing the Batcycle’s tyres.